The game first teaches you the movement and tools. Oh, and what glorius controls these are! You can use a controller but I found this to be one of those games where you need accuracy, and the right-stick just doesn’t cut the mustard, you need the mouse for accurate targeting. WASD to move, spacebar to jump and tab (or 1234) to scroll through your four mouse-activated tools, which are: Build – set a ‘seed’ block and then extend more blocks from it in any direction – this is by far the most widely used; Cut – mouse wheel to rotate angle of cut and hold to increase length; Push – rarely used; Clean – remove blocks, hold to increase cleaning area. 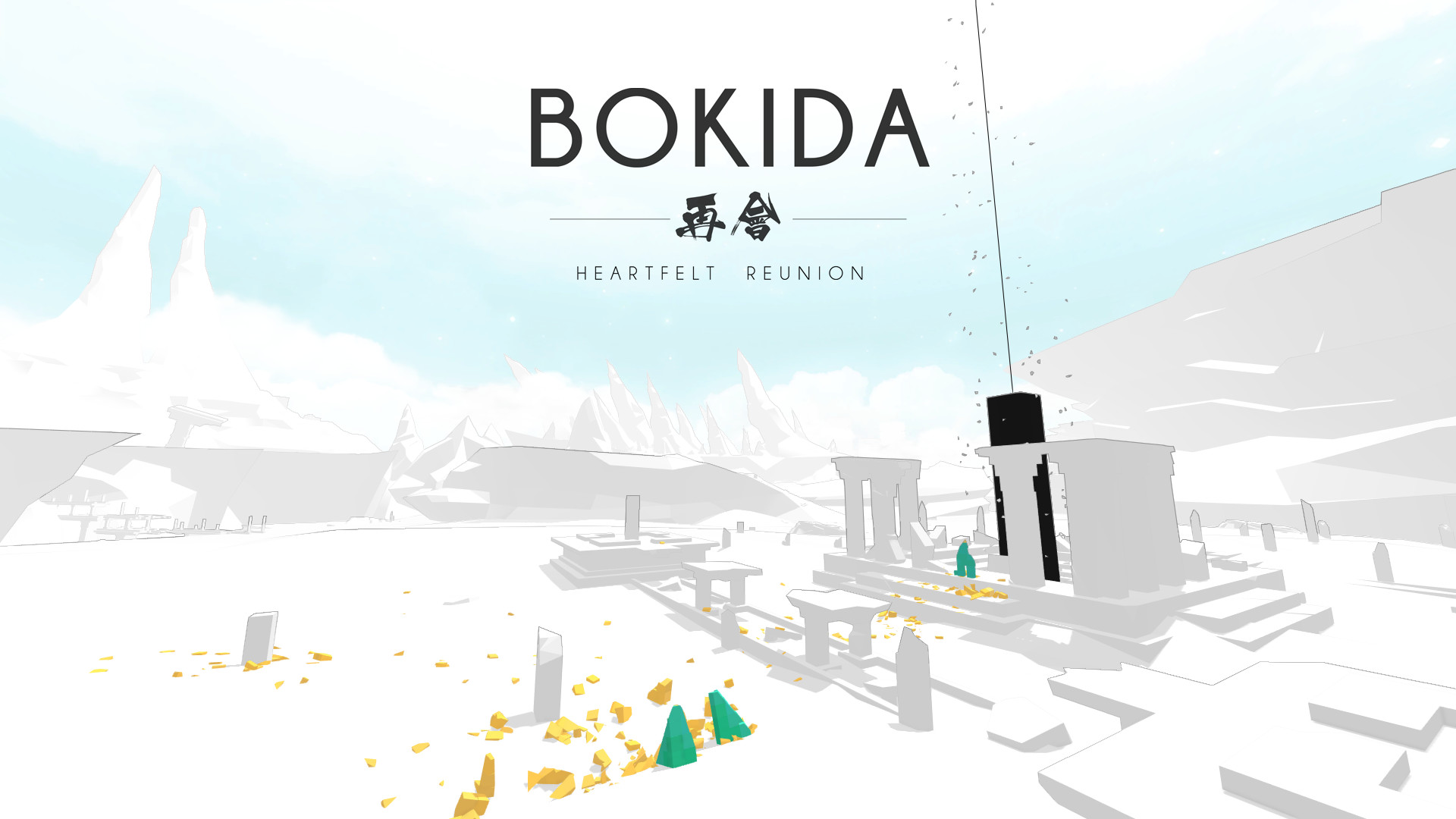 The game makes you feel like Superman, as if anything is possible. There are huge mountain peaks which seem impossibly steep but as long as there’s a slight angle you can bound up them like a mountain goat and when you reach the summit the world is laid out beneath you, all the better to spot the next black orb to collect. You then leap from the summit and glide through the air to home in on your ‘prey’ like a hawk. You instinctively seek out tall poles and land on the tip, giving you the best all-round vision of the scene below, just like a bird would.

I while ago I played Fumiko! which has a similar concept but I found the controls to be a bit vague and frustrating at times, not being able to accurately pinpoint landing spots or gauge distances properly. Bokida is the opposite. You can effortlessly land on the tiniest target, instinctively know whether or not you have enough height to make that ledge, and generally feel like you’re in total control of your spatial awareness.

I’ve never played Minecraft, but as I understand it the building mechanics are similar. The first, and most common usage is to climb vertical walls. You stick a block on the wall, and then extend it to make a small platform (or you want to show off – to yourself, I guess – you can use single blocks), then repeat up the wall to make a ladder and hop from one step to the next to reach the top. Watch out though because, as with real mountains, the vertical walls are not always flat, they bend in various directions to make your jumping and block placement that little bit trickier.

In some cases you don’t need to stick your ladder to a wall, you can simply create a vertical ‘pole’ and add platforms to it as you go, to climb straight up into the air. Your instinct in this game is to always try to gain as much height as possible.

The Cut/Push tools I must admit I haven’t used much, but there are certain areas/puzzles that require them so they’re not totally useless. The Clean tool is mostly used for removing accidentally-placed blocks when you’re creating a structure, like the eraser on the end of your pencil.

Your Build tool also has another usage – you can target a distant block and pull yourself towards it with right-click, which can sometimes be useful for delicate landings, and again, there is a specific puzzle that requires extensive usage of this.

All in all, these tools give you the feeling that your imagination is the only limit to what’s possible. Total freedom. 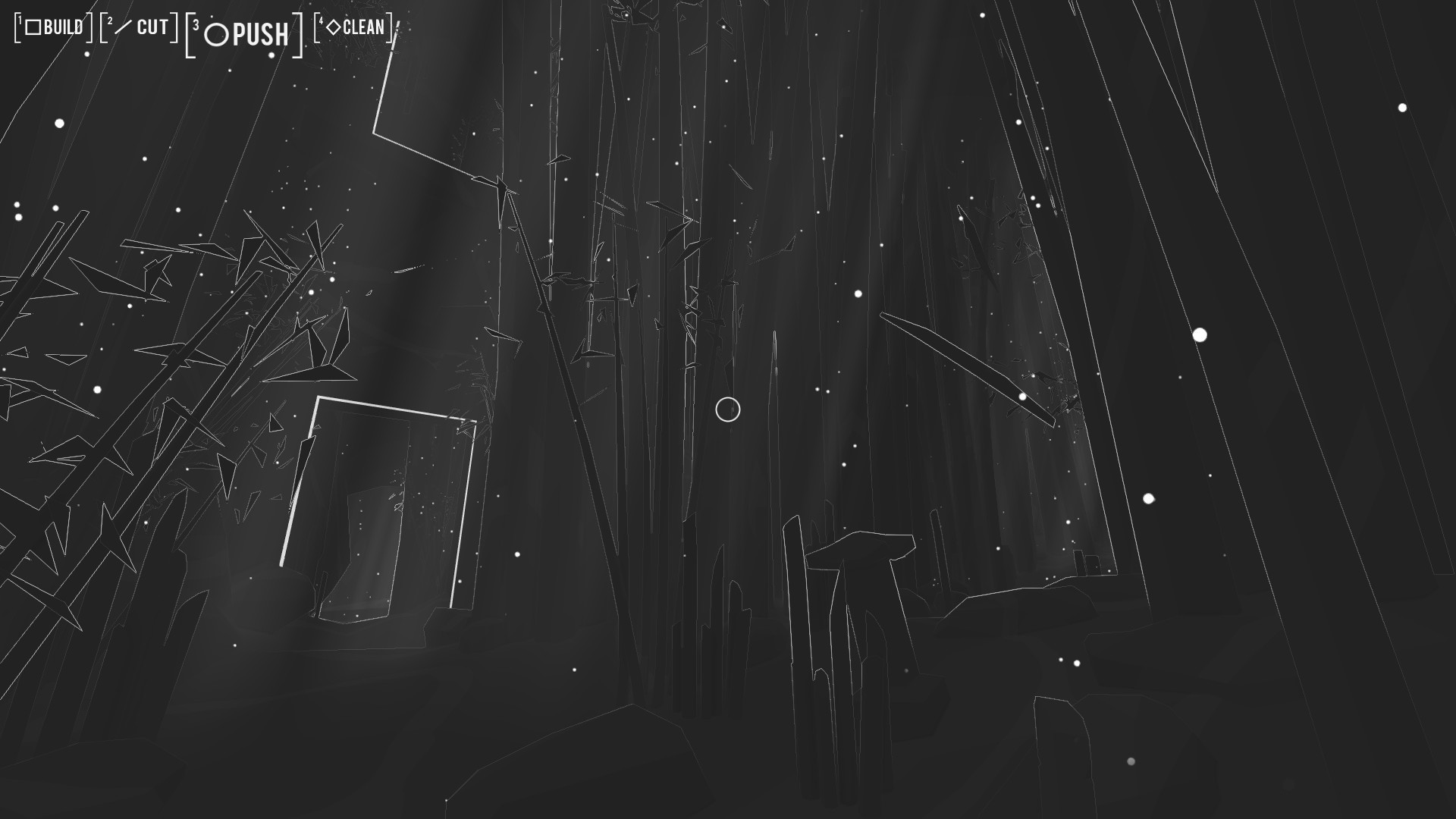 The first aspect of the puzzles in this game is to actually find them and identify them as puzzles, this is not always obvious. Once you realise that you’re supposed to do something, the next task is to work out which mechanics you’re supposed to use on it and then, finally, solve the puzzle. It has an open, real-life feeling to it.

There are three types: 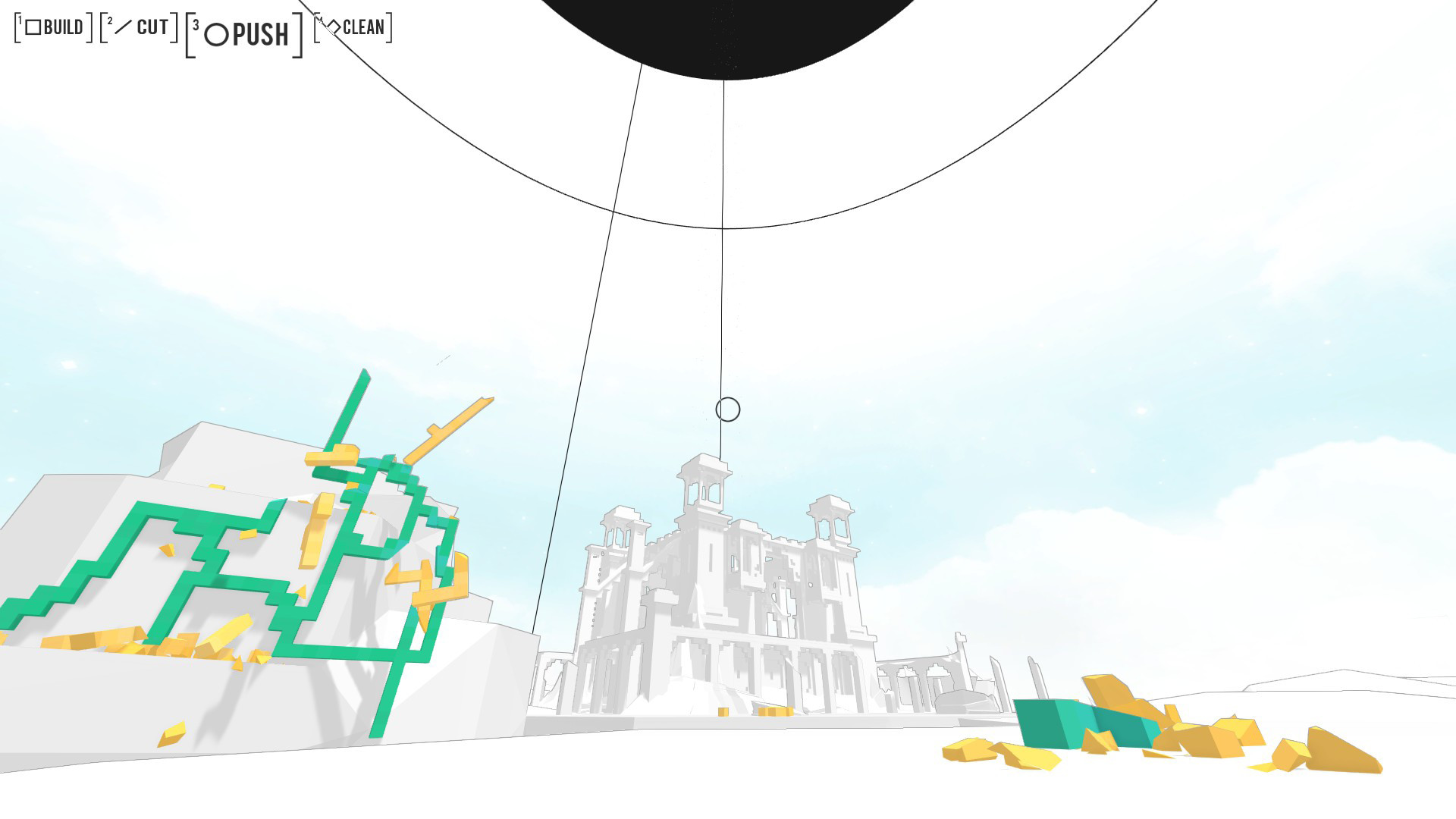 A huge circle dominates the sky, a long cable hanging down from it with a rectangular object on the end of it (and later on, further cables to mark completed Monoliths). For a while I was wondering what this was for. I tried cutting it; I tried pushing it. In the end I realised that it’s the marker of the centre of the world, so wherever you are you can get your bearings and always know where the centre is. It’s good, but it could be better…

I would like to also see not necessarily N/S/E/W compass directions, but at least some kind of direction labels. You do get to know the world up to a point, but the monochrome aspect does not make it easy to remember landmarks. Ideally, press M for Map would be great!

Another slightly annoying feature is the way that the names of areas are displayed as you enter them – Observatory; Gully; Twin Peaks; Temple; Lagoon etc – but the name only lasts about 10 seconds before it fades out? Why is that? I constantly forget where I am, I want to see the title there all the time please.

It’s a monochrome world of greys and whites but beautiful nevertheless. The light and shadows not only look great but also serve a practical purpose, to enhance your depth perception for judging your landings. Occasionally a puzzle solution will treat you to a brief splash of colour, for example bright, low-poly fish swimming around.

There has been talk of slowdowns when there are too many blocks used in the world. There is a ‘clear all’ function to solve this issue. However, I have 8Gb RAM and had no problems whatsoever in a world crammed to the rafters with my endless block structures. I even checked my RAM usage now and then to see if my mega-buildings were having any effect on my RAM. Nope. Nothing of the sort.

I have a 1920×1200 monitor and when I first played Bokida I was delighted to see that it filled my screen properly. Somewhere down the line it stopped giving me that as an option and now I’m down to the standard 1920×1080 – this may be my fault somehow, but thought I’d mention it.

In general, 90% of game music annoys me. Even some supposedly relaxing tunes. Bokida is in that 10% that I can listen to endlessly. It’s pleasant when I focus on it, but it also easily fades into the background when I’m concentrating on a puzzle. I don’t know what that elusive recipe is, but Bokida has it.

There are marked stones dotted around the world which display 2 or 3 mystical Chinese sayings. They don’t seem to be clues or story progression although I could be wrong. For me they add a bit of passing interest but nothing more. 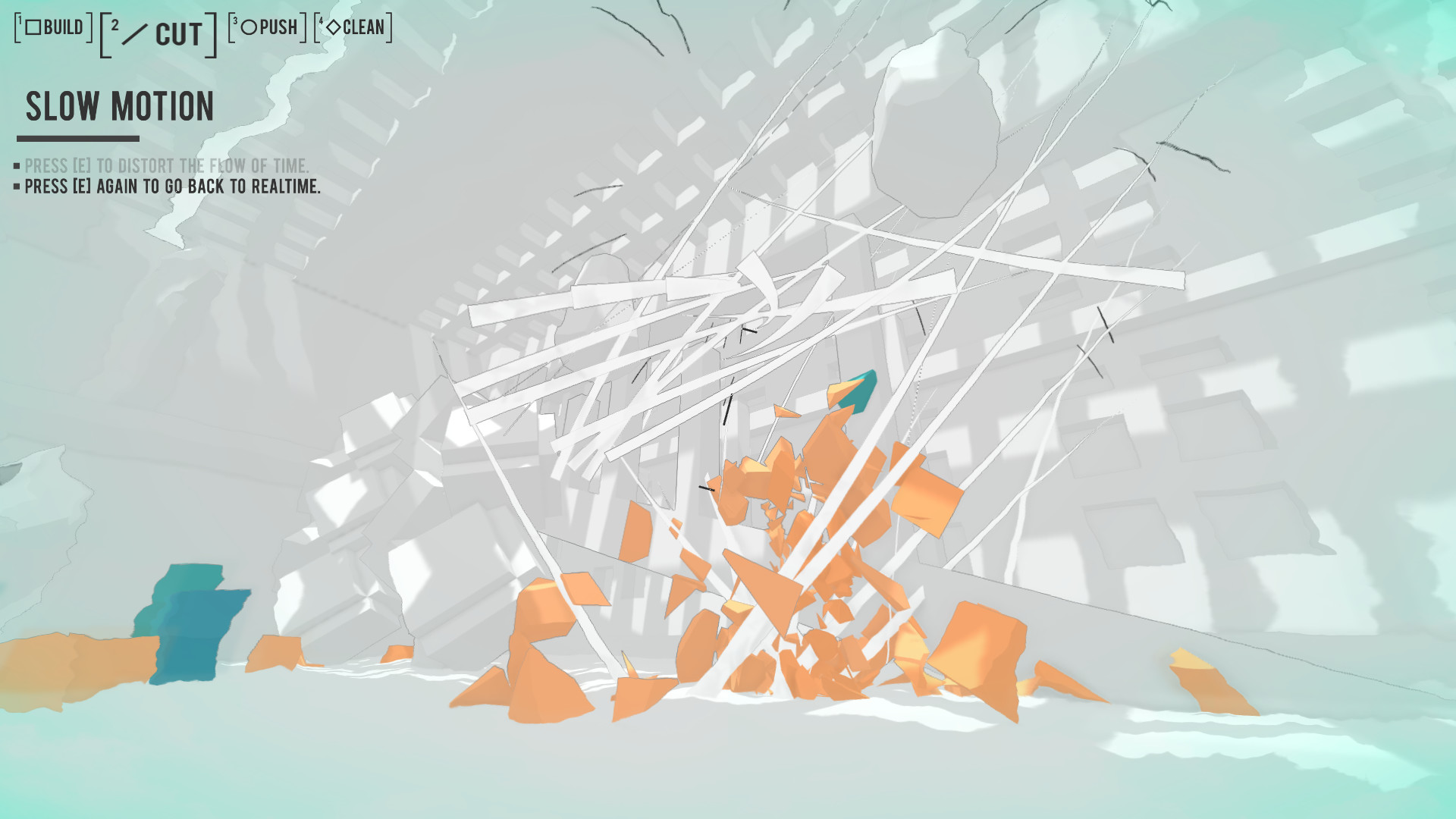 The general movement and climbing aspects are skills that improve with experience and it’s a gentle, enjoyable learning curve. The puzzles have huge variety and are very engaging, with medium difficulty. The solutions can often be reached in many different ways, you can build them in a free-form manner any way you like. The solutions give a lot of satisfaction and you can stand back and admire your work afterwards, while smoking your imaginary pipe and leaning on your imaginary spade.

Achievements are mostly ones you have to chase after, which is good. Trading cards available if that matters to you. Steam Cloud, which will be especially useful for me when Linux support is launched, which is promised soon.

Some may argue that it’s short, but those are people who make a bee-line for the end. There is more than enough content here to justify the price if you spend the time to look for it. Just messing around sandbox-style could fill many hours for me.

Even before I started with any of the challenges, I already found this to be a wonderful experience, climbing peaks, soaring through the sky, building/destroying structures and generally having a whale of a time. Once the novelty had (slightly) worn off, it was on to the thrilling task of finding orbs and solving puzzles.

I review many games, and usually I play enough to experience all the main aspects of the game, write my review and move on. I’m enjoying Bokida so much that I’m lingering with it and neglecting my other reviews. Naughty but nice.