Dungeon Souls is yet another rogue-like dungeon crawler with retro pixel graphics. So, how does it fare?

The game doesn’t provide you with any plot information or character background, and the Steam store page is equally lacking in game lore, so I guess the developers figured a story wasn’t that important.

In Dungeon Souls, you take control of one of a selection of heroes and test your might against hordes of dynamically spawned foul creatures across a series of procedurally generated levels, always keeping one step ahead of the evil of The Redeemer.

Dungeon Souls takes the all-too-popular route of ‘retro’ pixel graphics and, although they’re mostly quite nice when they’re still, there’s way too much going on when things get busy, making this a very poor choice indeed. “Visual noise” is one term I’ve seen someone else use when referring to this game, and it is a perfect description of Dungeon Souls’ graphics.

Enemies are hard to distinguish from blood splatters or other cosmetic effects, trap markers or spike traps can too easily be hidden by other visual elements, and the rapid-fire attacks of many of the later enemies floods the darker levels with high-contrast visual clutter making it hard to focus on anything else. I’ve died more often to objects or enemies hidden by this noise than I have to any lack of skill on my part, and that’s extremely frustrating.

There’s obviously been a fair bit of effort spent on the current graphics, and some of the effects are actually very good for that style, so it’s a shame that so much clutter prevents players from appreciating the art. It’s also a shame that the developers didn’t choose a much crisper visual style instead of the pixel art, because Dungeon Souls would have been a much more enjoyable game if they had.

There’s also an issue with full-screen mode and widescreen formats, such as 1920×1080: the game’s visuals are designed for 4:3 aspect ratio, so anything other than that ends up with the game area only taking up a portion of the screen, with the remainder being filled in with solid black. 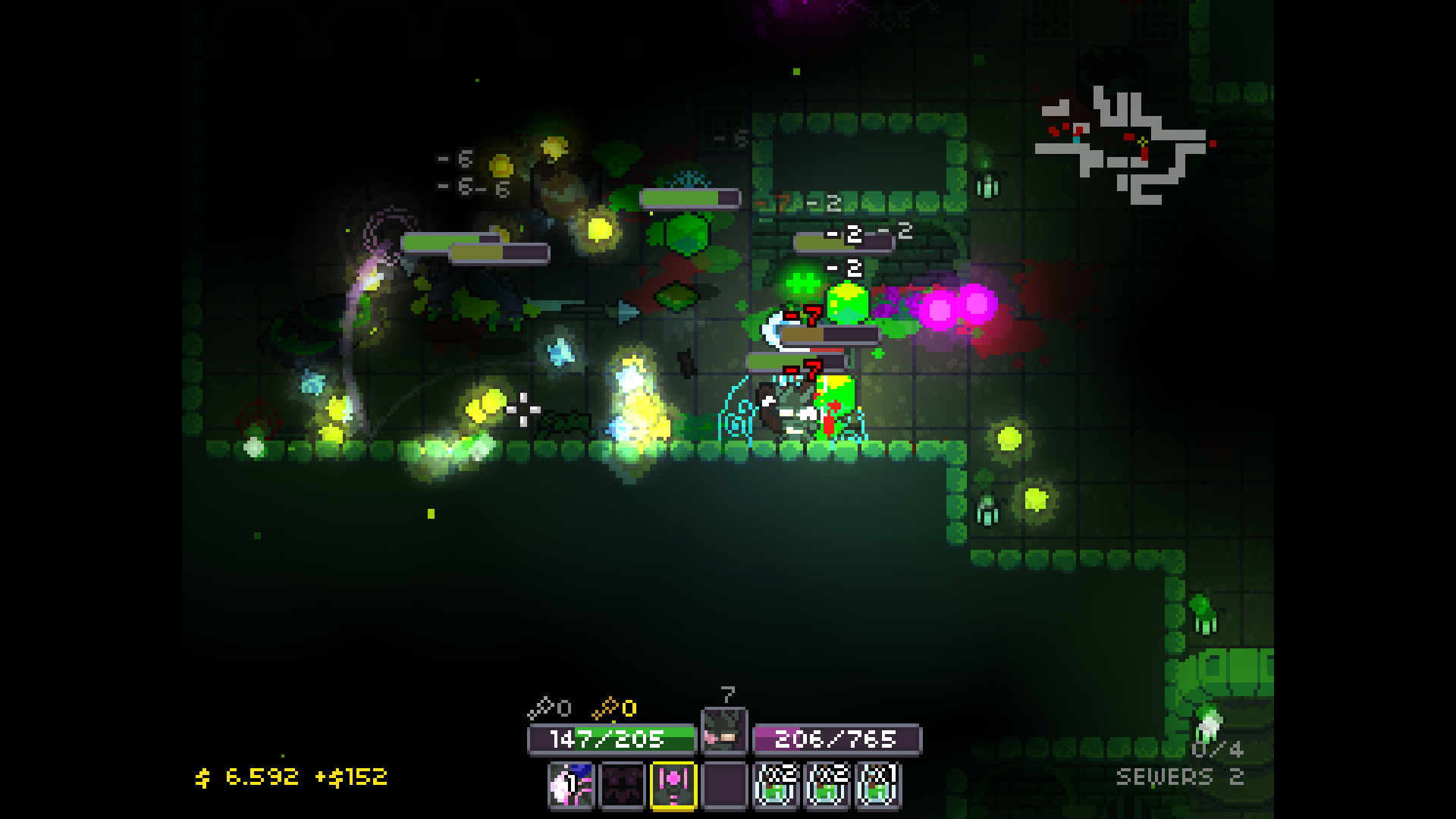 Music is fine, with a nice title theme and a retro sort of vibe in game that suits the genre, and sound effects are similarly retro, but good.

Spoken voice is limited to boss fights, and it’s pretty bad; the game could have done without it entirely.

The game provides a very brief tutorial, which explains the basics of the gameplay. Wielding either keyboard and mouse or controller, you pick a character from the initial selection available, bring it to life by pressing space bar, and begin your adventure in the Dark Dungeons.

Each character has three starting attacks or abilities from which to choose. The first, a basic attack, is always unlocked. When you start you have one skill point to spend on either enhancing that attack’s power, or unlocking one of the other two abilities. As you gain levels, by earning experience from defeating enemies, you’ll either earn points to spend on your characteristics or further ability levels, so within a few minutes you should be able to unlock all three abilities, if such is your desire. You also have an inventory of passive items and a small potion inventory with three stackable slots.

Your goal on each procedurally generated level is to unlock a set number of ‘gates’ (I’ve seen between two and five per level), and then get to the portal before The Redeemer — a seemingly indestructible and huge creature that sucks your life away — catches you. Gates are unlocked by walking over them, which spawns an array of creatures around it all at once, while the portal is entered by running over it and pressing a pre-defined button or key. But watch out for traps, many of which can kill you in one hit, at least when you’re starting out. 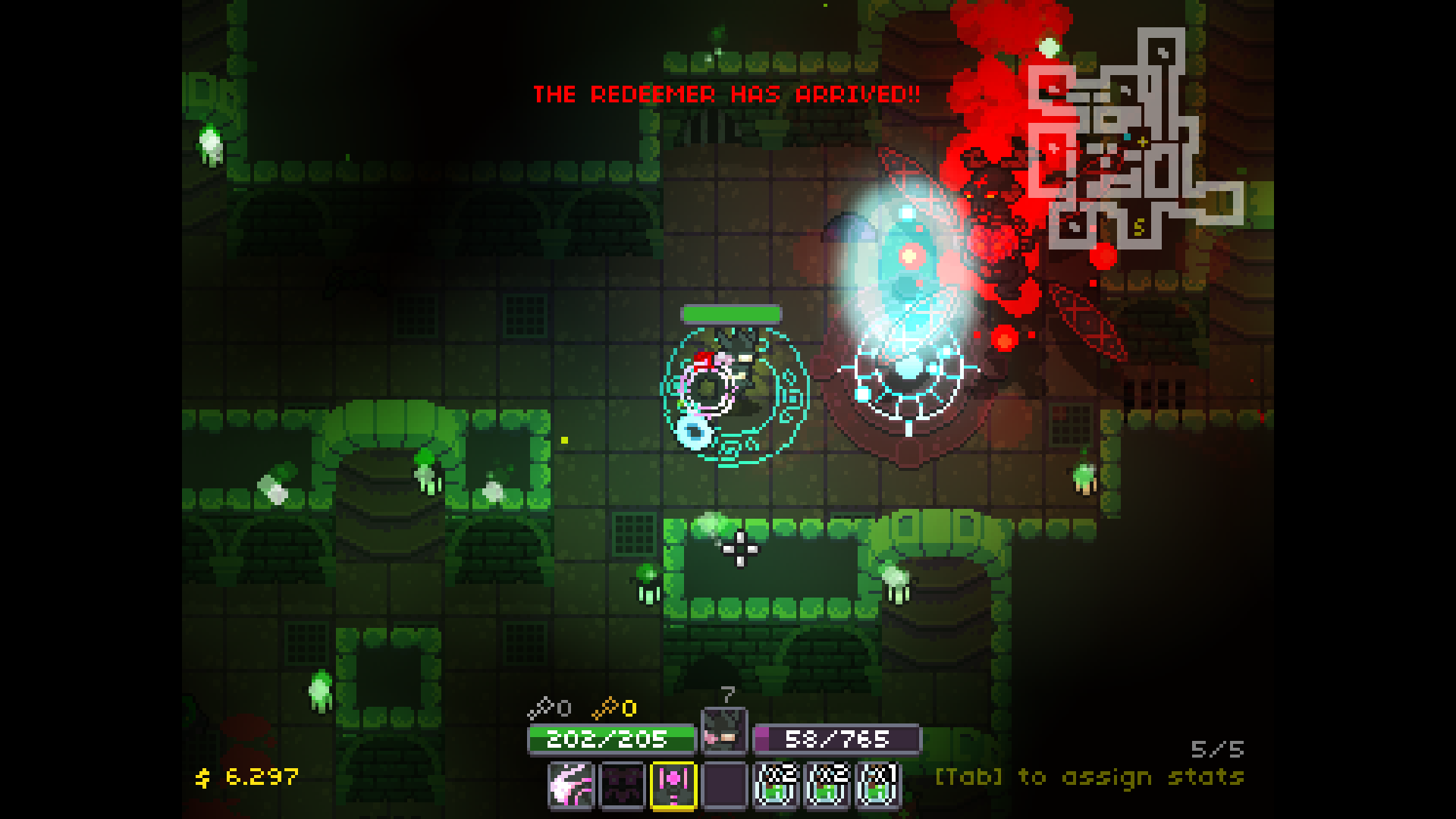 Every few levels you finish the themed ‘stage’ and encounter a boss. Destroy the boss and you can enter a portal to the next themed stage of levels, and so on. The graphics on each stage are unique, with different groups of spawning creatures, all of which generally looks good for pixel art. But as mentioned earlier, as soon as the action starts, it becomes way too messy and hard to see what’s going on.

There are some other intricacies, too. Coins and resources are collected from killing monsters. Coins can either be saved until you die, allowing you to buy passive improvements for all future characters, or they can be spent at the in-game shops on one of three random passive items for that play through alone. It’s a trade off, and your choice will usually depend on what items are available in the shops you discover. There are also items available to craft or forge in the Astral Forge (from the main menu) using collected resources. Recipes for these are hard to find (at least without a guide), and they’ll set you back a large amount of coins as well, but they remain available for all future characters, so they can be a great boon. Extra characters can also be unlocked by performing various in-game actions. Oh, and there’s apparently local co-op multiplayer, too, but I haven’t had a chance to try it. 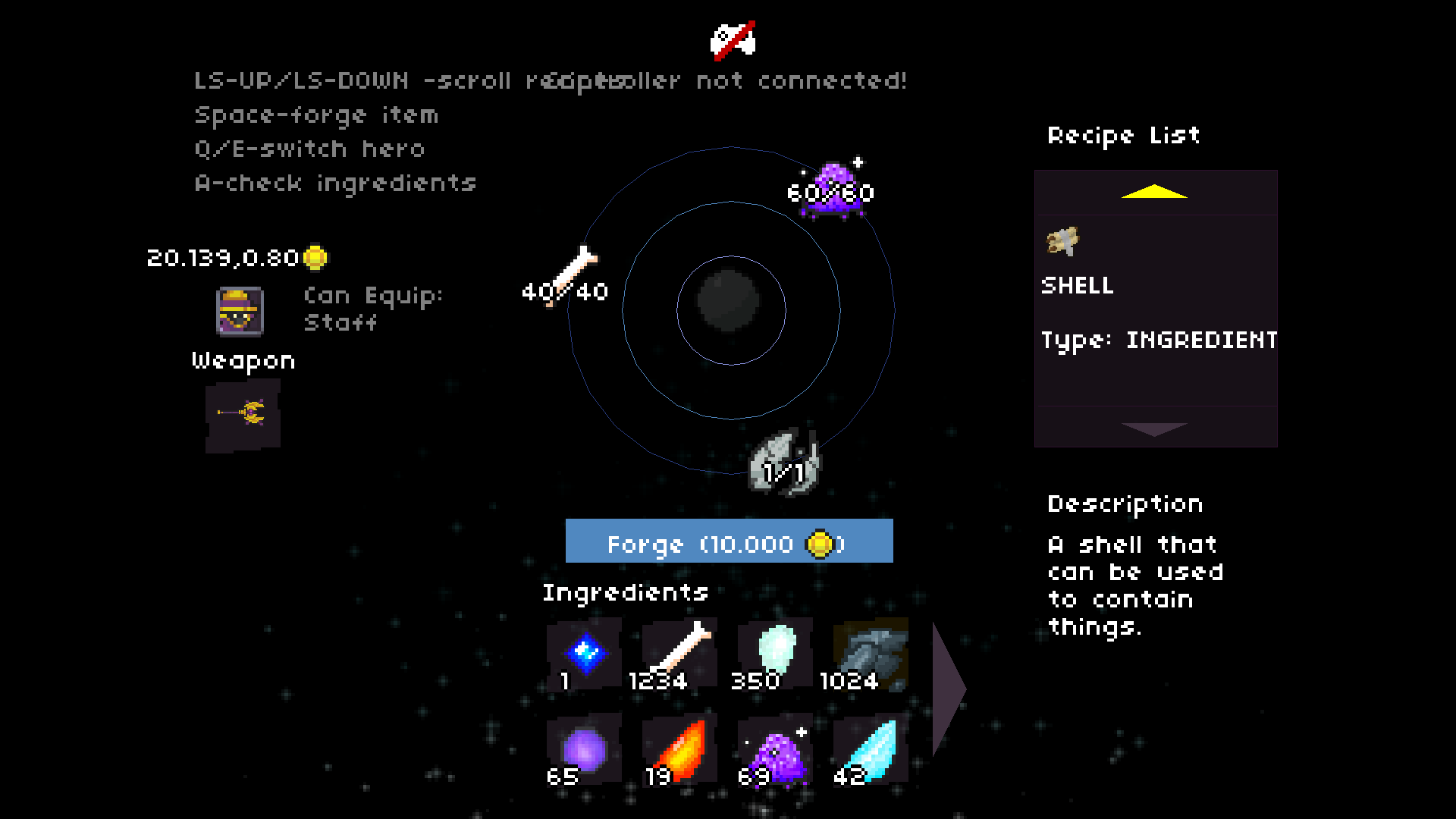 Controls are relatively standard for twin-stick shooters and are mostly configurable. I tried both keyboard and mouse and controller and neither felt quite right. The reason for this is use of the three abilites. The game lets you assign one button for your primary attack, with is always the first ability. There is then a second button for your secondary attack, but you have to use yet another button or two to choose from your other two abilities and assign it to the secondary attack before you can use it. This means that, in the heat of battle, you’ll basically only ever use two of your three abilities because swapping between the second and third is too slow and unwieldy. If only the developers had let you assign three buttons, one each for the three attacks, this would have been avoided, and developing your character would have been much more satisfying.

Even with the tutorial, Dungeon Souls does nothing to explain what any of its intricacies mean. This is somewhat standard for rogue-like games of this type, which like to reveal functionality as you play, but Dungeon Souls takes it a bit too far. For example, the significance of the red variants of enemies, crafting and forging, shops, items, traps, and even the plot-related concepts of the gates, portals, and The Redeemer are all left to the player to discover.

Cons:
– Pixel graphics cause too much clutter
– A couple of problems with the controls
– Doesn’t use full screen width in widescreen modes

Dungeon Souls is a solid and enjoyable rogue-like dungeon crawler / twin-stick shooter hybrid that is fun and addictive. The unlockable characters, permanent passive improvements, and crafting, not to mention the huge range of collectible items to find in game, should keep you busy for quite some time, but the graphical and control issues mar would would have otherwise been a truly excellent addition to the genre. 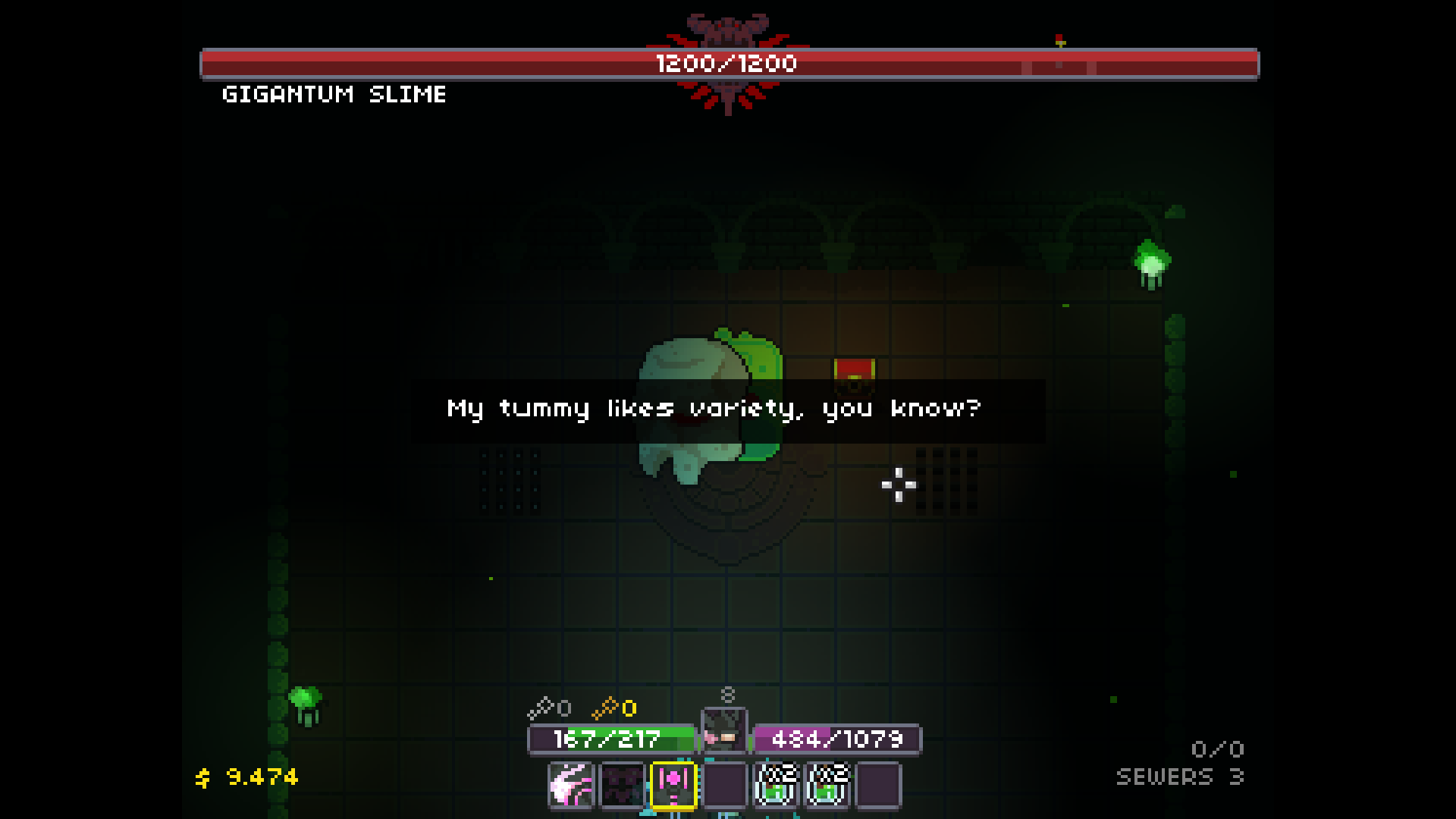