Playtonic has finally delivered their hugely successful kickstarter game. Is it a poison chalice or sweet sweet red wine?

Banjo Tooie was released 17 years ago. Other notable games released in the same year included; Diablo II, Deus Ex and Perfect dark. Black books and Sopranos were on the google box and Groovejet was in our ears. It all seems so far away. A distant memory of a simpler time.

Fast forward 15 years. Ex Rare devs Playtonic announce a Kickstarter campaign to fund a new retro-influenced 3D Platformer. I jumped at the chance to see what the team behind Nuts and Bolts ( a criminally underrated Xbox title) would conjure up next.

The pitch was simple. To create a successor to the Banjo series. Sticking to a rigid design brief, The game would be faithful to the previous titles. A buddy duo adventure set in a colorful 3D world, full of collectibles, quirky characters, and arcade machines. 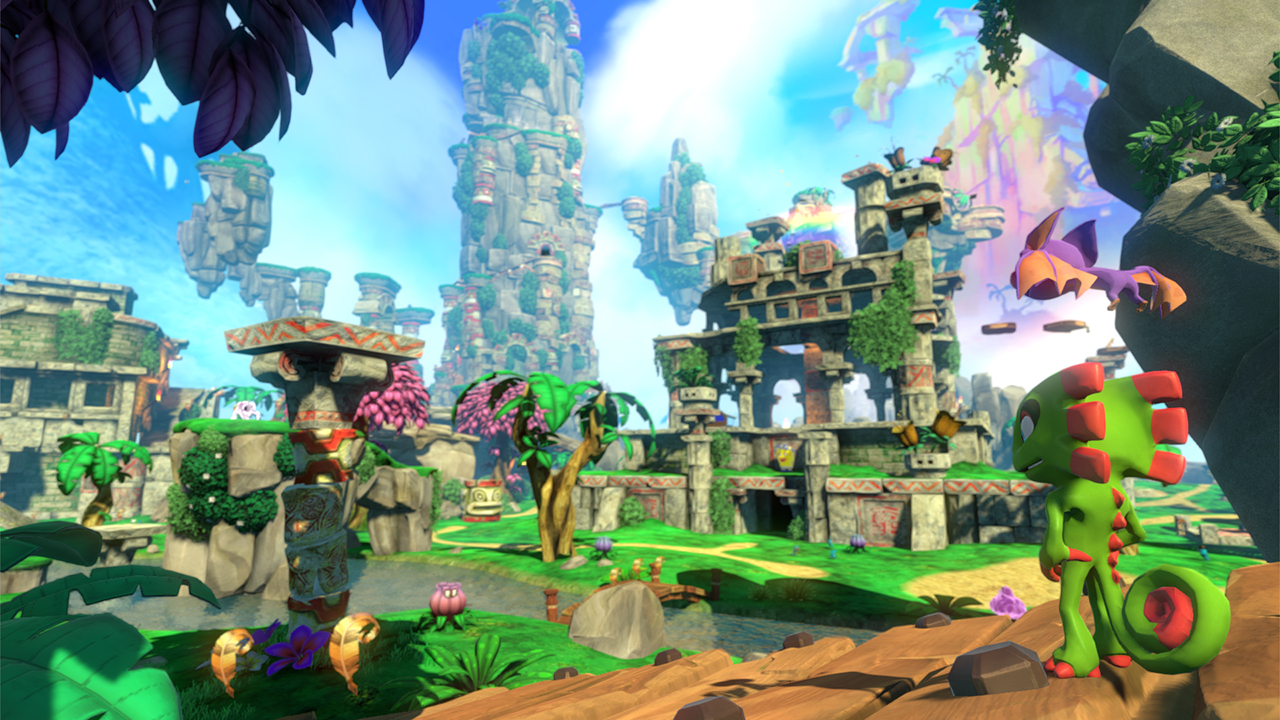 Yooka Laylee is true to its roots. There’s no hand holding in this game. No map, no quick save, no GPS or checkpoint system. All the QOL (quality of life) features that some younger gamers might come to expect are missing. The game is brutally retro. Once the initial story and introduction area is completed, the gamer is left to their own devices to explore the first vast open area, that is Tribalstack Tropics. This is what the ex Rare folks excel at. Vibrant world design. No gritty muted colour palette atheistic here, just a joyous riot of retina burning hues, set in a tropical Mayan-themed play area.

Capital Cashino is another standout in both world design and texturing. Set in a tacky Vegas styled casino, filled with all manner of roulette tables, slot machines, Pachinko machines, and card tables. The area is a visual treat to explore. Everything is oversized, from the massive dice to the playing cards. It kinda reminds of a classic Micro machines level sans racetrack. There are 5 worlds to unlock and explore in total. These are connected by Hivory Towers which serves as the main hub. It is a factory and business owned by the evil supremo, Capital B. 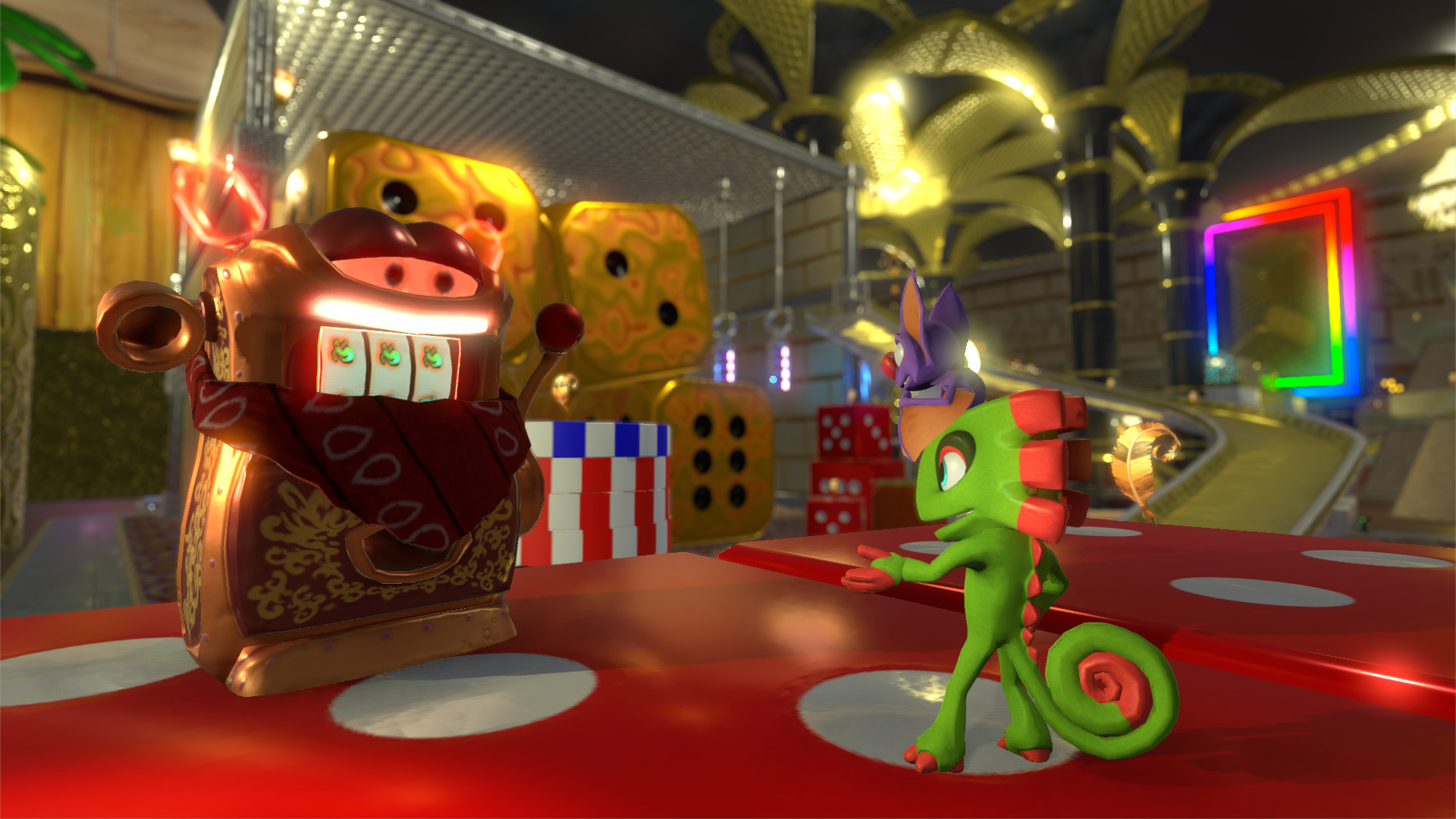 Playtonic called on a few old friends to create the soundtrack. These weren’t any johnny-come-later piecemeal musicians but none other than Grant Kirkhope, David Wise and Steve Burke. Veteran composers for the likes of Donkey Kong Country and Banjo-Kazooie. Their combined efforts result in a jaunty, typically british, cavalcade of end of the pier style tunes. These will either amuse you or slowly grate depending on your musical sensibilities. The same could be said for the characters voiceovers. Which in another nod to keep everything within the game’s scope retro. Are a mixture of gibberish, gobbledygook samples. Players with a low threshold for annoying sounds, will be soon reaching for the mute button.

Given the devs past history. The controls are tight and precise. This is essential due to the nature of the game. Some of the harder to gather collectables require pinpoint accuracy in order to hoover them up. In fact, the whole game hinges on finding collectables. These unlock both new worlds and new skills. If you’re not a fan of this kind OCD inducing gameplay, then Yooka is definitely not going to blow your socks off. It’s more likely to result in you throwing your controller out the window, with its “balls out” hard, difficulty spikes. 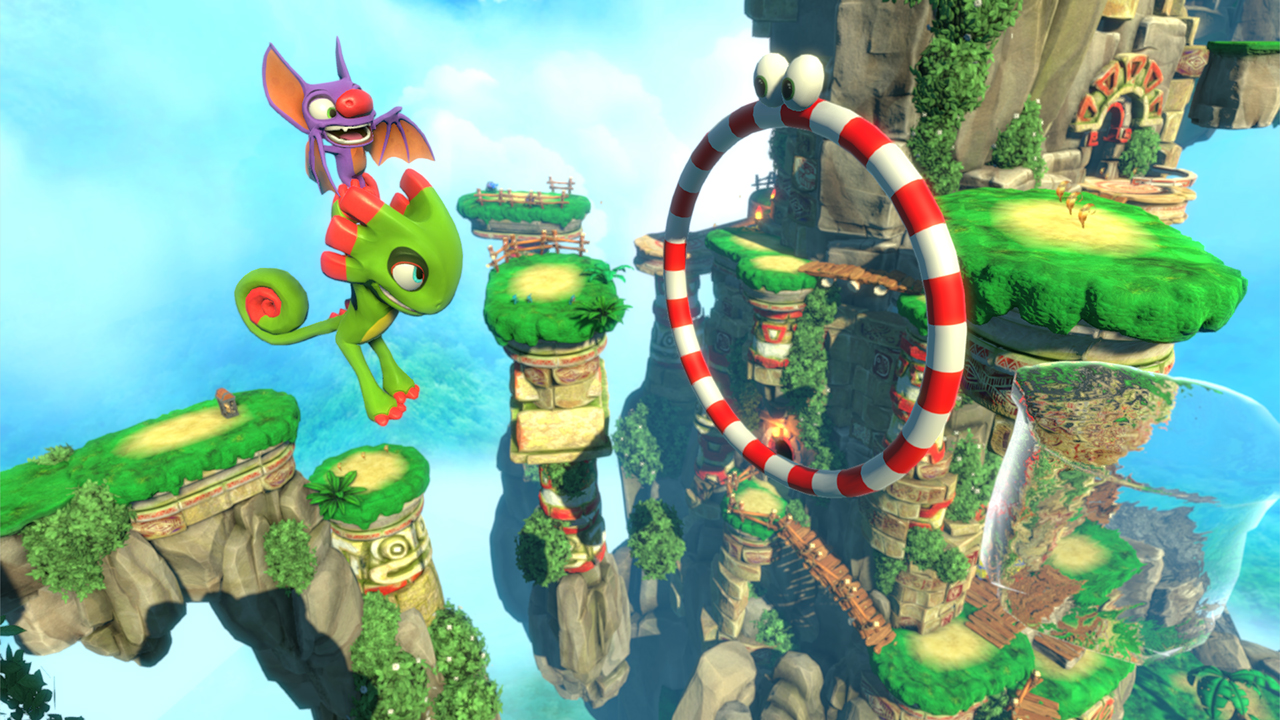 I’ve never played a game that has so rigidly stuck to a design document. Kickstarter backers cannot complain that the initial vision and pitch hasn’t been delivered. This is both the game’s blessing and curse. Anybody who actually played any of the N64 platformer classics will feel right at home and enjoy a rich slice of retro gaming goodness. Anybody new to the series or too young to have any experience of what an old school 3D platformer entails, will be frustrated by the game’s quirks.

I read with interest Jim sterling slam the game in his recent review. It’s blatantly obvious that he was never a fan of the old games or any 3D platformer. Even citing the awesome Mario 64. This is akin to a blinkered death metal fan reviewing Ed Sheeran’s latest “opus”. His frustration in both the controls and game design are exactly what I want from a game. No hand holding, no linear path. You are free to explore the game in any way you choose. You want to tackle one of the bosses without any power ups, go for it. You want to hunt out every hard to reach quill, be my guest. I enjoy the open free form gameplay. I like to tally atop a great Mayan tower and take in the view. I enjoy jaunty silly light-hearted tunes to accompany my adventures. Yooka Laylee is preaching to the converted. It’s a riotous joyful blast from the past.