Set in the ancient Greece, Okhlos talks about a time when the Gods betrayed their loyal subjects and became evil, using their powers only to fulfill their goals, reducing the population to misery. In these dark times, a few brave Philosophers decide to unite and stand against the Gods, by inciting the population to fight back. And so, many philosophers around Greece started rallying massive mobs of angry people, deciding to topple the Gods themselves and earn back their freedom. 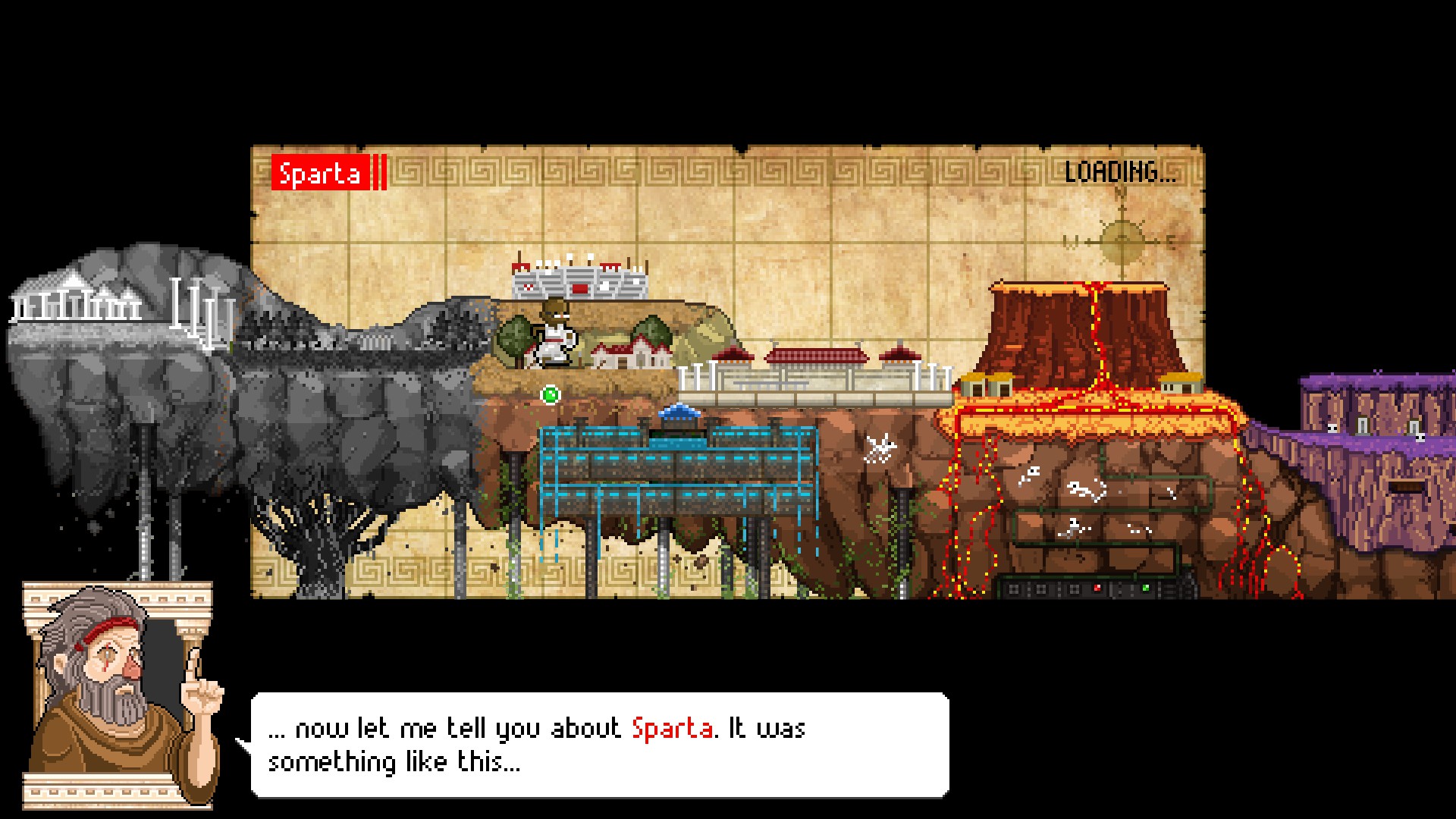 In Okhlos, the player will impersonate one of the many Philosophers (be them named or not) who decided to challenge the Gods. As a Philosopher, you will be able to convince people found around the levels to join you and your Mob, in order to fight the Gods’ armies. The player will be in control of two different things: the first is the philosopher himself, which acts as the commander of the mob, and the Mob itself, which can be directed with the mouse and has only two simple commands, attack and defend, unless you have special portable items that activate on command with 1, 2, 3, etc. keys and produce various effects such as healing or area damage.

The mob will consist of any kind of person who wants to join the fight: you will be able to recruit common folk, noble citizens, warriors, healers, other philosophers, defenders and even animals and special units along your campaign, each with unique abilities. To do so, a philosopher, be it the Commander or another one, must pass near the unit and it will be recruited, as long as the Mob is not at its maximum capacity, which can be increased in various ways. Other than common people, you will also be able to sacrifice part of your Mob to certain Shops found between one area and another, to recruit powerful Heroes, each time you are at a shop the selection will be of 3 random heroes, each having a cost and unique abilities, only one Hero can be taken at each shop. Shop may as well have a selection of regular units to convert in other units, for example you could be able to convert 5 Warriors into 5 Philosophers if you need, or vice-versa.

During your adventure you will face a great variety of foes, each time randomized to a certain degree by the procedural game engine, they are basically of two types, Minions, which are displayed on the minimap by a white skull, and are regular enemies, and Mini-Bosses, displayed with a red skull, which obviously are much stronger than regular enemies and often have special devastating abilities which can seriously endanger your Mob. To defeat such foes, your Mob will need inspiration, which is very important to get your men efficient. On the top of the screen there is in fact a Morale Bar, which can be charged by defeating enemies and breaking props around the map, each level of this Bar will increase your mob’s statistics and efficiency, making it stronger! The bar will deplete over time so don’t waste any and keep up the fight!

Stages in Okhlos are generally pretty short, 10-15 minutes will usually be enough to complete a level, but the random factor and increasing difficulty after each stage will always keep you alert. At the end of each stage there will be a Boss, randomized as well to keep up variety, which usually will be a God. These Bosses have their own skills and attack patterns, timing in ordering your Mob to Defend and knowing each Boss’ capabilities will be fundamental in order to defeat them. Also, a good, balanced mob structure not lacking too much of any statistic will greatly increase your chances to survive.

Before or later you will DIE. If your Philosopher dies and no other Philosophers are present to take his place, it will be game over! But do not worry, as after each playthrough you will proceed a bit further towards unlocking many unlockable Starter Heroes, with you since the beginning, and Named Philosophers with unique skills each, all of these are unlockable with specific challenges, all listed in specific menu found at the Agora, your base. There also will be Cryptos, secret words well-hidden in the game, that will unlock special game modes and bonuses, so keep an eye out. As a roguelike, Okhlos’ key element is replayability, and in this the developers did a great job to keep the experience fast-paced, varied and never boring. 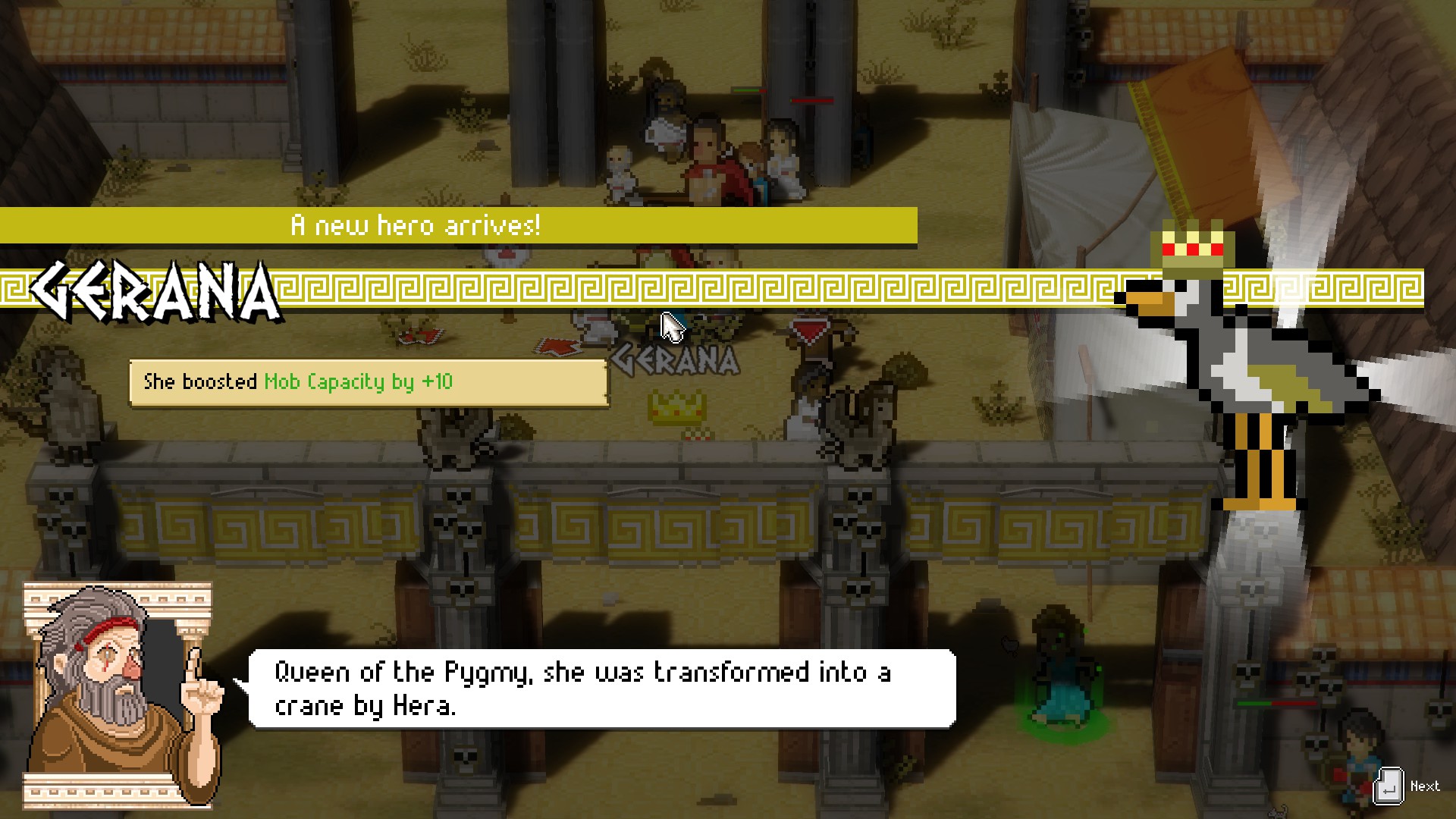 Do not be fooled by appearance, because under the pixelated 2D guise of Okhlos there is very good technical work.

Speaking of Performance, Okhlos runs well and has been optimized decently. Even with massive amounts of enemies and buildings breaking into smithereens left and right, there will be no problems such as stuttering or FPS drops even on not very recent systems, so it is safe to say Okhlos is a game even old machines could run pretty well.

Speaking of Visuals, Okhlos’ graphics style is very peculiar, drawing 2D characters in a 3D environment set in a 2.5D view. All props in the game such as barns, buildings, pots, fountains and whatnot are physical, destructible objects that will beautifully fly away into pieces when your angry Mob destroys them. Same goes for characters to some degree. Behind its appearance, Okhlos mounts a modern graphics engine with all the recent physics and effects we all like.

Speaking of AI, enemies have pre-determined attack patterns, will run away when they are at a disadvantage and will help each other if they have the possibility to do so. A sufficient, standard AI which is fine for a game like this.

As far as the Sound goes, it fits well with the setting and pace of this game. The music reminds of ancient ones, but “remixed” with some electronic, giving it a fast pace which will emphasize the fast pace of the game itself. Effects are all right, nothing extraordinary, but are varied and decent.

There are no major issues or bugs to report. 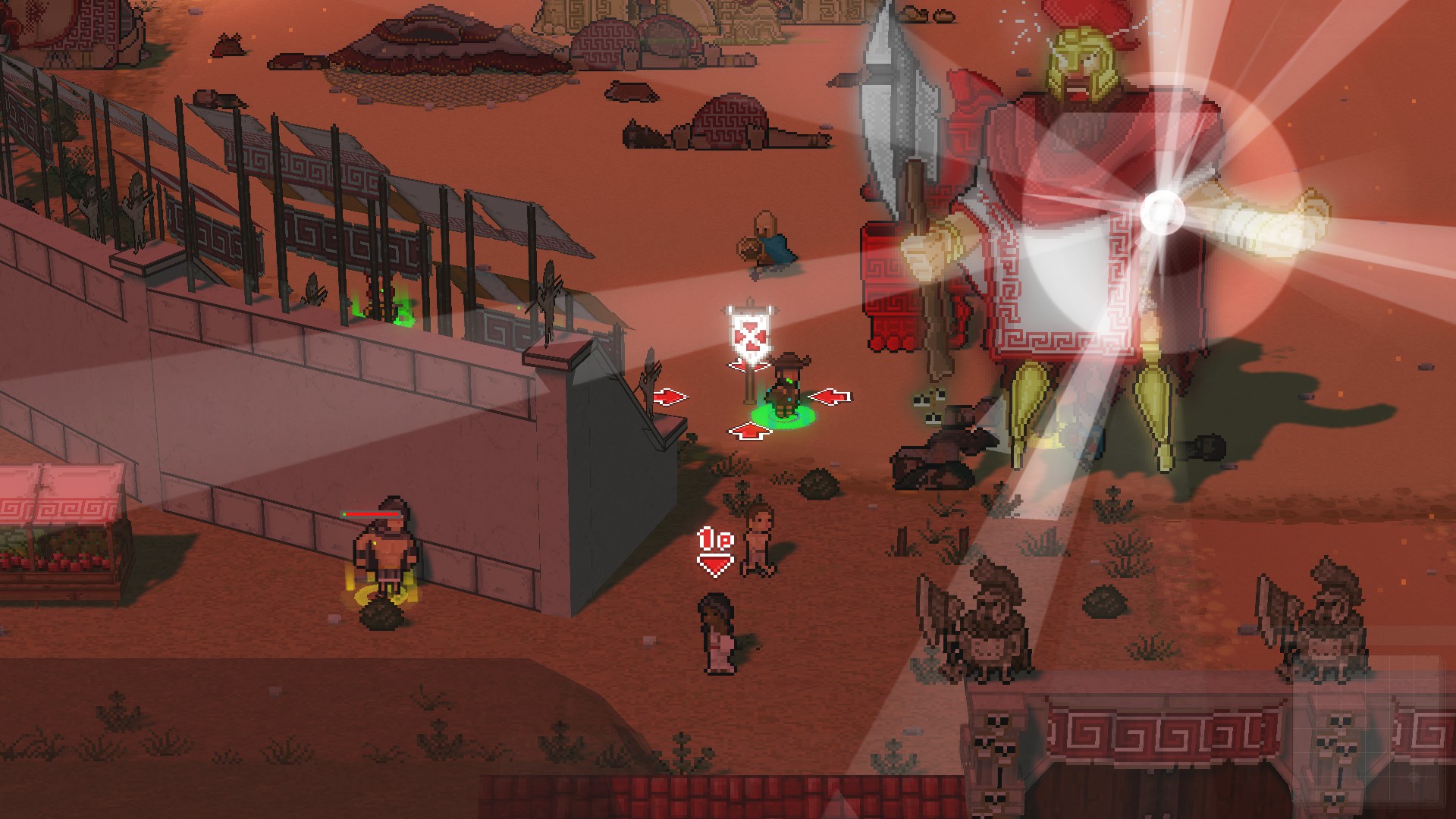 Okhlos is a very original roguelike dungeon crawler, with a lot of style and uncommon mechanics. It will give lots of fun to anyone who likes the genre, and also to novices to it. Each playthrough will be fast and diverse, and overall the mix of elements runs very well. If you are for deep and complex game systems, then this might not be your kind of game, but if you like fast paced madness and violence, then be my guest.