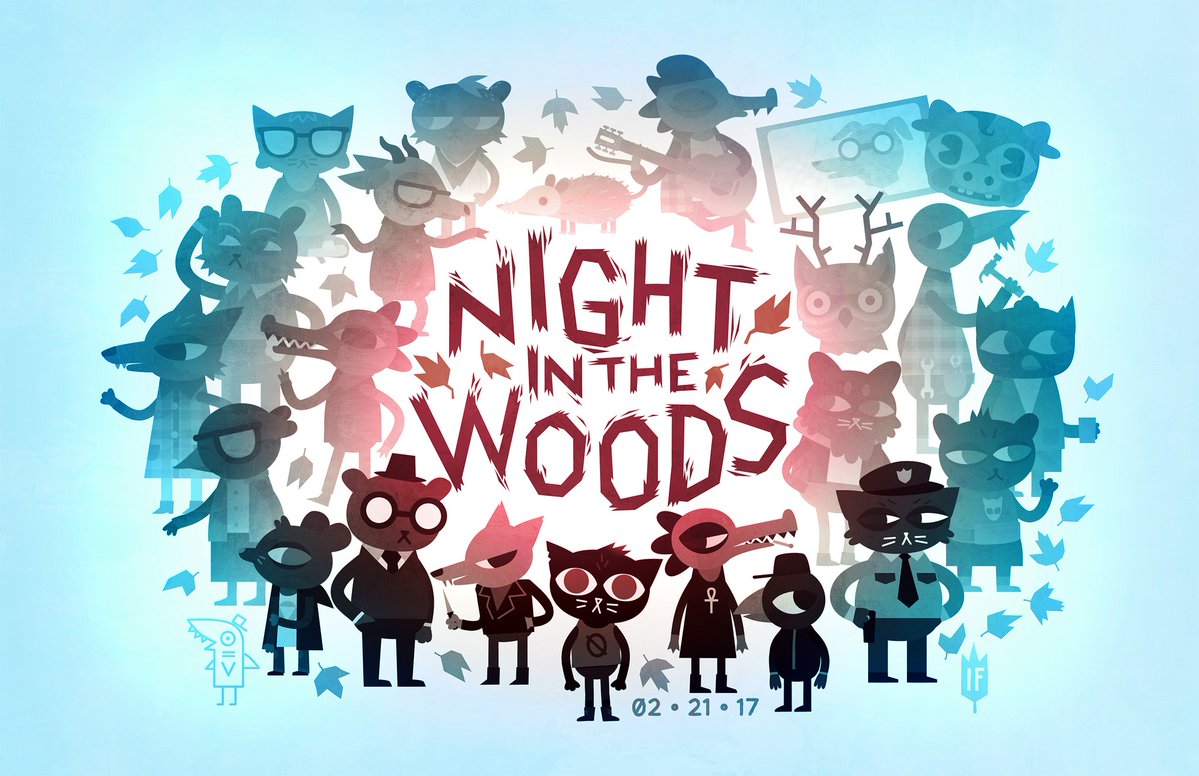 REVIEW: Night in the Woods 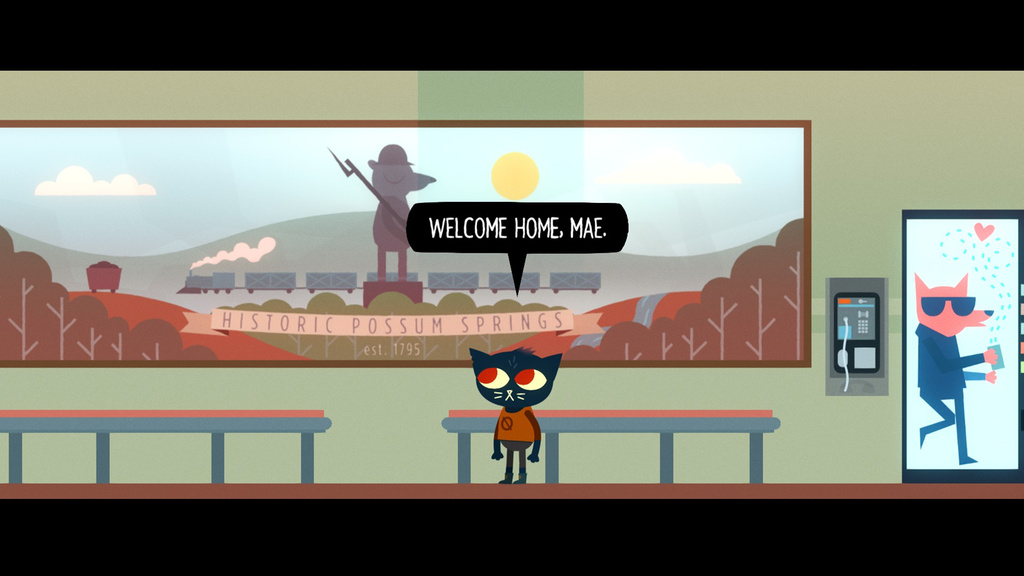 It only takes a few screenshots to see just how much style the adventure oozes. Wait til you hear the crazy premise of a cat dropping out of college and hanging out with old friends. And weird mysteries! What really isn’t there to love the initial set-up already? And then it gets so much better.

As Mae, you run around the beat-down town of Possum Springs, experiencing the harsh realities of being grown-up, while also living her life as if she never did become one. Night in the Woods is the story of a girl who’s anchored in her past because she’s lost all place to truly call safe. Mae’s intentions for dropping college become far more complex and her character grows that much more later in the adventure, going down routes you’d never expect. She comes off as a character who makes tons of mistakes, misunderstands a lot of the world, and might as well be a total asshole. But damn it, she’s such a likable character. I bet that everyone will see a little bit of Mae inside them, and that’s what makes her so special.

Of course, it’s not just Mae either. The entire cast of characters, and even the world itself shine with so much nuance in their stories. Gregg is in a way a lot like me, a kid at heart who in order has to pursue their future has to give up their childhood antics and slave on many obligations in life. Bea is someone whose ambitions and dreams were ripped away from her last second, and her whole relationship with Mae (who abandoned the one thing she wanted the most) is a complicated yet down-to-earth combination. I could go on and on, from Angus’s miserable childhood to the mysterious Germ, there’s so much of Night in the Woods’s cast of edgy animals that I can endlessly blabber about. And the best part about that solid cast is that they’re all placed in a world that screams rural Pennsylvania, embracing what is our very real world. Don’t let the aesthetics fool you, this story is a complex narrative that sets it’s backdrop to the world we surround ourselves in today, and the fact it’s managed to accomplish such a strong and relatable tone while almost looking like a cartoon is staggering. All of this is sold through some of the most realistic dialogue in a game like it. Night in the Woods accepts the fact that us human beings are not going to talk perfectly. We’re going to say the wrong things, we’re going to deliver our words awkwardly, and someone is probably going to spout dumb memes in front of each other because they have nothing to else to say. It can be seen as edgy teen angst cringe, but I can barely see it like that when Mae and friends talk in a similar manner as me and my weird-ass friends do. It’s otherworldly but also right at home. 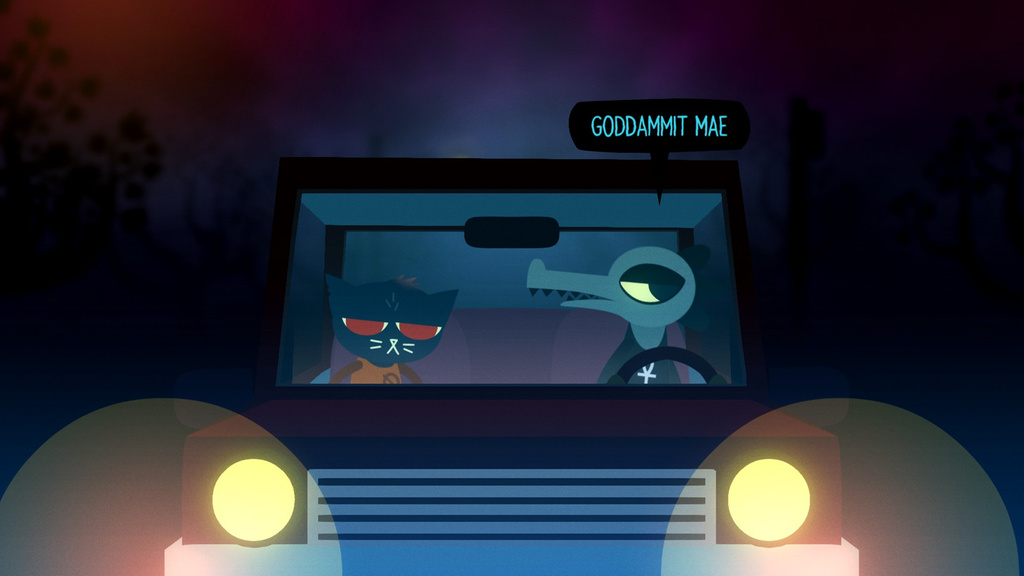 It’s gameplay itself (while isn’t truly remarkable) throws in itself at times to mesh really well with the story. This is one of the best examples i’ve seen of gameplay shaped by narrative with it’s crazy minigames, from pickpocketing pretzels, band practice, to building your own robot abomination is littered all throughout the game. However, most of what you’ll see in your venture back home can easily be missed either by failing to pay attention to it, or choosing to do other things over it. You’re given the option everyday to decide who to hang out with, and there’s no going back on the scenarios you choose to play through. It not only gives the game replay value, but it helps establish Night in the Woods as a piece of fictional media that cannot be experienced or recreated in film, book, or animation. Night in the Woods is a video game, and it succeeds because it tells a story that can only be told so well in a video game.

The presentation is…well do I really have to explain? It’s absolutely wonderful, with it’s spunky soundtrack, wonderful visuals, superb sound design, and huge signs of polish throughout. The way text is animated, the expressions and animation of the characters, the leaves flying past Mae or the reactive squirrels really help sell the world as a living, breathing one. I’ve been listening to the soundtrack of the game non-stop, and it has to probably be one of my favorite OSTs of recent besides Nier: Automata, OneShot, and 2064: Read Only Memories. The way the instruments all play in each track all feel like the background music of my life, and as an enthusiast for video game soundtracks, that gets a A+ in my book! Oh, and the sound design. The sounds of Mae jumping on all sorts of objects, the engines of passerby cars, and the wooshy (that’s not a word) sounds of wind all feel so natural. 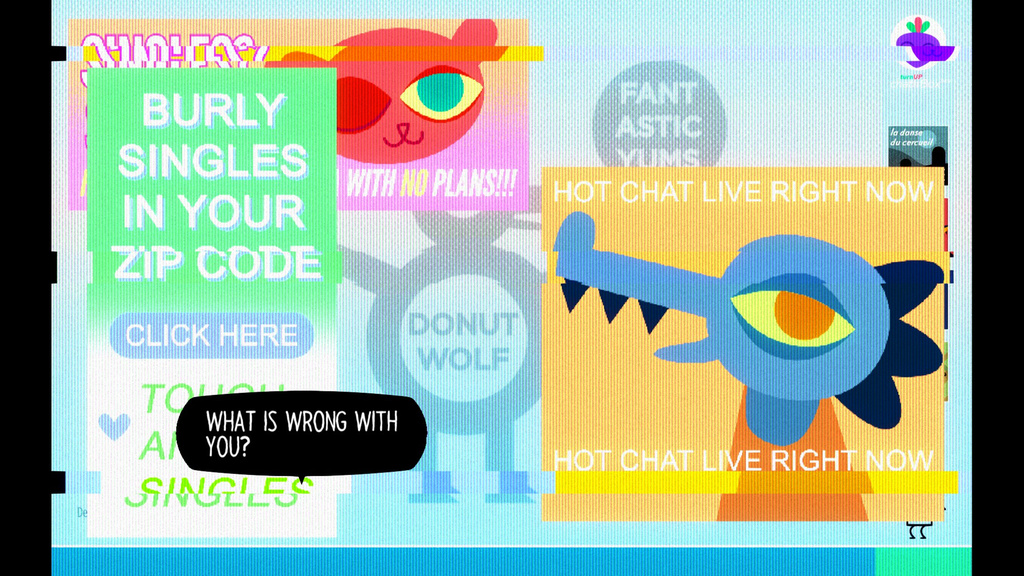 Unfortunately, the game can definitely stump in some shortcomings. For one, I’ve noticed constant audio bugs that’s played throughout the entire game (during dream sequences). Oh, and on those dream sequences, they were fine but not relatively entertaining platforming puzzles, and despite their visuals are by far the weakest part of the game. It also can seem pretty hard for players expecting a huge mystery to really get engaged by the last part of the game, but to me, that isn’t too much of a deal breaker because I got into Night in the Woods playing it for the characters, not for the overarching plot and mystery. Which I mean, I saw coming a mile away. And the twist still kinda was, “Shocking, but well I mean I dunno”.

It also isn’t for everyone. If you’re not willing to put the 6-8 hours needed to play through every single day in the game, then it’s not going to be a really fun time. It’s pacing can be slow to a fault, but it’s hard to see it as one when the pacing perfectly develops the characters at a natural rate. The game admittedly gets pretty repetitive at times when walking from place to place. Any of those problems can detract the experience for some, but it never did for me. Because Night in the Woods is just so awesome that I almost found it hard to write about two paragraphs of anything really problematic I had with the game. Yes, you go and talk to the same friends at the same places all of the time. But no, it never gets tiring. And you’ll probably even come back to play it through it multiple times to see every bit of the game’s wonderful scenarios. 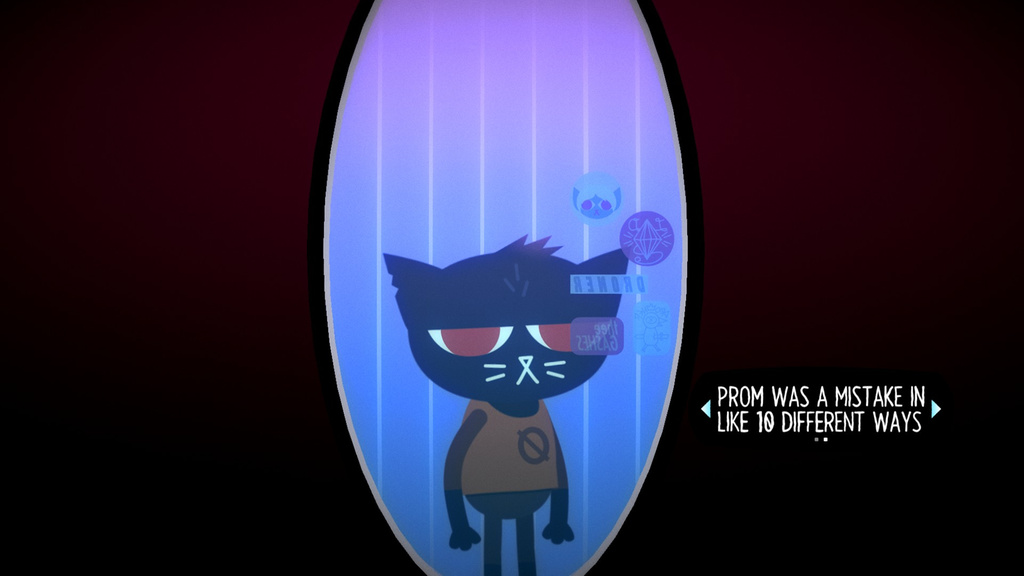