2Dark is the product of four industry veterans under the name of Gloomywood, one of them being Frédérick Raynal, one of the minds behind Alone in the Dark. Something else worth mentioning is that, despite the fact that the game was successfully crowdfunded, during the development the developers were forced to seek the aid of a publisher, in this case Bigben Interactive, which seems to have allowed them to deliver the game that they had initially promised. 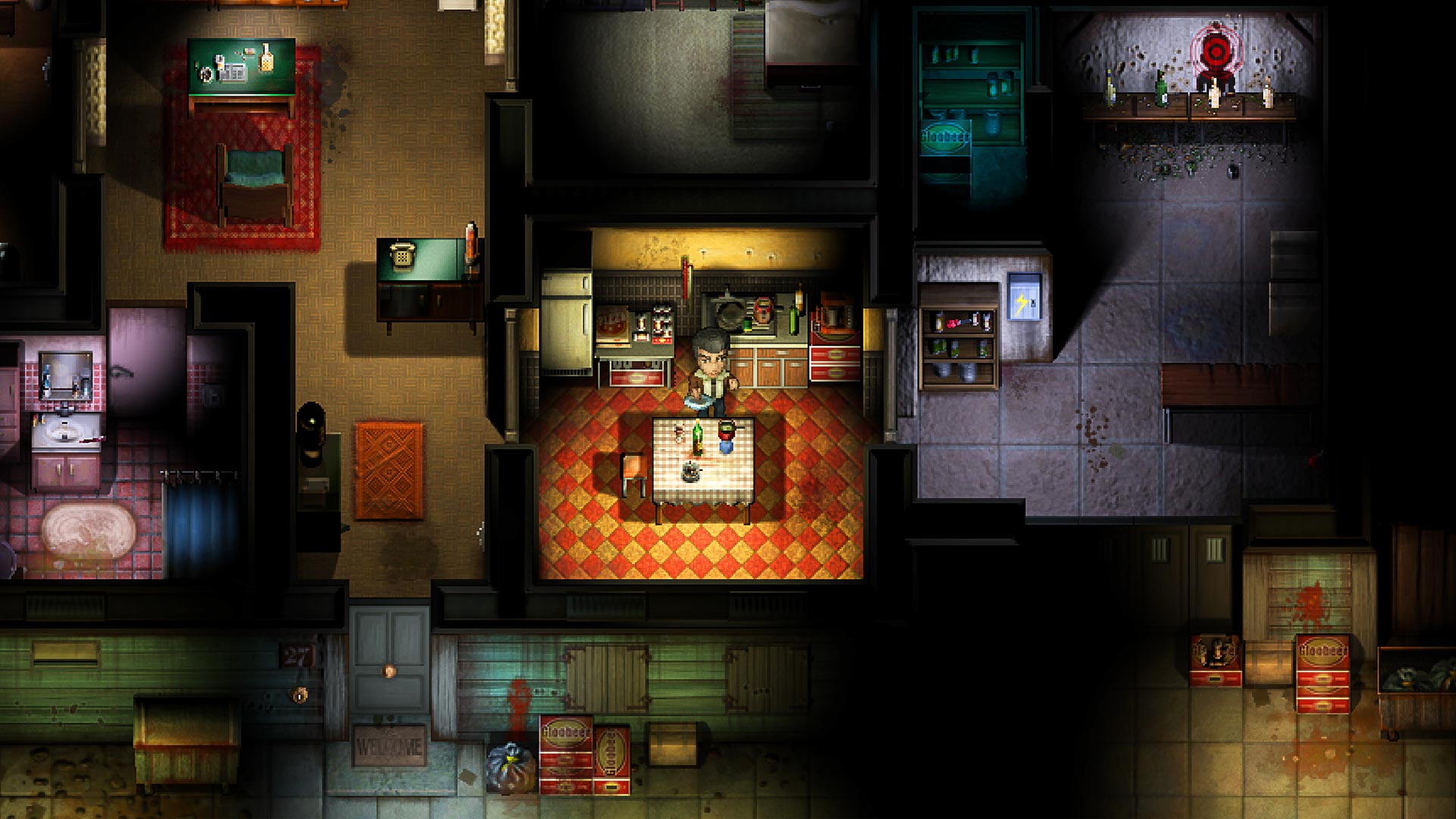 The game starts off rather quickly, with a little prologue opening up the story in 1969 and then the game jumps forward seven years and that’s where the game takes place. After a series of mysterious child abductions you embark on a personal quest to find who’s behind all these inexplicable disappearances in the town of Gloomywood. The narrative is presented in various forms such as, dialogue between you and other characters as well as enemies, through small lines of dialogue during the loading screens and also through numerous magazines, newspapers and other documents which you can find in the levels. While these last few do a really good job in providing a background story to the main events surrounding the whole plot, they’re entirely optional and you don’t need to check them out or hunt them all down if you don’t want to. With that said, the game only has voice overs during the loading screens dialogue sections and that’s probably for the better since the voice acting isn’t really worth any praise.

In terms of gameplay, this is, in essence, a stealth based horror game, in which you need to plan carefully your approach, if you rush the levels trying to take enemies head on you’re going to have a rough time. The game is played from an isometric point of view, which allows you to become aware of your surroundings, and is necessary given the fact that the major game mechanics surrounding the stealth element are noise and visibility. Enemies are attracted to any noise you make and the game is kind enough to enable a circle around noise sources so that you know how far the sound wave reaches. In the same sense, a vision cone, which turns red, also allows you to see when enemies notice you so you know when to back out. As a consequence to that, sometimes you’ll find yourself navigating in the dark, trying to remember where each corner is in order to remain hidden and trying to not bump into an enemy. 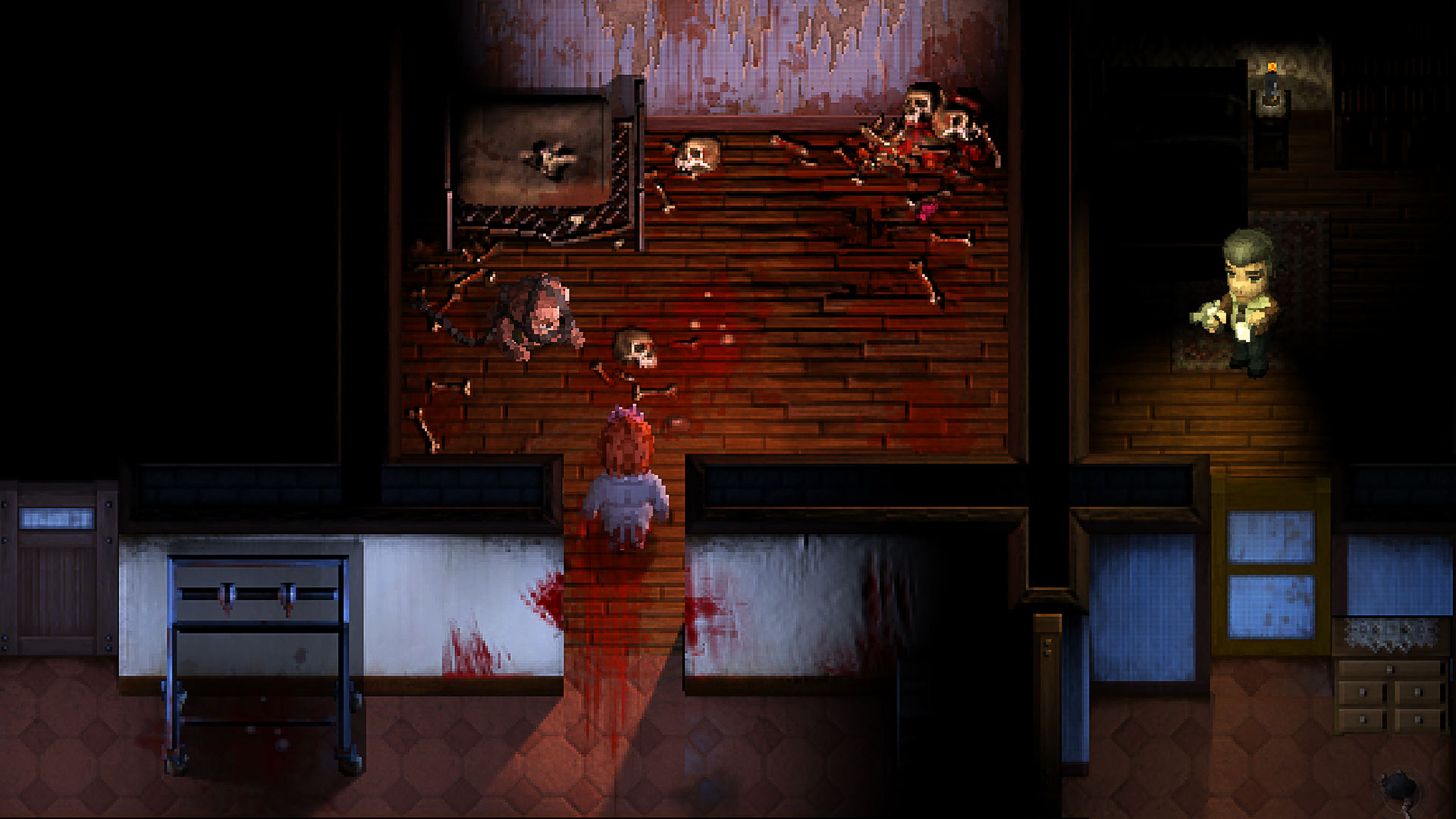 Other than that, mechanics that are present in other stealth games make their appearance here as well, such as, dragging bodies and moving crates but, the icing on the cake here really is the candy and the children, and yes, you read that right. In each level you’ll be able to rescue kids that have been captured by twisted minds, serial killers and other kinds of criminals and, in order to do so, you must escort them to the exit or simply carry them there. In the same sense, candy also plays a vital part in the game, as it allows you not only to distract enemies but also to attract children and interact with things, such as activating a lever from a distance. Still, when you’re escorting more than a single kid you’ll have to be careful, as they tend to get scared with corpses and, if left alone, they tend to scream out loud which can attract unwanted attention.

While enemy variety is pretty much nonexistent, the levels themselves, and even different floors, are fairly different. Still, usually you’ll find yourself going around trying to find a key or another item in order to open a door so that you find one of the clues you need in order to complete the level and then you’ll also find another key which lets you access another area or unlock a shortcut. There’s quite a fair amount of backtracking and, while the levels are not huge, the problem I have with that is that, if I don’t want to kill anyone, sometimes I’ll have to patiently wait for an enemy patrol to pass so that I can go back to another area which, after a while, can get pretty boring. In any case, the level design leaves something to be desired as it doesn’t allow for different approaches as I’d like to. Still, I found the fact that you save by smoking, kind of ironic and interesting at the same time because the game doesn’t pause, so you have to time it right, and saving frequently will cause your character to start coughing which I found to be really neat. 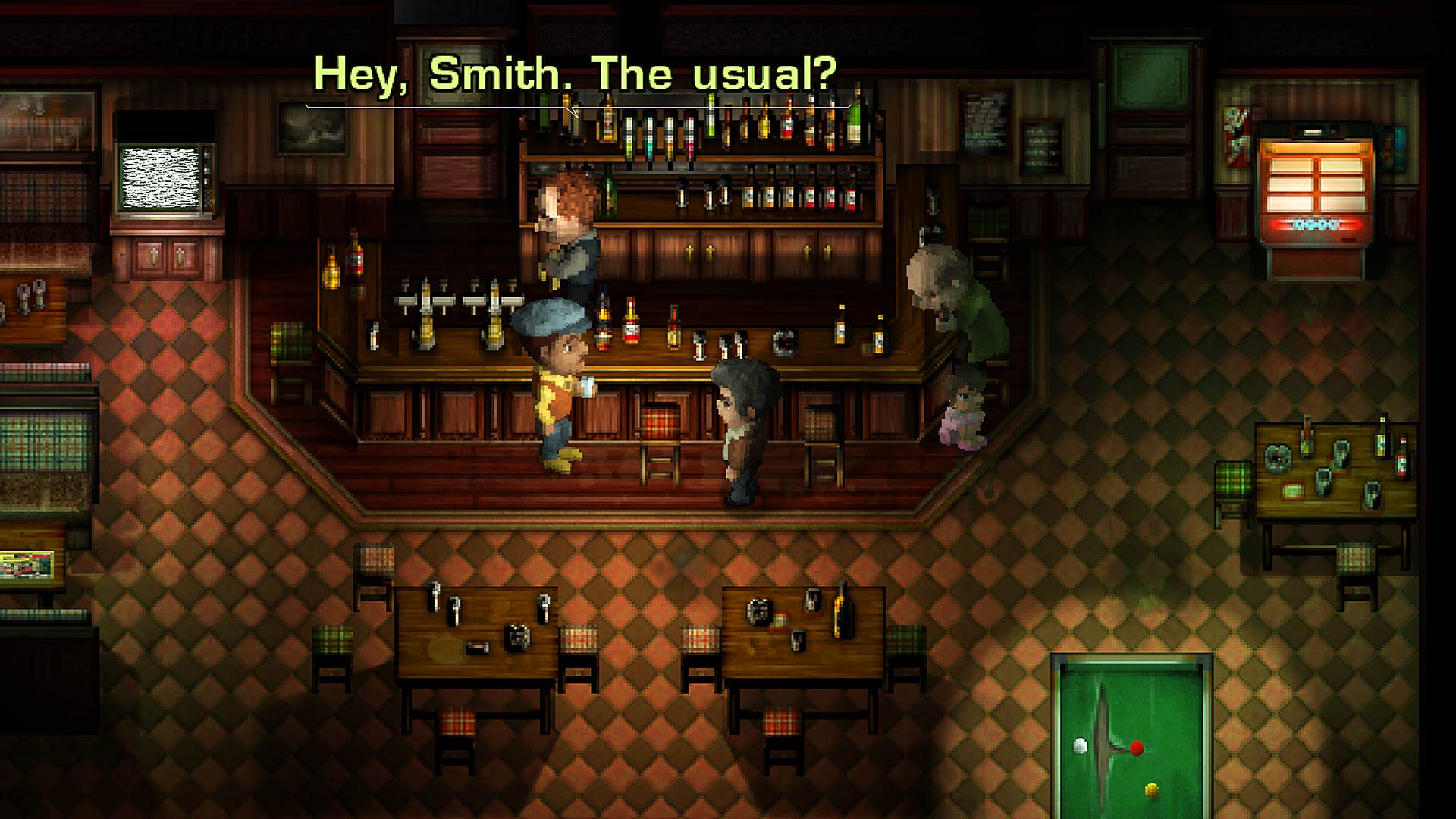 As far as controls go, the game is fairly easy to play by using the right mouse button or WASD to move around and the left mouse button to interact and use things. There are some quirks such as the fact that moving against an object will interact with it. That said, I’d say that inventory management is rather clumsy as things can get cluttered pretty fast and that, combat takes some time to get used to. With that said, the game distinguishes three types of attacks, ranged, frontal and backstab. These are pretty obvious as to what they entail but soon enough you’ll figure out that there isn’t much to it. A frontal assault will most likely get you killed most of the times and using a gun to take enemies down is a last resort as it produces a lot of noise. That leaves us with the backstab, which is the optimal way to handle things as it allows you to take enemies down with a single hit even though it is quite tricky because you have to find a right spot in order for the enemy to flash yellow, otherwise the game will consider it a frontal attack and you’ll be in deep trouble.

Something I found rather peculiar is the fact that, while the game features some cartoony pixelated looks, the setting and overall theme of the game is pretty dark and grim. The whole plot revolves around a series of kidnappings and the reasons behind said kidnappings. I won’t spoil it here but the game has some really grotesque scenes which might surprise some people. Likewise, the soundtrack lives up to the dark tone of the game by having some really eerie and creepy tracks which I very much enjoyed. 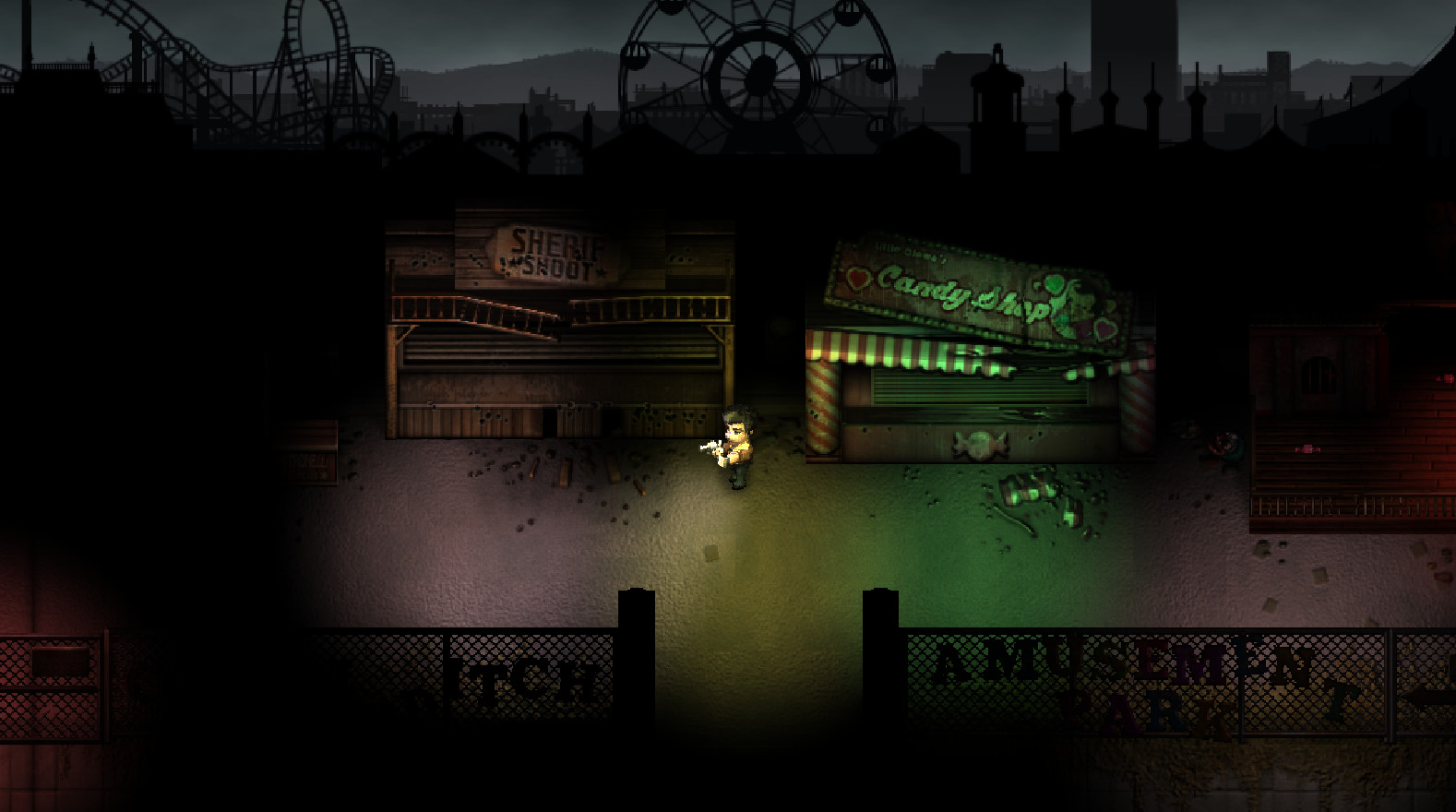 There are two things I’d like to address which might put some people off. The first one being that there are some jump scares in the game but not in the traditional sense. In some levels some parts of the floor can collapse, instantly killing you, and it’s really hard to spot these traps before knowing they’re already there. They’re really well concealed with only a few pixels indicating that something is different about that part of the floor and, because of that, whenever I’d fall on one of those pits for the first time, it would really startle me since your character tends to scream whenever he dies and there’s a rather loud sound cue that plays every time as well. Secondly, the game offers no rebindable keys for keyboard but it does have native controller support. As far as video options go the game is also very lacking, only offering the ability to turn on or off various in-game indicators and, in the same way, there is only a general volume slider, there isn’t a separate slider for sound effects and music. 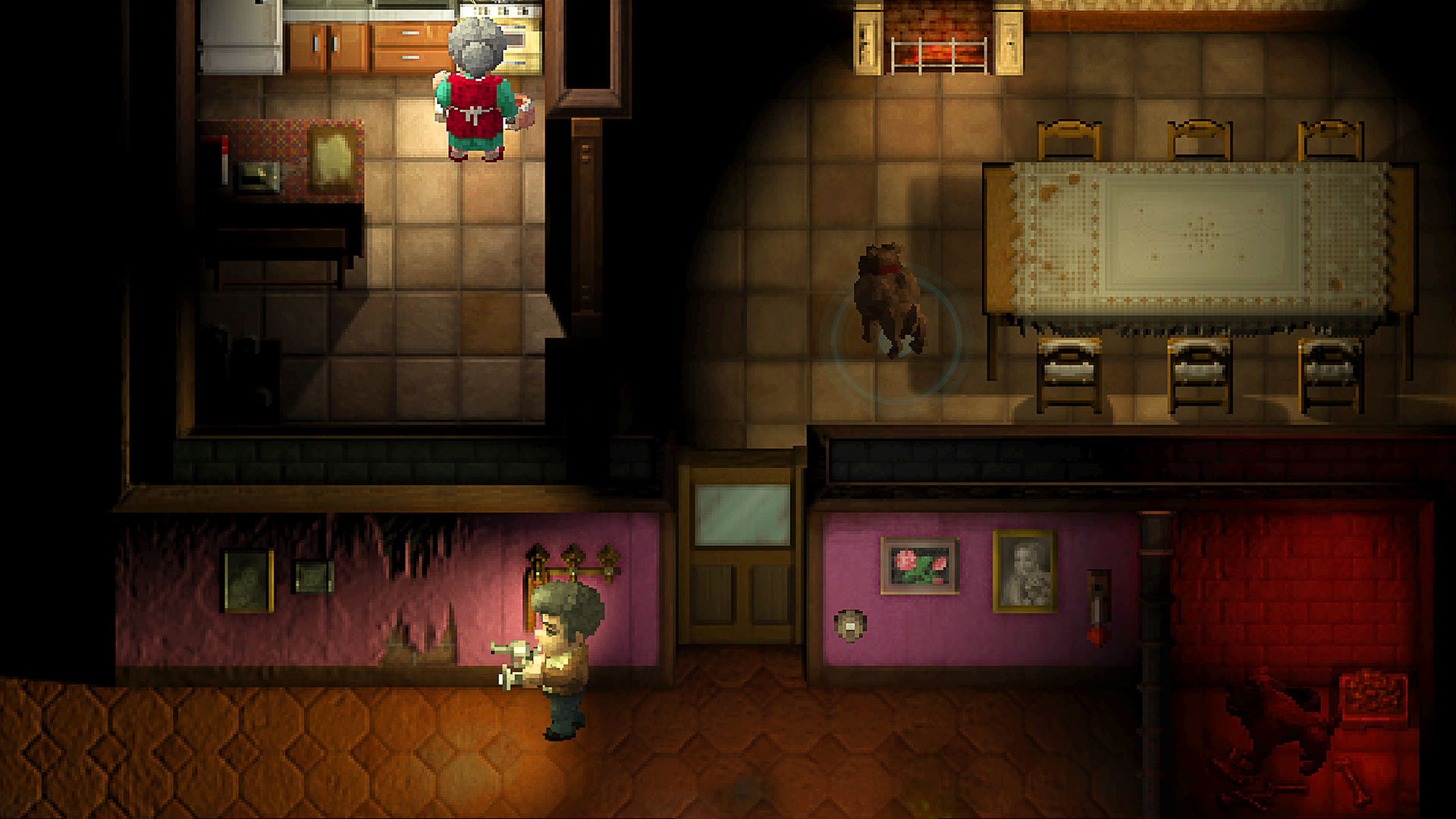 Summing things up, 2Dark is, overall, a fun stealth horror game with a rather extraordinary plot in which you hunt down a bunch of serial killers while uncovering a shockingly terrifying plot going on in Gloomywood, which makes things a whole lot more interesting. In terms of mechanics it’s well put together in a clever way and the nine to ten hours in took me to beat it were well spent and I was really engaged during the most part. Nevertheless, while this is a fun game on its own right, I personally don’t recommend buying it at full price because it doesn’t really bring anything particularly new to the table, and that’s why I’m rating it as a Save for Later.

As a side note, I’d like to point out that the game currently has Denuvo DRM which goes against to what was originally promised during the crowdfunding campaign. In the original campaign the developers stated that the game would be DRM-free and available on Linux and Mac and, as of right now, there is still no word regarding those versions. In any case, refunds are being offered to backers who aren’t fully satisfied with the final product so that is also worth mentioning.