An abysmal 3D game that wishes to be abstract I guess, but fails at even the most basic principles of gameplay stability.

I really wanted to enjoy Rest House. I requested a review copy for it, simply because I can never write enough about abstract games on Steam. Rest House from its Store Page description and official screenshots looked most promising. Oh, Chris…you never learn, do you? Apparently not. I had a most unpleasant surprise, to say the least, once I booted the game for the first time and noticed that it crashed almost instantly. Not a good sign, but I was still willing to offer this game’s debutant developer a chance to redeem his game in my eyes. 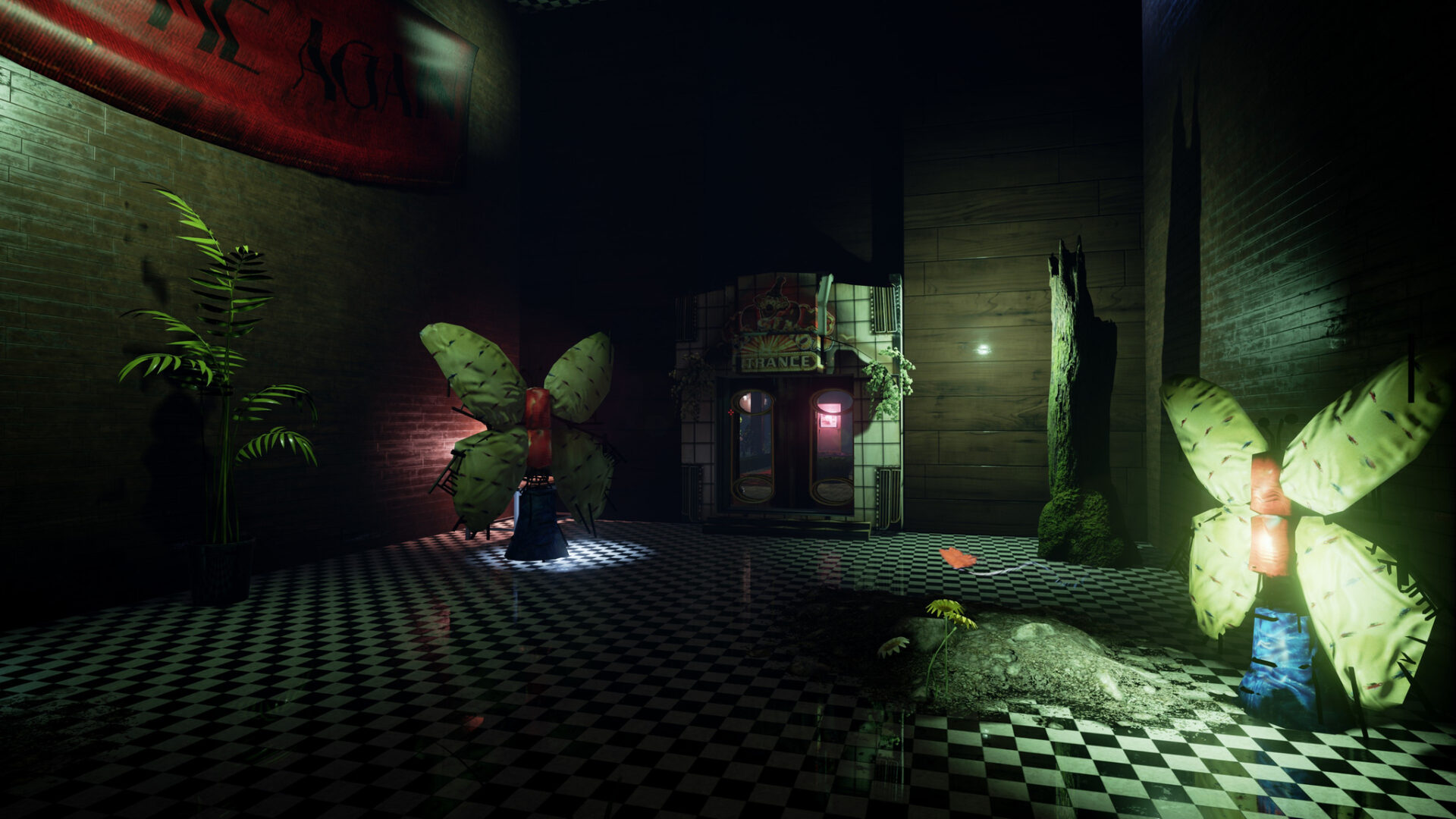 I was willing indeed but even goodwill has its limits. In the approximately 13 minutes of excruciating play time, I had over 30 CTDs (crashes to desktop) in seemingly random places throughout the game’s few levels, if they can even be called so. You see, most abstract games I played on Steam until now at least had some form of introduction, sometimes even an explanation and clear set of objectives. Rest House features absolutely no context that might make sense. From the title’s simplistic Main Menu (which, by the way, also doesn’t have any resolution or control rebind options) you can choose to start any of its 5 nonsensical levels that bear no resemblance to any gaming genre I played until now and also don’t appear to be connected even between themselves. So what do you do or accomplish in this game? I have yet to find an answer to this question. 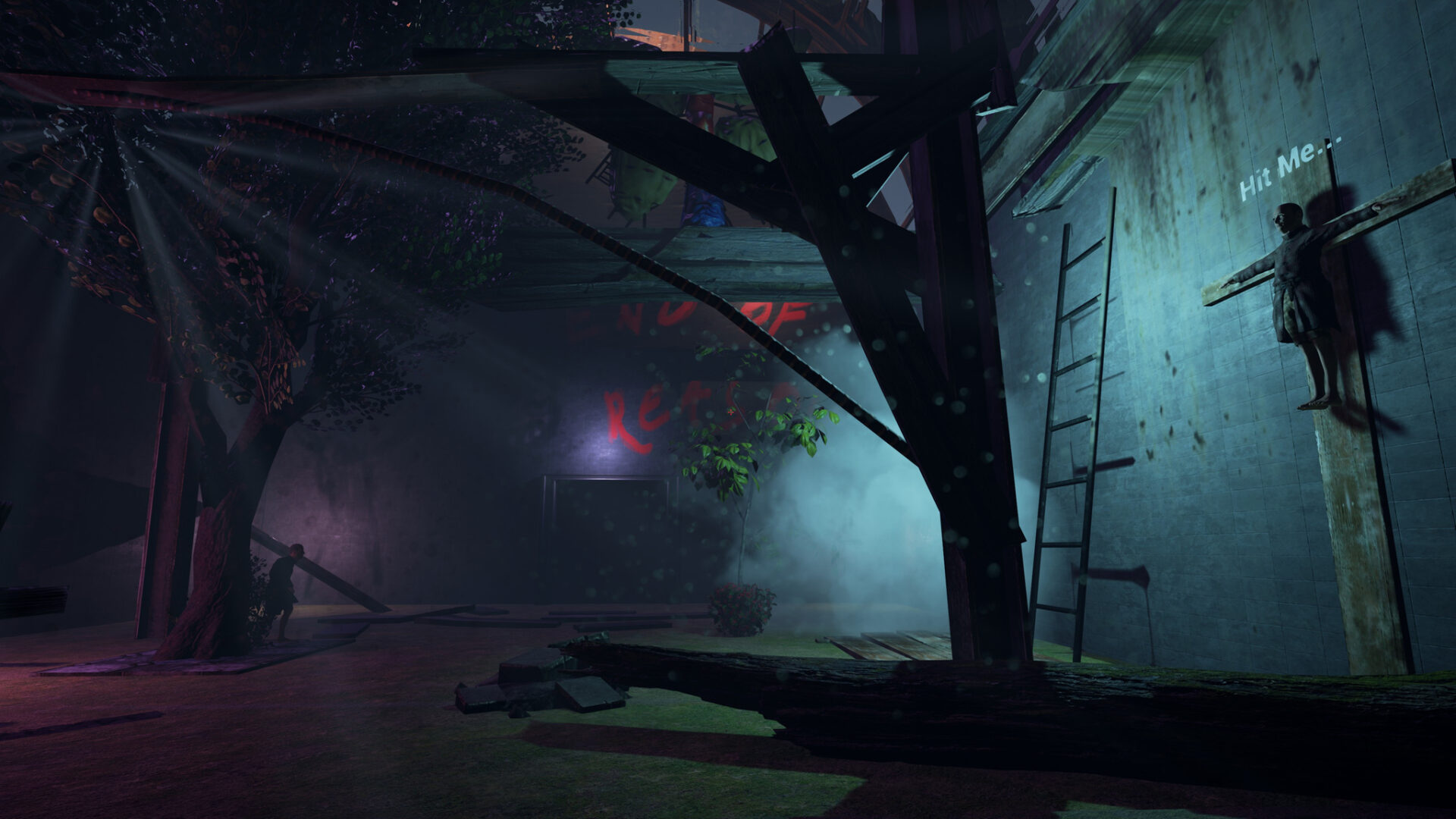 And it’s a pity too. Unreal Engine 4 offers a high quality set of assets which, in skilled hands, can certainly provide for a fun gaming experience. I’ll let you guess if studio Don Quixote qualifies as skilled or not. At least they could have attempted a re-imagining of the adventures undertaken by that nutty hidalgo, if they bear his name. “The history of the valorous and wittie Knight-Errant Don-Quixote of the Mancha” is a most coherent work of fiction compared to Rest House. I won’t deny the game looks decent, but in its current state, it is far from enjoyable, let alone playable. And while I shall not boast my system specs here (you can always find a link with them, on my Steam profile), rest assured that I have played, maxed out, games that were considerably more pretentious than the one I’m previewing now. It goes without saying that the many CTDs I had to endure are not caused by any potential hardware incompatibilities. I simply wished to play this game for a decent amount of time, but its instability made it a chore even to gather the necessary screenshots I usually like to collect from any game I play on Steam. Never met before a game with so many crashes in such a limited time frame. 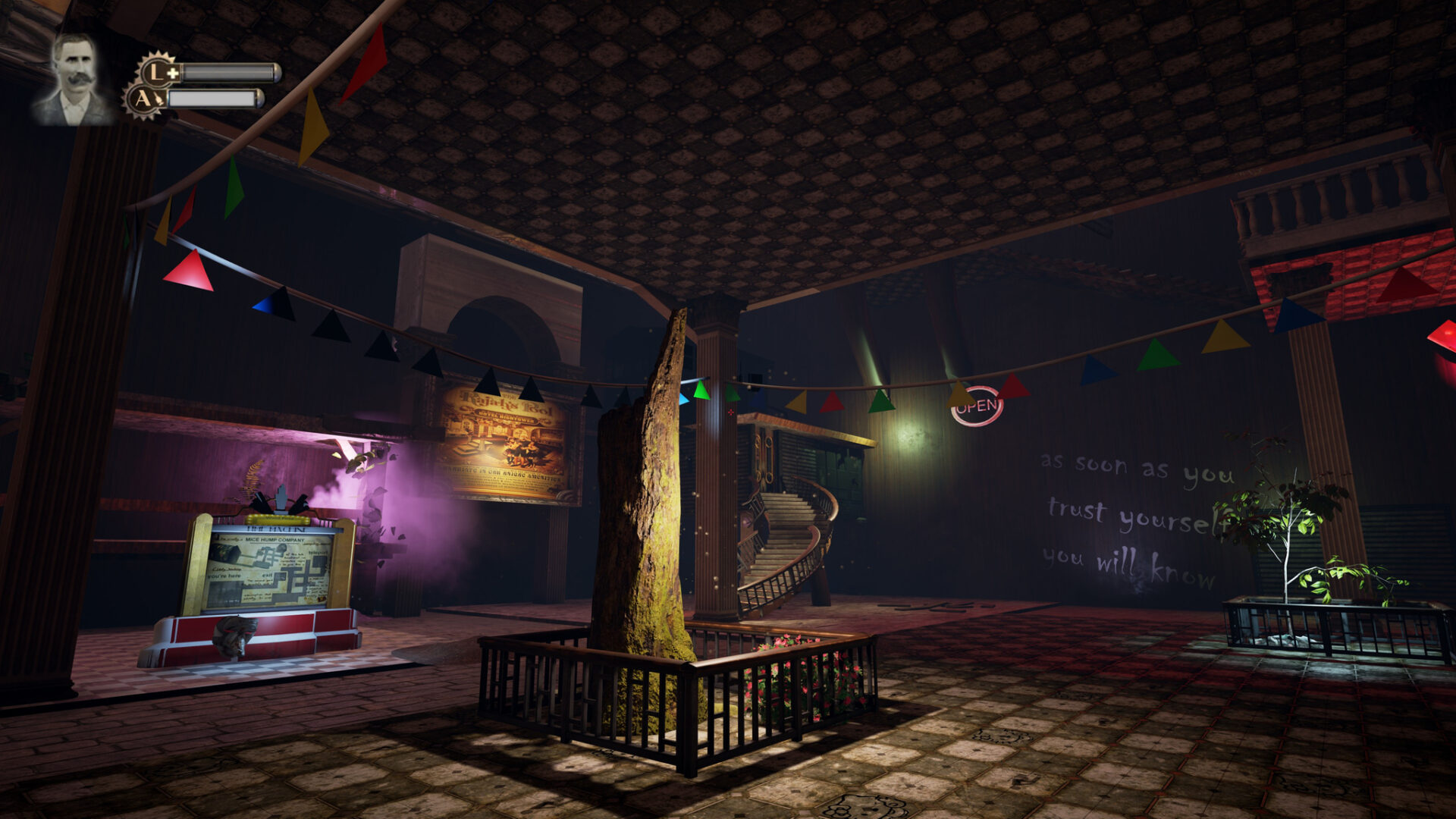 I cannot stress enough how atrocious this Early Access title really is. It lacks polish, aim, storyline and even the required stability in order to at least explore those barren corridors it features. If most abstract games encourage thinking outside the box, Rest House sets that box on fire and then takes a leak over its ashes. I don’t recommend you purchase it at all, but if you’re an Achievement hunter, you may at least wish to grab this title when bundled or under a heavy discount. I for one, advise any potential players to steer clear from it. 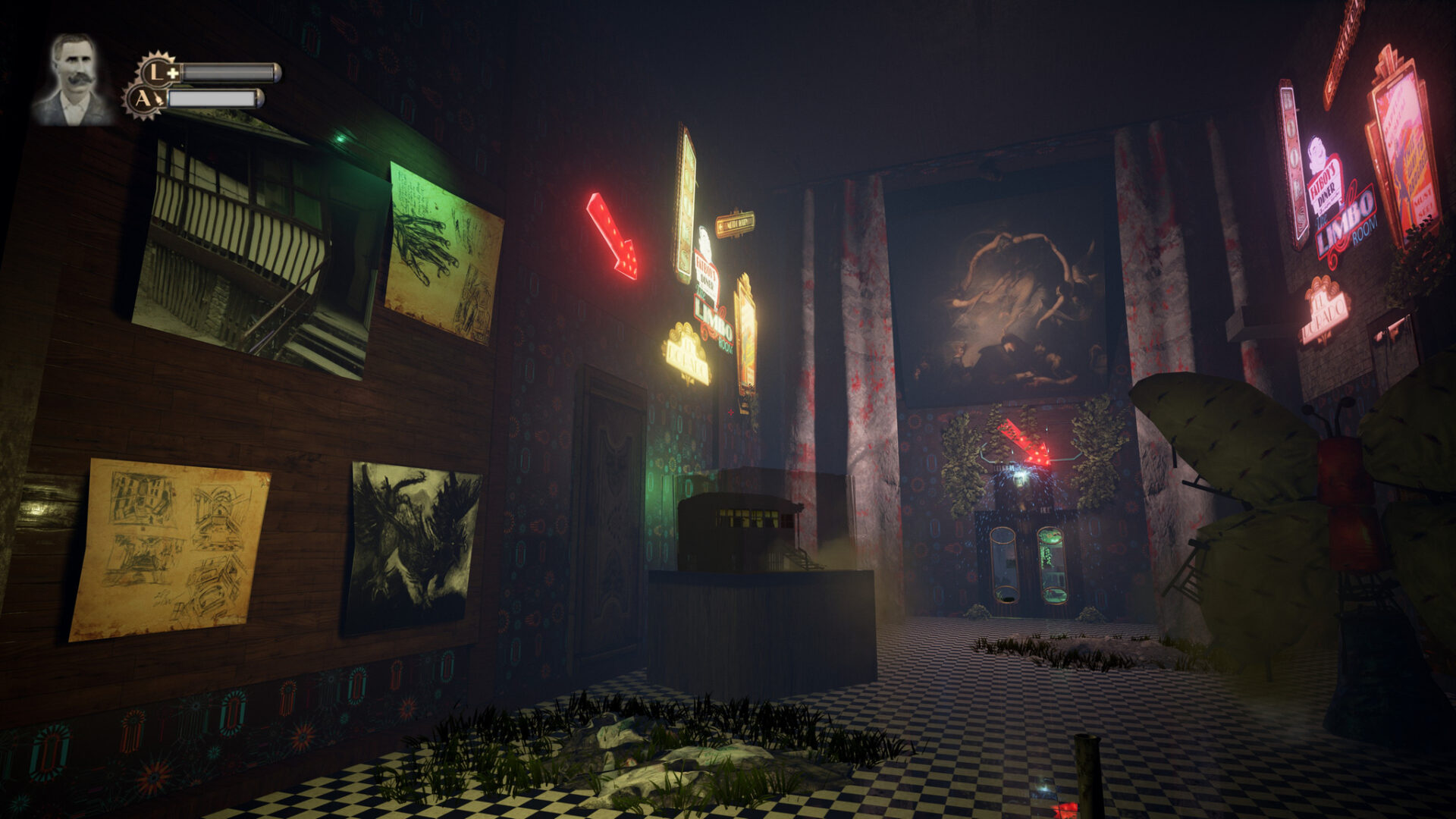 Weak Points
– Crash after crash after another crash to desktop.
– Calling it “nonsensical” would be an understatement.
– Literally unplayable and with no explanation or context to anything.
– No Steam Trading Cards.
– Overpriced since it offers nothing to enjoy or learn.

[ RESPONSE FROM THE DEV ]

First, English is not my native language so sorry for the grammar and other mistakes.

What is it?
This project is the sequel of the same name feature movie that I did few years ago. I’m movie director with experience in 3D and VFX. This game is first attempt to try mix those to mediums movies and games.

As a solo developer, I’ve got deep in to the game creation so I wanted to translate my movie, 3d and VFX experience in to the game.

Indie struggle is the well noun phenomenon and it takes time to make the polish and decent product. First goal was to make interesting game that will attract players.
Now I’m in the second phase in witch I’m debugging and polishing the Rest House so that it can be played without annoying distractions. In the previous period game was free. There are also html5, multiplayer and VR versions. PC one is the most recent witch I’m working on and streaming live every day 22h(CET) at markokacanski.com and 7 more streaming platforms.

Till now more than 20 000 players tried the game and viewers helped and raised the project with donations to the Steam. Now there is no coming back. Critiques are helping a lot because till now most of critiques was positive. Width the negative ones I’m realizing weak points and planning to turn them in to the opposite direction.

So maybe game genre will be: “3D Bad Joke”. Joke in which the players will mostly enjoy because in some games that I like you also suffer.

“An abysmal 3D game that wishes to be abstract I guess…”

This can be really good for the game marketing, I like it. Rest House is the deep, dark and damp place like the Abys probably is.

I’m really enjoying in that world and trying to make it enjoyable for the players. Stability issues are what is making the game development a “little” bit complicated. And that’s why the game is not free anymore. I need support to make it more pleasant.

Oh, Chris…you are learning every day as we all do.

There are more than 6 years of the story development. Now is time to connect all the pieces. That’s one of the next steps.

Crashes – I’m really feels bad and ill when my baby game crashing. That should be the next important step in my game dev indie struggle bubble.

Crashes are weird thing especially if some players are not seeing them. And what is more tragicomic is that developer don’t have that crashes on his cheap machine. Weird because it happening at strange not same places. Maybe leaks, maybe bugs… I apologize and I promise that I will work on that.

But also, some triple A games have crashes also, and this one is in the beginning of the early access pre-alpha phase so it can grow and heal…

“You see, most abstract games I played on Steam until now at least had some form of introduction sometimes even an explanation and clear set of objectives.”

You’re right. Introduction is coming. Stay tuned for the even more abstraction. There are some sets of objectives, at site and wiki page and even in the game. Yes, I’m planning to make game play objectives more clear. Not enough test players so I couldn’t see some things by myself. Tnx again!

Simplistic Main Menu as other mentioned things will be changed in the near future. Working on it but as the one-man dev. team it is taking time… I know that players are expecting the best but this is early access…

You can start any of the 6 levels because I wanted to give you the chance to quickly fill the atmosphere and look all of them. In the later phases that system will maybe be changed.

At the end of the game in the Control level you can unlock the feature movie witch I made before this game. So yes now I’m working in that connections to explain the players the meaning of the different in game objects and elements and their connections with the story.

Thank you for pointing out.

“Unreal Engine 4 is offering a high-quality set of assets and yes in skilled hands, it can provide more than fun gaming experience.”

That’s why supporters pushed this game to the Steam.

Studio Don Quixote qualifies with more than 10 years’ experience in the 3D, VFX and movie industry. Studio don Quixote is me one man developer.

Don-Quixote of la Mancha is character that I wanted to put in this story because I’ve got big plans with him. We’ll see if he will survive.

“I won’t deny the game looks decent, but in its current state,…”

Once again game is in the alpha phase it’s far from finished.

-Sorry for the crashes, I need more info’s to start fiksing them because at my cheap machines it’s working. I’ll do my best to fix that.

You’ve got this game for free as the gift. When someone give me the gift I say thank you.

“It lacks polish, aim, storyline and even the required stability …”

Should I wrote that the game is in alpha phase as early access?

“If most abstract games encourage thinking outside the box, Rest House sets that box on fire and then takes a leak over its ashes.”

I recommend you purchase and support this game as many other players. You will get the game and movie experience new ride that will be something different, interesting ride. For the supporters, VR version is coming for free with other interesting new stuff.

Potential players keep an eye on it.