If you take a brief glance at a video for this you may think it’s all about timing and dexterity but it’s nothing of the sort. This is a puzzler through and through. 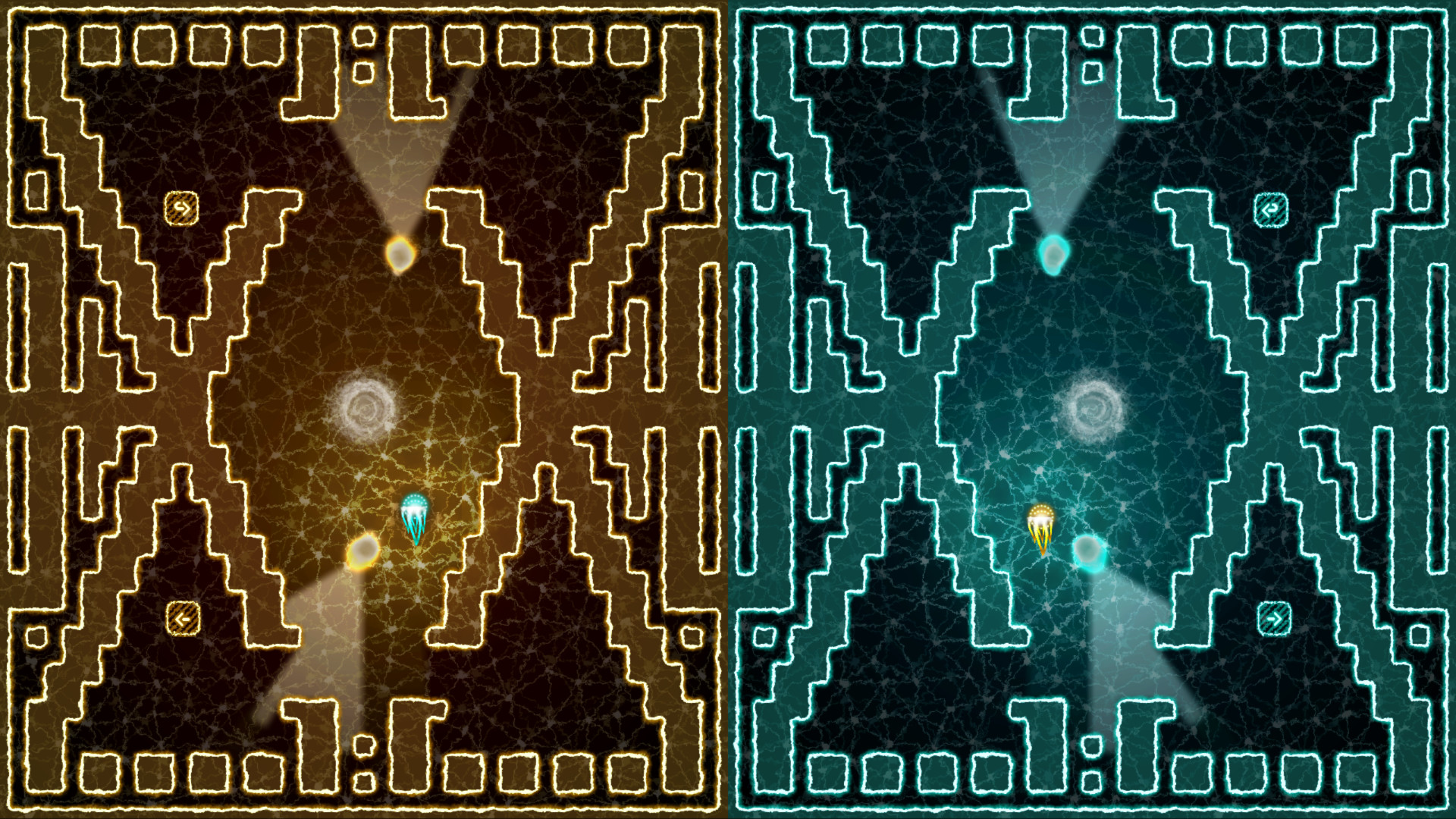 You have two rooms: orange on the left, blue on the right, with a jellyfish in each. The two rooms are usually identical, sometimes there is a small difference. Using your left and right controller sticks, you have to move both of your jellyfish to the exit portals at the opposite ends of the rooms. Doorways are guarded by sentinels with vision arcs, and if one of your jellyfish gets caught by an arc he’s zapped back to his starting position.

Placed at strategic points around the rooms are powerups. Each jellyfish can collect one at a time and use them to solve the puzzle. In the vast majority of levels the powerups are used to help the opposite jellyfish, so you mostly only need to control one at a time to complete the puzzle in sections.

The most prominent powerup opens a circular portal to the other side, so a common solution is to place a portal in an area where there’s a sentinel nearby on the opposite site, then go and collect a ‘summoning bell’ powerup and use it to call the sentinel away, allowing the other jellyfish to sneak past. Other powerups include switching one (or both) jellyfish to the opposite side; transporting sentinels to the other side; setting quick-transport lines to convenient locations in the other room. 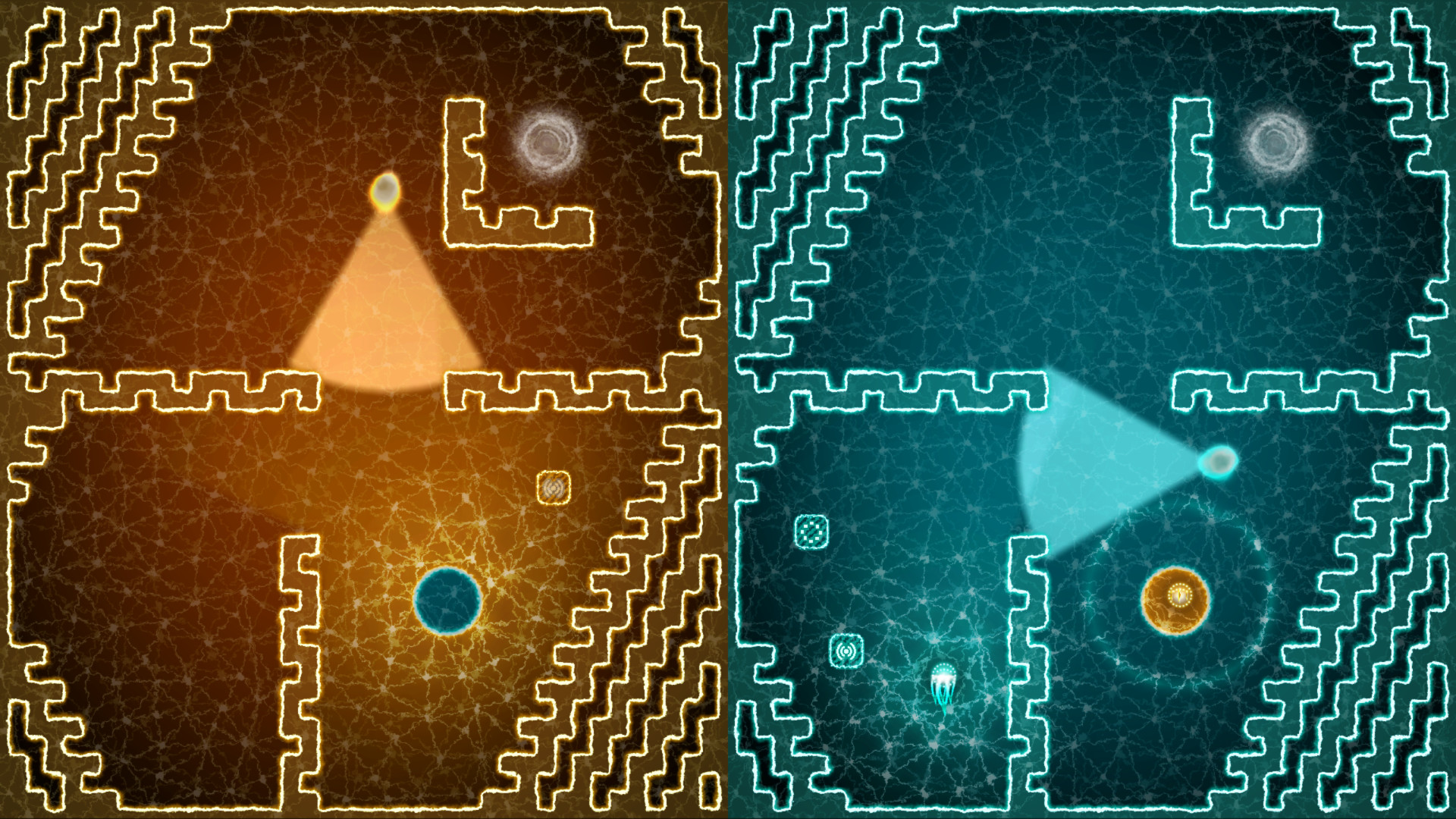 There are a small number of levels where you have to use a bit of dexterity to move both jellyfish swiftly and simultaneously to get past sentinels before they return, but generally you can play at your own pace and deal with one jellyfish at a time. It doesn’t require the reflexes of a housefly by any means.

Level overview is rather nice, you move your 2 jellyfish to the portal to start a level in the same way as you would within the level. There are 13 sections each with a random number of levels between 3-5. As you complete a section you’re rewarded with a wordless comic strip panel depicting the story of a boy and his robot. It seems rather pointless but why not, I guess. There is one glaring issue with this game: each time you complete a level it is LOCKED and you can’t go back to replay it. Bizarre. The dev says he had no idea that people would want to replay levels. Erm, OK…

The game is currently Windows only, but there is Linux in the offing once the dev has worked out some bugs with it. Steam Cloud, trading cards and achievements included. 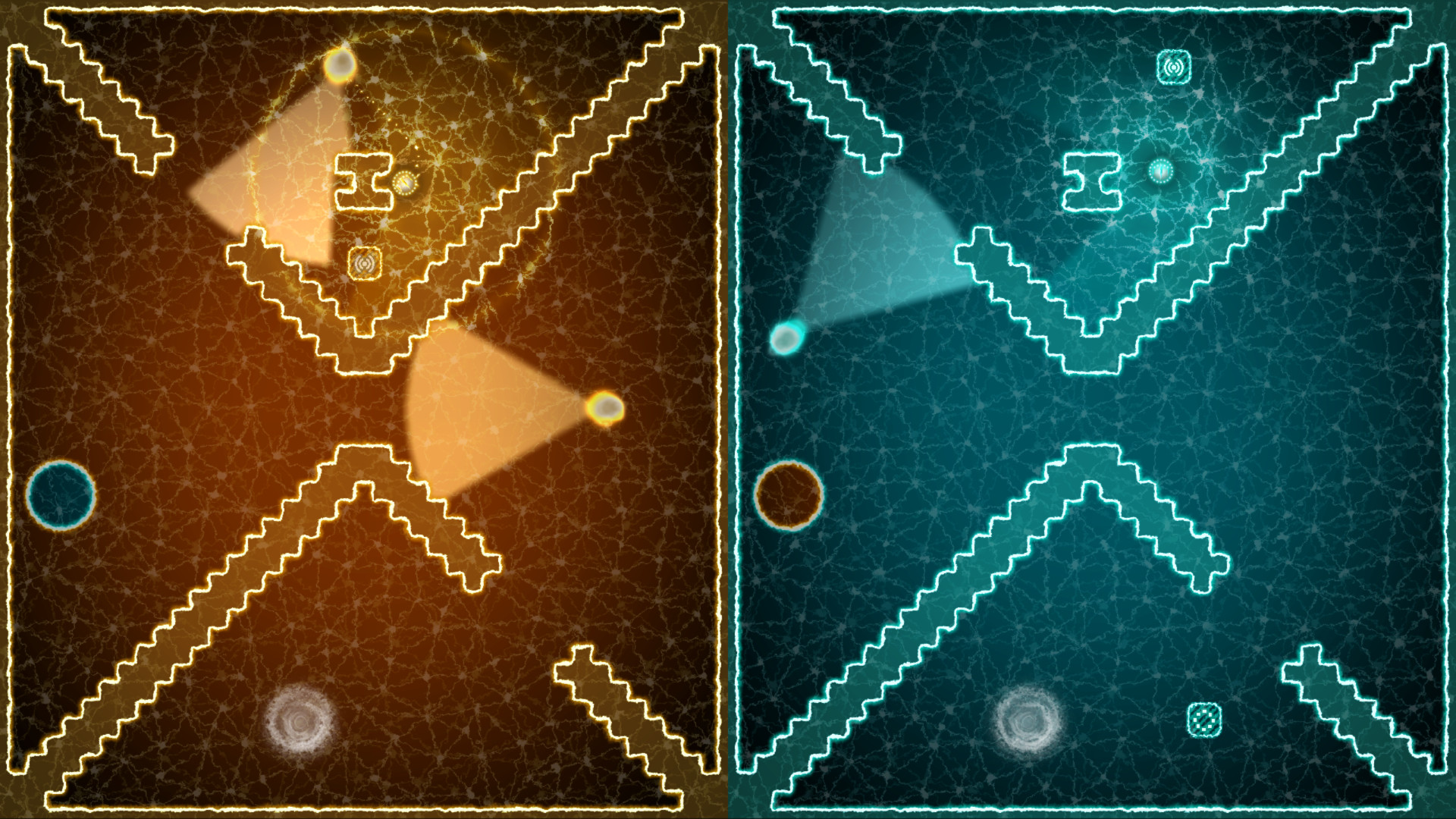 Although there are comparatively few graphical elements, it’s tasteful and stylish. There’s a blue/orange theme throughout which helps your brain connect with the puzzle system. The whole thing shimmers like a desert heatwave – no, my video isn’t fuzzy, that’s how it actually looks.

Music is more of a background ambiance with no melody and the sound effects are the usual thing, it’s all pretty standard stuff for this type of game.

There are a few downright easy levels, even in the later stages, but generally I’d say medium difficulty. Levels will keep you thinking for a few minutes but not much longer than that. It’s a casual, relaxing game with no danger of rage-quit. 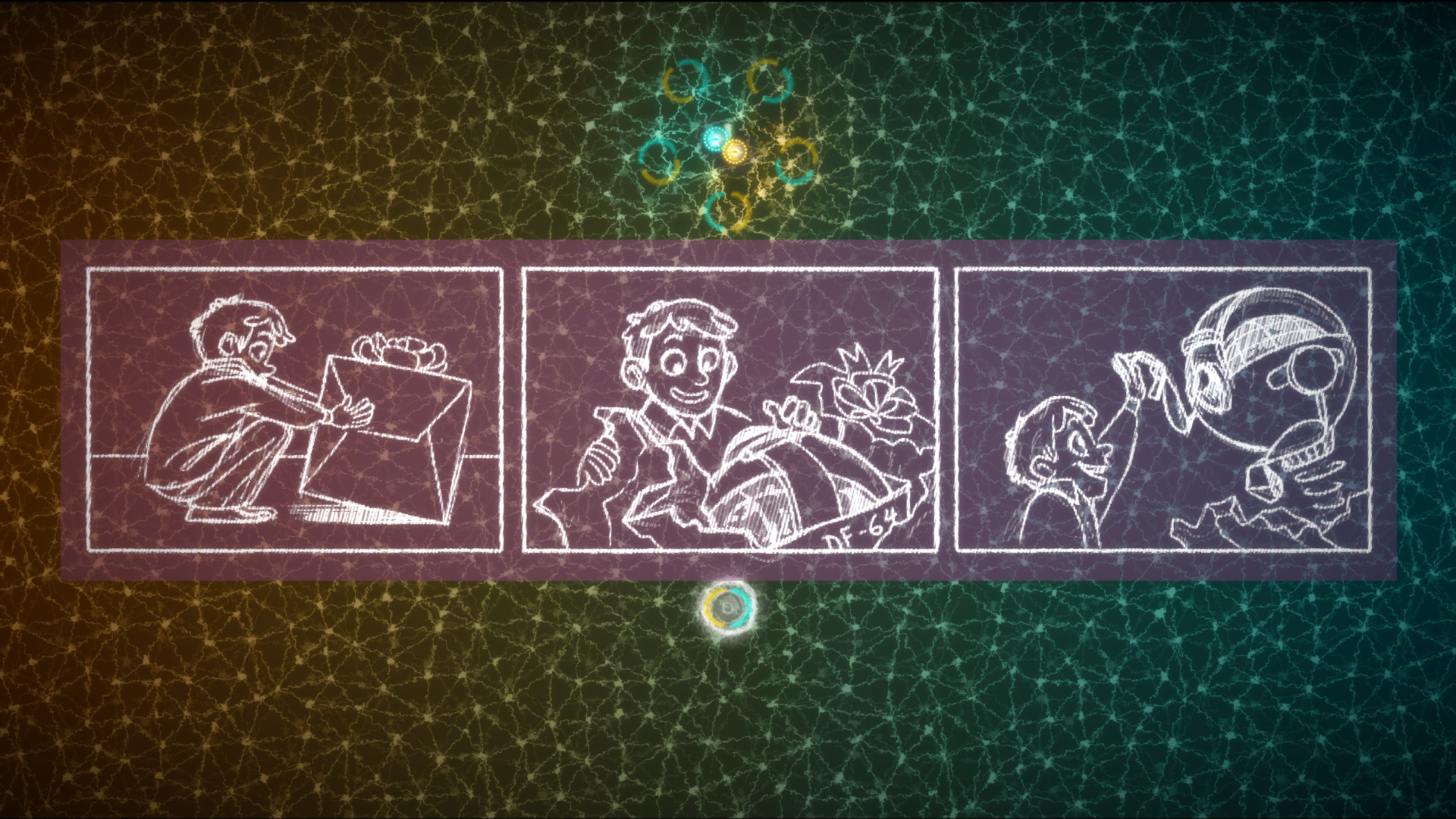 It’s a good quality game and you won’t be disappointed, but with 50-60 levels, many of which don’t take long to solve, this is a rather short game for the price. The final achievement is called 35:00 which means you can speedrun the entire game in 35 minutes, and this is the only replay value you’ll get out of it. I would wait for a 50% sale.

It’s a pleasant, satisfying game with an interesting and unusual concept. It’s fun while it lasts, but this is not one you’ll be adding to your long-term favourites. You’ll play it once, enjoy it, then move on and forget about it.