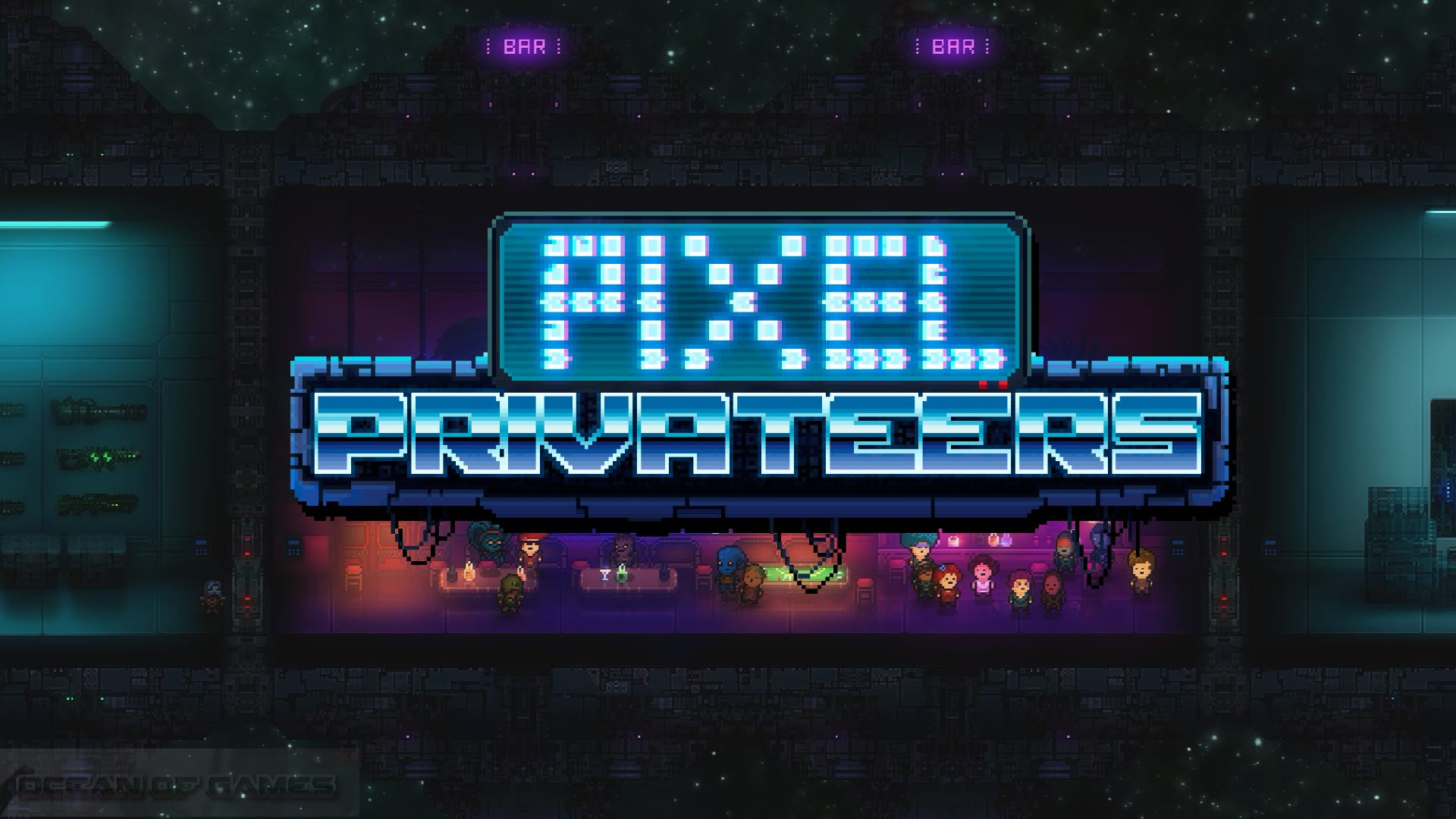 In this game, you will be appointed as Captain of a mercenary ship contracted by The Company, a galaxy-scale corporation which always seeks profitable opportunities. When a mysterious wormhole appears in a region of space, your ship is sent there to investigate potential unknown technology or scientific data for The Company to acquire. But, as always, things don’t go as planned: the mercenary ship gets sucked in a gravity well and teleported to the other side of the wormhole, with apparently no chance of going back. Stranded, with few resources and fuel, in a dangerous unknown galaxy, it will be up to you to fullfill the directives your employers left you and find a way to go back to the known universe. And, since you are there, make a good profit out of it! 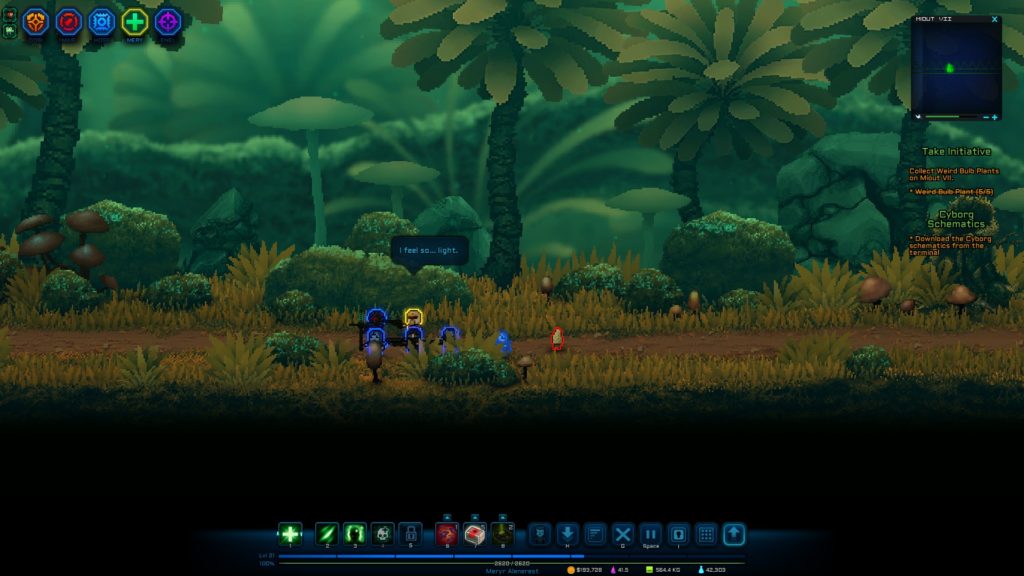 The gameplay of Pixel Privateers is divided in two distinct sections.

The first one is your ship:

You will be in command of a space vessel and its crew, and so, have the power to equip every single member to defint his role in the team (different types of equipments will determine different classes, which in turn will have unique abilities), upgrade their statistics when they level up, resarch new technologies with the Science Lab, replicate any good items you found with the Replicator (tea, earl grey, hot), clone your own crew members to create the ultimate army via the Cloning Lab, and resarch alien artifacts with the Resarch Lab and in turn gain Resarch Points to spend in new technologies. All these things tho are not free and require Matter to be done. Matter is in fact the primary resource of the game, used in almost every single thing from teleporting crew members to replicating objects (or people). Matter can be gained as a reward for missions, bought, harvested or from converting old equipment.

But it does not stop there, as in the ship there is even more: the Galaxy Map will allow you to see all the nearby planets and eventual space anomalies, and so drive the ship at the next destination, request new Missions from The Company or eventual new employers you may find in the Unknown Galaxy, and manage random encounters to decide what to do when they happen. Also, if docked at a shipyard, you will have the chance of building a variety of additional rooms in your ship (for a price of course), whihc will give different, often powerful, bonuses, like increased crew capacity or a remote link with the market when far from space stations, or also deploy additional on-board ship defenses to counter ship boarding parties, and finally of course buy a new ship if you need more space.

When traveling through space, always keep an eye for Fuel, as if you run out of it, you will have to launch a Distress Signal in hope of some good soul to lend you some, but who knows who might answer it…

The second major part of Pixel Privateers’ gameplay is the Ground Sections:

When approaching any planet, you will be able to descend on the surface, often in proximity of some hostile encampment, with the purpose of going there, blasting those aliens out of existence and get all their sweet loot. After all, survival has no compromises, the mission must be accomplished. Not that the aliens of the Unknown Galaxy are friendly, oh quite the opposite. Be it mutants, genetically enginnered abominations, cyborgs, rogue AIs or supernatural creatures, you will find youself facing a staggeringly wide variety of enemies, and such variety is also found in the loot you will find from then and missions, composed of a great variet of armors, weapons and utility items.

The Combat in Pixel Privateers is Real Time Pausable, so you can decide tactically each move when it’s needed, and have a quick real time experience when it is not. Each of the Classes (Engineer, Vanguard, Scout, Marine, Medic) have its own unique abilities which differentiate it majorly from the others. Each class has its own attributes to rely upon and aswell a bast-suited type of weapon for their role, but that does not mean you cannot give anyone any equip you want, you can certainly! By fighting, your crew will level up more and more unlocking abilities and bringing to the ship all the stuff, with which you will then equip them. If some of them happen to die, what happens depends on difficulty level: on Normal you can make a clone of the dead member and teleport it down again at the cost of Matter, while on Hardcore character death is permanent and if your whole gorund force dies, you will have to restart from the beginning of the adventure.

When deploying to a planet, you will also be able to select a Difficulty Modifier, higher it is, better loot you will find and more XP you will get, but also you will face MUCH tougher enemies. Since enemies always scale with your level by default, the Difficulty Modifiers will always be a great challenge, and to be overcome will require a great deal of thinking and squad tactics.

I have only a warning for you all, in the long run this might become all a bit repetitive. You have been warned. 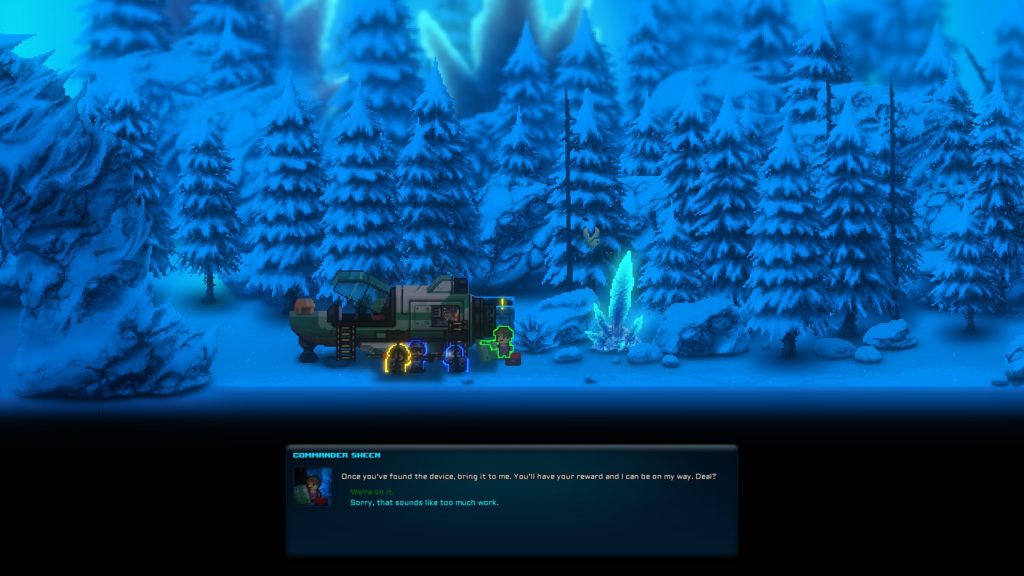 Technically, Pixel Privateers is exactly what is to be expected by a modern 2D side scrolling game. Varied, high quality and well-made effects are common, the pixel art is very well done and polished, the art of landscapes and enemies on the various planets is really beautiful and immersive.

The sound effects are alright, exception to be made for the utterly annoying music put on the ship deck for some reason, which will mostly ruin many a dialogue with various NPCs. You will know what music i am talking about.

Speaking of bugs, there are no major issues apart from one, as far as i know: there is a major bug with the Medic class which will break the UI and so the player will not be able to order his team to attack, leading to death and misery on the battlefield. To avoid it, remember to NEVER order the Medic to heal someone, let him do on its own.

Speaking of Performance, any modern and even old PC is capable of running a title with this graphical style, so there should be no prolems. 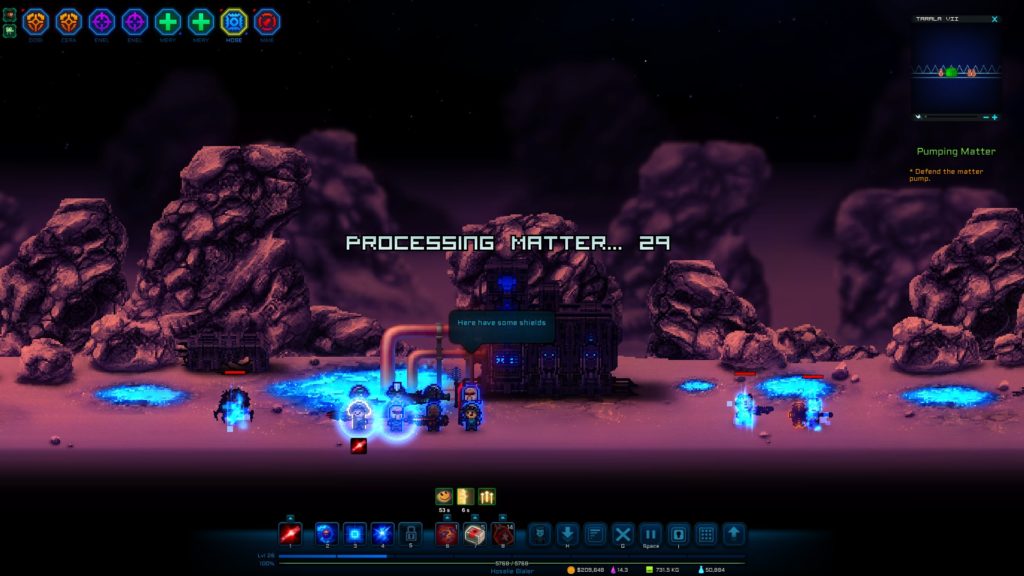 Definitely, Pixel Privateers is the rightful heir to Pixel Piracy: bigger, better, more varied, no ship building block by block but everything else is there and delivers solidly. A game suggested to all those who love exploration, variety, action and a bit of management thrown in the mix. Hardcore gamers welcome with an Hardcore mode which really is a test for all who like Roguelike experiences.