You’re presented with a large, animated, pencil drawn scene which you can zoom in and out of and drag around. At the bottom of the screen is a taskbar showing the Folks and objects to be found. Most of these are hidden, of course, so you have to move things out of the way to reveal them. Items pop out from underneath manhole covers, monkeys fall out of trees, snakes regurgitate chickens. You’ll spend the first couple of hours just happily enjoying the novelty of it all before you get down to the serious business of hide-and-seek. 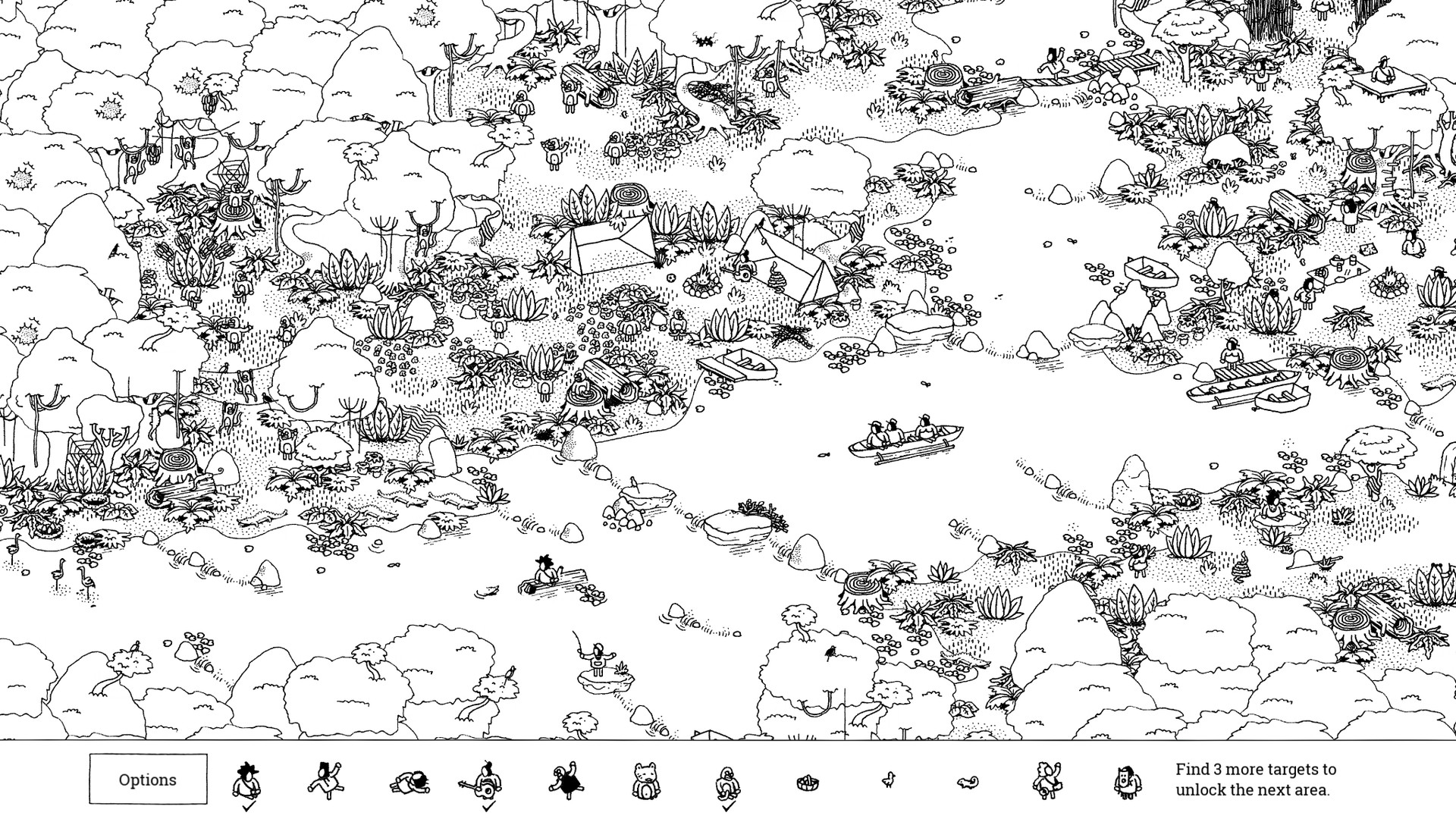 The artwork here is extremely complex, masquerading under the guise of simplicity. Each scene has hundreds of Folks in it, and if you look closely you can see that each and every one of them is unique. The whole scene is animated and further animations appear as you move objects around to look for Folks’ hidey holes. Everyone is engaged in some kind of activity and the Folks you’re looking for are up to all sorts of shenanigans such as being electrocuted, getting stuck on ladders, sleeping on the job etc.

The bright white background could potentially cause eye strain, but there are settings for sepia (my choice) and also inverted (white on black) if you prefer.

You can play in a window but you will definitely want fullscreen for this. You need the maximum amount of screen area to be able to see as much as possible in order to minimise the amount of zooming and dragging necessary.

It wouldn’t surprise me if the audio work here receives some kind of award in the future. Everything you click has its own sound effect and it’s all done by one man’s mouth. 960 individual sounds. How is that even possible?

As you zoom in and out and drag the canvas around, the sounds change in volume and it really brings the scenes to life. Some Folks dancing at an outdoor disco on the campsite with the boombox getting louder and then fading as you pass by is just so cool. 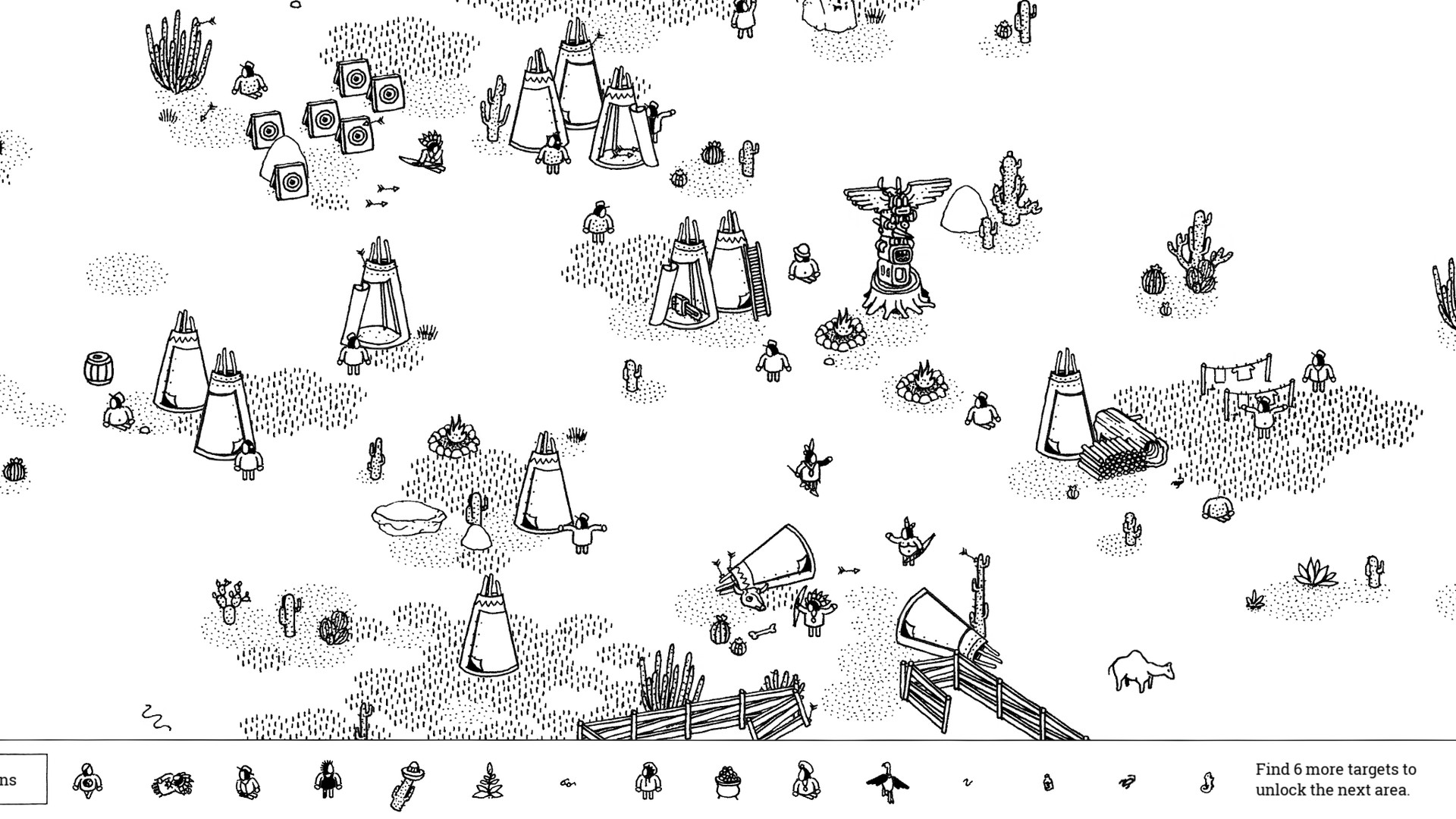 You don’t have to find all of the targets to progress to the next level. You can get through the first few levels by clicking everywhere like a crazy grinning loon, amidst a cacophony of farts, sighs and grunts, until you stumble on some Folks. This strategy will only carry you so far though. The last few Folks are always surprisingly hard to find, and each level has a larger canvas than the last. They become huge, and the difficulty is also ramped up due to more of the targets being hidden behind other objects rather than in plain sight. Eventually you must pay attention to what’s happening in the scene and use the popup clues given for each target. By doing this you can narrow down the area, for example if a Folk is a postal worker you can home in on the post office and search that area.

This can be a fun family game for kids of course, but make no mistake, there is a decent challenge here. These Folks can be frustratingly elusive, especially the last one or two when you’re trying to get the achievements for finding them all. 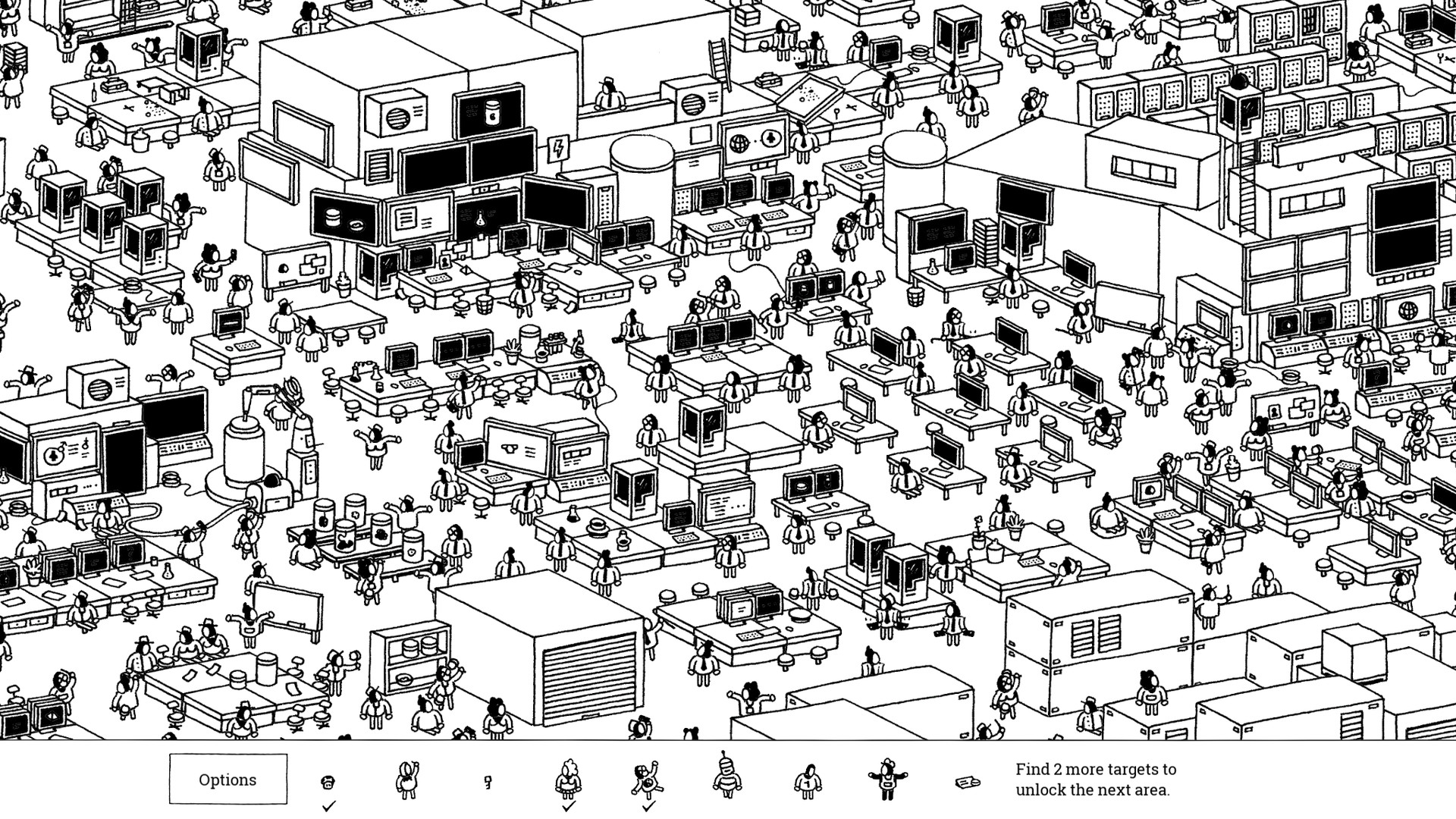 If you want to be clinical about it then yes, the midrange price is reasonable considering the quality, amount of content and fantastic gameplay. On top of that, there are more (free) levels still to come, already marked out on the menu. I think this game is beyond price valuation though (see below).

This is one of those rare, innovative, trailblazing games that only comes along once in a blue moon and spawns a new genre. Forget the price, this is something that you’ll want to experience as soon as possible because everyone will be talking about it. There’s a good reason why it has almost 100% positive ratings on Steam. A few Chinese seem to have a problem with it for some reason.