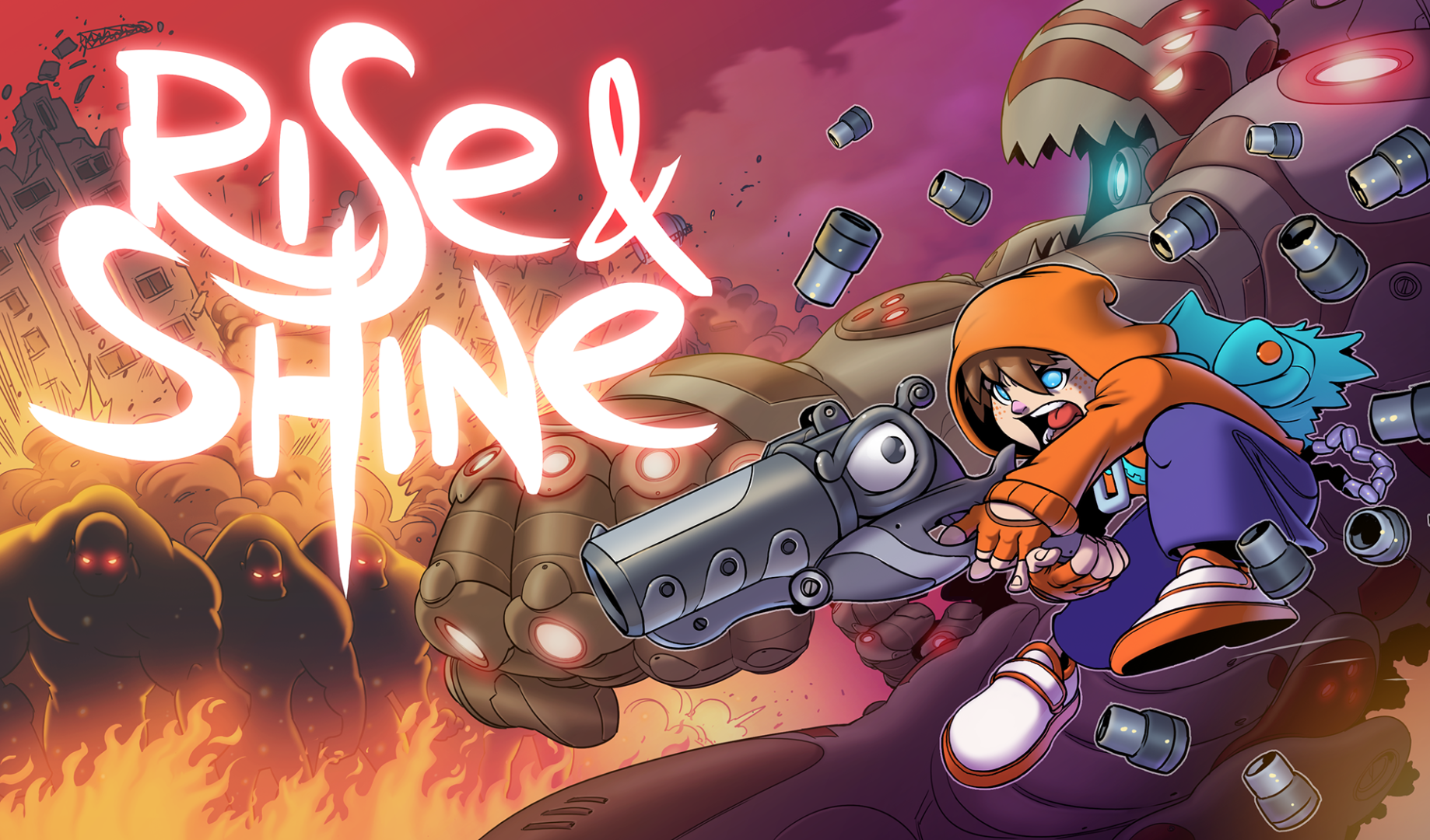 Adult Swim is an interesting publisher, with lots of cool indie projects such as Duck Game, Headlander or Volgarr The Viking. Unlike AAA publishers, Adult Swim does not seem afraid to give the developers a lot of freedom, and they tend to pick games with a good arcade feel. Needless to say, I am always excited to see which games they finance as there have never been any big disappointments. With that state of mind, I jumped into Rise & Shine without hesitation. 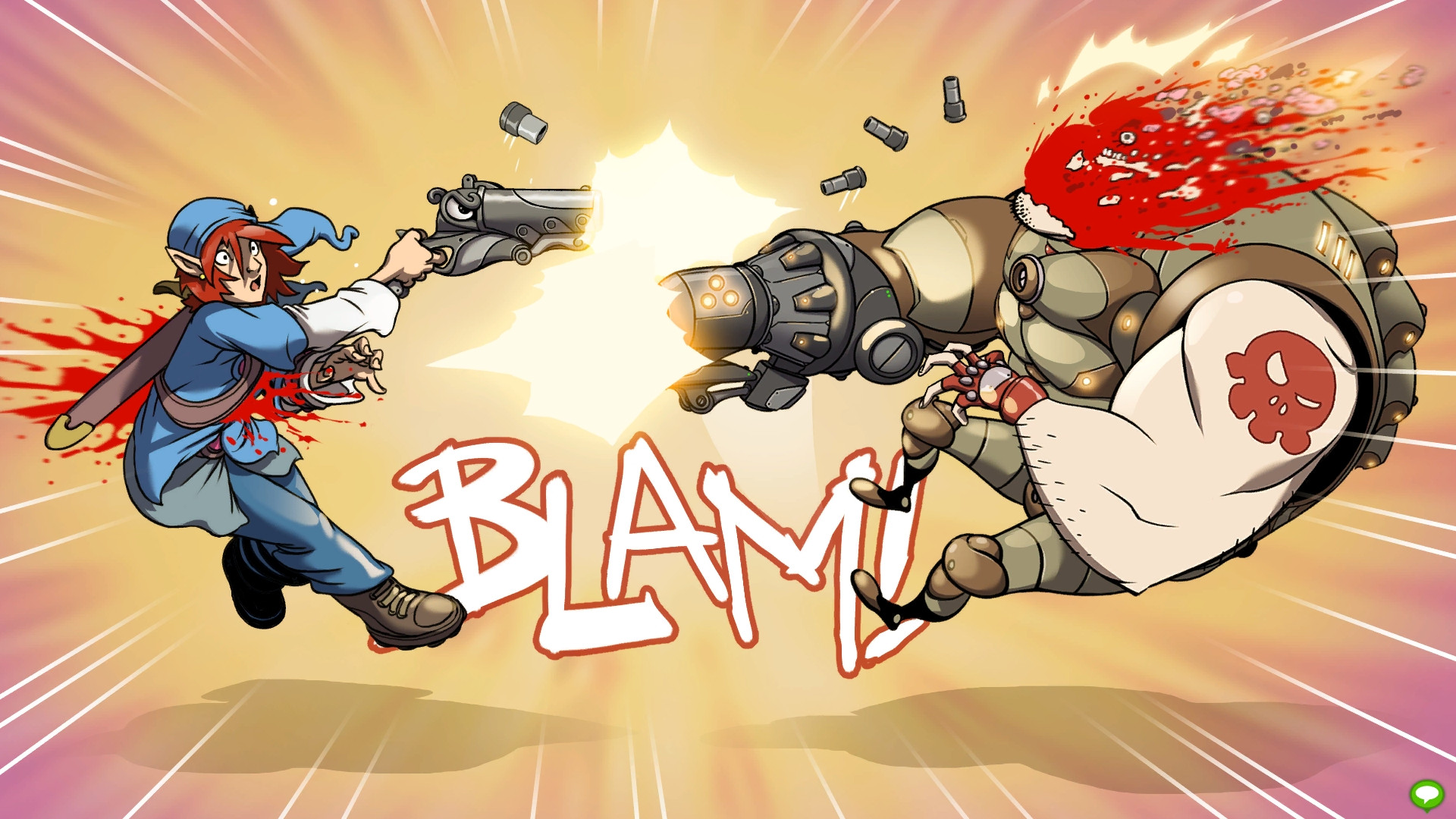 Rise & Shine is the story of a video-game world assaulted by the Gears of Wars-styled soldiers of the “nextgen” army. The legendary hero is finally out of respawns and dies, so the boy Rise picks up his gun Shine and they go together on a quest to save their world. The story told through comics is full of references and positively bonkers. While the breaking of the fourth wall is not a novelty anymore and has been done better here and there, I found that the additional spin on the villain made it compelling. Not a deep and amazing story, but good enough to be followed with interest for the short duration of the game. And by short, I must say four hours short. 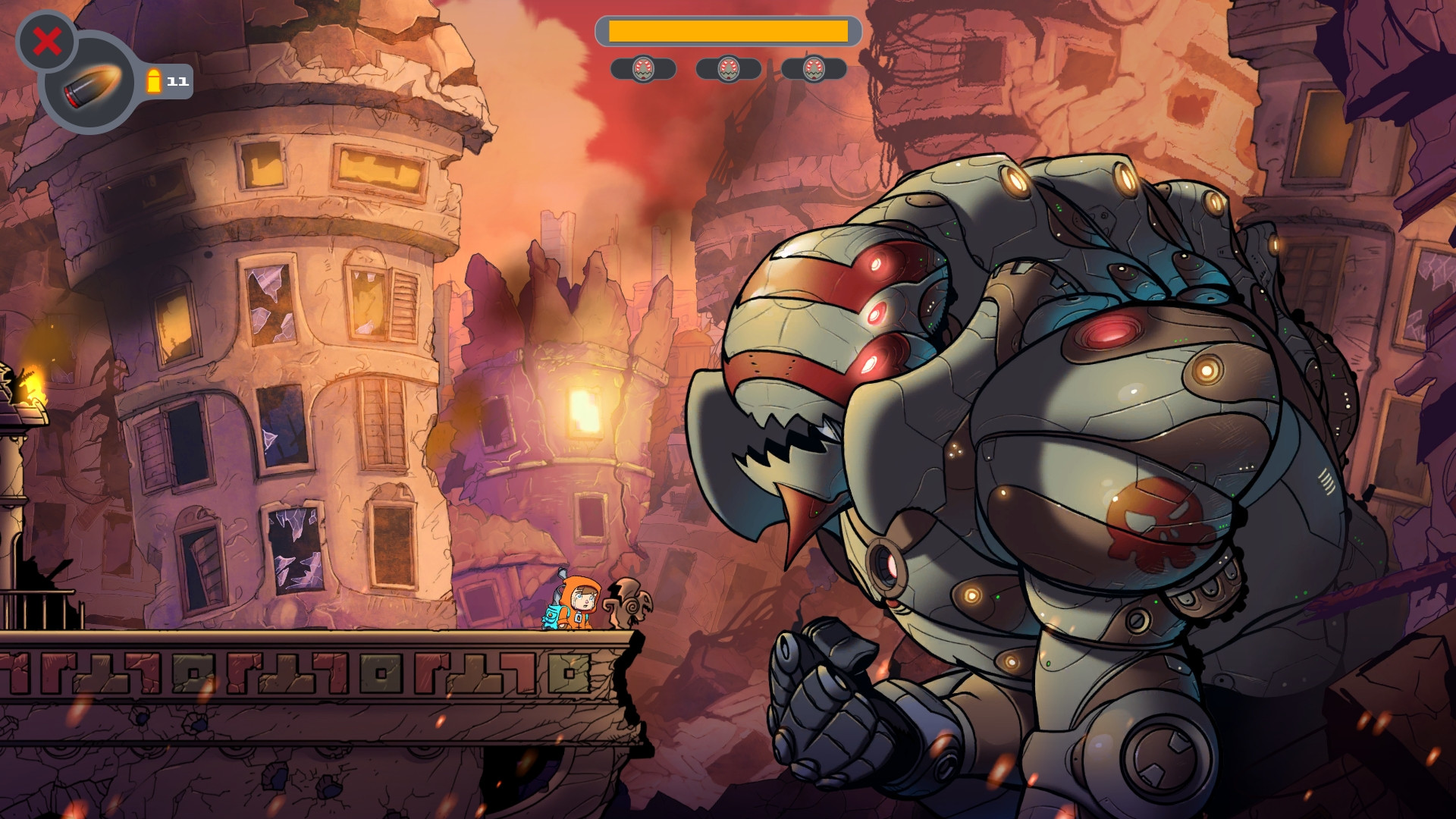 The art of this action platformer is absolutely luscious, with well-drawn high-definition backgrounds and beautiful robots augmented with light effects. The first contact with the game is really a special experience. I suppose that such a well-defined style is hard to scale and caused the game to be as short as it is. I usually don’t mind short games, especially if they are full of ideas and packed with details. However, Rise & Shine starts very strongly with a brilliant first chapter and then drops the ball for the next two chapters. There are still new light puzzles to keep things fresh, but the combat and more specifically its pacing eventually becomes stale. 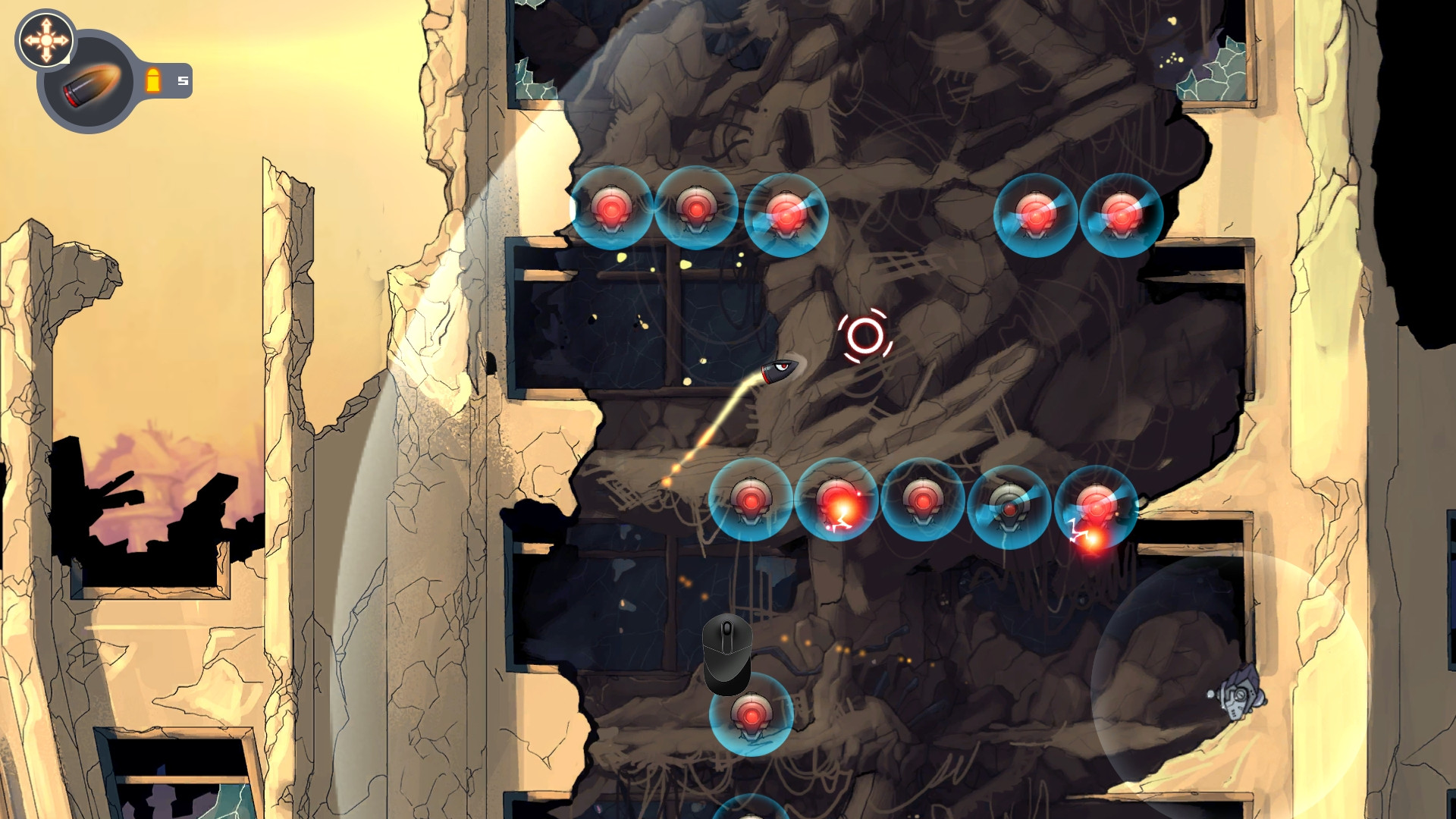 The developers Super Mega Team made a strange decision that in my opinion severely impairs the combat system. This decision is to force the player to draw the gun when it needs to be used, and keeping the weapon drawn prevents the player from moving around as quickly as before. This means that the player has to find a safe position first, then aim as if at the shooting range, shoot, and then finally move again. At least jumping instantly holsters the gun, but it does not save the combat from feeling stiff and frustrating. There are occasionally some covers to hide behind, which is very strange in a game that seems to have “nextgen” as the enemy because the cover system is an aberration coming from console shooters. Things take a turn for the worse when the grenade mod is added to the gun, as on top of being immobile the player has to keep pressing a button to raise the arc of firing, and then press another button to fire then detonate. While you are in the middle of a fight trying to avoid incoming projectiles this is very fiddly and impractical, especially considering that the player dies in one or two hits. An additional bother to this system is that there are three firing systems: normal, grenades and remote control. Remote control is nice, the bullet can be controlled with the mouse and it is used for a few puzzles. However, switching from one system to the other is done by pressing Q rather than quickly accessing the one you want with 1, 2, 3, which adds to the confusion when things need to be done quickly on the battlefield. There are also two types of bullets, electric and armor piercing, but they are way underused during combat and anyway it adds to the confusion of too many button presses. Thus my main problem with the combat system of Rise & Shine is that it tries to mix puzzle and action, however the controls and stiffness do not suit the action part, while the unforgiving deaths and the fast pace do no suit the puzzle part. At least there are a lot of checkpoints, even though somehow I had to repeat the final boss because my next death was slightly too far to the left of what it should have been and it brought me to a prior checkpoint. 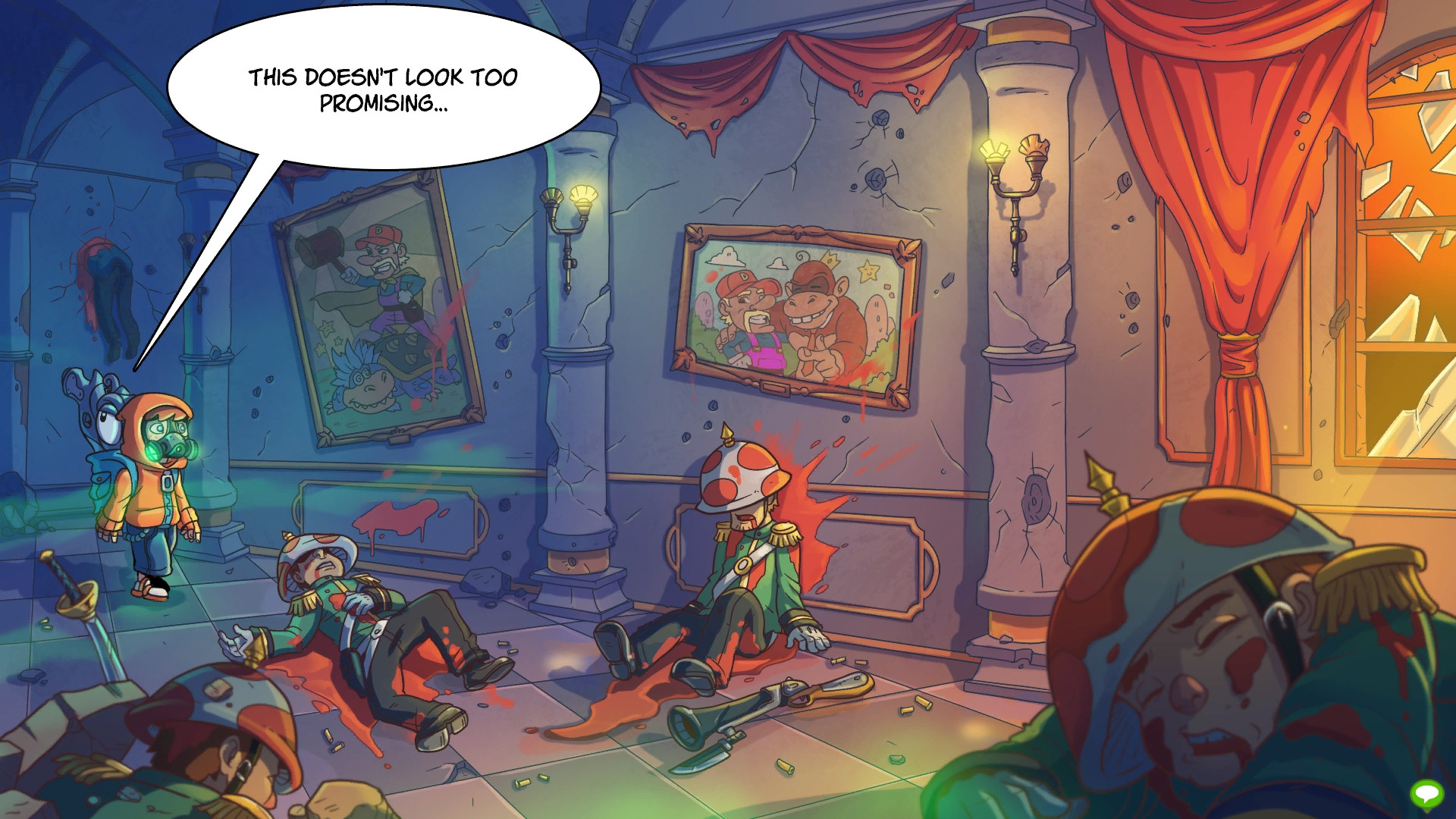 In conclusion, Rise & Shine has a fantastic first chapter before the combat system starts to become confusing and impractical and before the levels lose the edge of the dynamic beginning. I still had fun here and there trying to figure out the puzzles, each boss fight was a treat, but overall I could not help but feel a bit disappointed. The game tries to be different, but it eventually works against itself and has a tough time keeping it fresh. I recommend trying it, especially for the great first chapter, but if you are short on money wait for a sale. Save it for later.

Here is a video review: