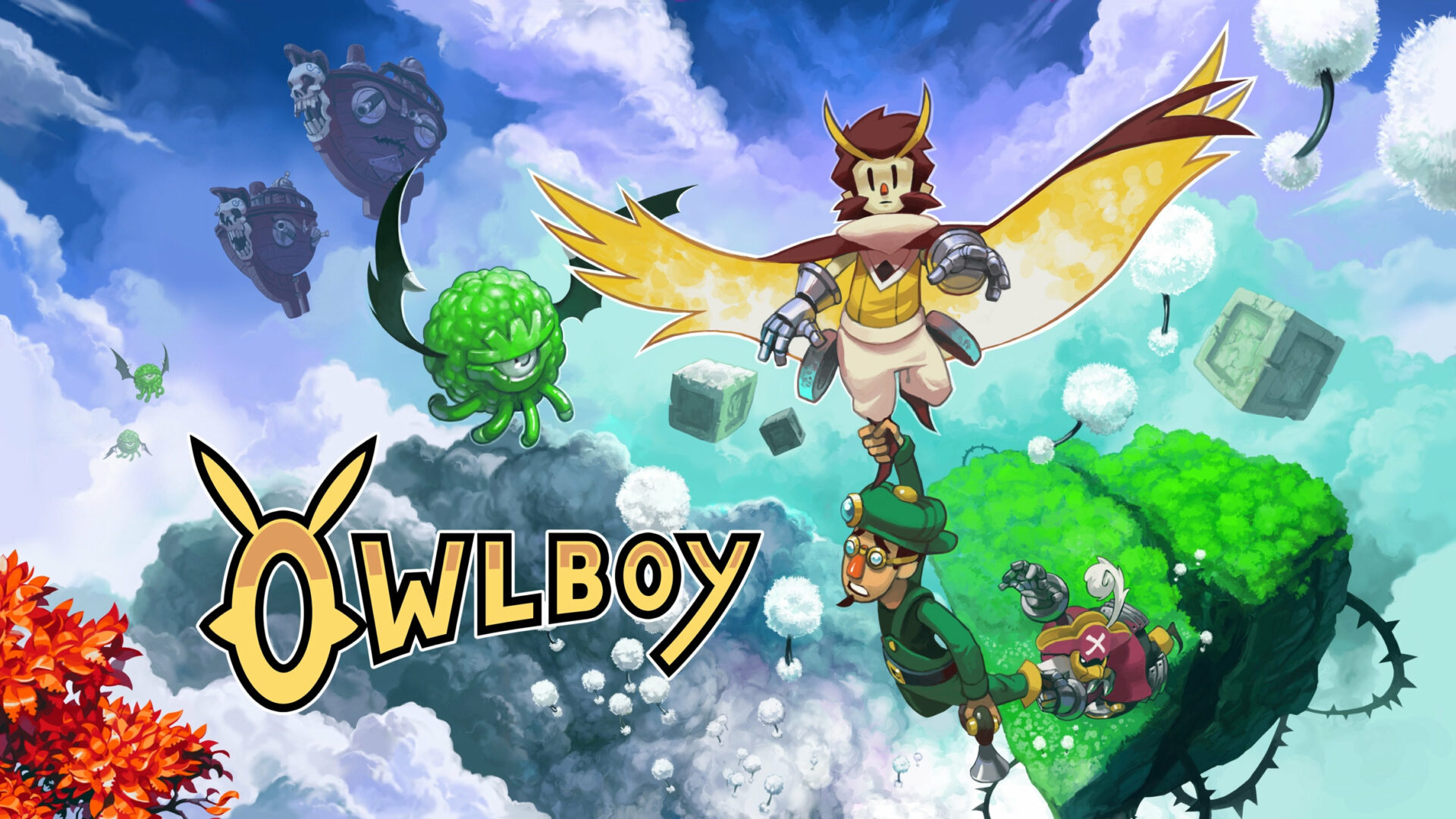 Owlboy has been announced years before release and garnered much more attention than other indie games for a simple reason: the pixel art is breathtaking. Was the development, lasting for about a decade, worth the final result, and are the gears hiding behind the style competent enough to set it all in motion? Let us find out. 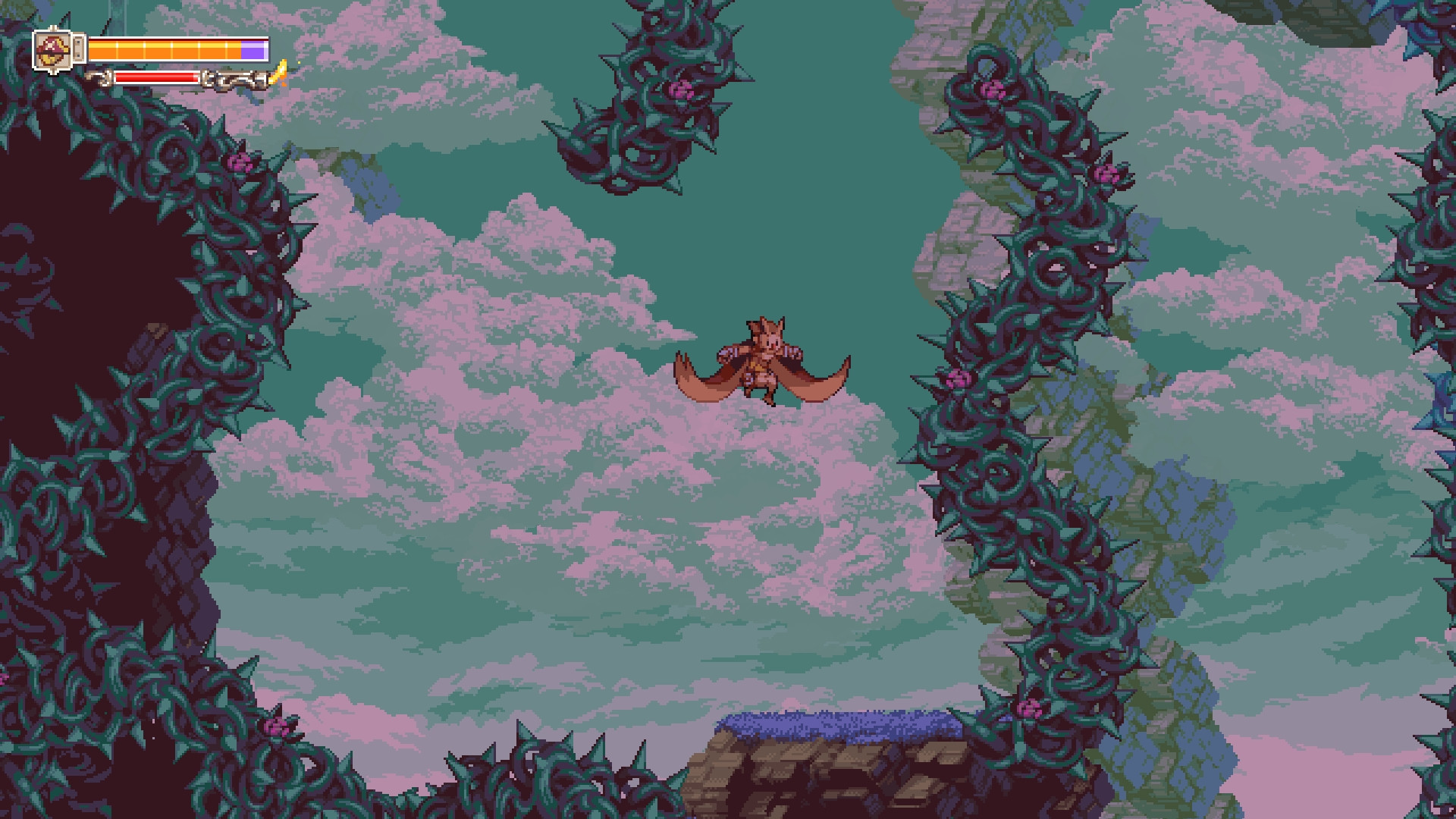 Owlboy is not a typical platformer. For one, the main character Otus belongs to a species that seems to be a mix between owls and humans, and thus he can fly right from the start and progressing through the game is impacted by this ability. Additionally, the levels are not isolated from the others, they are interconnected within the confines of the world of the game. Here and there a few areas can only be reached upon acquiring a new power, which tends to remind of Metroidvanias. However, the semi-open layout and feel is maybe more similar to a Zelda game with temples to find. Reaching new areas is guided in a linear way, and despite the ability to fly there are a lot of rocks and passageways to restrict freedom. This is all well done, to give the feel of being on an adventure and promoting exploration without losing the player. 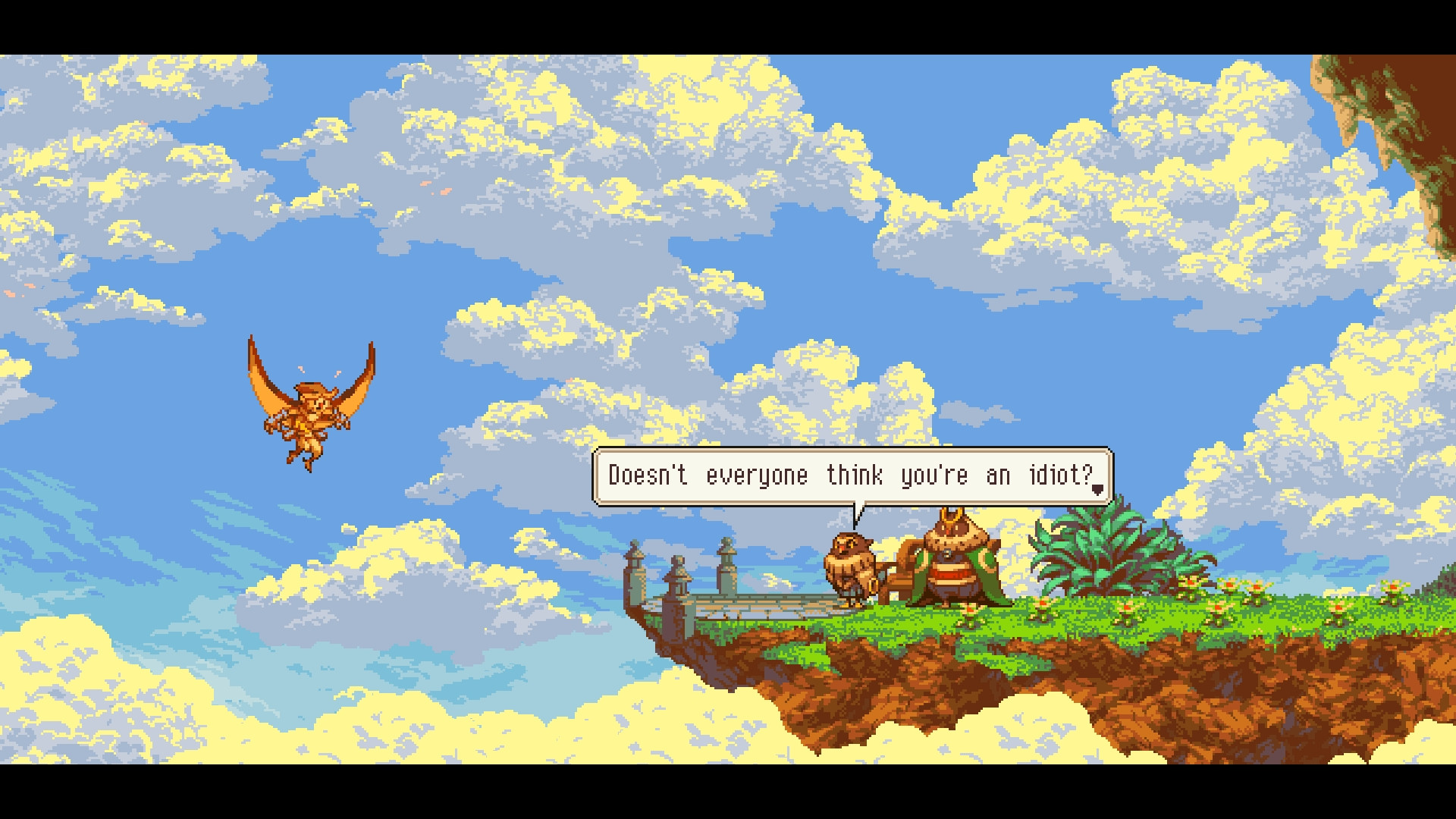 Progression and abilities are all deeply linked with the story. I am usually not one to care much about stories and dialogs, but I must admit that Owlboy managed to catch my interest with its characters. The whole cast is interesting with each one having its own colourful personality and mimics. Body language is well used, especially considering that the main character Otus is a mute and expresses visually his sadness and happiness with his face and gestures. The dialogs are all excellent, from the more dramatic parts to the frequent comedy. This game really has a lot of heart. Furthermore, Owlboy is a fine example of the “Show, don’t tell” mantra. Let’s take the villain, Captain Molstrom. His steps cause the ground to shake. He does not need to talk big, he just goes on a rampage and destroys a city while the camera follows him. Friendship and comradeship among the main cast is also not just a product of the cutscenes, it bleeds into the game mechanics with Otus’ ability to carry people and combine forces to move and fight. 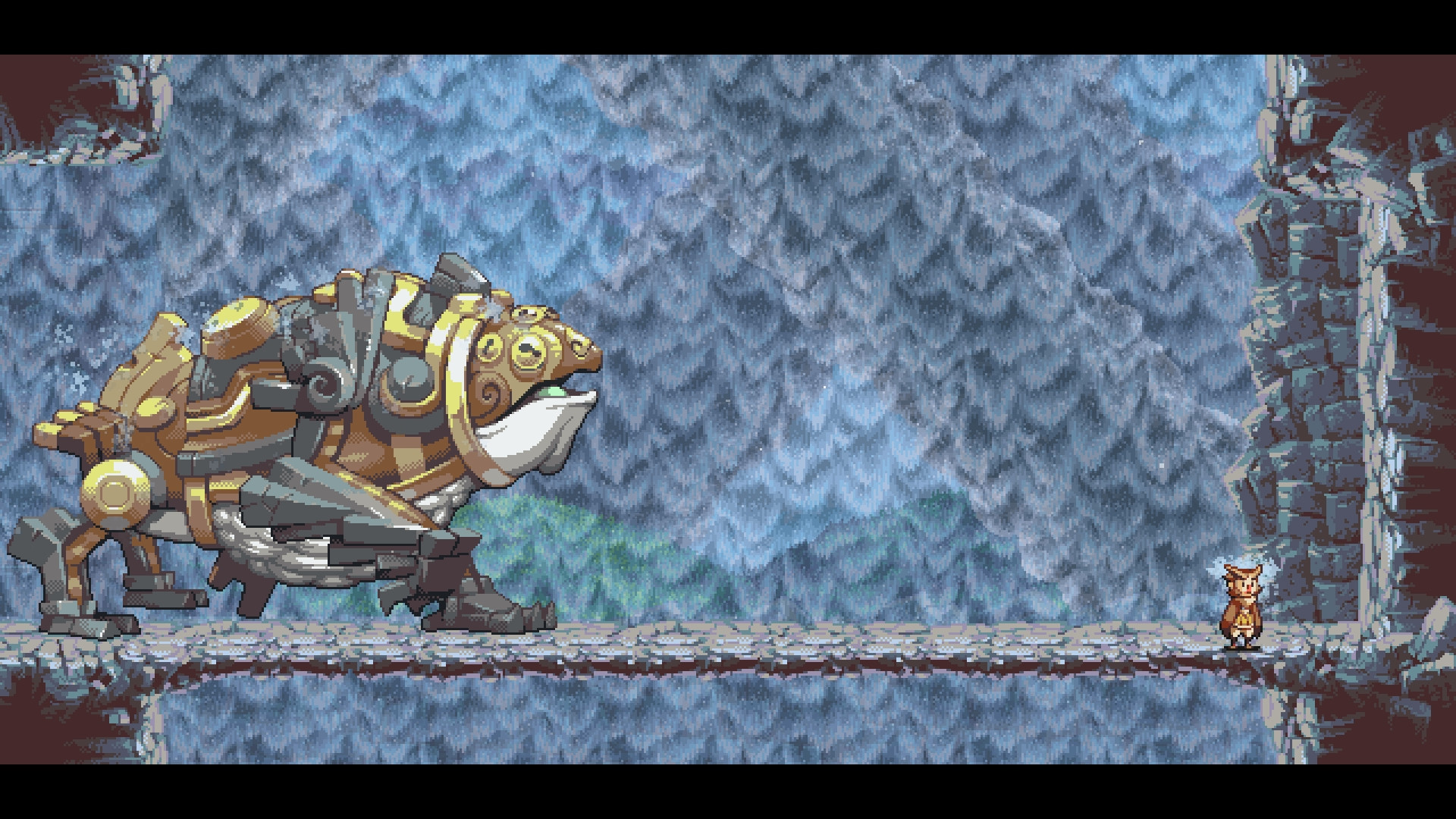 Besides the well done flying mechanic, this is where the uniqueness of Owlboy also lies: while the main character can fend off attacks with a spin attack, combat is mostly done by picking up friends and using their weapons. Controllers benefit from an auto-lock, thankfully absent from mouse controls with which the game feels right at home. The controls are absolutely perfect, and there are several convenient ways to switch between the characters by teleporting them and using the right ability at the right moment. Just a bit annoying that while being hit Otus stops holding his friend and they have to be summoned again. 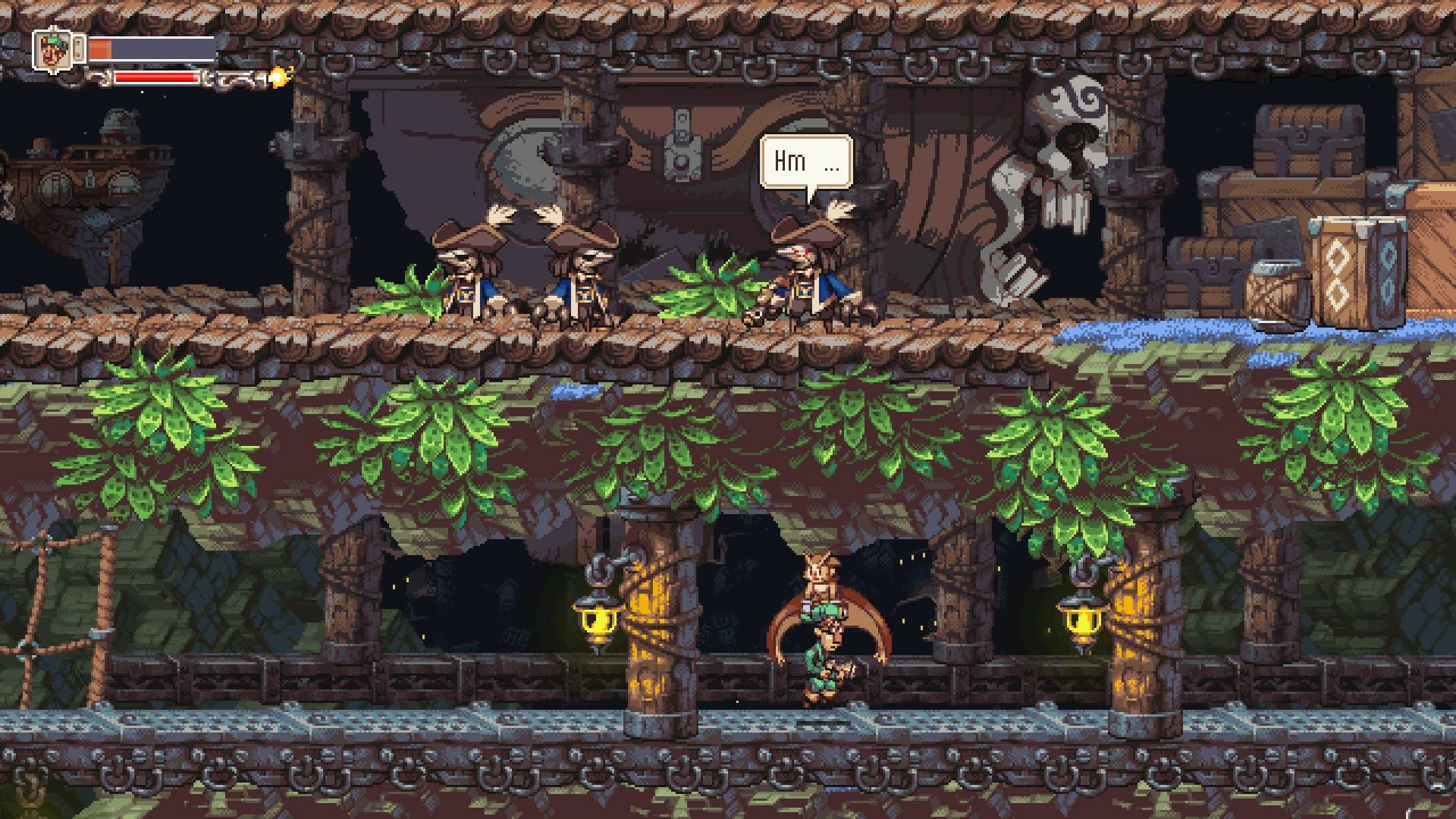 Strangely, those unique and original game mechanics are both a strength and a weakness of the game. Aerial combat is much more static than jumping, and the abilities have been balanced not to be too powerful and therefore lack a bit of “fun” to use. While Geddy the first character has a weak blaster, the next recruit has a powerful shotgun that would completely outshine the blaster if the shotgun was not so slow to recharge, making it more like a surgical attack rather than an all-around base weapon. Further complaints about this shotgun extend to its range that is hard to estimate, and the screen flashing red upon use. Yes it shows the violence of the weapon, but as a consequence I could not properly see what was happening and I always thought that I was being hit at the same time. 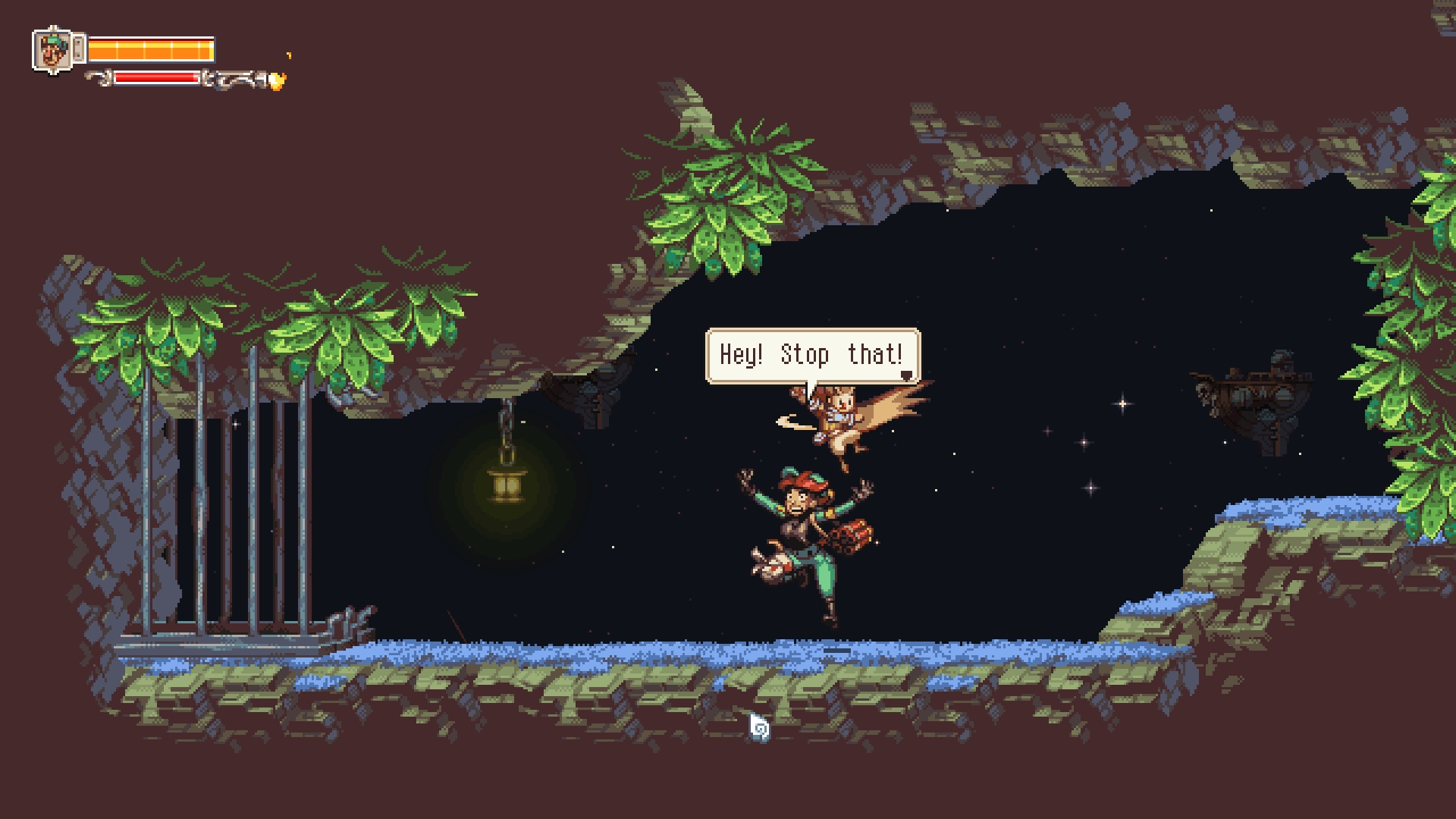 Since we are queuing for the complaints department, let us talk about the cannon challenge. There is a side-quest that eventually culminates in a cannon mini-game propelling Otus at high speed while having to steer right or left to avoid hitting walls. If it was an optional element just for a single achievement, then yes sure why not. However, my problem here is that this challenge also contains some gold that is required to finish another side-quest, the one about finding all gold and unlocking a final upgrade. This final upgrade to movement speed comes when all the game has been explored which makes it rather useless while it would have been useful before. On a side-note about exploration, some gold can only be found behind hidden walls. There are no visual hints, if you want to 100% the game you will have to hit your face against every wall in the game to check which can in fact lead you to a secret area. Distasteful.

But I digress, I was talking about that awful cannon challenge required to 100% the game that soured an otherwise really good ending. This is the kind of awful activity that you have to repeat over and over for hours until you have the perfect muscle memory to pull it off. While it was fun in some games like VVVVV, here it is badly done for several reasons. The first being simply that flying at high speed is not the same game mechanic as the rest of the game. The second is that for each attempt, there are many seconds lost to being propelled by the cannon once again for a long distance before being able to take control back, and this huge lapse of time offset my muscle memory. Thirdly, it’s beyond difficult. The kind of difficulty that will prompt some clowns to reply “git gud” to people complaining. Well, I did “git gud”, I am in the Top 50 of the leaderboard and I still find this absolutely dreadful. I also happen to value my time as more precious than wasting hours doing the very same thing over and over again. I will now list some real-life experiences that I suppose are more fun than this cannon challenge: Swallowing a box of nails. Being mauled by a grizzly bear. Pulling an eel out of your nostril. Bashing the skull of an Owlboy developer with a mechanical keyboard. 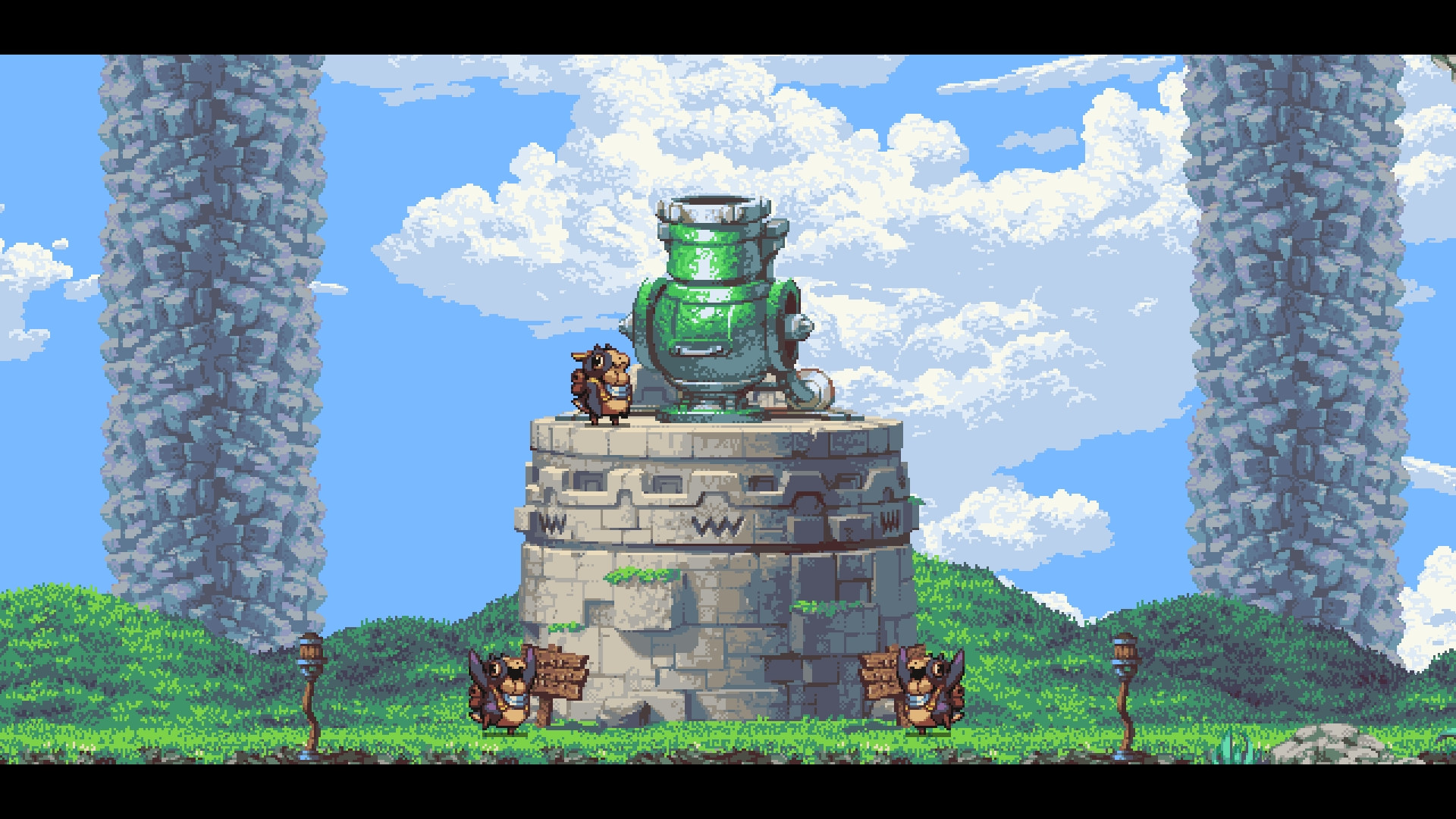 Overall, the level design makes some use of the abilities at the player’s disposition, but as I mentioned earlier it is not often very fun in the combat department (except for all the cool boss fights), and some areas can overstay their welcome. Especially that jungle-themed level in the dark. To me the highlight was the first assault on the pirates, from the fantastic music to the background it really felt like a war was going on. However, these same pirate levels are sometimes annoying because every few seconds the camera is wrenched away from the control of the player to show a door being locked or unlocked. Literally every few seconds when moving in and out of sight of the pirates. Overall, if I had to situate Owlboy among recent platformers I completed, I would say that Shantae has better level design and more fun gameplay despite a weaker structure and story, and finally RIVE sits at the top in terms of fun and level design. Where Owlboy takes the spotlight is in regards to the story and of course the graphics.

Superb. Gorgeous. Amazing. Splendid. The graphics are beautiful and teeming with life and character. And what’s even more crazy for 2D pixel art with such a high level of detail, is that there is a day and night cycle. I was stomached, I did not even think that it would be possible. The music enhances the scenes greatly. 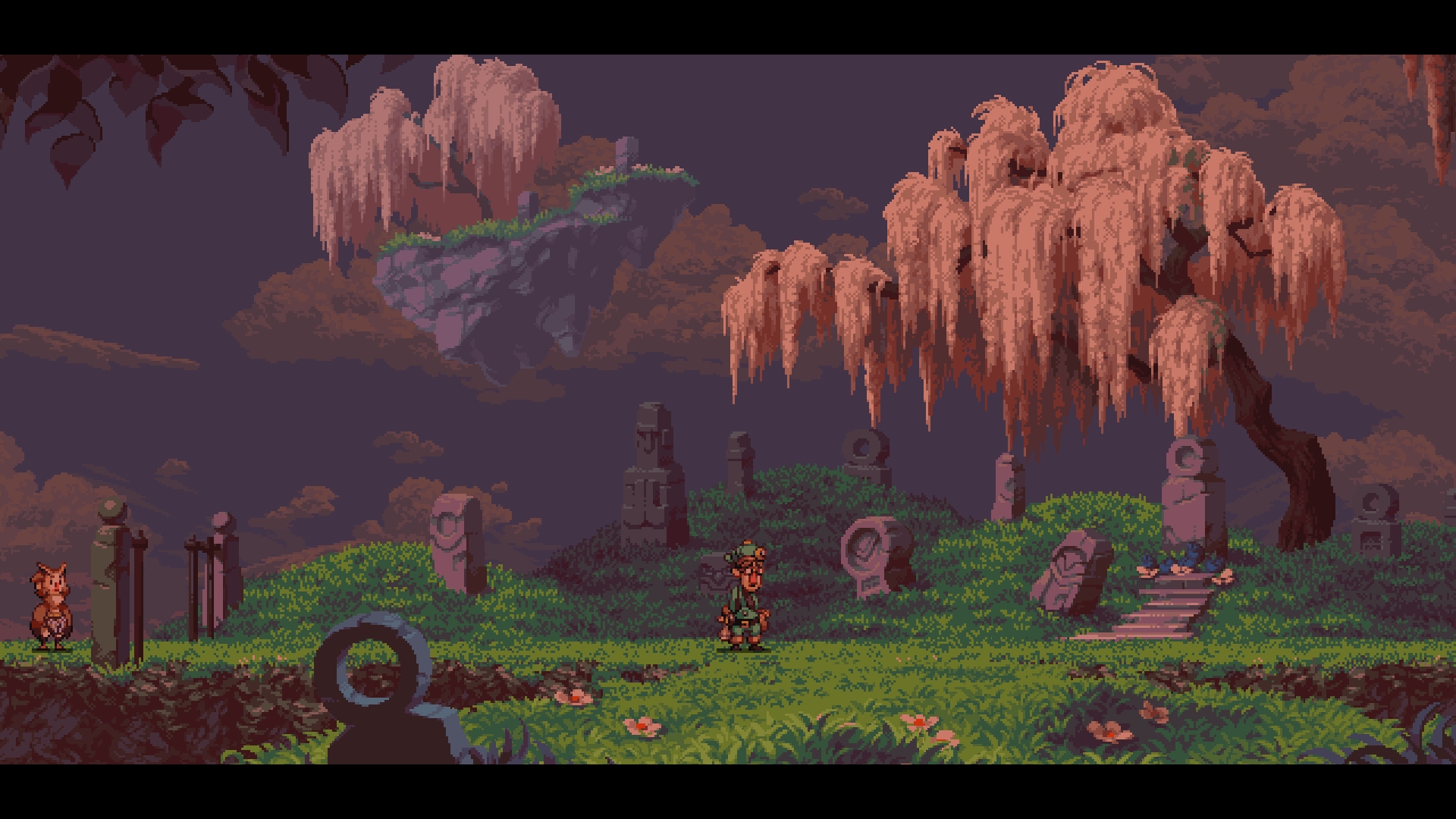 As a conclusion, Owlboy is a gorgeous and unique game. Well-written dialogs, with a story deeply intertwined with unique game mechanics that are both the highlight and the undoing of the game. For all its care and cleverness, the level design and the combat are never really fun enough. Some minor false notes made worse by secret walls and that dreadful cannon challenge. Owlboy is good and a memorable addition to your collection, but not the masterpiece that some wished it to be.