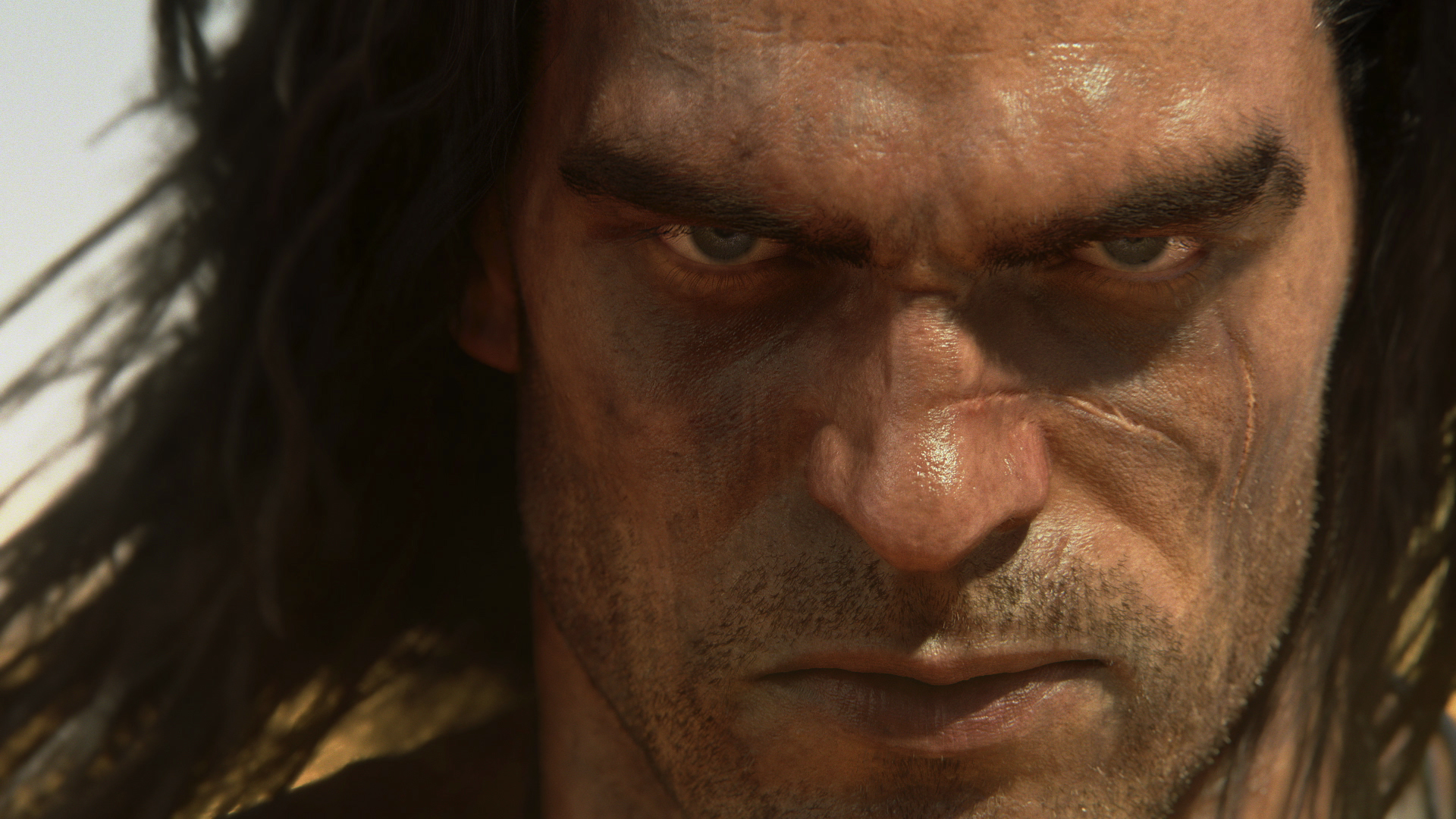 A still rough around the edges 3D survival RPG set in savage fantasy world, which will surely put your survival skills to the test!

General Impression
I’m sure that most gamers, comic book readers or film enthusiasts have heard of Conan the Barbarian, at some point in their lifetime. It’s the iconic definition of a savage warrior in an equally savage world, in which physical strength is crucial to your survival. Utopic Social Darwinism or not, the genre has had its fair share of popularity in the pulp fiction of the ‘30s and mid ‘40s. Arnold Schwarzenegger’s unintentionally hilarious performance while starring in the two (now cult classics) Conan movies from the 1980s, most certainly revived interest in everyone’s favorite barbarian. Conan Exiles has quite a legacy to uphold and, for the most part, it manages to convey the savagery of the fictional lands inhabited by Death at every corner. Developer Funcom has had extensive experience with adventure games in the past and MMOs in more recent times. So no rookie dev looking for a quick cash grab while making empty promises. *cough* Hello Games? *cough* 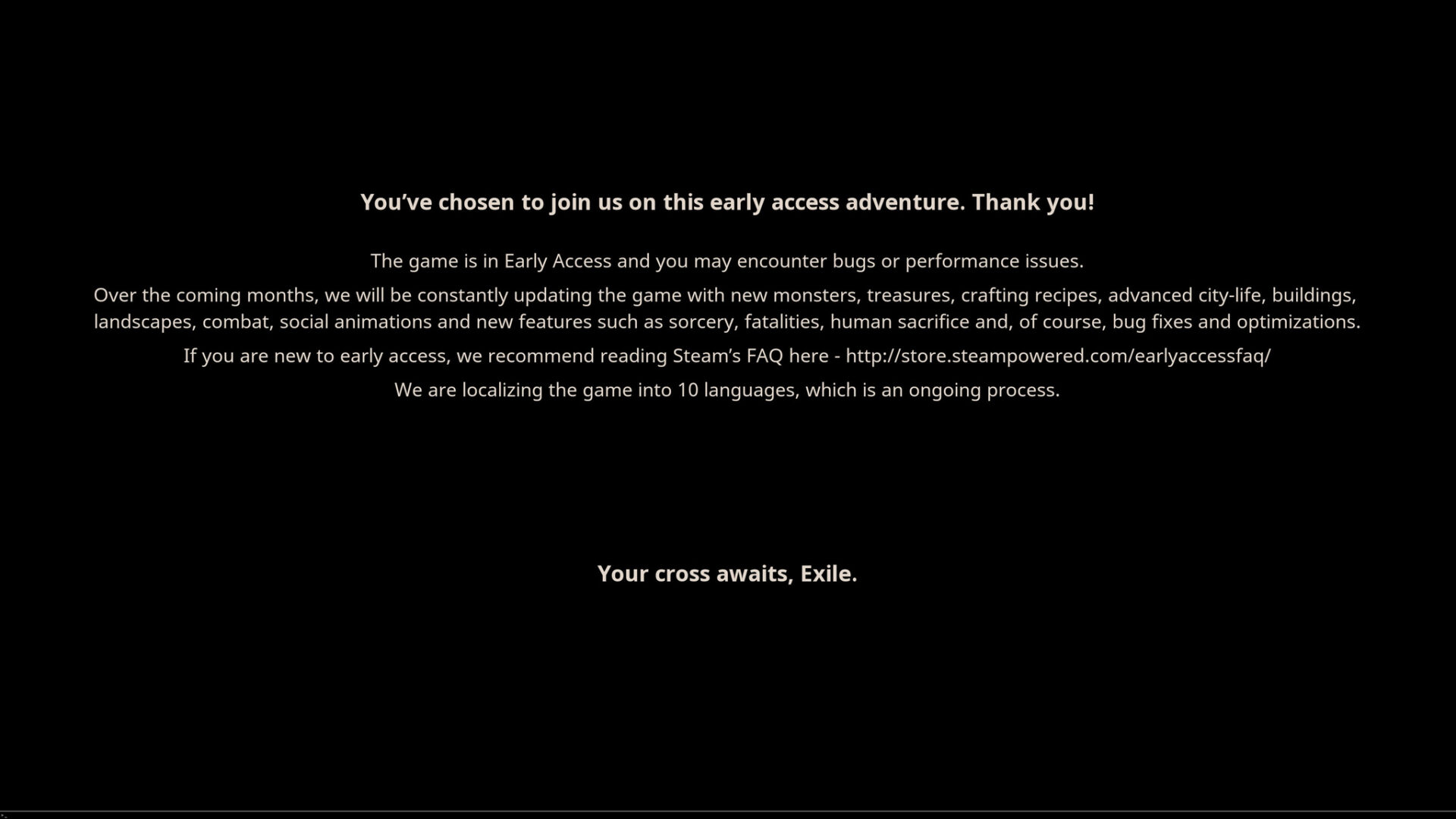 I found the game’s initial difficulty scale quite refreshingly in tone with the source material’s themes. As an Exile in a strange and deadly world, you don’t need someone holding your hand and you have to make do with what you find for yourself and craft, eat, find shelter and ultimately survive or die trying. I would still have implemented a bare bones tutorial of sorts if nothing more. Anything is better than having to quit the game and head to its Community Hub on Steam while hoping that the Guides already published there might shed some light on the game’s aim and fairly complex crafting mechanics. For a novice player in survival games (multiplayer centric as well) the start of Conan Exiles must be confusing to say the least. The title could have only benefited from a proper introduction, instead of just cutting you loose at the outskirts between a desert and an oasis. 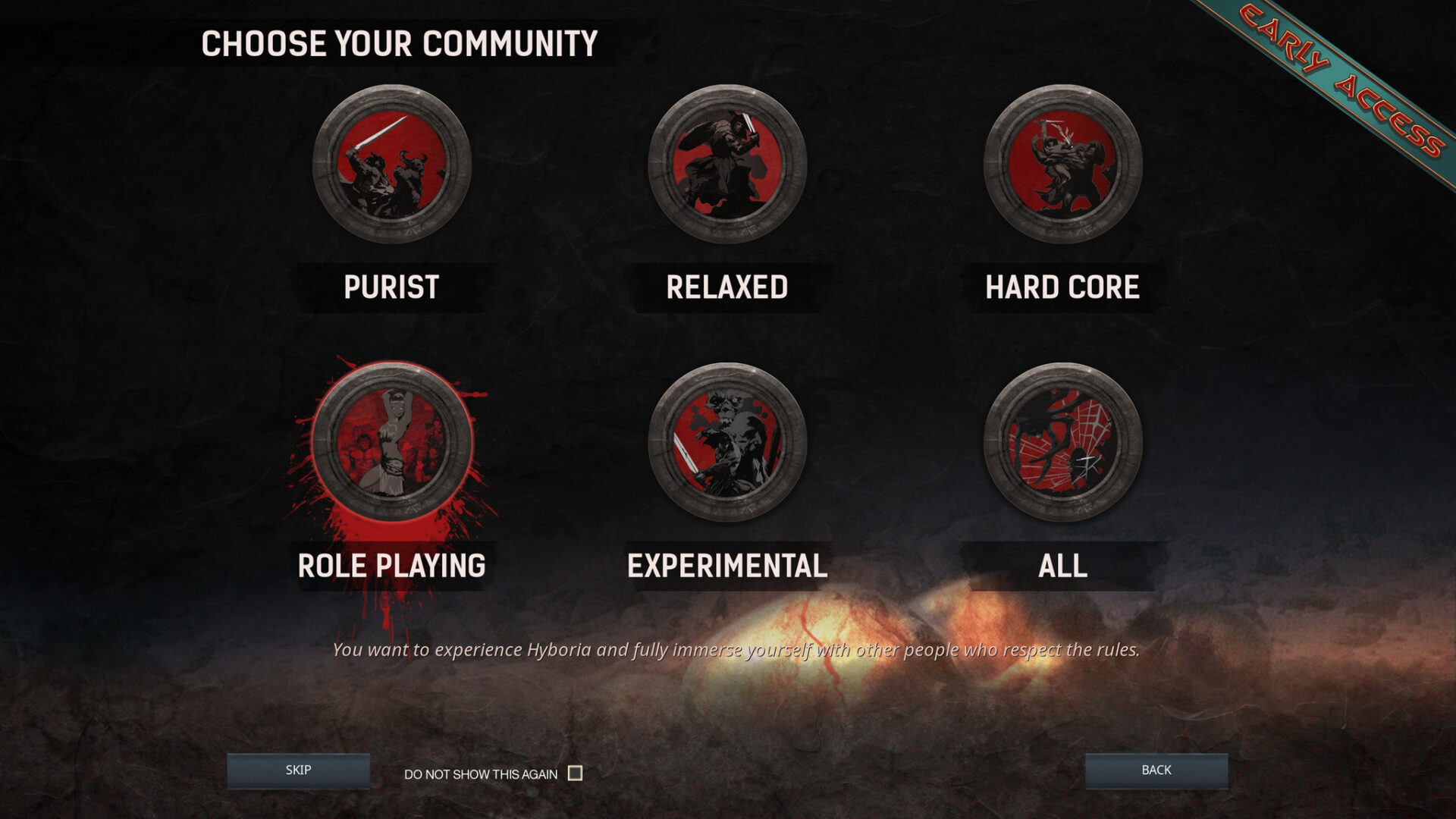 Even if it’s barely explained, I can’t deny the appeal of this game and its encouragement in regards to freedom of choice. A few lore bits are scattered around but other than that, you can head in any direction of the sizable map you wish without much interference from the wildlife, if you keep your wits about you. It is true that strength is a paramount trait for a barbarian, but I strongly recommend you invest your initial points in Vitality and Survival. Yes, Conan Exiles features an RPG character progression system that provides both skill and attribute points as you level-up. Speaking of that, you seem to increase your level outside of combat too, simply by gathering resources, materials and then using them to craft tools, weapons or even structures. If you do wish to be constantly on the move and travel across the map, that is by itself a feat worthy of any warrior. 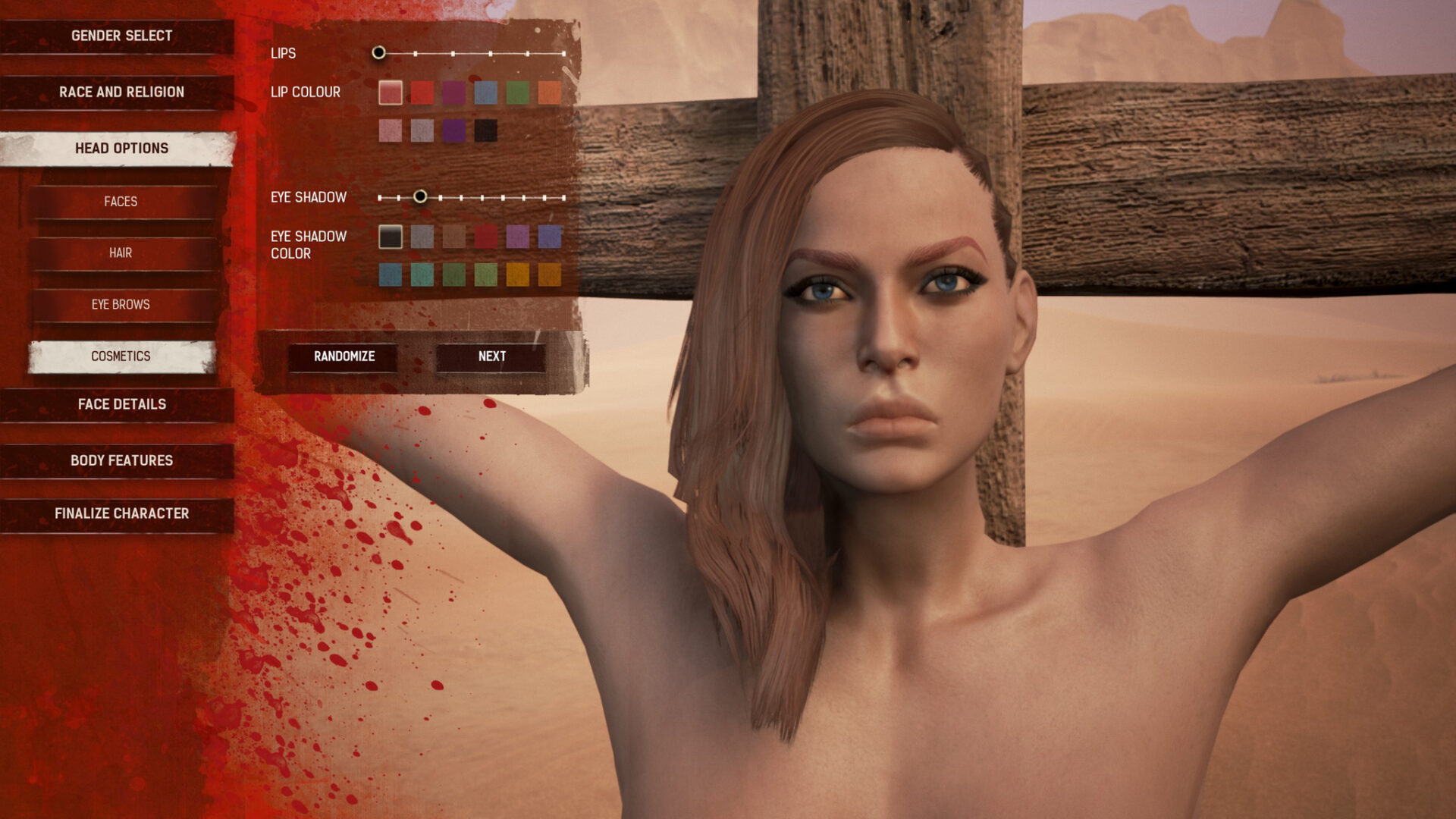 Provided you find a peaceful spot on the map where something or someone isn’t trying to eat you, you can settle down at least for a bit, while putting your architectural proclivities to the test. My advice in this regard would be an initially small sandstone hovel, built on one of the several islands near the starting position of your journey into exile. Why build in a relatively secluded place? Simply because the odds of critters or hostile natives spawning near your place of rest are minimal. Beware of getting too close to crocodiles before you’re able to craft some proper armor and weaponry. Also, treat most NPCs with caution since I’ve only met a handful that don’t attack you on sight. Most creatures found while you’re still low-level will happily ignore your presence if you maintain a safe distance. 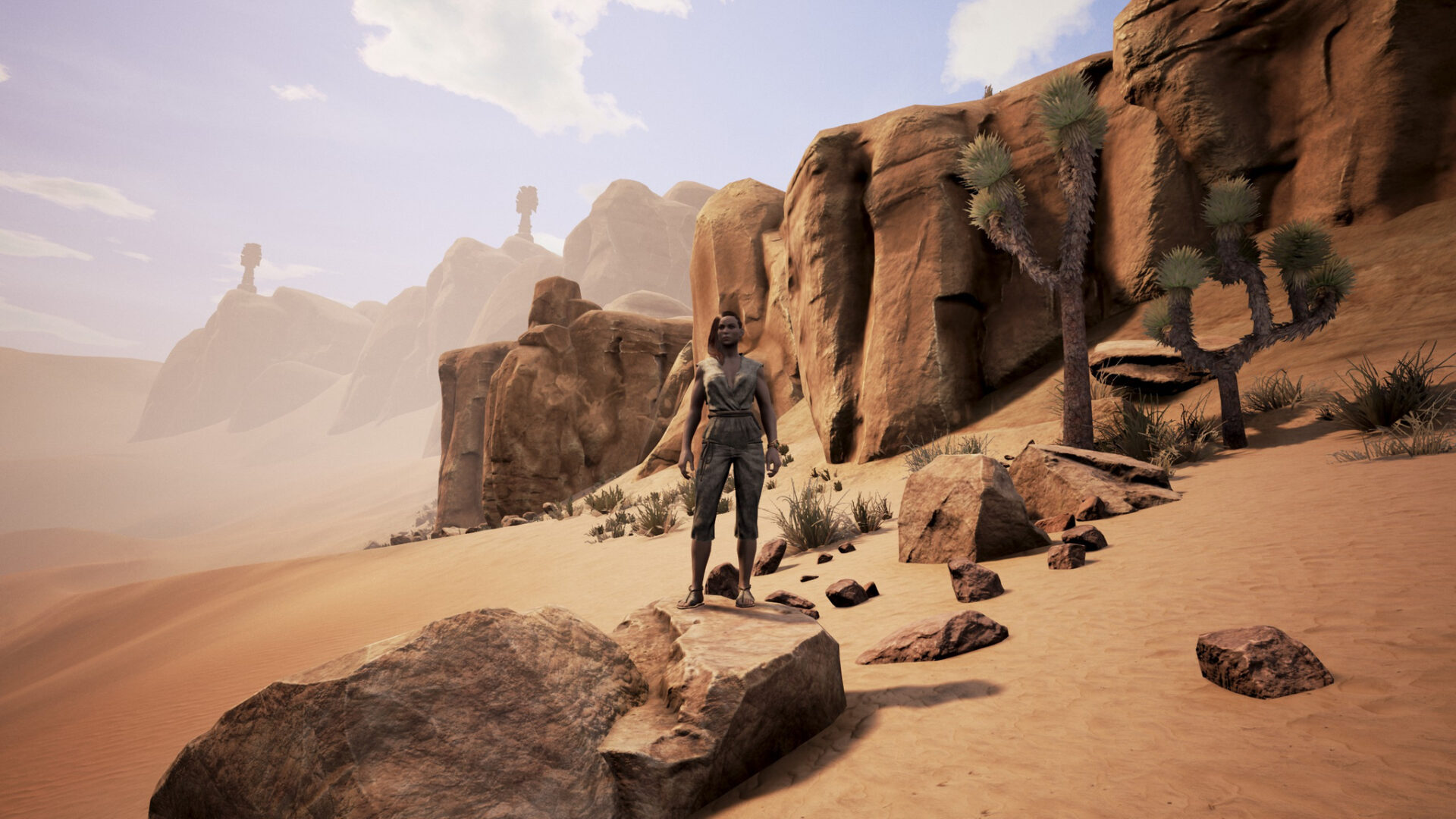 It would be a blatant understatement for me to accuse Conan Exiles of lacking in activities. Everywhere you look there’s stuff to gather and things to kill. Timber to chop, stone to mine, plants to harvest, wildlife to hunt, buildings to erect and natives to defend against. Even PvP combat, should you be inclined towards a truly competent form of opposition. I just wish the game would provide a backbone to all of this. A storyline worthy of Conan’s fantasy setting and something to certainly set it apart from ARK: Survival Evolved and Rust. All three titles seem to remain close to Early Access status though, at least for the foreseeable future. And yes, you don’t have firearms in Conan Exiles. THAT would have severely been out of place. Dev team promises the implementation of sorcery though, so you won’t be left wanting for very long. After all, slashing, bashing and shooting arrows gets boring eventually. 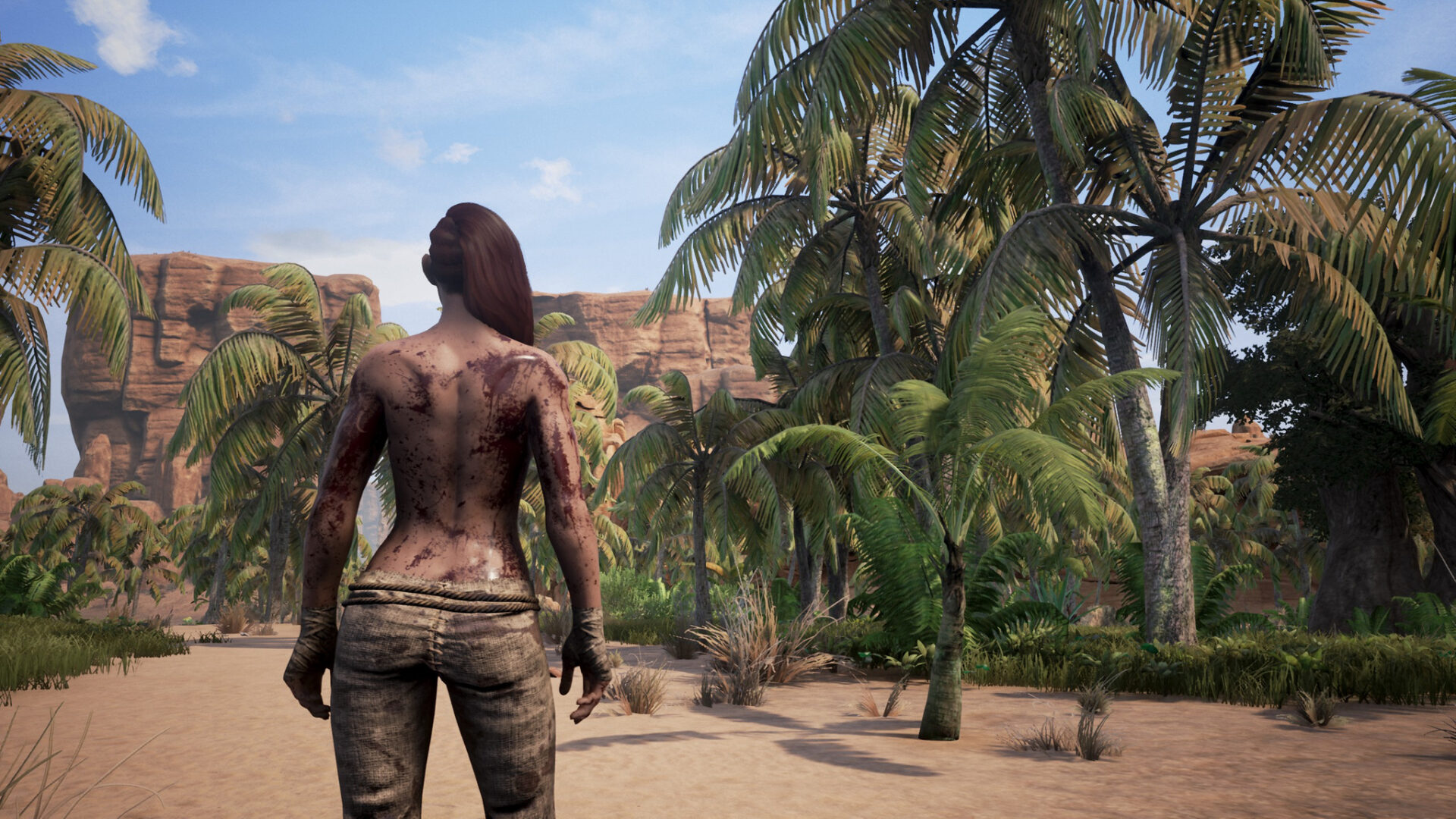 The gameplay is diversified enough, as are the enemies and resource distribution. What about game modes? You’ll be satisfied to hear of both the “relaxed” character of singleplayer (as much as hosting your own server, and the haste with which you learn to survive, can provide) and the fiercely combative nature of multiplayer servers where you can guess how well you can mingle with the other players. Never played DayZ for a considerable amount of time, but I still recall the fact that monsters weren’t the true threat to your survival. Other human players were. So the multiplayer experience has always been met with mixed feelings by myself but that should certainly not deter you from joining someone else’s server instead of creating your own. There are sufficient options to be taken into account upon creating your own “playground”. Slides with modifiers for anything from experience gain and down to food spoilage rate. 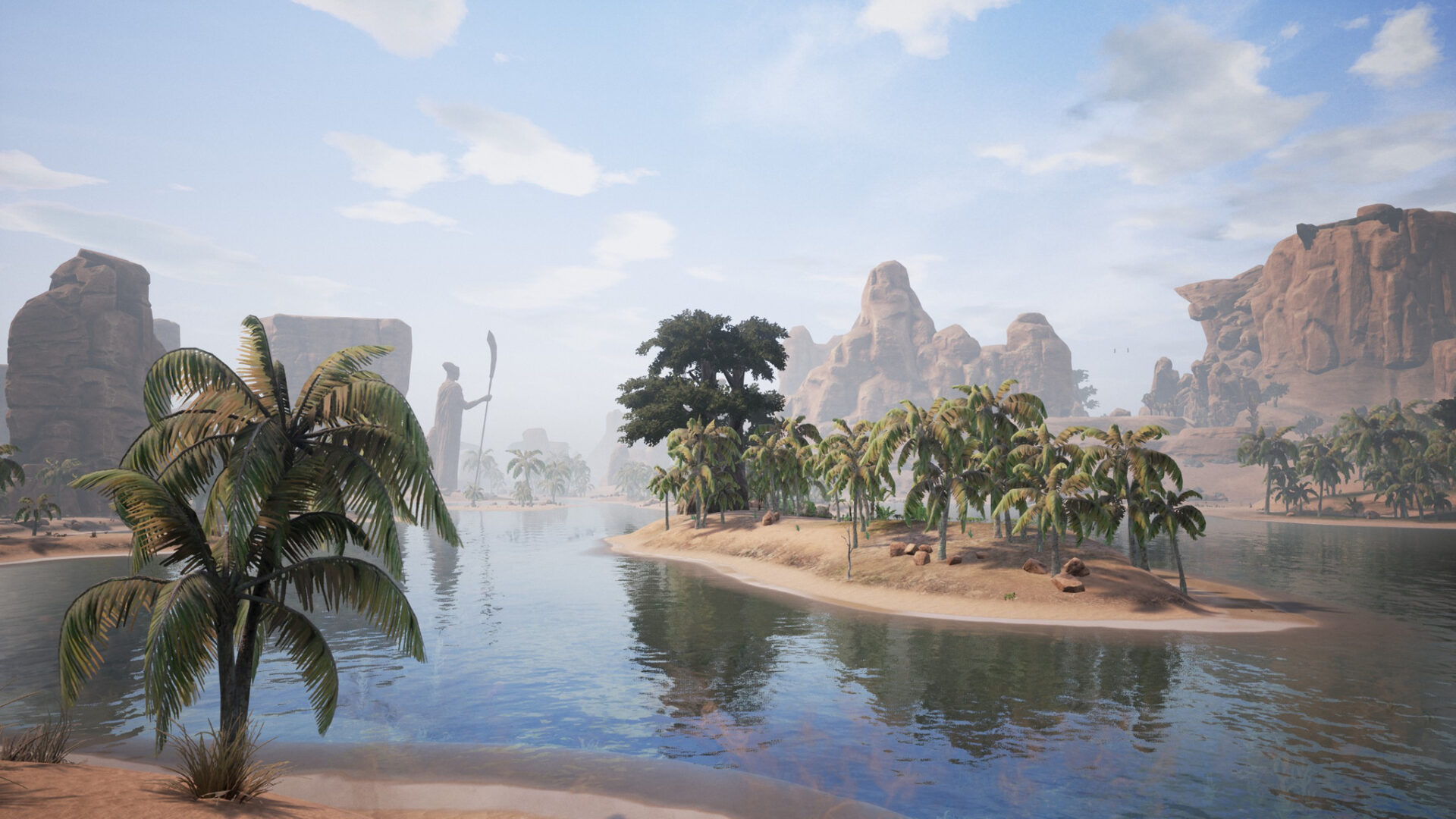 Graphics are beautiful, courtesy of the Unreal Engine 4. Does that beauty also allow for a smooth experience? I’d say that’s still debatable for now. I never expected to run the game maxed out on 4K resolution and stable 60 frames per second. But even 2K res was met with stability issues as I had seemingly random frame rate drops and it was definitely annoying. On an overclocked GTX 1070, I might add. I was simply flabbergasted when the “mighty” GeForce Experience software suggested that I play the game at 4K and medium details as OPTIMAL settings. Are you for real, Nvidia? 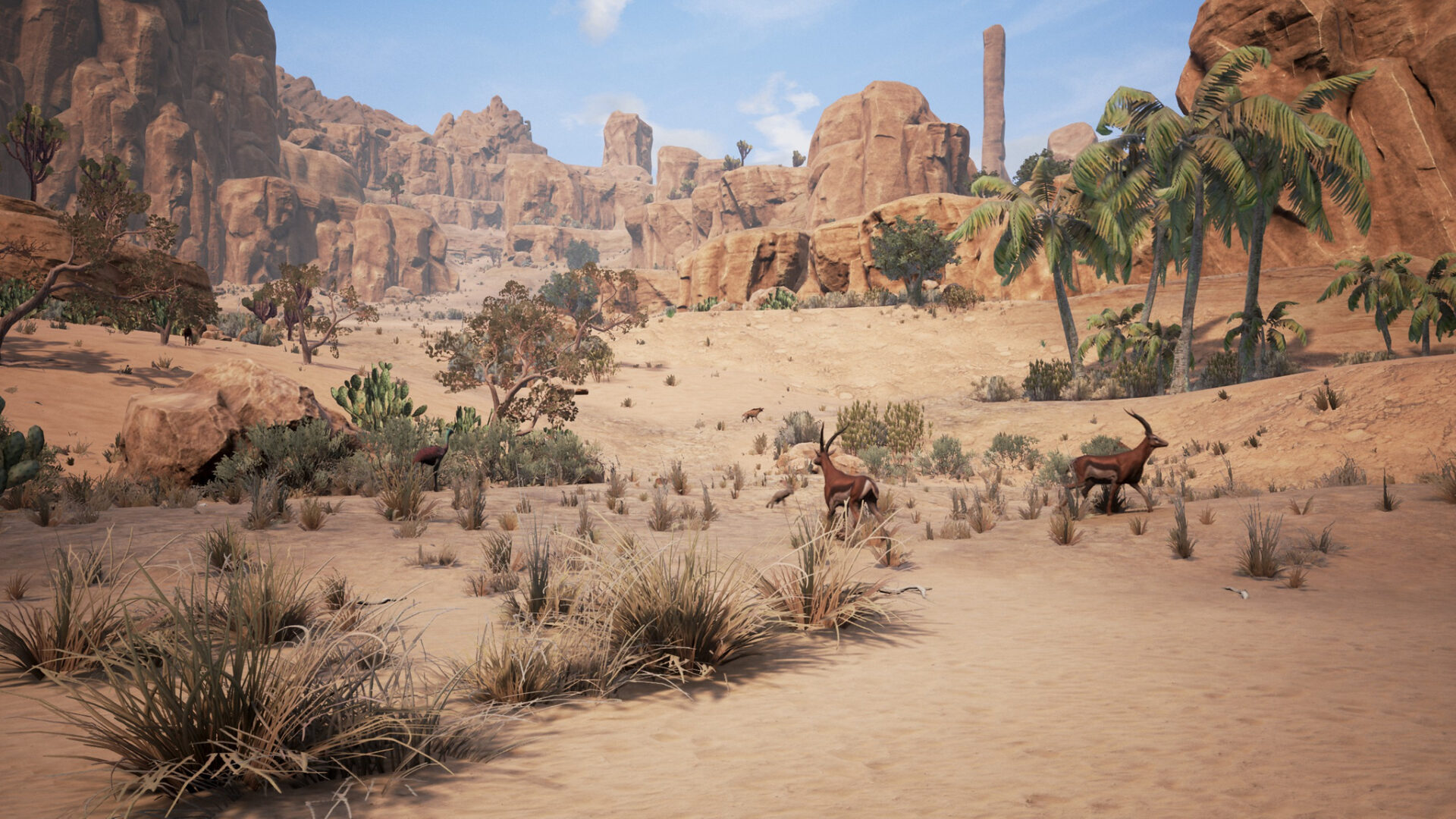 Religion and urban centers are subjects both the game and myself have yet to scratch far from the surface but I am convinced of Conan Exiles’ huge potential, as long as the developer keeps receiving support from gamers and buyers of his project. Slightly ironic, since I think the game is a bit on the overpriced side but at the same time I am fully aware that, without future customers, the outcome for Conan Exiles shall be quite typical. Funcom, please provide your new project with Trading Cards and as many Achievements as you can. Gamers have come to rightfully expect that from a title of excellent production value. Steam’s a metaphoric graveyard for some developers’ dreams and you can find so many de facto abandoned Early Access games that they’re beyond count. Don’t allow the one promising game featuring iconic barbarians to go silently into the night. A warrior’s end is faced standing with sword-in-hand! 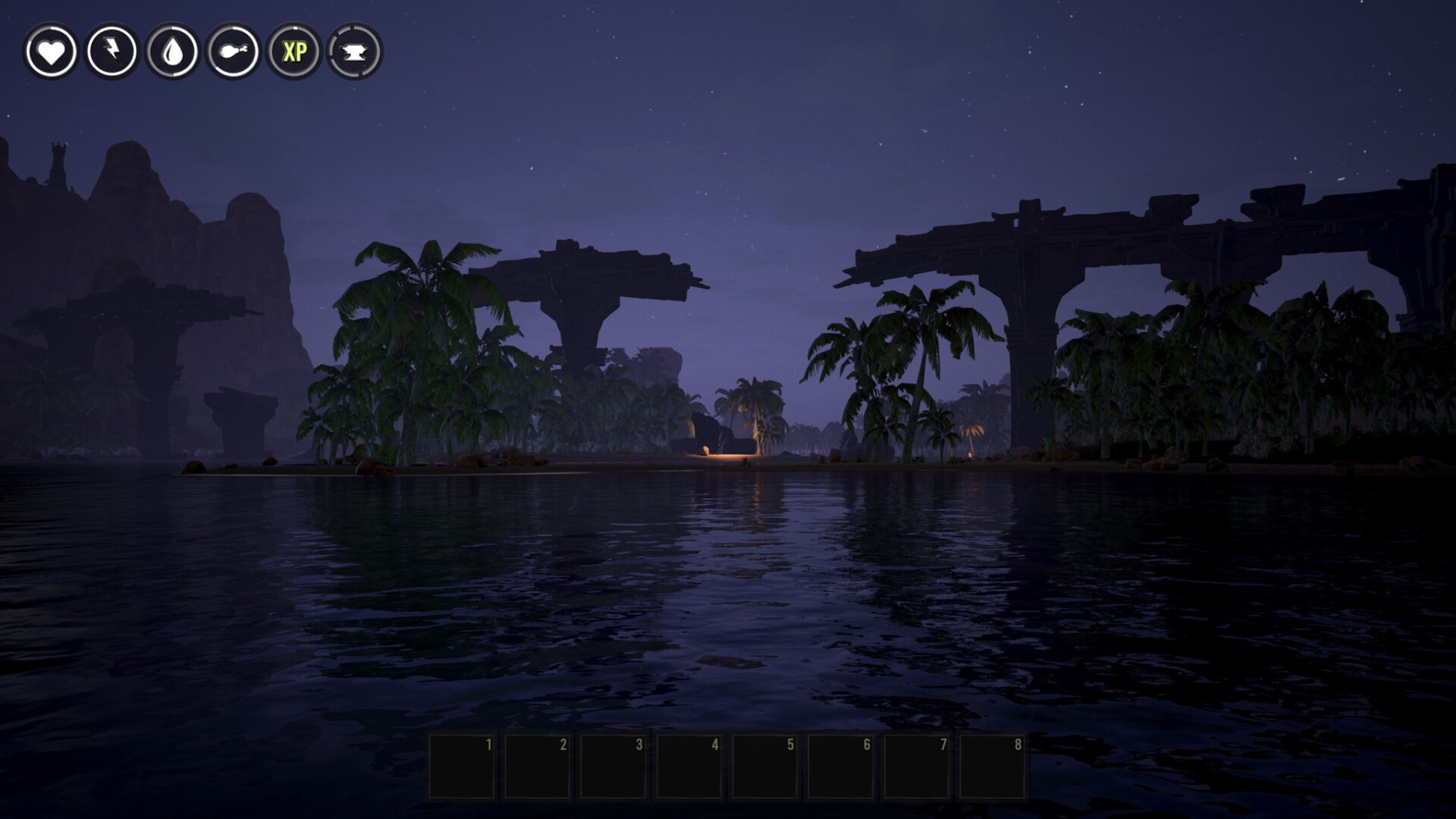 Weak Points
– No tutorial and so far only feeble attempts at a storyline.
– Slightly overpriced since it’s still an Early Access.
– Inexplicable frame rate drops.
– No Steam Trading Cards nor Achievements.