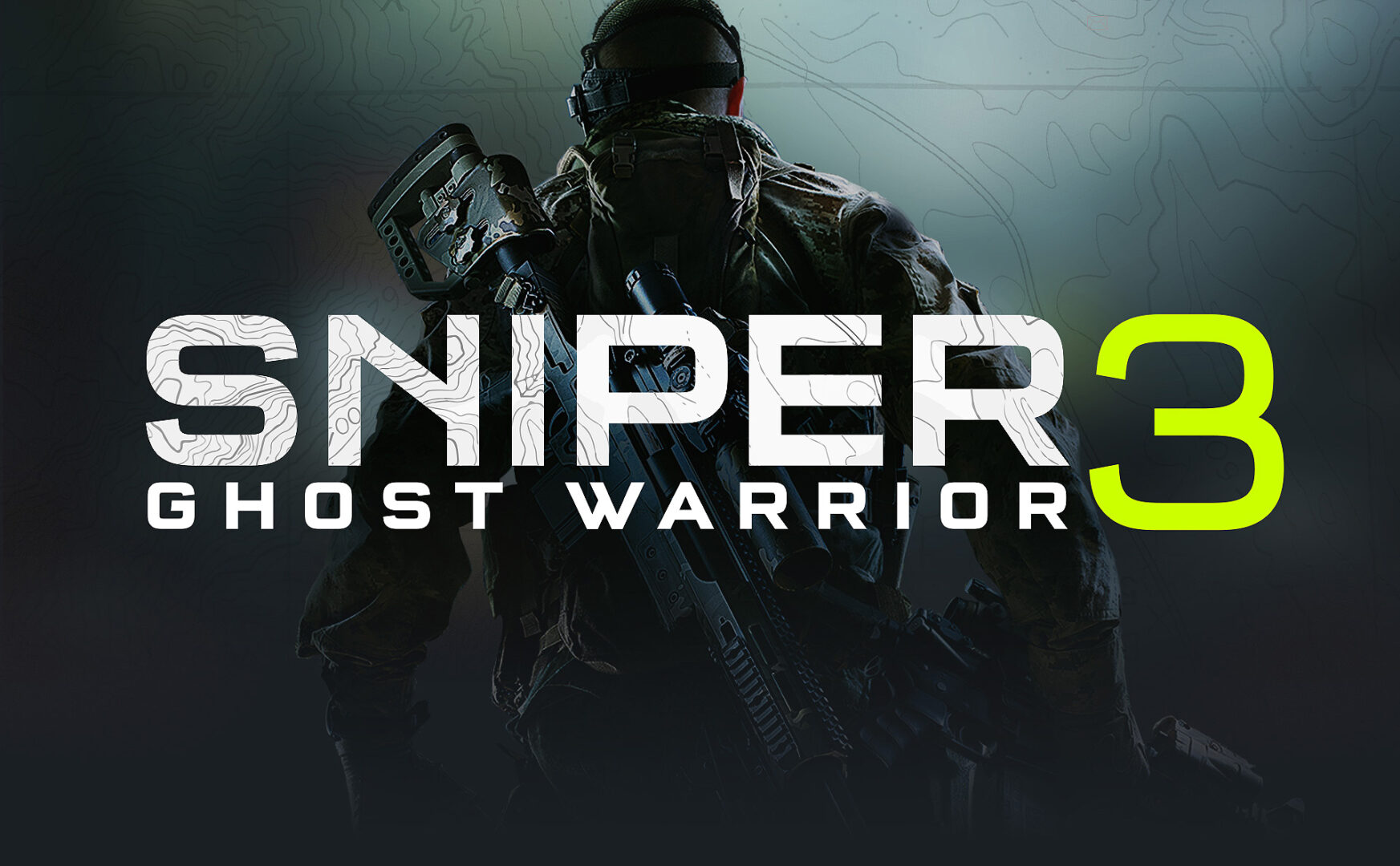 A worthy sequel to one of the best 3D FPS franchises focusing on snipers. A stable Open Beta that shows great promise once the performance issues get sorted out.

General Impression
Beyond the shadow of a doubt, the role of the sniper has been influential within the small unit tactics and indeed it has shaped the face of modern warfare, whether we refer to urban landscapes or open fields. The portrayal of snipers in films and particularly in video games, has increased and improved drastically over the last several years. Subsequently, the level of polish and freedom of movement, made possible by newer and more powerful game engines have also influenced the popularity of what were once regarded as dishonorable marksmen which never gave their opponents time to react and fight back. The sniper is as integral to the contemporary battlefields, as he (or she) was, since the dawn of firearms. Words can’t describe the monumental efforts which have to be undertaken by a truly skilled sharpshooter, who’s a potential and quite literal one-man-army if need be. 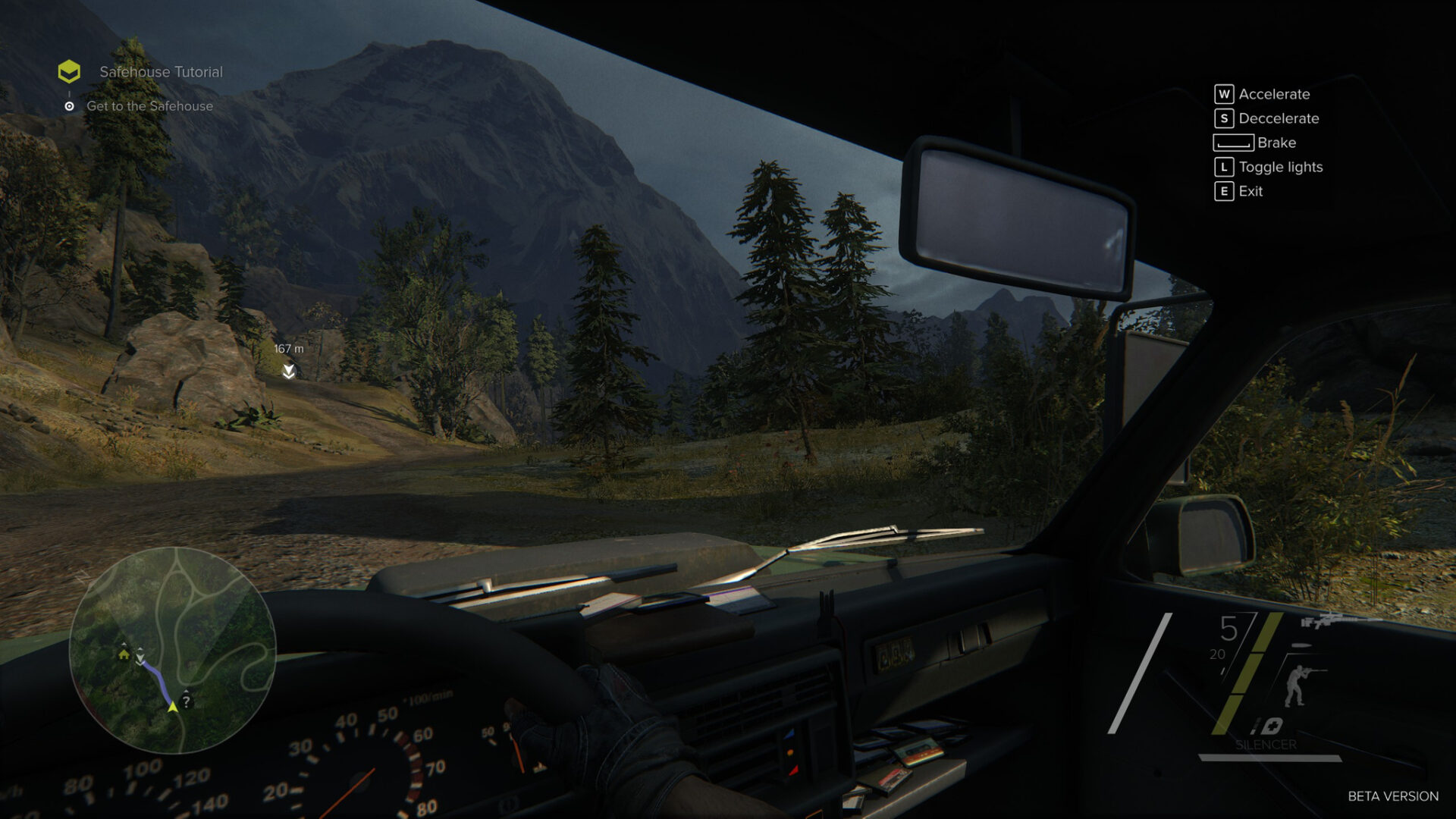 I’ve been a fan of first person shooters involving snipers for over a decade, along the release of Sniper Elite in 2005. It goes without saying that the Ghost Warrior series from which the beta game I’m prreviewing today is belonging, has been both a staple of the sniping subgenre as well as an integral part of my game collection. I won’t be biased though, since I admit that the franchise has had a rocky start, with shoddy AI and recycled assets to the point at which all the levels on most maps, looked the same. The past has been laid to rest as Ghost Warrior 2 and now 3, show great promise and offer the right amount of diversity for all types of shooter game fans. The real job of a sniper is obviously not nearly as exciting or easy as the missions portrayed in video games, but I’m certain you were already aware of that. 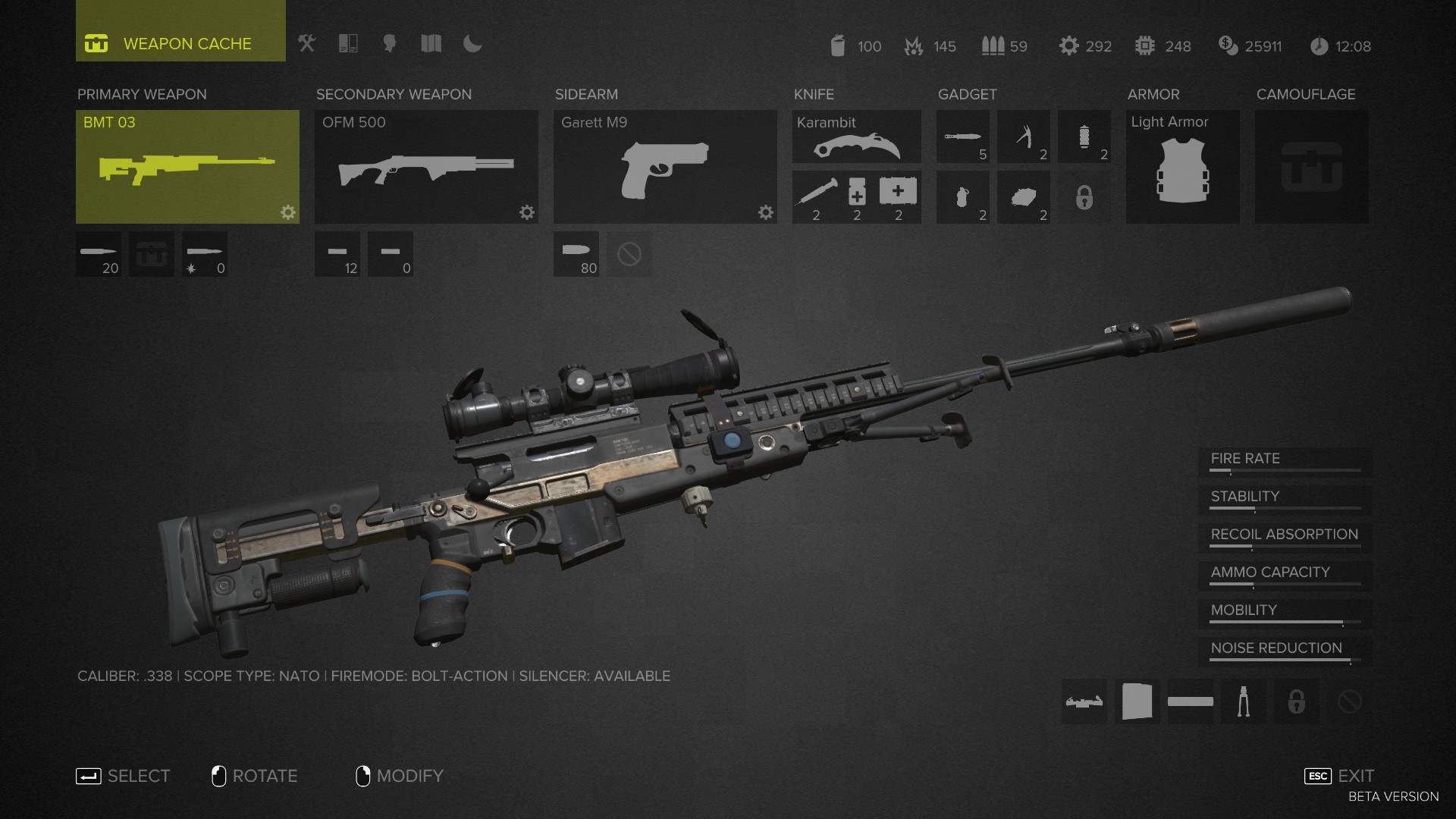 For the sake of realism or lack thereof, I’m still glad they didn’t simulate the real deal about snipers. You see, it’s never just one fellow staring through a scope and silently picking off targets by himself. Most armies and other branches of the armed forces, employ a team of usually two or three highly skilled marksmen. One may act as a Shooter, but the role played by the Spotter(s) is as vital as the coordination between them, in real time. In Ghost Warrior 3 as in many other FPS’ focusing on snipers, you get your intel directly through com link with the HQ as in our case, the Joint Special Operations Command (JSOC). 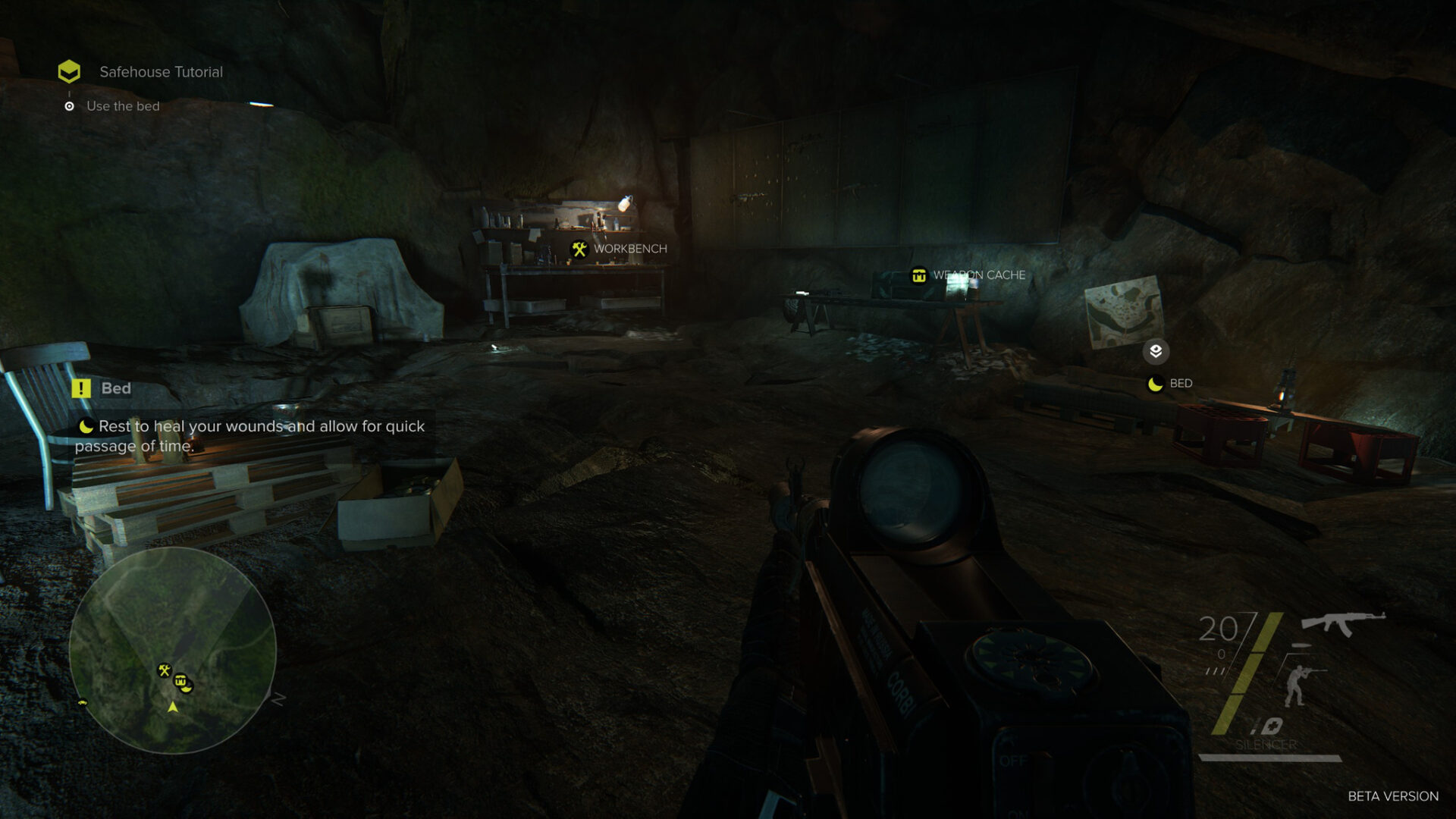 This being the Open Beta stage, you can only control one operator out of a team of several. Jon’s two missions both relate to a fictional separatist country but the approach method in each assignments’s case is completely up to the player to decide. You can be fully silent and stealthy, shooting your targets from a safe distance with your obvious weapon of choice, a sniper rifle. Or go in guns blazing, with the help of fully customizable assault rifles or shotgun. You can even attempt a hybrid approach that involves silenced pistols and throwing knives but still get dangerously close to your enemies. It is important to understand that even with the purchase of the light body armor present in this beta, you’re a marksman, not an assault-specialized soldier. You will die quite quickly should you find yourself in direct line of fire. 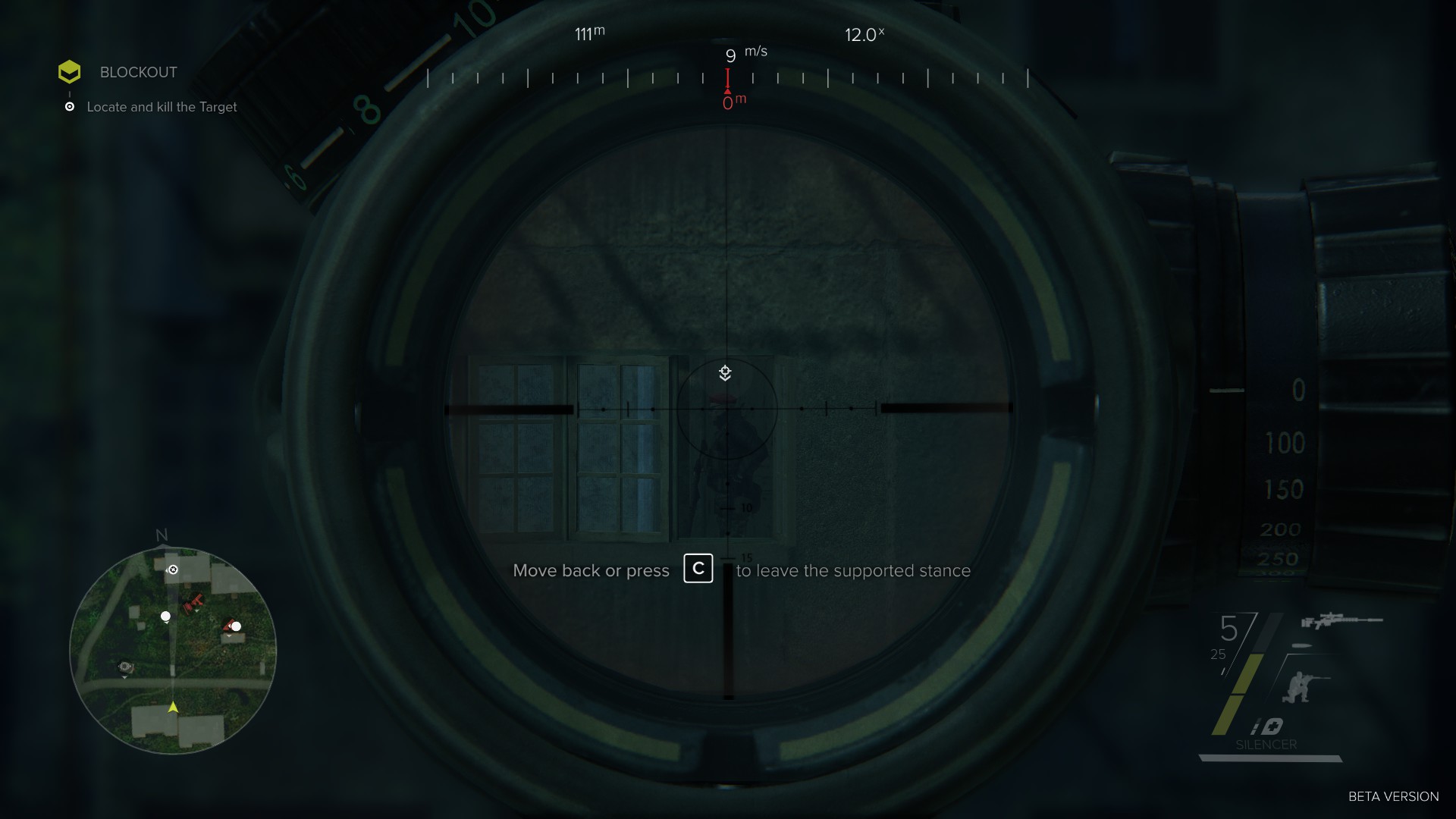 I really liked the fact that GW3’s health system isn’t regenerable as in nearly all the FPS games from recent years. You have in fact, a few options, from the temporary bandages to more efficient health kits. Just keep in mind that you are as vulnerable to bullets and falls in as equal measure as you are deadly while sniping from afar. My advice in this case is quite simple. Play the game as it is intended. Smart and silent. Patient and observant. Storming the front gate is just going to force you to inevitably restart from the nearest checkpoint. Speaking of which, I do hope the developer shall include a manual save option since the checkpoints seem to respawn even the enemies which you have already terminated. Quite frustrating to see your progress being neglected through a base you have already cleared by half of its guards, only to have them reappear in a subsequent checkpoint loading. This glitch needs to be straightened out ASAP. 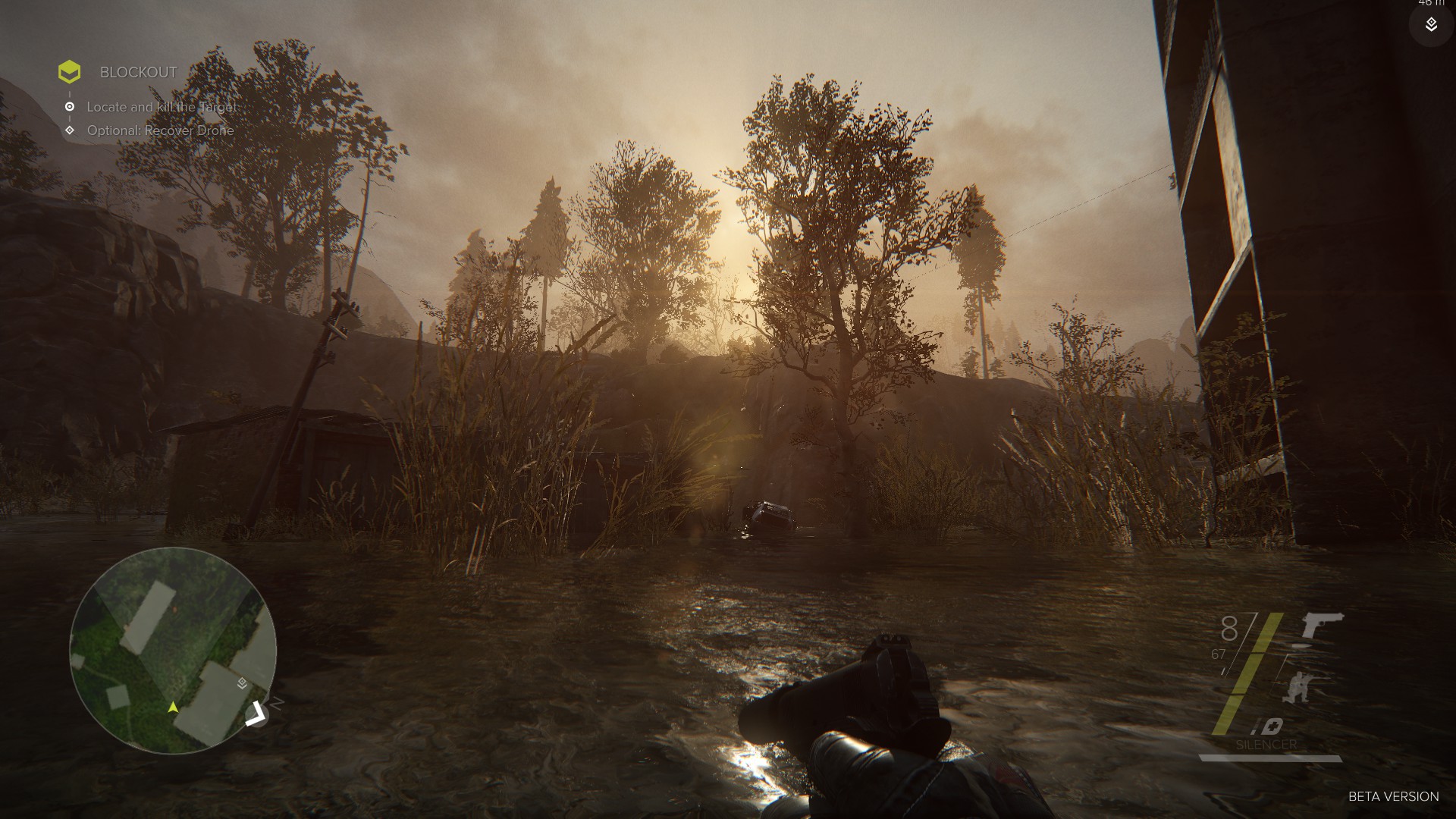 Luckly, no crashes to desktop in my playthrough and apart from respawning foes, I only met just another bug: the difficulty in swapping weapons at your cave/safehouse. Even when selecting new weaponry, I would still have the same old ones I was trying to swap. It takes multiple attempts at changing them (and that is something you can’t do while a mission is in progress) before the modifications were taken into account. The craft system is great, as you not only rely on buying the equipment but also looting the fallen enemies and inventory caches present during missions, which were given an integral role. You adapt and overcome just like a true hunter. The inclusion of many type of grenades, mines or C4 explosives is only natural for a versatile warrior. Scout drones are also present though the battery life is rather short and they only allow you to safely recon an area before planning your next move. Devs should definitely allow players to weaponize their drones as the precedent has already been witnessed and enjoyed in Splinter Cell: Blacklist. 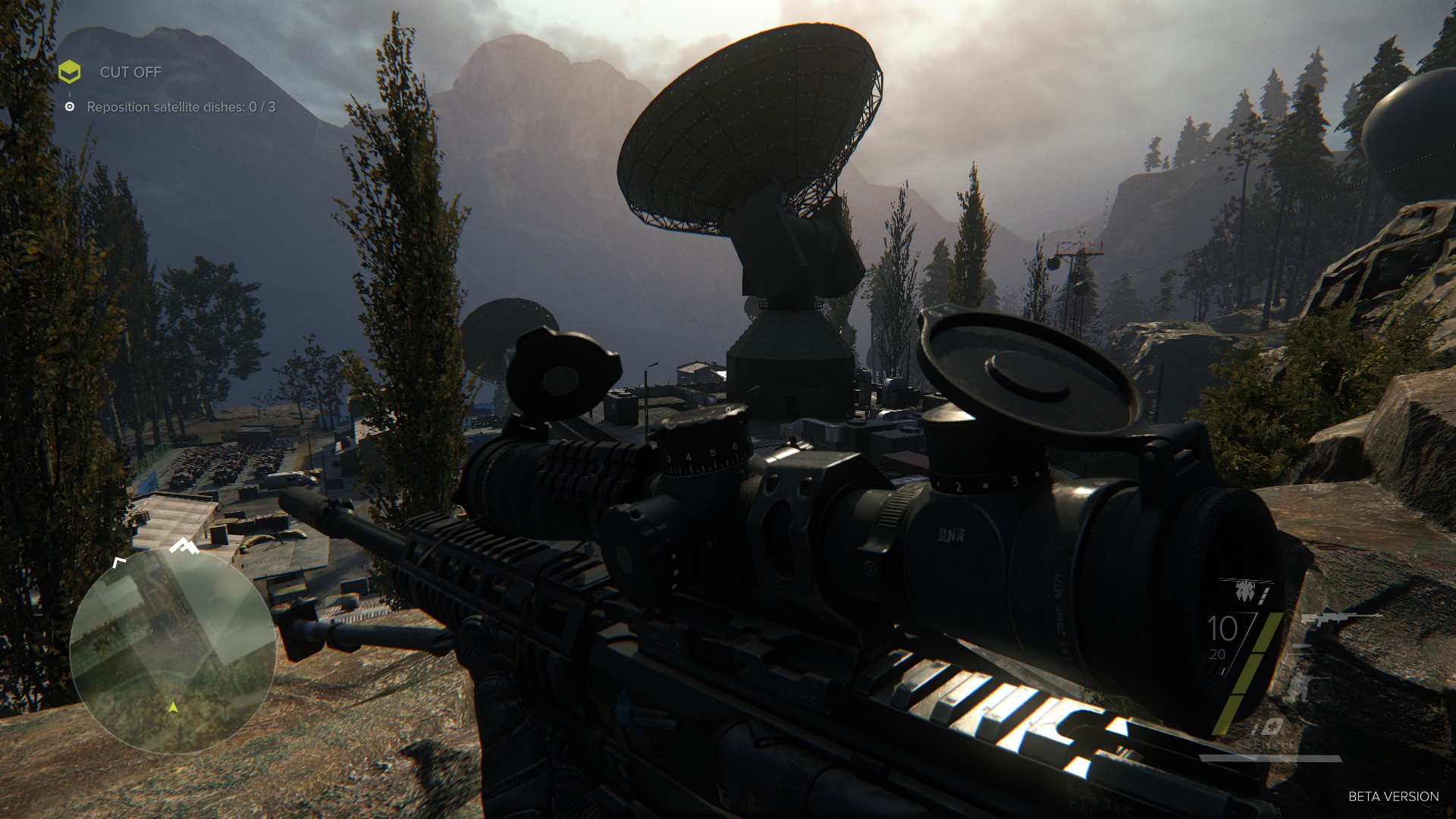 How could I complain about the graphical details? They are gorgeous and that is to be expected from a game that utilizes the CryEngine. Can’t tell if it’s the 4th or 5th rendition but as good as it looks, as hard it is to push a resolution of over 1080p while also sporting 60 frames per second and maxed out details. I own a custom built system since 2016 which uses a non-reference model GTX 1070 and an i7-6700K (both overclocked) but I still had difficulty when maxing out this game and having 60fps while playing at a resolution higher than 1920×1080. At 2K res, I had anywhere from 30 to 50 frames and I couldn’t stand the constant dips. Playing at 4K resolution I wouldn’t even hit 30fps so I resigned myself to play in 1080p and even then I couldn’t have stable 60 frames as zooming in or out had annoying fps drops. Might be just a matter of optimization once the retail game launches. I do hope that’s the case because performance-wise, I’m far from impressed by the Ghost Warrior 3 Open Beta’s frame rate. 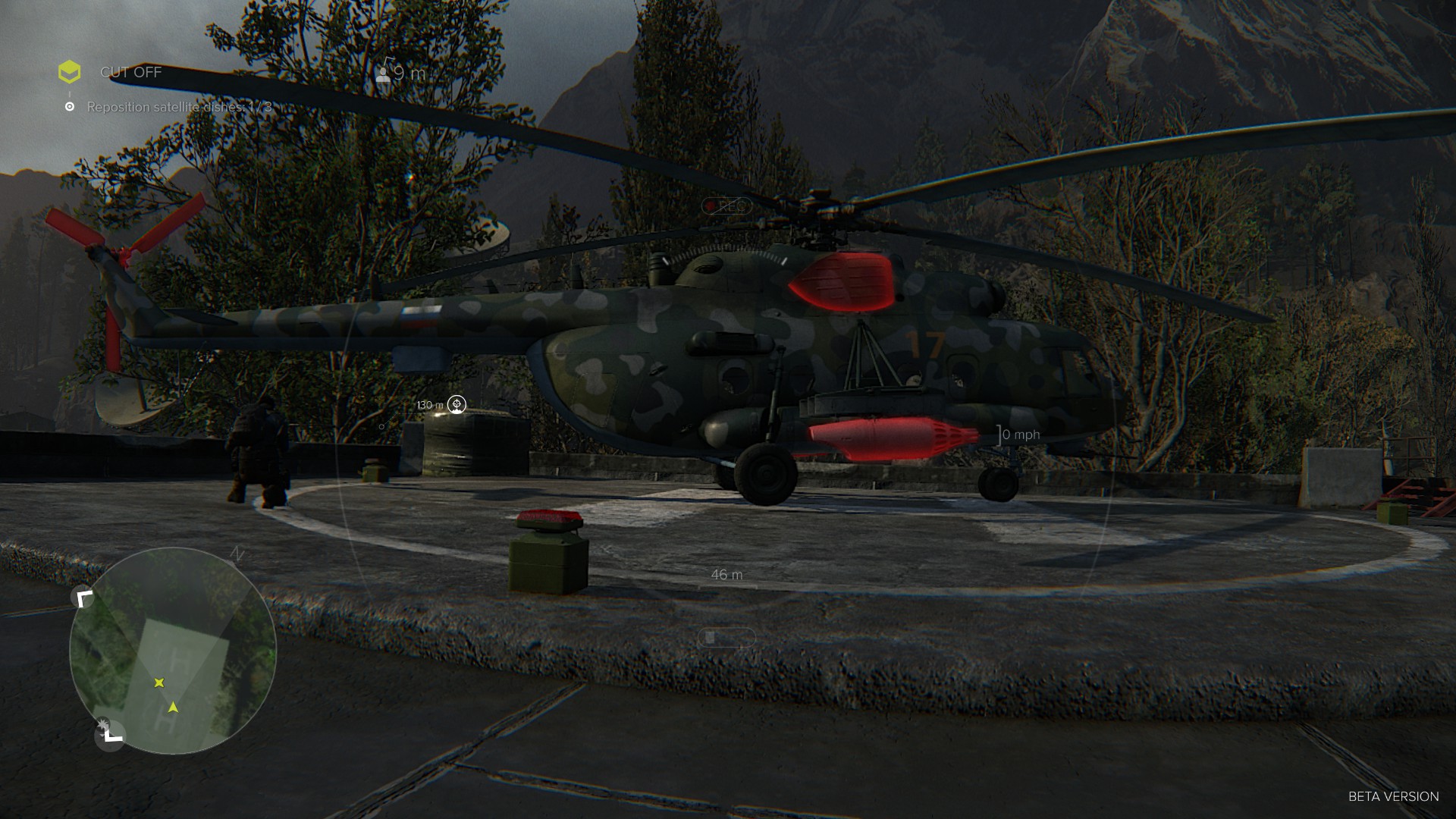 All things considered for an Open Beta, Sniper Ghost Warrior 3 is a step in the right direction for the series. I expect ever larger maps, mission and gear variety as well as a stable gameplay that runs just as good as the game looks in the screenshots. CI Games made the right call by allowing players to experience even a small taste of things to come after two more months of development. Poised to release in April for both PC and consoles, you don’t need me to remind you which platform is best since that is entirely your choice. Ghost Warrior 3 already offers so many decisions in-game that the most important one outside of it, whether to buy the game or not, shouldn’t be too hard. One bullet, one kill, only one right decision in this case. 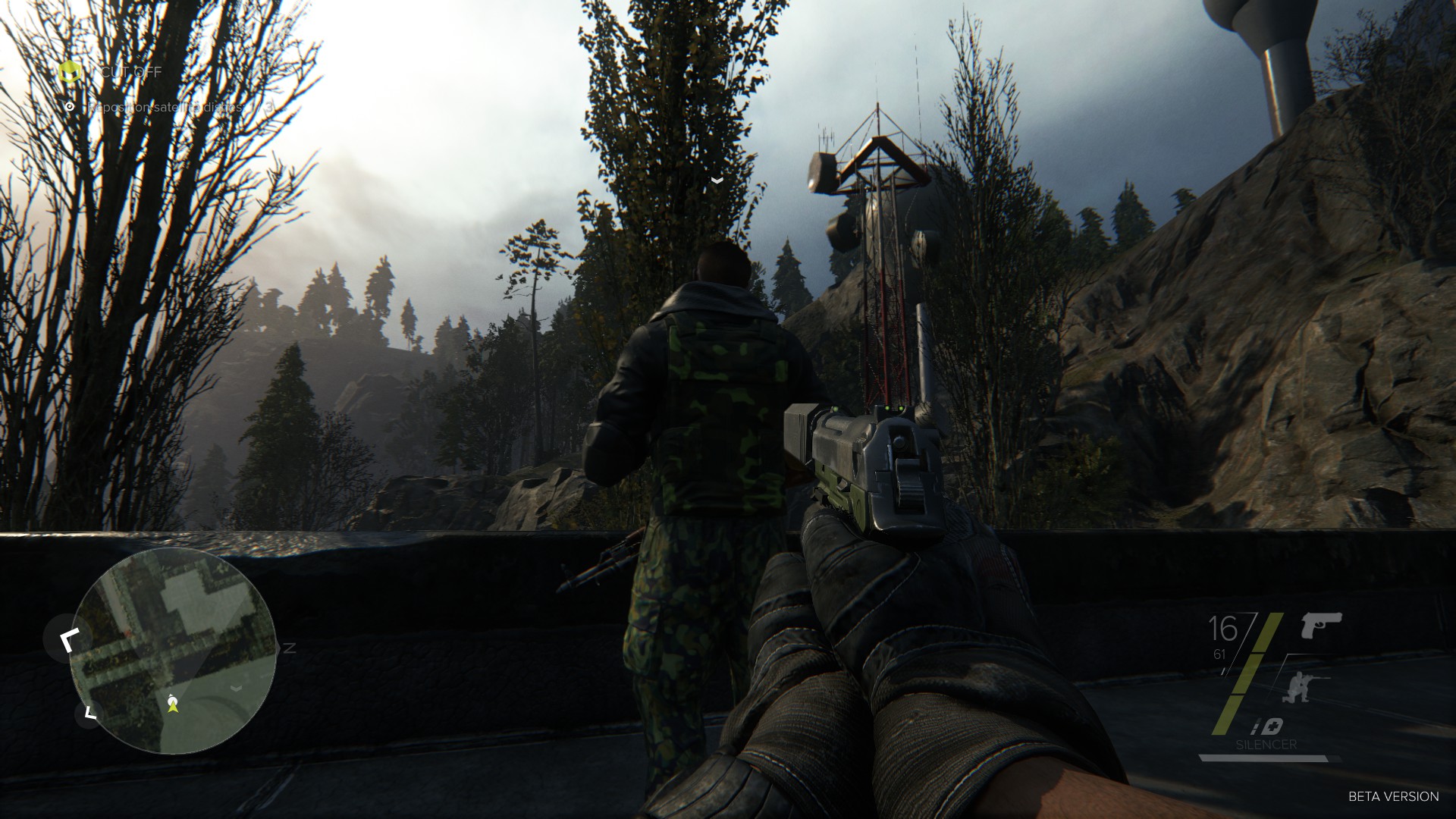 Strong Points
+ Only a few bugs or glitches for a Beta stage.
+ Gorgeous graphics and sounds.
+ Freedom of choice and approach for the included missions.
+ Crafting and looting mechanics.

Weak Points
– Predictable AI.
– The game’s not properly optimized thus being far too taxing even for high-end system specs.
– Lack of a manual save file option.