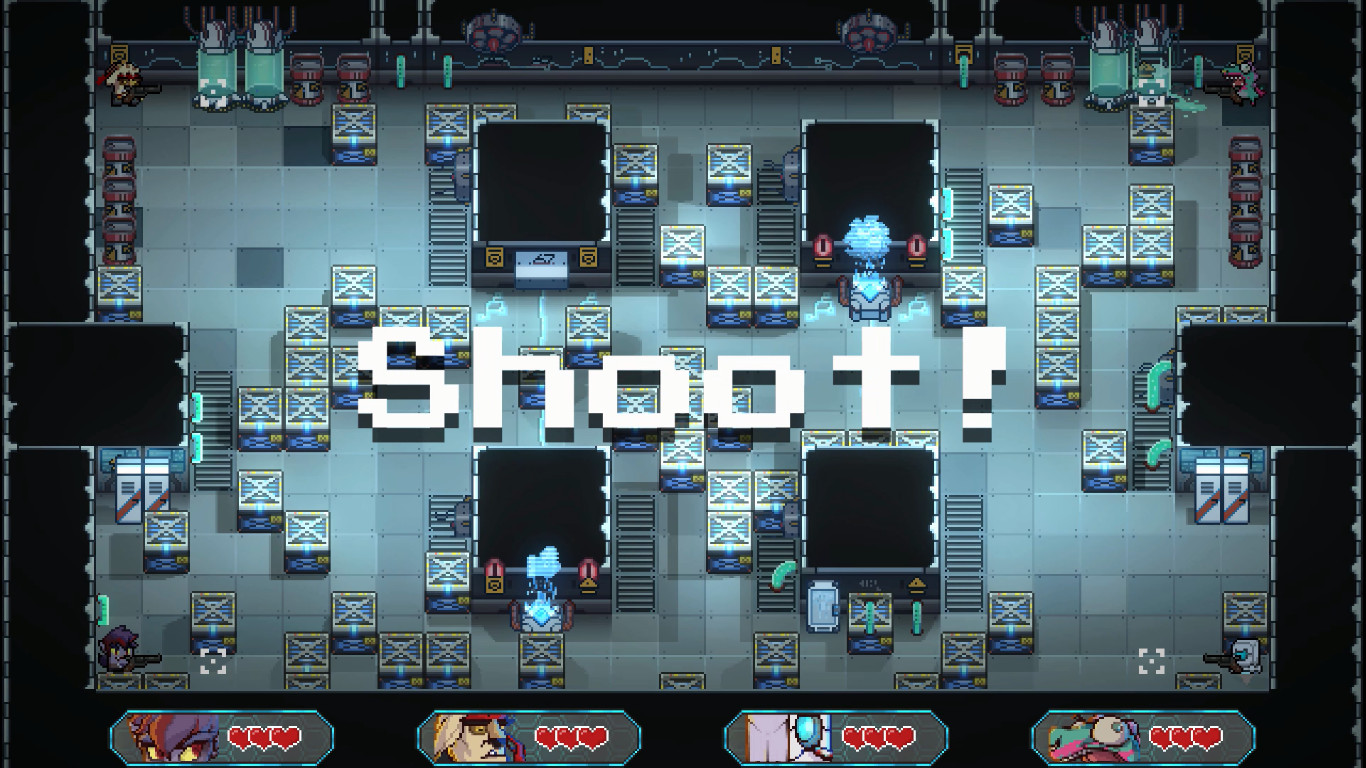 by Genkipro3 February 20178 min readAdd comment
Guns N’ Boxes (I wonder what happened to the first apostrophe) is a four-player top-down twin-stick arena shooter with pixel graphics, currently in Steam Early Access.There’s no story to Guns N’ Boxes, but there doesn’t need to be. You pick your character from a list of five, pick your arena from the two that are currently available, and proceed to smash boxes, pick up weapons, and try to kill your opponents before they kill you. 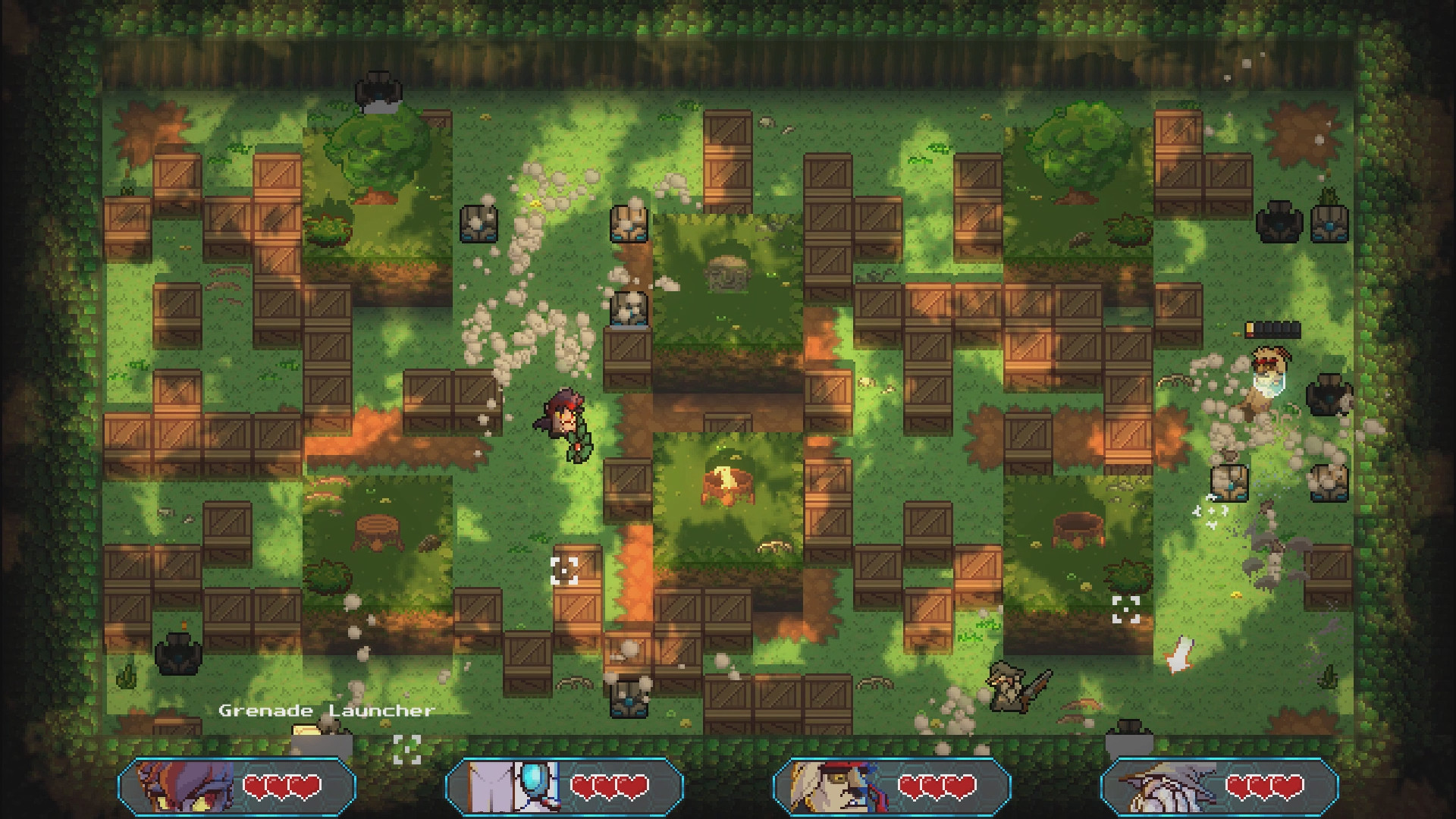 Character portraits are cartoon-like and well done. In-game graphics have a retro pixel look to them and are well done, but I found the arenas to be too busy to work out what was going on at first, with especially the forest arena not always making it obvious which walls are solid and which are just part of the background.Weapon graphics are good and everything moves smoothly. Animations are pretty good, too, but you’ll have a hard time finding enough down time to actually look at them, as the gameplay is pretty fast. 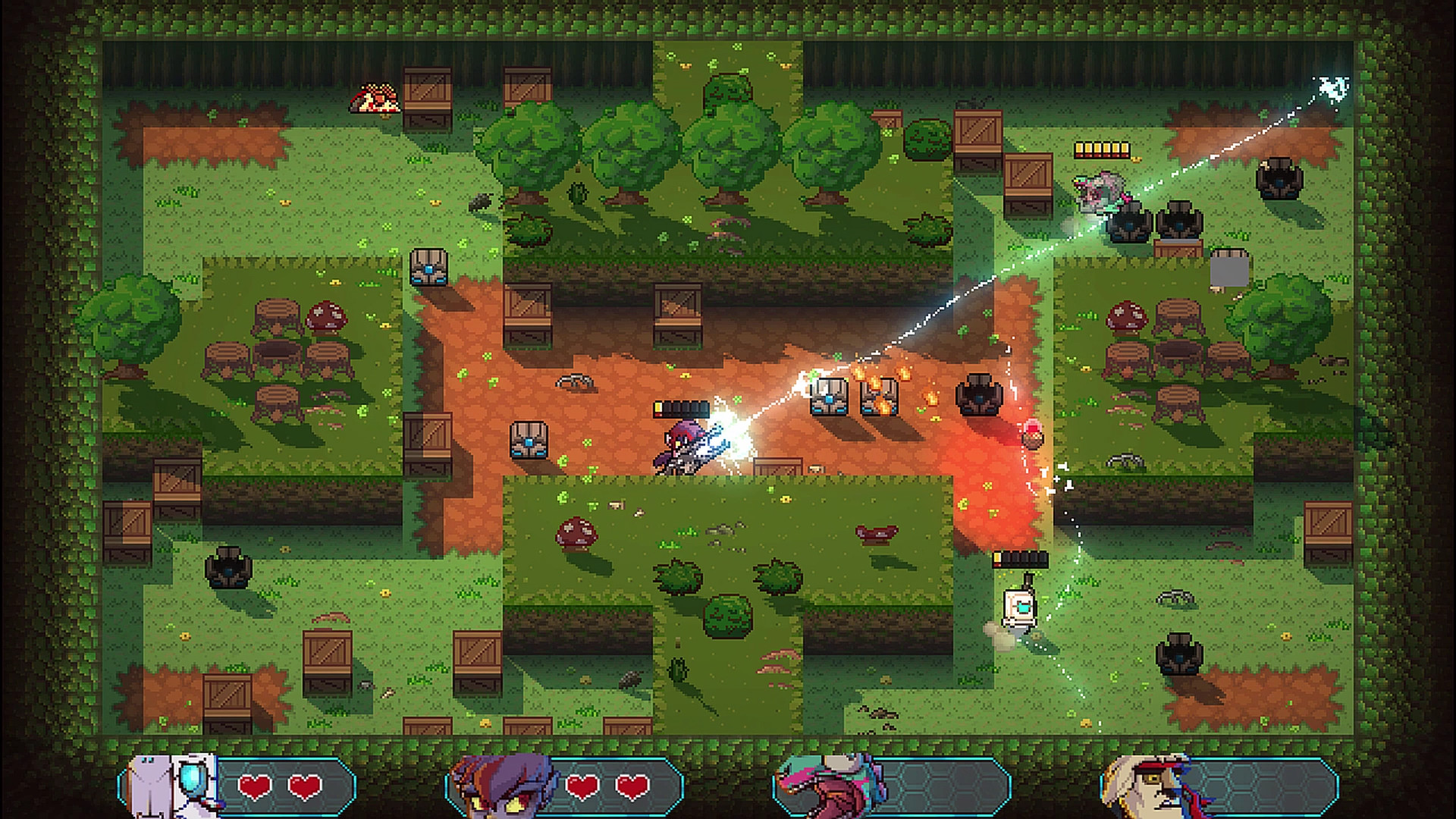 There’s a hand full of graphics options, but they seem a bit bugged. On a gaming laptop with a 1070 they defaulted to ‘low’. I quickly changed that, but no matter what I did I couldn’t get vsync to stick on; every time I restarted the game it had reverted to the default ‘off’ setting again.

The mouse pointer / target reticule also needs to be hidden in the main menu UI when playing with a controller; it’s only needed for mouse UI navigation.

Sound
Music is acceptable, but it gets a bit repetitive after a while. The game could do with a few more tracks, perhaps randomly selected for each level. Sound effects are good, but the default sound volume is too low compared to the music. You can adjust it, though. 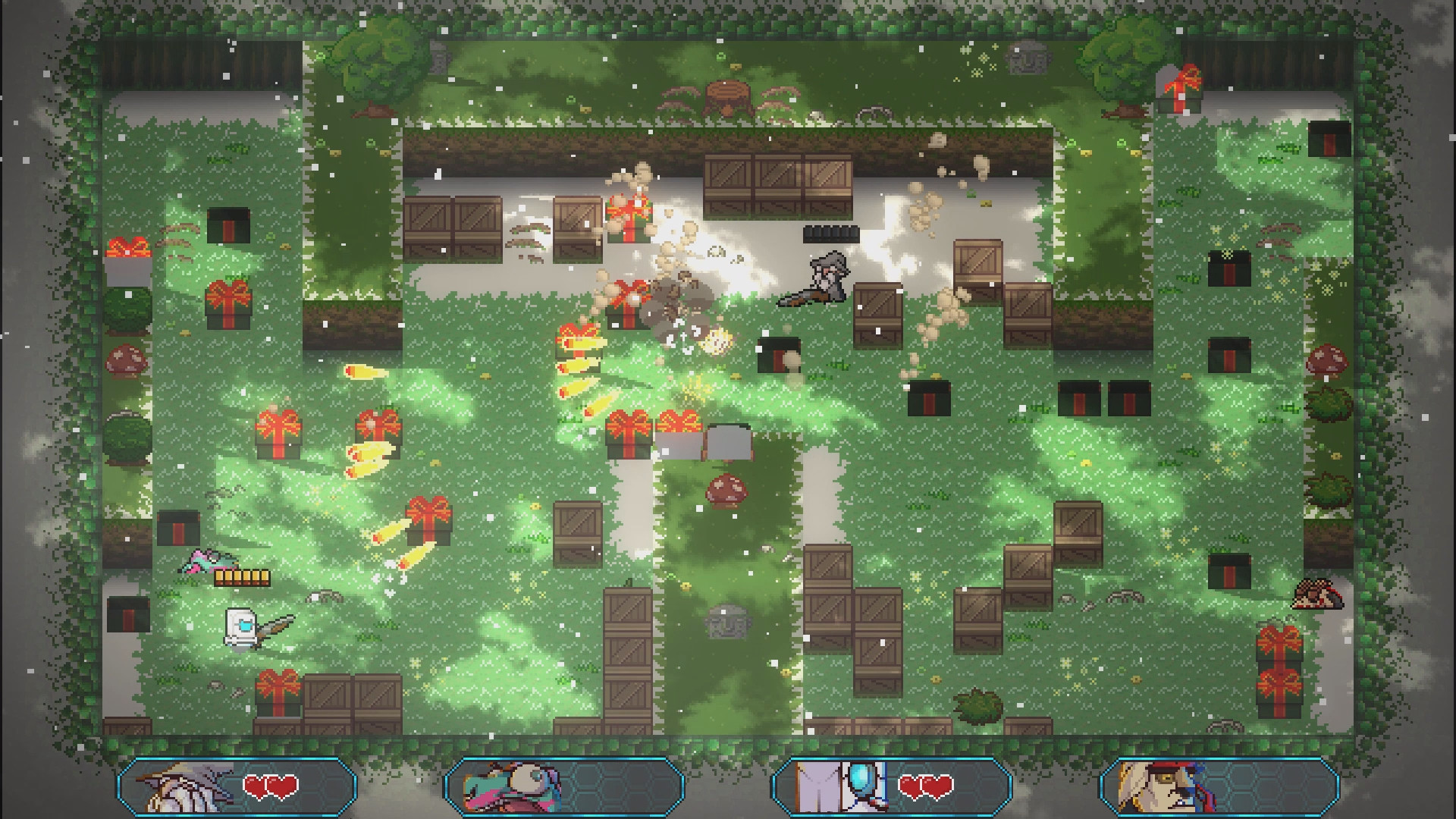 Gameplay
Guns N’ Boxes is played in a series of short rounds where only one character is left standing. Each round has from two to four characters, with between one and four of these being controlled by real people, either local or online. Each player controls a character using typical twin-stick controls and a controller is definitely recommended: left stick to move, right stick to aim, and triggers to melee or shoot. There is no tutorial and no instructions, and no way to reassign buttons or check the current assignments. But you should be able to pick it up and play fairly quickly regardless.

There are two game modes: elimination and death match, but in two-player arenas they amount to the same thing. Death match sees the first character to reach the target number of kills named the winner, while elimination awards the title to the character that lasts the longest a specific number of times. 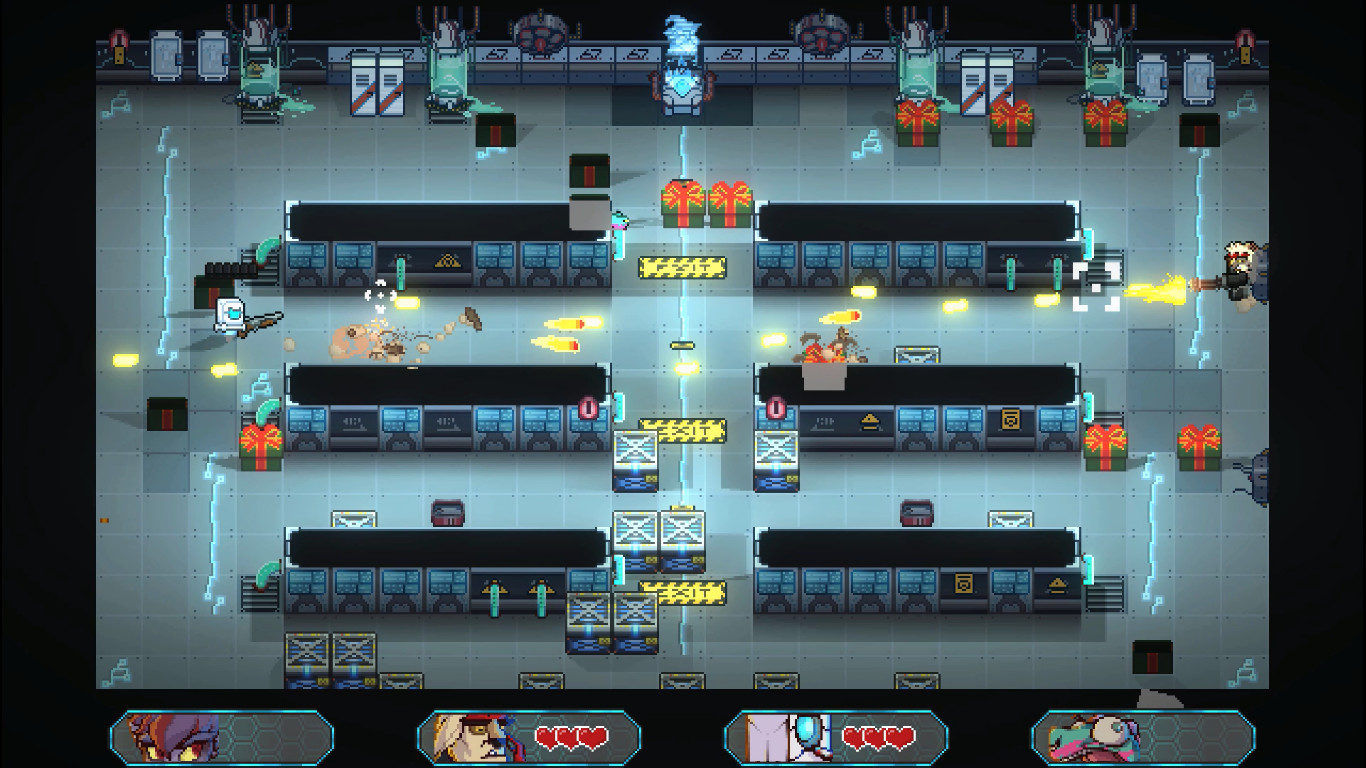 Regardless of the game mode, you choose your character from the list of five, then choose your arena from the two themes available, and you’re then spawned in one of the arena’s corners with your opponents in the others. Each arena is procedurally populated with boxes, each of which may contain a randomly assigned weapon pick up. Any character running over the icon picks up the weapon, but you can’t tell what it’s going to be before you pick it up and unfortunately, once you get a good weapon, you can’t lock it in to avoid picking up others either.

With the sheer number of boxes and weapons in some rounds, there’s a massive luck factor to the game. Some may argue that good players can win with any weapon, but I think everyone would agree that some weapons are simply better than others so, if you’re lucky, you’ll get a good one and not have to walk through a path of bad ones to get near your opponent. 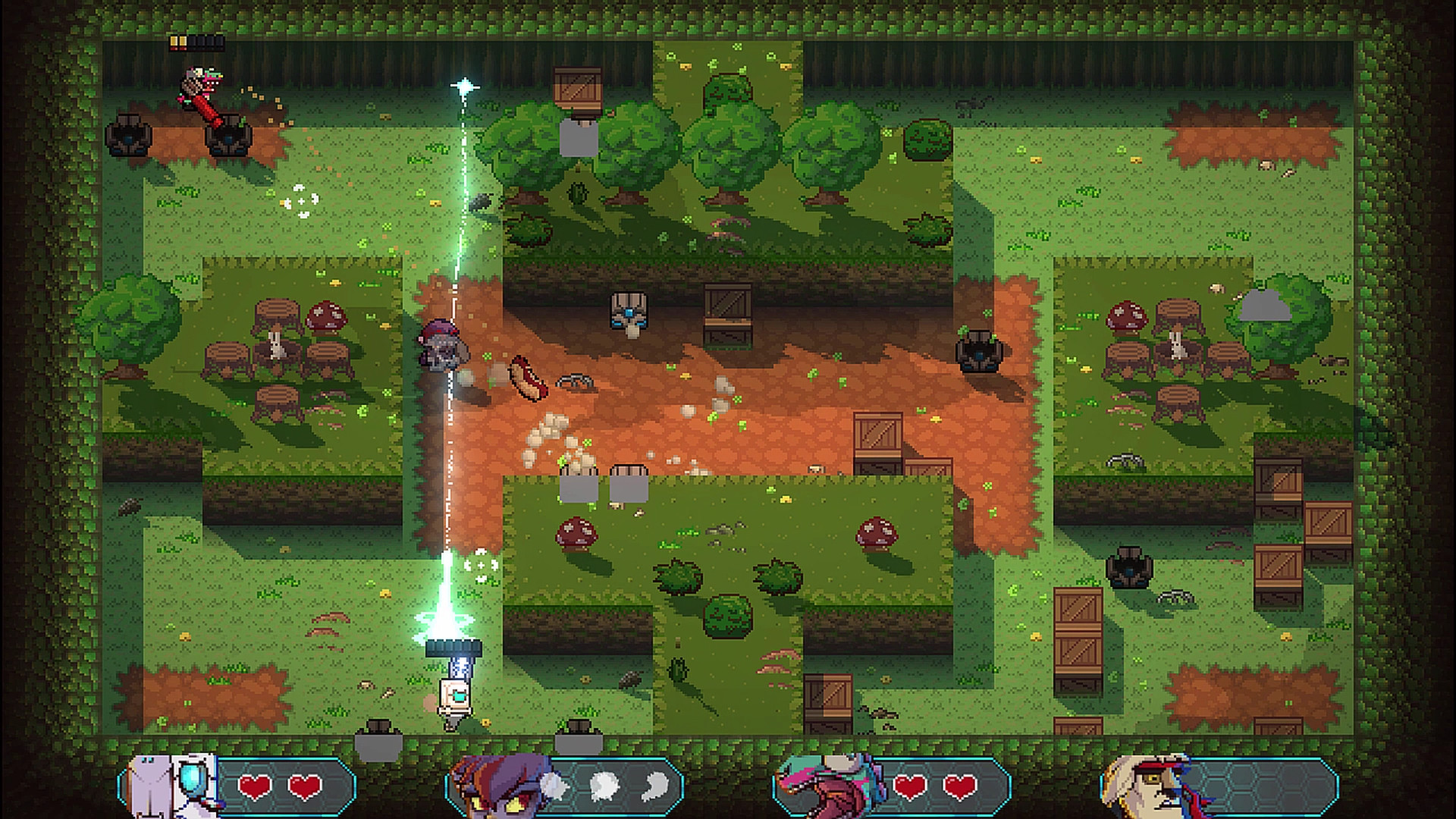 There’s a large range of weapons, which is great, but I think the developers were running out of ideas, as many of them are just silly and don’t make much sense. Unfortunately even with the weapon variation, you’re likely to have seen them all within a couple of games, and if you’re anything like me you’ll be ignoring most of them in search of the two or three that you like the best anyway.

As mentioned above, there are only two arena types — forest and laboratory — and it’s not really enough. Similarly with the characters; there are only five to choose from, and although they’re well drawn, the differences are mainly cosmetic. The starting weapon may be slightly different for each character, too, but if so it’s only a minor difference, given the number of weapon pickups on each level. 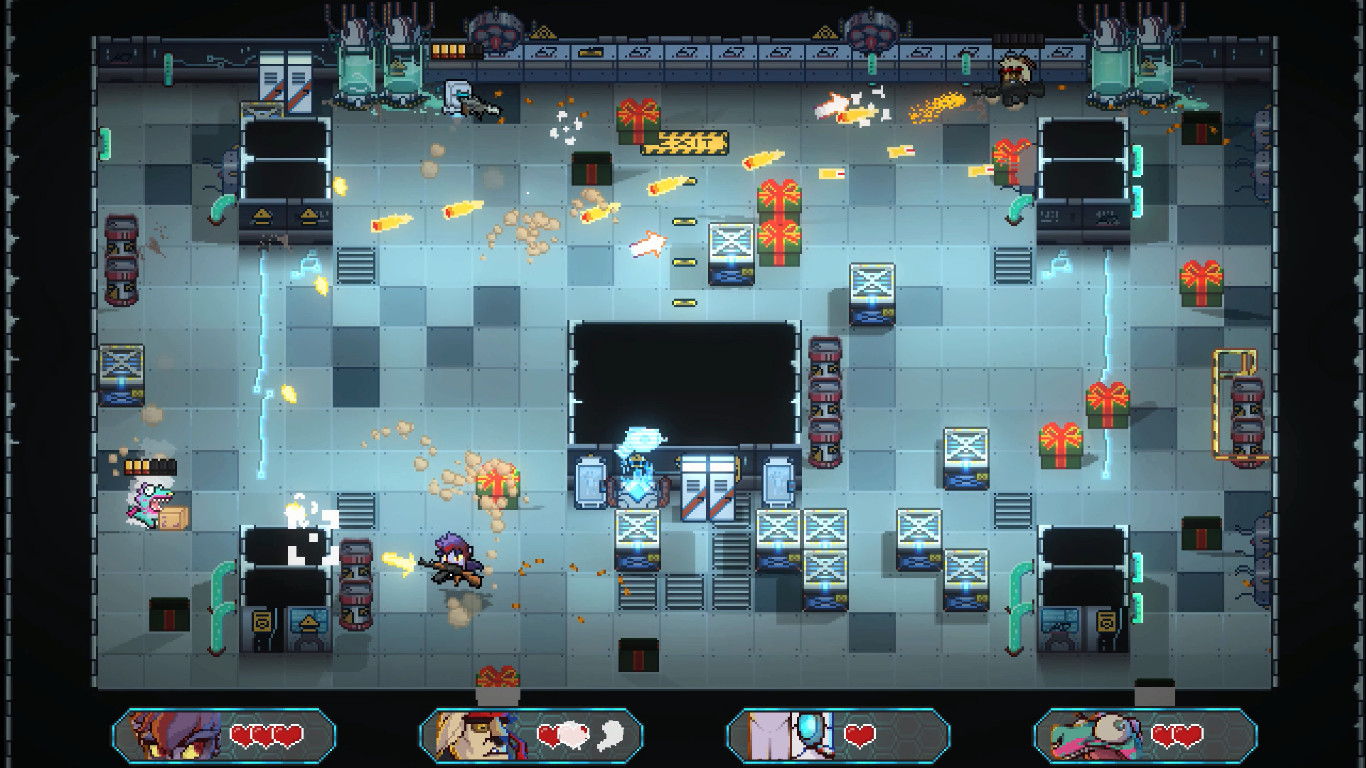 The game is obviously designed to be most fun with friends, and it supports local and online multiplayer matches. Both LAN and Online say “work in progress” at the moment. I was unable to find anyone to play with online and no one joined my created games, so I’m not sure if that’s because no one is playing or that the “work in progress” doesn’t work yet. Hopefully the situation will improve before release. In any case, you can play with up to three bots to hone your skills, or just have fun, so there’s still some enjoyment to be had if you can’t find anyone to play with. Strangely, there doesn’t seem to be any way to add bots to online games, though.

Guns N’ Boxes is ripe for weapon-related Steam achievements (e.g. “Kill x enemies with y weapon.”), but it doesn’t (yet) include them. I hope they’re on the developers’ todo list. 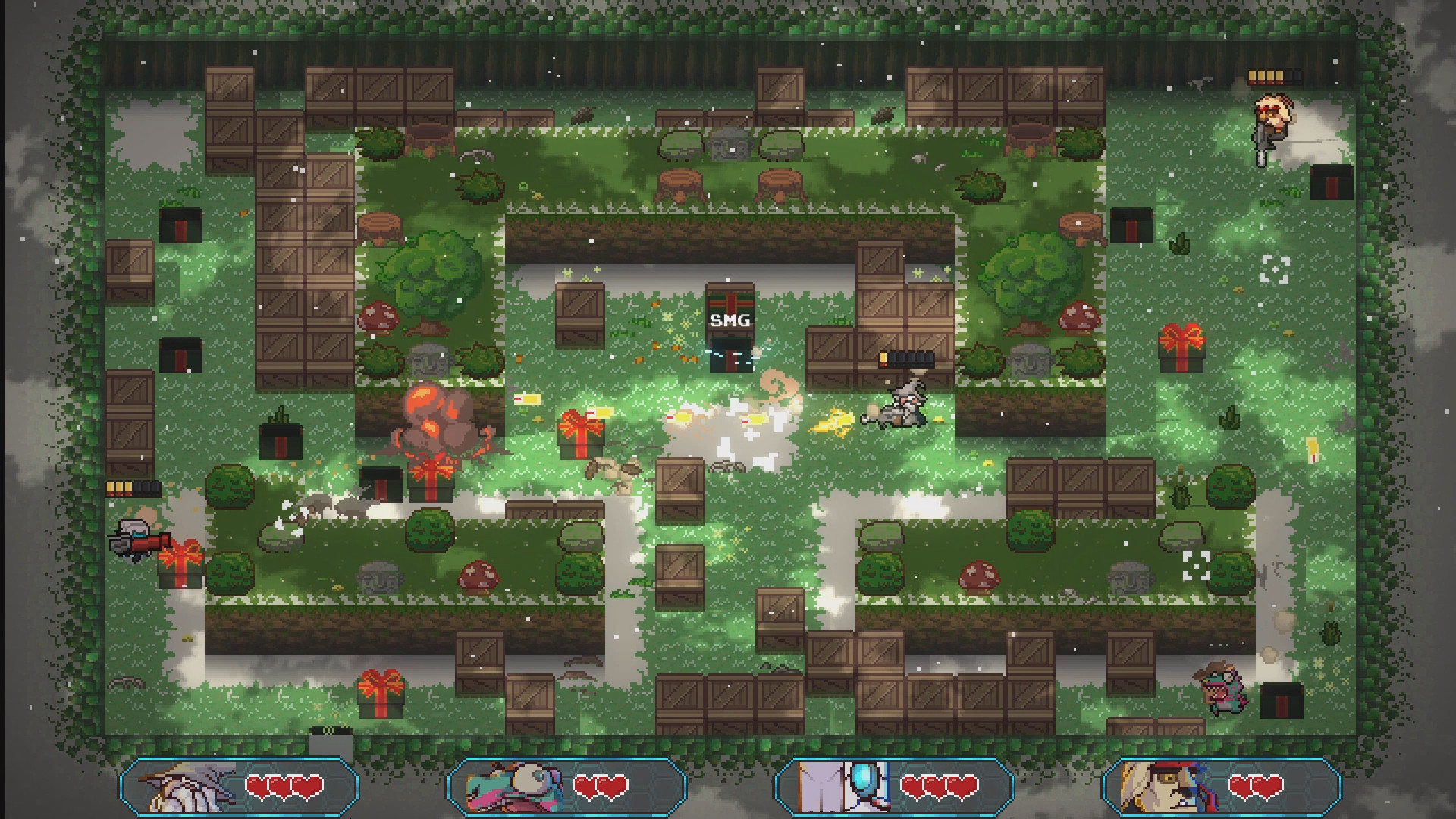 Finally, being in Early Access, you have to expect some bugs, and Guns N’ Boxes does have a few. To begin with, vsync won’t stay on; it keeps resetting when I restart the game. Other more serious issues include the game freezing completely when trying to exit from the online game menu (controller ‘B’ button from online game menu after choosing character, on the “waiting for characters” screen), and the game incorrectly awarding a kill to an opponent (I killed a bot who had a grenade launcher, which shot just before the bot died; the game froze me in place like it usually does just after you win a round, but the grenade landed at my feet and blew up, killing me and awarding the bot the point). Displays of points at the end of each round don’t always line up when you kill yourself either (you’re supposed to win a point for killing your enemy and lose a point for killing yourself, but often the game displays only the won point, then takes it away next round). 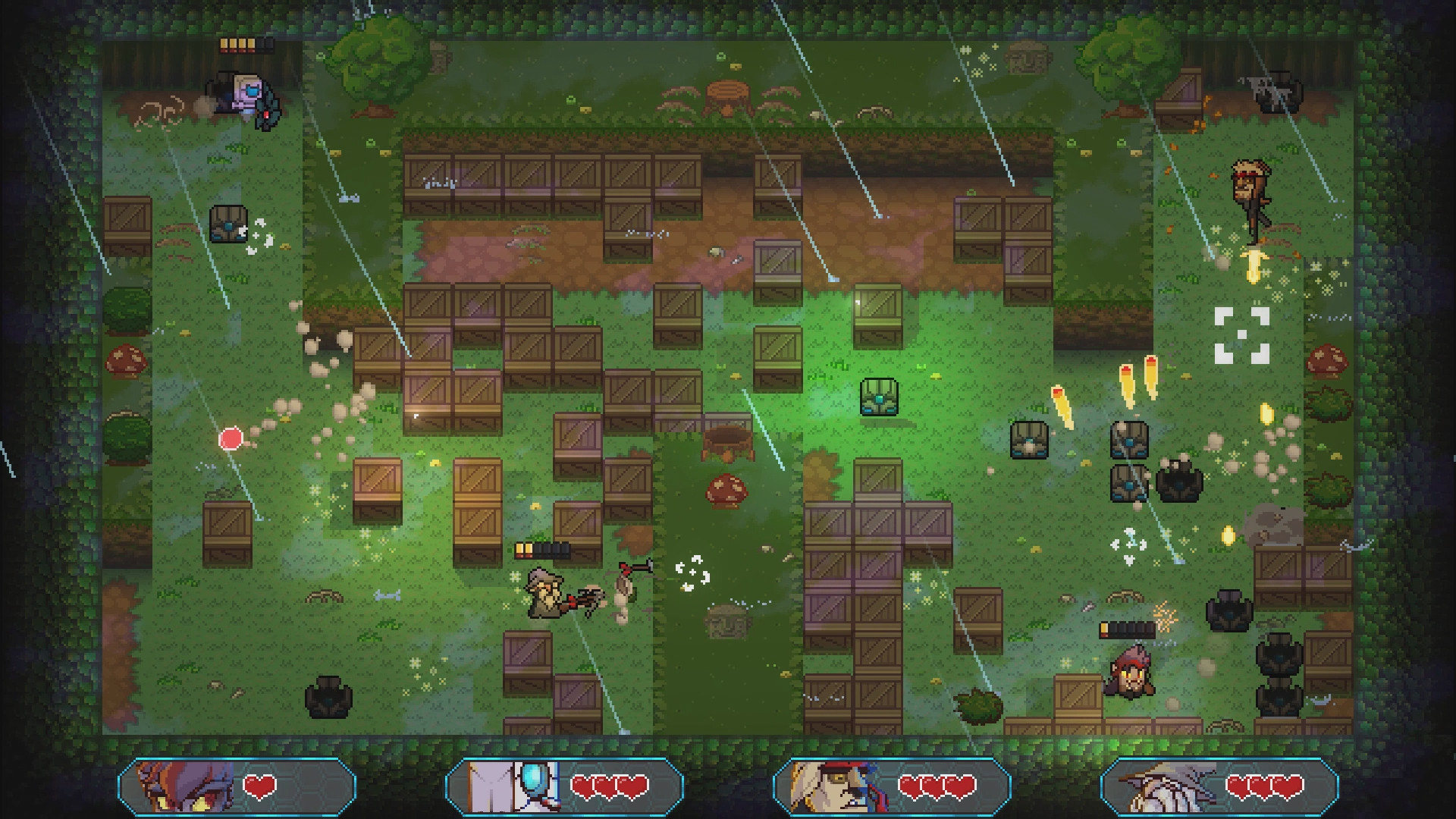 Cons
– Only five characters and two arenas, and you’ll see all of the weapons in a few games, too
– Too many weapons on a level with no way of knowing what you’ll pick up, and no way to ‘lock in’ current weapon
– Online multiplayer doesn’t yet work, or no one is playing
– Still a number of bugs
– Poor grammar in the game title 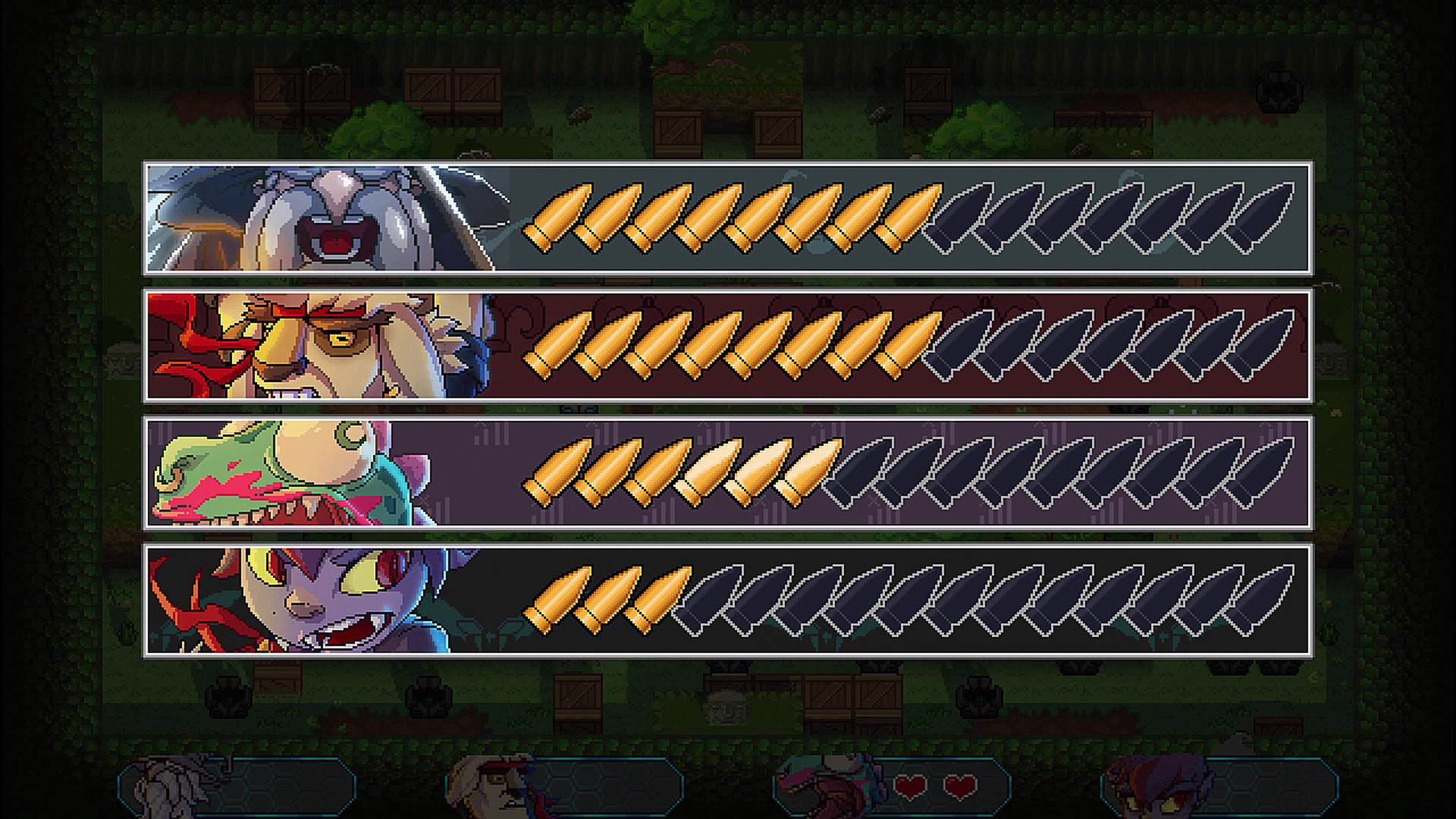 Overall
Guns N’ Boxes is an enjoyable multiplayer arena shooter that fans of quick action games like this should definitely keep an eye on. It needs more work, certainly, and could do with a whole lot more characters with different attributes, more arenas, and even more weapons, but the core is there, and it’s a reasonable amount of fun.