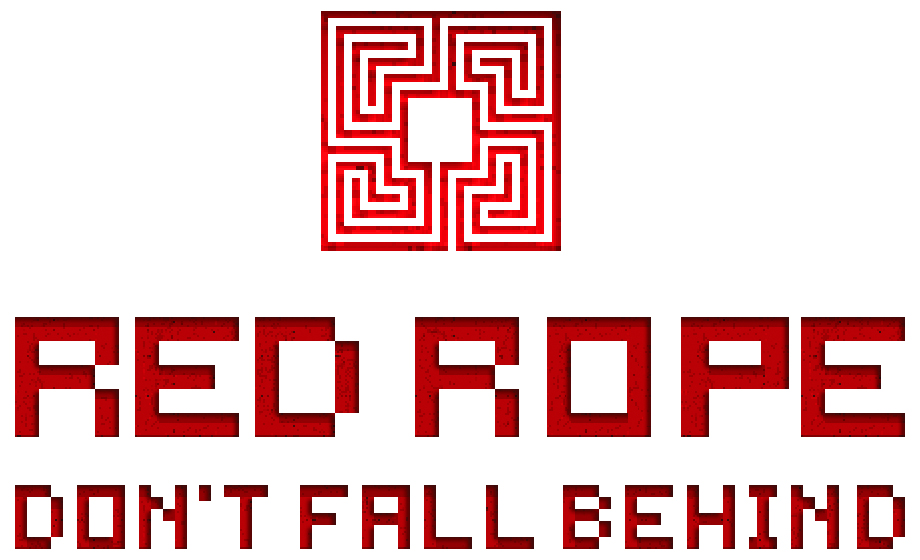 Most cooperative games are content with being on the same screen and fighting stuff together. In Red Rope, it goes much further as both players are locked with a rope and need to synchronize their movements to vanquish their foes and solve the puzzles. Or pull your partner into an enemy and yell at them with murder in your eyes. 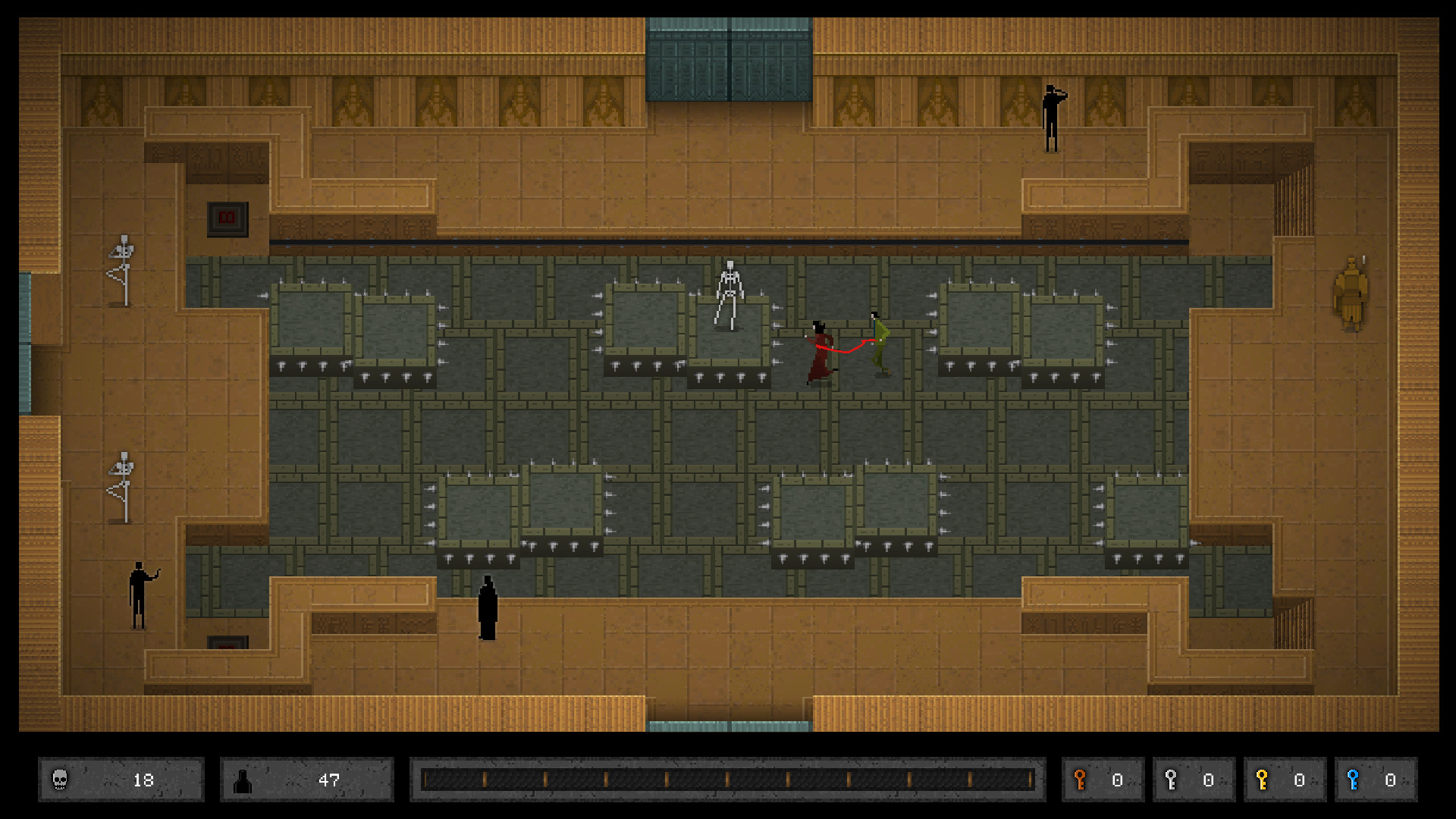 Red Rope lets you control your characters from a top-down point of view. The world you explore is in fact a maze whose configuration is different every time you start a new game from the beginning. The aim is simple: find the exit. An area usually gives you a few keys that you can bring back to the HUB to open a new area. Reaching the exit grants you immortality with in-game characters that share your likeness with pixel-art portraits! This is a really a nice touch from the Italian developers of Yonder, and a much better motive to complete the game than any in-game backstory would have achieved. 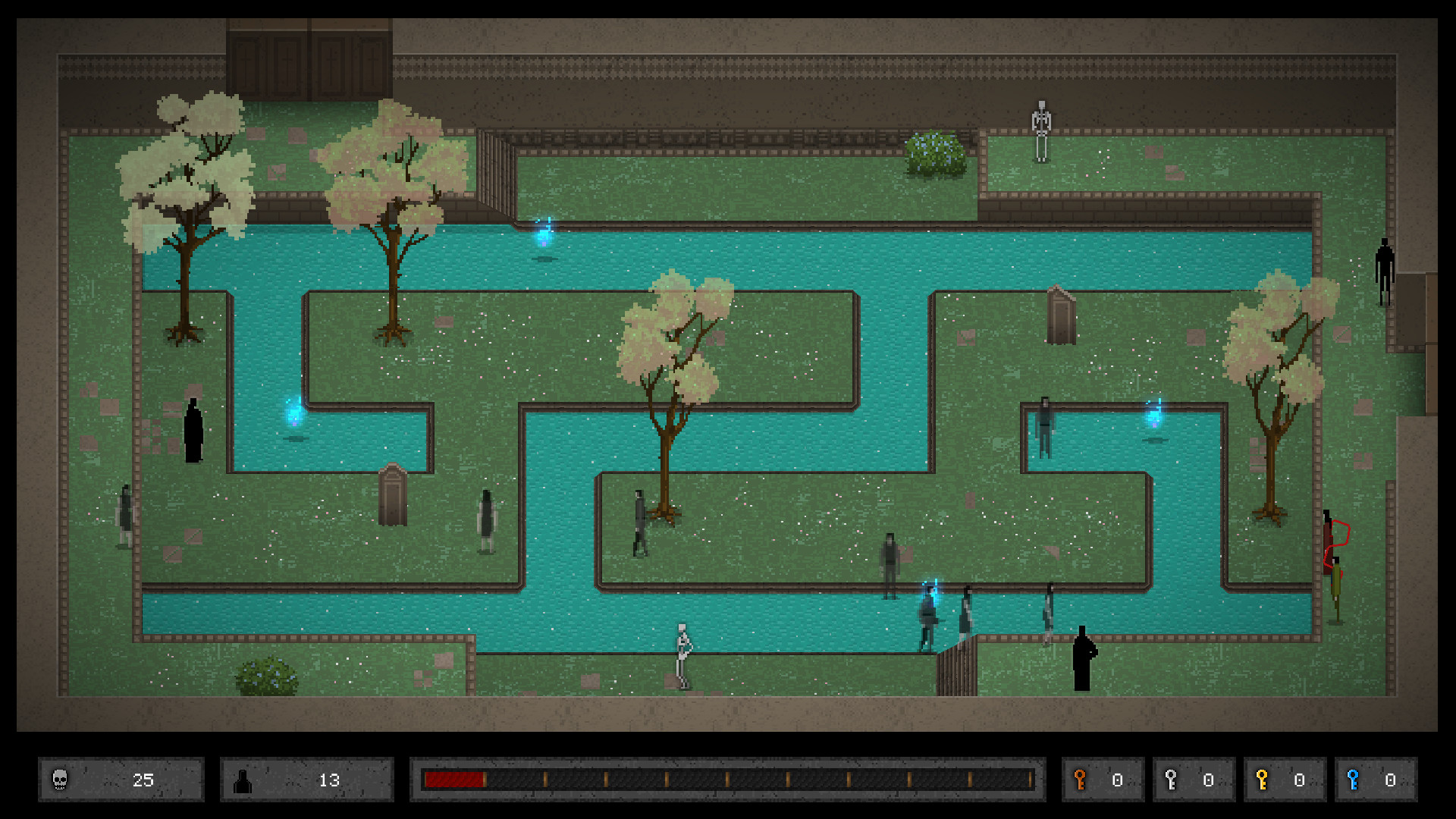 You cannot shoot or anything, all you can do is move and use to the rope to choke enemies. And that’s where the fun and difficulty of the game lies, because both players have to work together if they want to have enough rope length to wrap around the target. If one of the two scatters in a random direction, death ensues. There is a satisfying physicality to the rope; when it is fully extended one character can pull the other. And when one pulls the other into an enemy, bitterness and rage ensues. If one player is not as reactive as the other one, frustration can lead to anger, anger can lead to the dark side, and the dark side can lead to a break-up. “I AM SICK OF YOUR ROPE! GO HANG YOURSELF WITH IT!” she said before slamming the door.

While this particular situation did not happen to me, I tried the game with several people as well as with myself (sigh). Because yes, it is entirely possible to play alone even though it is mind bending to handle two individual characters. I even went farther alone than with people. While it is not possible to rebind keys, there are plenty of configurations to choose from. WASD, arrow keys, a stick on each controller, both sticks on the same controller. All kinds of gamepads were recognized by the game. Nothing to complain about here. 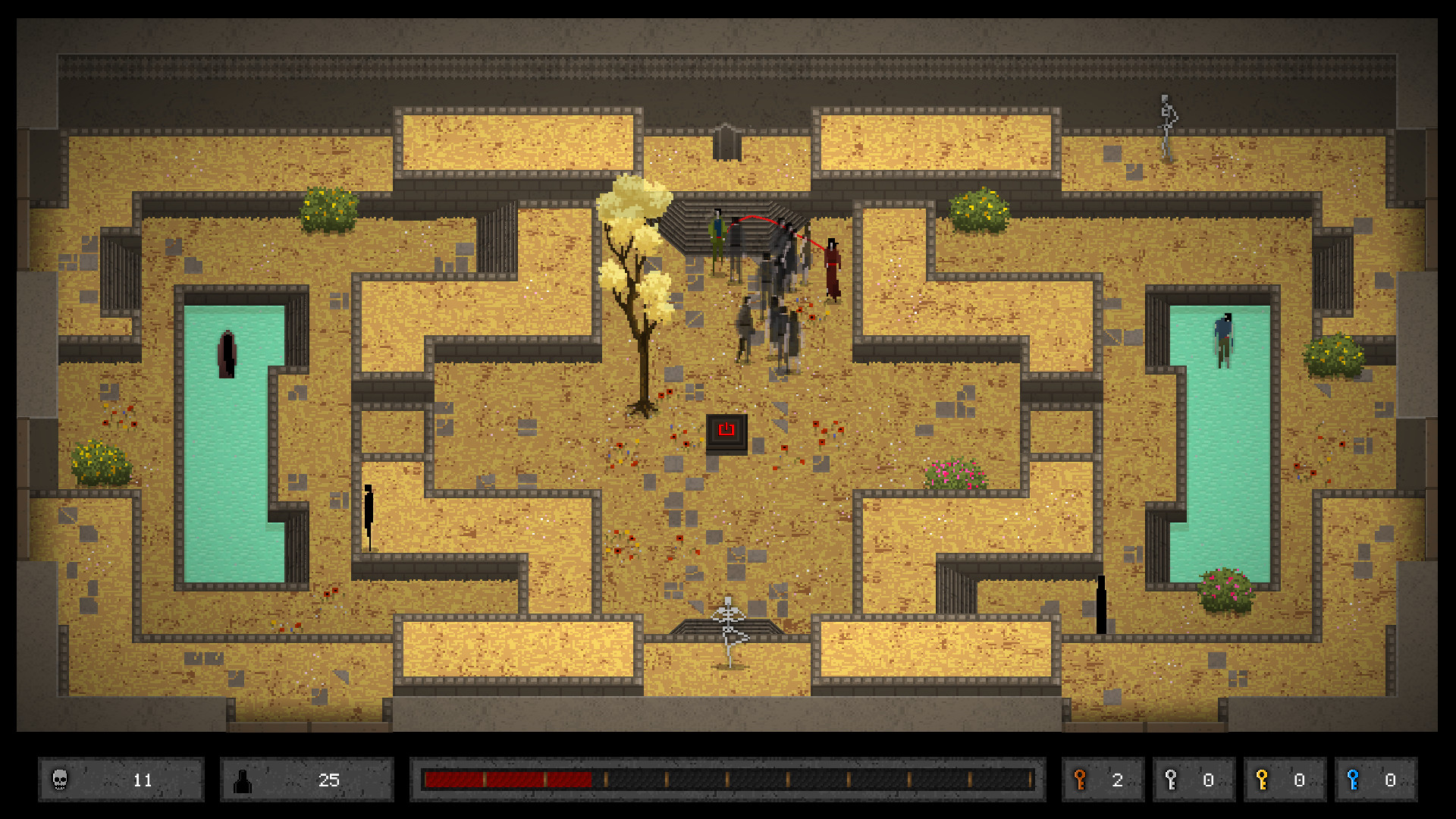 Back to playing the game with people, I know from experience that some get frustrated with the game very quickly and don’t see the point in playing. Patience seems to be required, at least until both have a good grip on how the game plays and what to do in the different situations. And there are plenty of different situations to figure out, as the game is quite enigmatic (which is reinforced by the sounds) and features many mechanisms to be discovered. Each enemy has its own way to behave and to be killed, and the rooms themselves can be a puzzle to solve with buttons to press by one player while the other one climbs nearby. Good communication between the players is especially essential when there are paths at different heights and it is very easy to cause the other one to fall.

Eventually, when both partners get used to how each mother move and they synchronize their attacks instinctively, it becomes beautiful. Until you start to panic because there are only a few lives left. The game starts with a hundred lives and there are ways to replenish them, including falling to the dark side and slaughtering innocent souls… However, once the counter reaches zero and the last life is lost, it is game over and the adventure starts over from the beginning. Until successful completion, I reckon quite a few hours can be squeezed from the game. Although having to go through cleaning the levels again upon reaching zero is quite disheartening, as this is a slower paced game rather than a shooter, and facing the same mechanisms eventually become a repetitive chore. 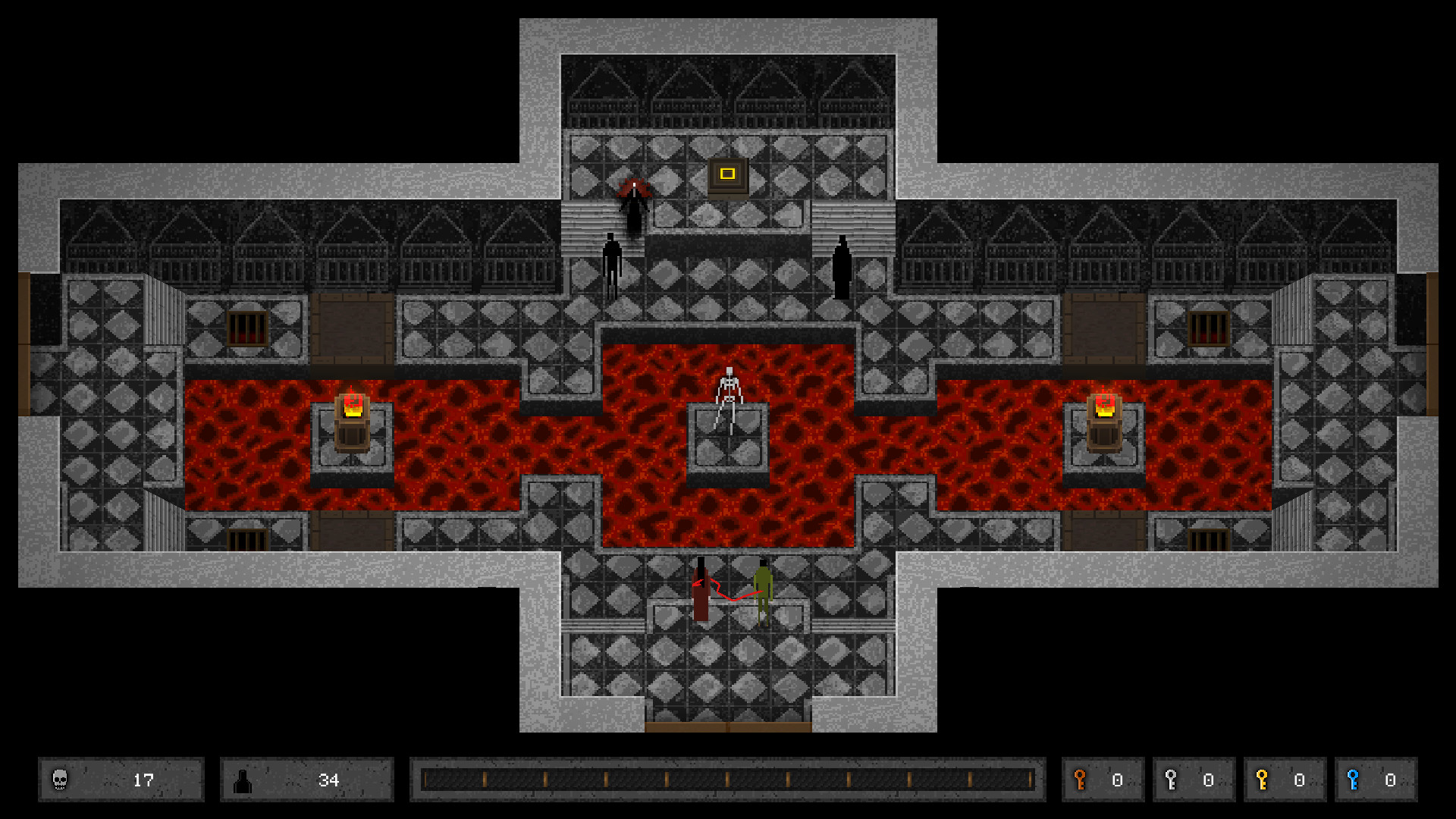 In conclusion, Red Rope is a truly unique Coop experience that will test the bond of the two people daring to venture in its labyrinth. Mastering the Rope with another player becomes a positive experience, that can be tainted by the tedious task of starting over after running out of lives. Escaping will require a good dose of observation, a healthy dose of reactivity and a truckload of synchronization, making it a risky game for those with little patience or prone to anger issues. Likewise, casual gamers might get frustrated by the difficulty long before completing the different sections of the maze.

Here is a video review :