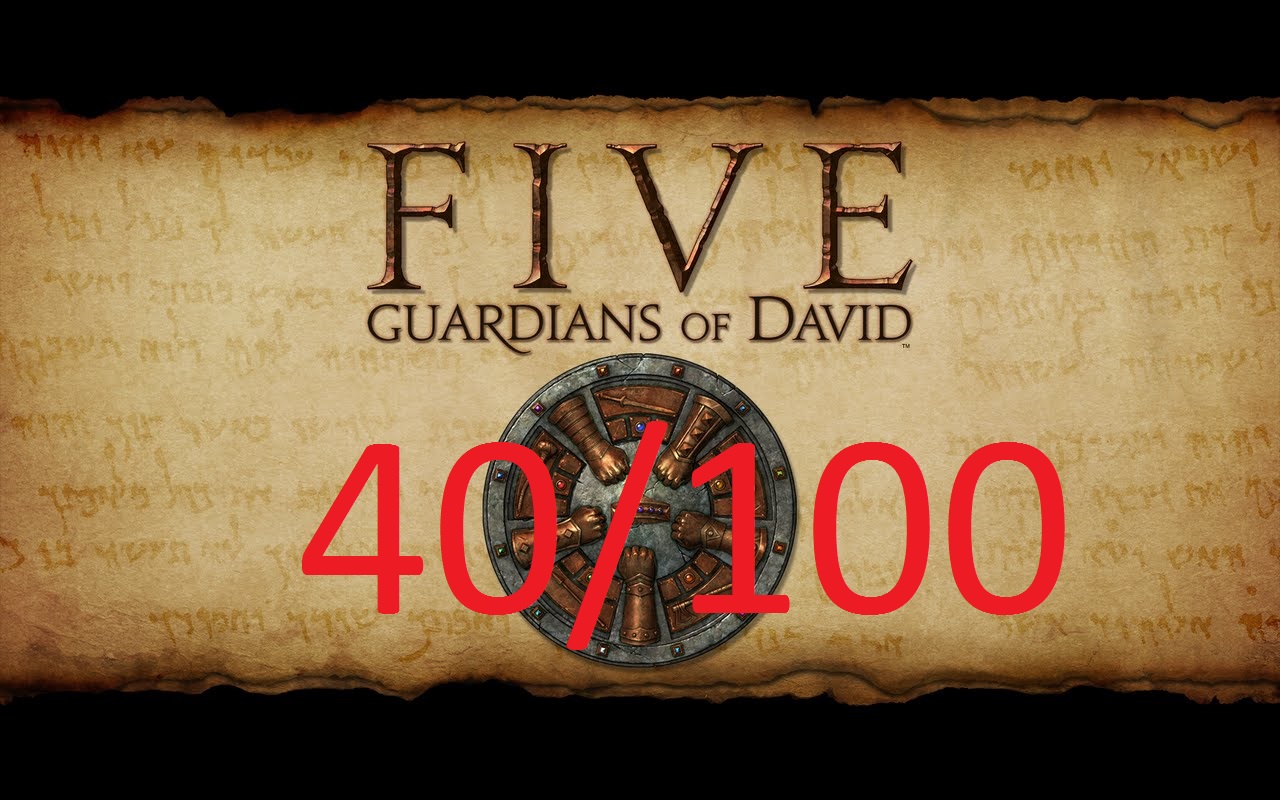 FIVE: Guardians of David is an isometric action RPG based on the Biblical stories of David’s life starting from a young giant killer’s perspective to an influential leader.

The story of David is at the center of attention right from the start, most of it depicted through comic-book style cut-scenes between the missions and the rest through scarce dialogue encounters in the game.  Artwork on the cutscenes is nothing to be admired at and before too long the hefty amount of text becomes too monotonous to really get you immersed in the story and its characters.

Voice acting in the cutscenes fits in well with the whole mediocre presentation. Low class production aside, hearing microsoft Sam lending a voice to certain side characters is bellow any standard (fixed in a recent patch though). Most of the time when you actually bother to pay attention to what the game has to say you get the impression that you are listening to some kind of a weird Biblical teaching device. Characters are paradoxically soulless, and despite being some of the most important Biblical figures, they have no personality whatsoever.

Representation of that storyline onto the battlefield is even worse. Missions you venture through will give you absolutely no sense of accomplishment as you literary won’t die. Even if you do, you will simply take control of some other character from your party of five. Atop of that almost every single mission objective in the game is a boring fetch quest where you must either destroy, collect, grab or pull something, killing hundreds along the way. At times even backtracking your way through the rubble, with mobs respawning along the way. 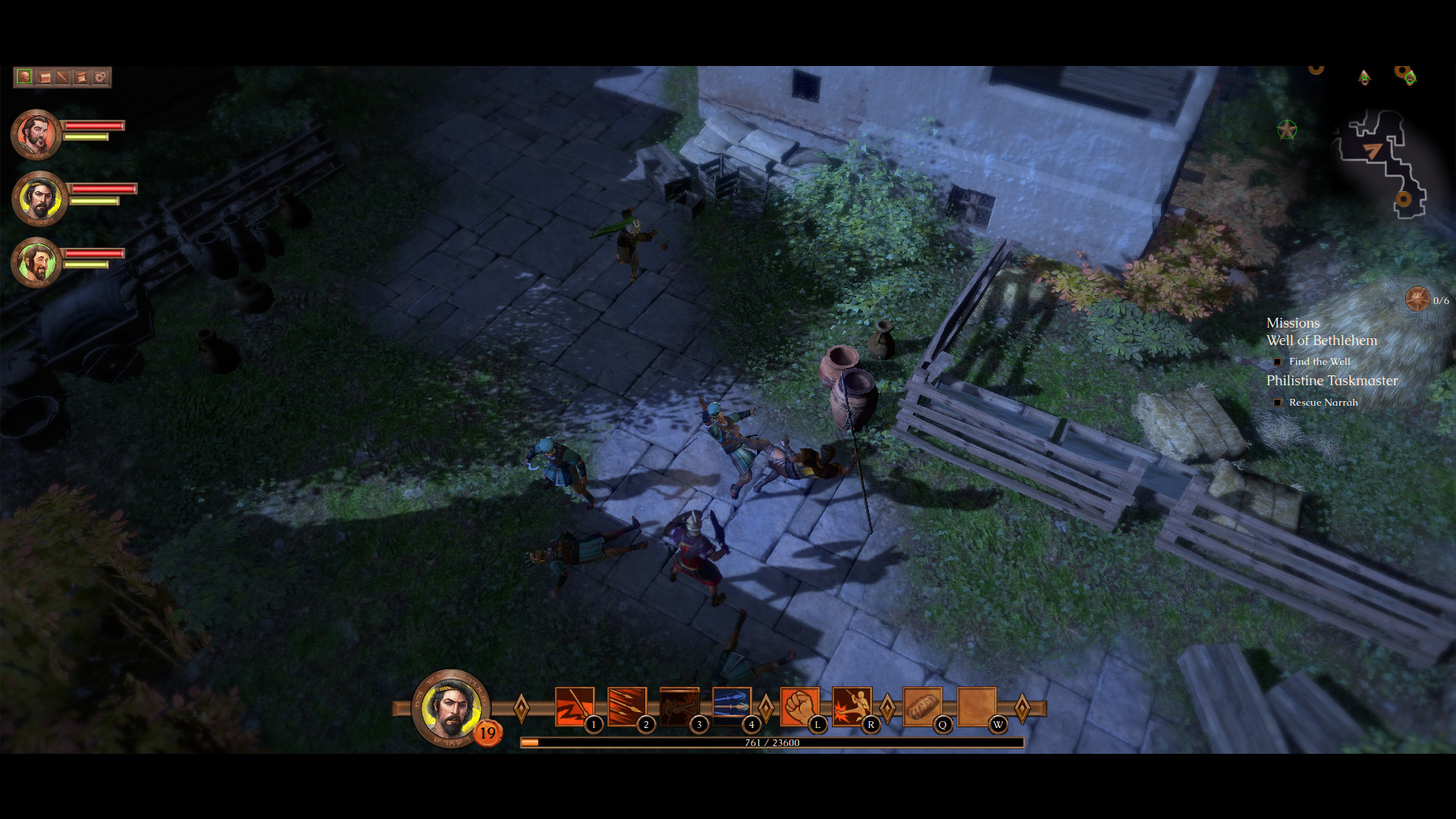 Combat revolves around droningly spamming combinations of your attacks. If you regulary interchange through your loot and inventory most of the attacks you’ll perform are one-hit kills anyway. The player controls a party of 5 class-based characters: ranged weapon users, spear wielders, sword and shield fighters. There is plenty of space for quite a number of collectible gear and weapons on the shoulders of five men you control, which unfortunately makes no difference due to the fact that such a casual combat doesn’t require you to even bother with comparing or even collecting new gear. You slice through hordes of enemies like knife through butter any give weapon.

Your character and the characters in your party just flail away at one enemy’s health bar and then move on to the next. It’s easy to switch from one hero to the next but doing so often seems pointless. There is no deapth or high quality here, not by any means a Diablo–style action RPG clone. FIVE: Guardians of David is simply a below average game for a below average player. On the other side FIVE being a “Bible Game,” doesn’t bring much of anything to the table other than slaying people by thousands, while promoting some kind of twisted morality through the comic-book cutscenes. 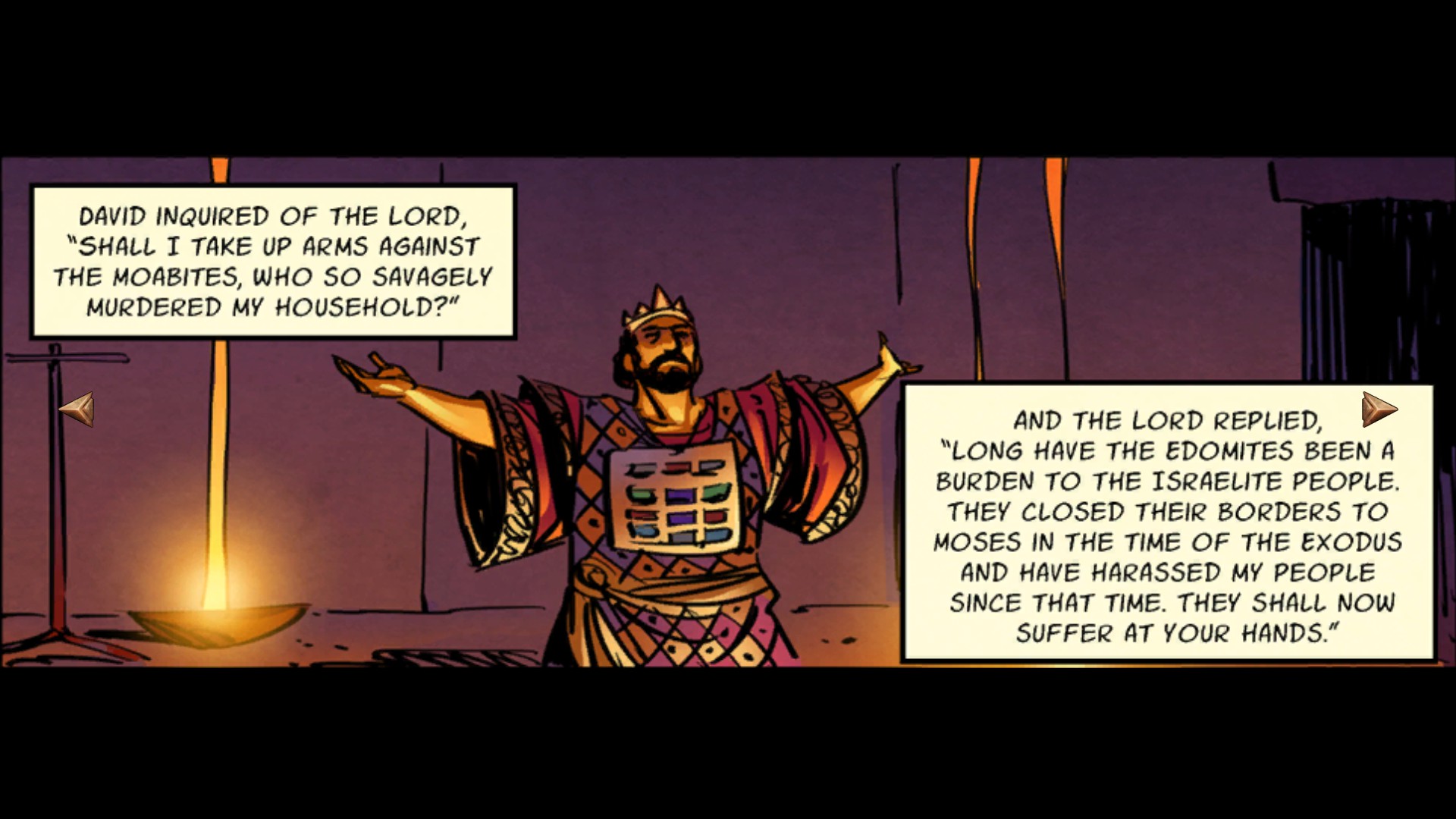 Levels are entirely linear and narrow corridors, with some kind of and open space usually associated to a boss battle (which you can’t lose, as you respawn over and over again). Leveling-up is done collectively by group and new abilities are auto-assigned by the game, though these can be modified. I haven’t seen a RPG with such a small array of customization for a very long time. Graphically a decade-old game makes you think that it would run smoothly. Unfortunately not as framerate dips are plenty and so are occasional crashes.

I really cannot reccommend FIVE to anyone. Fans of action RPGs have literally dozens of better games to choose from. Price of 22,99$ is ridiculous for the content you get. Aside from the novelty of the Biblical theme and story, FIVE‘s gameplay ignores a lot of what has been a standard in the genre for quite some time. Such important gameplay aspects as strategic groups, tactics and propper character development are nowhere to be found here. With its bleek heroes and dumb enemies FIVE: Guardians of David is something not worth your time or money.