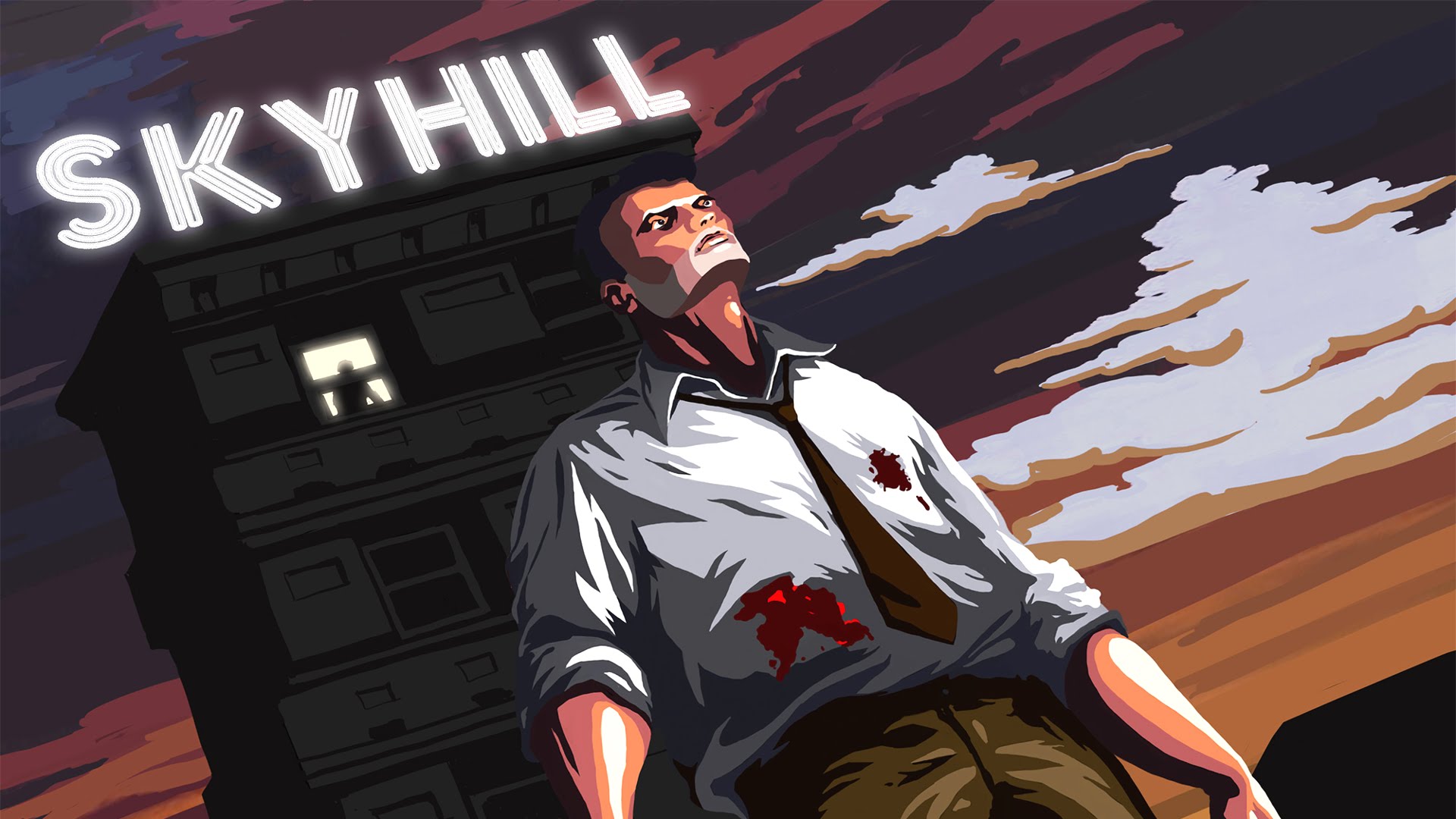 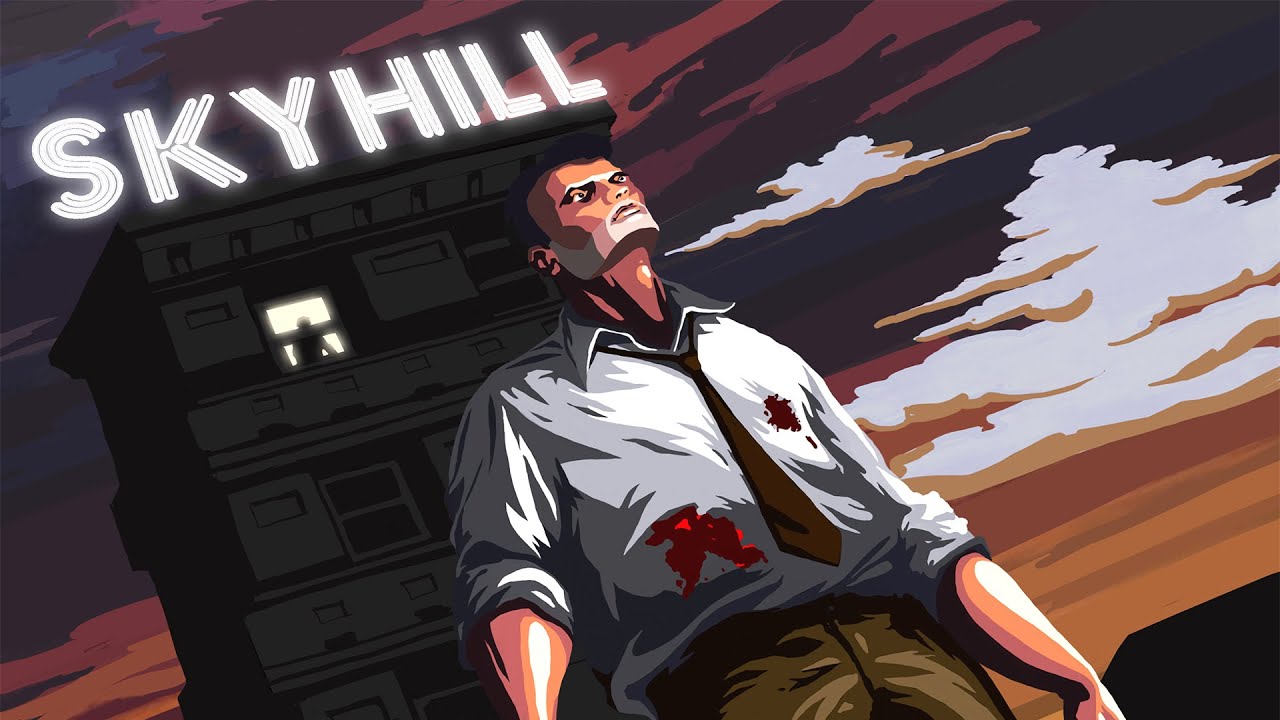 You’re in town on business and decide to spoil yourself a little. No one enjoys sleeping in a flea-ridden bed, so you to pay for a room in the best hotel in the city, which just so happens to have the best biological defence system available. You’re on the 99th floor, living it up. Everything seems to be going just fine, but then you turn on the TV and apparently things have gone to hell in the past 10 minutes. The Confederates have used a biological weapon in New Europe and the lady on the news is telling everyone to stay indoors. Then the PA system comes on and the hotel staff tells everyone to stay in their rooms. You hear banging at your door, followed by screaming; then an eerie silence, followed by hungry groans. Speaking of groans, your stomach starts to follow suite. This leaves you with two choices: (1) you stay inside and starve to death or (2) you go outside, face whatever is out there in search of food which you can use to eventually escape.

Dying in your hotel room, alone and hungry wouldn’t make for the most interesting game, so I think it’s safe to say that you’re basically railroaded towards the second choice. This is where Skyhill begins. 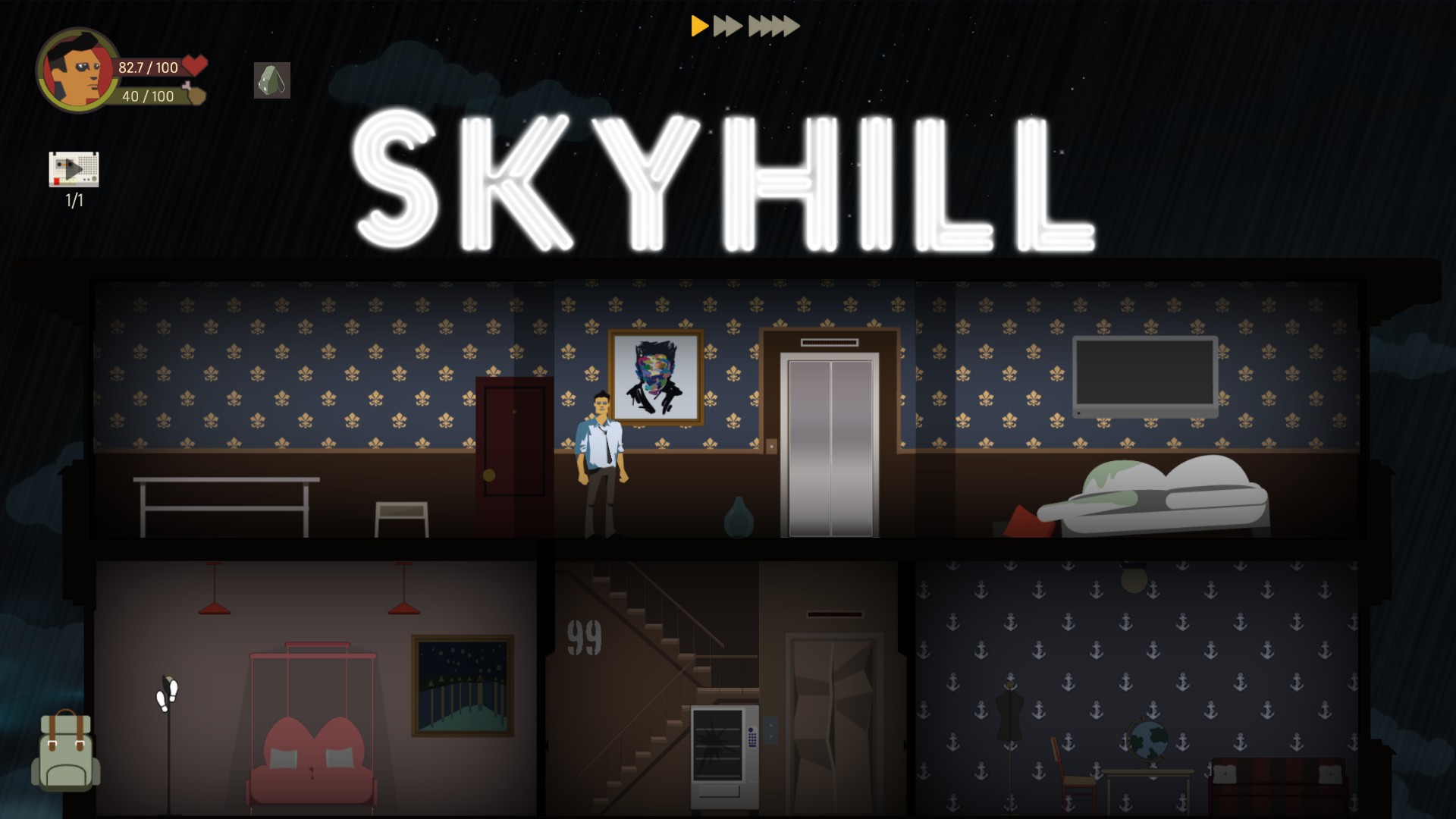 Technically, this isn’t where the game actually begins. There is a little introduction which basically mirrors everything I said in the first paragraph. Rather than the intro being in the form of a cutscene, the entire sequence is presented as a comic book, complete with sound effects and a narrator. The intro genuinely got me interested in the game, partly because I’ve been on a bit of a comic book spree recently, but mainly because I’ve always found games that look like comic books very stylish. I was glad to see that the art style used in the intro was also carried over once I started playing the game. What I liked about this the most was the fact that it works incredibly well with the level design. The hotel has 99 floors with 3 rooms on each floor, and the way you interact with each floor and room reminded me of the way comic book pages are separated into grids. Even the graphics had a comic book feel about it. I have to give Skyhill some credit here, because I genuinely did enjoy the art style. Sadly, this is where my appreciation for the game ends.

I have to admit, the concept behind the game is interesting. Fighting your way down 99 floors of a hotel, hallways filled with mutant monstrosities, scavenging for food and supplies you can use for crafting gear sounds very cool. The sad truth is that the gameplay, as well as the content, doesn’t really do the concept of the game any justice. 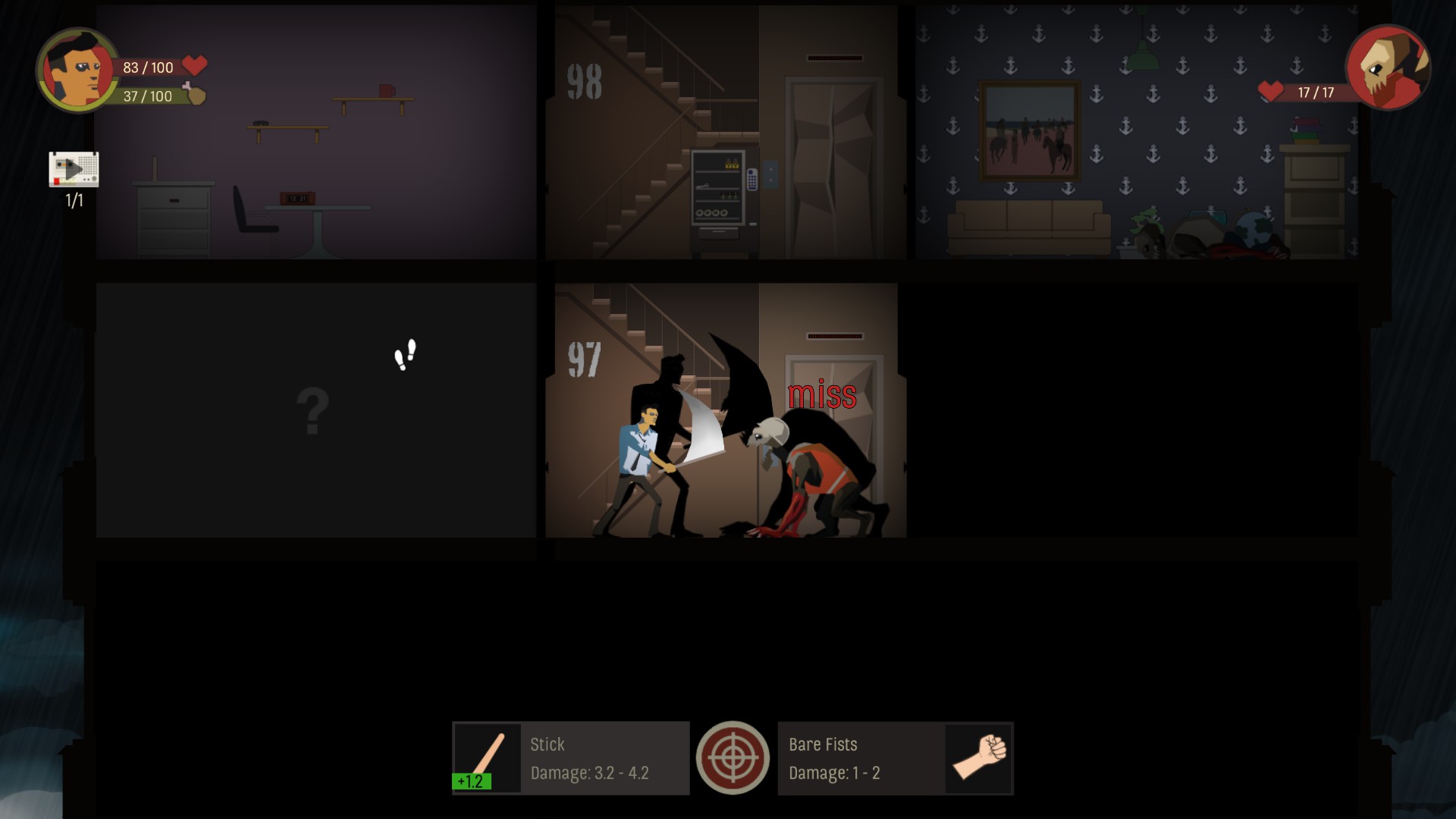 To start with, I feel like the level design, despite how well it fits the art style, is far too small and limited for a roguelike. 99 levels sounds like a lot, but the fact that there are only 3 rooms on each floor was incredibly disappointing. You’d also expect a roguelike to be different on every play through. While this is the case with Skyhill, considering the rooms will look different every time and will have different enemies and supplies in them, it still feels incredibly shallow. There aren’t enough enemy variations, only one drawer in a desk or cupboard can be opened and the supplies you find, while also being randomized, don’t have enough variation. Even the rooms don’t really look that different. They might have a different wall paper or maybe a desk where there wasn’t one before, but that really is about it. The entire game just feels so small. The rooms are small, and the only thing connecting them is a flight of stairs going down the middle. 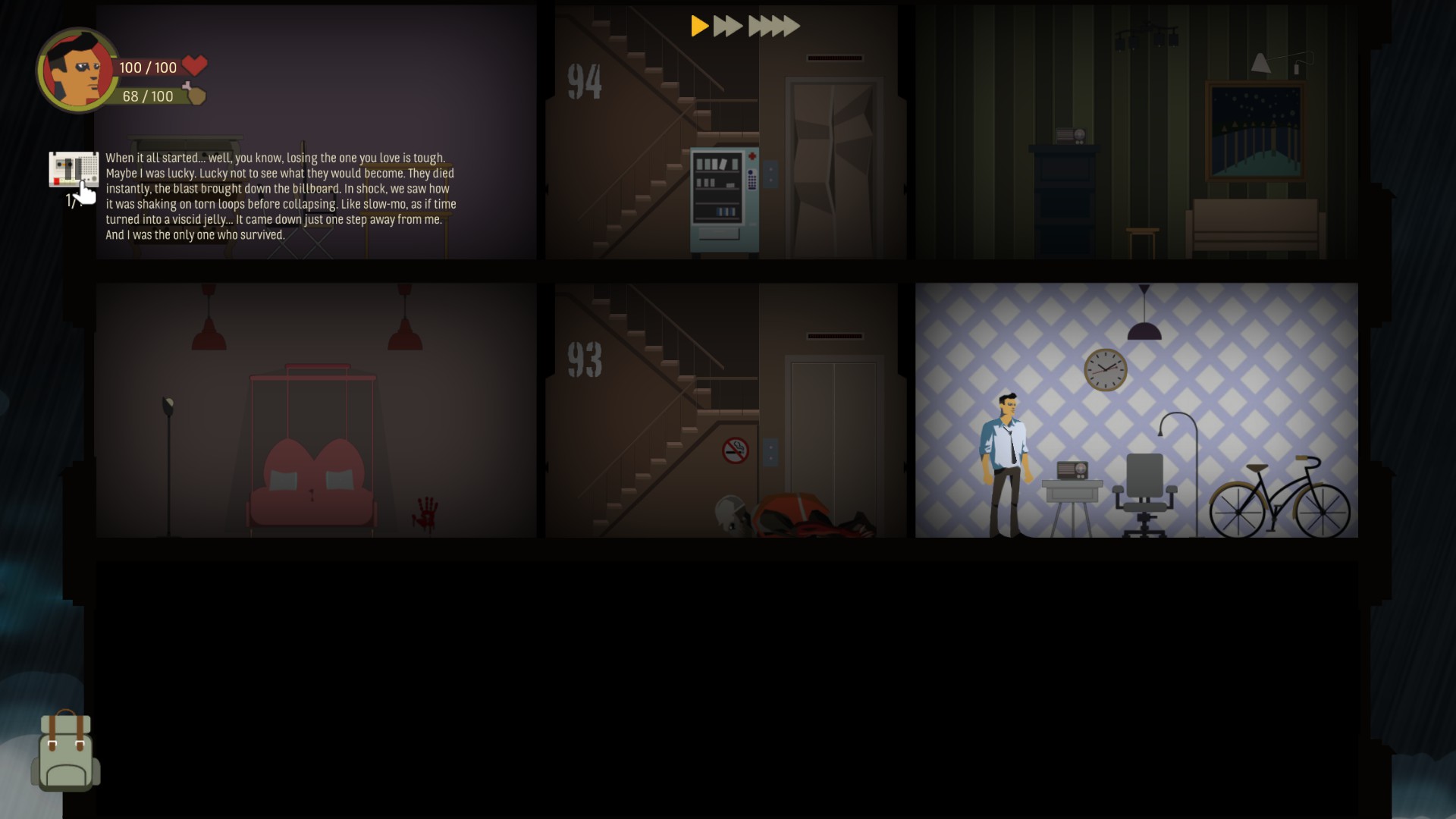 To make matters worse, you aren’t even in full control of your character. The game plays like a point and click adventure, but even then, you can’t even control where you character moves. They will move to exact same place on every floor and in every room, regardless of how violently you click your mouse – begging the character to move. I get why the developers did this, there isn’t really much point in being able to move your character any further than it he needs to be, but all this really does is illustrate how tiny the game really is. You don’t feel like you’re in a hotel. You sort of feel like you’re in a long, thin tower with rooms that could physically only fit around 3 of 4 people before it starts to get claustrophobic.

The combat is also incredibly shallow. It’s a simple turn based, click-to-attack affair with no variation in the way attacks look. The only control you have, if you choose to use this function, is where on the enemy’s body you choose to attack. 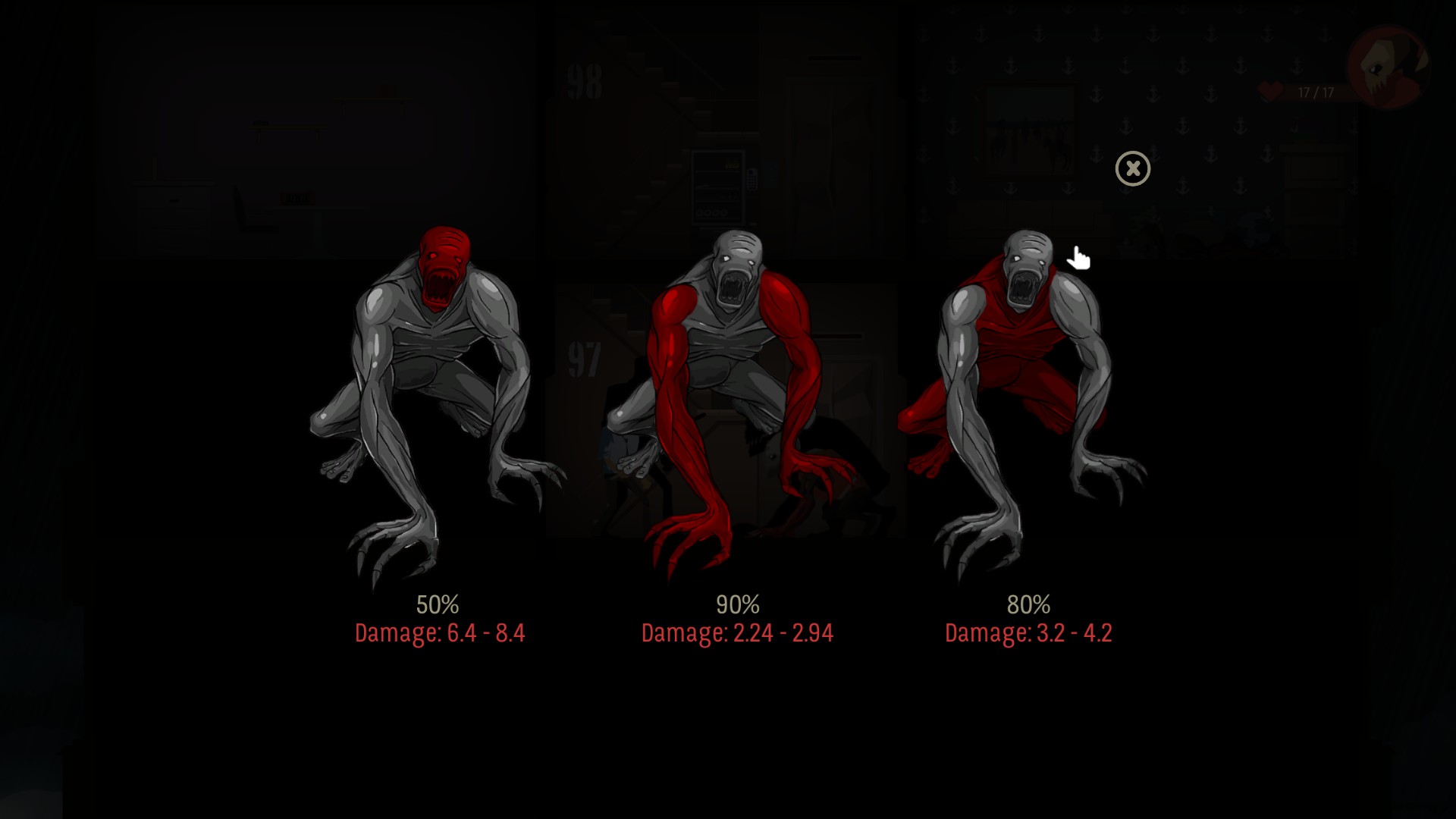 I will admit that the health and hunger system is pretty cool. You do have to plan your movements carefully because they take away a point from your hunger, and despite how shallow the scavenging system is picking up a good piece of food so you can keep moving through the hotel does feel nice.

See, the sad thing about Skyhill is that it’s not a bad game per se. For what it is and what it’s trying to be, it’s actually pretty good. But considering how shallow and simple the game is, I cannot in good conscience justify the price tag it has. As of writing this, the game is £11.99 on Steam. That is way too much money for a game that feels and plays like a something you’d find on Newgrounds. Again, that isn’t a bad thing at all. Honestly, if the game was free or maybe 6 or 7 pounds cheaper, I would certainly recommend it. I had fun with it, despite how simple and restricted the game was. But the truth is you can find much better roguelikes for a similar price on Steam.