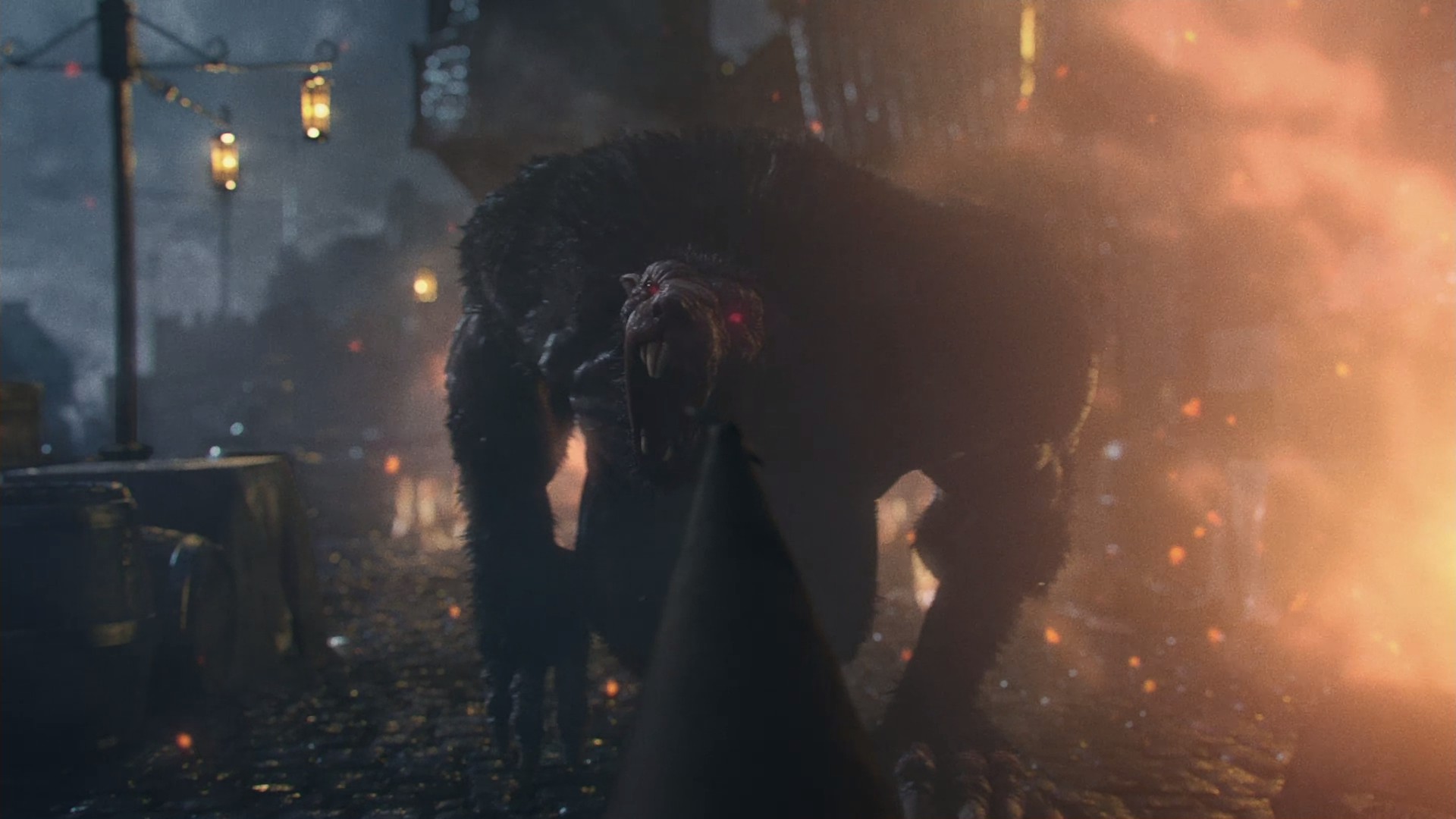 Welcome to Uberseik, a town invaded by Skawen, humanoid rats that are killing everyone in their path. The town urgently needs help so pick a hero, choose your weapon and fight off the ratmen. Of course it wont be easy because the Skawen are swarming, well, like rats. Your best and only chance of surviving and winning the war is to stay close to your teammates.

Vermintide is a first person co-operative adventure game set in End Times of Warhammer Fantasy world.  Once in the game, you get to choose between 5 different heroes, each unique in their own way. You have a witch hunter named Victor Saltzpyre who is equipped with a nice quick sword and two handguns. Then there is Kerillian, an elf waywatcher very agile, quick with her daggers/swords and bow and arrow. Where there’s an elf you’ll usually find a dwarf who is doing his best to be better than the elf. His name is Bardin Goreksson and he is a dwarf ranger, equipped with an axe and shield and a crossbow. Good hero for tanking and throwing the rats all over the place with his shield.  Sienna Fuegonasus is a bright wizard who manipulates fire. She shoots fireballs with her staff and it can get pretty fun playing with her but who plays with fire is gonna get burned. Really, you can burn yourself if you use too much magic so you need to cool down every now and then. Last but not least is Markus Kruber, an empire soldier. He carries a big hammer good for smashing big groups of rats. He also has a pretty nice gun. Of cource, all off the heroes I mentioned can be equipped with lots and lots of different weapons you will get after completing every mission. It is up to you what type of hero you want to make. 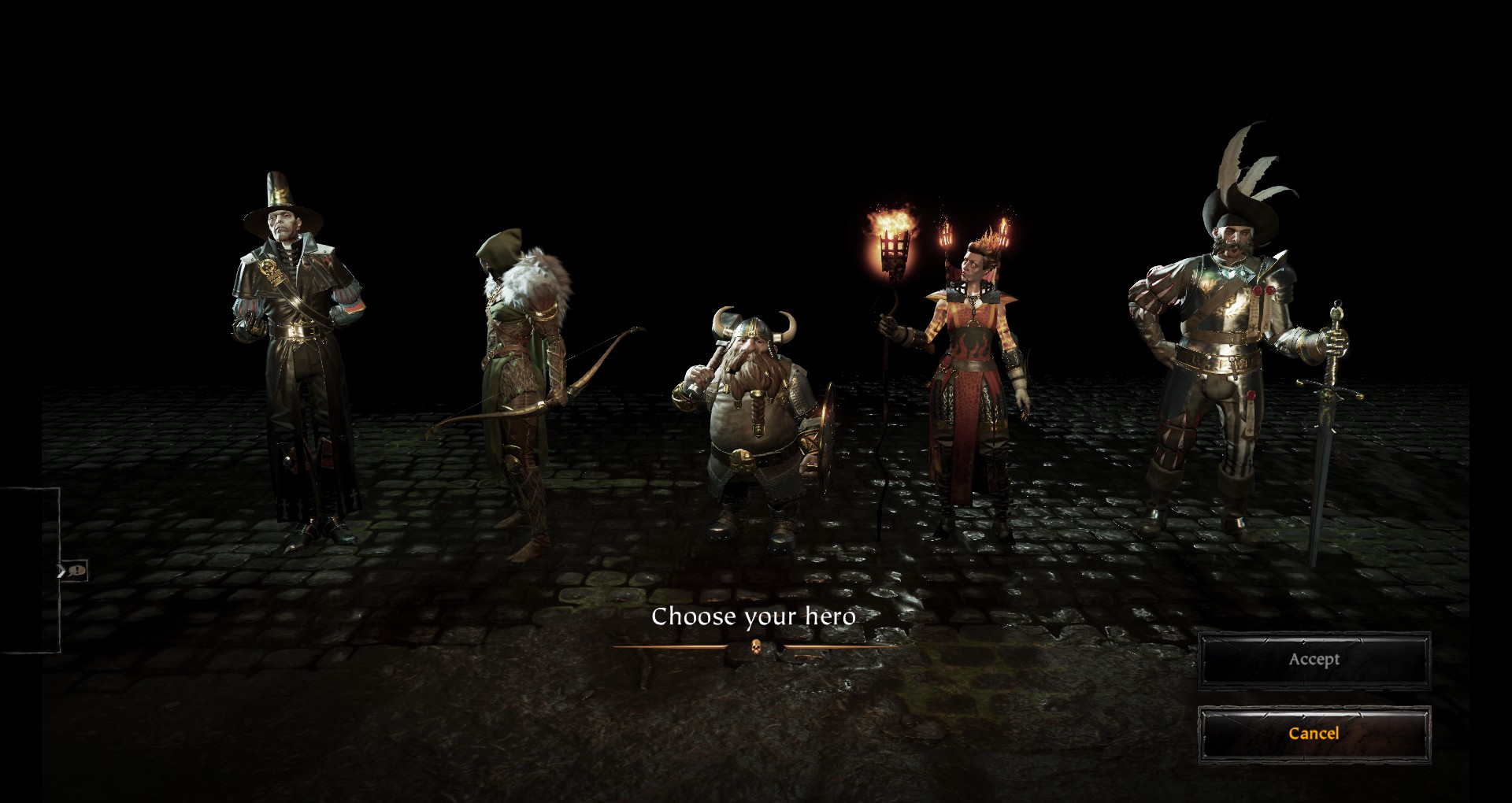 The game starts in Red Moon Inn, basically your HQ from where you start all of your missions, equip and forge your weapons. In every mission you will be placed in a 4 man party so you’ll need to work together in order to complete the mission. Teamwork is crucial in this game if you want to complete a  single mission. There is a good tip in the game that says „Stay together or die alone“. For real, if you get too far away from your teammates there is a good chance you’ll get attacked by an ex. assassin rat who’s goal is to kill you, of course. There’s the packmaster rat who will capture you with his pole and leave you hanging on it until you die. Either way, you will need your teammates to rescue you. There are many types of rats; assassin rats, packmaster rats, commander rats, ogre rats, gas rats…so be careful if you like to wander alone. If you’re not much of a teamplayer you can always choose to play solo games with 3 bots by your side. 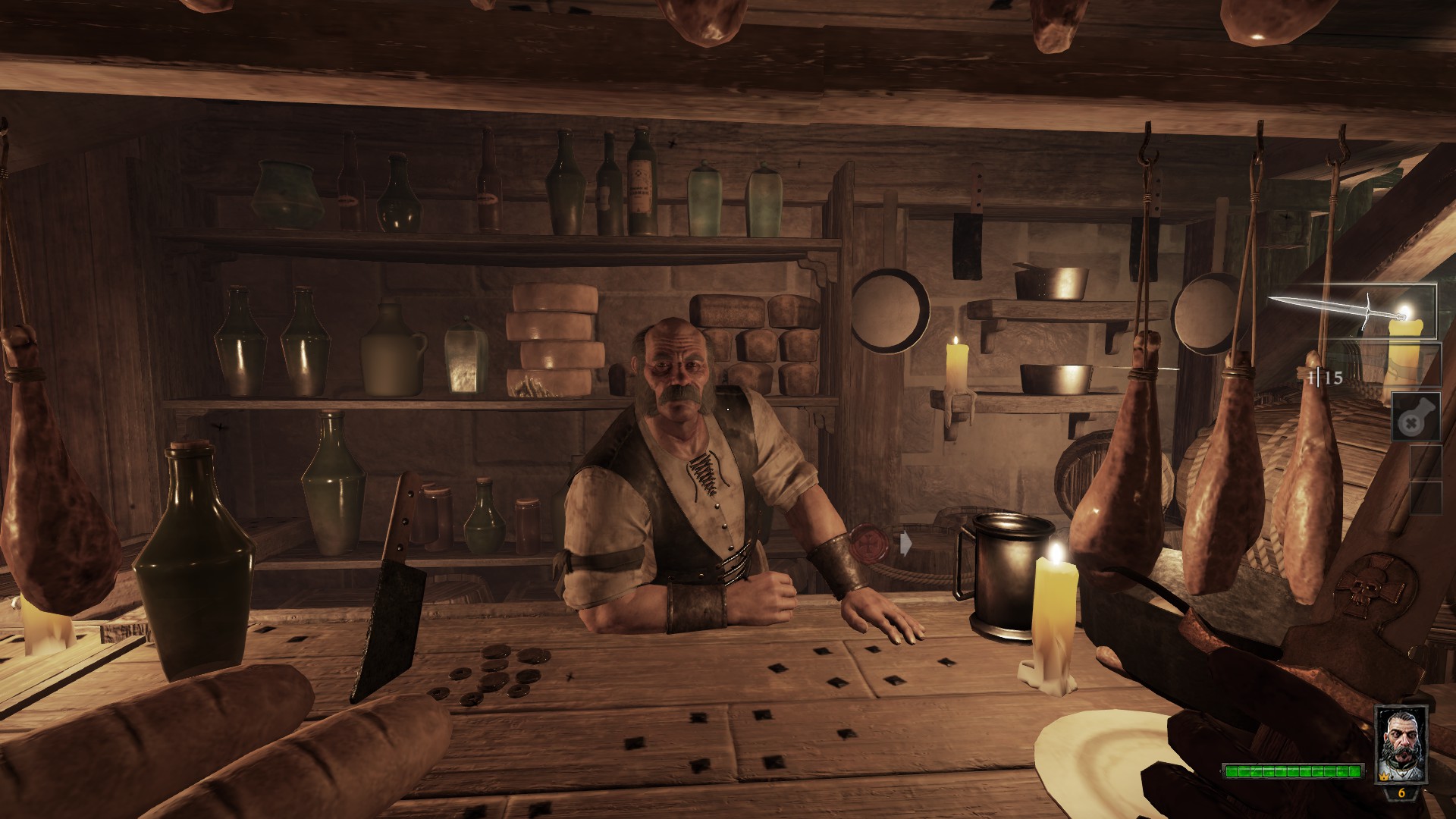 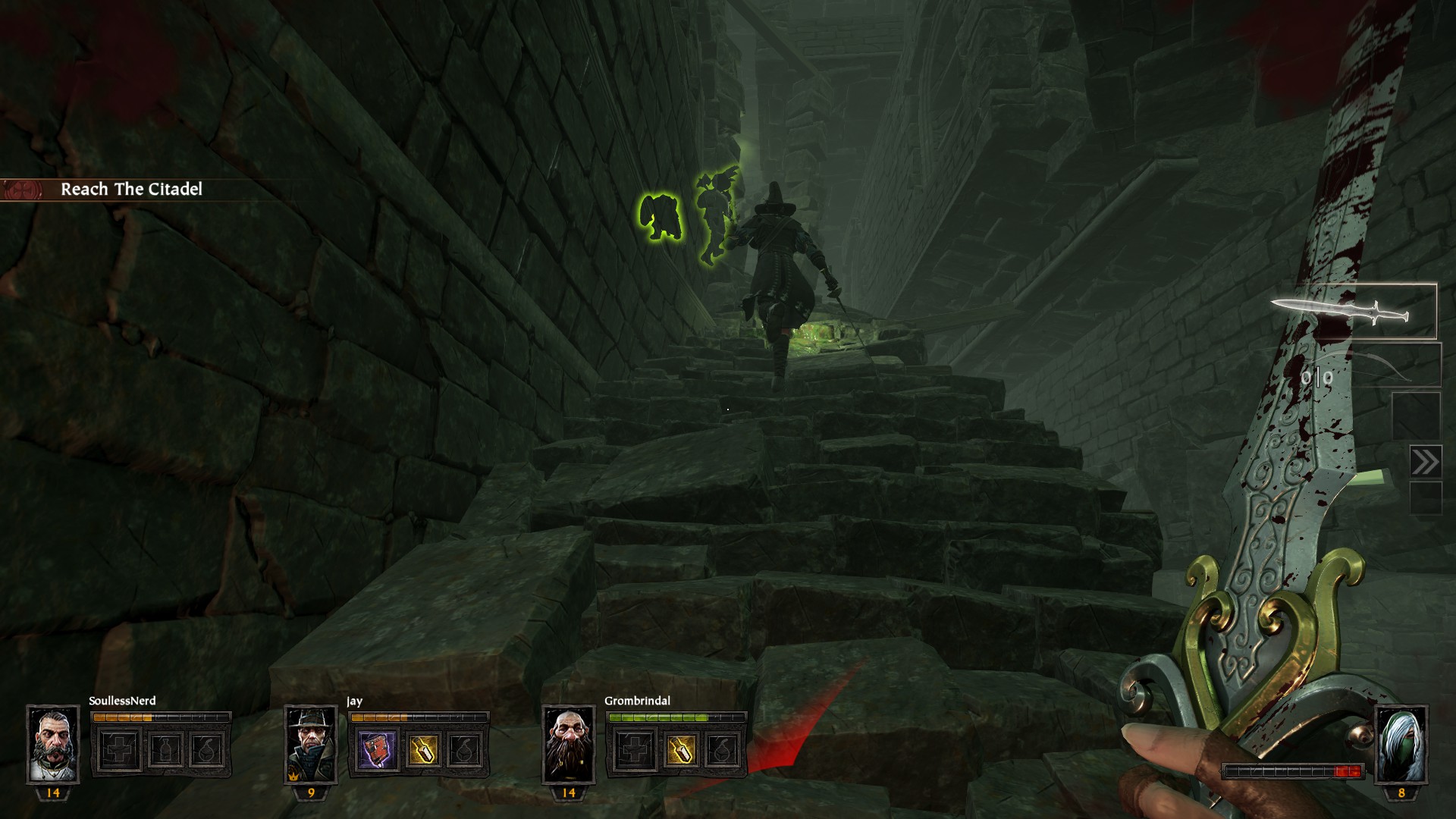 The missions of the game are very dynamic. The enemy spawns in such a way that no matter how many times you play one mission, you can always get surprised. The hordes of rats keep coming from every hole, window, over every wall, you just have to be on alert all the time. It’s what makes the game really interesting and fun. The heroes are often making jokes about how many rats they’ve killed and who is better in doing it. You just can’t get bored. The physics of the game are really satisfying. The developer did a great job. 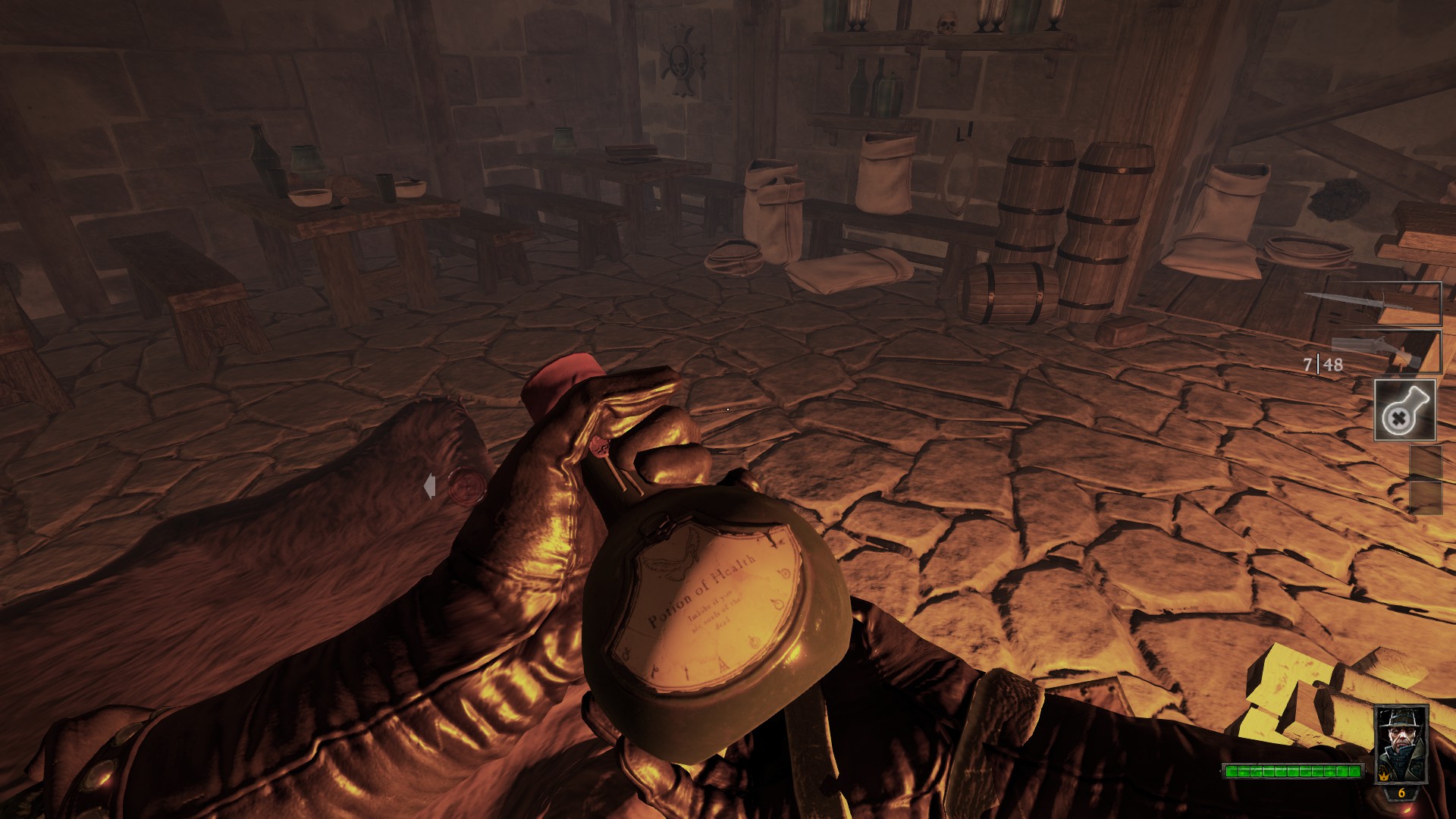 The good thing is you don’t upgrade your heroes one by one. You have one character, yourself, and you collect xp and level up so non of the heroes gets left out. That is good if you like playing just one or two heroes so you don’t get a big level differences between the heroes you play and the ones you don’t. They only depend on what kind of weapons you equip them with. The weapons can be upgraded (forged). You can get lifesteal on your weapons, speed upgrade etc. I’ve noticed that the lifesteal has no real use in the game since it’s a 5% to 12% chance you will regenerate your health when hitting and enemy with a charged attack. I think its too little to be noticeable. The good thing is you don’t lose your xp if you fail to complete the mission.

All in all it’s a good and fun game to play in which you learn about importance of teamplay and you get to learn some of the words in dwarf language along the way. 😀