2D models in a 3D world full of colourful characters.

For my entire life, my vision has been terrible. I have no depth perception, my prescription on my glasses is enough to bring other folks to bouts of dizziness simply by peering through the lenses, and I’ve related to Velma Dinkley since I was old enough to interpret language. It’s the first point that has given me the largest issues in my life. Platformers are, to put it mildly, an occasional hellish place for someone who can’t properly interpret how far apart things are and how much power or force must be applied to jumps in “easy” platforming segments. When I was younger, this would endlessly frustrate me. I would play platformers in small bursts until frustration made tasks wholly untenable, and then get back to an RPG or something easier for me. As an adult, platformers are one of the hardest types of games for me to play at all- specifically those of the 3D variety.

Demon Turf is a 3D platformer. It’s a unique one, in that the character models themselves are 2-dimensional. This can (especially if you tend to struggle with this type of game) sometimes prove difficult to visualize. Lucky for Demon Turf, it doesn’t make the game any less fun, so long as you’ve got a stubborn streak like me. 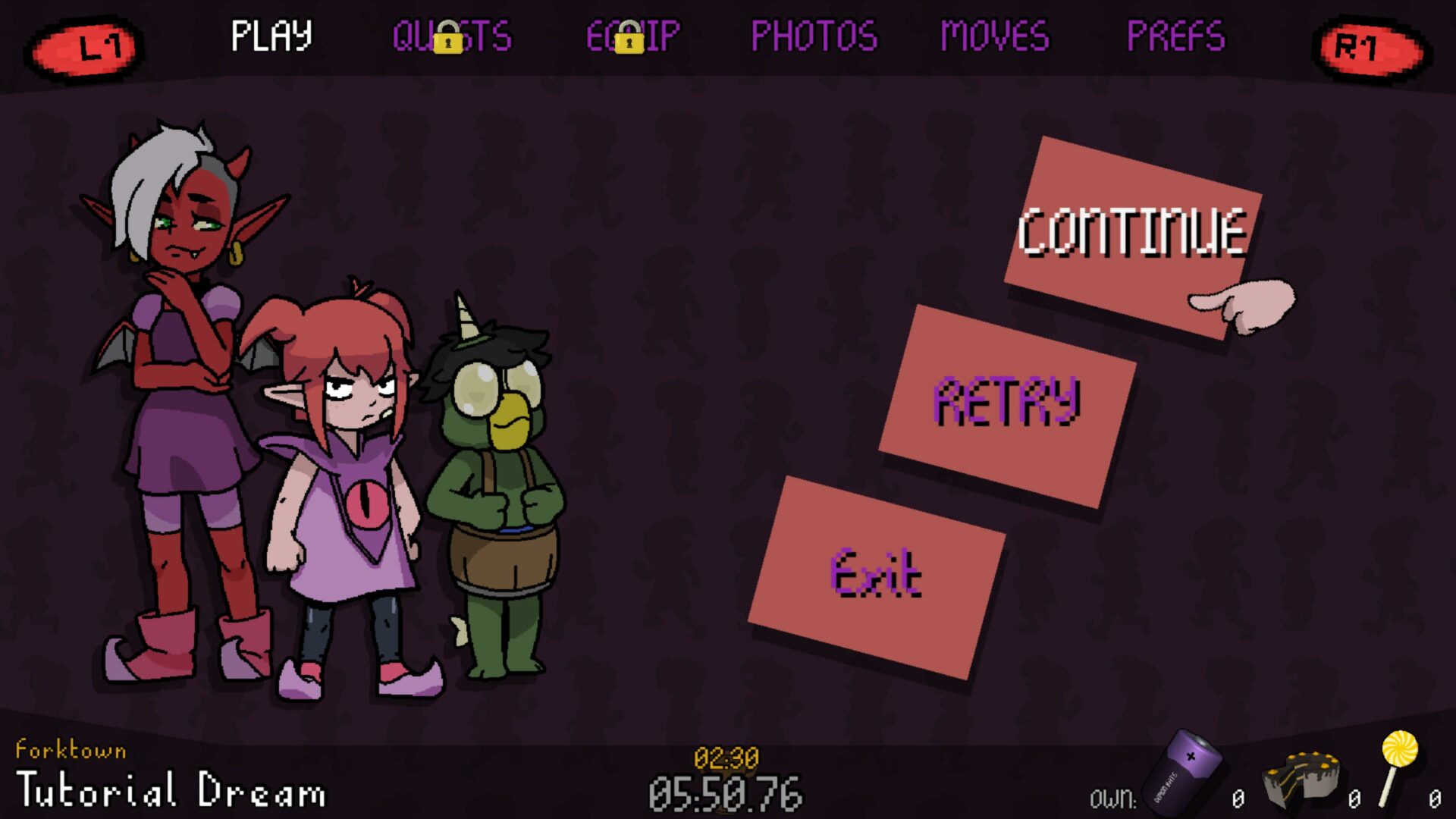 A young Demon named Beebz wants to usurp the Demon King’s throne. From what is immediately notable in the introduction of the game, this seems to be for an alright enough reason- the Demon King is a jerk. He’s full of himself, seems to have near absolute power save for some “leaders” of subsects of this world, and makes fun of Beebz relentlessly. To be fair, most of the other Demons in the world don’t seem to take our tiny protagonist all that seriously. They treat her like one might a ferocious kitten often, hardly even properly humouring her.

Still, this doesn’t stop Beebz. If anything, the derision and lack of respect make her want that throne even more. In order to fight the Demon King, she must first collect batteries to lower the bridge to his castle. To get these, she must defeat various turf leaders in the area, becoming the leader of the gangs present and establishing herself (hopefully) even more as someone to be feared. 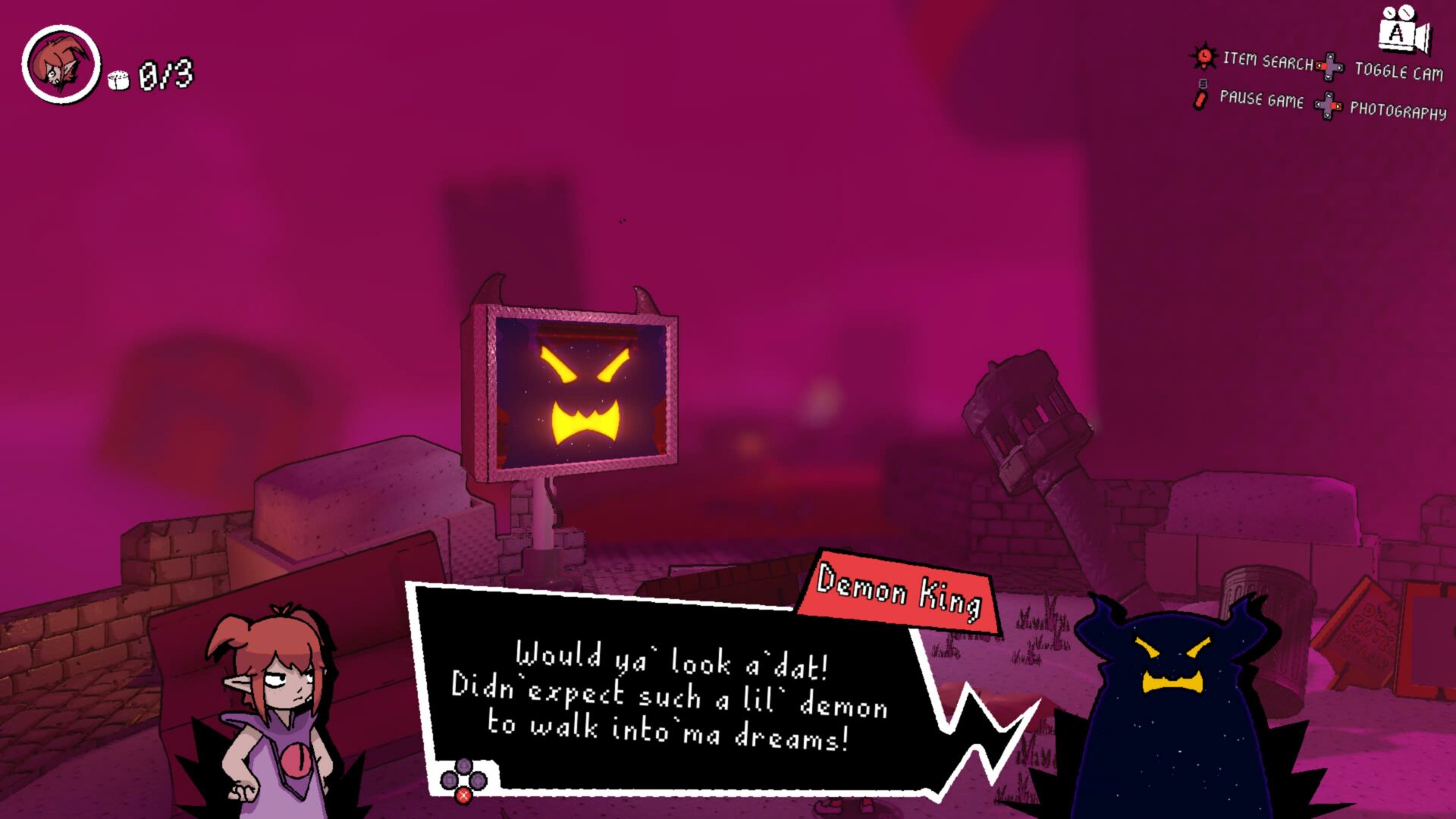 Throughout the entire story, she’s got her friend Midgi by her side, a competent, nerdy little Kappa. It seems that he’s the only one that might actually believe she’s capable of following through on all her threats, and he does his best to guide her and offer tips. Another recurring character- one could argue that she’s a friend- is Luci. This is another young demon, and seems to be particularly bad at listening to anything Beebz has to say, but considers her cute and amusing enough. I loved every appearance that she had, and it seems Beebz is fond of her as well. There are tons of NPC’s in this game that are bursting with personality and life, primarily shop keepers or mini-game holders. They’re the best, and I encourage anyone playing this game to check everything out at least once. 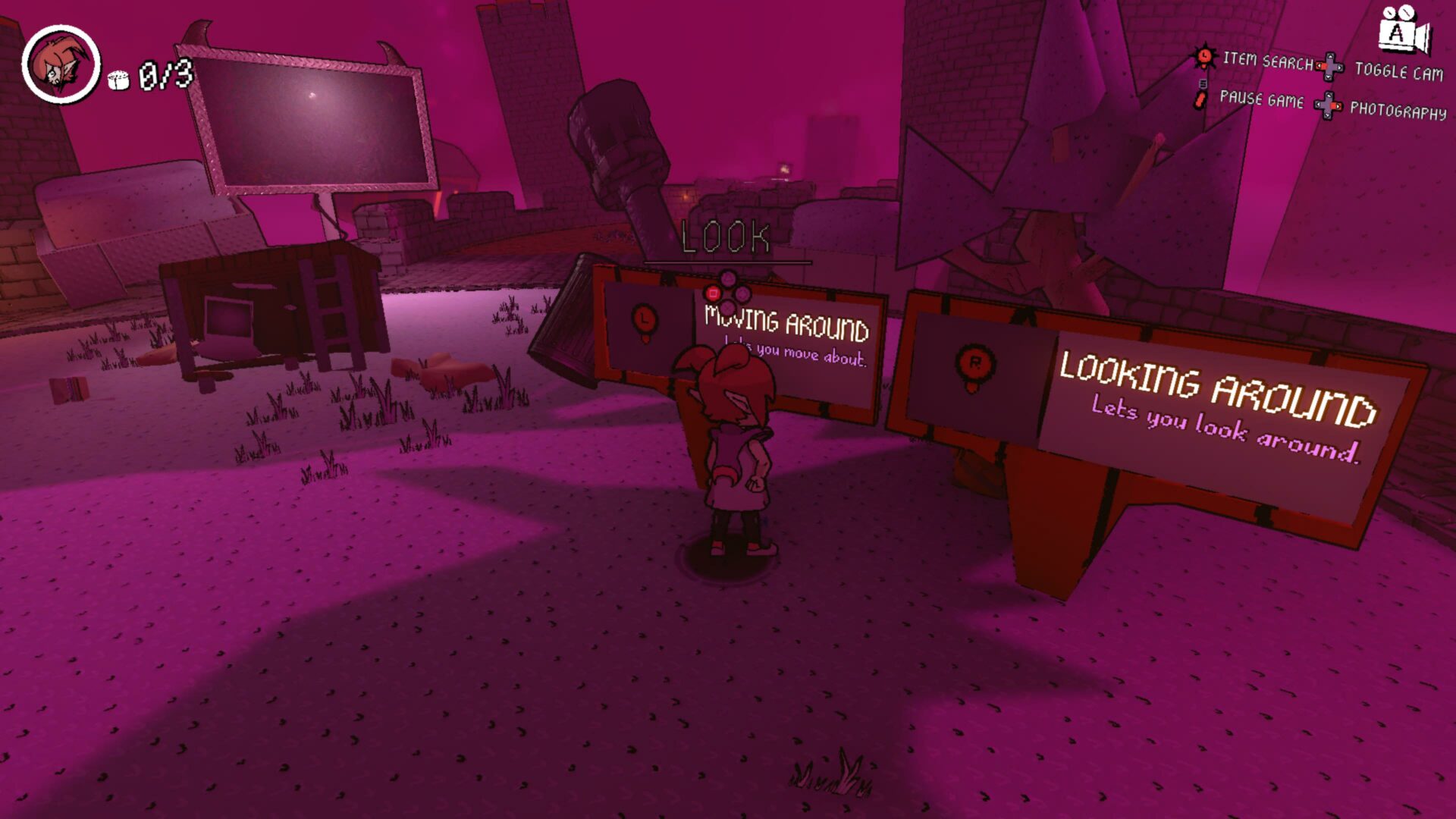 Graphics are the first thing people notice in most games, and especially in this one. Demon Turf’s graphics are charming, and I felt myself often looking at the models and how they would or wouldn’t rotate depending on the actions being taken. Beebz is chock-full of personality- she even has idle animations if you leave her alone for too long. The art is well-done, though townsfolk look a bit less clean than important NPC’s or voiced characters. That’s not a bad thing of course- it’s best that the characters you’ll look at the most will be visually appealing.

Levels are interesting, laid out well, and it’s easy to see platforms that are safe and places to go. While platformers are intimidating, the game gives a tip rather quickly. One can always look at the shadow beneath Beebz model to find out precisely where she will land if they’re confused by the in-game model. Dangerous objects are also plainly pointed out by the vibrant red colour- meaning that you absolutely should NOT touch them. While it took a bit to train my brain on this, it’s a very eye-catching way to tell me to steer clear of obstacles…or to push enemies into them to kill them. 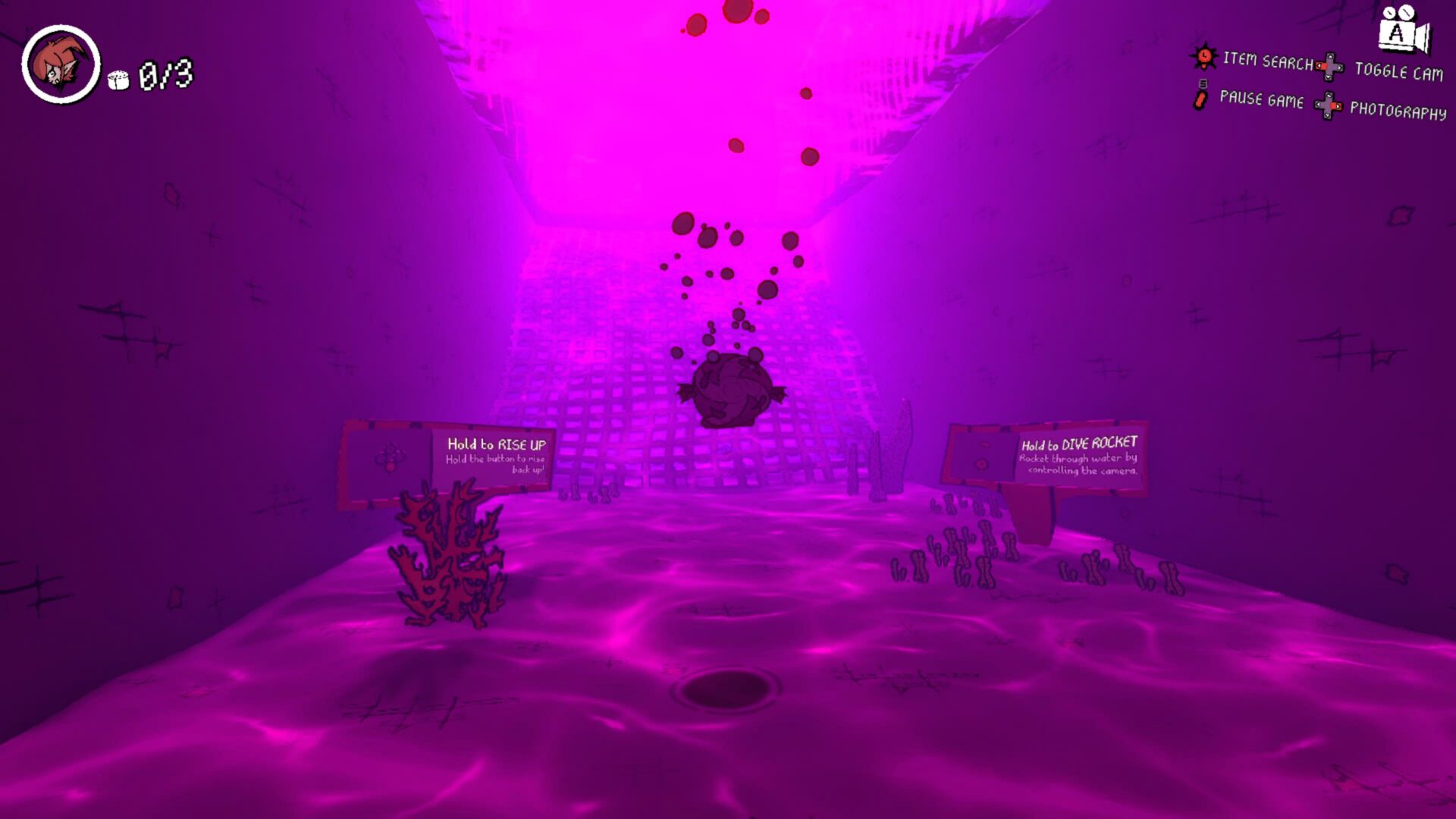 Here’s the big, girthy part of this game. Demon Turf is far more than just platforming- Beebz also gets upgrades from each turf area after defeating the main leader, like a grappling hook. This tool allows her to fling herself through the air and to higher platforms, allowing further ways to interact with the environment.

There are, of course, the standard controls for platformers. The game also has an option to set the camera mode to auto or manual, which can be toggled on or off with L3 (clicking the left stick in). The down arrow can also be pressed, zooming the visuals in or out to allow more of the levels to be seen. Walking is also an option if you just barely press the stick forward, something I love in games as I enjoy slowly walking into new areas to fully immerse myself. It’s easy to run through games at all times, but every once in a while I like to pause to take things in.

Another point of interest is the ability to dive, as unlike other platformers, this game doesn’t kill you when you land in the water. In fact, Beebz has a special model that she turns into underwater, which resembles a cuttlefish. Mid-ear when she double jumps, flutter spins, or super jump, she also turns into a little bat, and each jump clears varying distances, giving extra flexibility in movement. You also get the freedom to set your own checkpoints or ‘flags’ that allow you to teleport around each level. You get four of these per area, and there are levels within each turf zone to complete and collect batteries, as well as cake. Candy is also used as a currency, and can be exchanged in shops for colour changes to Beebz’s hair, as well as other unlockables. 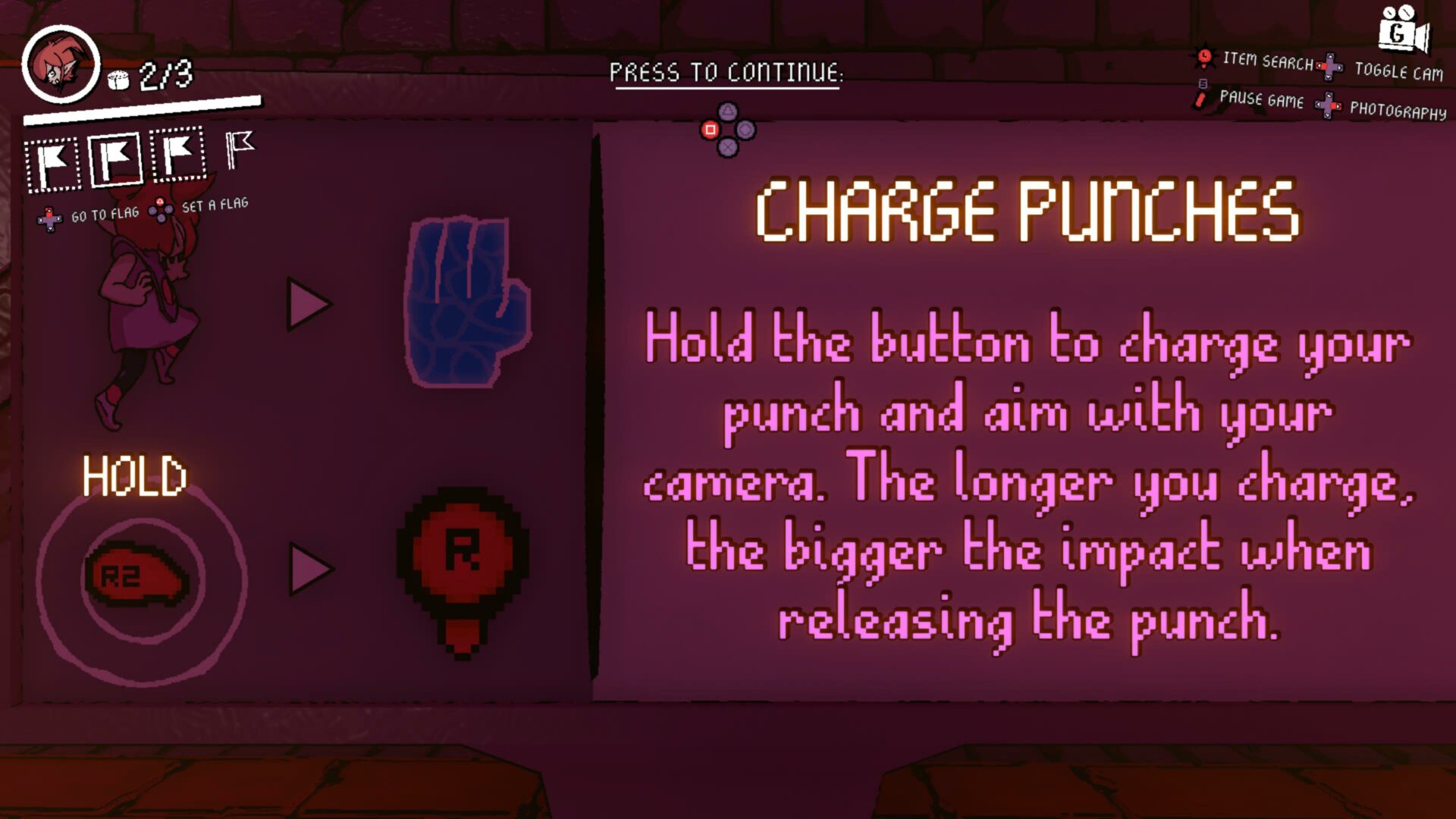 Fighting is strangely floaty, and Beebz can charge up her attack- a blue fist- to deflect projectiles, cause damage, or push enemies. As mentioned earlier, enemies can be knocked into items on the map that are bright red, killing them instantly. Movement is also allowed while charging, though this sometimes proved tricky to manage along with staying on platforms while mobs were after me. Still, I managed to die quite minimally fighting enemies, and tended to…fall to my demise far more often.

It’s also worth noting that once turfs are cleared out, they can be explored again and give all new collectables. There’s a terminal at the beginning of each area, letting you choose whether you want to run through the levels pre-boss win, or post-boss win. 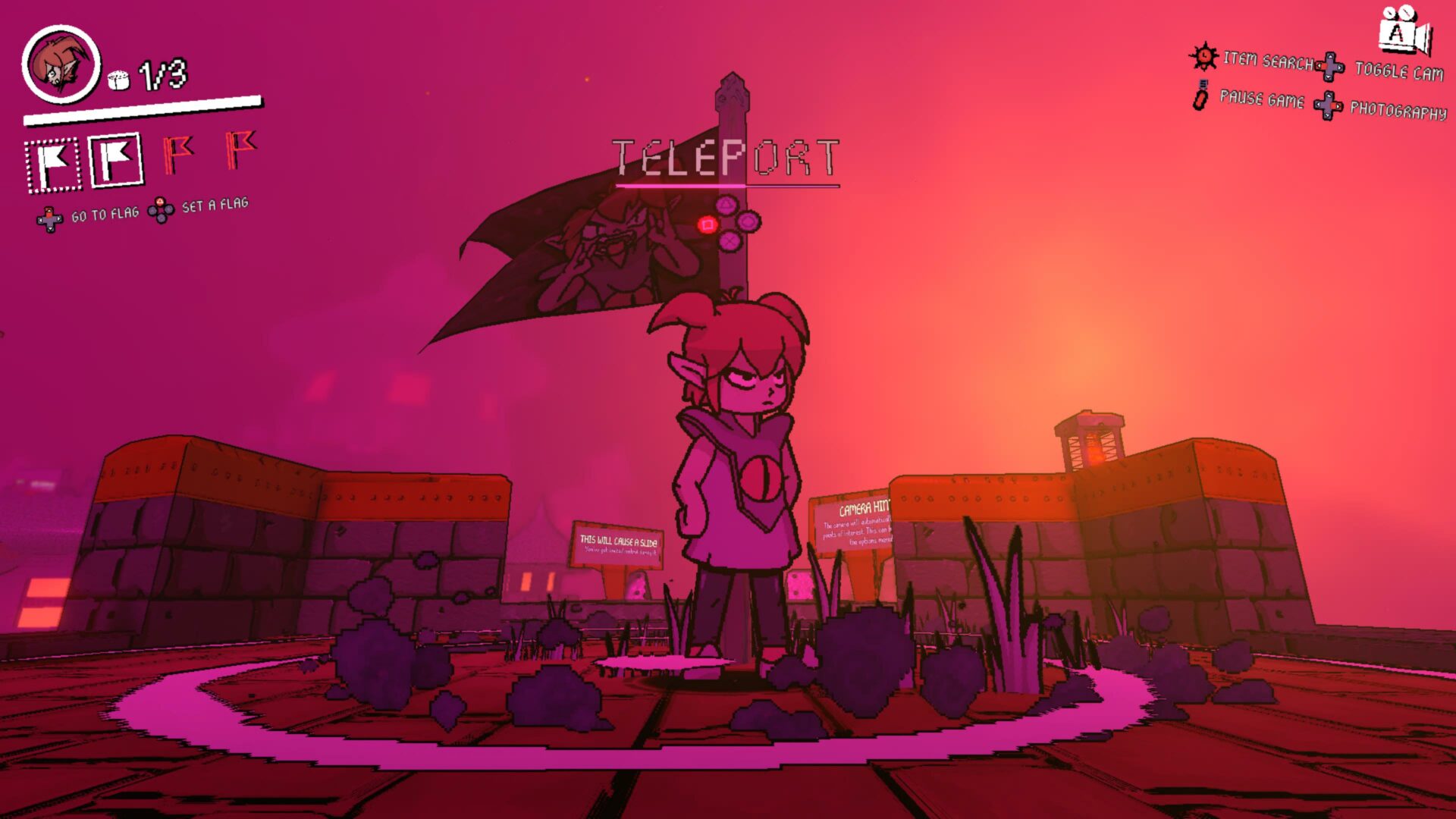 Demon Turf is a tremendously fun game, despite how difficult this genre can be for me. Beebz is chock full of personality, and strangely likable, considering she negs me every time I fall to my death. It’s clear the game was made with love for the genre, and with the additional options to play through the levels a second time, as well as the various minigames like the coliseum, soccer, photography, trophies for time to complete, and further item collecting, there’s plenty to do. If you love platformers though, I definitely recommend checking this one out.