Do you remember our venerable house, opulent and imperial? Does the sequel to the much-heralded turn-based roguelite cut the mustard or is it just a vapid cash-in? read on to find out.

Gather your courage and ride out into the chaos of a world undone.

Darkest Dungeon II is a roguelike road trip of the damned. Form a party, equip your stagecoach, and set off across a decaying landscape in a last gasp attempt to avert the apocalypse. The greatest dangers you face, however, may come from within…

Each expedition is less than 5 hours, and progress you make opens up new hero abilities, items, and stagecoach upgrades that can be used on your next journey.

Sequels are a tricky business. Especially when the first title garnered so much praise. The developers are caught between two stools. A safe bet would be an incremental update with minor changes to a winning formula. The brave option is to radically change the game flow and presentation. Red Hook has been both bold and clever in this regard.

The core turn-based battle system has been fleshed out but still retains many of the previous game’s facets. The big change is the overarching run system. Instead of doing a dungeon run and returning to a town hub. Players transverse a map of branching nodes in order to complete a story arc. This is a one-shot run with permadeath. A radical switch that might not appeal to all fans of the series. 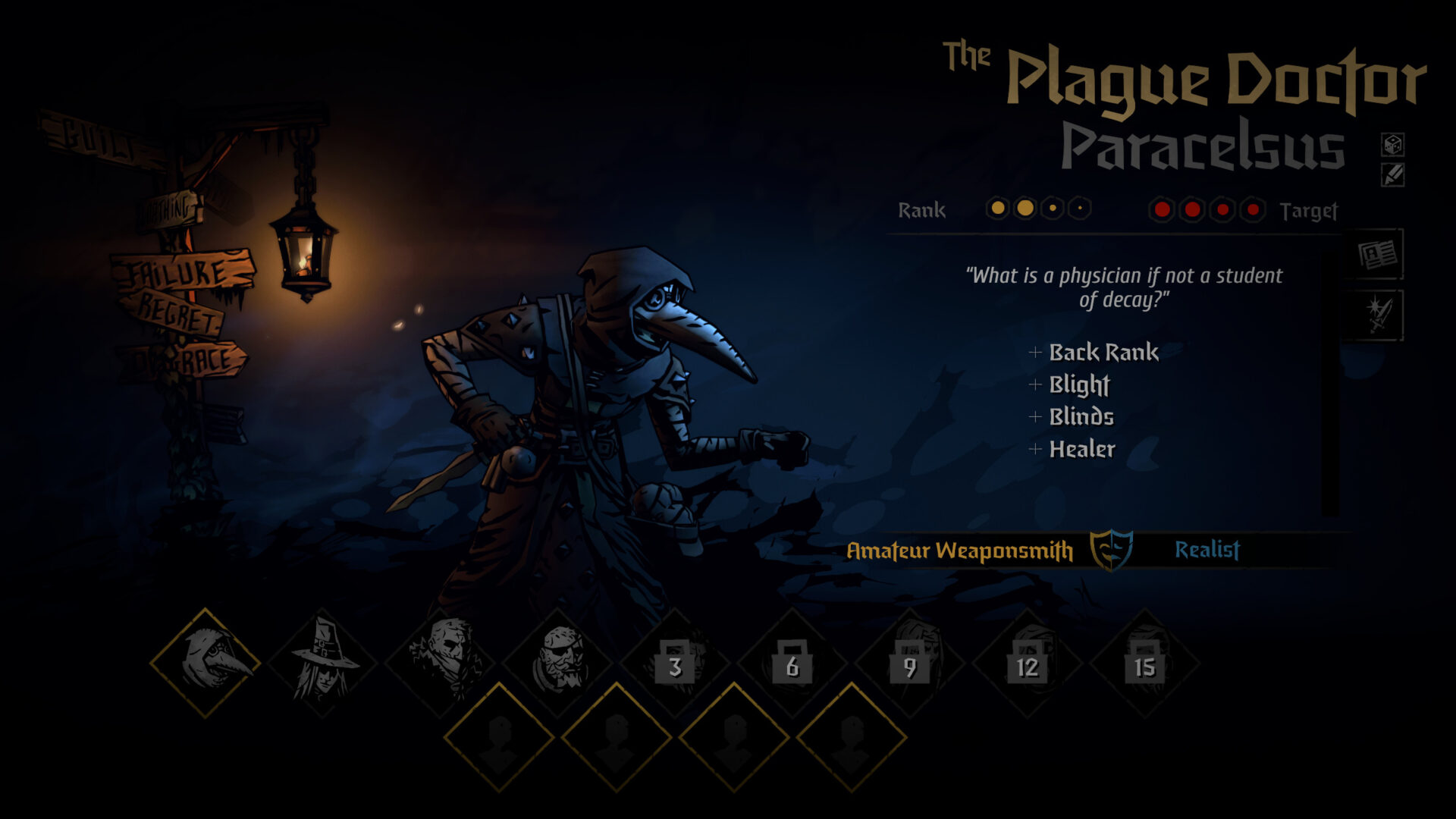 On your first run of the adventure, you have four characters to make up your team. these are The graverobber, Highwayman, Man-At-Arms, and Plague Doctor. More characters can be unlocked by levelling up your profile. For folks new to the series, higher profile levels can be accrued by collecting hope, which is earned by successful runs.

There are five extra characters in this first build include the following. Hellion (Level 3)
: Runaway (Level 6): Jester (Level 9): Leper (Level 12): Occultist (Level 15). I presume further adventurers will be added before the final retail build.

A new gameplay system has been added to the characters. Namely the affinity system. This is basically a friendly meter. Interactions on the battlefield and decisions on the road can alter this stat. To illustrate this point, on my first run, the plague doctor was continually healing my Man-At-Arms as he fended off multiple attacks on the front row. This interplay causes their affinity to level up to Hopeful. This relationship boosted some stats and their blossoming friendship also decrease their stress when they chated during battles. The flipside of this is when two characters take a dislike to each other. Their relationship can deteriorate and unearth some serious negative stats causing them to argue and bicker like squabbling children. 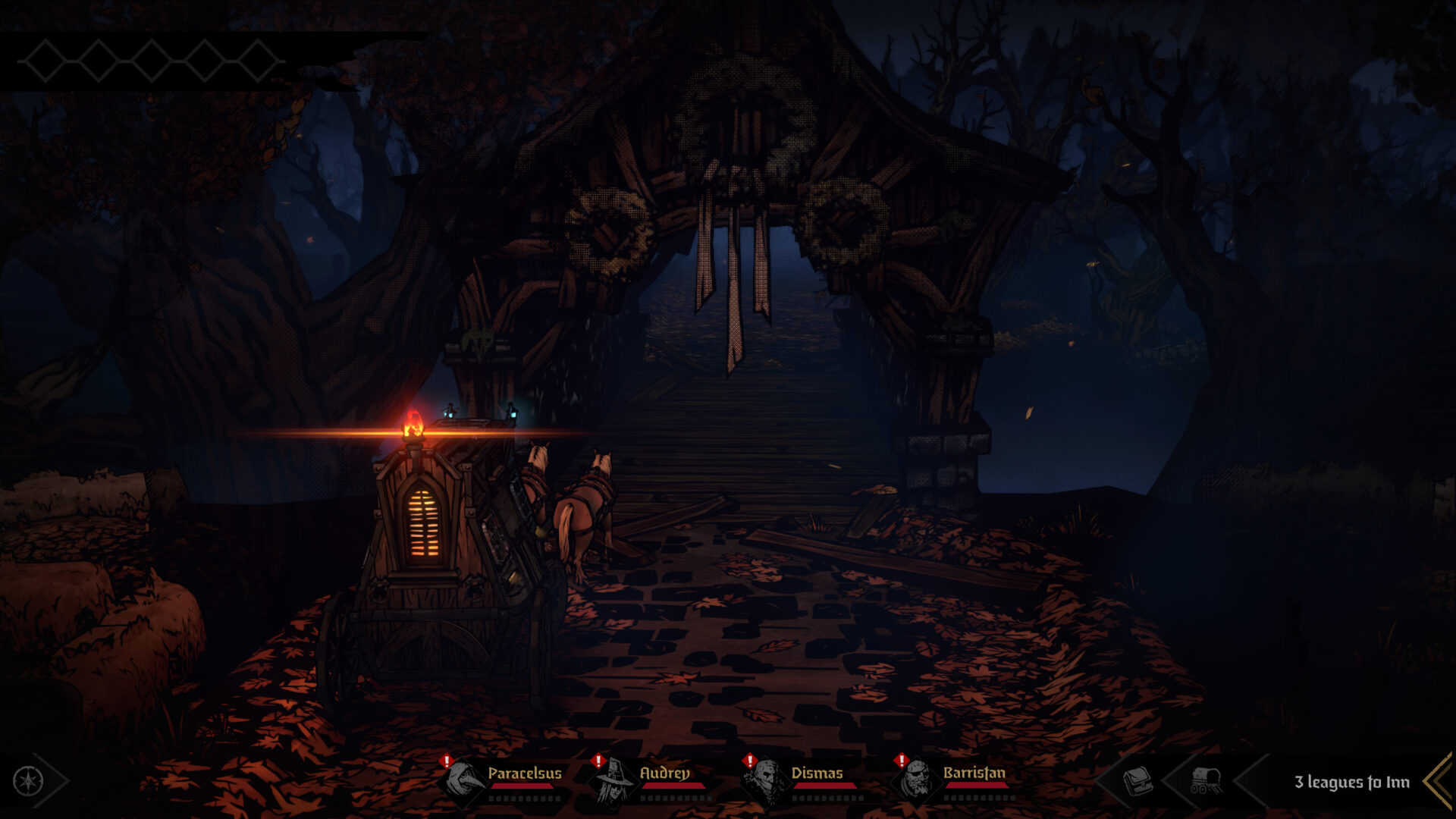 The stagecoach is your means of transport. It carries your party on a branching path of up to three lines. Along the paths are nodes that contain watchtowers, shrines of reflection and various kinds of encounters.

After the intro segment which preps your party for the road ahead, you can select one of two opening routes that have different rewards associated with their difficulty. I chose “the sprawl” area which would reward me with 250 hope points. Leaving the inn you are greeted with your stagecoach set on a 3D path. On the left of the screen is your travel map which displays all the branching paths and nodes. Some nodes contain information regarding encounters so you can pre-plan your journey to some degree. Other nodes only display a question mark. You can uncover their contents by visiting watchtowers which reveal the relevant encounter information. Forward planning and item management is key to a successful run.

Navigating between nodes is done in an endless runner like perspective, you manually control the stagecoach using the WASD keys. There appears to be no option to reverse your vehicle so bear that in mind. As you reach forks in the road, you can see the forthcoming encounter icons which are also displayed on the left side map. Your party will show their choice for the path ahead with the corresponding icon. But it is up to you to make the final decision and press on. 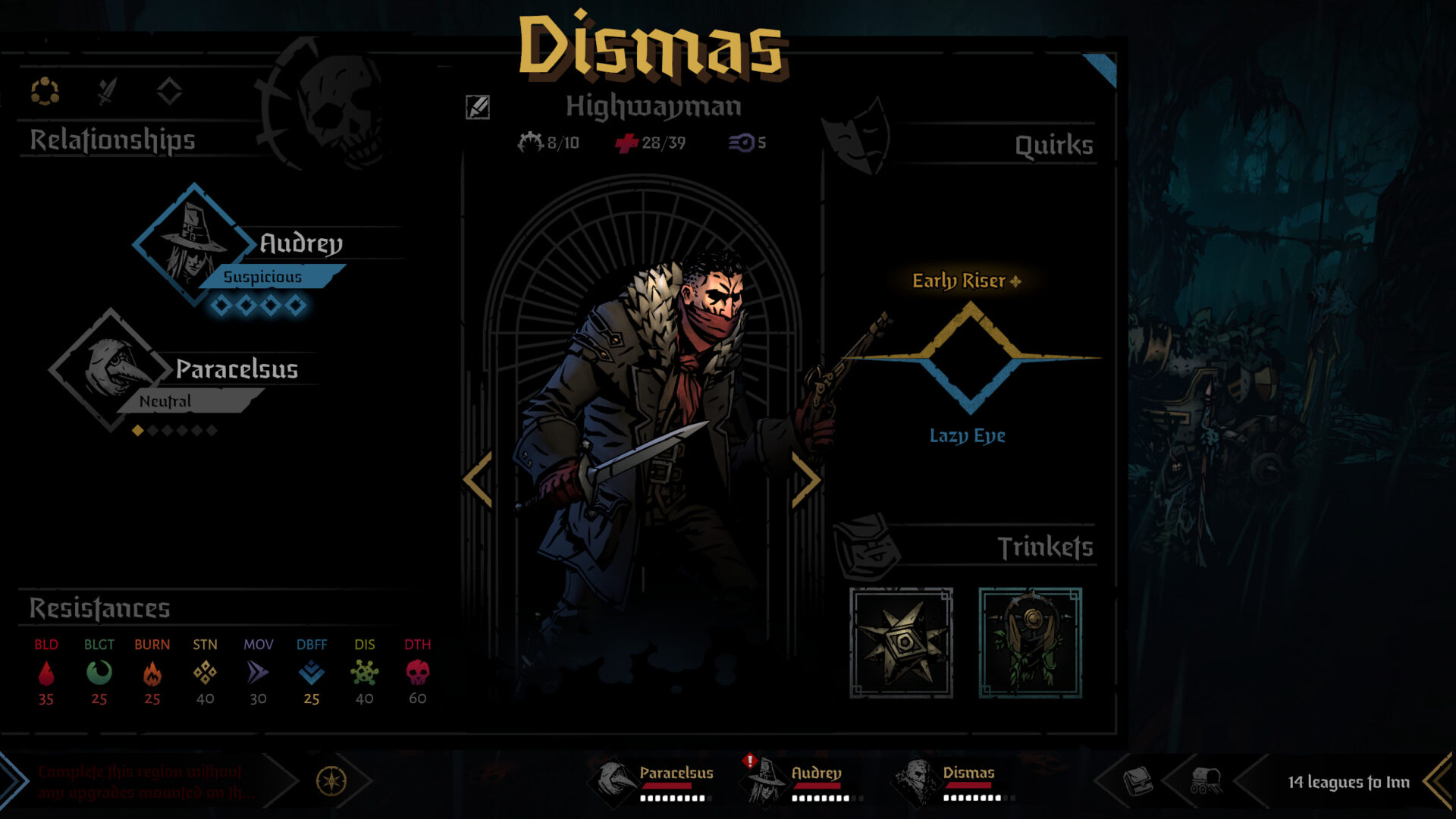 Managing the stress of your party is paramount just like in the previous game. Encounters and the heat of the battle mentally fatigue your characters. Stocking up on items such as Laudanum, which ease the pain is a vital strategy. If you don’t take care of your team’s well being and leave them to their own devices, their stress levels rocket triggering a meltdown. This not only cripples their health points but also wipes out any positive affinity relationships they had with other characters. Playing closer attention to your party state of mind is essential if you want to reach the end game above and beyond basic health statistics.

The turn-based battles play out much like the original darkest dungeon. The stress meter has been tweaked from 100 to a 10 point scale, so it is much more important to pay close attention to it mid skirmish. The affinity system also plays a prominent role as you try to wear down the opposing hoarders of undead and rapscallions. Good teamwork between characters can proc random combat buffs such as 50% extra damage next turn. These events can really swing the balance of the fight in your team favour. The difficulty curve is still brutal. On one run I lost my beloved Man-At-Arms early doors. This led to my whole team being wiped out in quick succession. Their inability to soak up damage without a tank on the front row was very palpable. 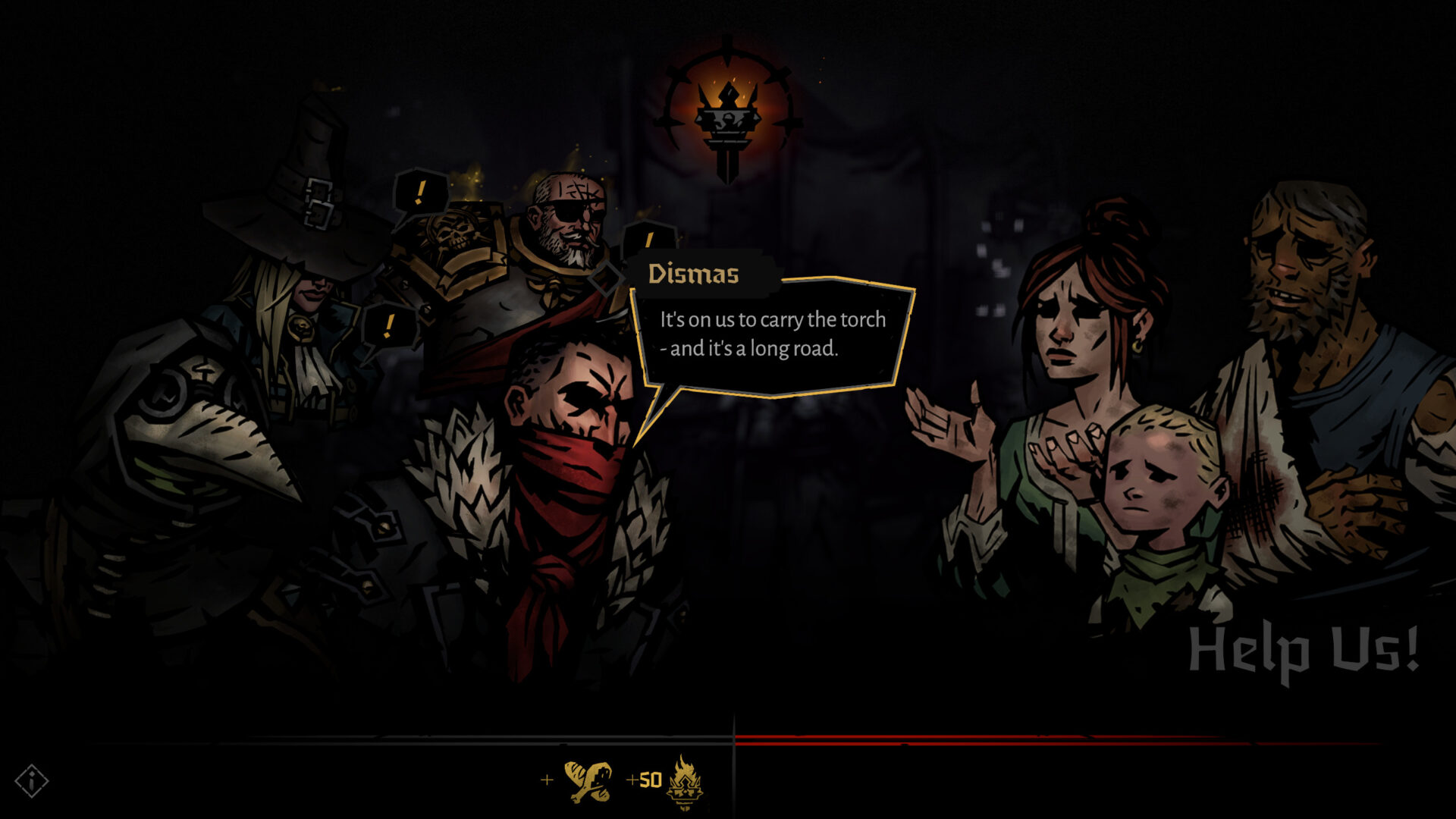 Chris Bourassa’s signature art style has made the transition from 2D to 3D remarkably well. The gothic woodcut aesthetic which made the last game so atmospheric looks great. The added dimension gives the presentation pop up book diorama feel. Subtle particle effects and volumetric fog add more drama to the otherworldly scenes. The decision to change from the initial homebrew engine to Unity looks like a wise move. The presentation looks sharper and more cinematic. 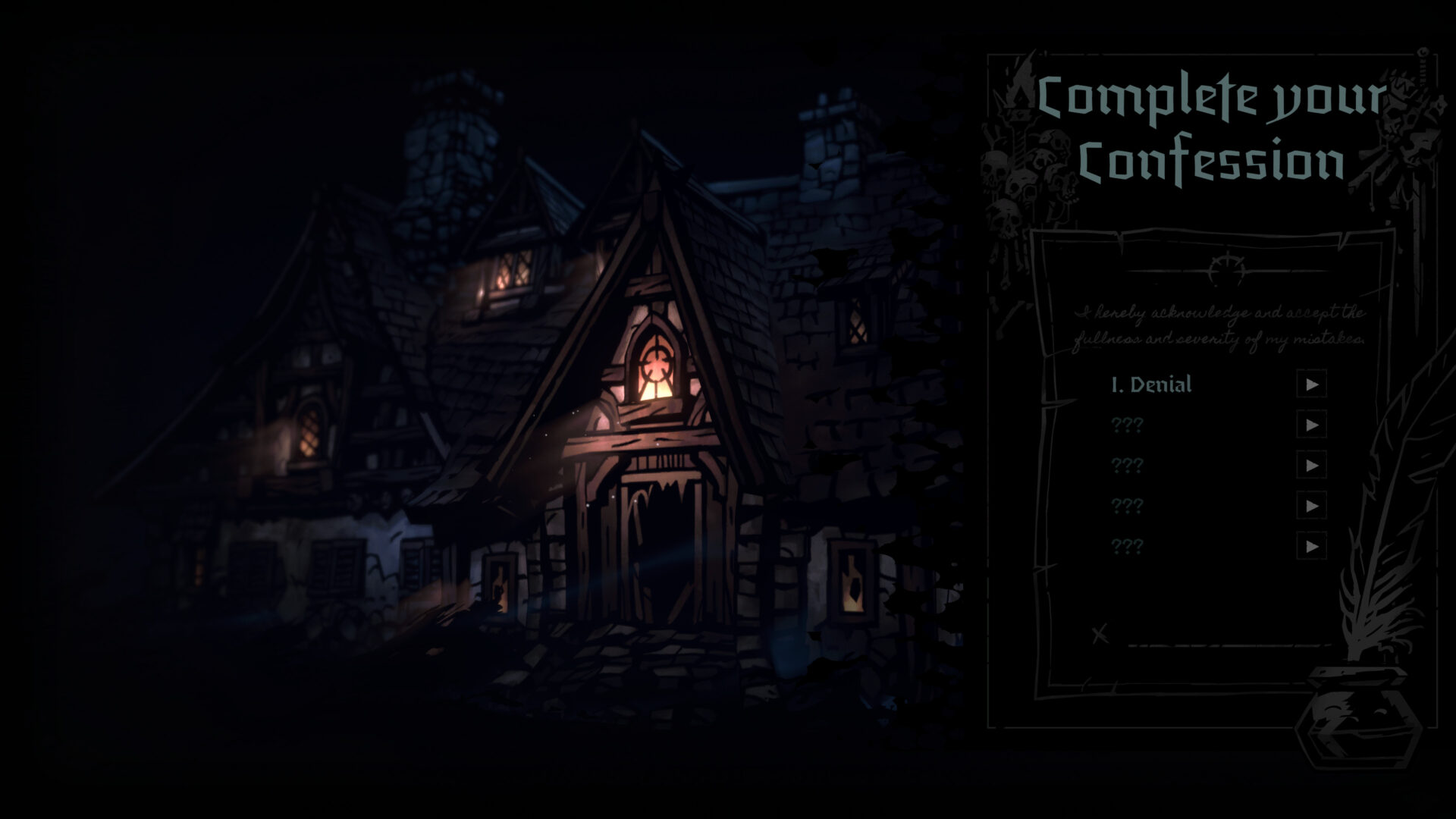 Wailing through Those Blackened Arcades of Antiquity.

I can remember vividly the first time I watched the opening trailer to the previous game. Wayne June’s narration gave me goosebumps as he delivered the ornate prose. It was his voice that compelled me to seek out the game. Some publishers think that voice work is a throwaway sheen on a project. I beg to differ on this matter. Good audio design can make a good game great. Exceptional audio design can propel a game to a whole nother level. June’s voice does this for the darkest dungeon. He captures the mood perfectly. His rich baritone incantations along with the fantastic writing really immerse the player into a gothic nightmare.

His return for this game is essential and most welcome. His presence seems more front and centre. Extra dialogue accompanies most scenes adding another layer of gloss to the proceedings. I love the added audio effects treatments given to his tones. such as a cavernous reverb and a sweeping reverse sample technique. Giving the basic speech samples a ghostly hypnotic quality 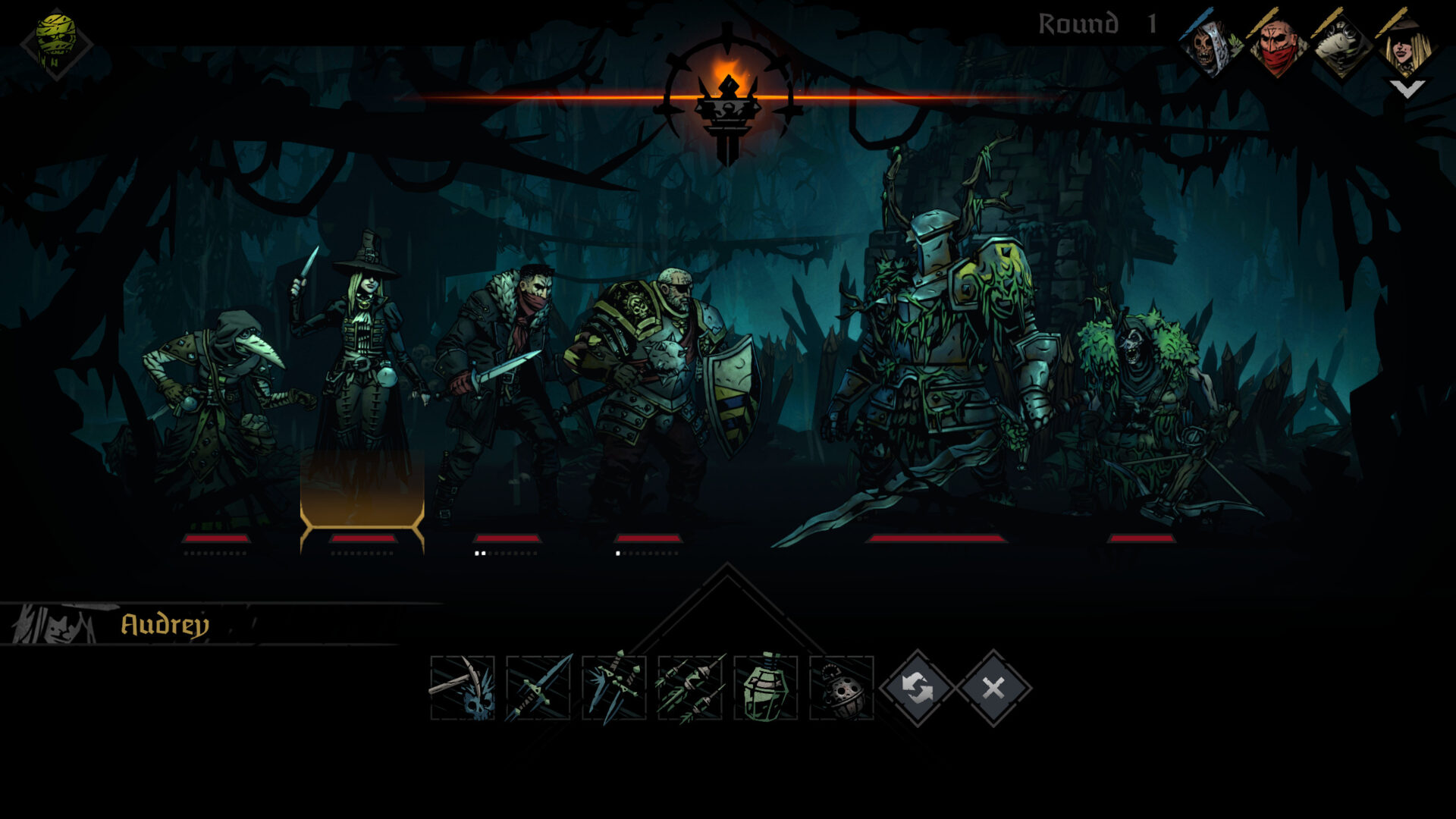 I’ve put in a few runs with this first build. I encountered no crashes or obvious bugs. The game ran fine on my modest PC system. Smooth framerate at 4k with no stuttering or hitches. admittedly the game isn’t a massive resource monster but it’s good to enjoy a smooth experience. There are a couple of caveats. I noticed a few placeholder texts in the archive which serves as the game’s build-in Wikipedia. Also, there appears to be no gamepad support, unlike the original game. The graphical options menu is fairly bare-bones with no advanced tweaking.

The epic store version comes in two flavours. A default build. Which I used as my review build. There is also an experimental build. which has the latest code updates but comes with less of a guarantee of stability. Game save data corruption is also a possibility according to the forum posts. It’s good to be given options. Knowing that the regular build is robust and isn’t gonna crash and wipe out your hard-fought progress. 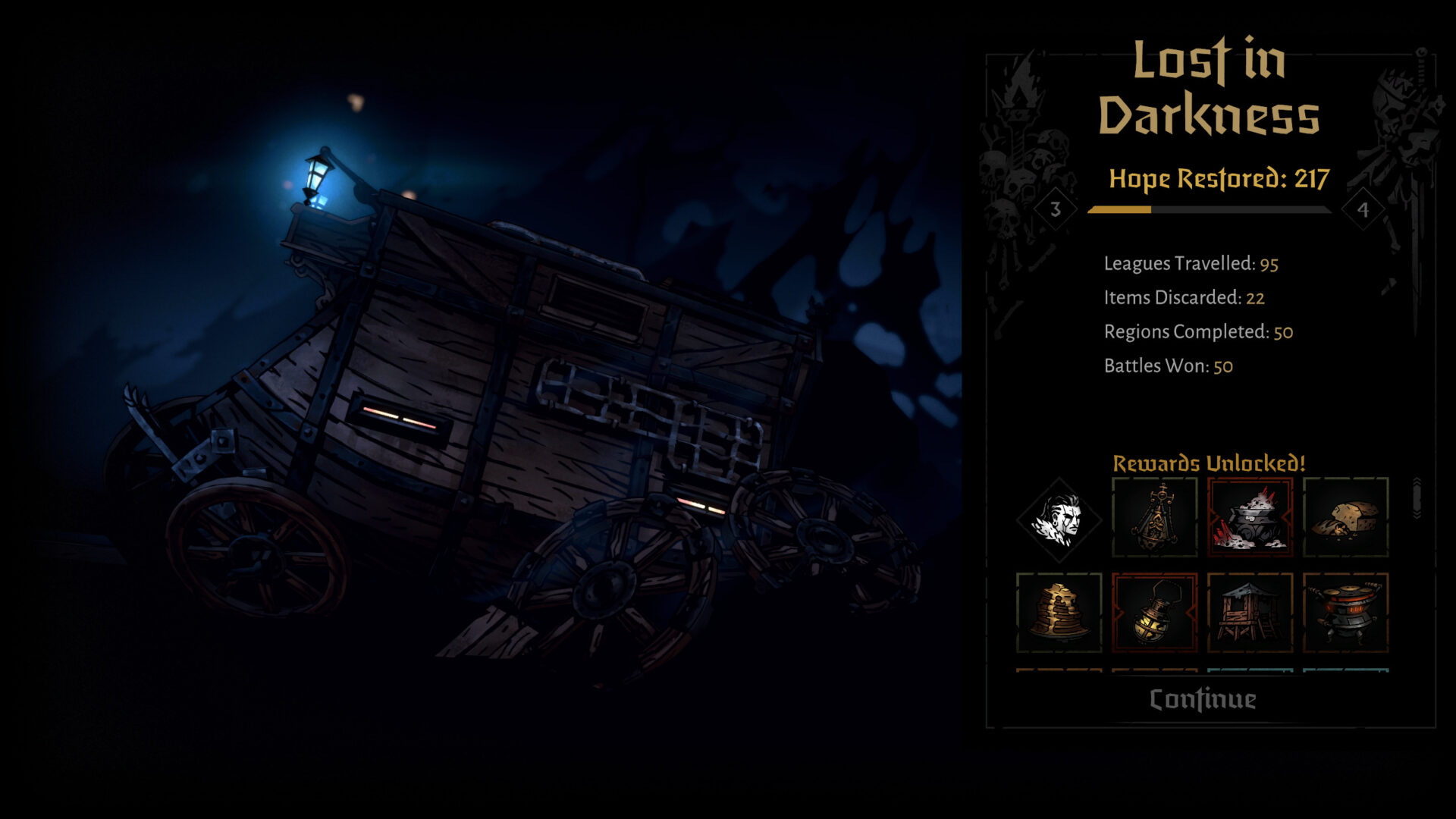 Early access releases are a delicate balancing act for indie developers, they are a fantastic way to source an early revenue stream during the difficult process of completing a project. With more eyes on the game, bugs can be squashed quicker, Gameplay tweaks can be introduced and trialled before committing to the final build. All these factors greatly help small teams in producing a polished product. For the Gamer, it’s a different kettle of fish. Jump in early and help create an experience tailored to your personal preferences. Alternatively, you can wait and enjoy the final product in its finished state.

The original game was a poster child for early access done right. A full year was spent refining the game until the proper release in 2016. Given the devs track record and now with additional hands-on-deck, I have every confidence in the team to deliver a quality sequel. Whether you pull the pin on a purchase now is down to how much you enjoyed the previous game. What’s on offer with this initial build has me excited for the final product.