As a kid, one of the few games I had before my family was able to own a NDS was Crazy Taxi. I absolutely loved the game and I remember taking any opportunity to play it. So when I heard about Taxi Chaos was heavily inspired (or a spiritual successor as the developers market it as) Crazy Taxi, I just had to try it out. Even when the trailer at the time didn’t really show off gameplay footage.

In Taxi Chaos, you’ll choose between either Vinny or Cleo as your taxi driver in New Yellow City. Vinny is a family man that takes any opportunity to talk about his kids (and even have pictures in the back seat and alludes to being a taxi driver for a while now. Cleo, meanwhile, is a social media DJ influencer who really is in the taxi driving business until it takes off enough. Your driver doesn’t really change anything other than the lines that they’ll say. That is dedicated to what taxi you pick out. You start off with the basic taxi and you have to do things like getting a certain score, delivering a specific number of passengers, playing Arcade Mode, driving a long 200 miles, and gathering over half of the available collectibles. Each taxi will have different stats in how fast the top Speed will be, how fast its Acceleration is, how quick it Breaks (I’m guessing), Weight, and Boosting power.

There are three different which are all pretty much the same: Arcade Mode, which is where you have a game timer that you have to constantly add time to, Pro mode that gets unlocked after getting a high overall star rating in Arcade Mode and just takes away the guiding arrow, and Freeroam where you have no overall game timer so you can drive as long as you want and only passengers have timers. Either way, you’ll be picking up passengers and driving to the destination as fast as you can, through a not so chaotic NYC.

Each passenger has a pickup circle, where its pretty strict that your driver needs to be in it to pick them up, with them having two symbols meant to give you some quick information on their request. They all have a little location icon and a clock icon above them that you can see as you get closer. The location icon is to tell you how far it will be (from the closest being blue and the farthest being red), but the clock symbol was a mystery. I did some testing as my initial thought that it gave you more leeway with the passenger timer, but it more seems like it gives you more added time if you go past a three star rating. And weirdly enough, the red clock may give you more added time. 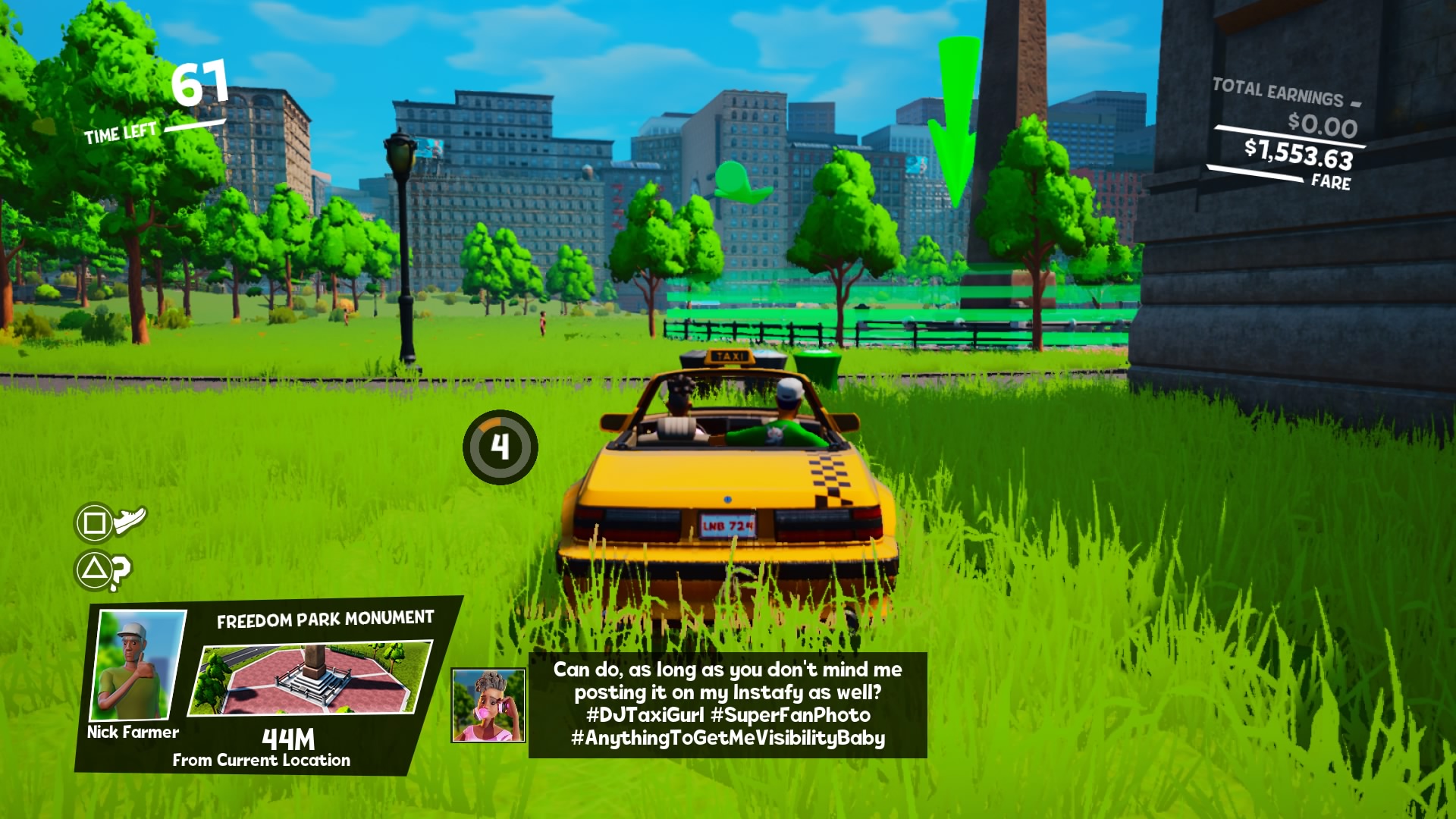 Anyway, once you pick up your passenger, you’ll be given a destination, at max 10 seconds added to your game time, and a passenger timer. You have to navigate around NYC to the destination before the passenger timer runs out while aiming to get a high rating score. You can perform a starting boost, which you can start when the passenger is getting into the taxi, to get a quick start at the beginning. To get a high rating, it seems like it’s a mix of how quickly you got there and your combo. There’s not much to raise your combo, as boosting, jumping (just jumping, not based on how many cars you jumped over), the unreliable near-miss, and taking a shortcut (basically passing through sections not designated as a road) will raise it, with crashing bringing it back down to zero. If you manage to make it to the destination in time, you’ll get a star rating, out of five, and get some more game time added.

There are also a couple of Special Passengers that hold a quick story to go with them. They pretty much look like any other passenger, but you can either tell by writing the names all down or when they start their unique conversation. Once you drop them off, you’ll be tasked with finding their related collectible, which will have a blue glowing aura that you can notice when driving, and after three will be asked to pick them up again, and once you deliver them then be able to get the last two collectibles tied to them.

Once the game timer reaches zero, the game will stop and you’ll get an overview on how much money you earned, your overall star rating, and a look at the leaderboards (which only tracks how much you earned). 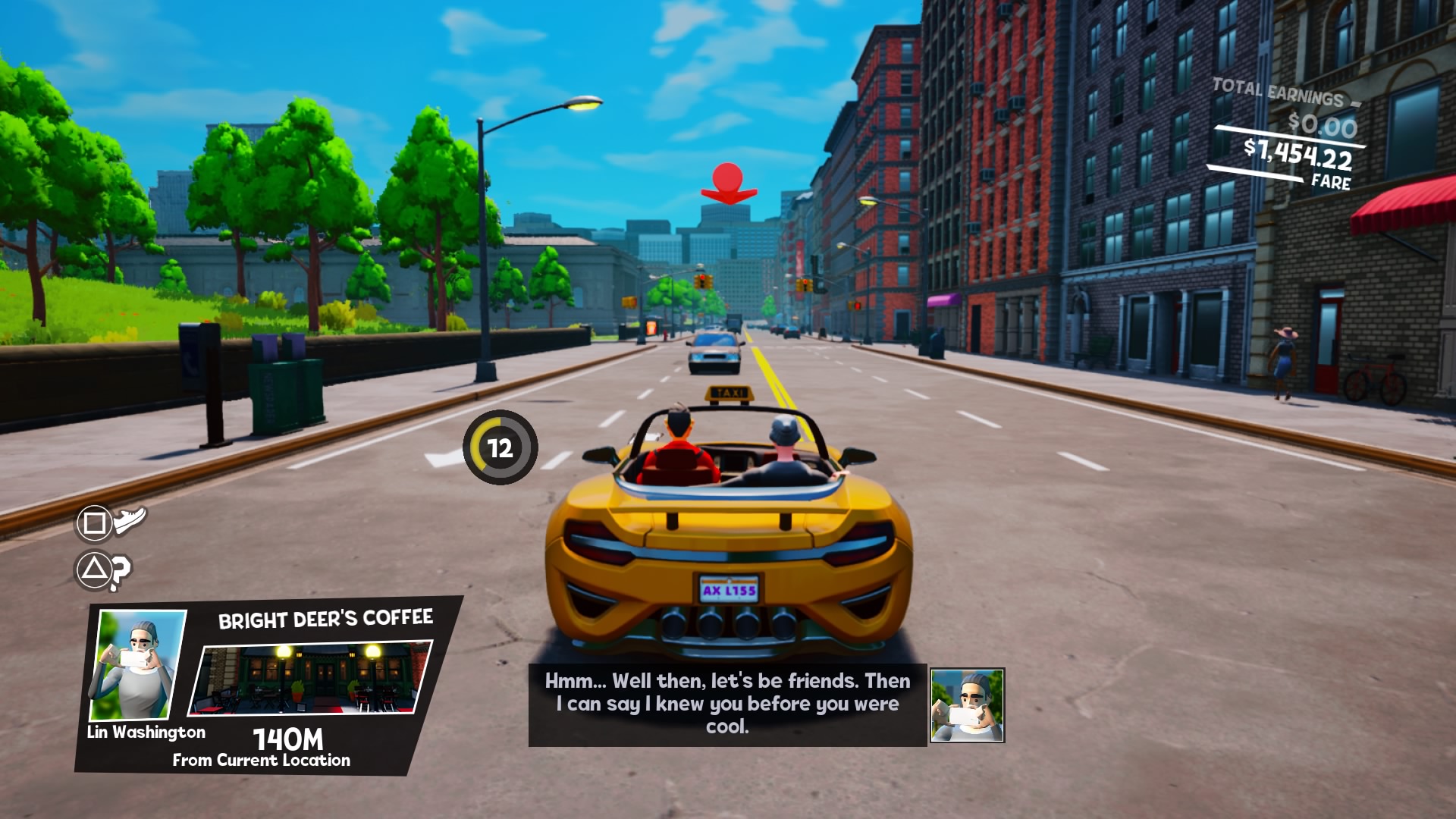 The thing is with Taxi Chaos… the map is just bland, flat, and boring. There are a couple artificial ramps that you can jump off of and some buildings are small enough for you to jump on so you can take shortcuts. And I did find it effective to use the jump on corners or over traffic. However, there’s no real push to try to memorize the map or anything interesting so you’ll learn it without even realizing it (like in Crazy Taxi). It’s also not as chaotic as the title suggests, as it doesn’t come from the soundtrack, none of the taxis go as fast, and the traffic isn’t there until a whole clump of cars suddenly pops up. Not to mention there are at least two invisible barriers on the map, which is explained away at it being in construction, but at the same time, this is a $30 game. At the bare minimum, I expect the map to not have invisible barriers, especially when it does a good job at looping you around in the first place. I thought it was a section you could drive through and, when I was abruptly stopped, thought it was just the jumping mechanic being wonky before I realized what it actually was. Not even Crazy Taxi had invisible barriers in the city.

Taxi Chaos also somehow messed with the audio mixing as the music will easily overpower the driver and passenger, along with the disembodied voice at the beginning telling you what the mode is being unusually low. Unless you turn it down to around 40%, you’ll struggle to hear what’s being said or have to risk looking down to the subtitles. However, this is seems to be a blessing in disguise.

The passengers here will try to make conversation with you other than simply telling you where they want to go and a few quips, as well as the driver you picked saying their catch phrases every so often. At first, it is annoying that the music overpowers the lines since I wanted to know what they were saying, but once you reach a certain threshold, you most likely won’t want to hear them again. They get annoying fast and you just want everyone to stop talking. I can’t tell you how many times I heard that a passenger was going to an Illuminati meeting, aliens, Wall Street/stock market, not liking something now that their taxi driver knows about it too, Cleo’s hashtagging and pushing her social media, a “this is a reference-free vehicle, keep your jokes fresh” when the passenger didn’t joke, and comments about the terrible traffic… when there isn’t traffic. The only unique dialogue you’ll get is through the Special Passengers, which are rare.

We all know that sometimes our childhood memory of a game or show is often better than what it actually was, and since Taxi Chaos is inspired by Crazy Taxi I wanted to compare them somewhere in my review. After all, this is supposed to be inspired from it while modernizing and improving. I still remember having a lot of fun playing Crazy Taxi as a kid, but I had a nagging voice in the back of my head wondering if it would be good enough. Well, good thing is that the original Crazy Taxi, the one I played the hell out of as a kid, was re-released. So, I went and bought PS Now just for Crazy Taxi and while the iconic soundtrack had to be replaced due to licensing, I still had a ton of fun with it and learning (well, still learning) all the Crazy Skills the game had so you can make it to the destination faster. At first, it doesn’t make sense why you have specific buttons to go into drive and reverse, but the skills takes advantage with this like the going from reverse to drive quickly will give you a Crazy Dash/Boost and you can stop quicker by braking and putting your taxi in reverse (Crazy Stop). Not to mention that it still lives up to the crazy name as your dodging traffic, flying high, and listening to the new soundtrack (which isn’t as bad as what I imagined from what others were saying on forums and only had one song I felt was out of place). 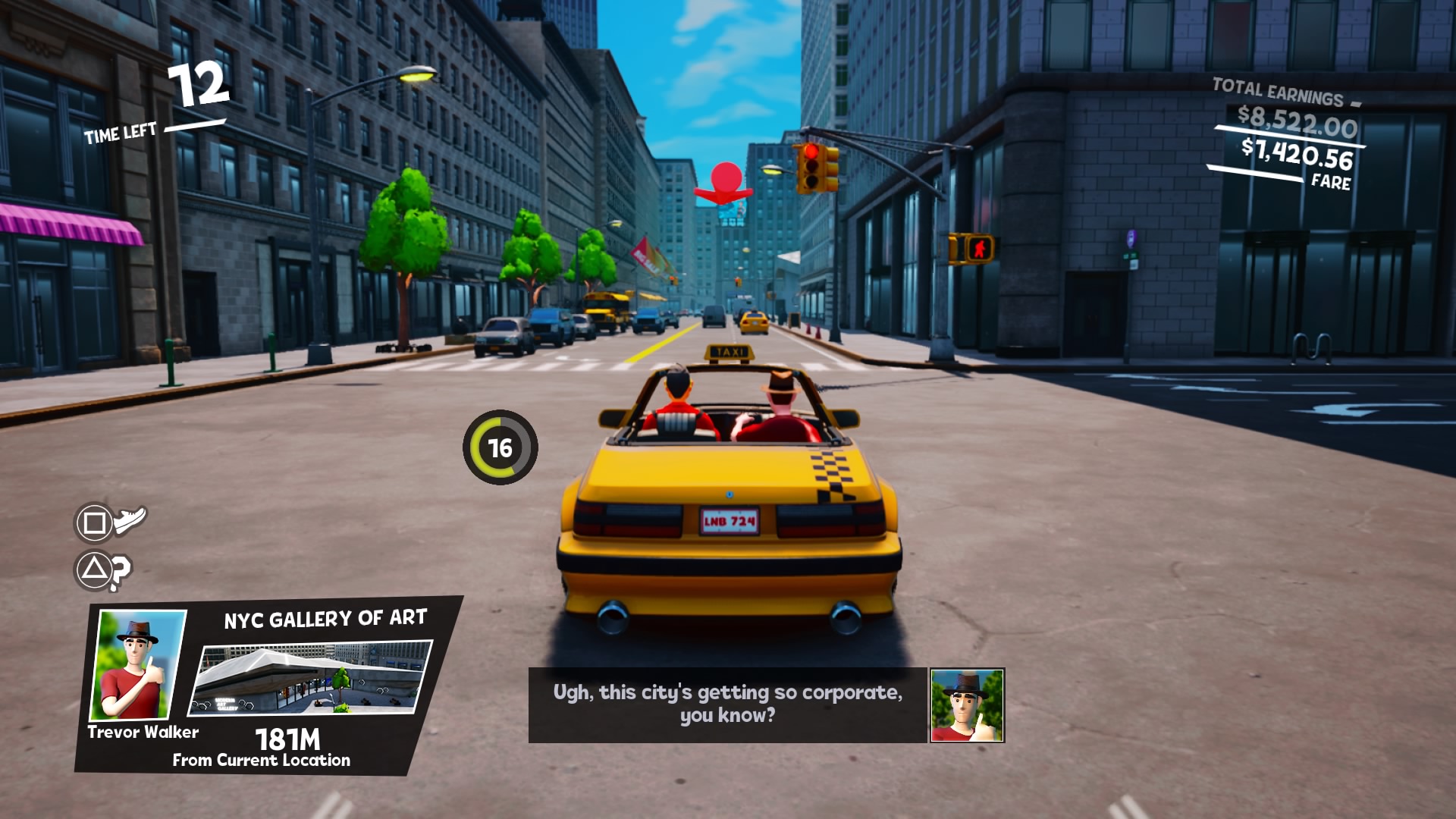 I will say that Taxi Chaos does make improvements as it makes it easy to do a starting boost, turning while at a standstill, adding time after dropping off a passenger no matter what, the ability to kick out passengers (though this will take away game time), and driving with the stick feels better as it’s not as sensitive, but that’s all. Crazy Taxi does also have the music overpowering the voice acting (though, I don’t remember if it was originally like this or if it’s just the re-release), but at the same time, passengers in Crazy Taxi don’t attempt make conversation. However, Taxi Chaos does do worse in some aspects, like the boost is the only skill, you’ll often start going in reverse when you’re trying to stop, jumping is a bit wonky at times, near-miss combo is unreliable, it’s not as lenient with how much your taxi needs to be in the pick up/drop off circle, for some reason have invisible barriers, and just my personal preference that I prefer the game time at least equaling the passenger timer.

The only bugs I ran into was the one time I had 14 seconds on the clock after dropping off a passenger, but yet the game registered it as 0 and cars spawning under other cars (which is kinda funny as you see the car already there suddenly jump up as you pass). There also seems to be aspects not working correctly, which I only found out by watching a tips video curious to see if there was some hidden techniques (there wasn’t). Apparently, you’re supposed to be fined $50 when hitting a cop car, but it’s set as $250, as well as the combo for driving at a high speed never getting prompted (even when driving the fasted taxi). 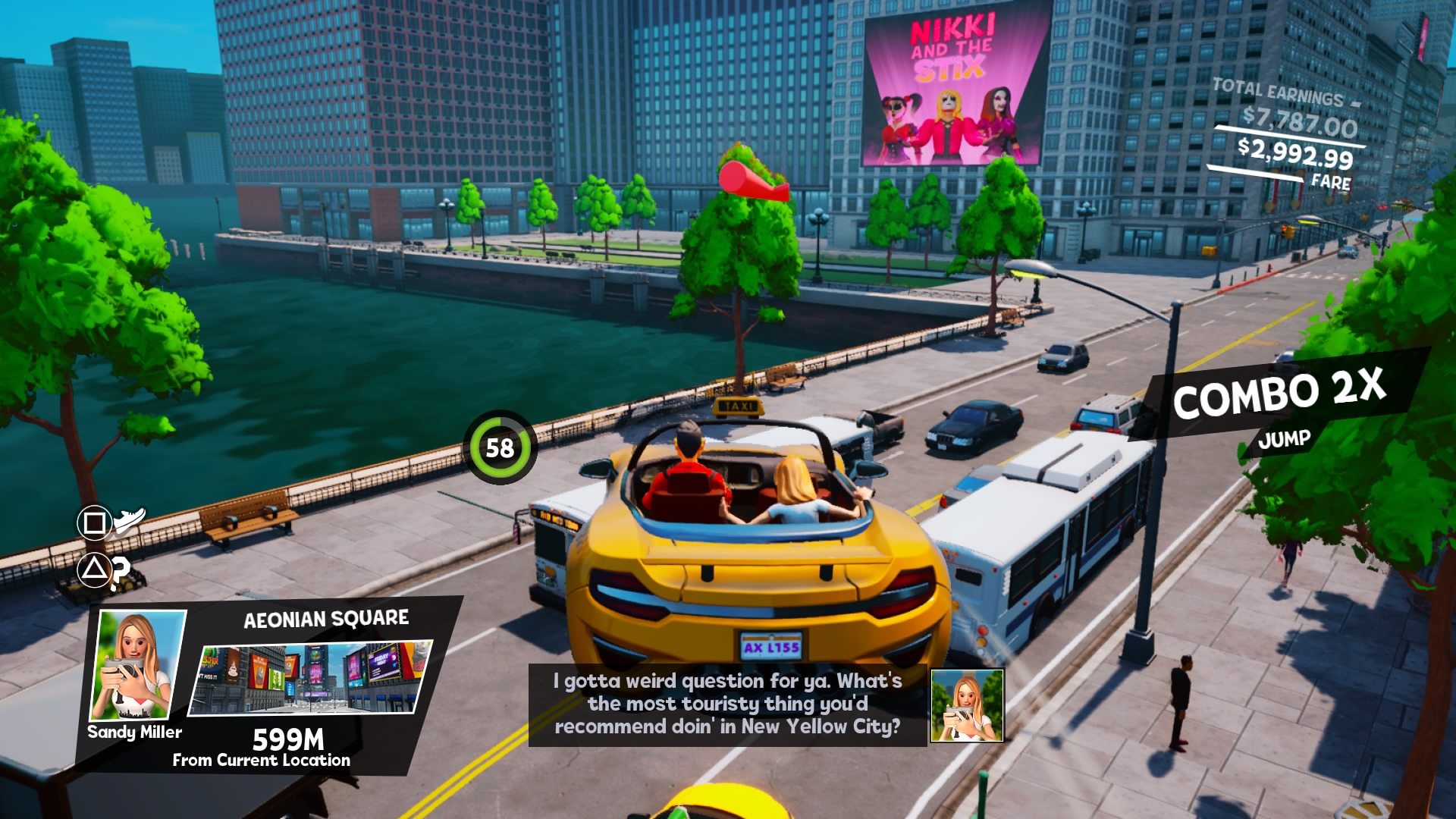 I’m sorry Crazy Taxi fans, but I can’t recommend Taxi Chaos. While there is a nugget of fun here, it just doesn’t carry any charm, it’s pretty bland, and there’s not really that much content to justify the $30 asking price. For that price, I expected more and I was disappointed. At most, wait for a sale unless you really have cash to spend and don’t mind how bland this game is. For now though, I recommend just picking up PS Now and playing the original Crazy Taxi through it (or going through Steam/emulating it) or even find a way to play the Crazy Taxi sequels, as jumping was added starting at Crazy Taxi 2 along with other improvements.