The long-awaited sequel to the best tactics game out there is here. Is it a mission cleared or a hostage situation gone bad? Read on to find out

Door Kickers 2: Task Force North, the sequel to the best* tactics games of 2014, is a top-down strategy and tactics game about controlling Military Special Operation Soldiers in daring raids to capture or eliminate terrorists and dismantle a fictional terrorist network.

Building upon the gameplay formula established with the original release, the game ups the challenge with suicide bombers, RPG-toting insurgents and smarter and more believable bad guys. But up goes the player capability too, thanks to the new engine built in-house – walls can be breached to come in from unexpected directions, windows can be broken and climbed. Light machine guns will suppress the enemy while grenade launchers and Designated Marksmen provide pin-point firepower where needed.

KillHouse games burst onto the scene back in 2014. They scored a breakout hit with their very first game entitled Doorkickers, which went onto sell over a million copies. This highly regarded game made the developers a team to be championed in the strategy genre space.

Fast forward to the tail end of 2020 and with little fanfare or PR build up, A sequel has been released into early access. Does it live up to the hype? Can it match the original in terms of features and game mechanics? Read on to find out. 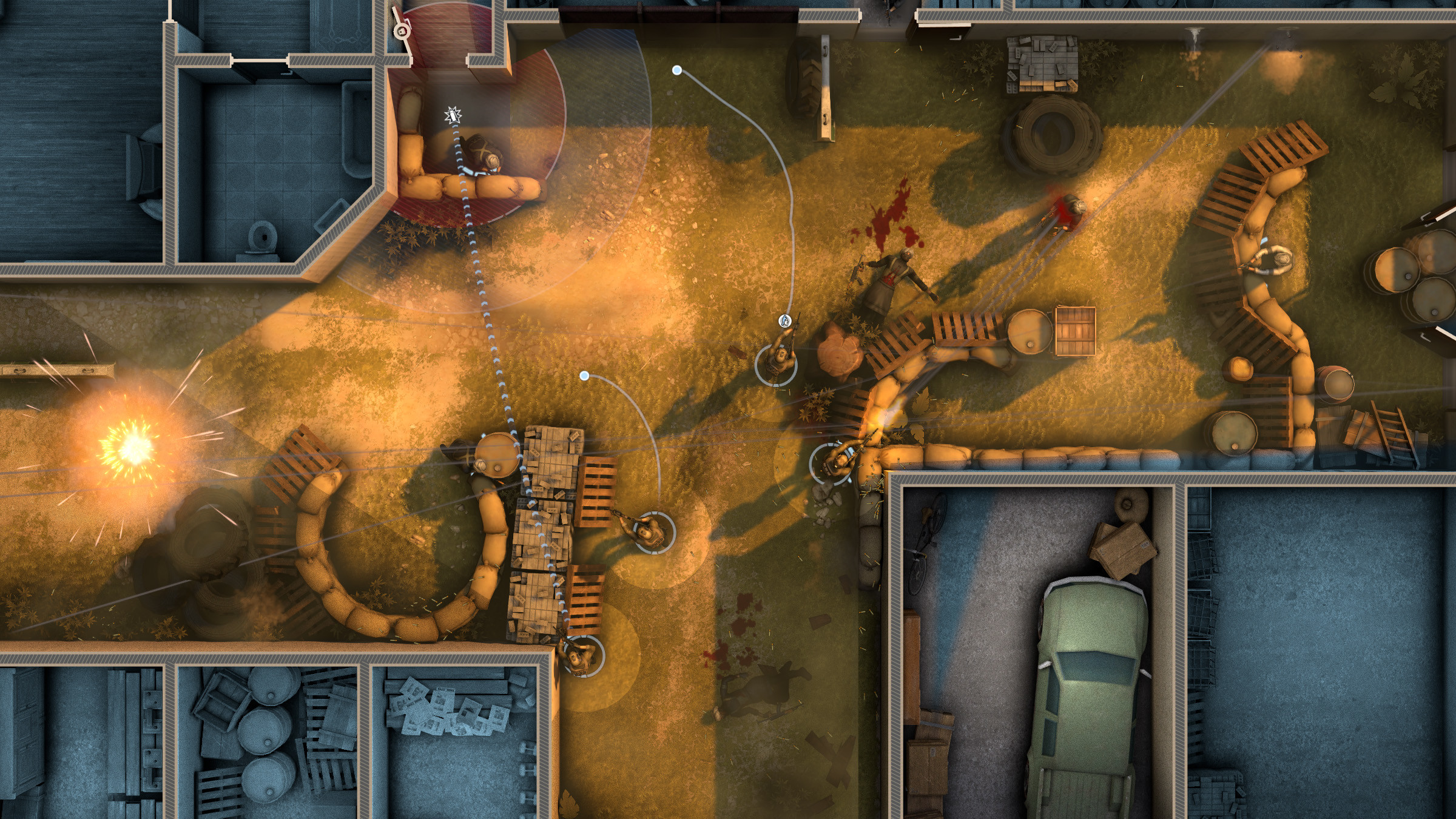 Given the scant press pre-release information I was a little reticent about the current state of the game. My fears were soon eased once I booted up the early access build and played a few missions. The classic gameplay from the original game is intact and just as compelling as ever.

The current EA build offers 25 handcrafted single missions split into chapters. These can be played solo or with 2-4 players in Co-op mode. In this follow up game you have been tasked to coordinate and control a Special operations unit deployed in a fictional country of Nowheraki, situated somewhere in the Middle East. the theatre of engagement may have changed but the basic premise is consistent.

Missions come in various flavours, from the basic kill every last motherf*cker in the room, to the more complex and demanding. Hostage missions have several levels of difficulty. These start with simple extraction requirements, right up to execution timer situations. These later operations will test your squad’s abilities to the maximum. Every step has to be by the numbers and on point. A 15-second window leaves no margin for error unless you want your soft package’s final moments to be transmitted to the world, via some grizzly viral video.

For folks new to the series, DK2 does away with the usual turned based system used by many strategy games. There are no action points to contend with either. The world plays out in real-time but you are free to stop the clock and alter your plans on the fly. This is much akin to the system used by Obsidian in their Pillars RPG’s. Careful planning and reacting to changing events is key to a successful mission.

The pathing system seems a lot more fluid than before. The ability to fine-tune every step is very gratifying. Adding waypoints and syncing squads with go codes is a breeze to set up. This is a refinement not a revolution of the original systems. 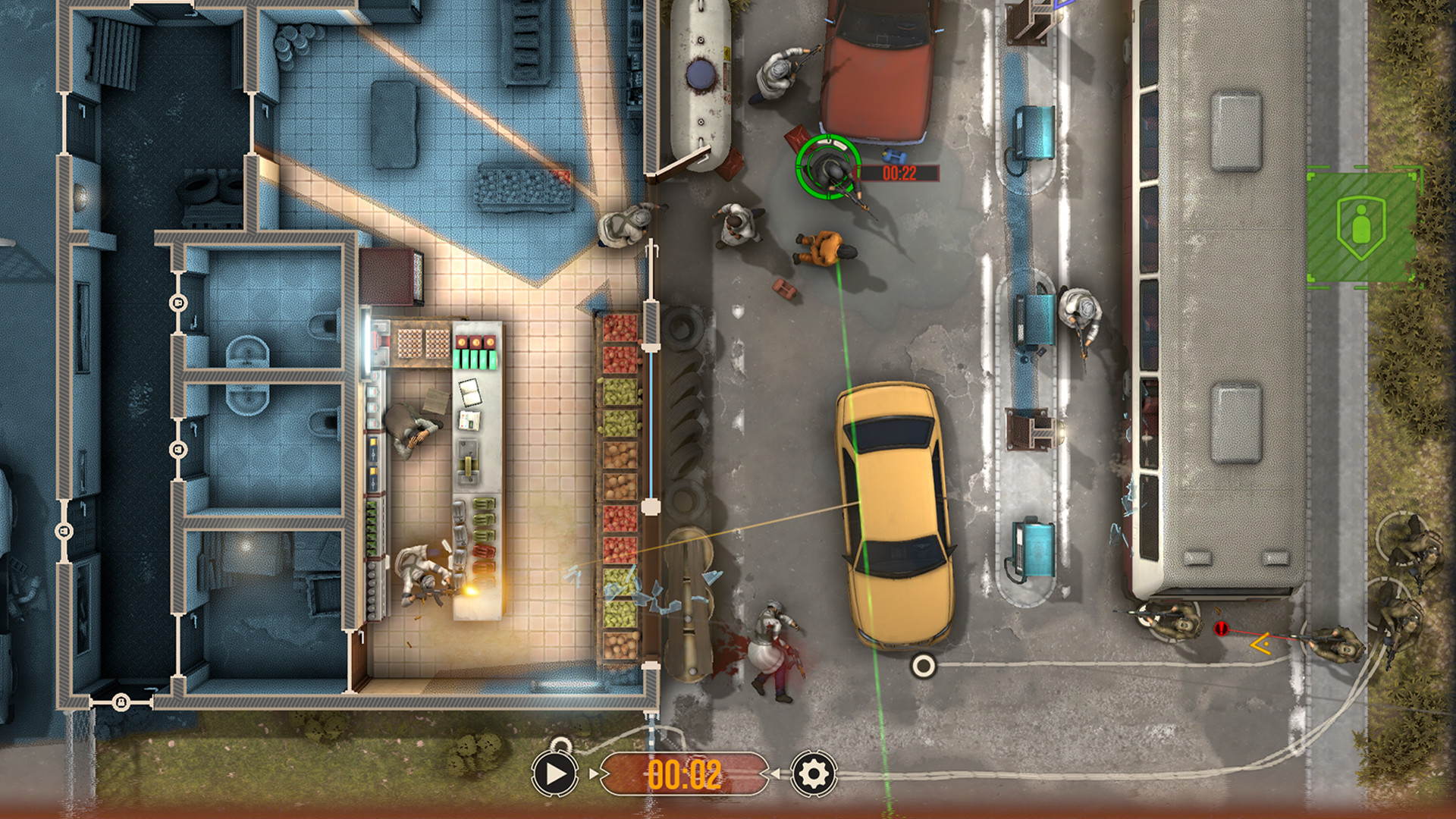 Your designated team gains experience in every sortie. This enhances their particular skill set according to their combat class. For example, Assault troops become more proficient in marksmanship, assault shooting(aiming speed) and field skills. The latter increase their speed when performing such tasks as lock picking, priming explosives and crow barbering access points. Each mission has three-star points. By completing various objectives, these can be accrued and then used to unlock a whole host of new weapons, mods and battlefield tech.

The one-piece of kit that shone out for me was the breaching charge. This was present in the original title, but only to blast doors. Killhouse has taken a leaf out the rainbow six siege playbook and added the ability to breach walls. This fundamentally alters the game in terms of tactics. You can now completely bypass a heavy guarded courtyard and blast through perimeter walls, gaining quick access to soft packages and tangos. Given the amount of real estate in every mission, this opens up a whole new level of strategy. Countless new routes can now be implemented in order to reach mission objects in a slicker, more time-efficient manner. It’s a game-changer.

The current roster of troops is made up from the United States Army Rangers. These comprise assault, support(heavy gunners), snipers and grenadiers. According to the devs roadmap, more units will be added to the pool in the upcoming patches. These will have their own distinct playing style and new abilities. 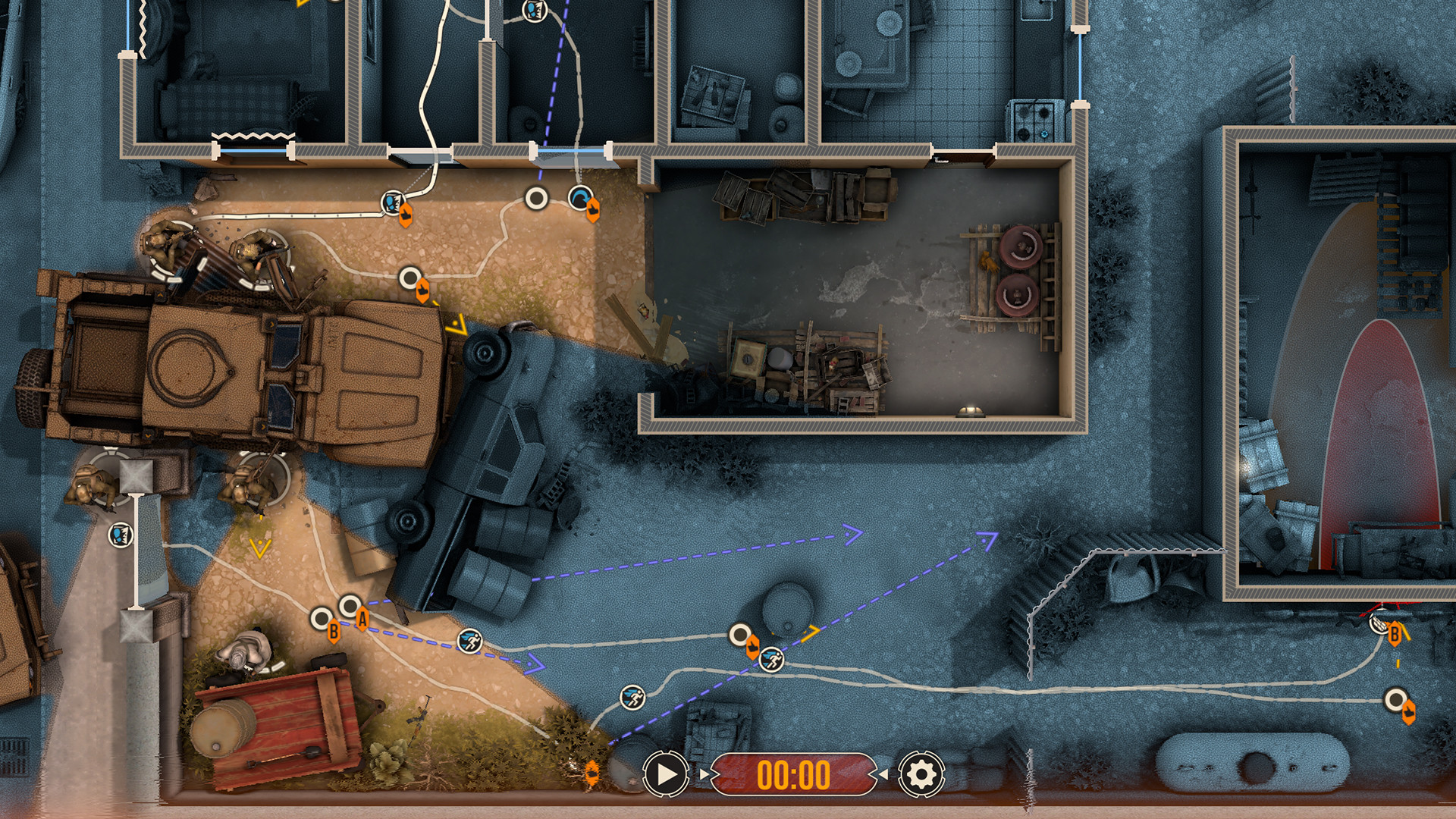 Got Eyes on a Hot Target.

I’ve played a fair few EA games that have had no end of graphical glitches and even placeholder assets right up to the point release candidate. DK2 puts these titles to shame with its fidelity and general polish in terms of presentation of the main gameplay experience. For me, the top-down 2D playfield is virtually feature complete. The upgraded bespoke engine has certainly come a long way. The level of detail has been ramped up from the previous title. Character models are more defined and the basic animation rigs look a lot more life-like. The level designs are far more expansive and are decorated with a great deal of modern-day clutter. Thes gives the whole experience a far more believable real-world setting.

The user interface is workmanlike but in need of tweaking. Various options such as loadouts are not as clearly marked as in the original game. Folks new to the series might not realise you can change loadouts for individual squad members. Especially as the icon is not really highlighted. Obviously, this setup is probably an early prototype and will be polished at a later date. It’s not a mission-critical issue. The UI is not fundamentally broken. It just needs finessing.

Included with the base game is the new mission editor. This appears to be the dev tool that was used to create all the current content. A popup note announces that this is not the final build and merely a tool for the fanbase to get started and acquainted with all the new feature sets. Even in this state is it eminently usable. I am a complete newbie in regards to designing levels. The interface is very friendly and intuitive. In just a few minutes I was able to customise one of the host maps. Adding various textures and prefab objects into the mix. Dragging and dropping assets was a breeze. Anybody with any previous knowledge of unity, blender or unreal applications will feel right at home. There’s nothing unwieldy or obtuse in the interface.

Killhouse has stated that their priority is first map support via steam workshop integration. Mod support will come in phase two after the work on the game engine has been completed. This is a wise move. There’s no point adding mod support till the code base has been finalised. This would be a waste of time for users creating custom content that relies on a stable and consistent platform.

Online Co-op appears to be embedded in the DNA of the game from the design phase. I hosted an online session with my fellow writer Hotshot. We have some fun trialling some of the missions. At present, there are two options either real-time or sync. The latter worked well as both players can pause the action at any time. This is vital for CQC as the battlefield situation can change in an instant. This worked seamlessly. I like the ability to use the right-click option to draw on the screen much like a football pundit, to easily highlight bad guys, choke points and various tactics in a quick efficient visual form.

This mode has bags of potential. It’s a little bare-bones currently. The option to add maps lists and filter missions via objectives and squad size would be most welcome. I presume this will all come in time as getting the content package fixed is probably a more pressing target as this moment. Regardless of this, the co-op mode functions well. During my play session there was no latency and adding friends was a breeze. The Steam online integration just works. 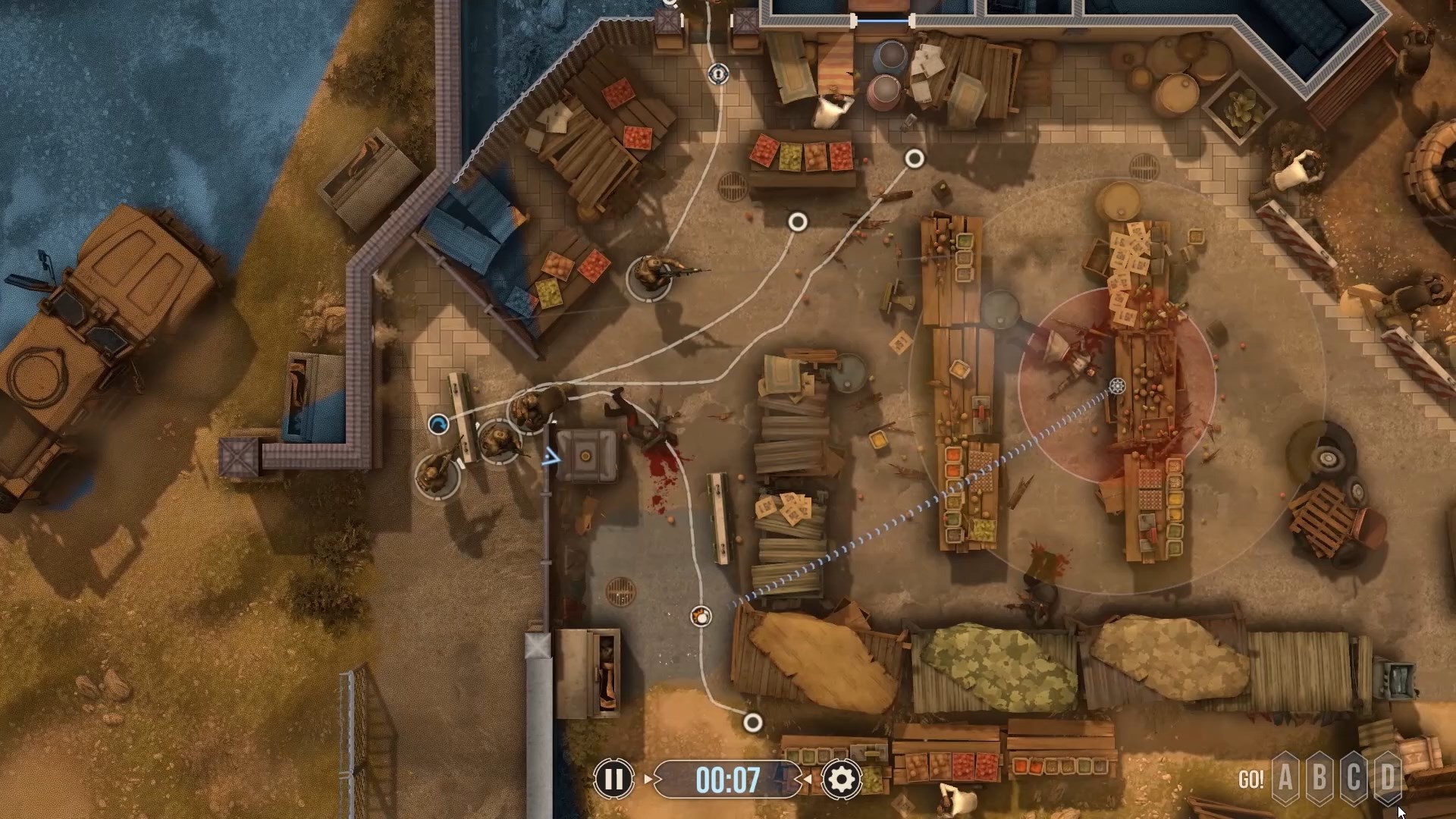 One minor niggle I have and this could be a very personal pet peeve. Once you are neck-deep in a mission there is no way to look up the scenario goals and objectives without bouncing back to the select screen menu.. This could be a sign of my deteriorating short term memory but an icon at the bottom of the screen which displays the operation task notes would be a great quality of life feature for all us old gits.

Another cool feature would be the ability to assign colours to individual soldier paths. This has already been implemented in the online co-op mode and would greatly enhance the single-player experience. I find the tracer lines soon get hard to distinguish when you have multiple paths overlapping.

In the midst of writing this preview, a new patch has been uploaded to steam to resolve the above issue. You can now select coloured paths from the menu. This shows the Devs are listening to the fanbase and being very proactive in responding, To underline this fact there have been 4 updates since launch which was only a week or so ago. This is great and shows the teams long term commitment to the project is no hollow promise. 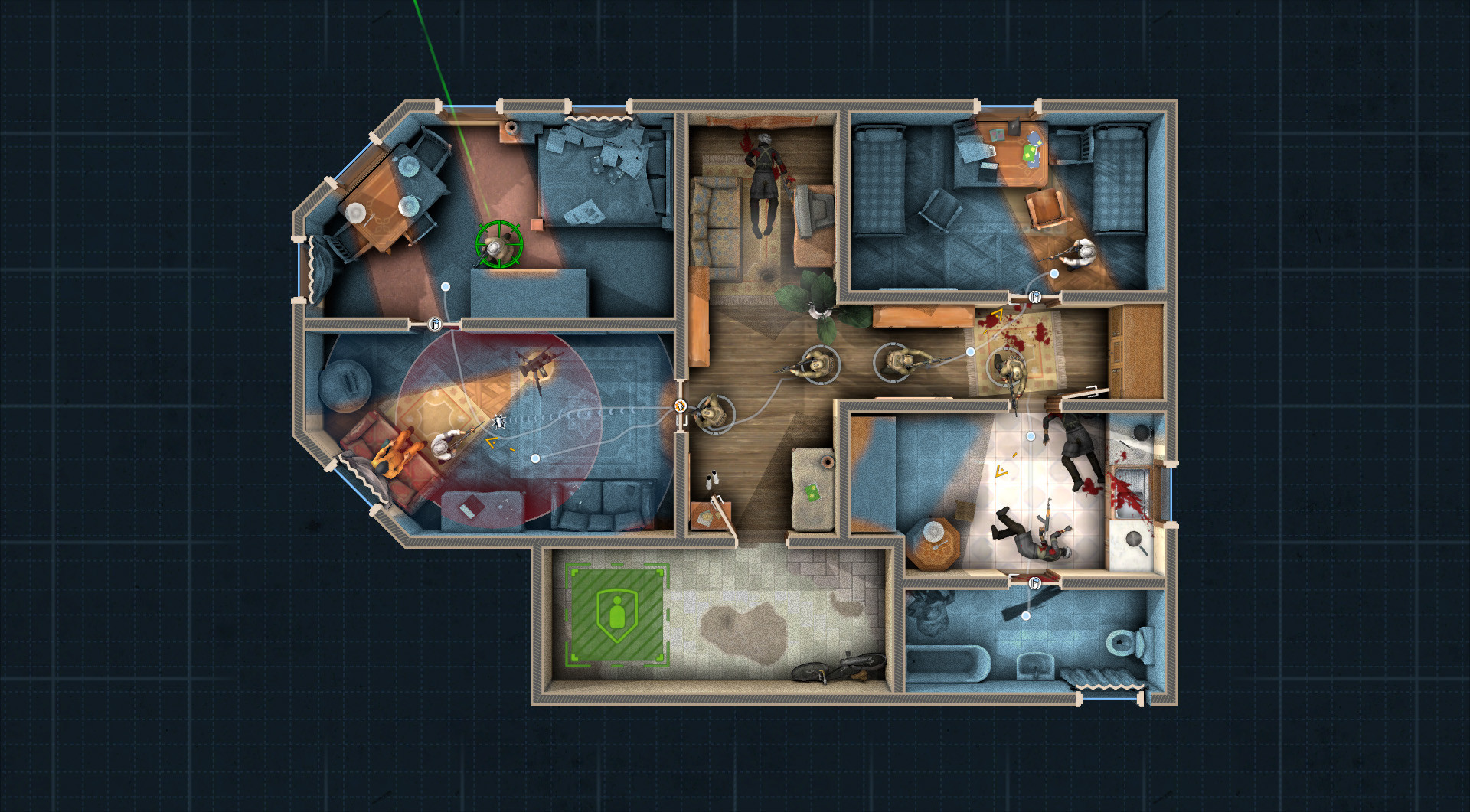 I have no qualms in recommending Door Kickers 2 in its current state. There’s more than enough content to warrant the asking price. Given the developer’s previous track record for supporting their games long past the launch window, the future is bright for more scenarios and additional quality of life features. If they can add the promised Steam workshop support before the 1.0 release date then that would make the game an insta-buy for any fans of swat team styled tactics.