Do you know the Walking Cat?

The spiritual sequel to Fight of Gods

If there’s one thing you might have heard it’s the ban of Fight of Gods in Malaysia and Thailand which made a few headlines. Digital Crafter has now moved to less controversial pastures with their next fighting game: Fight of Animals. A game based on Animal memes such as the Walking Cat, Crowrilla, etc.
While it might seem like a joke game at first, surprisingly there’s an interesting game beneath the surfaces tomfoolery. To the surprise of many, it even comes with a better rollback netcode, an advanced technique on top of the basic delay-based netcode to make sure that more connections become playable.

That’s how it is. Fight of Animals is purely based on meme depiction of animals.
Unfortunately, it involves no story or individual backstories. Meanwhile, it does shine in… 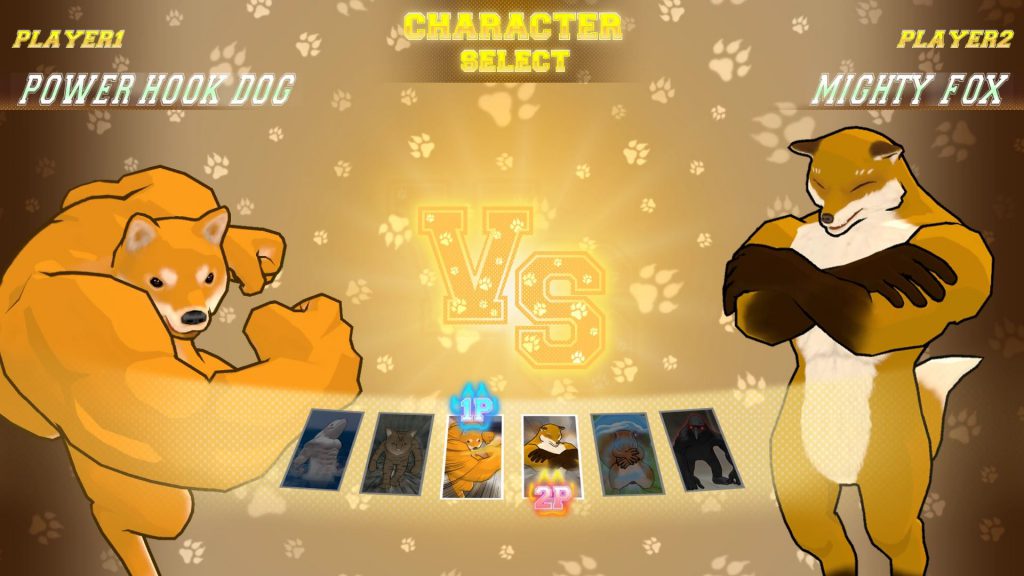 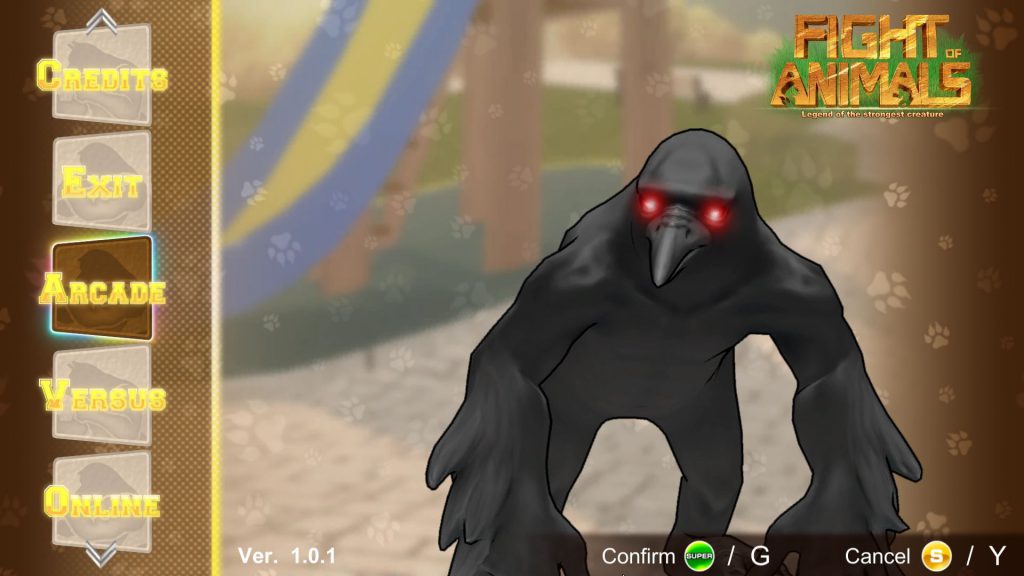 There’s the typical Arcade mode that puts you through the gauntlet against the whole cast and ends with a simple credit staff roll. It also offers multiple difficulties ranging from Very Easy to Very Hard. Then there’s the typical Versus and a basic Training Mode. Nothing too fancy.
Overall, you can expect some challenge but it lacks the nuances when fighting against other people. 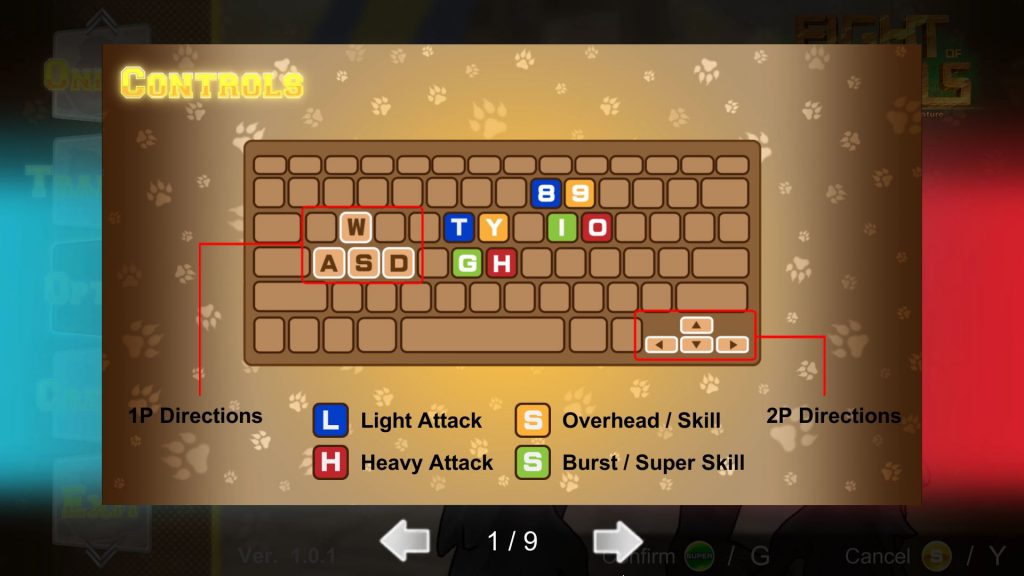 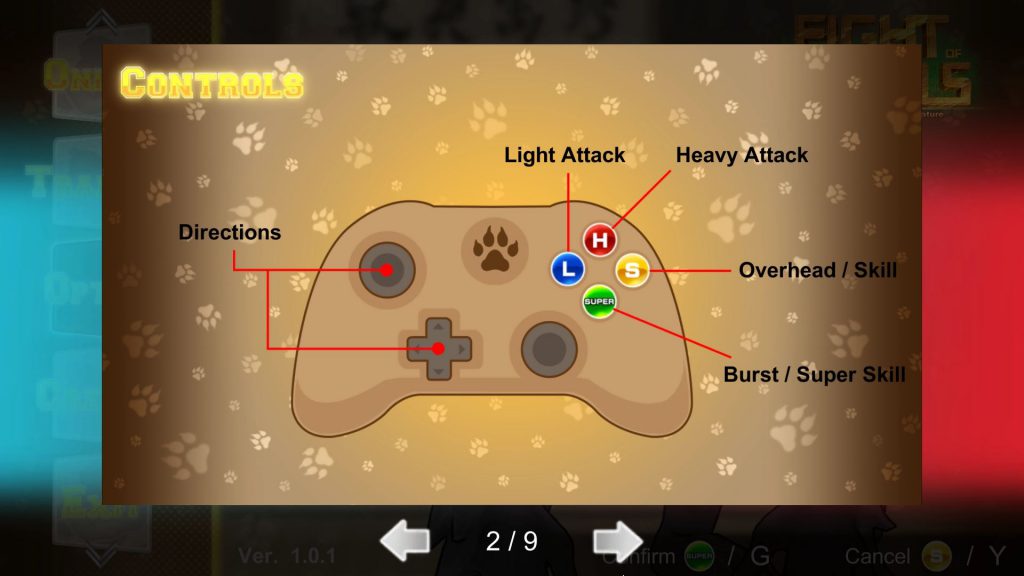 Like many other games, it tries to simplify the mantra of complicated inputs in fighting games. It does it even in a unique way by opting for a simple 4-button layout. Consisting of light, heavy, special and super special attack.
Yes, it is as simple as it sounds. There are no special inputs involved except for simple directional inputs when using the special attack button, as each direction will offer a different special attack except up.
BUT there are some mechanics that add a few layers of depth, which is why we’re taking a tour through all of them. 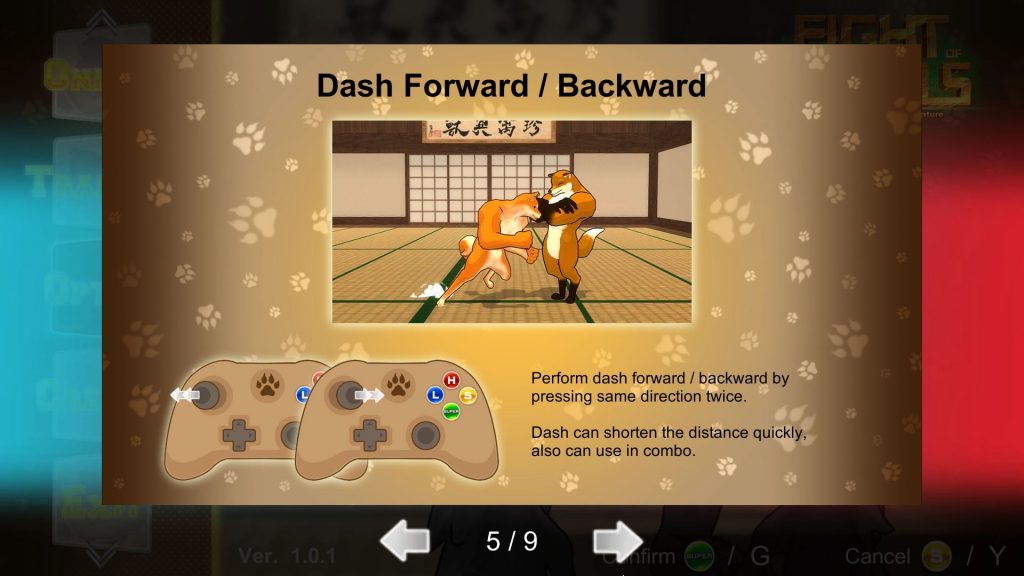 Fight of Animals utilizes the standard movement options Street Fighter style. You can walk back and forth, jump, crouch, and dash. The simple and ground-oriented movement is at least promising an easy entry.

The Normal Attacks
From what I’ve experienced, the attacks are standardized across all characters in terms of functions. Your light attacks are short and fast, and the crouching ones hit low (they have to be blocked low!). While you can cancel them into the heavy normal to confirm your hits and turn them into damaging combos.
Heavy attacks, on the other hand, are slower but boast a much better range in comparison. The crouching versions usually launch the opponent into the air, though I’d argue that’s more of a thing used for combos.
Then we get to the meat and potatoes of the attacking system, which we’ll split into two parts. 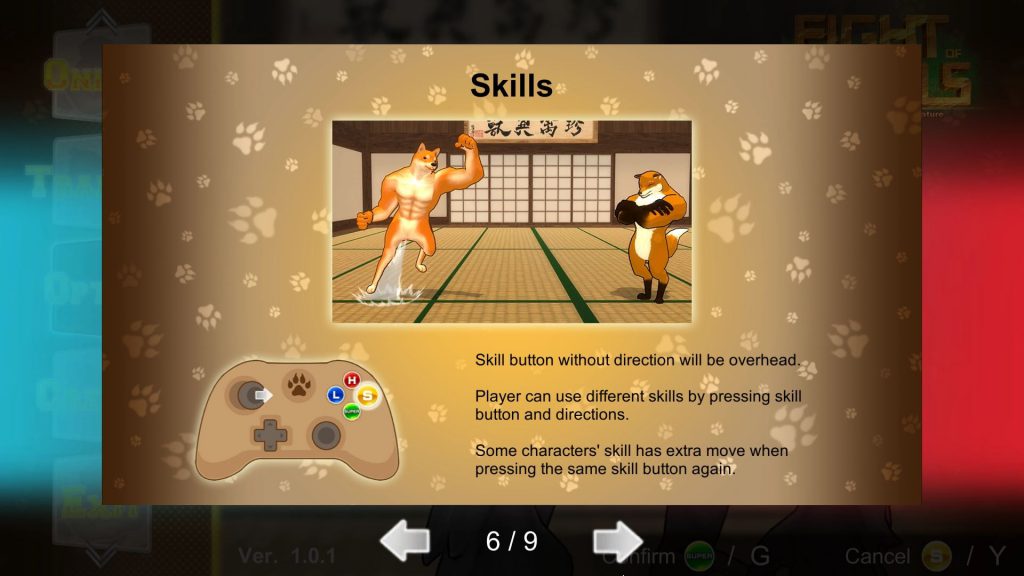 Universal Overhead (Neutral + Special)
This attack requires the opponent to block high and you’ll be using it in tandem with the low light attack to make the opponent guess between high or low. These overheads are slower than the light lows!
If you manage to score a hit with it, you can cancel that attack into a heavy for some damaging conversions but woe if you are getting blocked as seasoned players are able to land a free attack on you and therefore turn the tables.

Anti Air (Down + Special)
While some are better than others and a few are even expanding combo opportunities, this is what you use against opponents that are trying to jump in on you.
This helps you to have an easy universal answer to a specific issue that will creep up a lot.
Beware that characters like Magic Squirrel don’t have a particularly good one and require fast reaction and timing to counteract the jump but the payoff is also bigger since you can cancel it into the dash and continue dishing out damage.
Wait! What’s a dash cancel? We’ll talk about it later since it’s a major part of the combo system.

The Skills (Special Attacks) part 2: Character specific attacks
Aside from different speed and range in their normal attacks, this is where the big differences start to shine. The Magic Squirrel is one of the two characters with a projectile and turns it from a stumpy character into a long-range character that tries to control space with its projectile.
The Walking Cat has a shoulder tackle with an optional follow-up, making it hard to decide whether to attack after the first attack or wait for the follow up to come out and punish it with a big combo. While the shoulder attack is safe on block it still leads to a disadvantage since the opponent can move first. Hence you have to take a guess whether your opponent opts for a low or high.
These are just two examples, though not all of them can be put out without thought and requires smart use of normal attacks before even utilizing special attacks. 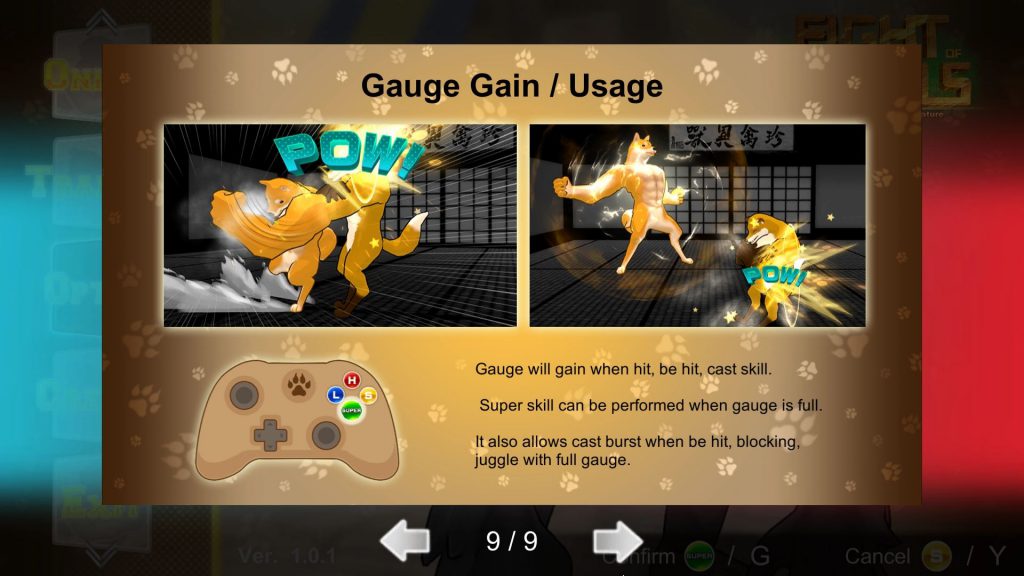 By attacking and successful contact or taking hits your special bar will fill up. Once it’s full you get two options in how to utilize that important resource.
The Super Specials are invincible and deliver big damage, making them a perfect combo ender. This is especially useful when you get into a new round with a full special gauge from your last round since you’ll be building it back up again anyway.
The associated risk of using it is the loss of the Burst option. When you’re blocking or are getting hit, you can escape the combo onslaught by depleting your special gauge. This might be a more preferable option if you’re a more defence-oriented player.

Gameplay Mechanics
Since we’re done with the controls and their specific uses, let’s talk about the unique gameplay mechanics of the game.

Life and the lack of Scaling
All characters have a standard 1000 life, which can be seen from the training mode. It’s important to note that it does not employ any kind of damage scaling, making big and long combos an important factor in optimizing your gameplay. It’s not rare to lose 50% of your health when you’re getting hit by a combo that employs the super special.

Attack Cancels
You can go from light to heavy to special without any timing requirement and in can only be done in this particular sequence, outside of the Universal Overhead into Heavy!
This important because that’s how you start and make your combos. Learning this will give you some basic damage options. But there’s an advanced technique that opens even more savage damage opportunities. 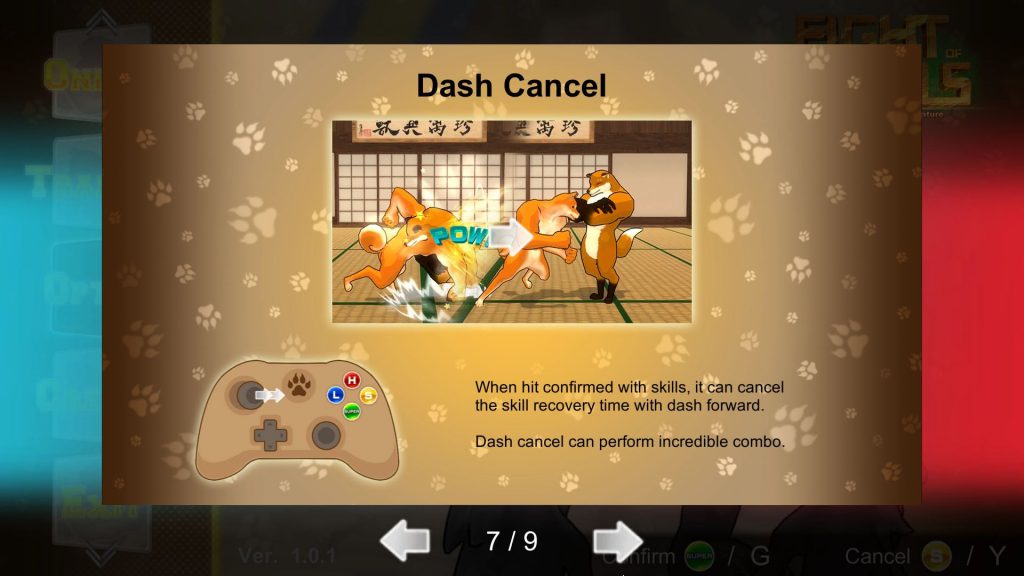 This unique and most advanced mechanic of the game will enable you to create the most damaging combos and sometimes even gameplay options.
Let’s start with the latter, the Magic Squirrels projectile isn’t particularly strong but in combination with the Dash Cancel it becomes a much more dangerous tool because you can use it to cancel the recovery from the projectile and control a bigger range of space. Depending on the range, it also creates an opportunity to go for a free low or high attack.

The same school of thought applies to create bigger and longer combos. By Dash Cancelling your Special Attacks you can create combos that weren’t possible before. For example, the Walking Cat can go from Uppercut to Uppercut as long as the opponent is high enough. Which leads us to the combo restrictions.

Juggles
What are juggles? This is when you’re on the ground and your opponent is being hit helplessly in the air and therefore is also combo. By utilizing Dash Cancel you will be able to create the most devastating combos in the game but the opponent will be lower to the ground each time you manage to land a hit. So there’s no need to fear a one-sided unlimited combo! 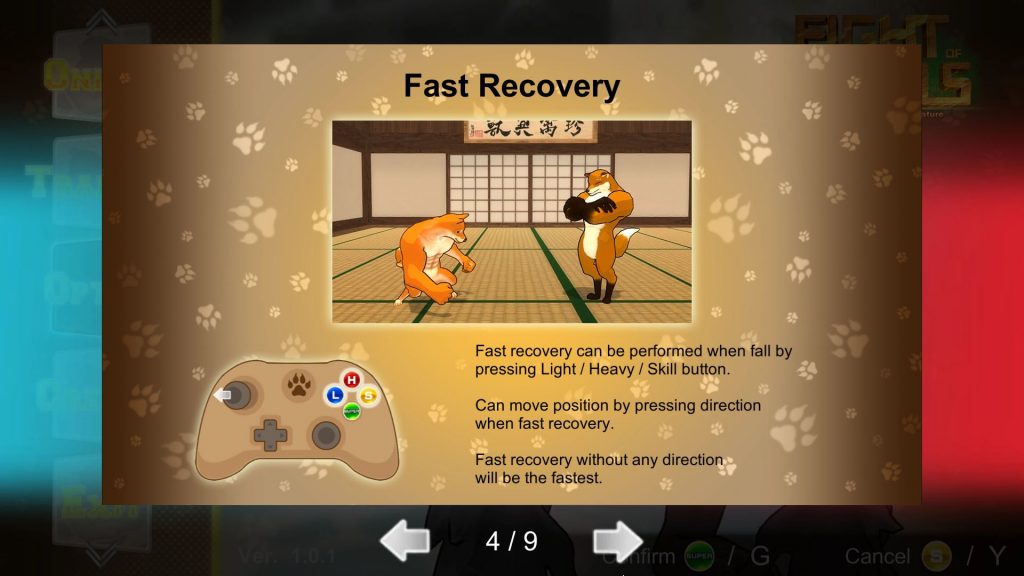 You got hit by a combo and now you’re down on the mat. Fortunately, you have some options on how to get up which makes it harder for your opponent to keep the offense going since there’s a choice between recovery options. You can either just stand up or go backwards. It’s essential to alternate between them to make your opponent guess between them.
Once you’re in the corner, it becomes much more challenging to defend yourself because you no longer have the space to move backwards.

Gameplay Impressions
Fight of Animals forfeits throws and opts for a simpler left-right/low-high mixups to open up your opponent and dish out the damage. Each character shows a few differences, offering potentially a few different playstyles.
One big drawback could be the reduction of individuality when the specials aren’t different enough. Walking Cat, Crowrilla and Magic Squirrel are the big standouts at first glance, while the others have a seemingly comparable gameplan.
What do I mean? Their Special Attacks are mostly there for combos and requires you to focus on the Normal Attacks due to the risky nature of the Special Attacks.
However, I found something particularly interesting when it comes to the Powerful Hook Dog. It can use the light attack to force the opponent into standing from a juggle. At first, it doesn’t sound like something big but the implications are rather big because you can use it to forcefully continue your offense. Why? Because you can once again force your opponent to choose between low and high since he didn’t get a knockdown and therefore an extra defensive decision.

Updates
Initially, the Walking Cat was incredibly strong due to easy but extremely damaging combos that went from like 50% base combo to 70% by utilizing the Super Special. The newest Christmas update toned down the ridiculous damage capability, creating a more balanced roster.

Online
I haven’t played that much of it but according to the developers, it uses the famous rollback netcode. Ergo, it should be possible to have more consistent games in netplay in comparison to delay based netcode. From personal experience, it doesn’t show any signs of bad implementations like heavy teleporting at small discrepancies/lag but it obviously doesn’t help against a connection that goes really bad.
When it goes really bad you can suddenly get a completely different situation than the one depicted on your screen, probably because you went out of sync and taking the information from your opponent instead. 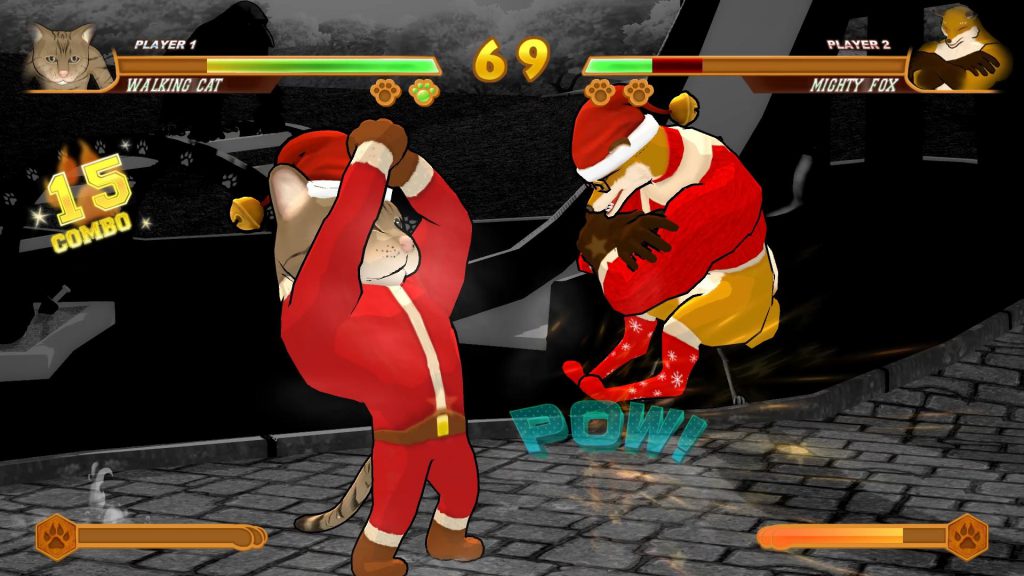 It’s not a looker and neither does it look bad. Considering the budget it falls within the expectations. As of now, each fighter comes with 2 colors and there are 4 stages to choose from.
The animations look ok and look simplistic in detail to give it a cartoony look.

None of the characters are voiced, which leaves you with sound effects from the attacks and music.
When it comes to utility, I can see that the effects and sound are doing their duty in signalling a successful hit without impairing your vision with excessive effects.
The music, on the other hand, sounds at times surprisingly good! The Fight Arena and Dojo, in particular, are quite memorable.

As funky as it might look at first glance, Fight of Animals is a surprisingly competent fighting game that even comes with a rollback netcode. The latter seems to implement just fine and looks nothing like the worst cases I have experienced so far.

Considering the solid gameplay and fair pricing, it’s safe to award it a “Save”. If you’re someone who likes to dabble into some obscure fighting game then you might find yourself spending a lot of hours on it, especially when you have someone to play against.