Take a stroll through ten miles of zombie-infested chaos as you escape the fate of your neighbors in this procedurally-generated action-RPG.

The zombie theme is one that can be truly amazing when done well though most entries in it seem to fall noticeably short of that mark. However, this has yet to deter many of us from eating them right up on release if they look at all promising. I jumped into 10 Miles To Safety expecting something along the lines of an action-packed Project Zomboid and was initially a bit disappointed until I realized rather quickly that this title offers its own unique experience that combines a number of elements that reminded me of other solid titles including Project Zomboid but also Dying Light, State of Decay 2, 7 Days to Die, and the weird outlier here, Fortnite (yes, Fortnite). It’s important to remember, though, that these elements are streamlined for the most part as this is a comparatively simple action-RPG.

Be Fast or Be Dinner

You have one simple goal in 10 Miles To Safety: survive ten miles of zombie-infested territory and escape to the last promise of civilization. This seems rather simple until you start getting a hang of the mechanics which certainly surprised me with the depth that was spread out across several systems. Though to be clear, this is less of a survival game and more of an action-RPG; you don’t have any needs to fill, such as food or water, and the vast majority of your time is spent either fighting or dodging zombies (sometimes both at the same time if things are getting wild). 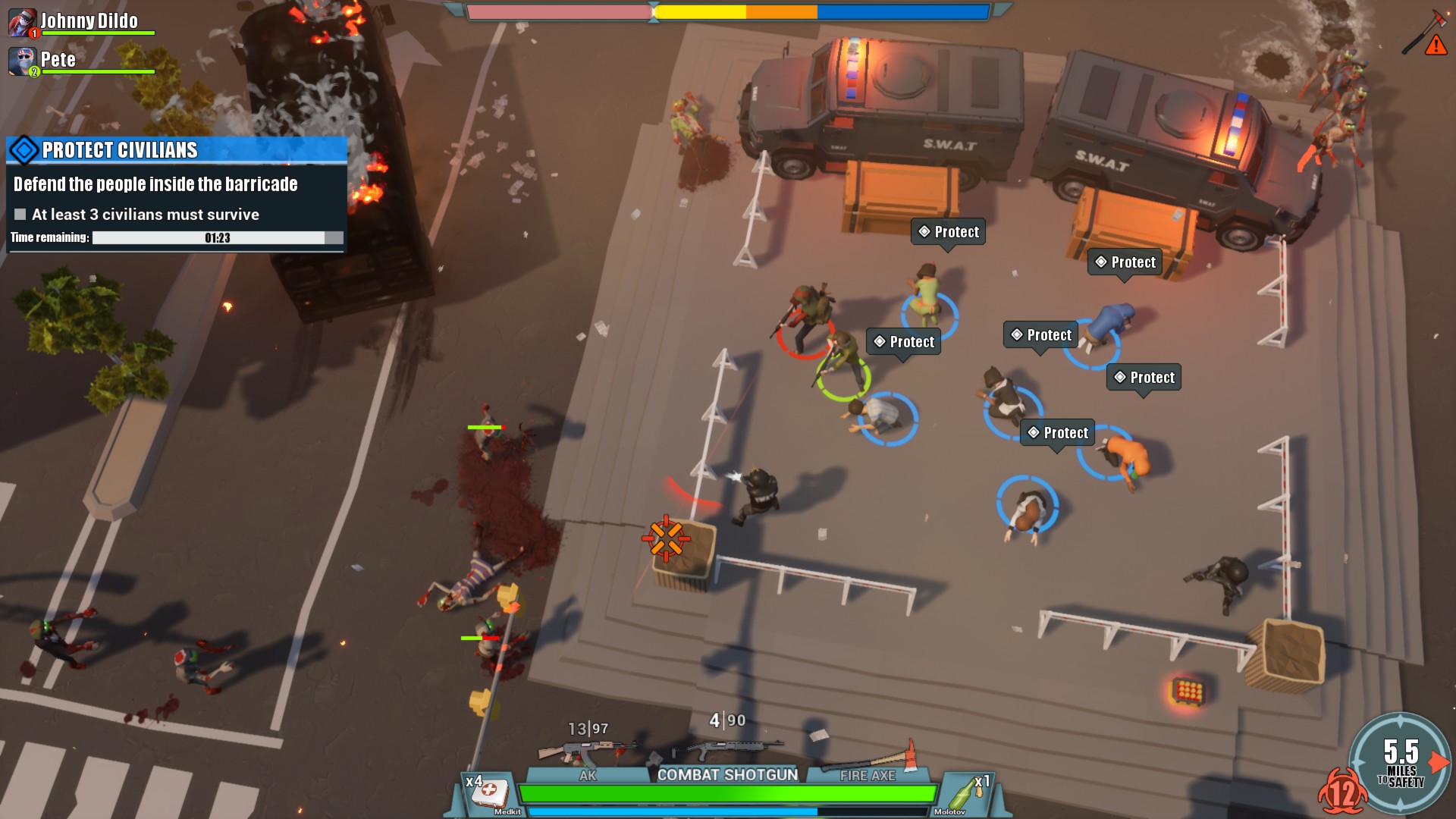 An understanding of the time mechanic is integral to your survival. During the day you’ll be moving through the environment as quickly as you can, either sprinting toward your end goal of “safety” or spending some time looting the surrounding area for supplies and better equipment, depending on your priorities at the time. The Outbreak Level increases the closer you get to “safety” so it is a requirement that you learn when to push forward and when to hang back for a bit to find better gear. 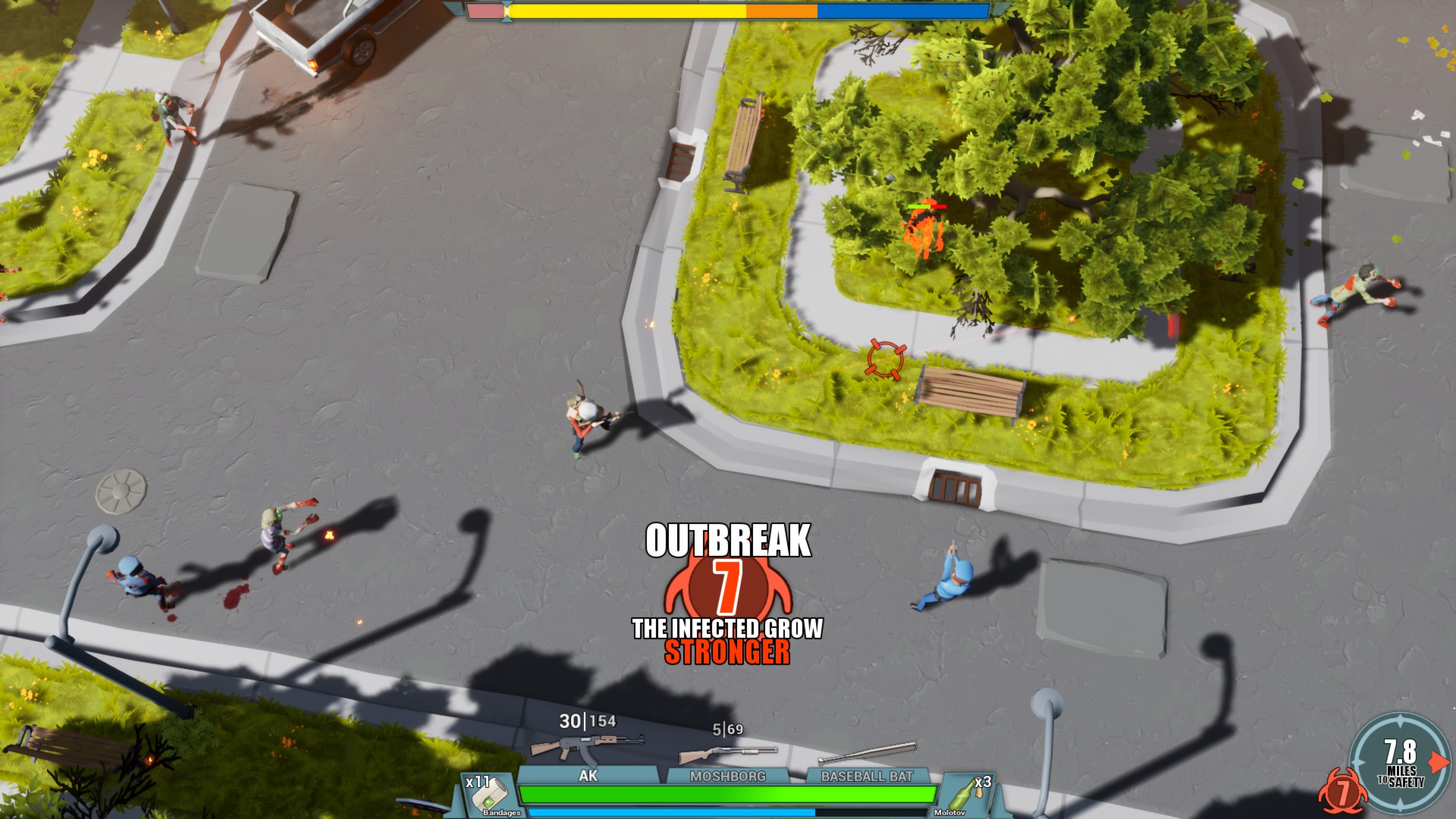 Your survival at night is a completely different story. In most cases, you’ll be rushing to the nearest location that can be adequately defended and fortifying it as soon as dusk arrives. The monstrous creatures that swarm you from nightfall to dawn are fast and powerful, a significant difference from the slow-moving zombies of the day. Your fortifications will evolve throughout your run as you find blueprints that allow you to build varied and superior ones; at first you’ll have basic wooden fortifications but as you progress you’ll be setting up spiked fortifications, razor wire, and even gun sentries to hold off the attackers. 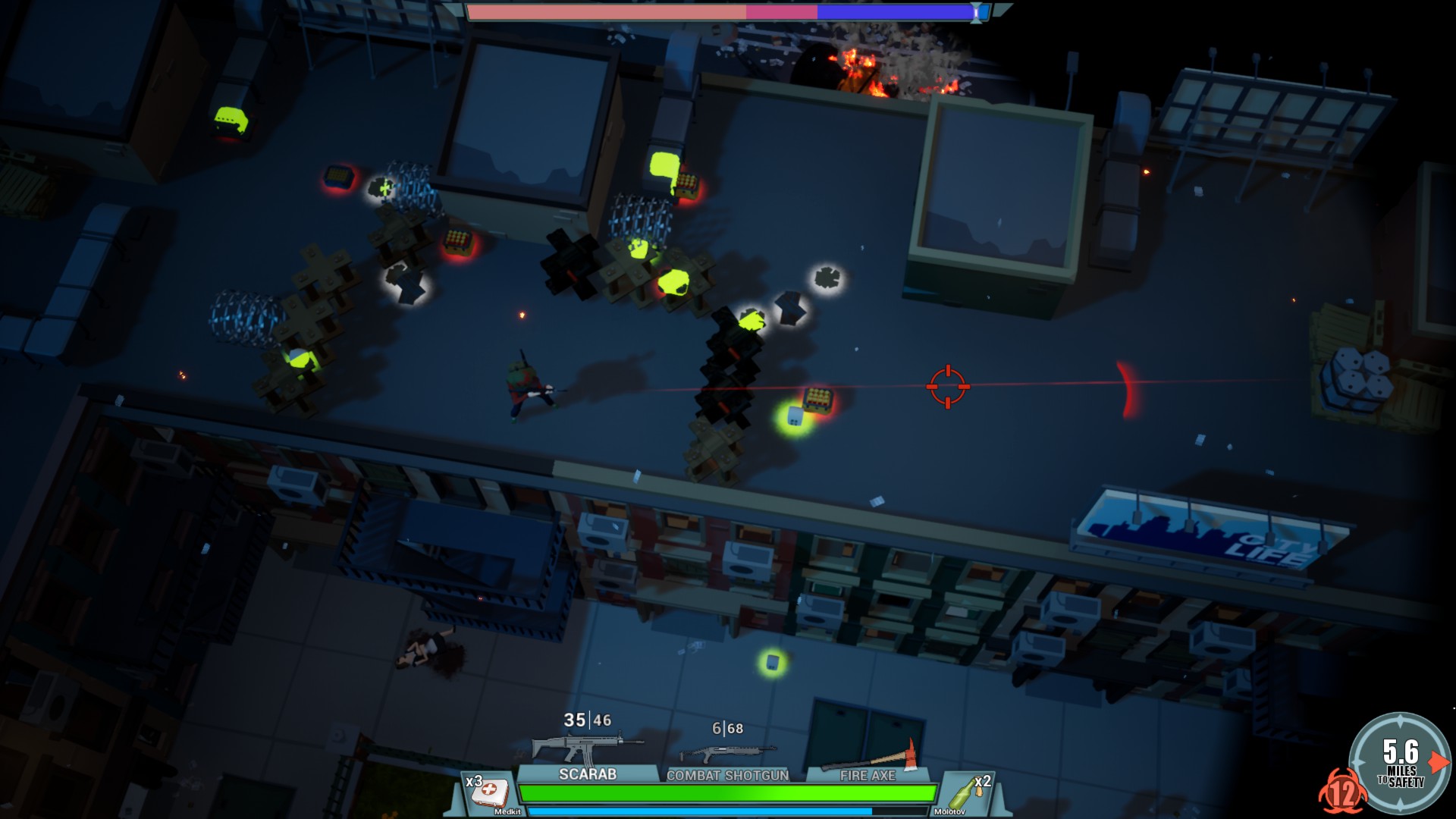 One of the most important rules of surviving the zombie apocalypse is that you never let yourself get too attached to anyone or anything. 10 Miles To Safety certainly does its part to play to this by requiring that you constantly find new gear and accept that the survivors that join you are little more than temporary backup before they are inevitably devoured by the horde. One of the only complaints that I have about this game is that the survivor AI is as brain-dead as any zombie that you’ll encounter. Almost every time that a survivor was lost they had done something particularly stupid, either randomly standing some distance outside of the fortifications that I had built or hanging out in the blast radius of an object that was about to explode. It goes without saying that an improvement to this would drastically increase your allied survivors’ longevity, but I would recommend taking it one step further and playing with a friend if you have the opportunity. I played in single-player mode and frequently pictured entertaining scenarios in my head that could take place if you were experiencing the game with someone else who could think and plan the same as you. 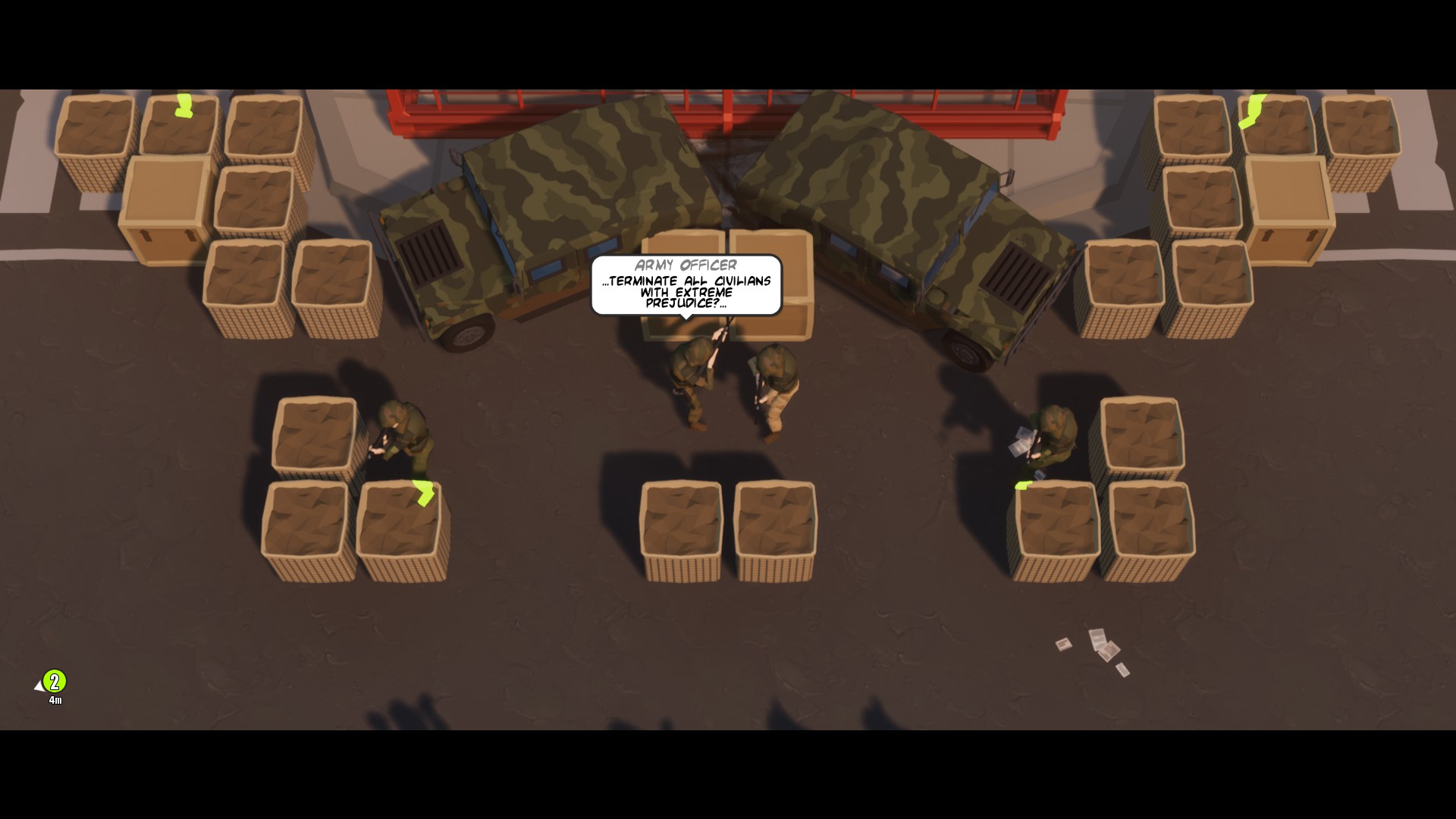 On the other hand, I enjoyed the gear system, particularly the weapons. Although simpler than we often see elsewhere, many of the old-faithfuls are here including, but not limited to, sniper rifles, assault rifles, shotguns, and flamethrowers. An impressive number of each of these exists though the main difference between one weapon and another in the same category is the amount of damage that it deals. You’ll be looting to find new armaments frequently as one that is absolutely amazing one moment is likely to be nearly obsolete in a half hour’s time. This goes for armor as well, though both helmets and body armor are composed of only one category so every one that you find is either clearly better or clearly worse than what you have on. 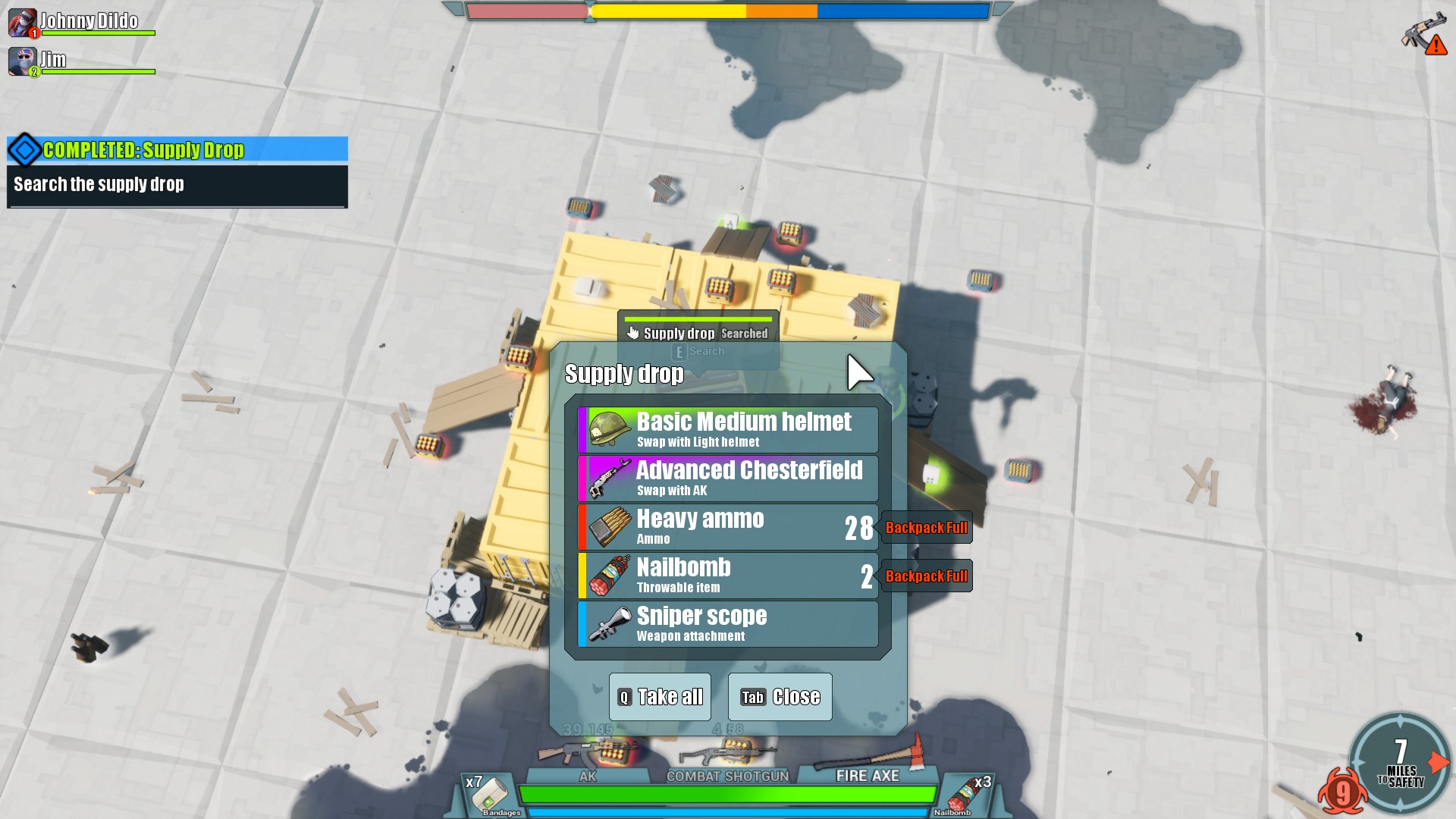 Which Survivor Are You?

You have your choice of five characters at the start of a new game: the brawler, the engineer, the crafter, the looter, and the sharpshooter. Each of these is defined by a unique model that you play as and a few traits that make them exceptional at certain aspects of your survival. I played as the looter which made it so that I found more materials and ammo when searching containers and I made less noise while doing so, reducing the number of zombies that would show up. Meanwhile, the brawler has increased health and melee damage meaning that he can tear it up in direct combat, the engineer builds fortifications that are superior and cheaper to those put up by anyone else, the crafter crafts consumables more quickly and efficiently and they have a greater effect, while the sharpshooter has an increased chance to land headshots and deals bonus damage with sniper rifles. All of these sound very useful and I’ll certainly be bouncing around between them in future playthroughs to see how well they compare in the late game. 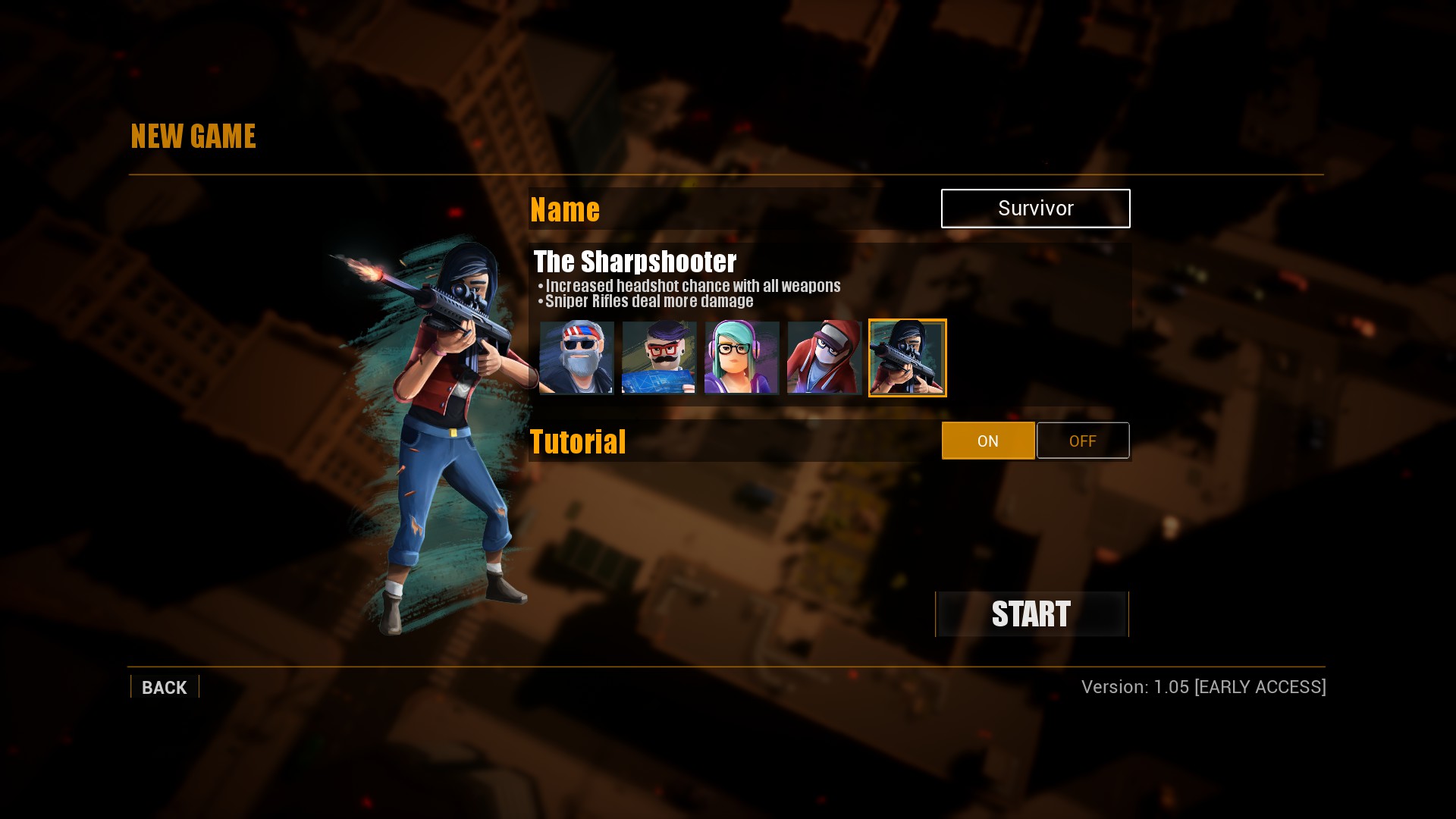 I wasn’t sure how I felt about 10 Miles To Safety at first but it grew on me quickly. Although its art style is rather basic, as is its audio, the mechanics drew me in and kept me hooked on something that I would suggest is an arcade experience with some depth to it. I never experienced any kind of technical issues, no crashes or bugs or anything of that sort. I felt that the challenge of the game actually caught me off-guard, I was expecting a stroll in the park but I actually died frequently and I never felt cheated when I did. Its playtime is more than you would expect as well, I would assume that the average game last at least ten hours. If the concept interests you, I recommend picking this game up and giving it shot with bonus points if you’ve got a friend to bring along for the ride. It may not offer any one individual aspect that is truly new, but it’s innovative in the way that it puts them together. 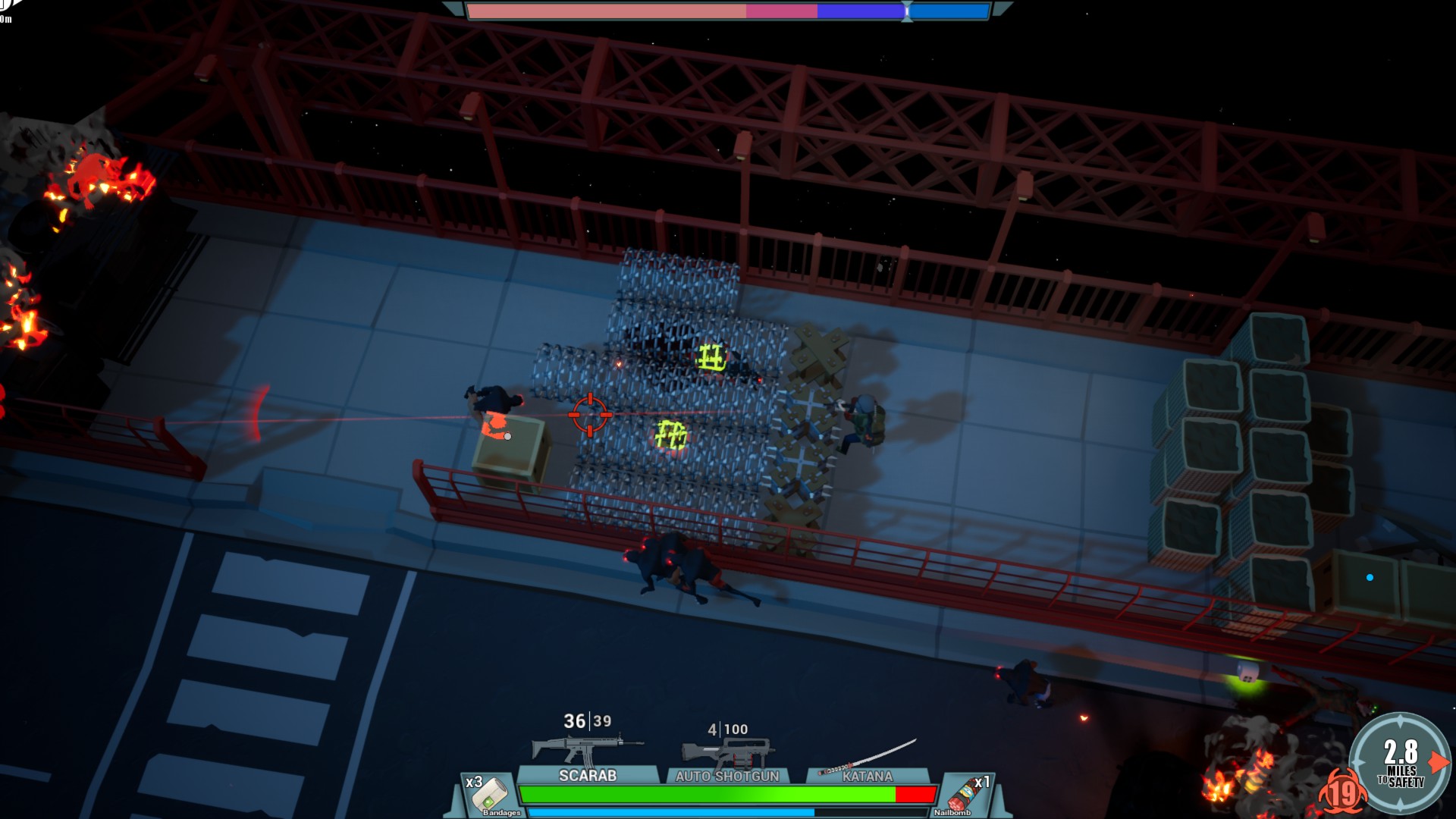