REVIEW: Psychedelica of the Ashen Hawk

As mentioned before when I review Visual Novels, I refuse to spoil the story. A Visual Novel doesn’t really have anything else to offer the player other than its story, so it would spoil the game itself if I told you too many details. With that being said I will enlighten you on one major detail that in any case is revealed very early on. I tell you this now because it’s really the only way I can describe the gameplay. You play as a woman, cross-dressing as a man, who cross-dresses as a woman sometimes. That sounds a bit confusing, so let’s try that again. It is the story of a woman who sometimes dresses up as a woman to hide the fact she isn’t a man… no… that doesn’t sound right either. It’s a progressive story of a transgendered individual who feels compelled to hide their biological sex…no that’s not quite it either. It’s a story about a witch with a glowing red eye who hides the fact she is a witch by dressing up like a man because apparently she can’t be a witch if she is male. However, there is a more essential reason for her gender deception. Due to a complex rivalry between two rival clans, she drops the male disguise to get information from the rivals of the Wolf clan she belongs to when she is masquerading as a man. I’ll try to get into why this note is important later.

Psychedelica of the Ashen Hawk has the basic Otome elements but, unlike games such as Hakuoki, there isn’t such a big deal placed on the romance elements of the game. For the most part, you follow the common route from one end of the game to the other. Due to the wonderful chaptering element, you are able to go back in time to any already experienced chapters and take other route options in order to unlock the various endings the game has to offer. This means that you really only have to play the story once, then just fiddle around at the end a bit to unlock the bits you missed rather than replaying from the start again. The story itself can be a little meandering as it gets you there but the little bits of side minutia really help with the character development. While some of them seem entirely pointless, they help you understand the characters, their individual personalities and beliefs, mannerisms and their relationships with other characters in the game. 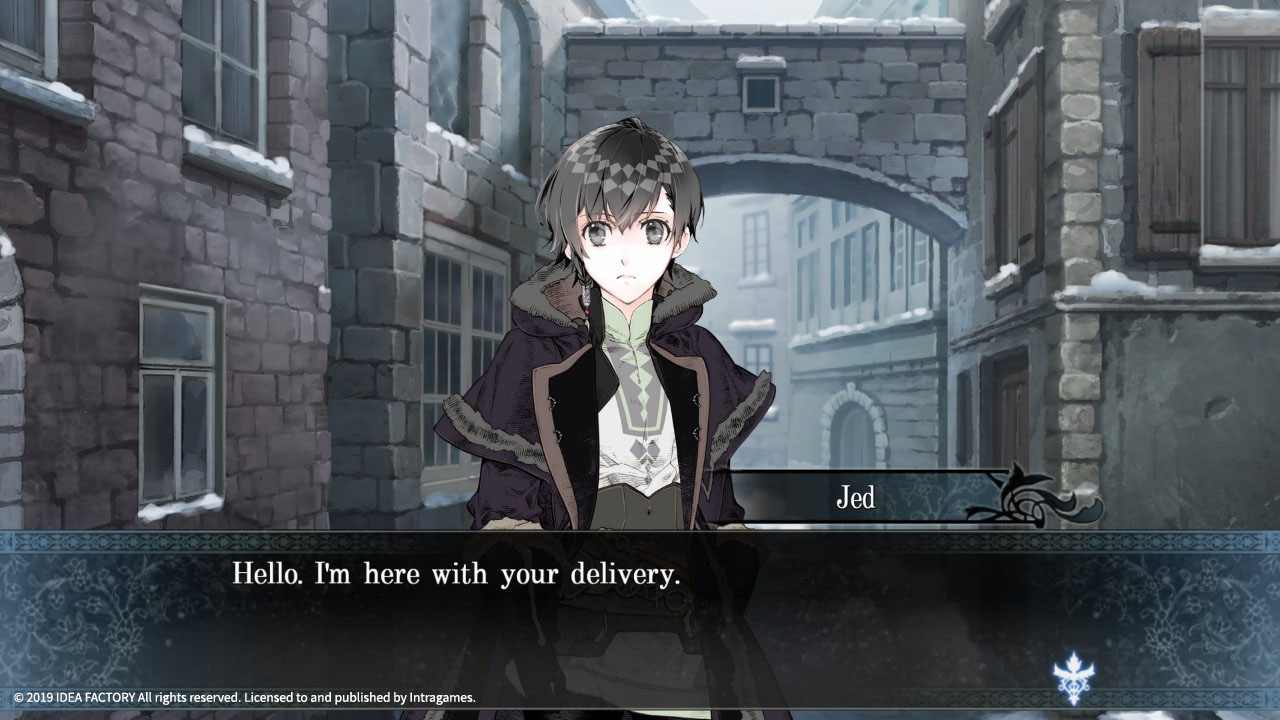 The main town map is where things start getting a little more complicated. The map is broken down into various areas you can visit and each one is potentially broken down into a few different elements. There is the main story that must be progressed eventually, as well as side stories and minor fact-finding elements. The fact-finding elements typically only have a few lines of dialogue and grant you a memory. The memories can be cashed in to unlock more stories besides the already unlocked ones. The side stories, while they don’t really progress the game, do give all the characters far more depth. Sure, some of them do hint at the notion that they may impact the story due to the main character investigating whatever the chapter is currently interested in the most, but really, they quickly spin into something entirely unrelated. The side stories are plentiful and most of them are quite enjoyable to view. Some of them start feeling a little long but it is right about that point that it snaps back to the town map allowing you to choose what you want to do next. 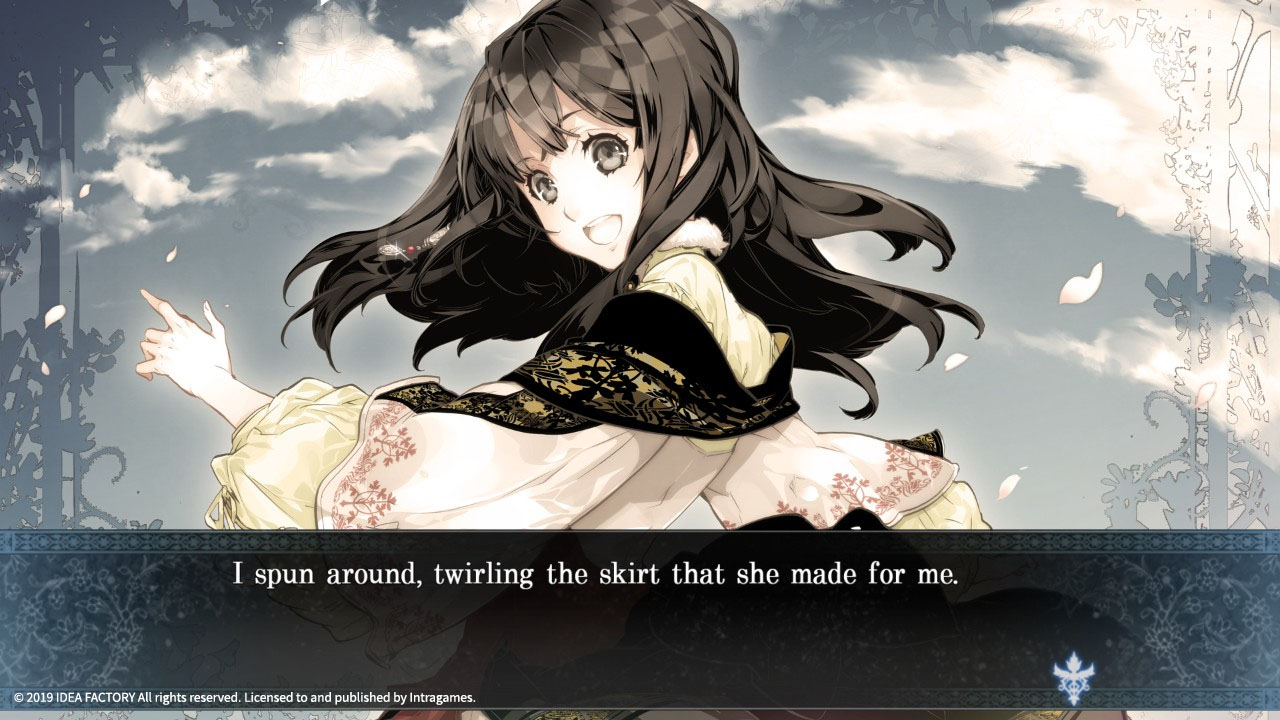 Here is where things start to get a little convoluted! Not saying that as a bad thing, but it is where this game is trying to make its own mark in the Otome Visual Novel world rather than just following in the footsteps of its processors. After you progress far enough into the game, you will unlock your other-self. Depending on which you are at the moment will impact what stories are available to you. The Hawk clan won’t even give your male self the time of day, but will try to butter up your female self and carry on a conversation with you. The opposite can be said for the Wolf clan. The Wolf clan knows your male self as a trusted member, whereas your female self is a stranger to them. Sure they are still friendly to you, as they are with all citizens, but they are far more likely to share information with someone they know and trust. The general citizens themselves fall into the same gender-specific mindsets as well. For example, your male self can visit the tavern and no one bats an eye, but your female self walks in and suddenly you are miss popular. It’s kind of like real life in that regard! It’s easy to switch between the male self and female self so you are able to tell what stories are still available to view for each gender portrayed. You can progress the main story as fast as you want, but these sorts of games really benefit from being given the chance to engross you in their side stories. 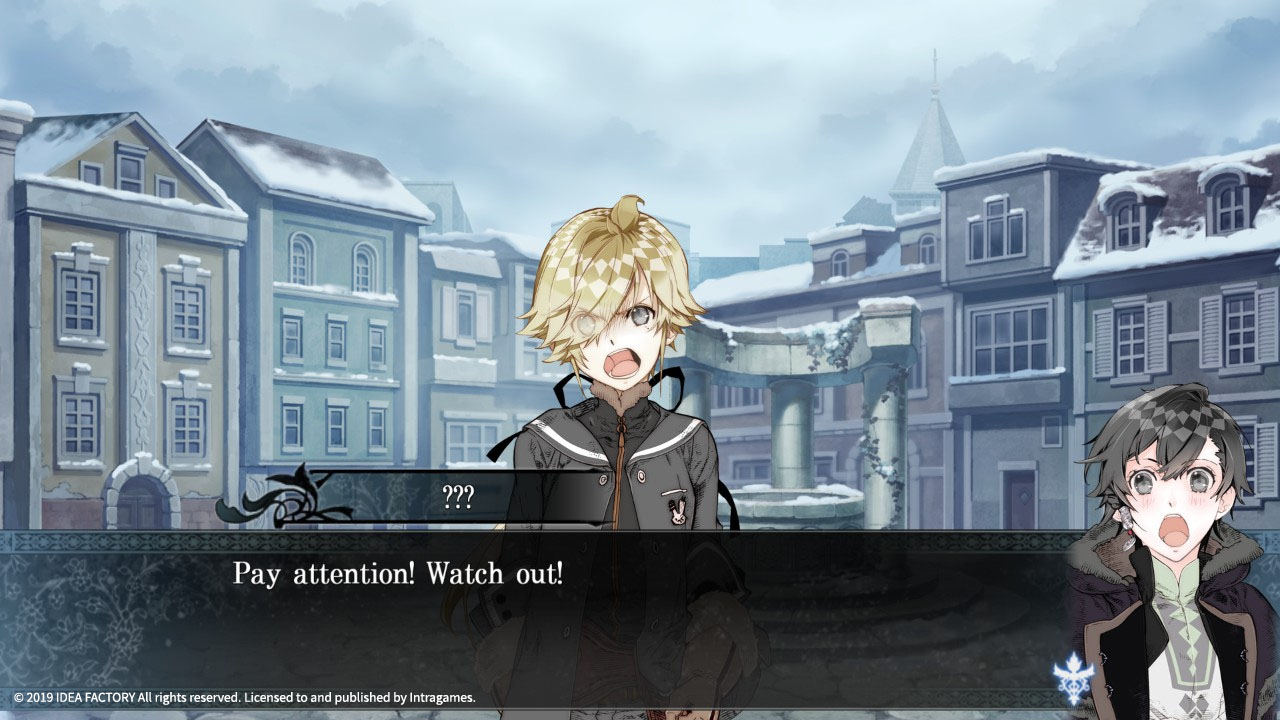 The graphics and animation in the game are far more dynamic than some of the other Visual Novels I have played. Your character will change poses, turn their back, and move around the screen to a certain degree as the story unfolds. The same can be said for the other characters you encounter. While they don’t have fluid motions, you don’t really expect that of a Visual Novel. The fact it went far beyond the standard static images makes this one of the best-looking Visual Novels I have played in quite some time, possibly ever. All character models are highly detailed, as one would expect from an Idea Factory Visual Novel. They even have small personalization details if you look close enough. For example, you encounter a child with a pet rabbit, if you look closely at the child’s outfit you will notice a little rabbit pin. These minute details really help make the characters look unique and help their personalities shine even more. 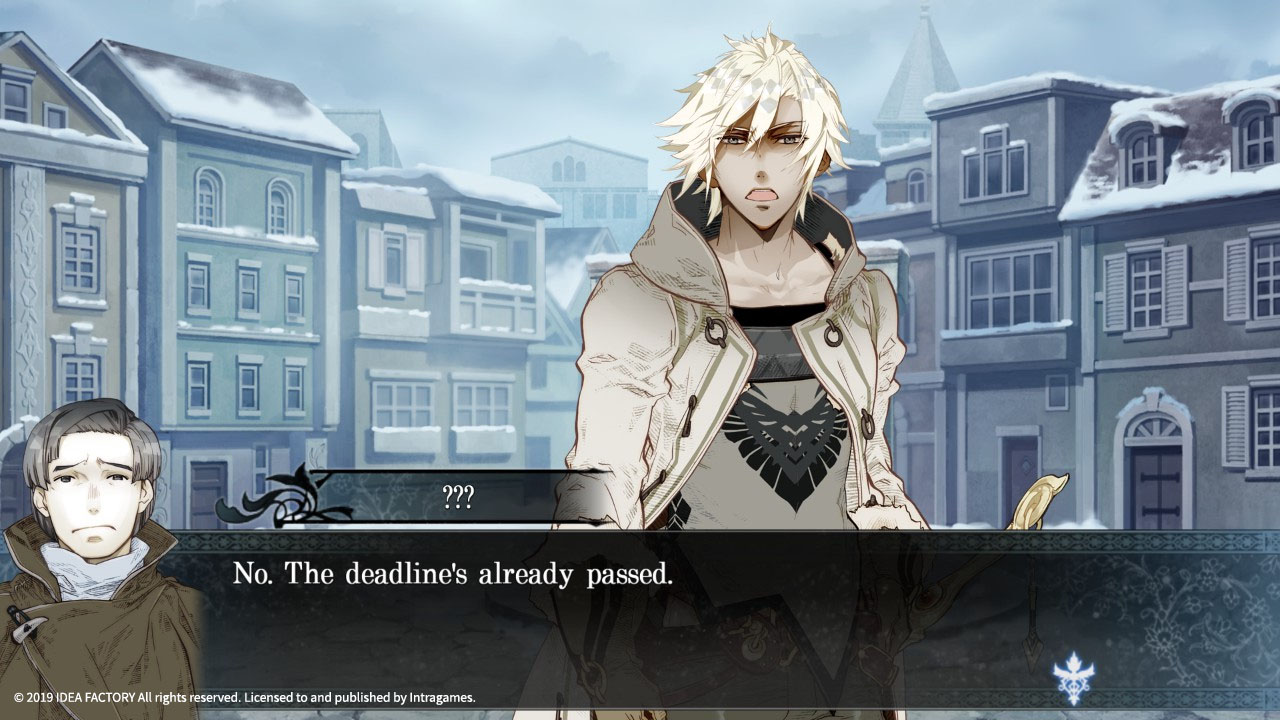 The town map is actually a little drab and dull, but it serves its purpose. It’s meant to look that way really, so you can forgive that, but it’s a stark contrast to the vibrancy of the rest of the game. The backgrounds are all decently detailed, they have enough accents to make them look interesting but not so much that they look busy. The backgrounds get recycled a lot, but it wouldn’t make sense for it to be otherwise. Each time you visit the tavern, it looks like the same tavern, because it is. There are enough locations to keep it interesting even with the individual locations always looking pretty much the same as the last time you visited there. 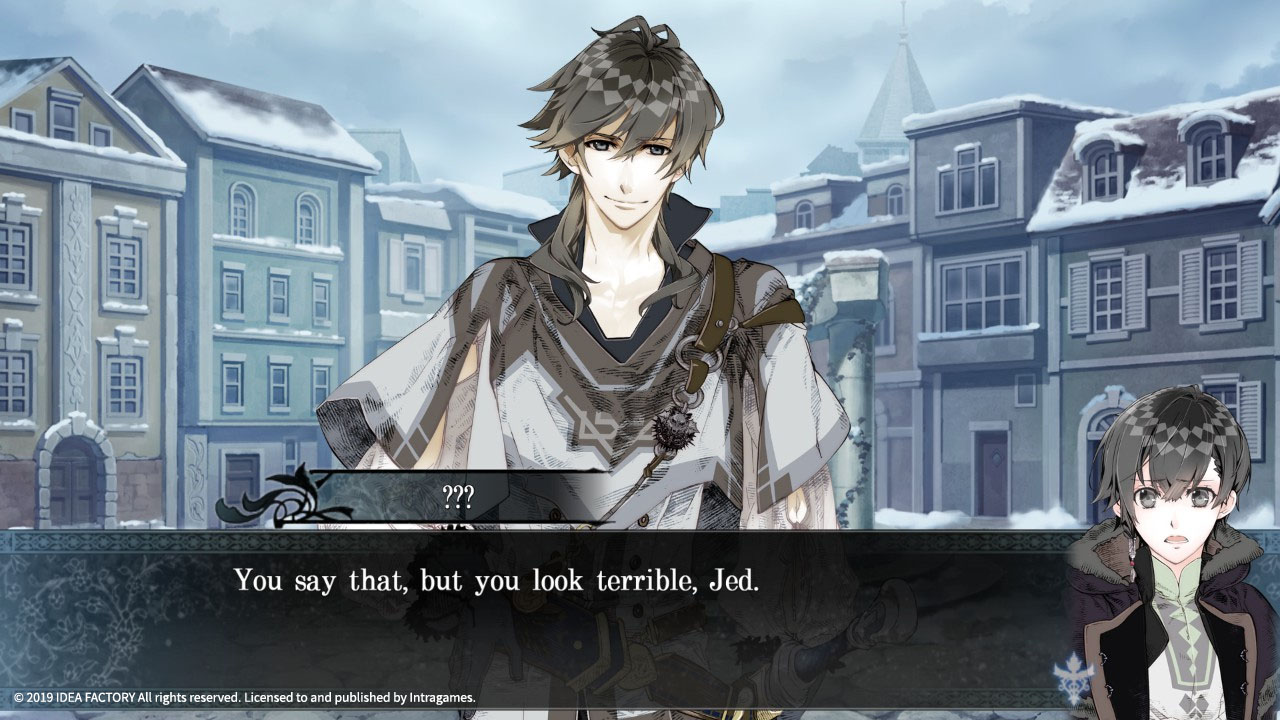 The music, as always in an Idea Factory game, is quite well done. It works very well and its absence is quickly noticed. It helps keep the mood flowing while not overshadowing the story being delivered. Most of the character lines are spoken aloud to you in Japanese. Each character sounds good, with their personalities clearly being voiced to you. The stern Hawk clan leader has a menacing visual to him and a voice that sounds very intimidating to match it. He sounds like someone who would just as soon stab you as to shake your hand. The exact opposite can be said for one of your fellow Wolf clan members. He is so peppy and vibrant with his pink hair and secret fondness of the main character’s male self. His voice actor couldn’t possibly have matched that better if they tried. Sure I still can’t understand a word they are saying, but at least the way they are saying it sounds like it should! 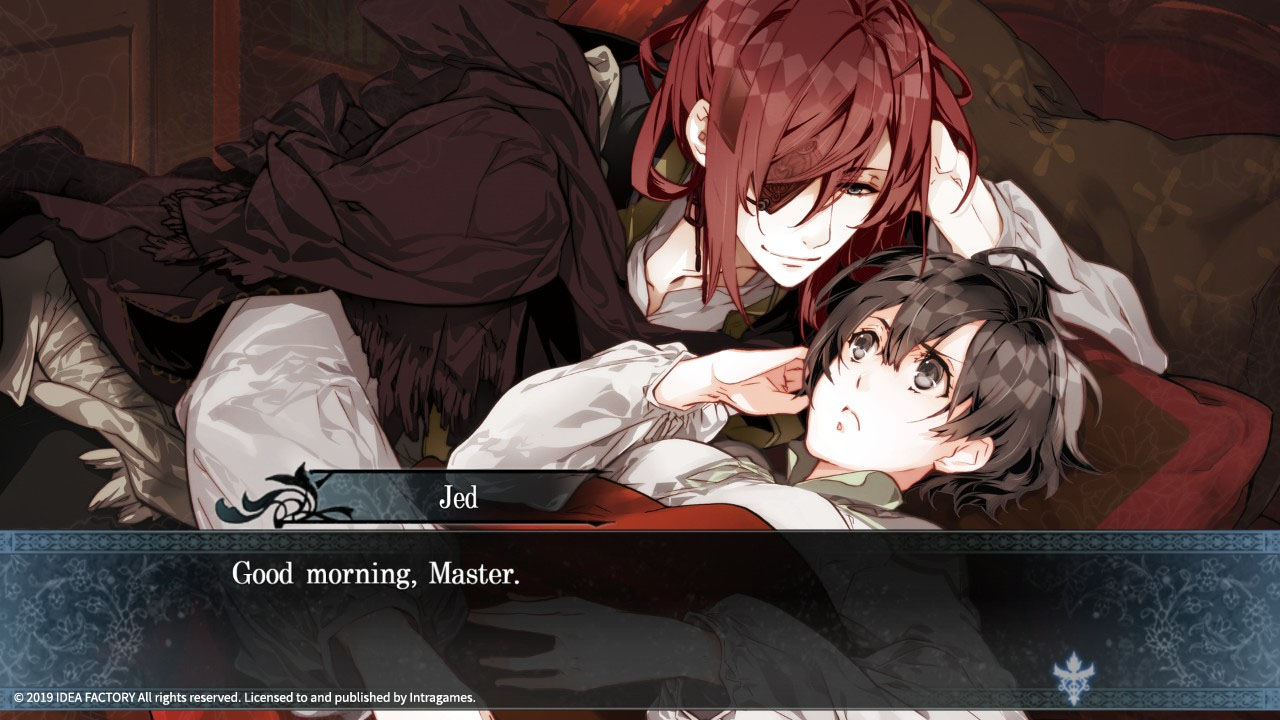 This is probably the only true negative I can give to this game. The controls are a bit convoluted. Yes, I am sure they seem sensible, and most likely they are, but they are a bit confusing at first. As you likely know, to review a game’s user interface and controls properly, I never rebind anything. I used a keyboard and mouse to play the game as Visual Novels typically don’t need you to bother with a gamepad. Once you get the hang of them, the default controls can work for you, but I did need to end up writing them down in order to avoid accidentally skipping text. The best example I can give you is that “j” is the Quick Save button and “;” is the Quick Load. While bindings like that are actually getting to be more common in these sorts of games, other more action style games have taught me to press elsewhere for those options. 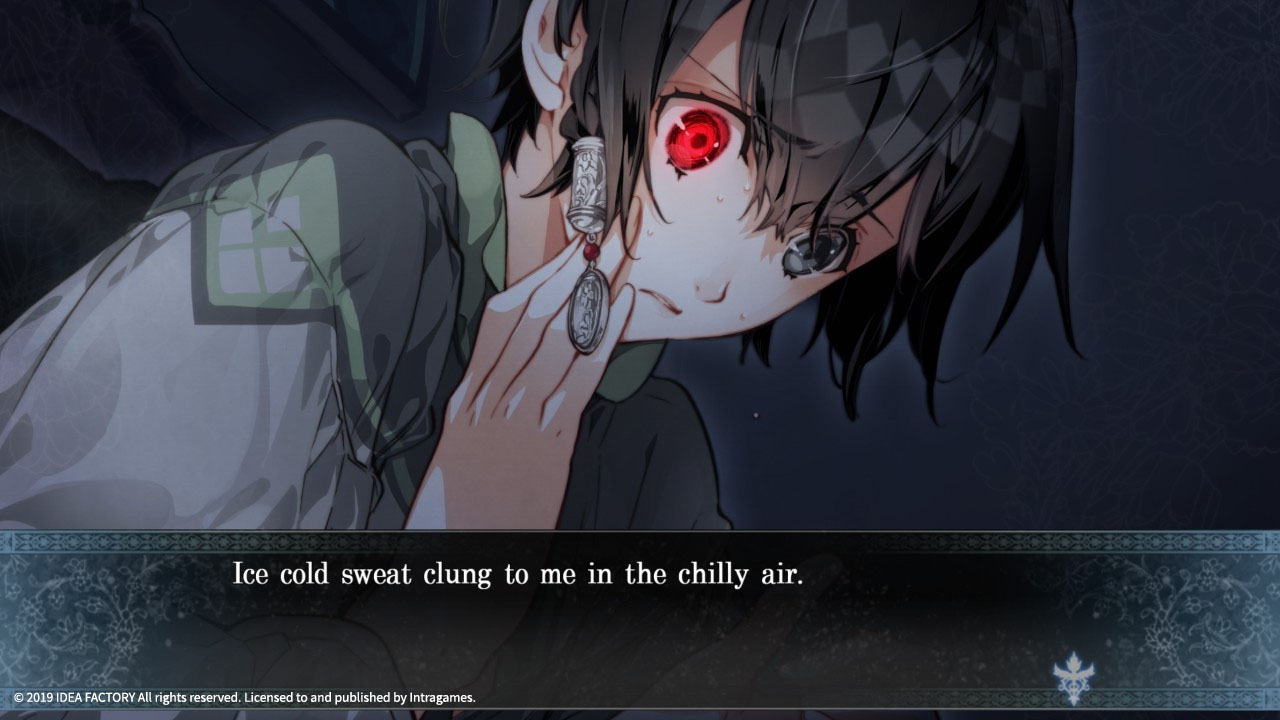 The User Interface besides the controls works very well. The pages are very easy to navigate once you find the correct buttons to do so. It’s very easy to tell where you still need to visit and where you have already completed all tasks for your current gender self. Switching between selves is a matter of clicking a single button and the game clearly shows you which self you currently are. One thing that is mildly annoying is that after you have completed a scene it defaults back to your male self, making you need to switch back to your female self if you wanted to pursue those stories at the moment. It’s not that big of deal but is a minor annoyance. 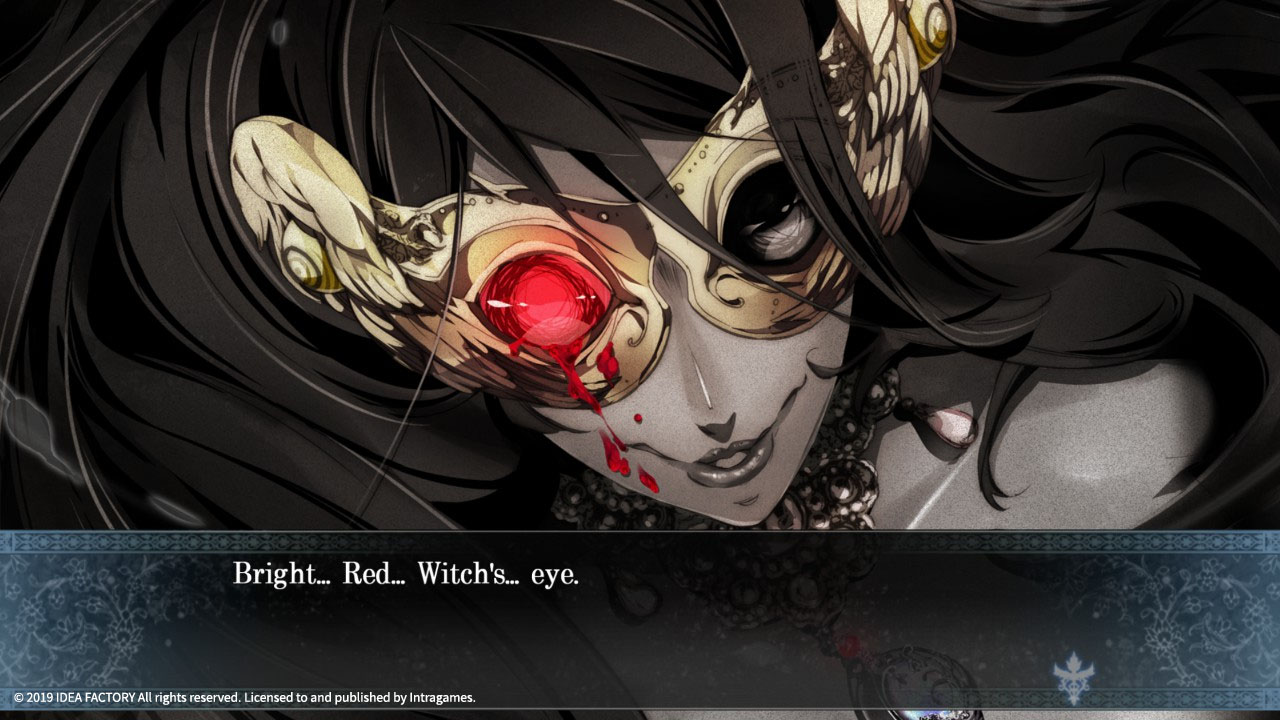 So, should you pick up Psychedelica of the Ashen Hawk? If you are a fan of Idea Factory’s visual novels, then you would likely want to pick this one up as well. If you are looking for a Visual Novel, even if you have not played any of the Idea Factory ones, this one is a great one to try. You don’t need to have played Black Butterfly to enjoy the story, so if you wanted to jump right into this one you can. Yes the two stories are linked and there are crossover elements, but not recognizing them will not hamper your enjoyment of the story. If you are looking for a purer Romantic Otome then Hakuoki would be a better choice. While Ashen Hawk still has those romance elements, they are really back-burnered until the later game. If you were a bit disappointed by Black Butterfly and a bit worried about trying the sequel, I have to say that I did like Ashen Hawk better. As per always when talking about Visual Novels, if you are looking for a game full of heart-pounding action, button-mashing or other interactive thrills, then this probably isn’t the game for you. If you are the kind of person who gets lost in a story, feels what the characters feel and can generally empathize with what is going on, then you should enjoy Psychedelica of the Ashen Hawk. Overall, I’ll have to save it.