Presenting one of the greatest 3D indie fighting game ever made

Note: No real crustaceans have been harmed in any way in this review.
Before anything else, yes it is a fighting game but I wouldn’t put it in the same basket as the typical competitive ones, yet. But above anything else, Fight Crab is just simple crazy fun. Don’t mistake crazy for random! It does have elements of strategy and reactionary moments. The sheer thematic obscurity gives it a leg up compared to all other fighters. It’s actually absurd that it’s better than it has any right to be.

The Story: The Crustacean Martial World

In this world, crustaceans were granted ultimate strength and intelligence. You could call them The Martial Crustaceans. Incredible beings that are able to use all kinds of human weapons. Mythical, Technical, Martial, you name it. They have it all! On top of all that, they are nearly immortal! They can’t be killed by conventional means. There’s only one single rule.

Those who are flipped onto their shells shall be cooked into crab cake or mouth-watering Rangoon.

THE POT is the grim final destination for all of those who are flipped over.
Despite the dangers. These brave crustacean warriors embark on a journey to become THE STRONGEST. 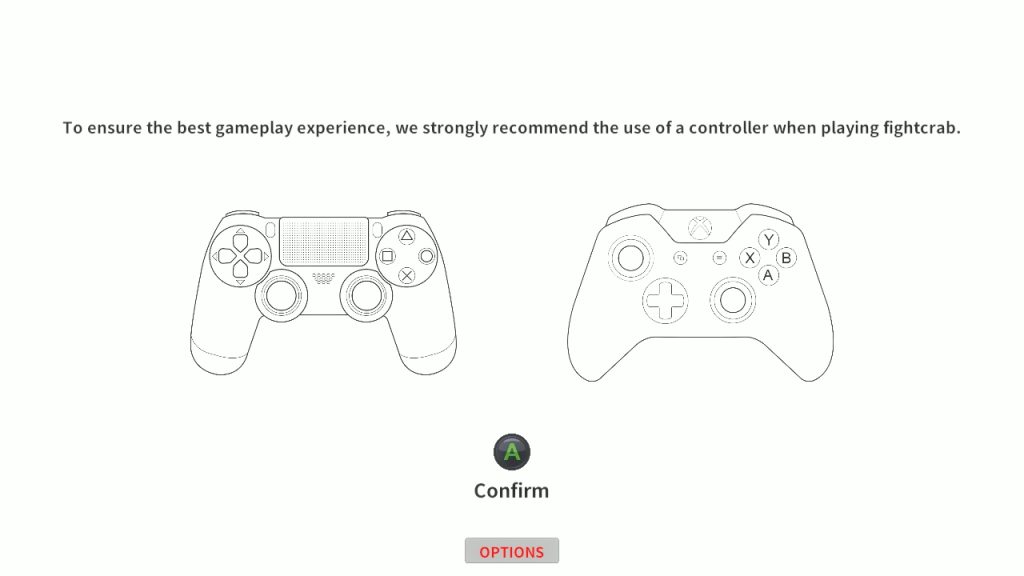 The controls are more complex than you would think but pays off by offering more freedom. First things first, it is recommended to use a controller to play Fight Crab. While it is possible to use Keyboard and Mouse, it’d be a real complicated deal. In this review, I used the Xbox One controller. Supposedly the PS4 Dual Shock 4 controller is also supported if you have one of those lying around.
To make it simple to understand here’s a breakdown of the standard controls.

D-Pad
Pushing the direction moves you automatically into the direction. By tapping twice you will execute a quick step. If you input a different direction you will just stop moving.

LB/RB (The shoulder buttons)
These buttons have multiple functions. Basically, each of them represents one arm. Here’s what you can do with them:
1. Close your pincer and block.
2. Grab ahold of your opponent and damage them by crushing it with sheer power.
3. Pick up weapons.
4. Weapon specific functions, like shooting the gun.

LT/RT (The Triggers)
Your primary button of attack. With the push of the trigger, your crustacean will put power into the corresponding pincer. On neutral stance, it’ll be a straight punch forward like a jab. Depending on your pincers position you can turn it into a swing or uppercut too. This also counts when you’re equipped with weapons.

X/B-Button
These buttons are used to let go of the item you’re currently holding. Here’s the kicker, when you punch out and hit the corresponding button you throw the object turning it into a projectile.

Y-Button
A special button that lets you walk on walls. Like a Ninja or Spiderman, but as a crustacean. 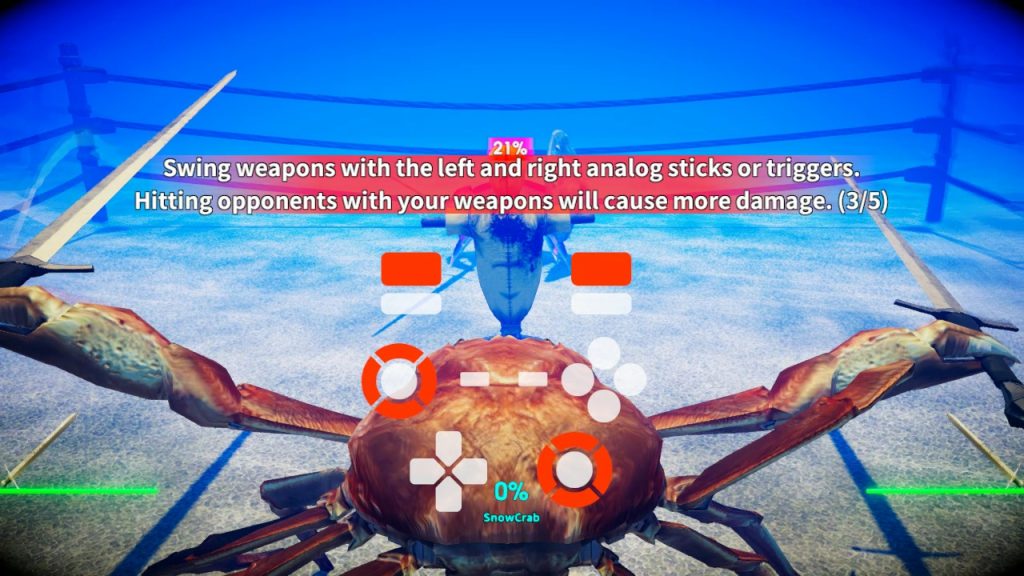 Both sticks control your crustacean’s arms. By combining this and the Triggers, you’ll be able to perform specific attacks by readying your pincers’ position. This is also the case when you’re armed. Turning it into a potentially more complex attack pattern when you use momentum-based weapons.
Clicking on them will tilt the camera and will lock onto the next opponent in sight. To unlock you just have to push both of them.

To put everything into perspective, you’ll be handling the arms most of the time. Though you’ll be forced to remove one of your thumbs to move your crustacean with the D-Pad. It’s not ideal and certainly not 100% intuitive but that’s how it currently is.
The ability to walk on walls feels more like a fun bonus than a big legit thing for you to use because a) you’re not finding that many walls and b) the walk on walls feels clunky. 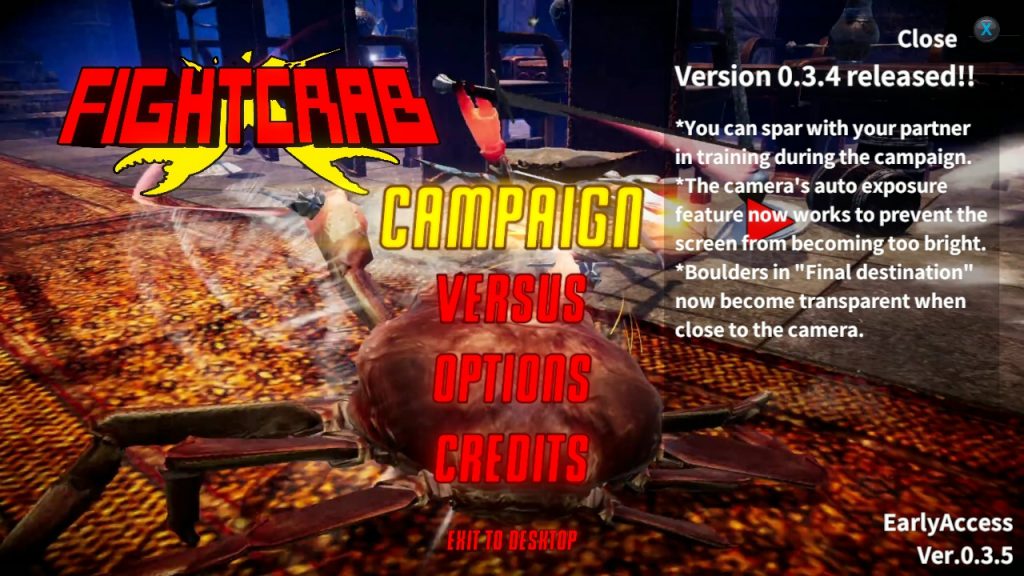 There’s a VS mode with up to 4 player split-screen, an online mode, and the campaign. The latter is where you’ll most likely spend your time on and has potential coop that can be unlocked. I wasn’t able to find any matches online or try local multiplayer, so this preview will be focusing on the campaign with a singleplayer focus. 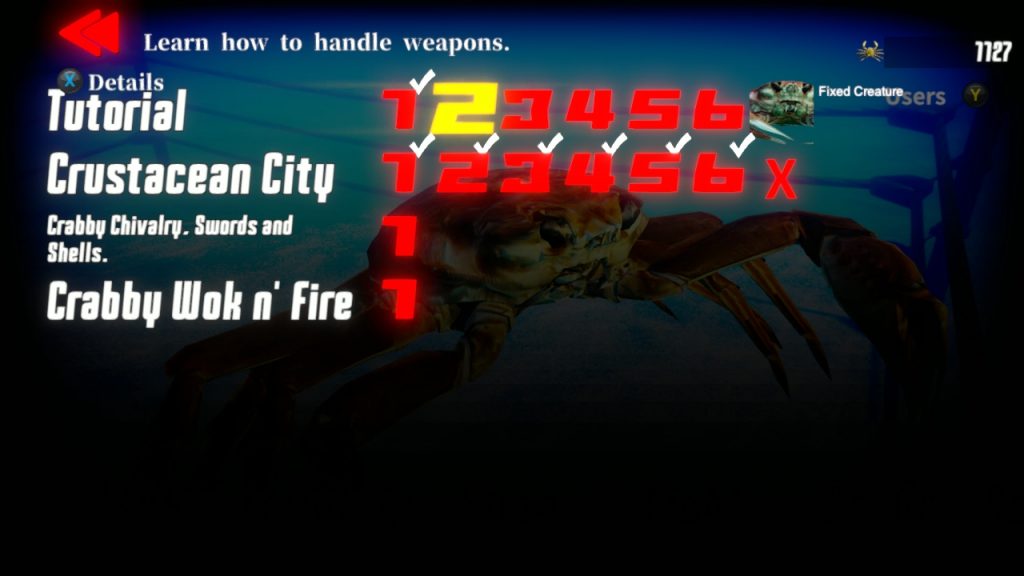 The basic set up is that it works as an arcade mode but with an RPG twist. You go from one map to another and run a gauntlet of opponents with a boss fight awaiting you at the end. Each fight will reward you with money that can be used to unlock new crustaceans, weapons or souls-like level-ups.
If you lose too much, you can call for a reinforcement that damages the opponent(s). It’s an Air-Strike by a Crab on a Plane.

You Goal: Flip’em Over!
As you can surmise from the Story, your goal of the match is to either flip your opponent on their backs or push them out of the ring.
In a sense, it has something from Wrestling and Super Smash Bros because of how the system works. There’s no life bar and in its stead a damage percentage that you can rack up indefinitely in theory. The higher the damage percentage the more likely it is to get flipped over. Once it happens there will be a three count, you can pick yourself up by punching but after each subsequent successful try, it will become harder to save yourself from THE POT.
With the goal established let’s take a look into how the fighting feels.

The Fighting
At first glance, it can seem random, which isn’t the case. There were moments where I specifically moved at a certain distance to keep my spacing and hit my opponent from a safe distance. You can pick up items such as palms or cars that are lying around and use them as weapons, which is a nice touch.
The fighting would be pretty basic if it weren’t for the various amount of options such as 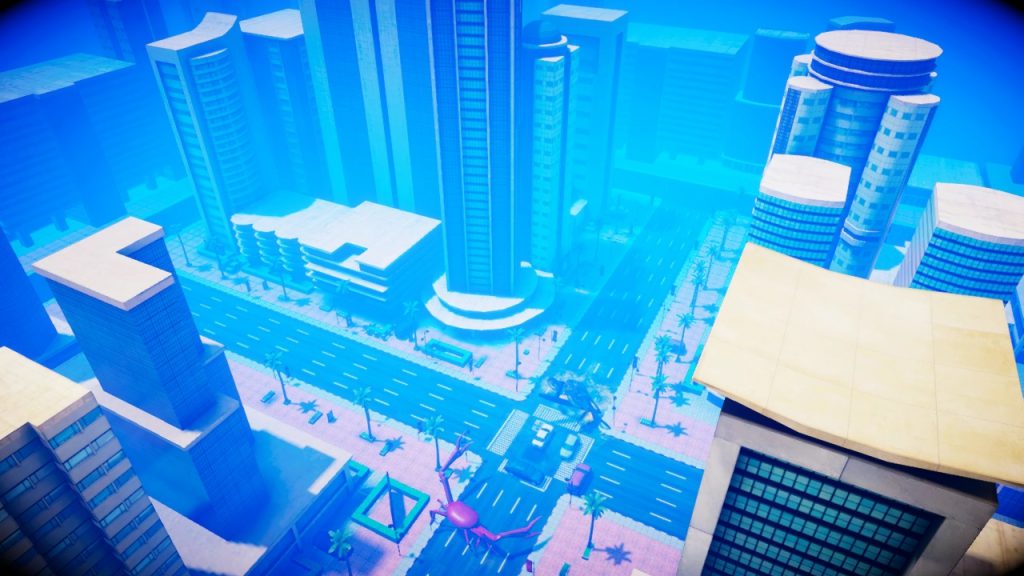 Because the human world is a mess you will start your experience with the tutorial Under the Sea in a ring. Once you find yourself ready, you head out onto the city where you can climb buildings or use palms and cars as weapons. It doesn’t stop there. Expect places like a medieval room, a Chinese restaurant table or a supermarket. Each of them will bring you a much different fighting experience. 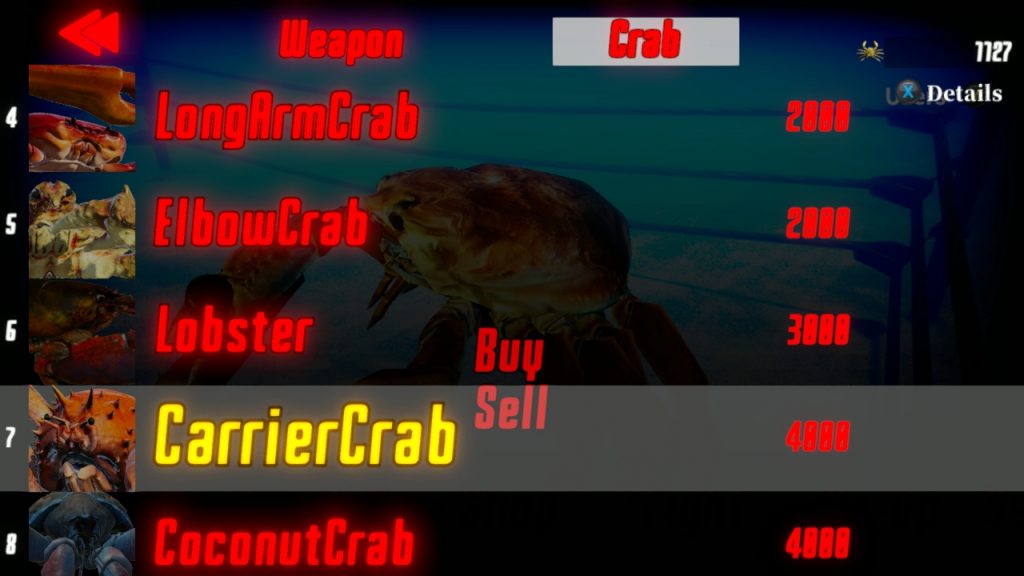 Choose your destiny! Snow Crab will be your first fighter but once you get some cash in you’ll be able to buy more as long as you unlock them by finishing up your gauntlets. Going from normal crabs such as BlueCrab, Calappa, LongArmCrab, and even bosses! And of course, we can’t miss the ancient crabification of patriarchy: The Lobster.
All of them differ in various stats like weight, speed (in cm/s), reach, acceleration, etc.

If that isn’t enough for you, then Mr. Tough Customer, we’re heading into the next major topic 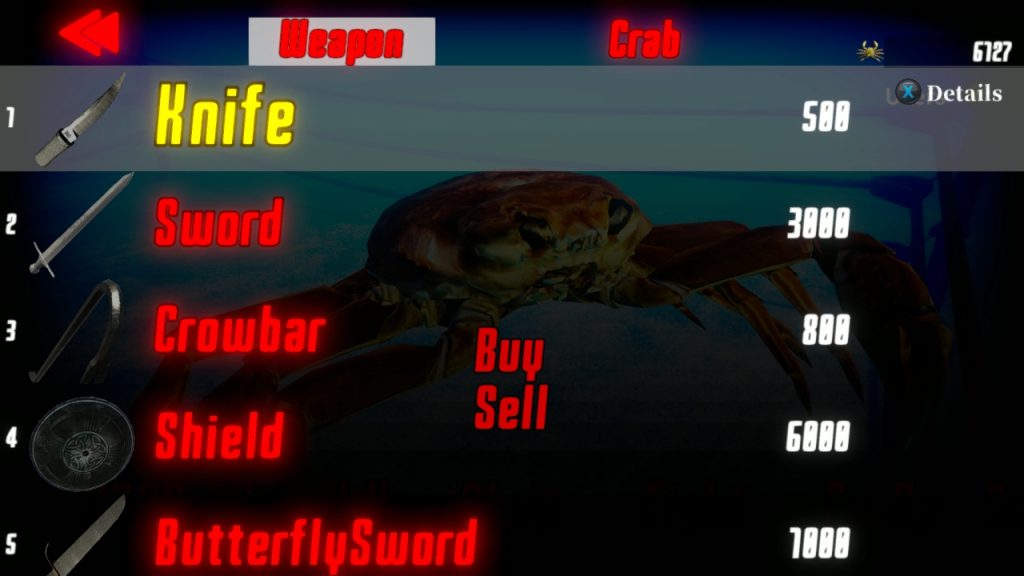 What? Crab and weapons? It’s true and it’s incredible. We’ve already established that these creatures are able to pick up stuff and use them lethally but that’s the normal things. This topic is about bonafide weapons.
Ok, weapons… It doesn’t sound too special. Yeah, I agree. In the beginning, you only have a few options like a cheap knife, a tonfa or the infamous Crowbar (Half-Life 3 hint?!). The further you go in the campaign the more you unlock. What can you expect?
Guns! In the form of revolvers and something else… and you have infinite ammo but you still have to reload.
A spiked Bat (Lucille?), Rapiers, Nunchucks, Sai, Hand Axes, Mace and even Two-Handed weapons like a Claymore.

There are also more mythical weapons like a Shield that returns to it’s owner after successfully hitting your opponent making you feel like Captain America, a Hammer that returns to the owner as well and hits hard like Thor, the Two-Handed Excalibur that can blast your opponent like Arturia in the Fate series in Hyper mode (more about it later).

Then there are technical marvels such as the Chainsaw, Jetpacks, Drills with rocket boosters and even, I kid you not, Lightsabers! Yes, you can dual wield them like in Episode 2 or if you prefer Darth Maul you can even purchase a Double-Bladed Saber and yes it’s true… you can activate and deactivate them. Because otherwise, they run out of energy.

These weapons are not omnipotent because all of them have a stamina bar and once it runs out you will drop them. Quick-witted opponents can even nab the weapons from you with great dexterity.
After taking like 50% damage you will get access to the 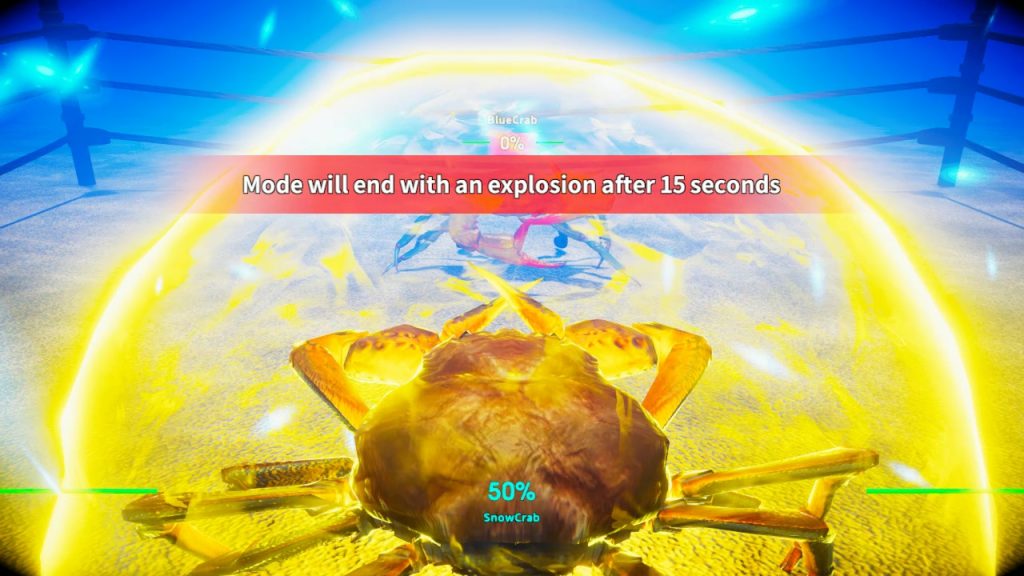 When you’re further along the campaign. The Hyper Mode renders you unflippable and buffs you up. When it finally runs out you’ll activate an explosion that damages your opponent. Some weapons have their own Hyper moves like the Excalibur or the Drills Assault Mode and then there’s the universal 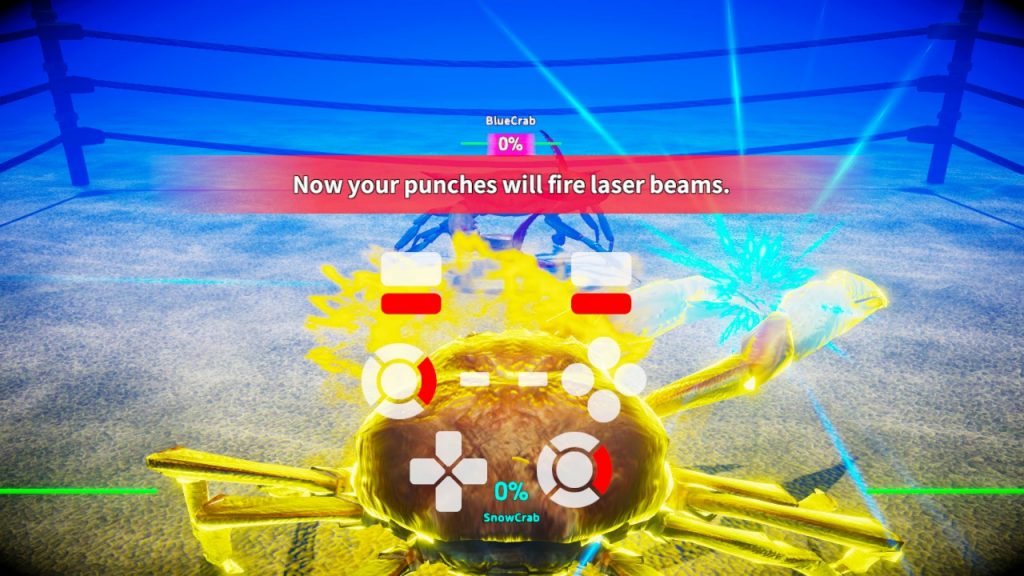 It’s a wordplay to the Kame(Turtle)hameha. By moving both your pincers to the right side and punching after charging you will blast out a blue beam that dishes out some real hurt. As you can surmise, it is actually the same movement as the renowned signature move of Dragon Ball finalizing the homage. 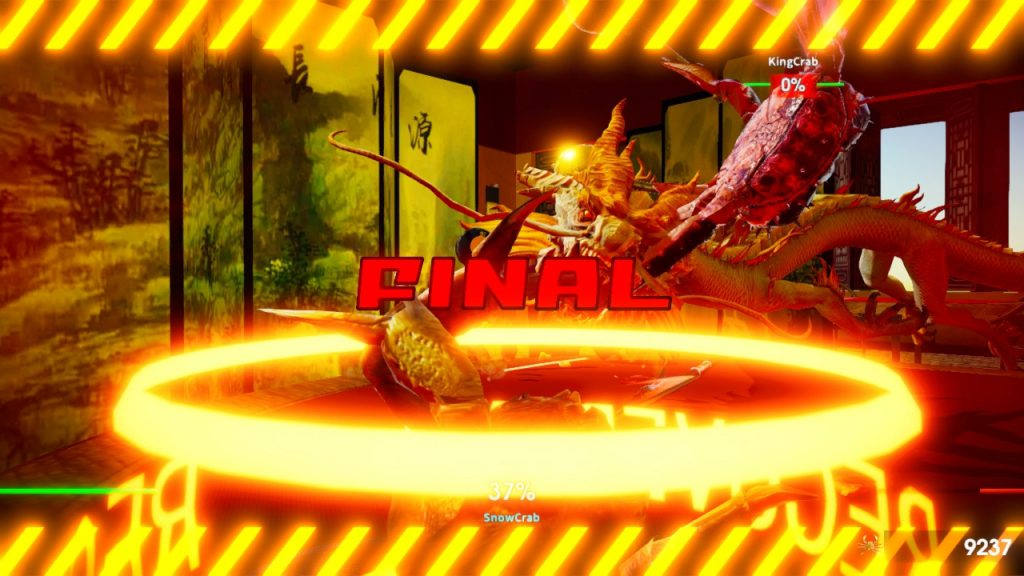 The graphics do their job and if you take into account how messy things can get with all the items strewn across the fighting grounds it does give the game a certain flavor. Exploding cars, weak weaponized Salmons that can get sliced in half, palms, plates, oversized chairs and much more bring a ton of character into the action.
Then there are the additional flourishes of appearing enemies. Many of them just drop from the air with an explosion, in the medieval map they drop with the chandelier and in the Chinese restaurant the boss blows past your expectations by appearing RIDING A DRAGON that makes it rounds outside of the ring, while you’re fighting.
It sounds absurd, it looks absurd, it’s great. It doesn’t look graphically special but it does a lot to fight its way into your heart.

If you watched the trailer you know it’s serious business and gets your blood pumping. It tries to give its own spin on the different themes of the maps and really helps you get into the match.

Fight Crab is pure unadulterated fun but doesn’t come without shortcomings. The variety of crustaceans, crazy weapons, and maps with heavily different themes are giving the game some serious fire. Considering the option of (couch) coop it gets an optional extra fun too.
The gameplay feels kind of clunky when you are trying to use your pincers to grab or try to execute some specific moves. This becomes even more apparent when you start using Two-Handed weapons because you will be at a loss on how to move them. Granted, once you master the pincer movements I can imagine some really slick choreography and attacks but I personally had a hard time getting used to it. It’s still intuitive enough to get the wins in.
Then there’s the movement. I often forget to control crustacean when he’s walking because I use all my focus on the pincers.
It might sound like there many negatives but the temporary rating of Save should say it all. I had a blast with the game and made me pump my fist more than expected. Considering that this is still Early Access, I have a lot of hope in this game.

Currently, it’s only available on Itch.io as an Early Access and has very frequent updates, but it seems like there are plans on bringing it to Steam at some point. Keep an eye out on it!