Buggin’ out… in the best way possible.

For those of you wondering if you need to play through the previous games in the franchise, you don’t. This game is more a retelling rather than a continuation.

There are loads of co-op games to get into nowadays, from Deep Rock Galactic to Remnant: From the Ashes, there’s always a good time to be had in the company of some good friends. While Earth Defense Force 5 is no exception, it is a bit of an enigma. It’s another janky, arcadey action shooter Japanese game that tends to go above and beyond in its outlandishness. You’ll be running (a lot) and gunning (even more) across 110 different levels playing as one of four different classes. The first being the Ranger, a well-rounded class that uses “traditional” military weapons. The Fencer is a beefier, dual-wielding and close-ranged living wall. The Wing Diver is the only class that can fly without a vehicle and uses primarily energy/laser weapons, all of which rely on her power core. Finally, the Air Raider is a primarily support class, while his weapons are limited, he makes up for it with a wide range of gadgets and vehicles to choose from, as well as the ability to request gunship and missile strikes.

The game’s story is fairly simple, the earth is being invaded by an alien force and your job as the Earth Defense Force is to… well… defend the earth. The more you resist this alien force, the more enemy types and technology appears. The story fleshes out slowly over each level, small snippets of context and information about current events in the world around you are told via your squad, your command center, and snippets of the occasional radio broadcast.

Earth Defense Force 5 boasts a wide variety of weapons, with each class getting their own unique arsenal to choose from. In order to get more weapons, however, you have to play the game. Weapons (as well as health upgrades) are dropped by the enemies you kill in the form of crates. The weapons case can upgrade or unlock your weapons (what you get is reliant on your current mission level and difficulty), armor cases can upgrade your maximum health, and finally, health packs are pretty self-explanatory (you’ll need a lot of them…)

One neat feature they’ve added compared to previous games is that armor and weapons you get after every level are shared across all classes with the class you’ve chosen getting a larger share of those items. This makes switching between classes much less of a hassle as you don’t need to go back and replay older missions just to get some more weapons for another class. 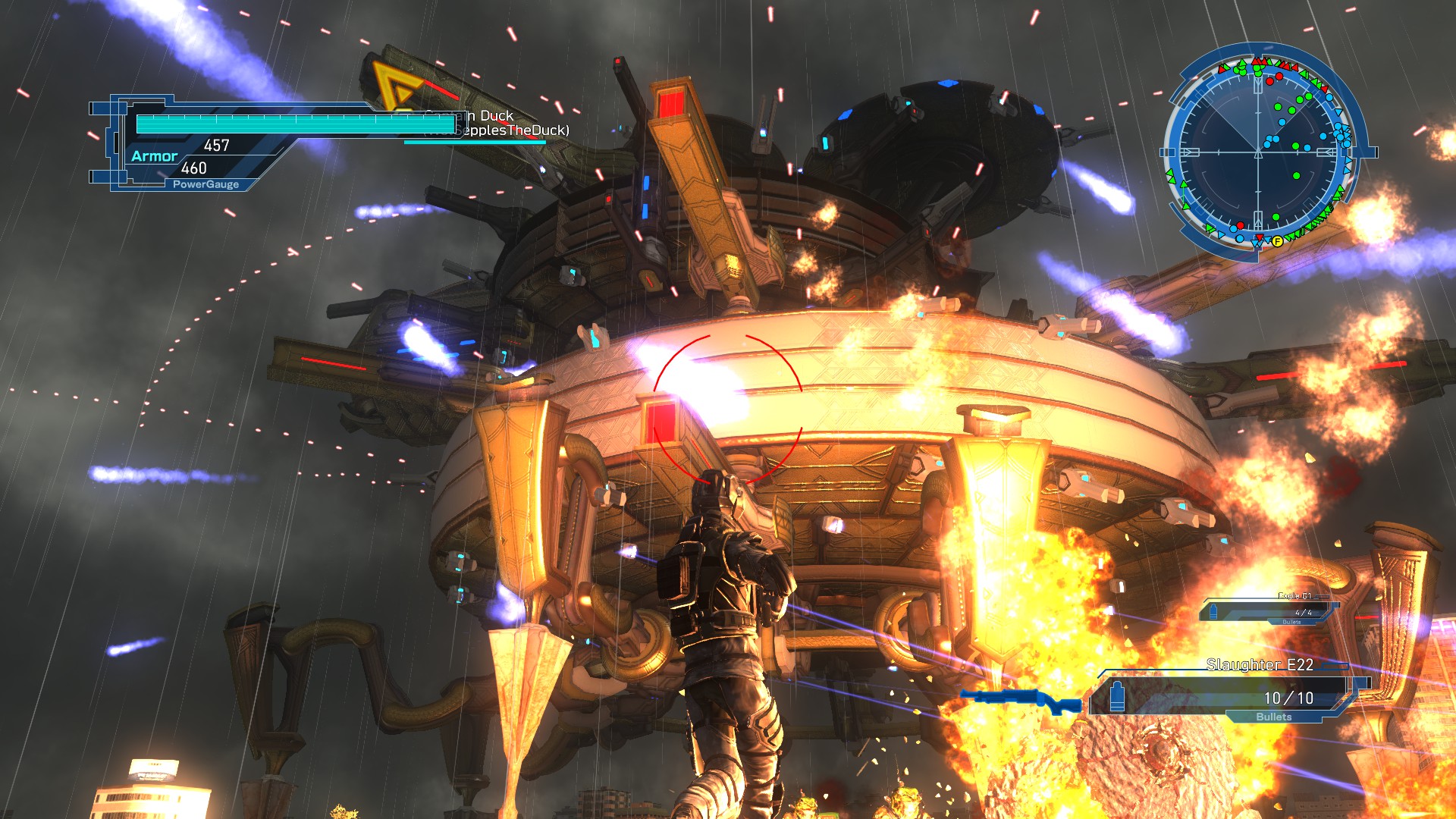 One of the most insane experiences yet

Chaos is this Earth Defense Force’s strong point. Massive hordes of acid-spitting ants, gun-toting frogs, and swarming drones overrunning your squad, the sounds of your allies screaming and shooting whatever they will be a common occurrence. Though for me the game shines brightest when you’re facing the larger threats. Things like a giant lightning-breathing kaiju and a massive walking fortress with enough guns to make the worlds deadliest and most intense laser light show are, in my opinion, definitely the game’s highlights.

One thing that this game does especially well are the over-the-top weapons that both sides are given, and even better, the explosions some create. Explosions are VERY frequent in this game, regardless of who you play. Somehow something is getting blown up, and everything around the explosions is ragdolled away and often ragdolled VERY, VERY FAR AWAY. I can’t help but laugh every time I’m blasted from one side of the map to the complete opposite.

Earth Defense Force seems to have a bit of a problem with dialogue as well, though the problem is definitely in the script itself rather than the delivery. There are loads of awkward, corny, or misplaced lines, but I feel it complements the game’s vibe completely, making it feel even more like a cheesy 80’s monster film. The best examples of how hilariously bad the dialogue can be are when people react to something. Whether it be something that they’re told over comms or something happening in the mission itself, there’ll always be someone blurting out something that had no right being as asinine as it is. Though I won’t rag on the voice acting too much as some of it can be perfectly fine, though the keyword there is ‘some’. 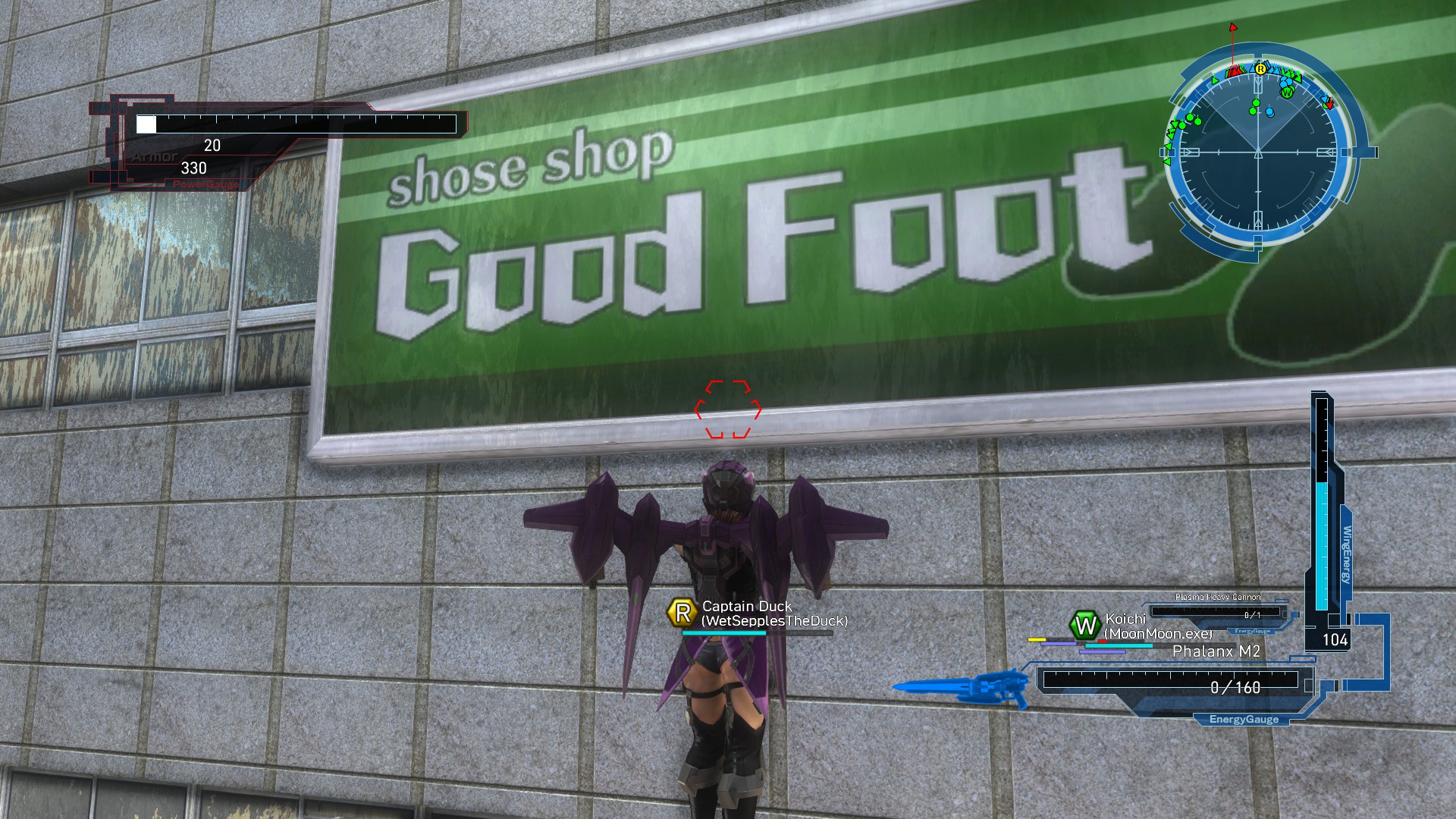 (Ironically) Not a buggy mess

When it comes to the technical aspects of Earth Defense Force 5, it seems to be a well-functioning game. There are very minor gripes here and there, one noteworthy gripe being that the NPC allies tend to be a bit… off at times. They’ll follow you pretty closely and they tend to jump a decent amount, typically around objects that they wind up walking too close to. This usually isn’t a problem but when you’re firing off a missile and the ranger off to the right decides to play invisible jump rope, the chances of them getting that missile to the face and blowing himself (along with you) to smithereens. One other genuine glitch I’ve noticed is killing a frog that happens to be close to a building (which will happen often) can potentially result in the crates that spawn to be dropped inside the building itself, which can be a bit difficult to acquire if you’re not a wing diver and the crate happens to be a few stories up. Of course, this problem is easily solved by just blowing the building up.

In terms of performance, however, it seems to be a mixed bag. The game runs perfectly fine for me personally, with little to no performance dips in even the most intense of fights, the only exception being a very small moment when the game freezes completely. It isn’t a very frequent issue either and has only happened twice in 30 hours of play. Hardly anything to worry about, though my friends (using relatively higher-end laptops) have had issues regarding framerate. I’ve been told their performance while in fullscreen is barely functional, yet keeping the game in windowed mode at least mostly fixes the issue. Looking online, there’s a handful of other people that seem to have a problem with performance (both laptop and desktop alike) so it seems more like a 50/50 chance of you getting a fully-functioning game. 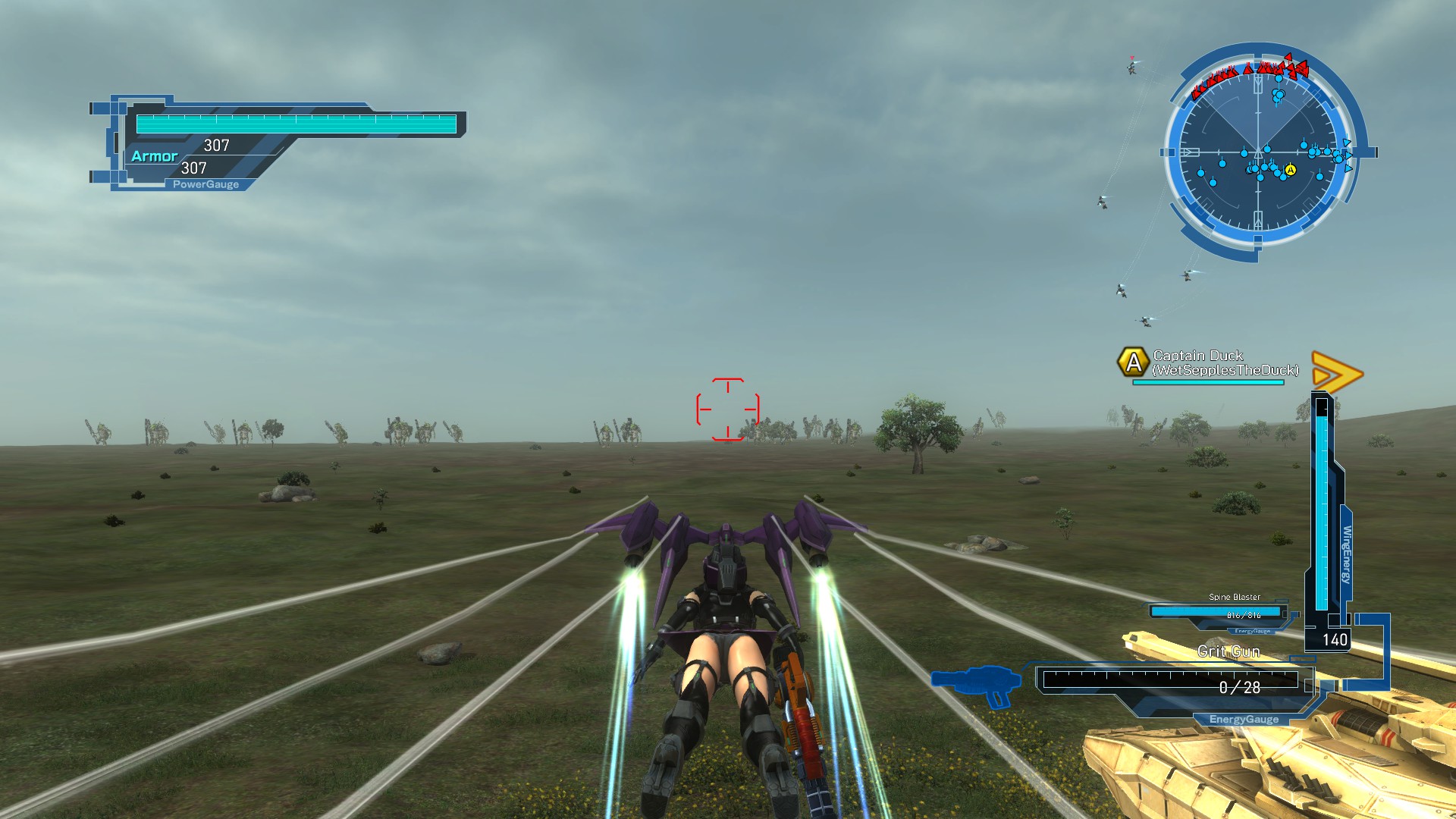 Earth Defense Force 5 can be really difficult at times, even in the earlier levels, and it really feels like Sandlot missed the mark in balancing these levels. It’s an uncommon occurrence to have to retreat to swap weapons or classes as the game doesn’t often tell you what you’re fighting or what to expect. However, some of these missions can be quite ruthless regardless of what you choose to combat it with. Whether it be due to horde of enemies that are quite difficult with the weaponry you have on hand or due to the enemies themselves. There are certain enemies that can both take a chunk of your health and slow you down to a halt which, under unfortunate circumstances, can result in a horde of insects catching up to you and overpowering you before you have a chance to fight back. One level in particular (level 40) gave me and my friend an incredibly difficult time, taking up to 3-4 hours of our time trying different strategies and trying any and all weapons in our possession that we thought could help, only to have so much happening around us that we get blindsided by anything and everything. Eventually, we powered through and (with the help of two strangers) ended up victorious, finally able to move on with the game.

The Wing Diver is fun to use, being able to fly around and perform dive bombings on a horde of bugs is great. Unfortunately, a lot of her weapons are incredibly lackluster, either due to it being horribly unreliable, extremely low DPS, or both. There is a new mechanic compared to previous games where the Wing Diver can charge her weapon before firing it (rather than charging it when you need to reload) and a handful of decent weapons got ruined by adopting it. The charge mechanic isn’t innately bad, as there are some decent weapons that use it, but for those that have played any previous games, you might be a tad disappointed.

Screen shake starts off as on in this game, which might be fun to have on the first few levels, but it gets old really quick. As I said before, Earth Defense Force 5 has a lot of explosions and massive impacts from the larger monsters, and the more of them that occur at once, the worse your screen shake is. While a large hindrance on the gameplay, this is a very quick fix, as the option to turn it off is in the escape menu, available at any time. 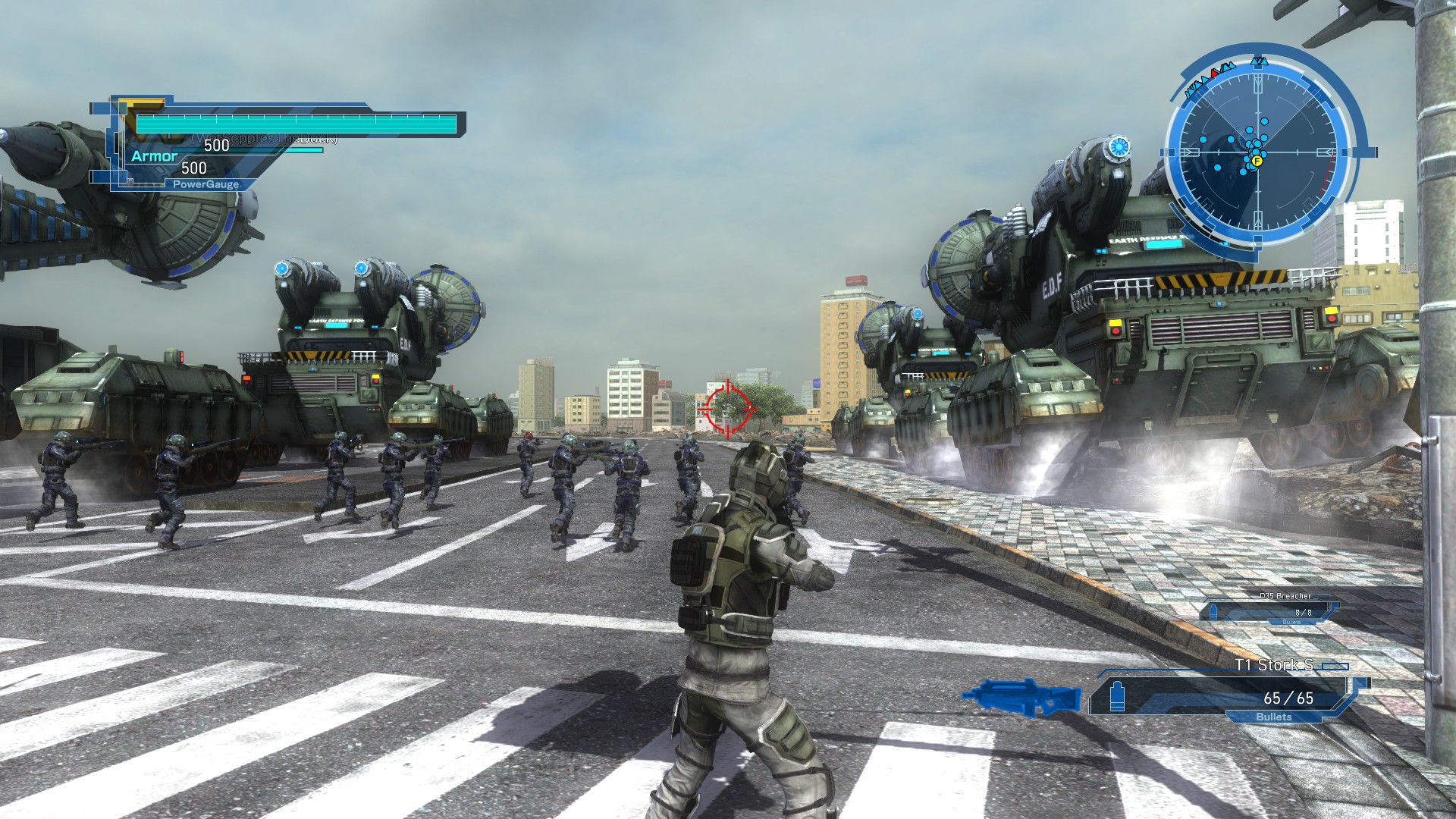 This game is wonderful, it’s wacky, it’s cheesy, and it’s everything I’ve ever wanted. Fighting giant monsters, flying around pantsless shooting lightning from your gun, piloting battle mechs, all while laughing at how terrible the dialogue is. The problems that I have with this game can be easily overshadowed by the sheer fun and chaos that this game certainly provides. I certainly recommend this game, though you might run the risk of the game not functioning as well as it should. However, if you have a decent desktop computer (or if you want to risk it on a laptop) and have a love for a high-chaos, low-budget monster shoot-em-up, then this game is perfect for you!