Open world survival RPG with story-driven quests. Complex crafting system, menus galore and somewhat clunky combat. Tons of ingredients but the final dish was not to my taste.

Outward is an open world survival RPG. You’re given quests to tackle and you have to roam the open world looking for clues, fighting NPCs and generally trying to stay alive.

There’s a rich crafting system with tiered items – you have to use raw materials to craft basic items, and then you combine basic items to make higher tiered items. So this means you’re always picking up anything you can find in order to craft stuff, and your inventory soon fills up. Unlike many games where you have a certain number of slots in your inventory, here it works on weight. Every item in the game has a weight, and your character has a weight limit. The heavier you are, the slower you move. Eventually, if you go over the limit you end up rooted to the spot. The first few times this happened to me I’d forgotten about the weight and thought the game had frozen! It’s quite disconcerting. 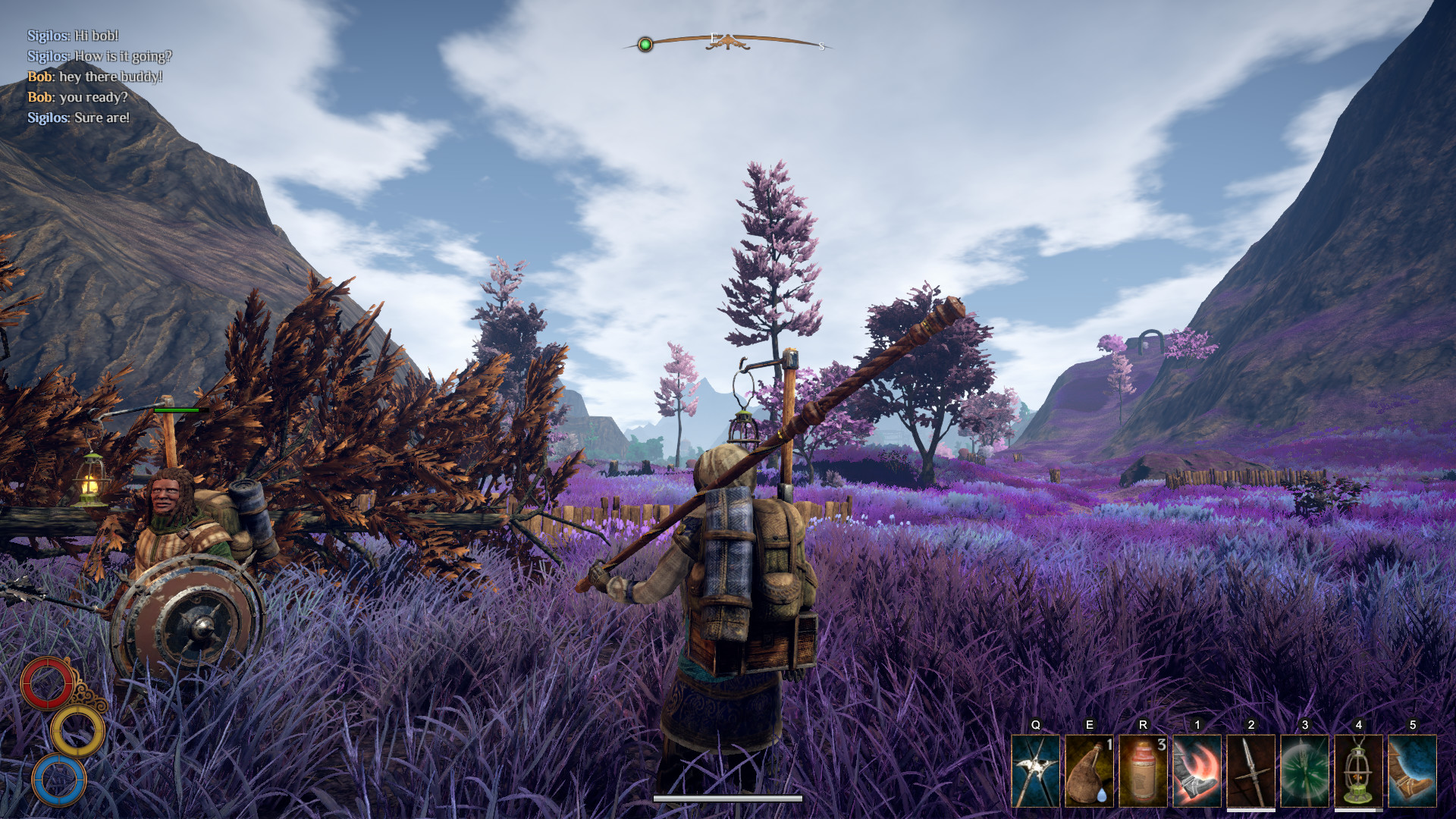 Survival aspects are taken very seriously. There are all kinds of ‘effects’ that your character can suffer from: fatigue, hunger, thirst, heat/cold, disease, injury… you name it. There’s a health meter that you really have to keep an eye on, and much of the crafting you do is geared towards satisfying your character’s constant needs.

The story-driven quests are one of the things I like best. You start off in a village and you go around talking to various people, culminating in your first quest which is to go forth beyond the village gates into the wide world to make enough money to pay off a debt. The world map seems large and there’s a fair amount of time spent walking, with bandits and beasts to defeat on the way. Levelling up is done by paying people to train you in new skills, but finding money is not easy so I’m still a poor weakling. 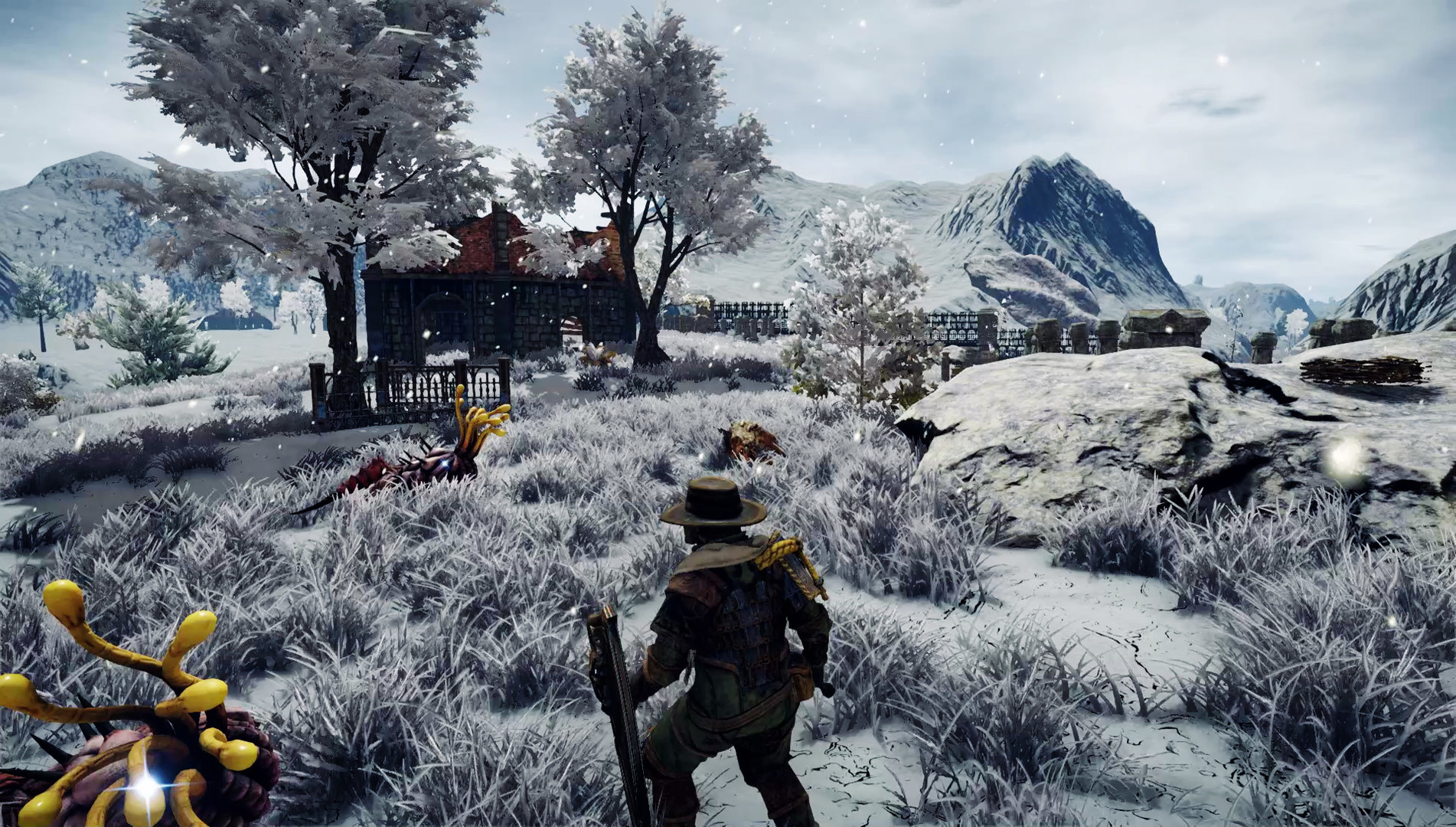 The environment is not quite as lifelike as Rust (that I’m addicted to), but it’s pleasant and detailed nonetheless. The weather effects and day/night cycle are good for the immersion (nice moonlight scenery). I think the optimization could be improved – my GTX1070Ti struggled with Ultra, I had to turn the settings down a little bit. Not a serious issue, but worth mentioning.

When you’re talking to a NPC you get the usual text boxes with multi-choice responses, but it’s random whether or not the character speaks. Even when there is voice, it doesn’t always entirely match the text. It’s a shame because, when it appears, the voice acting is very good. It’s just incomplete and sloppy. 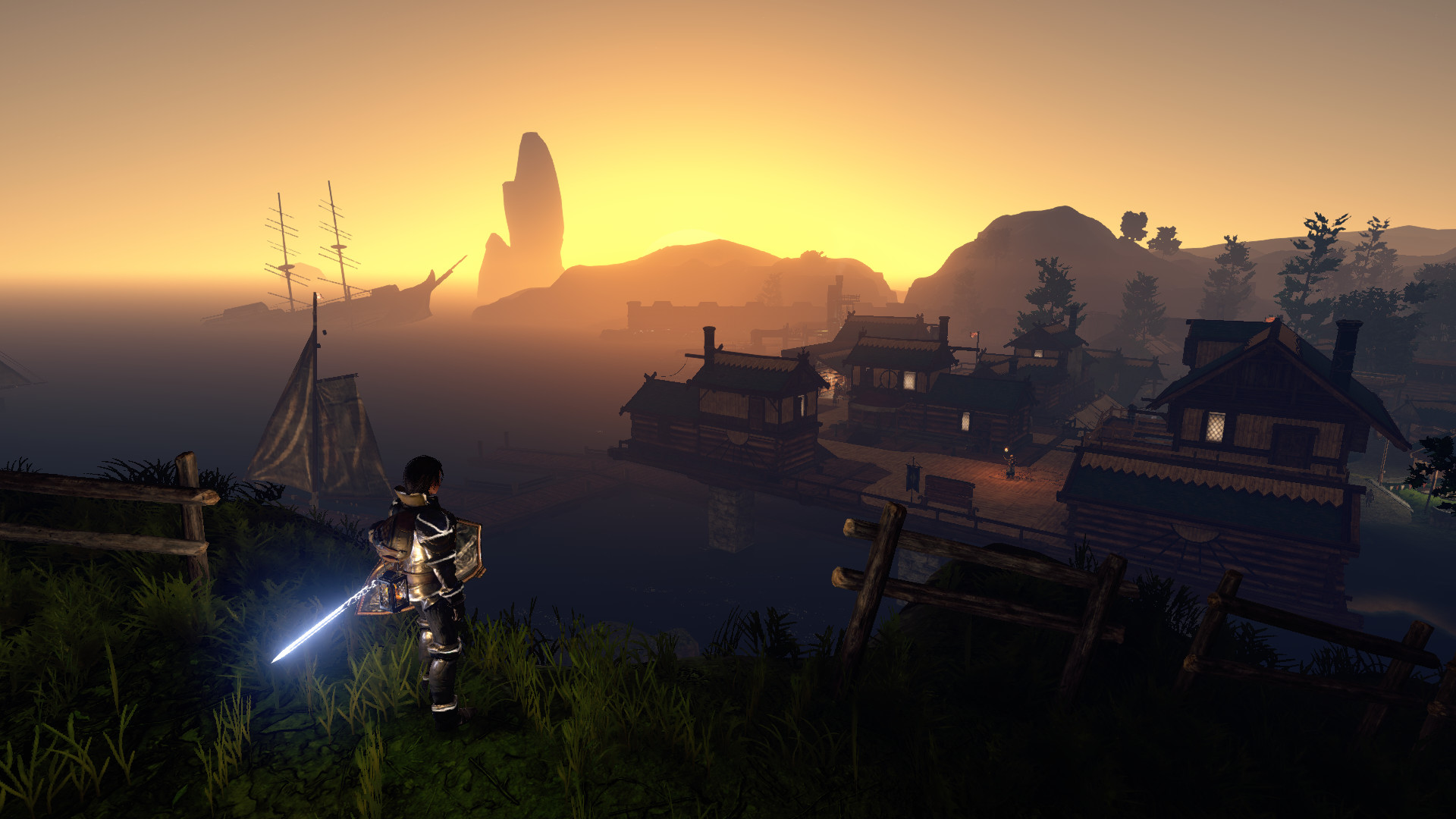 You have various weapons, shields, armour and so forth that you either pick up or craft. The tutorial shows you the various combat methods. To melee you ‘lock’ onto the enemy using tab and then you can left-click-hit, right-click-parry and middle-click-special-attack. You can also run away or roll-evade using the spacebar – this feels really weird, I mean spacebar should be for jumping, right? Spamming attack will cause you to quickly run out of stamina, so you can either spam and run away to recover or else be more careful with your strikes. Then there are magic spells that you have to concoct with the crafting menu, and these are used in conjunction with special attacks. There are ranged weapons too but I haven’t had a chance to use one yet.

After dying you respawn somewhere else with basic gear. There was a time when I got stuck in a loop of waking up in a village and getting re-killed by the bandits there. I managed to escape in the end after several attempts, but I did wonder why the game would respawn me straight back into a dangerous environment right after I’d just died.

I have two things to say about the combat in general. First, I do like the concept of the melee mechanics, but in practice I found it to be rather laggy and unresponsive. I don’t know if this was due to my character not being speed-upgraded, or if it was the normal gameplay or even my graphics card (I doubt it). Secondly, the magic spells are too complicated. Even once I get used to it, there’s no way I’ll be able to remember how to use the methods and combos for all the different spells, especially in the heat of combat. 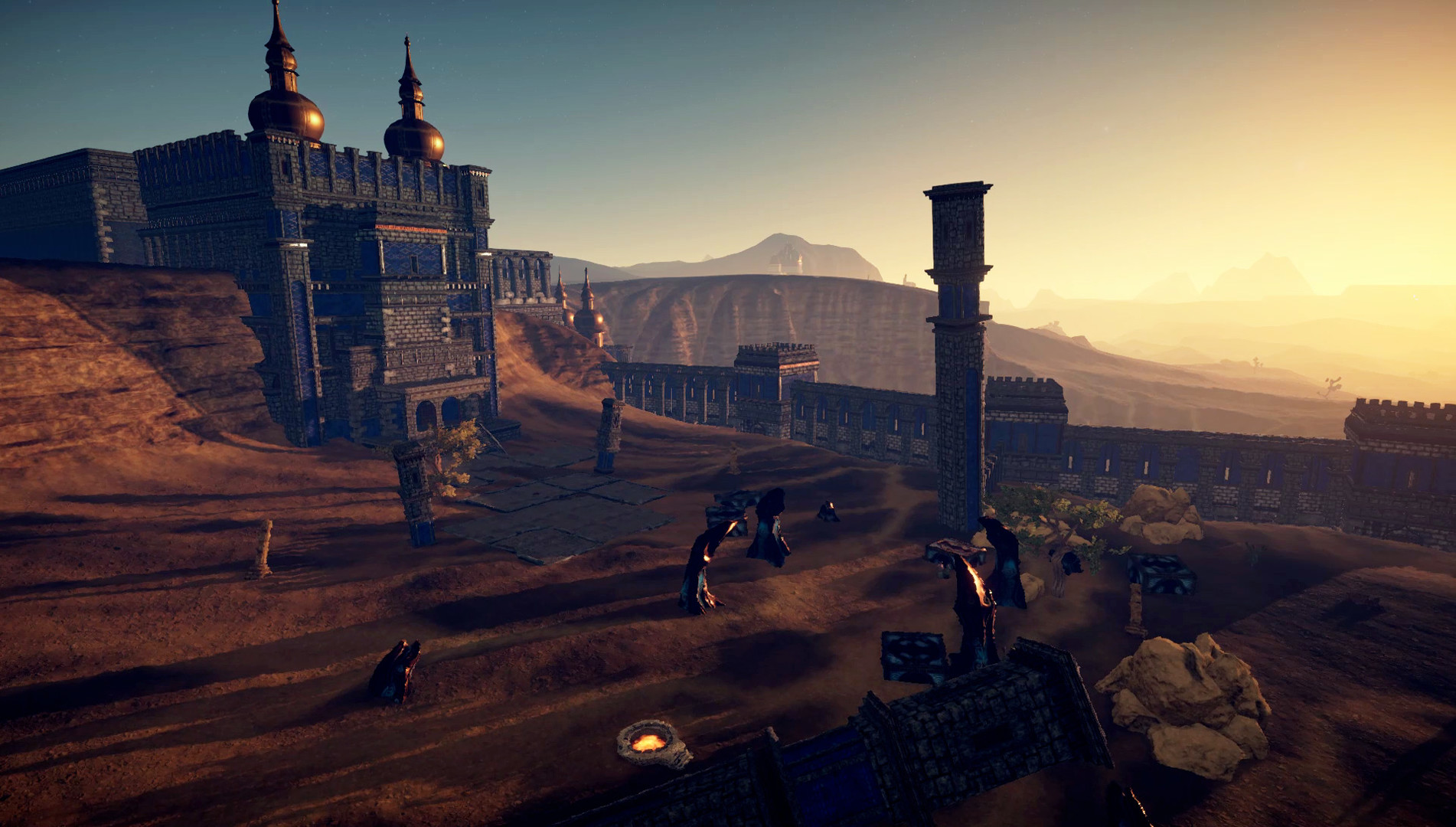 I’ll admit I’ve found this game unintuitive and difficult to grasp. I had to make several attempts to even get through the tutorial! You’re bombarded with a bewildering array of menus, keystrokes, item types and concepts. If you’re familiar with this type of game then I suppose it might come easier, but to an RPG novice like myself it’s baffling to say the least.

I’ve managed to gain some control over the game mechanics. I can catch some trout and build a campfire to cook it for example, but even after several hours of gameplay, holding (what I assume to be) a decent weapon I promptly die whenever I meet any type of enemy. Surely the game should allow you to gain a few small victories over some puny foes to start you off and give you a bit of confidence?

Once you gain enough knowledge and gear to become comfortable I’m sure things become easier, but for me the initial learning curve was too long and frustrating before reaching that point. 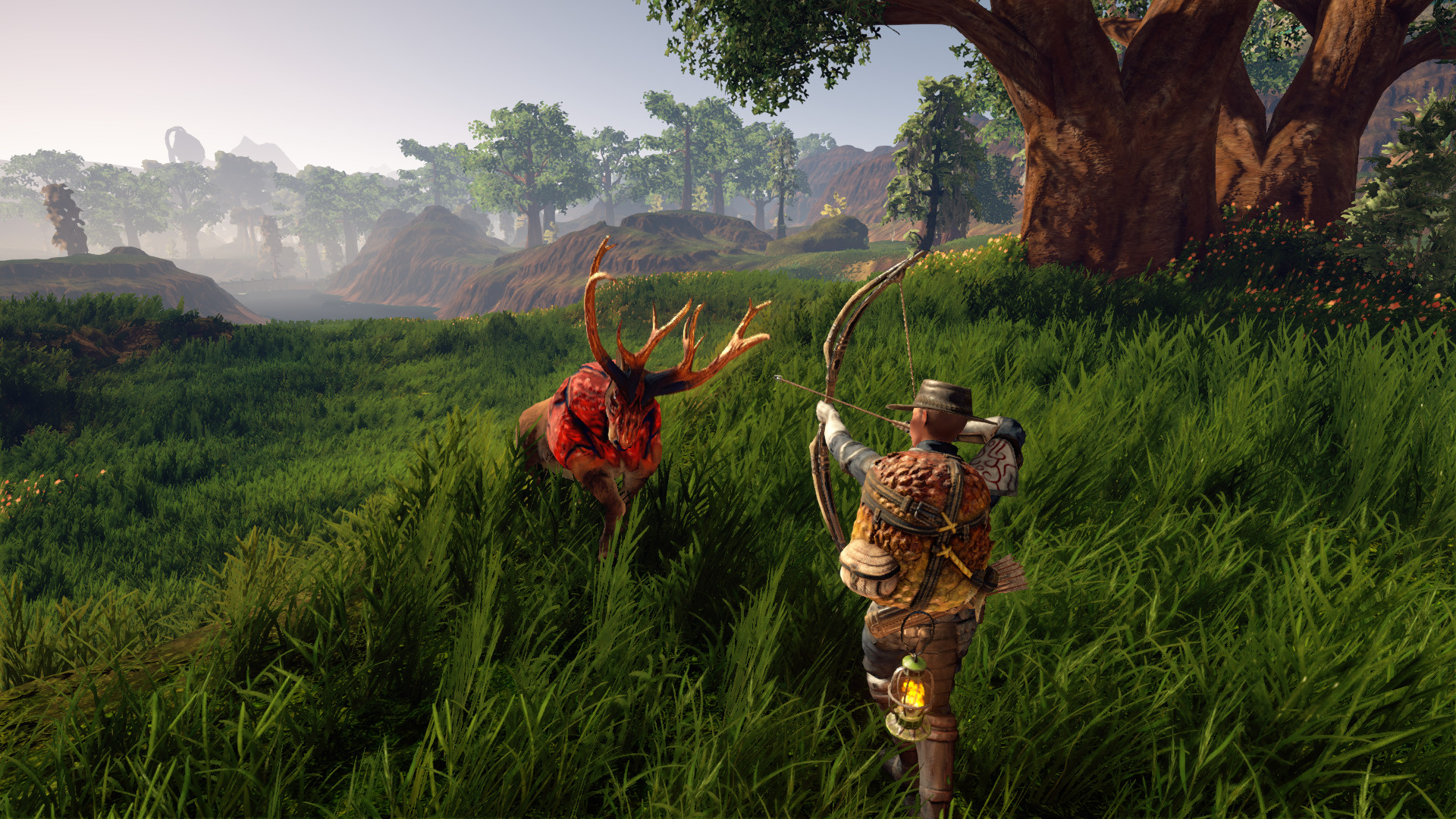 I can understand the fairly high pricing point. Clearly a lot of effort and content has been put into the game. Unfortunately the production quality (voice gaps, clunky mechanics, good-but-not-stellar graphics) don’t warrant the cost. I’d say it’s worth a look if you can get it for 50% discount or better.

Loads of achievements, in keeping with the amount of content. Trading cards available already, but there’s no cloud support which is a major omission in my opinion. You need to be able to save your progress on multiple machines with this type of game.

Outward has a large number of ingredients – crafting, bodily effects, combat, lore etc. It’s a content-rich game no doubt. However, any good chef will tell you that throwing tons of ingredients together doesn’t necessarily make a good dish. If you’re an RPG veteran you’ll probably thrive on all this complexity, but for me it was too overwhelming and I never really got over that ‘hump’.