Do you yearn for Adventure? From humble farmer origins to mighty warriors. Let your legend be written in the blood of your foes. Enter the tactical fray of the Yondering Lands

Tactical Combat for the Soul. Turn-based battles on a tile board put intuitive tactics and startling power in your hands.

Bring Your Adventuring Shoes. Meet new and thoughtful characters who don’t know they’re heroes, and grow them into your own legends.

Tell Your Own Memorable Stories. Fight and win, sacrifice and survive, charge and flee. Sometimes die. A good story needs everything.

Wildermyth is the creation of Worldwalker Games, an independent game studio based in Austin, Texas. The core team consists of Nate and Anne Austin. According to their press blurb, they have 20 years of experience in game development. The standard of the closed beta code I have playtested makes it abundantly clear that these people are seasoned professionals. As the project has ramped up additional writers, designers, and musicians have been drafted in to add extra polish and content to the title. The current beta is only available at present on itch.io. A full steam release is planned for early 2019. 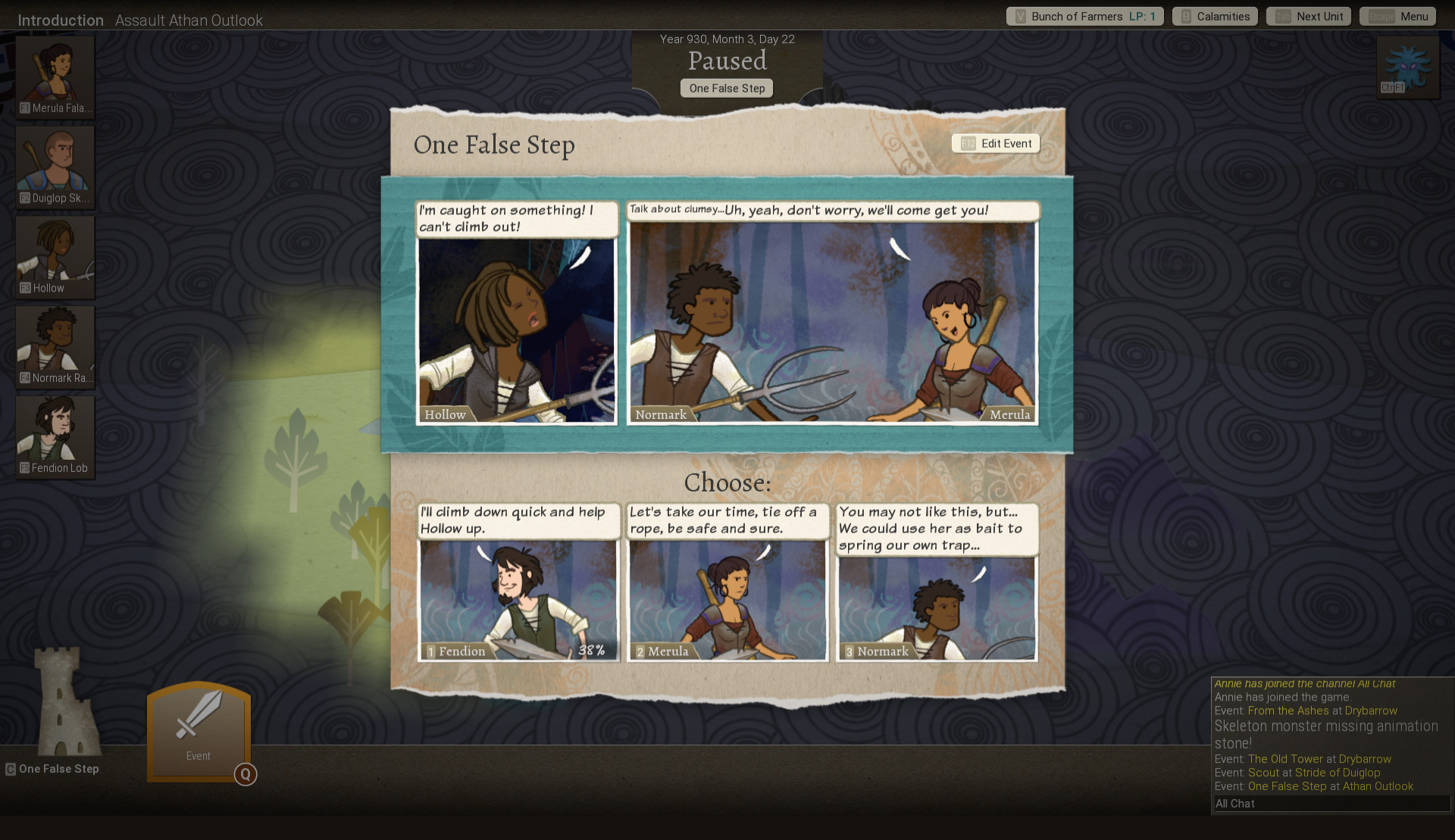 I’m not normally engrossed by storylines in TRPG’s. Even the legendary Nintendo series Fire Emblem leaves me cold. I know, I’m probably in the minority in this regard. Despite the excellent Treehouse & 8-4 limited translations, I have never found the lore or narrative that compelling. It’s workmanlike at best. Much like the previous Mutant Year Zero game, I find a reduced character roster far more engaging. Instead of a cavalcade of cookie cutter toons, a smaller troop gives the main players room to breathe. By clever use of random story elements and good writing, this adds a richness to their personas.

Wildermyth is based in the Yondering Lands. The devs have chosen to found the lore in a fictional pseudo-old-world America. No high fantasy lords and ladies. No Tolkien prose. Just common rural folk with a sense of adventure. I like this grounded style. It gives the world a level of believability. The language used isn’t peppered with lazy ye olde slang either. No Albert the strong or Kevin the flatulent. This immediately makes the cast more relatable. You can easily feel for the characters internal monologue and their place in the situations they find themselves wrapped up in. 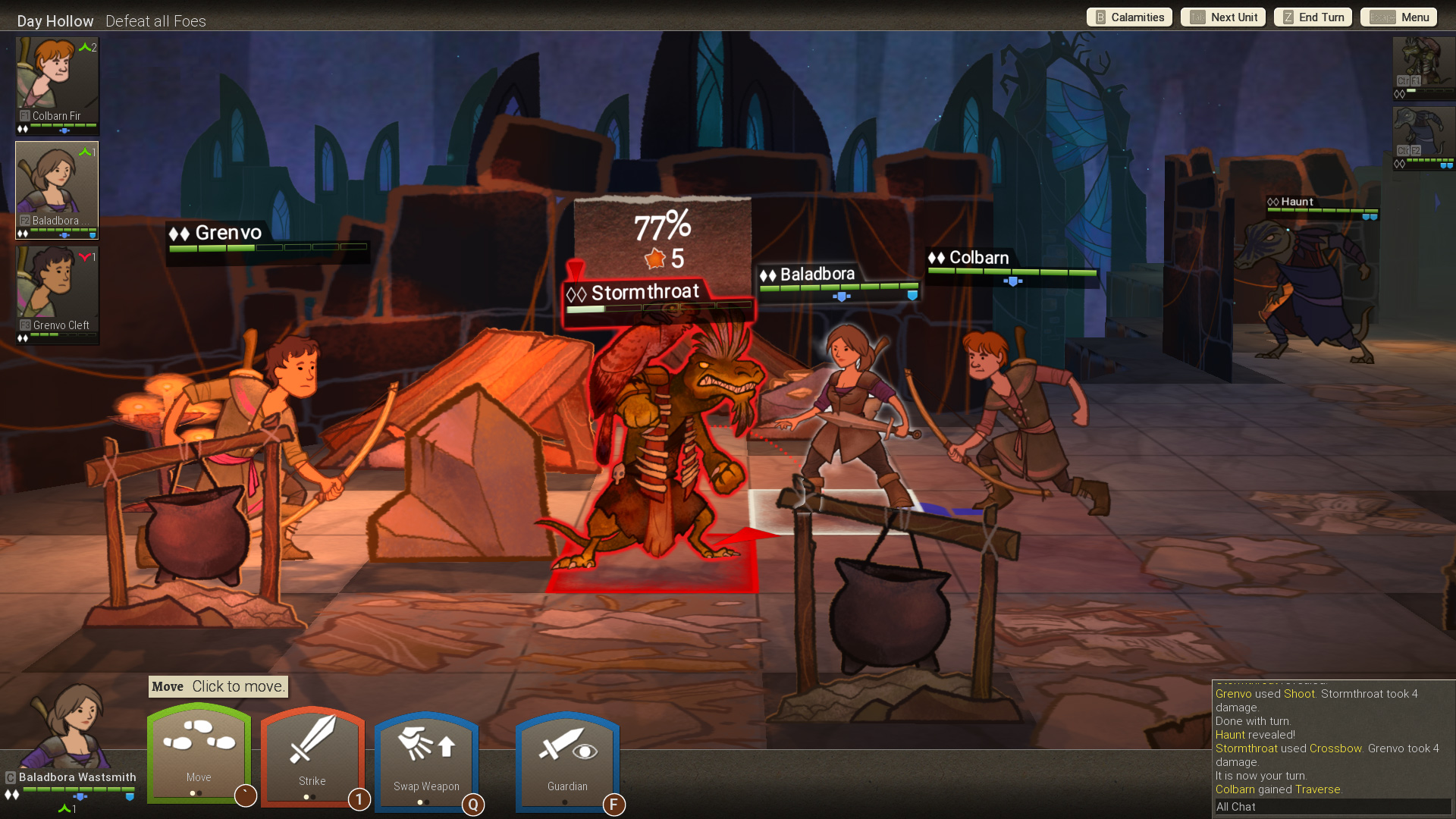 The campaign starts with just three main characters. These are auto-generated. You can customise their appearance but their stats are initially locked. If they don’t meet your expectations, you can reroll them until you find a toon more appealing. The fine tuning on the custom options is excellent. The paper doll system allows great flexibility in the overall look of your hero. Colouring of individual clothing items can be fine-tuned down to the industry standard web hex values.

Heroes are generated with a back story. This comprises of an origin, and anecdote, and a motivation. These affect prime stats and personality stats. and these, in turn, apply personality flaws or quirks to the character. For example, My current melee tank Roygaron is lucky, loyal and a bit of a flirt. These attributes can determine random story triggers and also how he interacts with his fellow compatriots, both on the battlefield and in between missions dialogue exchanges. All these scripting elements result in a truly dynamic narrative. I’ve started the game a half dozen times and in each session, the early chapters have all had completely unique plot twists and events.

The characters you create are accurately recreated in the comic book style cut screens which are used to present the narrative in an engaging manner. Every item of clothing and additional armour such as a shield are displayed. These are generated on the fly by the impressive procedural engine pumping within the heart of the game. I noticed this early on in one of my early sessions playing the old alpha build. One of my characters had a sudden compulsion to visit a mystical forest glade. Something magical happened which caused the fringe of his hair to turn green. From that point on, his portrait took on this new look and the subsequent comic cells also displayed this new appearance. The scripting system is not just for adding details and graphical fluff. It can be used to add numerous side events and missions beyond the main quest line. 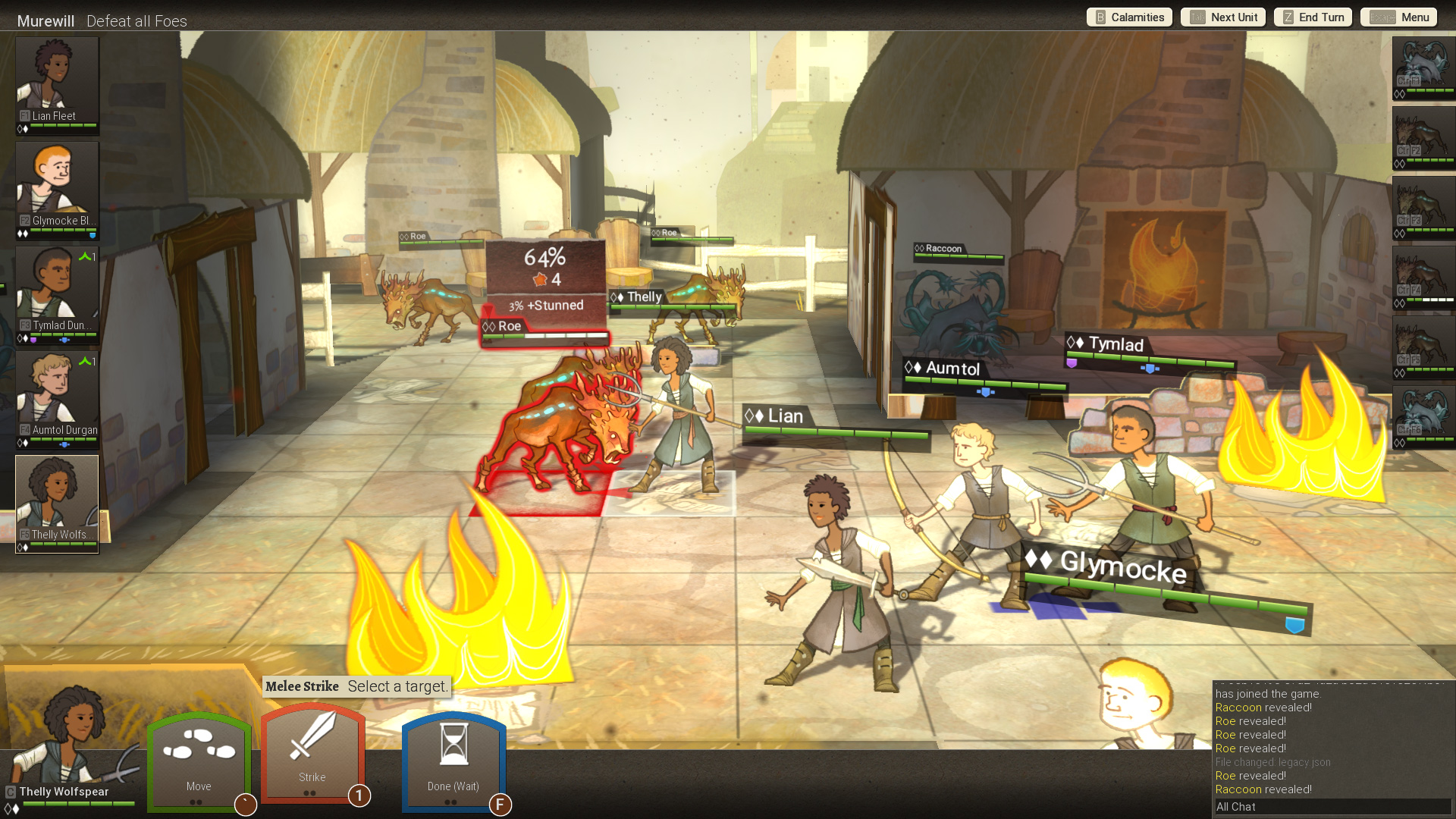 There are three main classes in the game at present. The party starts as a bunch of farmers and every hero develops over time. A farmer can become a warrior, a hunter, or a mystic. The first two archetypes play out as expected. Warriors can be used as front line troops and tanks. Hunters make excellent range fighters dealing damage from a distance. Mystics play with an interesting twist on the usual mage class. In the early part of the game, they have no direct spell against foes. Instead, they have the ability to infuse scenery objects such as furnaces, fires, lamps, trees and wooden barrels. Once infused, an object can then be used to invoke a magic conjuration. For example, a furnace can be made to flare up, dazzling nearby enemies. Wooden barrels can be splintered showering beasts with wooden shards. Defensive infusions can also be cast, stone wall cover adds a calcify armament buff.

Heroes can be maimed in battle. They can lose an arm or leg depending on the assailant. During one skirmish my rookie archer took a direct magic strike from a beast, severing his right forearm. I thought his battle career was over. He returned to his home village to recuperate. A few turns later he returned to the party, now sporting a pirate style hook appendage. He also gained an experience level which due to his natural high dexterity added a new ability called silkstep. This enables him to slip into the grayplane, a mystical zone which makes him invisible to enemy units. All these new talents make him an excellent stealth assassin. This shows the power of the procedural systems and how they can have a real tangible impact on not only the gameplay but the story as a whole. 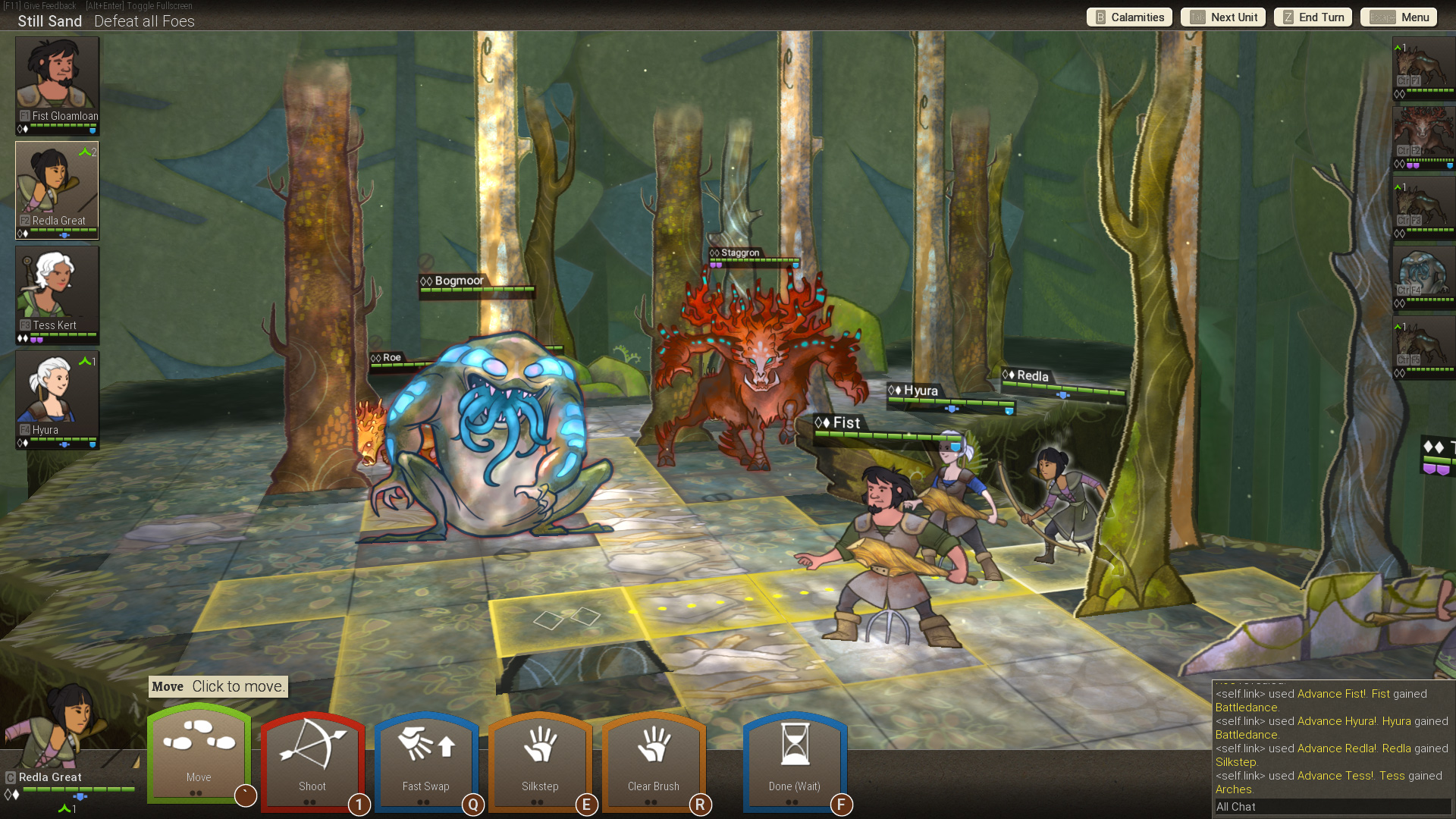 The passage of time has a profound effect on the game world. Heroes age, they acquire more skills through skirmish victories and encounters. Eventually, they have to retire. Traversing the campaign map in measured in travel days. Scouting new regions, rebuilding pillaged settlements and training up raw recruits all advance the chapter progress.

Once the Chapter goals have been achieved, a summary screen is presented. This displays all the resources and lore points that have been gained over the episode. Resources can be attained by clearing out areas and rebuilding structures such as refineries, outfitters and breweries. This intern can be used to craft upgraded armour, weapons and offhand items like poison potions.

The core components of the game work extremely well. The turn-based battles are challenging but fair. The enemy AI is good. Range attack beasts hold their distance and try to pick off unwary troops who wander too close. Keeping a tight formation is imperative with your front line troops. By clever use of stealth tactics, you can blindside foes and hit them with devastating dagger strikes. The entire feel of the combat is hugely satisfying and compelling. 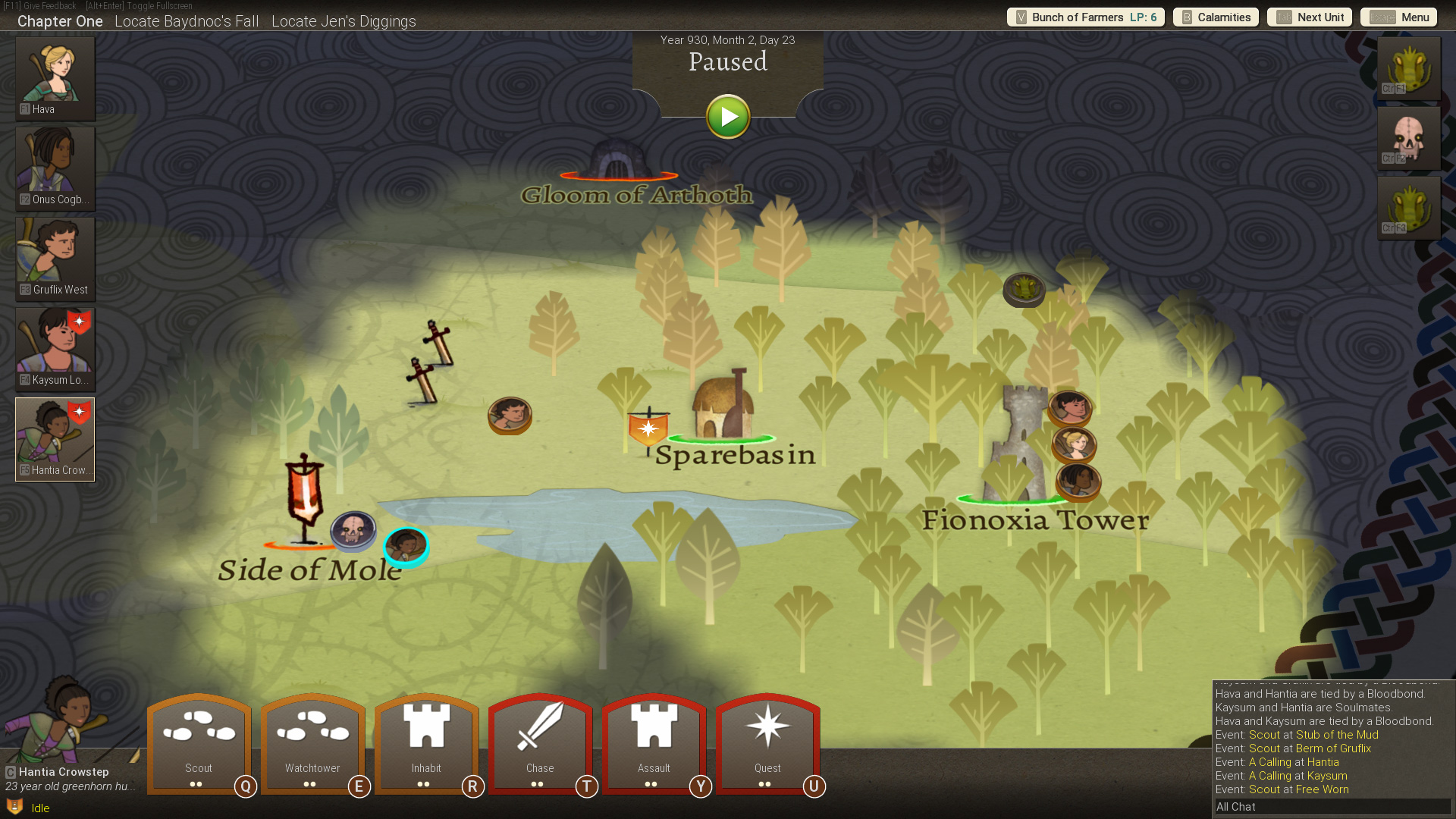 Wildermyth uses a Java-based game engine. This is a brave departure from the usual Unity and Unreal development tools. A lot of bespoke code has been implemented which gives the game a unique presentation, from the GUI design to the procedural nature of the art assets.

The papercraft art style is a joy to behold. The gameworld battles take place in a 3D diorama. This reminds me of Chinese puppet theatre and the paper doll houses my sister used to cut out of craft books. I’m surprised this iconic aesthetic hasn’t been used before. Heroes movement is portrayed as if advanced by a human hand around a board game. They jovially bounce from square to square. The sense of depth is great. With the robust camera tools, you can pane and rotate around the scenes. The overarching map is present as a tabletop game with counters as player pieces.

Underlying all these basic mechanics is a gorgeous watercolour and pen presentation. The subtle use of pastel tones. Muted greens and blues hues convey a mystery to the forests and glades where dangers lurk in the shadows. The “cardboard” assets are dappled with moving sunlight and shadows. A fantastic shader effect has been used to breathe life into the static scenes. Particle effects simulate dust motes and smouldering fire add a further layer of graphical vitality. 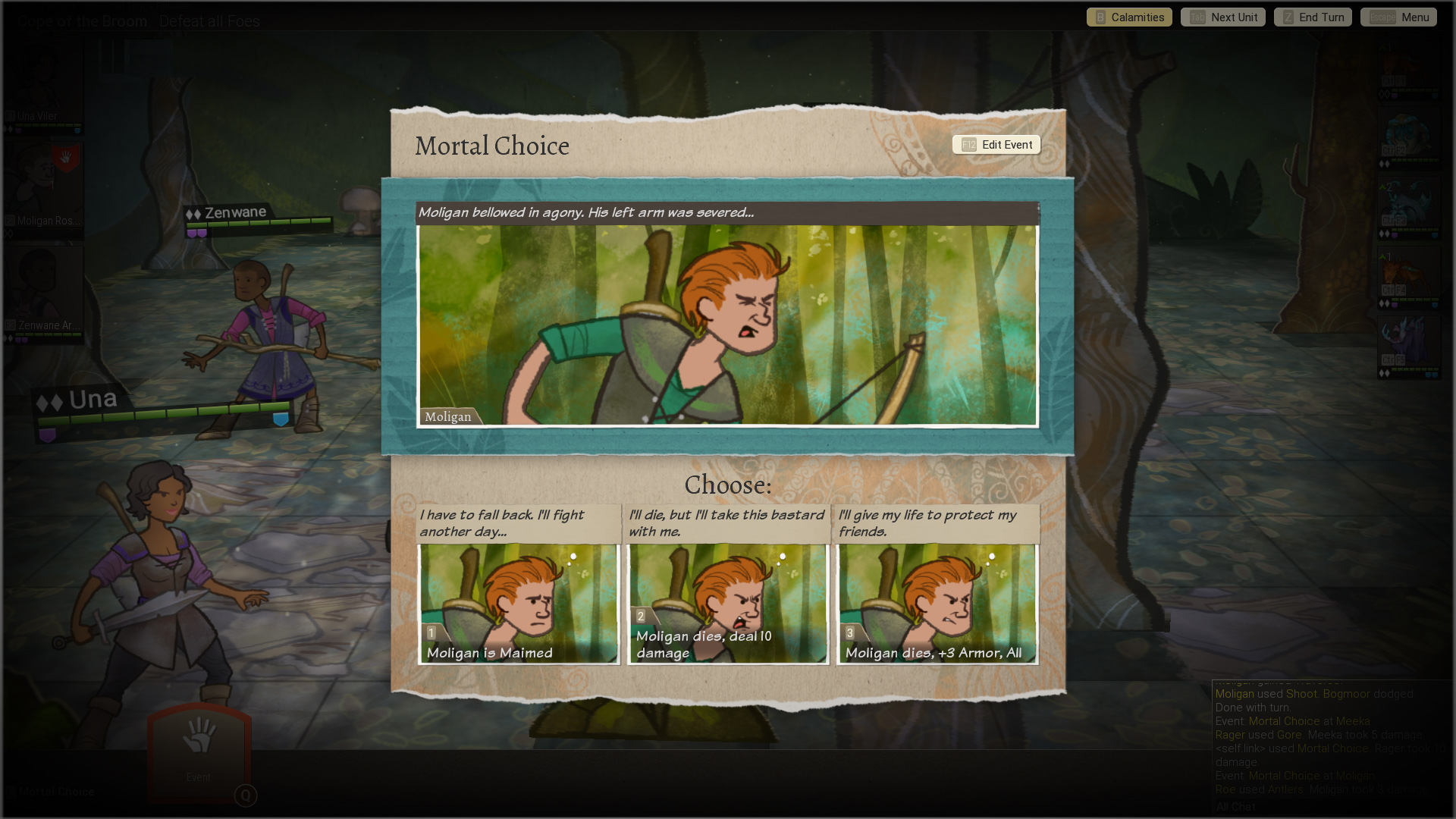 The quality of the last few indie games music scores I have reviewed has been outstanding. Wildermyth is no exception. The OST has been created by Candy Emberley, A classically trained viola player from Minnesota. Her solos and composition have a beautiful warmth and feel. I immediately knew this no was stock sample library sound source. The recordings have a wonderful depth of resonance only found in a profession musicians touch and precision. Clever use of pizzicato strings and oscillating scales underpin some sumptuous gliding, lyrical top lines. Candy’s background in producing film music is self-evident. The whole soundtrack would not be out of place in any Hollywood blockbuster movie. The sonic landscape fits the visuals perfectly. Overall its a great coup for the first project of any burgeoning development studio.

I’ve been hugely impressed with the content and structure so far achieved by Worldwalker Games. It’s yet another fine example of an indie developer’s passion project brought to life. Whilst the big publisher’s recent offerings stagnate with endless battle royale and “games as a service” titles, Indie devs are making fantastic strides in both quality and innovate work. Wildermyth seems almost feature complete. I’m sure the next couple of months spent refining and polishing will make the final Steam release a gem. I for one, can’t wait to spend more time making my own history and legends in the Yondering Lands.