Breaking NEWS… Five foot tall Rat rides a Ferocious Gator, “not ta-day” says this Florida man! Watch as he takes on a horde of toxic mutated monstrosities alone, more after the break

Virtual Reality Games are currently dominated by the Indie Developer, granted a few large studios are putting in the time and capital to add VR, but the majority of strictly VR focused titles are in the hands of smaller teams.

With the right amount of effort and love these games can shine, lets Hope Bolverk has polished a Gem for us because the future of VR is in the hands of the few.

To be blunt; Dick Wilde 2 is clearly a sequel, which in the video-game industry can be an opportunity for growth and reflection, for teams to put right the wrongs they left in the original and add ideas that didn’t make the previous games release window.

DW2 has added Co-op, Boss fights, and a new arsenal and a few other goodies. Lets find out what that means for you, the Player… 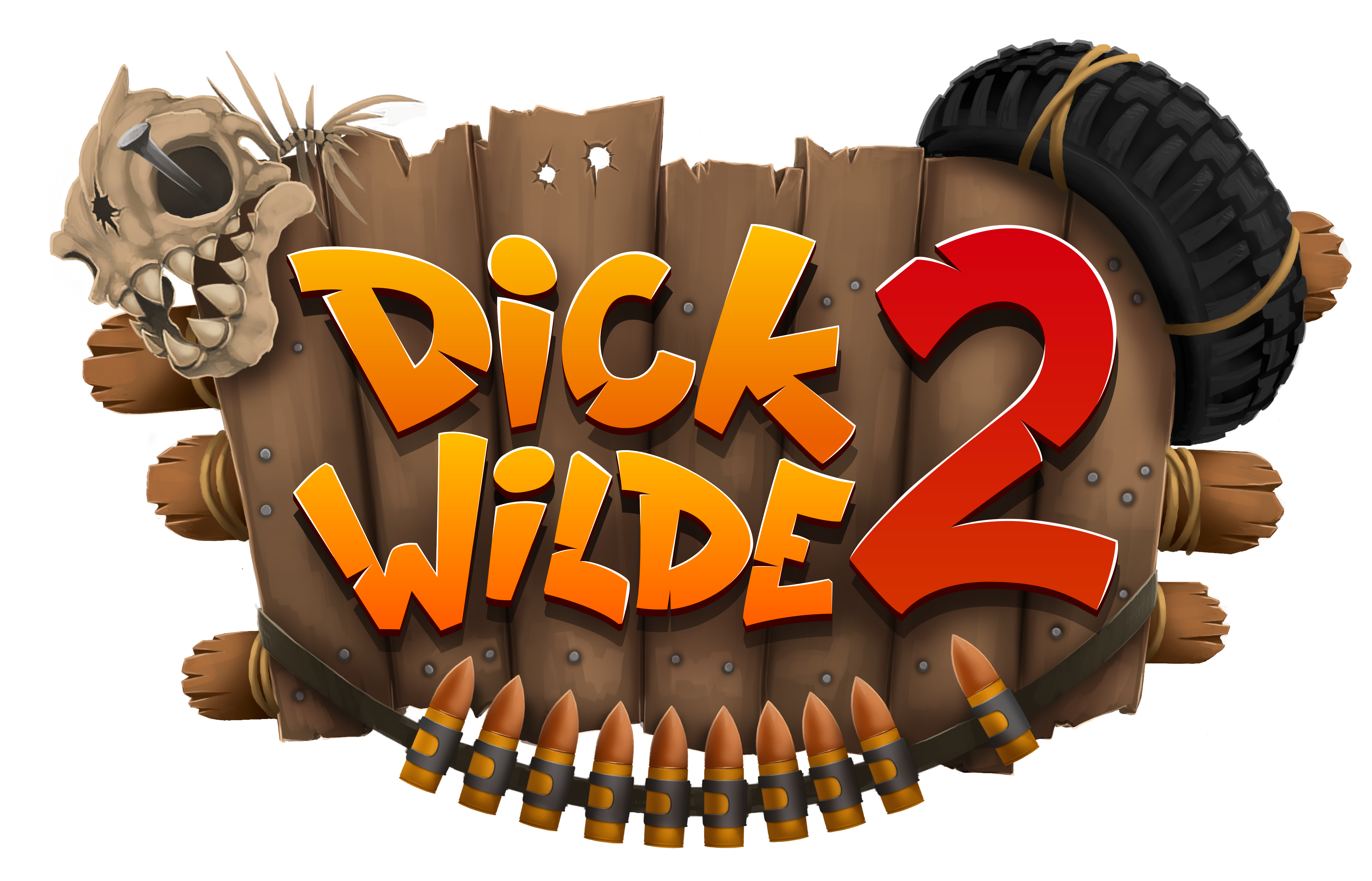 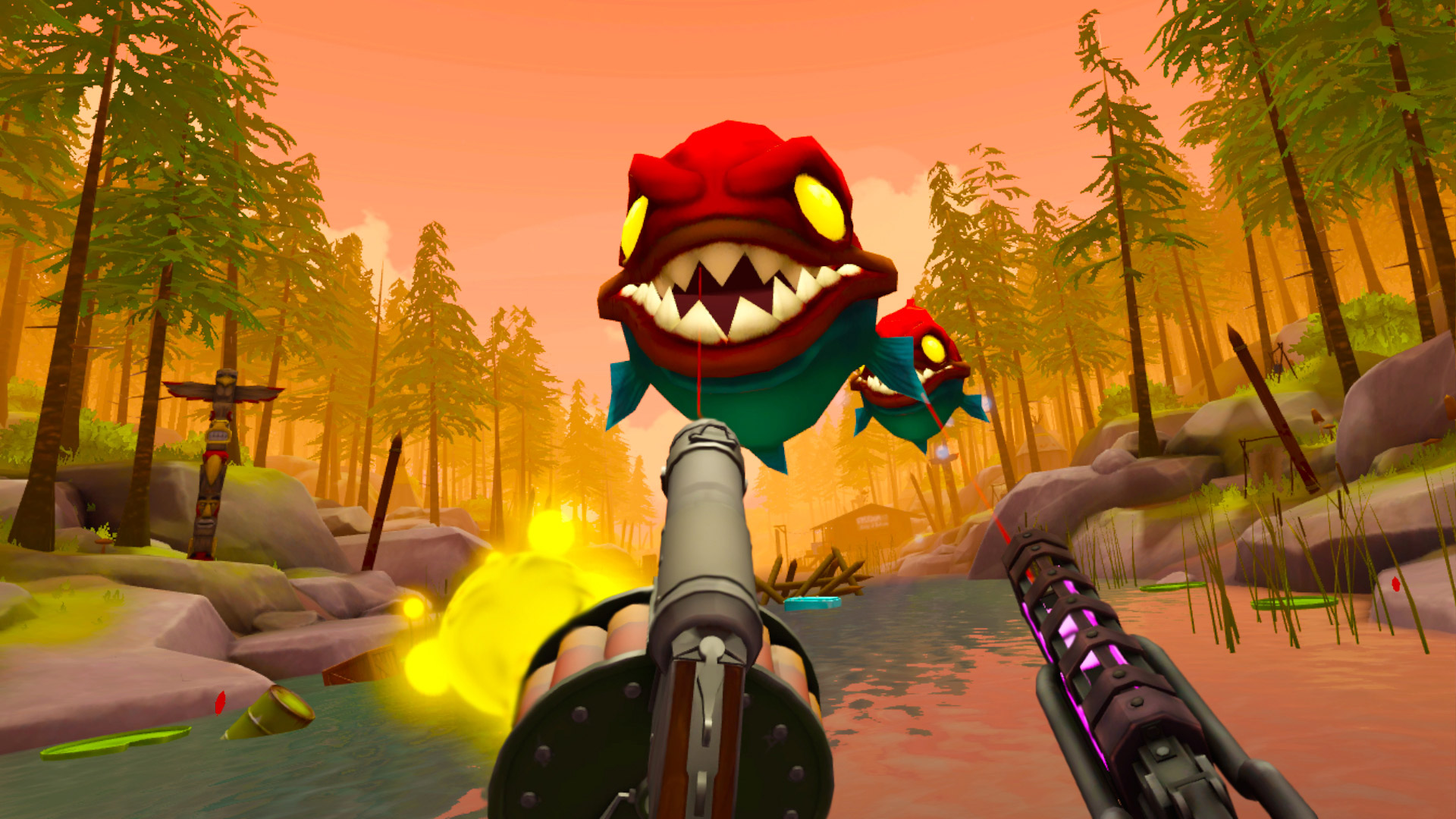 While there is a narrative, the game isn’t really played for its compelling story. You are a guy (or Gal) who volunteers to ride a raft and buy equipment from Dick to take out all the nasty critters infesting your fishin’ spot.

The Story is told through subtle clues and little Easter eggs you pick up as you progress, small details along the way. I actually appreciate the candid nature of Dick Wilde, it isn’t ashamed or afraid to be what it is; A shamelessly redneck silly FPS.

While some of the humor falls short of a chuckle, I did find a decent portion of it amusing, and managed to laugh out loud at least a few times. “It’s-a Me! Dick-a-Wilde…. Nope I can’t pull that off!” 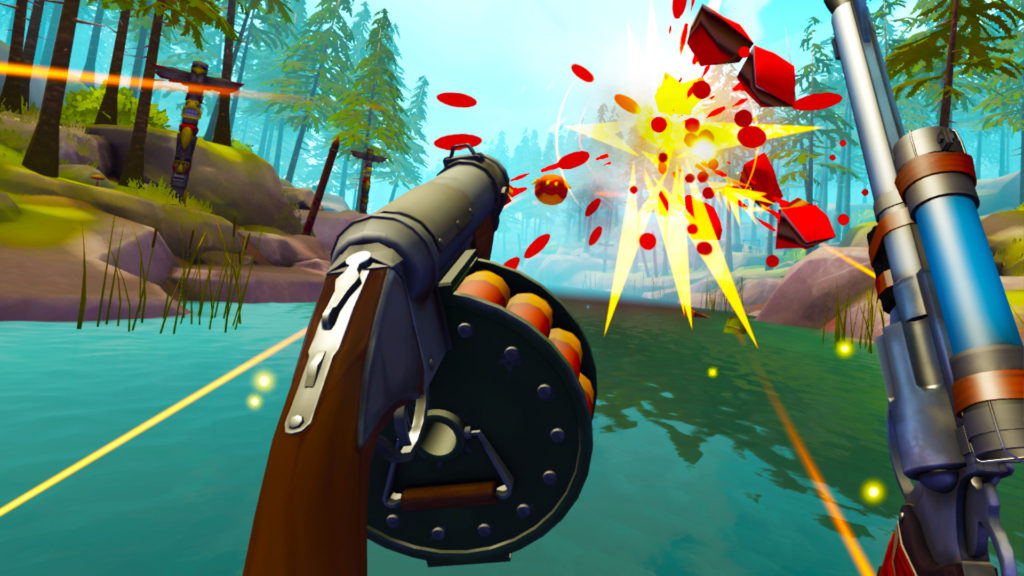 While the tongue in cheek deep south humorous tone of the game might not appeal to all, it will have its crowd. I found the style of the art and choice of gameplay elements to be a nice reprieve from the dark and serious shooters that have been releasing.

There are plenty of things to love and a few to hate. I think most will agree. 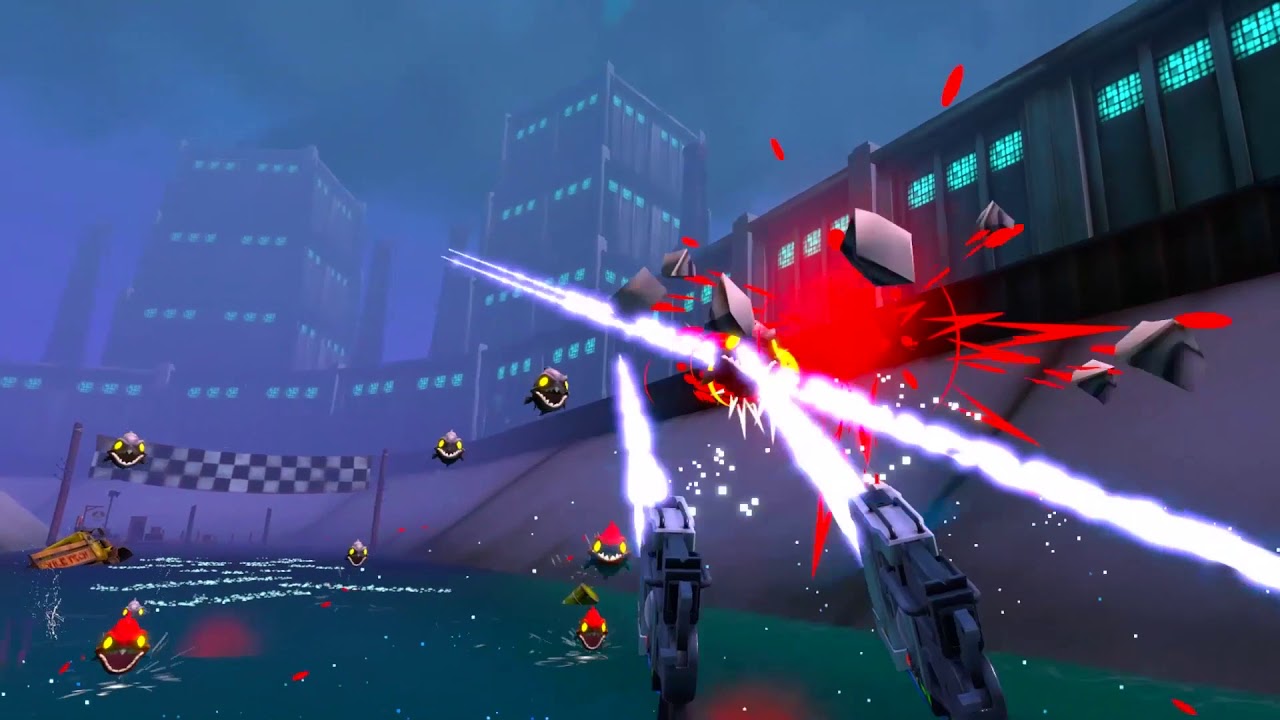 Bolverk Games has an opportunity to be intensely proud. This is one of the few games released of late with zero glitches or crashes to interrupt the enjoyment of the title, for my current configuration (which, granted is not a sizeable data set).

With huge games like Apex Legends, and Far Cry New Dawn both plagued with thousands of reports of crashing to desktop, it is more apparent than ever that the love of your craft and pride for your work that makes or breaks a studio. EA and its offshoots like respawn, and Ubisoft both have huge revenue streams to keep them afloat when IPs bomb, others do not, and its this level of quality that all game devs should aspire to.

The music in DW2 is not an original sound track I would blast from my car or even my living room, but it fits the feel of the game and despite my loathsome attitude towards “Twangy southern style” music, I actually found myself enjoying it.

An odd choice was made to make the Games soundtrack shift from the audio perspective of Background music to the perspective of a small portable radio next to Dick Wilde. It was slightly jarring and unpleasant, but it did give me pause and realize the game uses positional audio.

The is little to no variety and the repeated music does make for a slightly irritant after extended gameplay sessions, but as stated before, enjoyable for a short duration.

Weapon sounds are by far the best feature in the games audio, the variety is great and the arsenal has a meaty and satisfying feel. 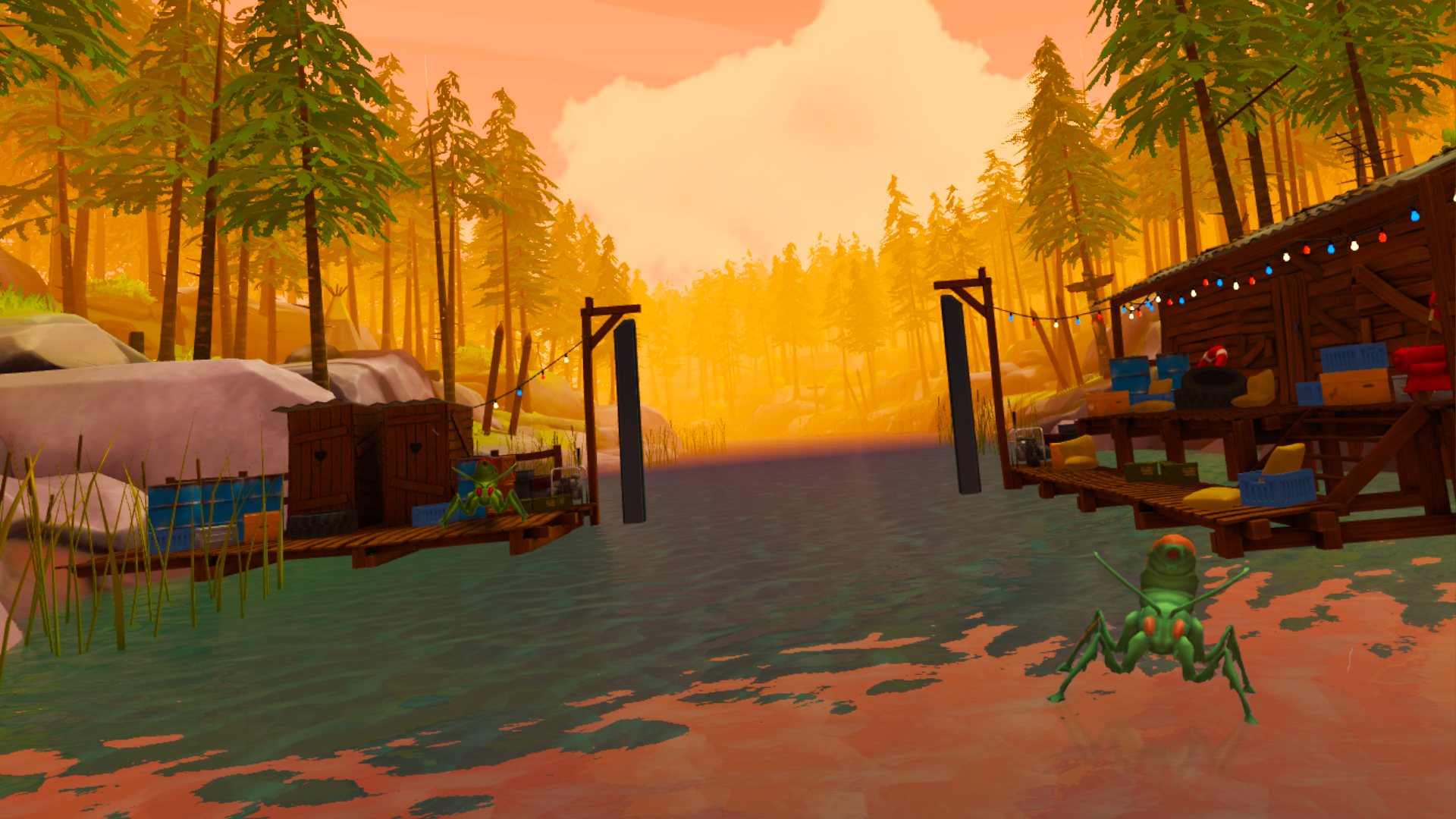 The backgrounds and art style should feel familiar, it is the lower than usual poly-count and smooth almost cartoon like look many Indie Dev’s are using to minimize time invested in the textures and models.

That’s not to say it looks bad, on the contrary I like it and it also tends to perform well on lower tier hardware, it just feels like its become to commonplace and is stunting the growth of the medium slightly.

The models look fairly decent and all work well together to present a good looking game, just not a stellar one. Walking and idle animations are a bit rigid and the choice to make Dick speak without any movement of his face and mouth was lazy and impacted the likability of the character.

The Purdies:
• Bright and Vivid Colors
• Lighting and scenery
• Most of the weapon and enemy models

The Dirtiez:
• Some animations are rigid and out of place
• Dick talks like a ventriloquist
• Static model for the main character (even just having his head follow you and mouth move would have been 100x better) 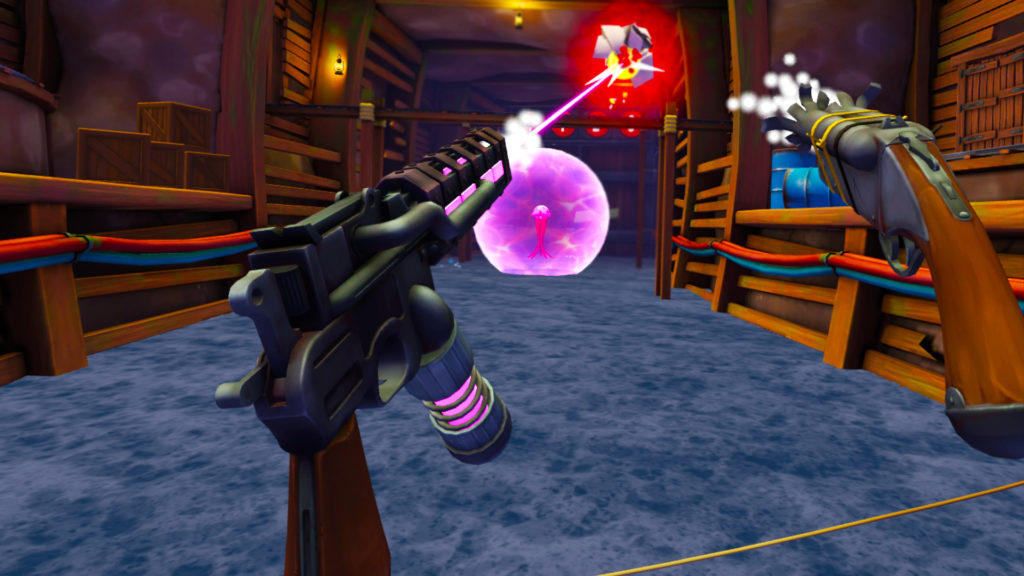 One look at the main menu structure and in-game map in the levels and you can tell Bolverk wanted to outshine Dick Wilde.

There are three locations that make up a total of eleven levels in total. Six are for the single-player/co-op missions and four are used to unlock Dick’s weapon selections. There’s is also a boss level, to round things out.

Unlike the first game in the series, Dick Wilde 2 puts you on a raft that moves down a series of paths. If you have played other on-rails shooters, you will be familiar with the progression.

The Gun selection is great, and while I do think the more unusual guns from the first game were a bit more creative, the selection of weapons in the sequel are more fleshed out and generally more fun to use.

There is a decent amount of gameplay here and if you find yourself a scoreboard chaser, then topping the last run is always a motivator for some.

I felt like there were times were the game threw a ton more enemies at you then you could possibly handle to slow progression or force replay. the spike in difficulty would often go from say a 4 to an 11 in a few seconds. This was frustrating but challenging. 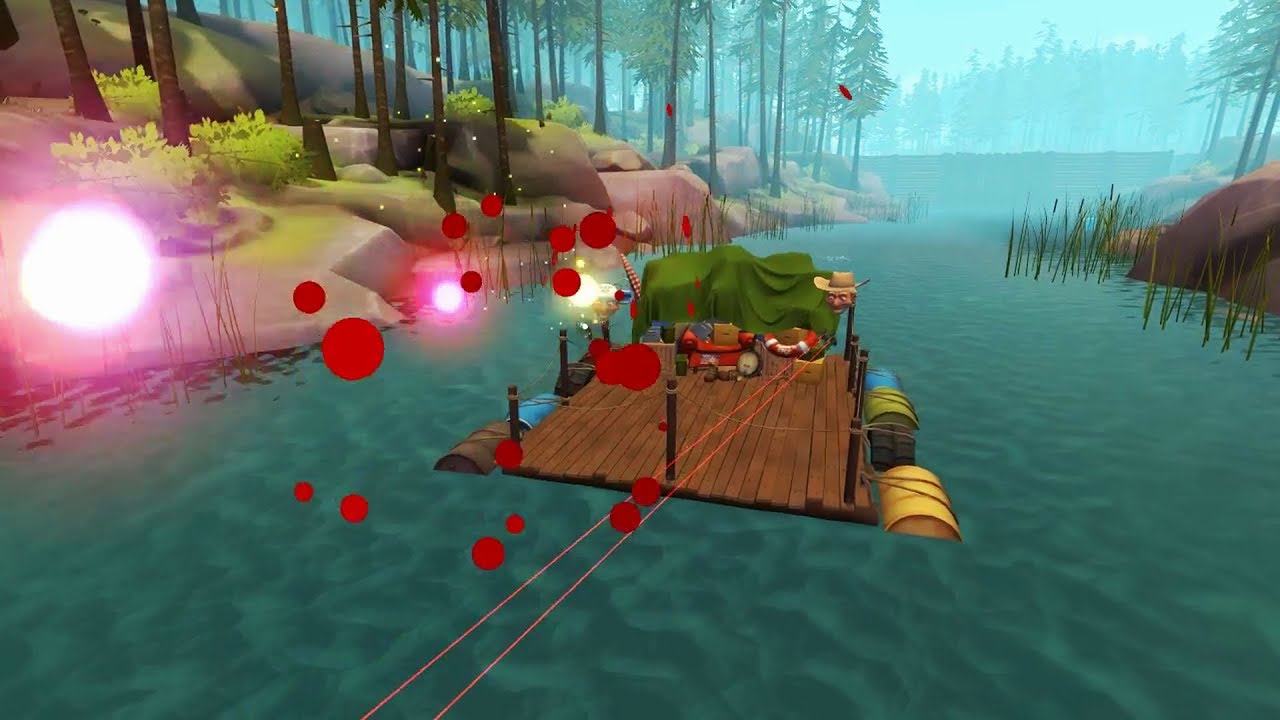 Vive wands. only the triggers are used for the most part.

The Good:
• Fun gameplay that is Repeatable
• No glitches or crashes
• Weapon selection and gun-play
• The humor and tone
• level layout and path selection

The Bad:
• Music was limited and only enjoyable in short bursts
• Animations of some enemies
• Missing some of the weapon selection creativity from the original

The Ugly:
• The main character has a ton of personality, which is wasted on a static rigid model
• Manufactured replay through intense difficulty spikes

Verdict
Dick Wilde 2 is a fun game with plenty to offer, it runs well and has no technical hurdles. The Co-Op is really fun, as is the new boss levels and select-able paths and unlock progression system. That does not mean the game is without flaws, as the main character is rather lovable and charismatic, only to be cut off at the knees by a terrible choice to omit animations for him. This is a simple pick up and play game with no learning curve and a fair amount of content to play through. It is not game of the year, but it is a game I will revisit, which is more than most can say.