Lasers and cubes are once again the greatest enemy, but this time the goals are hiding behind turning walls and multiple laser directing mirrors.

Back in the saddle, again!

I remember testing out the first Rethink not too long ago (it’s not even two years old) and this is now the 4th game in the series! I am a bit worried about if I even have time to look into this properly before the developer finishes the fifth part. Even with the tight schedule, the games have been different from each other and none of them felt like it was recycled from the previous parts. It was hard to make a video without spoiling any solutions to the puzzles, so take notice, the video contains spoilers!

Does this part again offer something new in terms of puzzles or perhaps in it’s setting?

I would had guessed the fourth time around in the same environment the game would feel old but I didn’t really mind, it still looks great with all the outdoor areas outside the glass fence, teasing me about the world outside the facility. It looks so calm and utopian. I’m a bit of mixed about if I ever want to see the world or should it be left to my imagination about what it’s like.

The facility the game is set in once again serves a different purpose, this time we’re testing concepts for escape games, but frankly I didn’t give much thought to it. The “plot” is offered in small tidbits here and there on info panels around the facility, so it’s quickly forgotten. Aesthetically, the game looks and feels the same as the previous games. Controls are intuitive and there aren’t many different actions to take. It’s easy to get right into the game even if this is your first Rethink-experience. 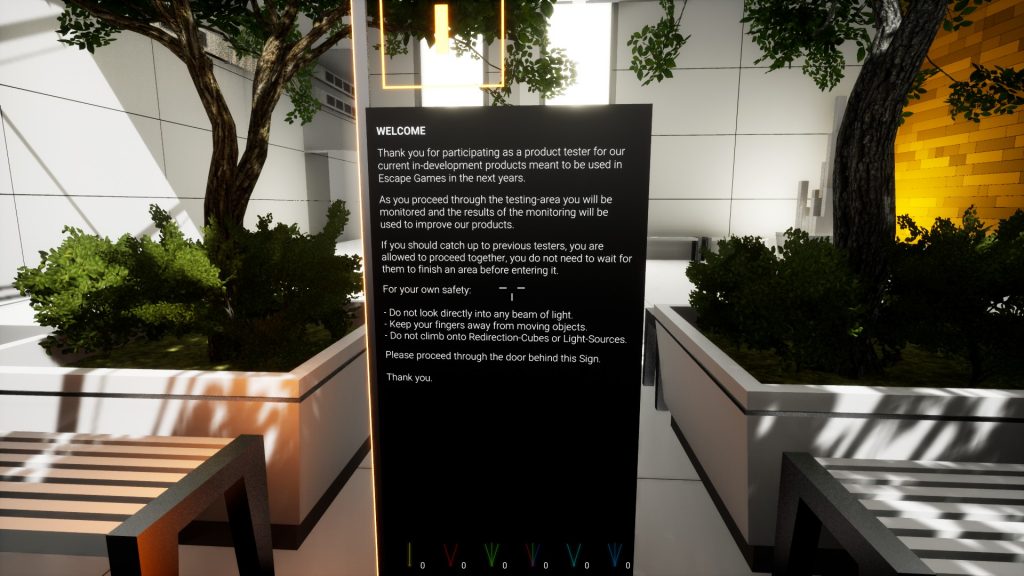 I didn’t personally mind the fact that there isn’t much plot available, the puzzles kept me occupied and, like with the other Rethink games, I didn’t feel like I missed the plot at all, I got all I needed. I’m given a few sentences that make sense and give an understandable reason as to why I’m stuck in a futuristic building full of cubes and lasers. Ten seconds of reading and I had a perfectly logical explanation to everything that has happened. I like this fact better than if they had built a “proper” story into the game. There are no cutscenes, no cliched plot twists or even an evil mastermind trying to take over the world. I was just a casual and carefree guy, testing out some puzzles for an escape game with a soothing soundtrack playing in the background.

When I first started pondering about the puzzles, I noticed that I’m given all the boxes right at the start. It felt a bit odd, since acquiring the boxes was a big part of the puzzle in the earlier games. They might had been behind a locked door that required activating certain goals, or activating bridges. I agree it was convenient now since I had them all with me instead of throwing/carrying them around one by one, but I wondered how much it would take away.

Another mechanic that worried me a bit was that the position where to place the cubes was again fixed. Last time I had a chance to place them wherever I wanted and it gave the impression of more freedom in the levels, trying out some wild ideas and possibilities. 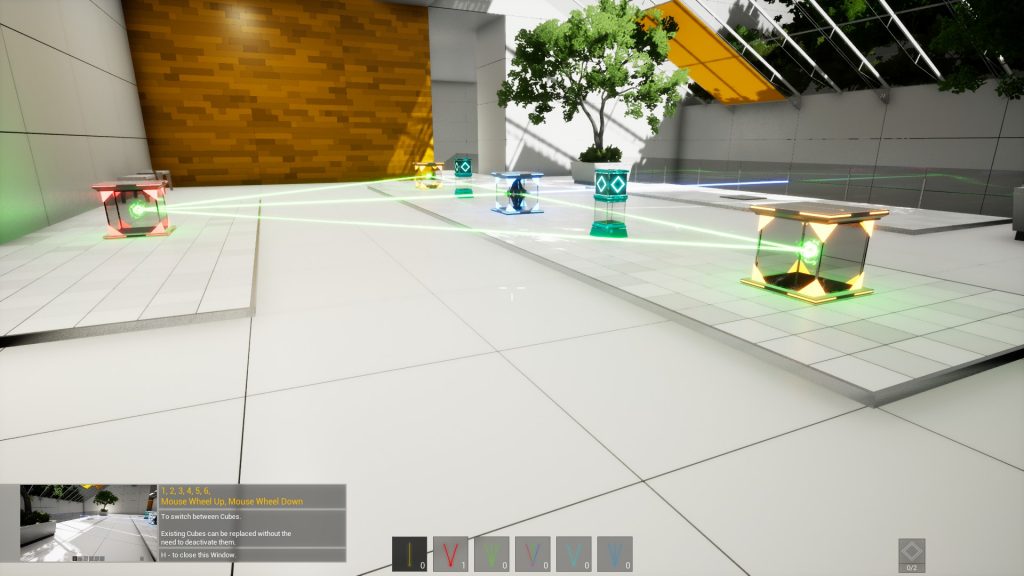 Thankfully, I had only jumped to conclusions and was proven wrong, the puzzles were challenging even though those two features weren’t part of the game anymore. I started liking how convenient it really was to hold all the cubes in my inventory and place them at will.

I would have still liked to place them freely wherever, and I feel that fixed places give away too much of the solution. On some puzzle games it’s easy to guess what goes where, on here, that problem is avoided by placing several spots on levels for the cubes to confuse the player at first (and again to try some wild ideas). On later levels I wasn’t able to correctly guess that much anymore. 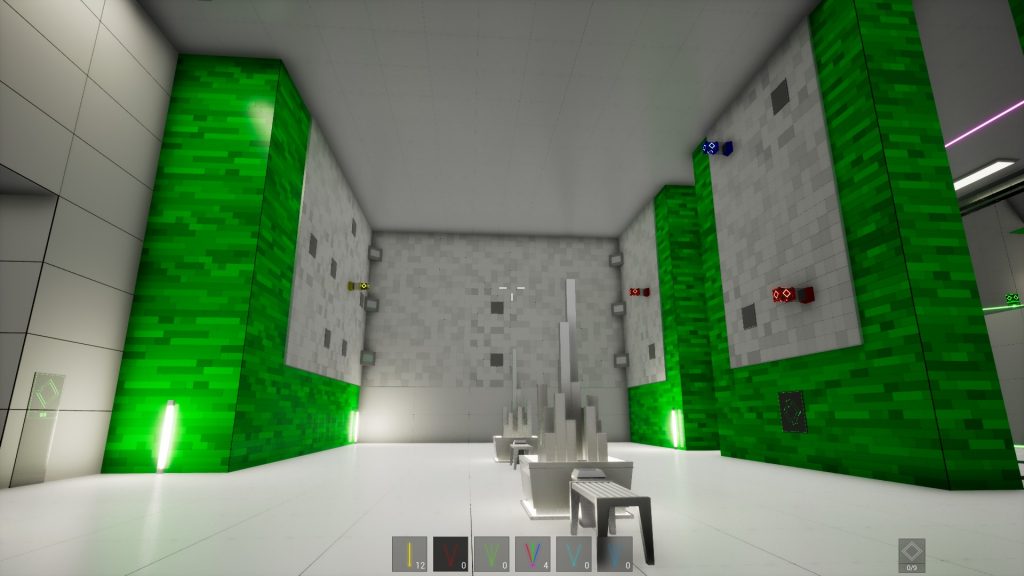 The biggest change in puzzles are the turning walls and vertical surfaces, they caught me by surprise the first time I encountered them. There were no-gravity zones in the levels in earlier parts but they weren’t utilized on this scale. Vertical areas now form a big part of the puzzles, sometimes even circling the whole room with the help of mirrors that direct the beam, creating much longer and complex puzzles.

I haven’t yet encountered a multi-room puzzle that was in the previous part. There was, for an example, a beam that had to be correctly routed through three different rooms. All those rooms had their own puzzles but one beam just continued and was also used in solving the puzzles inside the rooms. I have a few levels left at the time of writing and I’m hoping to see one of these kind of puzzles still, it feels unlikely, but it wouldn’t be the first time the game managed to surprise me.

Once again, it’s certified Rethink-quality. If you liked the previous installments like I did, this is more of the same with a little twist in a familiar environment. The puzzles themselves haven’t evolved too much in complexity, nor has the setting changed, so this might be more suited as an add-on in the vein of the Rethink | Evolved-parts that preceded this more than a proper sequel. I feel that a sequel should introduce more new things and feel clearly different than the first part(s).

Some changes in the mechanics compared to the previous parts, like having all the cubes with you right from the start of the puzzle room, fixed spots on cubes again. The biggest changes included turning walls and mirrors that redirect the lasers, expanding the puzzle area greatly when compared to the earlier games. But otherwise it looks and plays just the same as before, and that’s a good thing since it has always worked. No need to change anything in that area.

Four parts and all of them have been interesting and and even relaxing to play. There’s no feeling of time running out or someone breathing on your back. I have strolled around the facility multiple times, taking my time to think as long is I’ve wanted. In the sometimes hectic life in the real world, these series have offered me a nice place to jump into every once a while and relax.