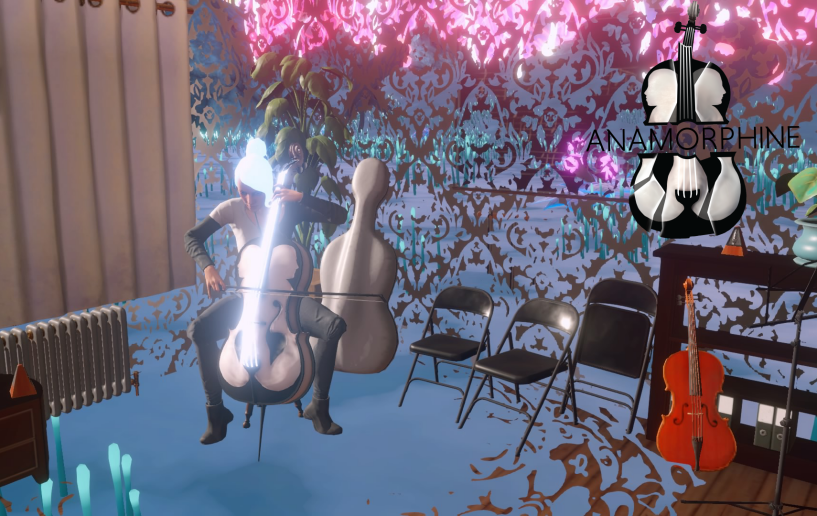 What could I have done differently?

Anamorphine centers around a single character named Tyler, the protagonist you play as, while he is remembering some key milestones he went through with his wife Elena. We see first hand how talented Elena is with her cello and how much she must have loved it as she managed to make it into a career. We can assume how Tyler encourages her, especially since she does lessons at their house, and how much they care for each other. However, this all changes when Elena gets into an accident that takes away her ability to play her cello and starts the downward spiral into depression. It doesn’t take long until Tyler notices and tries to help Elena, but she shuts him off. Tyler lives with a strong guilt that he didn’t manage to help her enough and perhaps looking back will help him come to terms with it.

The gameplay is very simple, only giving you the ability to walk and look around. The most you interact with is when you have to stare at glowing objects, if there are any in the scene, to trigger the next scene. This can go from the same area that changed a bit or going through a doorway of sorts (which can be crazy sometimes) to transition into another area. Other triggers are, unsurprisingly, walking around and looking at the right place. When you’re done with a particular set of memories, it’ll be captured by a picture and suddenly be in a hub-like world where you can go to the next set.

However, not all the scenes work out. There are various points where it’s unclear what you have to do (with some of these scenes going on for too long) and some triggers don’t happen. In one scene in particular, I was walking around to find a glowing item I must have missed, but when I looked it up it was just the game not triggering correctly. Or one area where you have to walk in circles until a change happens, it wasn’t exactly clear considering that the one possible area that could have changed didn’t. Some areas are repeated as well and that doesn’t say much other than showing the state of Tyler’s mind. This isn’t necessarily bad, but it could have been better and with more information or explanation in this short experience.

The worst scenes by far, though, are the later bike areas where you ride in the desert. It wasn’t as bad at the beginning since it was mostly on roads, but the way it plays on the desert just gave me motion sickness. It could be the combination of how the textures were done, how fast the bike moved, and how the bike was able to stick (and still ride on) surfaces you shouldn’t be able to like walls. It gets even worse when these desert bike scenes become warped. You can also get stuck in the rocks that can be hard to get out of unless you cave in and restart. I’m not sure how this is on VR, but I can see it being much worse.

I can see what it’s meant to say; that Tyler feels alone and the road to helping Elena is long and hard. Despite him trying help, he can’t seem to reach her as she falls deeper into depression. It’s just that these desert scenes aren’t necessary as it’s an overarching theme that didn’t need more symbolism to reinforcement it. 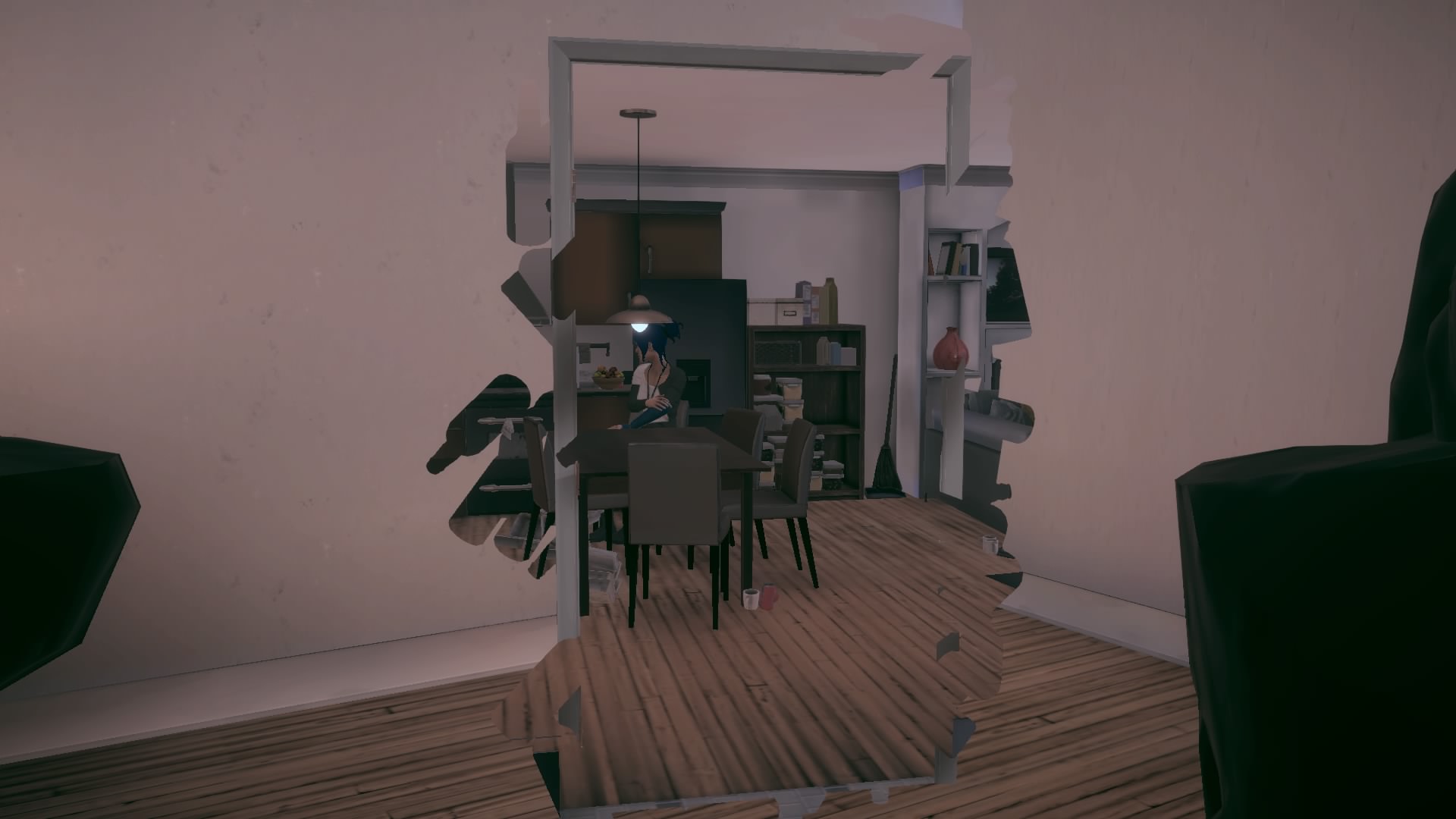 I’m also really iffy on Anamorphine having two endings, especially with how different both of them are (easily categorized as a good and bad ending) and how a very small action can change which one you get. There is a sound queue alerting you, but it only shows up at that time and you could easily dismiss it as a background sound like I did. It would have been better if the ending was a combination of the two or if it was more of a gradual thing that Tyler had to work towards to stay within the theme of Tyler either moving on or not. Of course, that would have also altered how the game would have played out (or even framed to some extent).

One of the worse things Anamorphine suffers from are technical issues. The loading screens, which mostly happen in the hub-like area, are long. Not only that, but it happens in places that suggest there wouldn’t be a loading screen. This can easily cause the player to be taken out of the moment, especially with how short this game ends up being. I’m surprised there is no door, or curtain in Anamorphine’s case, that the player looks at so these loading screens aren’t sudden. Perhaps not bringing in the hub-like area, which has the biggest problem with long loading screens, until it comes more into play at the end. Though this would have caused the framing to be handled differently. The game also stutters when walking through doorways. 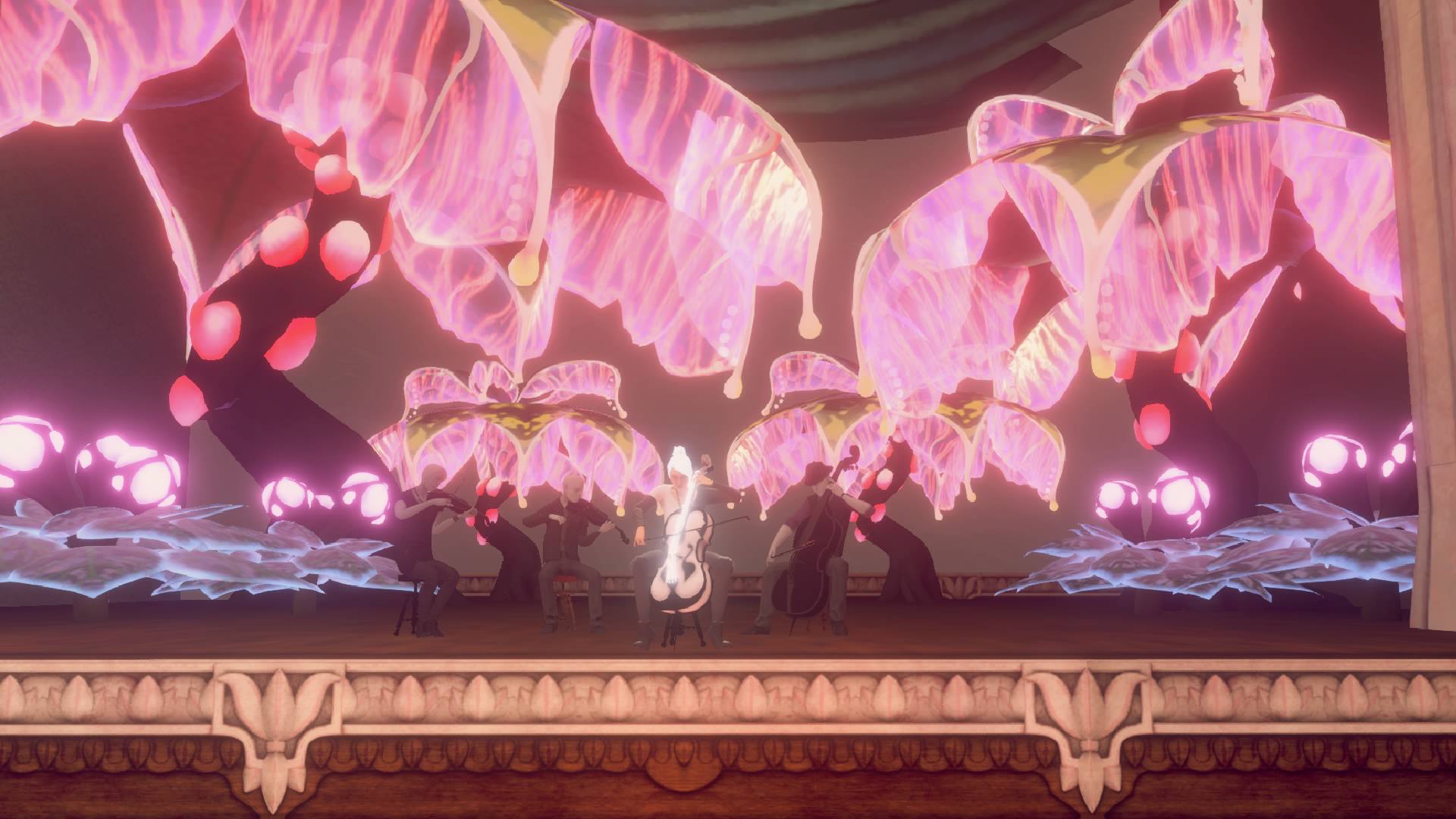 The soundtrack has to be the best aspect of Anamorphine, especially since it certainly wouldn’t have been the same without it (not to mention it would have been an oversight). Most tracks feature a cello that sounds just beautiful as it perfectly captures the moment. Plus, I’m always up for some nice songs featuring the string family. Everything else sound effect wise is also well done so nothing in this aspect will disappoint. The graphics are pretty good overall and it was pretty smart of them to base everything on Tyler’s memory of everyone (with the occasional person with clothes) to show that Tyler doesn’t remember how everyone looks except for outfits. What stands out the most are the transitions that were used between scenes and some areas were downright beautiful.

It’s interesting how Anamorphine doesn’t just show how mental illness affects those who suffer from it with Elena, but also those around them with Tyler. Somehow, it manages to put equal importance on both and it was a good choice to put the player in Tyler’s shoes so you can properly get that outside perspective and identify with him easily (even if you weren’t someone that had a depressed friend, you probably had a similar issue where someone shuts you out). Sadly, Anamorphine’s promising story is marred by some moments that should have been thought through more, such as the dreaded desert bike scenes, and technical issues. With how short Anamorphine is, coupled with the technical issues, I only suggest picking it up when discounted.

However, I do not recommend Anamorphine for those who aren’t ready for a game that features depictions of depression, substance, loss, and suicide. If you really want to still play this game though, it does offer a skip scene option.