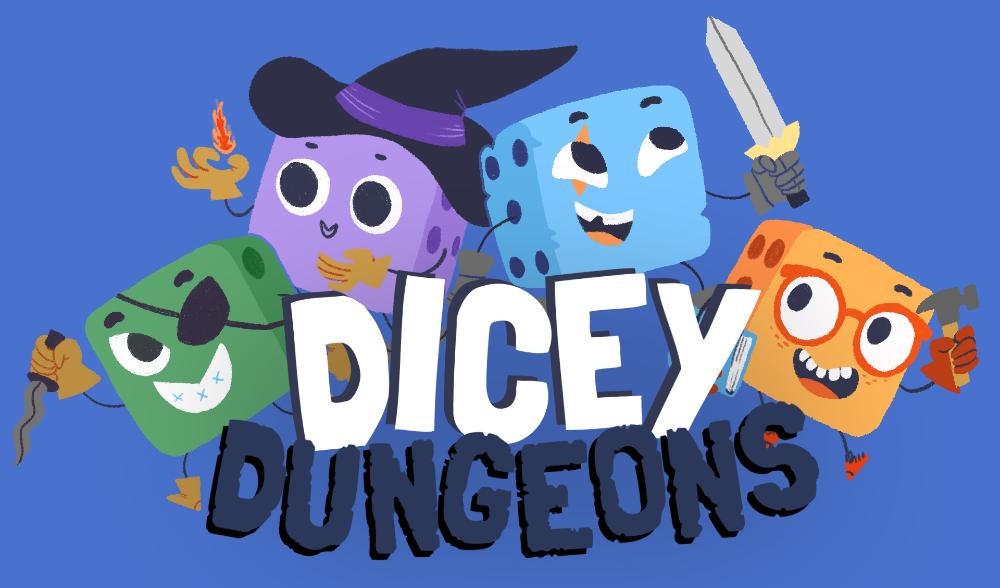 Dicey Dungeons is the new game from the mind of Terry Cavanagh. Its a brave departure from his previous arcade style projects. Roll the dice and read on…

Escape the cruel whims of Lady Luck in Dicey Dungeons! A new roguelike by Terry Cavanagh, Marlowe Dobbe, and Chipzel, coming out early 2019!

Learn to master six different characters, each with their own unique playstyles – ranging from the push your luck and risk it all Robot, to the swaggering, just smash stuff Warrior, to the carefully laid plans of the Witch.

Can your adventurers make it out? Maybe – but luck is definitely not on their side.

For me, Terry Cavanagh is a legend in the indie gaming scene. A true auteur, with a singular minded vision for game design. His previous works speak volumes about his dedication to gameplay over fluffy aesthetics. I’d regard his signature look as timeless. Games like VVVVVV and Super Hexagon have come from the classic 8-bit era that I lived through as a kid. This was a time when bedroom coders could become overnight stars. Terry’s titles wouldn’t look out of place alongside the likes of Mike Singleton, Mathew Smith and Jeff Minter.

The previous mentioned VVVVVV and Super Hexagon are way out of my comfort zone. They require some serious gaming skills in order to be successful. My old man reactions are weaksauce and hamper me from progressing in both titles. Dicey Dungeons, on the other hand, is just my cup of tea. Dungeon crawlers are one of my favourite genres. I’d shudder to think how many hours I have sunk into them.

Dicey Dungeons is a bit of a departure, both in its visual design and development. For this project, Terry has recruited some help with artwork, music and extra coding. The core of the game has been souped up considerably since I played the alpha demo back in June.

Dice have always played a major part in every dungeon crawler. Their random rolls have been many a player’s downfall. Previous crawlers have only used their facets as a gameplay system, buried deep into the codebase. They are never shown and only appear as attack hit points or in my experience axe whiffs. Dicey Dungeons has turned this whole premise on its head. The Dice are now front and centre. Not only are all the dice rolls shown but the actual characters are presented as dice-like cubes.

Each character from the currently six available offer a unique play system. The warrior plays in a what would be considered a vanilla style. Two dice and two card slots. The robot doesn’t start with any dice and instead uses a gameshow like a totalizer calculator. Each press of the gizmo’s button produces a die. The initial totalizer has an upper limit. It plays a bit like casino blackjack. If you roll too many big numbers the contraption blows up and removes all your cards. It’s an inventive system, once you get the hang of it, you can unleash some awesome combos. The inventor class is completely bonkers. His creative brain means his boredom levels are sub-zero. After every successful match, he can throw away any current item/gadgets and replace one of them from a random collection of new ones. This negates any reliance on the shops found around the levels. This is both a blessing and a curse. His constant thirst for tinkering means that your loadout is always changing and never static. Requiring to be forever modifying your attack strategies. 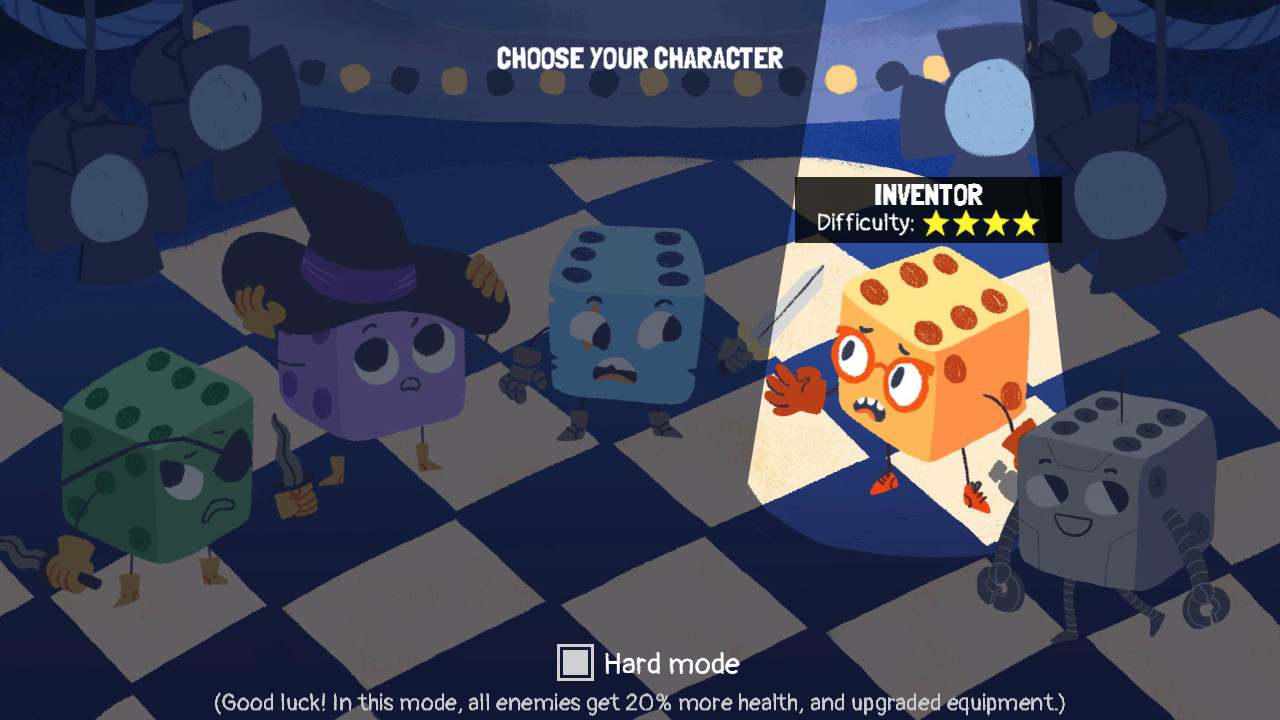 A casual glance at the starting play screen and Dicey Dungeons might look like a rather simple game. The beginner Warrior class starts with two dice and two cards. Dice can then be slotted into the cards, thus activating them. Equipment and item cards can have numerous properties and requirements. Some can be upgraded. I began my first adventure with the aforementioned Warrior class. Their opening cards consisted of a sword and reroll ability. The sword has a max hit point count of five and the reroll can be used three times every turn. Battles are the time-honoured turn-based encounters. Each level of the dungeon is made of nodes which can be freely traversed back and forth. Apart from the enemies, the map is populated with health apples, store vendors, treasure chests and anvils. The anvils act as a weapon upgrade station.

The character loadout box consists of six blocks. Cards come in two sizes taking one or two blocks. Upgrades can shrink the size of major weapons such as axes and sword. This allows you to add extra buff items and shields. By the second dungeon level and with some luck, you’ll have a wide range of attacking and defensive options. If your starting character has limited health points you can sink a load of card slots into fitness buffs and protective measures.

The real meat of the game is in the battles and the strategy behind them. Due to the range of cards on offer and the opponents, there are a vast array of approaches to every encounter. Your backpack is generously capacious. If luck dictates, you can soon have a quite a gamut of weapons and buffs to combine into a fearsome arsenal. There appears to be no limit on how you mix and match your weapons. On one run I was dual wielding both a sword and axe and still had a shield on hand to fend off any returning blows. 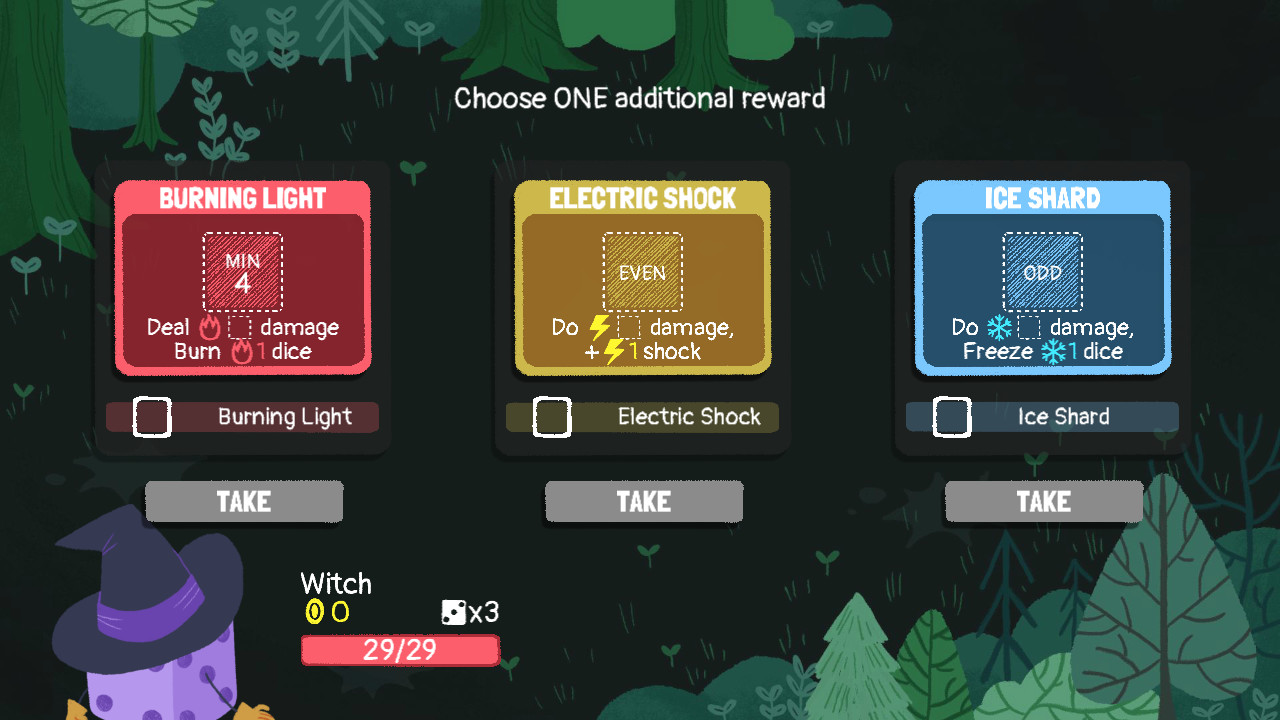 There’s an absolute cavalcade of weird and wacky foes to battle with on your quest to get to the end dungeon boss. Even with my limited play sessions, I encountered all manner of beasties, ranging from the preposterous to the downright goofy. Hotheads, sneezy hedgehogs, henry hoovers, baby squid and errant snowmen are some of the plain daft enemies I’ve met on my travels. None of the stale archetypes you usually find in dungeon crawlers are anywhere to be found. No elves, no orcs or ghouls so far. Each of these antagonists has a unique suite or cards. The sheer inventiveness of both the cards and their effects is quite mind-boggling Obviously a lot of pre-production time has been spent designing these items.

A deeper dive into the cards and their attributes is required to illustrate all the features of the battle system. Let’s start with the basic buffs and debuffs. Poison, flames, freeze and shock are in the roster as the usual suspects. These are supplemented by some truly one of a kind effects such as mystery boxes. The mimic chest uses a card which generates a random card, this can be anything from a fairly mild shard attack to a massive melee blow which can kill you on the spot. 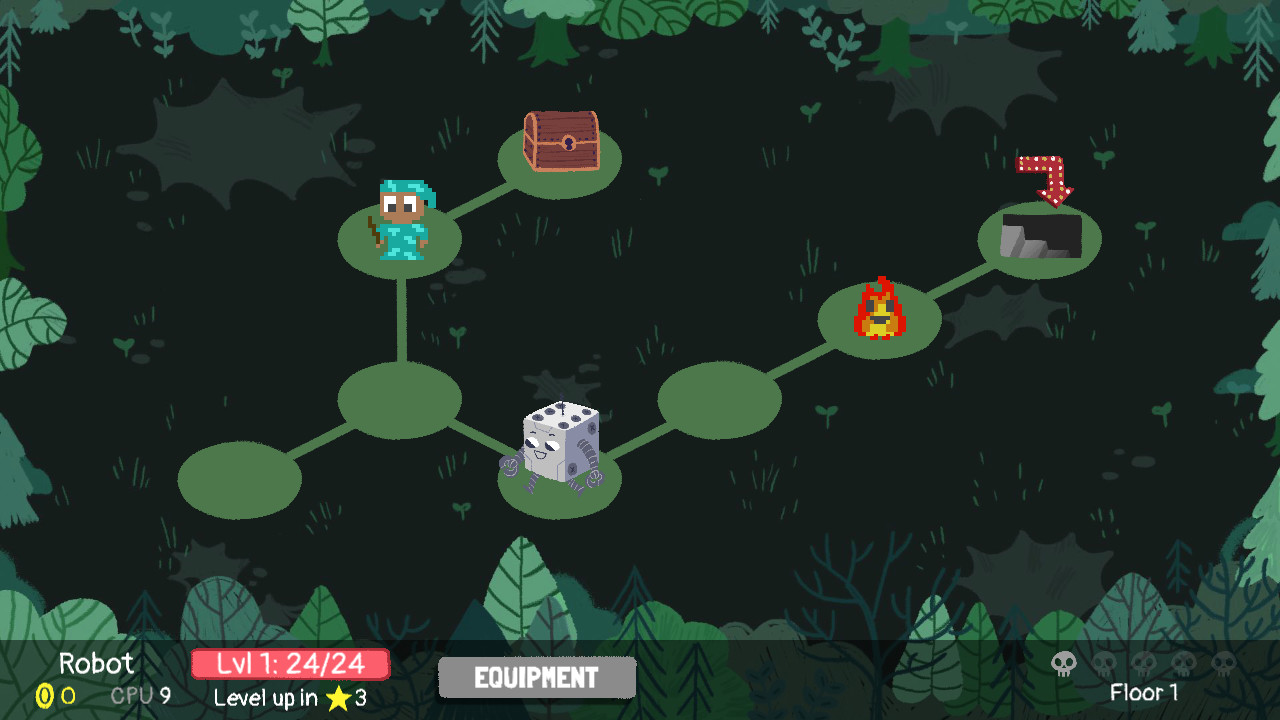 The current PC build has a very basic feature set in terms of graphical and sonic options. The game appears to automatically scale to your desktop resolution. The only way to go to full-screen mode is by using the windows alt+enter command. There’s also a solitary volume slider on the main menu. I guess all this due is to the alpha phase of the project. I’ve no doubt the full release will add support for various visual and audio tweaks, or I at least hope so.

Language support is the one thing that hasn’t been skimped on. The current 0.13 build has 13 different options including English, French, German, Italian, Polish, Spanish, Portuguese, Russian and a few more. 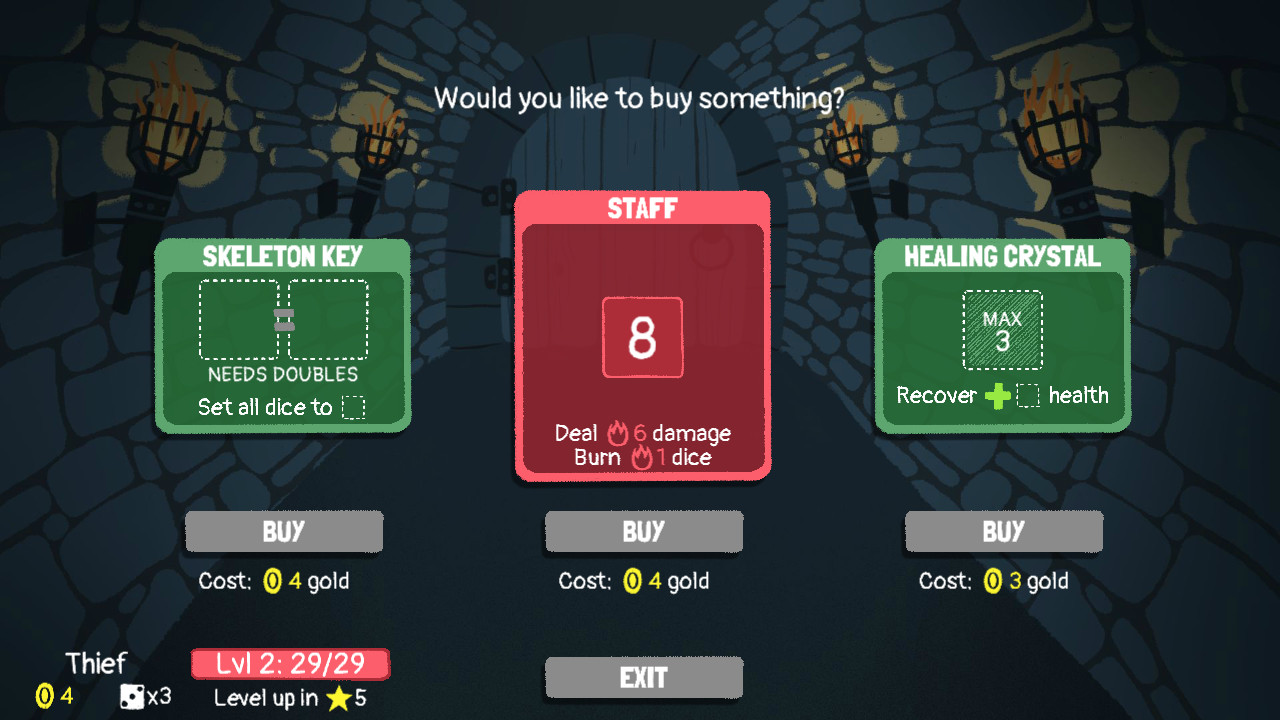 All the art assets have been created by Marlowe Dobbe. She has a great original style which fits the tone of the game perfectly. Her hand-drawn illustrations give the overall aesthetic a quality that evokes a high-end hardback children’s novel. There’s a lightness of touch and an air of silliness that encompasses all her drawings. Drab dice are brought to life with a great use of colour and fine detailing. This gives all the characters an implicit charm. I particularly like the Inventor sprite, looking suitably manic with his hammer at the ready and replete with orange glasses. 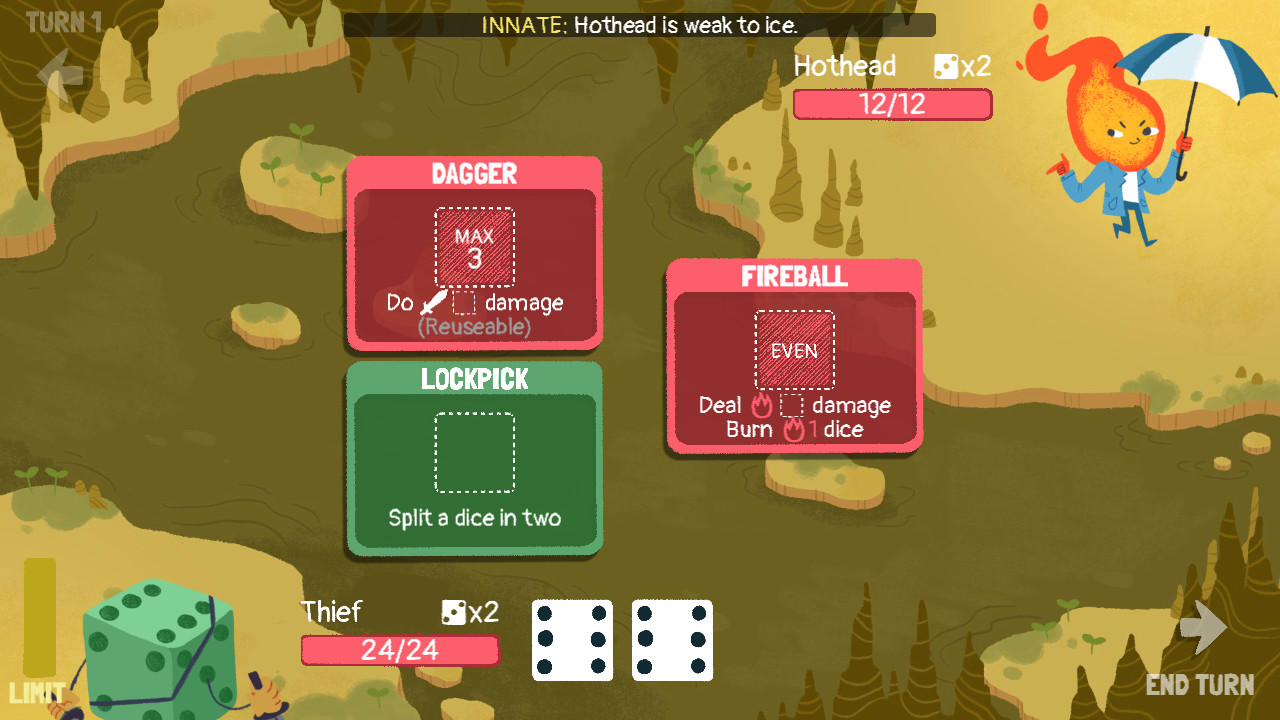 Any fans of chiptune music are going to feel right at home with the soundtrack. Chipzel has composed some of the happiest, toe-tapping and joyous tunes I’ve heard in a long time. The main theme is an amalgam of classic Gameboy bleeps, bloops and arpeggios sat on top of a driving bassline and Simmons four on the floor drum pattern. It’s so catchy it might be a new virus strain. I defy anybody not to smile after listening to it.

As you travel around the map a low pass filter effect muffles the soundtrack, though only when you engage in an encounter does it come back to the forefront in the mix. This is a cool feature and really ramps up the tension.

Battle spot FX are in keeping with the wacky light-hearted aesthetic. Doinks, zips and zaps accompany every weapon strike They sound like they have been ripped straight from a classic roadrunner cartoon(Obviously they haven’t for copyright reasons). Successful endgame skirmishes finish with a satisfying ringing thunk. Which convincingly gives the impression of a massive hammer striking a blacksmith anvil. Its all very entertaining fare and gives the game a very jovial nature. 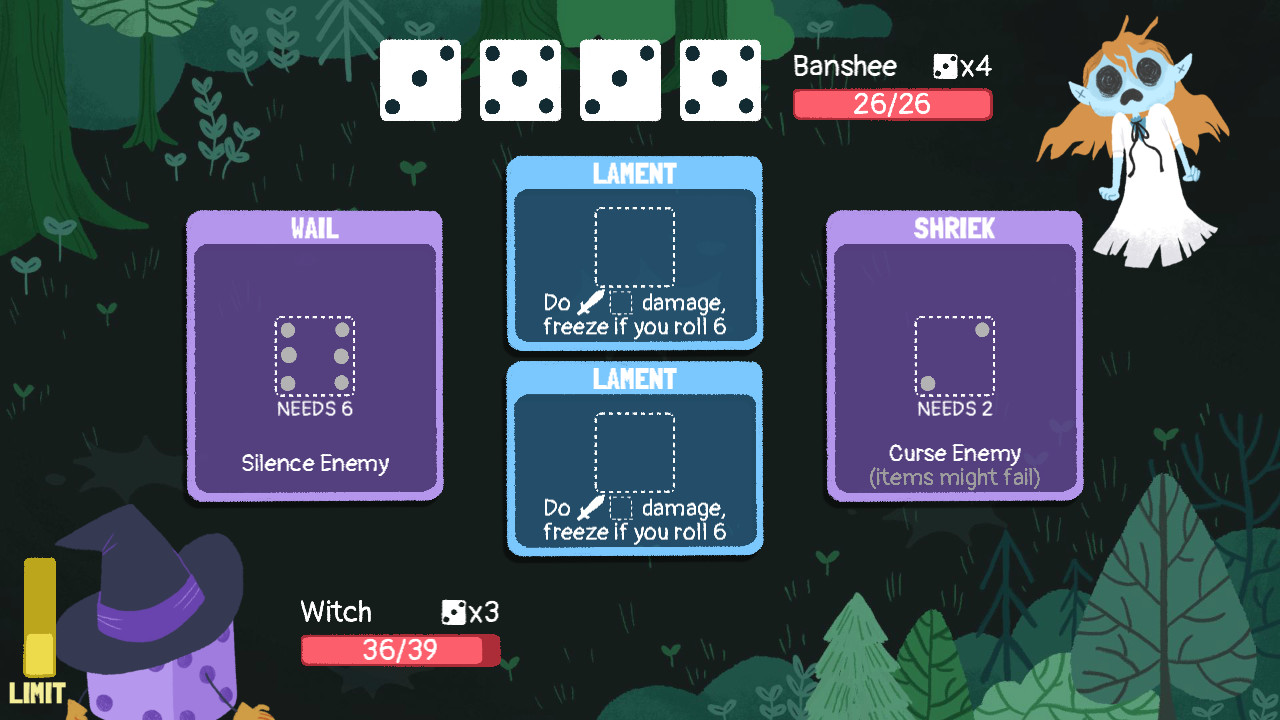 Dicey Dungeons is an interestingly coded beast. You can play the free demo via the web, using either HTML5 or flash. The PC version works and plays exactly the same. Sniffing around the game folder it appears that Terry is using the Haxe Toolkit. I’m no programmer so I could be completely wrong on this front. What I do know is that this is a highly adaptable codebase with future IOS and Android versions planned. Needless to say, it plays silky smooth. I’d wager it would play well on even the most arcane laptop or notebook

Dicey Dungeons is possibly the freshest take on the whole dungeon crawler genre I’ve played for some time. Over the past year, I’ve been blessed with the task of reviewing some really inventive roguelikes, who have added a couple of interesting twists on the classic gameplay. Dicey Dungeons blows the doors off in terms of scope and sheer quantity of novel techniques implemented. The genius idea of making the Dice the star of the show, both from an art style and a gaming perspective is fantastic. Given Terry’s track record and what’s currently been achieved so far in this alpha build, you would be foolish not to roll the dice and pick up this awesome game