ARTICLE: Why an Input Lag reducing patch for Street Fighter V is a huge deal for its community
Add comment
Share:TwitterFacebookRedditPinterestWhatsAppEmail 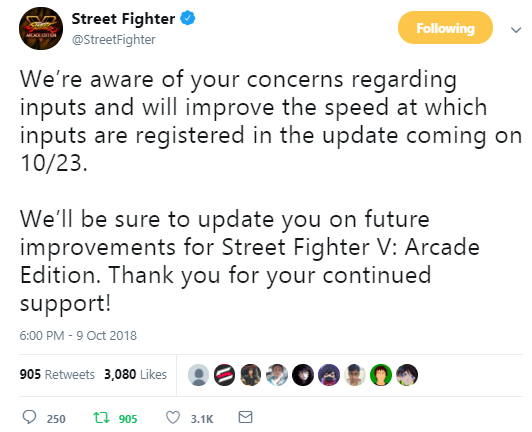 ARTICLE: Why an Input Lag reducing patch for Street Fighter V is a huge deal for its community

Recently, within the niche corners of fighting games, it was announced that Street Fighter V was receiving a reduction in input lag which was just implemented on the 23rd of October. This was actually huge news for all players of the game and since then it has become a hot topic within the community.

This wasn’t the first time this has happened to a game in this genre as its relative Tekken 7 also had the same issue which has already been patched, presumably as the result of Epic optimizing UE4 and reducing the input lag by 2 frames. So as of right now, it’s presumed that Street Fighter V will also finally implement the UE4 optimization.

As to why this is such a big deal? I’ll try to explain in this article.

The explanation of “frames” in the context of fighting games

Fighting games are known to run at 60fps and in fighting games the universally agreed on time measurement is “frames”. The moves and attacks are all measured by frames.

As the game runs at 60fps, a “frame” is as the name implies: a 1/60th of a second as 60 frames are drawn per second. If we convert one frame to milliseconds it would be 16.67 milliseconds. For reference, the average reaction time ranges from 200 milliseconds to 250 milliseconds.

This is a depiction of the “frame data” of Ryu’s crouching Heavy Kick in Super Street Fighter 2 Turbo:

Explanation of the screenshot: The three phases of an attack

The Frame count is the amount of frames the each animation step lasts.

The animations themselves are not important to the players. This is why each attack is simplified into three phases.

Technically speaking, this is the wind up of the move. When you get hit in this phase, a counter hit will occur. The first frame of the next part is added into it, to make calculations easier.

This is the phase where the attack can hurt the opponent. When the red box (hitbox) overlaps with the opponents blue box (hurt box) it will become a hit.

In this phase you are still immovable and have to wait till this is over before your character can be controlled again. It’s a vulnerable phase used for a technique called whiff punishing.

The interaction of both characters on hit or block:

As the sweep incurs a knockdown on the opponent “on hit” the frames for it are omitted. The -9 represents that you are at disadvantage. When the attack gets blocked (“on block”) your opponent can move 9 frames earlier than you.

Depending on the attack, it can leave you open to your opponents attack. If it that happens then it is called a “Punish”, as you are being punished for throwing out an “unsafe” move.

This was just a short look into a part of the “science” on how optimized play works.

What is input lag?

Input lag is the timeframe between your button press and action happening on your screen. So the higher the input lag, the more delayed the action on your screen becomes and the more unresponsive it feels. It is inherent and can only be resolved by the developers of the games.

The current input lag for Street Fighter V lies between 4 to 7 frames, which has been a thorn in the eye of the hardcore fighting community, since the release of the game. It’s also important to note that it had an input lag of 8 frames before an input lag reducing patch was put in place later on.

Other types of lag 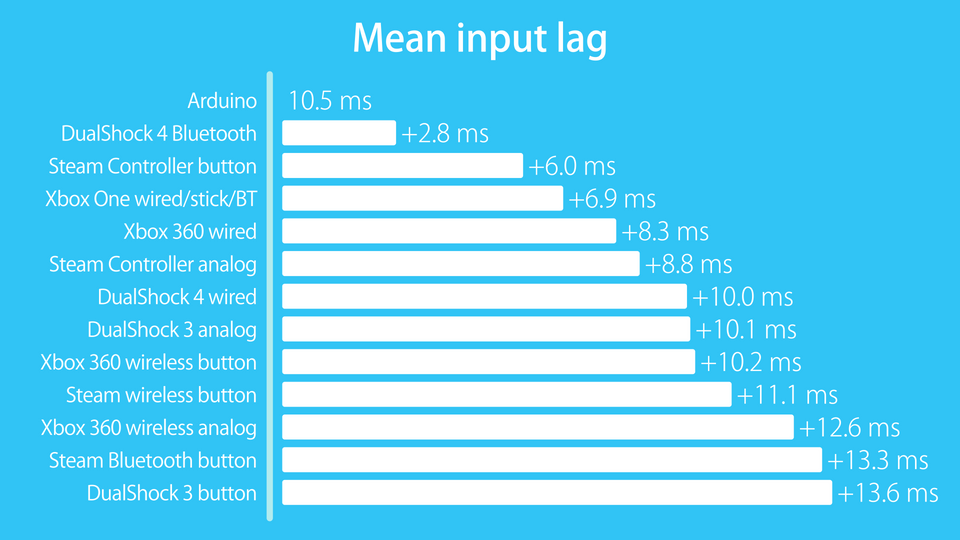 Though controllers also have lag, it’s close to negligible.

Though there is one surprising fact for the PS4 console: The wired mode over USB is actually slower than the wireless mode. 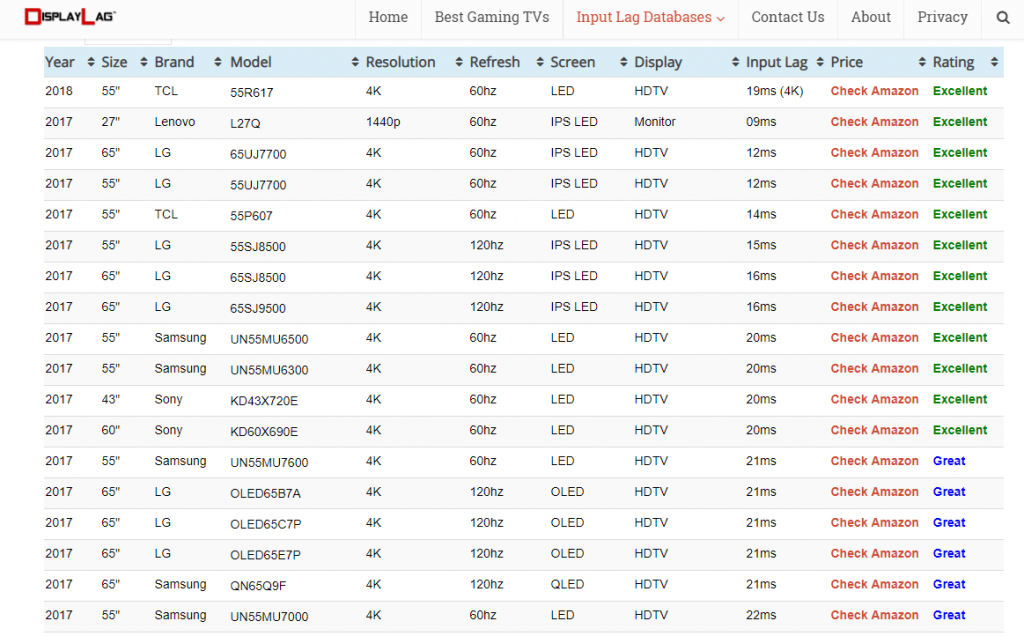 With the introduction of flat screens, we entered an era of TVs that introduce an extra amount of lag. This is obviously not an issue for movies, but possibly something that can effect your time with games. Unlike movies, games are an interactive medium and require a constant interaction between player and the screen.

So if you are playing twitchy games or fighting games, it is recommended to look for TVs or Monitors with low lag. Some of them even have a specific “Game Mode” tailored to that need, reducing the lag further than the standard mode.

Even today, hardcore Super Smash Bros. Melee players are playing the game preferably on CRT, because those do not have this issue.

So in case you want to buy a good TV or Monitor for gaming, there are sites that do test them such as displaylag.com

This is something we all know and hate and I don’t think there is much to say here. Depending on the connection between players/servers the amount can vary heavily.

It is heavily recommended to play multiplayer games on wired connection, because wireless is not as reliable as wired and can result in heavy lag spikes.

When playing online, there will always be some delay, that’s how it works. But it’s important to note that this can be compounded by the inherent input lag and display lag. The first being the developers responsibility and the latter being avoidable by choosing the right TV/Monitor.

Earlier this year fighting game enthusiast and Computer Science PhD Loïc *WydD* Petit found out that Street Fighter V has a kind of Input Lag that wasn’t as noticeable in other games; a variable Input Lag. According to his findings the game cycles every second from 4 frames to 7 frames. This is extremely undesirable, because it is a random factor that has no place in a game that requires precision. 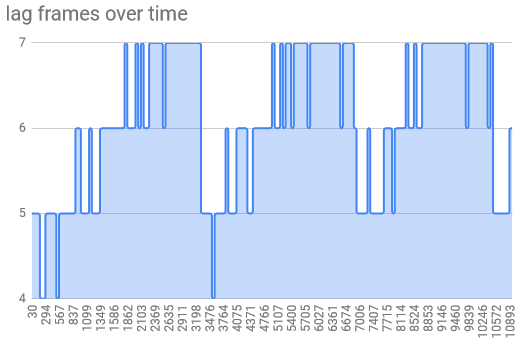 Why variable Input Lag is undesirable

Fighting games are games of precision. The aim is always to reduce the randomness as much as possible. The easiest example is the interaction between characters on block. Some moves are very timing intensive when it comes to punishing them. Other moves can sometimes appear as cheap moves, because they do require precision of timing to actually punish them otherwise players will keep doing them scot free. By punishing those unsafe moves, you convince your opponent to do them less often and thereby reduce one of his options. This in turn gives you less to focus on and thus increase your reaction time to other things instead.

Admittedly, even frame perfect punishes should not be a problem, because SFV introduced an Input Buffer that retains your input for a few frames. This reduces the required precision.

With the existence of variable input lag, it becomes close to impossible to hit the precise timings, if it weren’t for the input buffer.

There are other further examples of how it effects gameplay, but this example should suffice for now.

Though the reduction might seem relatively low, it improves the ability of the player to react to things happening on the screen. But what does it exactly mean? If the game stays the way it is, then players will have a slightly easier time to react to jumps, dashes and a wide slew of attacks. Punishing whiffed attacks might become more of a thing too; blocking projectiles on reaction also becomes slightly easier.

The general feeling is that it will have at least a slight effect on the current balance of the game. Some are even equaling it to a balance patch.

It might also have an additional placebo effect. Who doesn’t know the feeling of “Hey, I reacted to that!”?

Fun fact: When Tekken 7 on consoles still had more lag than on arcades, the Korean hardcore community actually had different tierlists for Console vs Arcade. Just because of the input lag difference.

As much as people are looking forward to the patch, there is sadly no further information outside of that tweet. So the only thing the SFV community can do right now is hoping for the best and expect the worst.