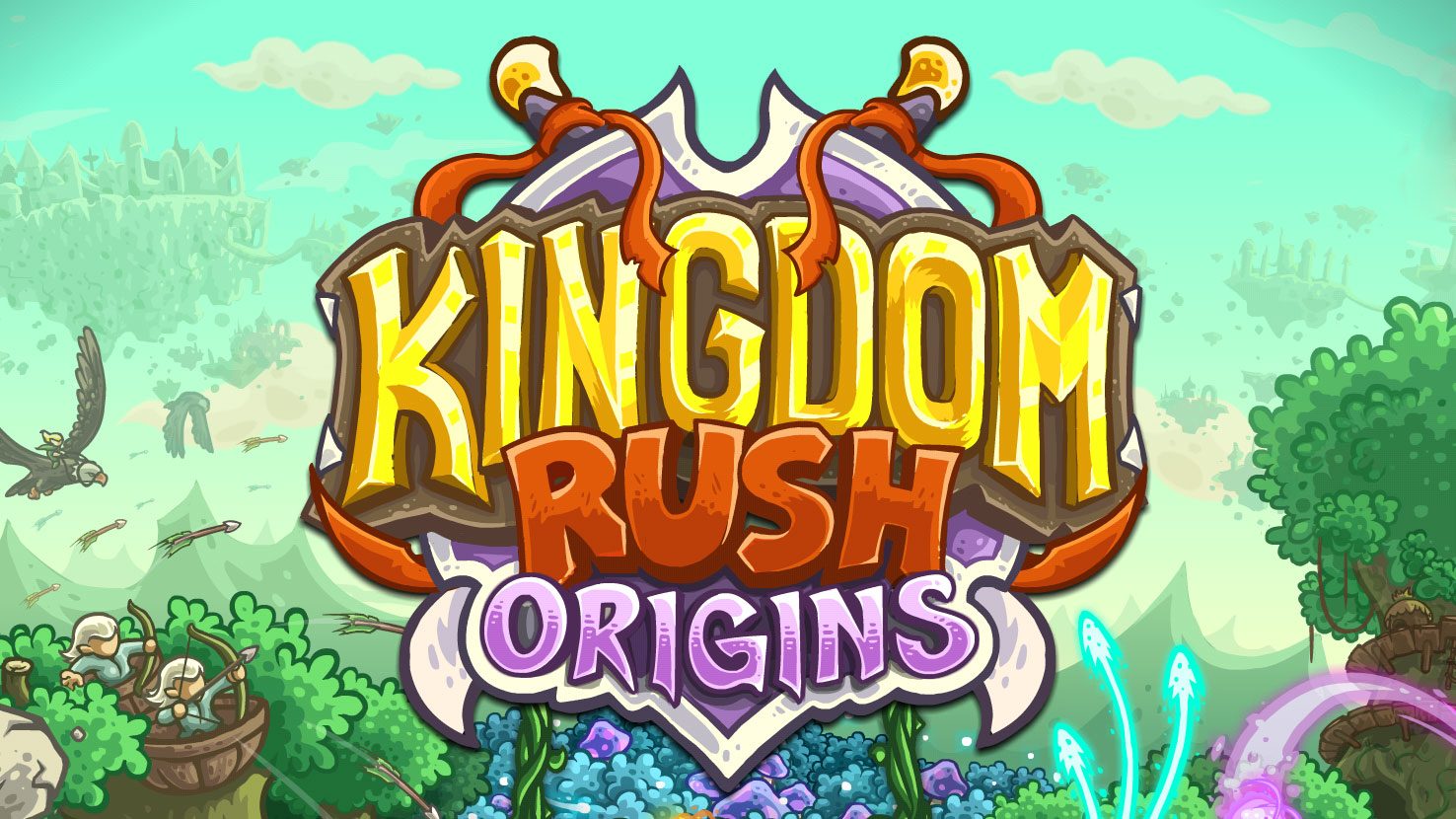 The most addicting tower defence game returns in an all-new prequel adventure – welcome to Kingdom Rush Origins! Fans of the series can now play the game in glorious high definition. But how’s the PC port you ask? Read on..

Kingdom Rush Origins is the third installment of the award-winning Kingdom Rush saga, loved by millions and earning accolades from gamers and critics around the globe. Take a trip back to the beginning, before Vez’nan ever thought to threaten the kingdom with the gem of power, and experience even more of the lightning-fast, exceptionally captivating gameplay that made the franchise a cornerstone of essential tower defence games. In this exciting prequel, command your elven army and defend mystical lands from sea serpents, evil sorcerers, and wave after wave of gnoll tribesmen, all with the help of brand-spanking’ new towers, heroes, and spells to fend off every last baddie.

Kingdom Rush Origins packs in a treasure trove of new content and features while keeping the signature look that millions have come to love. 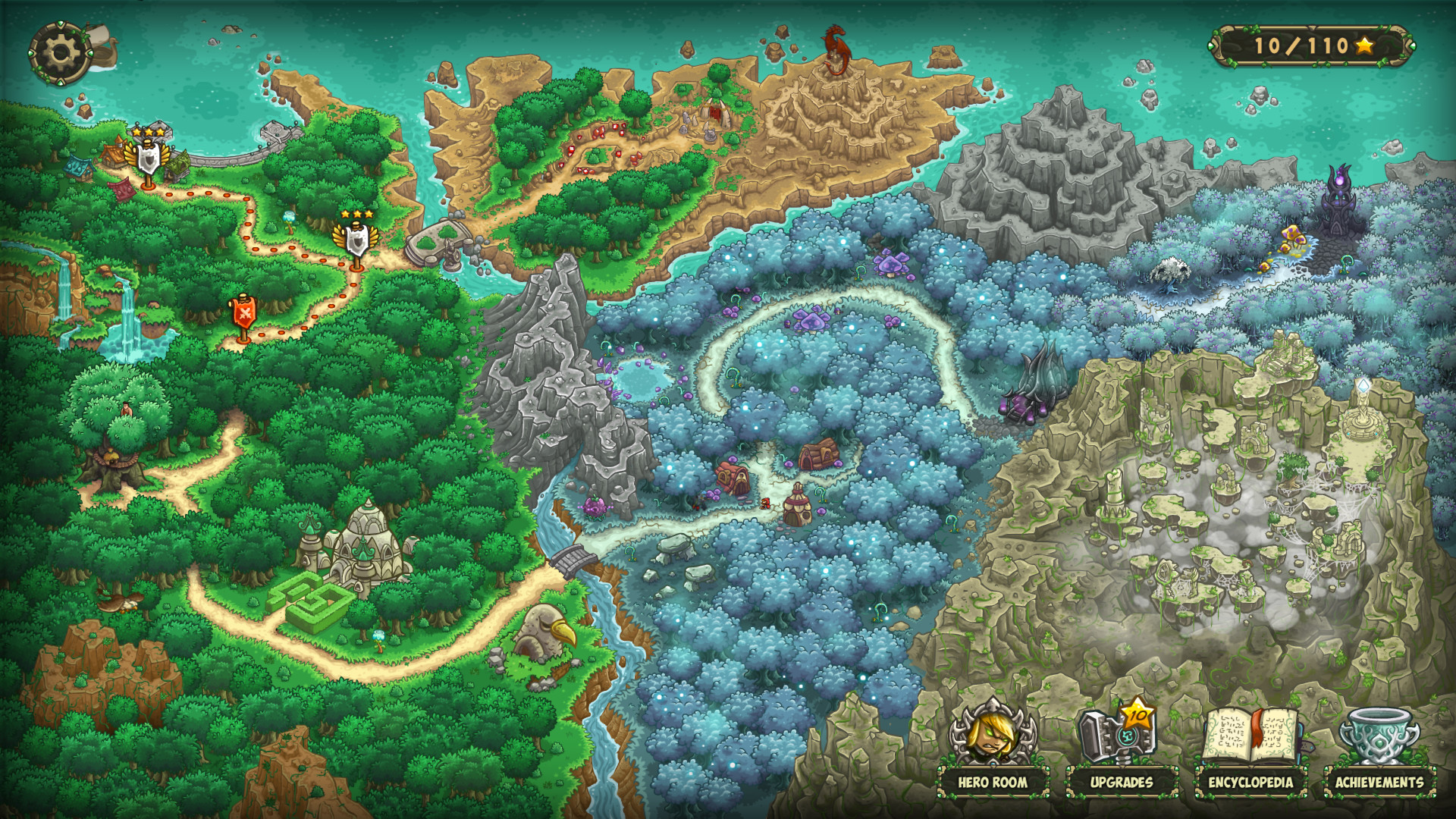 Ironhide Game Studios is based in Montevideo, Uruguay. It was founded way back in 2010, by Alvaro Azofra, Gonzalo Sande, and Pablo Realini. This small team are the creators of the Kingdom Rush Saga series. This is their spin on the classic tower defence genre. They cut their teeth by first developing a web-based model. As of today, the flash version has been played over three hundred million times around the world. 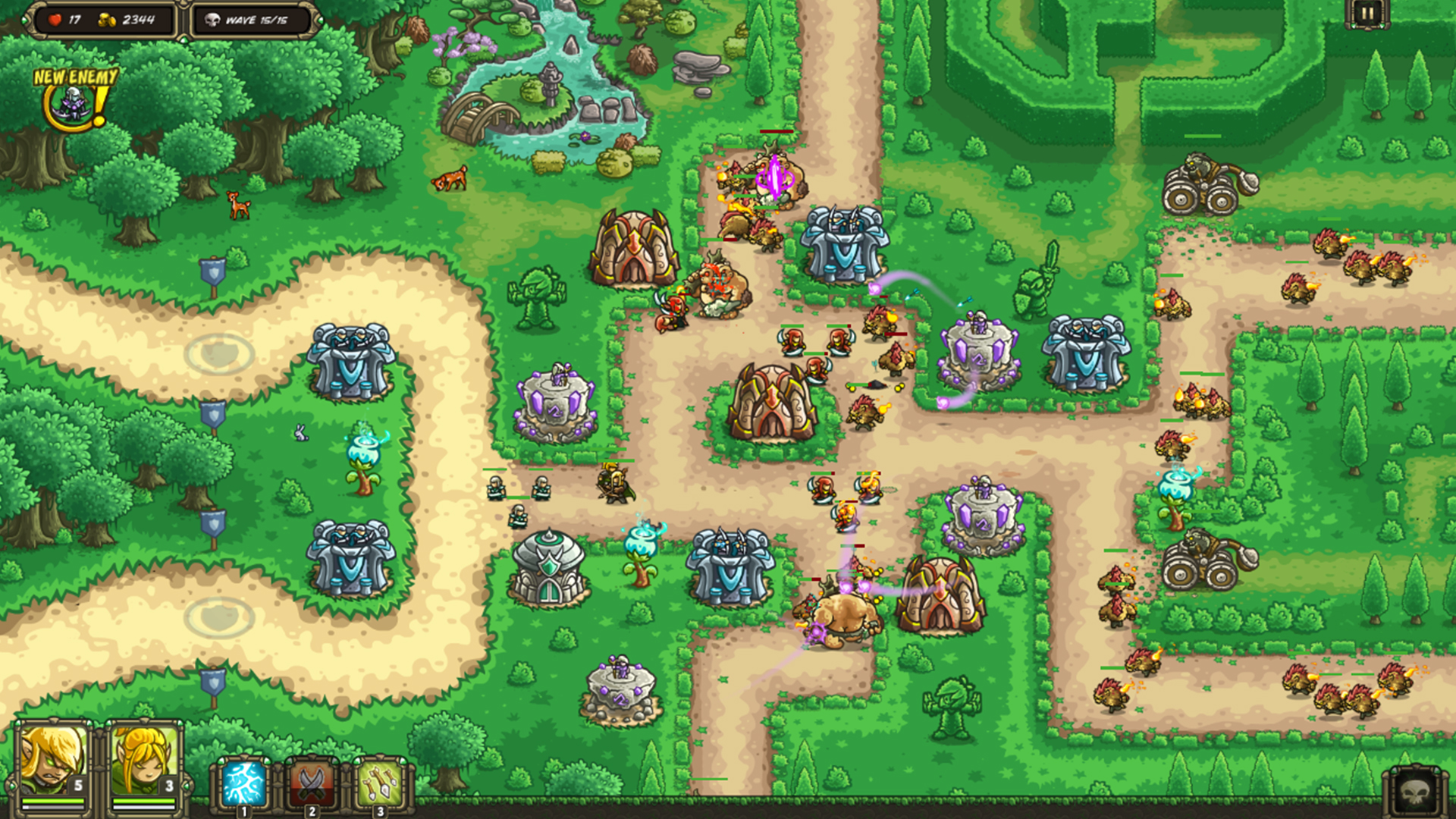 To qualify my thoughts on KRO(Kingdom Rush Origins) I’d just like to state that I’ve played the hell out of the series on all platforms starting out on the IOS, then to Android and finally PC. To me, the Kingdom Rush series is the premier tower defence game. No other game can touch the balance, level design and unit/hero blend. With the team’s primary focus being the mobile market, the PC versions have lagged behind in terms of release dates. So it was to great surprise that I found out recently that the third instalment was coming to the Steam store.

I’ll not dwell on the basic gameplay mechanic of the game. The genre name itself is a completely adequate description. I’m sure even the most casual of games have played one of these titles either on their phone or notebook. For the most, KRO parts sticks to the classic formula. Adding a hero roster and a few mid-mission surprises to keep the whole experience fresh and engaging. For the absolute newbies, there’s a cracking article on Wikipedia that goes into the fine details detailing all you need to know from the genre’s genesis to all the systems/ingredients that make up such a good gaming soup. 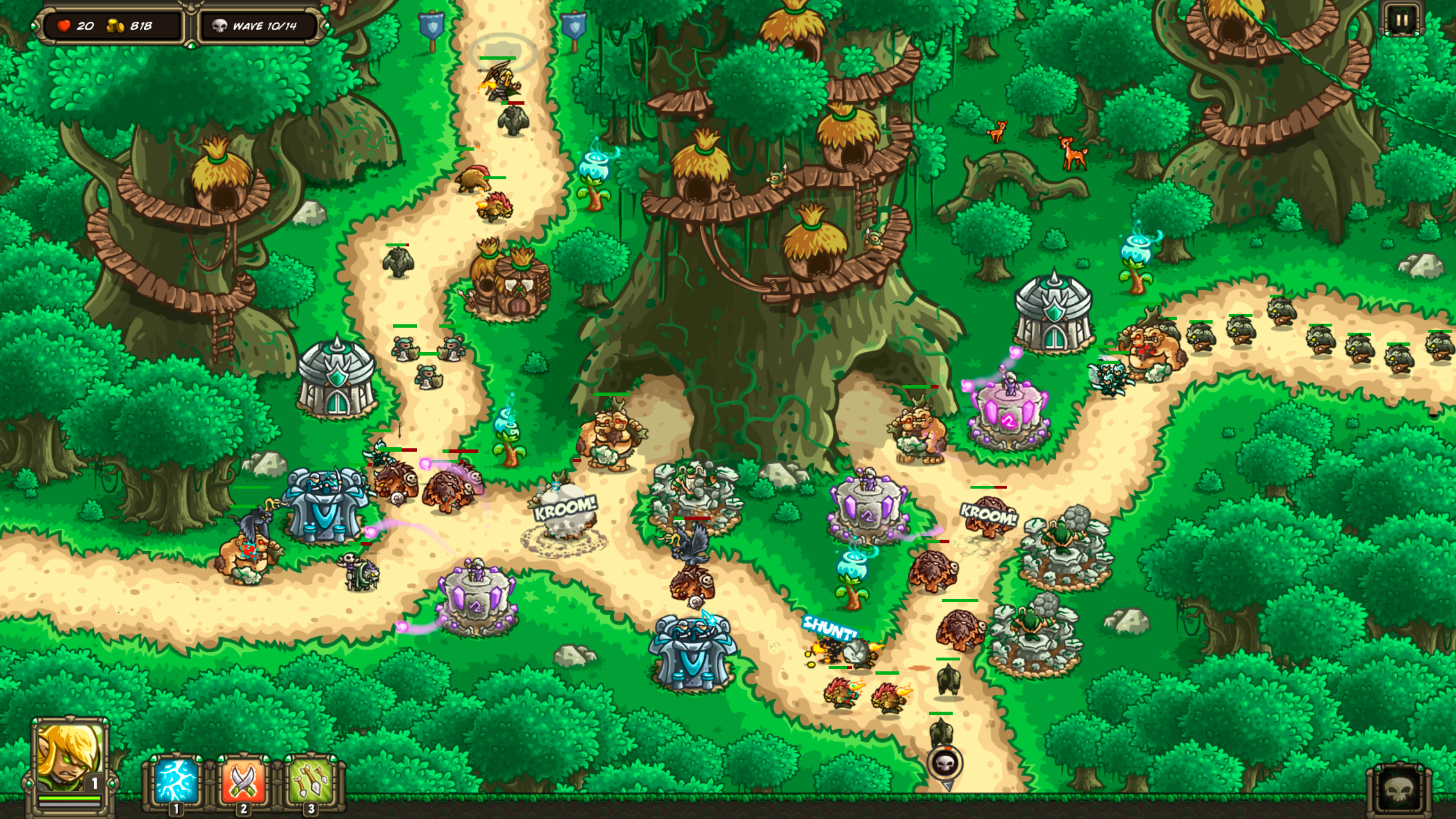 There is a metric tonne of content to delve into. Beyond the sizeable campaign which has 3 separate difficulty levels, ranging from casual to veteran. There’s a host of achievements to unlock. Now, I’m not normally a fan of these in general, but the way there are implemented in KRO is cool and in context. Plus, there are eight pages of the blighters. Knowing I have dispatched nine hundred ghouls back into the dark realm, gives me warm and fuzzy feelings.

Even if you don’t care to complete the whole campaign, you can try your hand at replaying individual missions if you have successfully beaten them with a three-star rating. This unlocks two further modes, Heroic Challenge, and Iron Challenge. These new modes offer different types of challenges, by modifying the waves of enemies, availability of heroes, and limiting tower selections.

Completing missions awards you stars. These can be spent on upgrading towers and troops. Each type of tower has a tech tree where you can sink points, ramping up the effectiveness of your favorite arbiter of death. My “go to” has always been the archers. Their range and area of effect make them the cornerstone of my strategic thinking. Good placement of these towers can be the difference between a silky smooth battle or a chaotic rout. 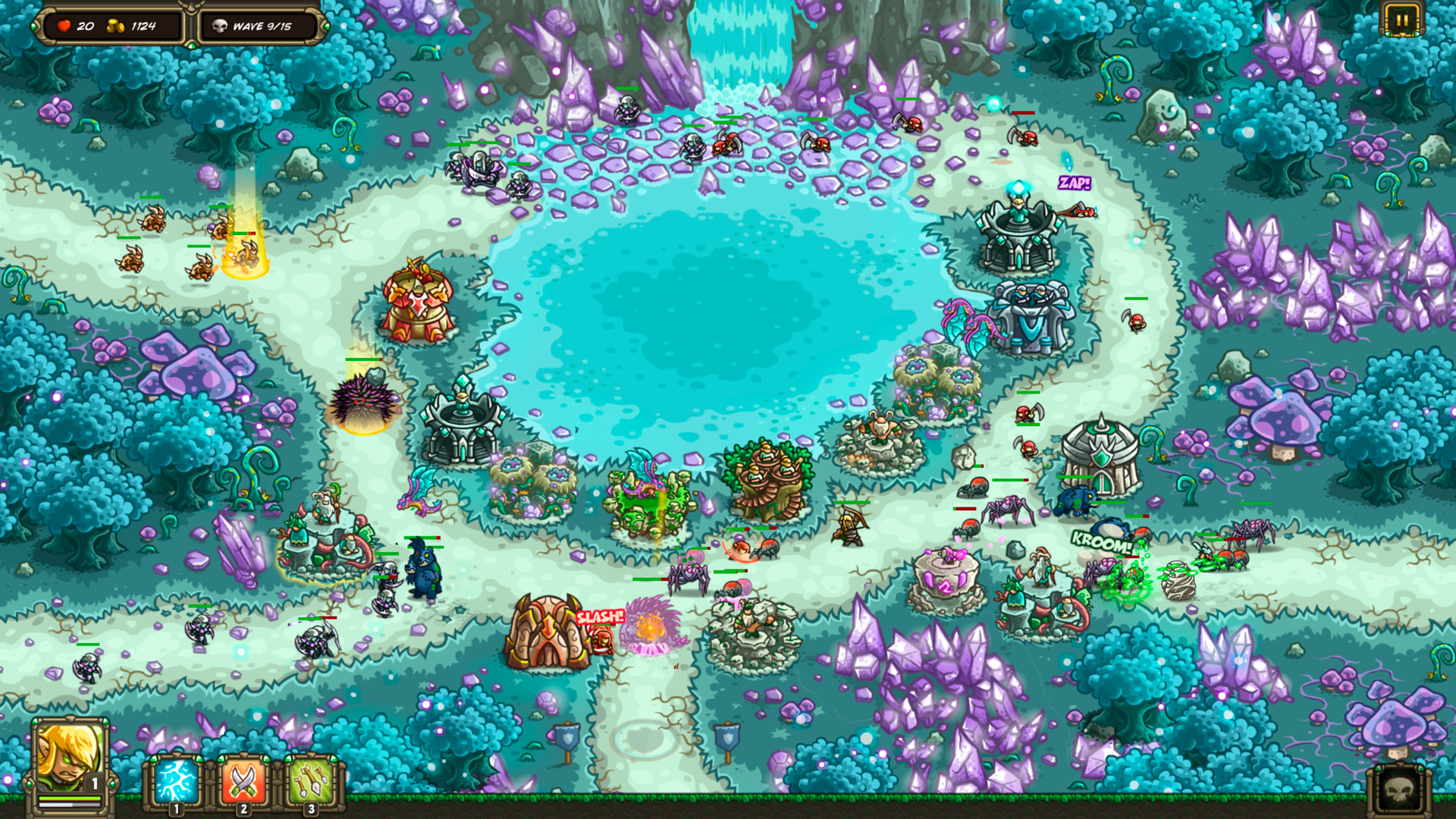 Hero units feature prominently once again. These are the only characters you have dominion over. They can be ordered to move to specific areas of the map. They also gain experience the more they get into the thick of skirmishes. They all have very unique abilities and game styles. Some are excellent as tanks, holding off the demonic hoards and other are better used as a secondary attack, acting like mobile artillery supporting your front line defenses. Initially, you can unlock nine heroes from the promised sixteen. The PC version has none of the in-app payment systems that mobile users have to contend with. I presume KRO will follow the same update path as Frontiers. Where regular patches will add additional missions and characters.

I’m a bit of a weirdo when it comes to character selection. I generally stick with the first hero throughout my first playthrough of the campaign. Getting to know the characters strengths and weaknesses is part of the enjoyment for me. Being that the game is set in an elven kingdom its fitting that Eridan the Ranger is your first commander. I found his bow skills were extremely effective once fully powered up. Lightly armored but speedy, he can unleash a devastating volley of arrows. A fantastic boon when it comes to thinning out well-armored packs of foes. Each new hero plays completely differently so I’m sure there will be one to suit most gamer’s chosen playstyle. 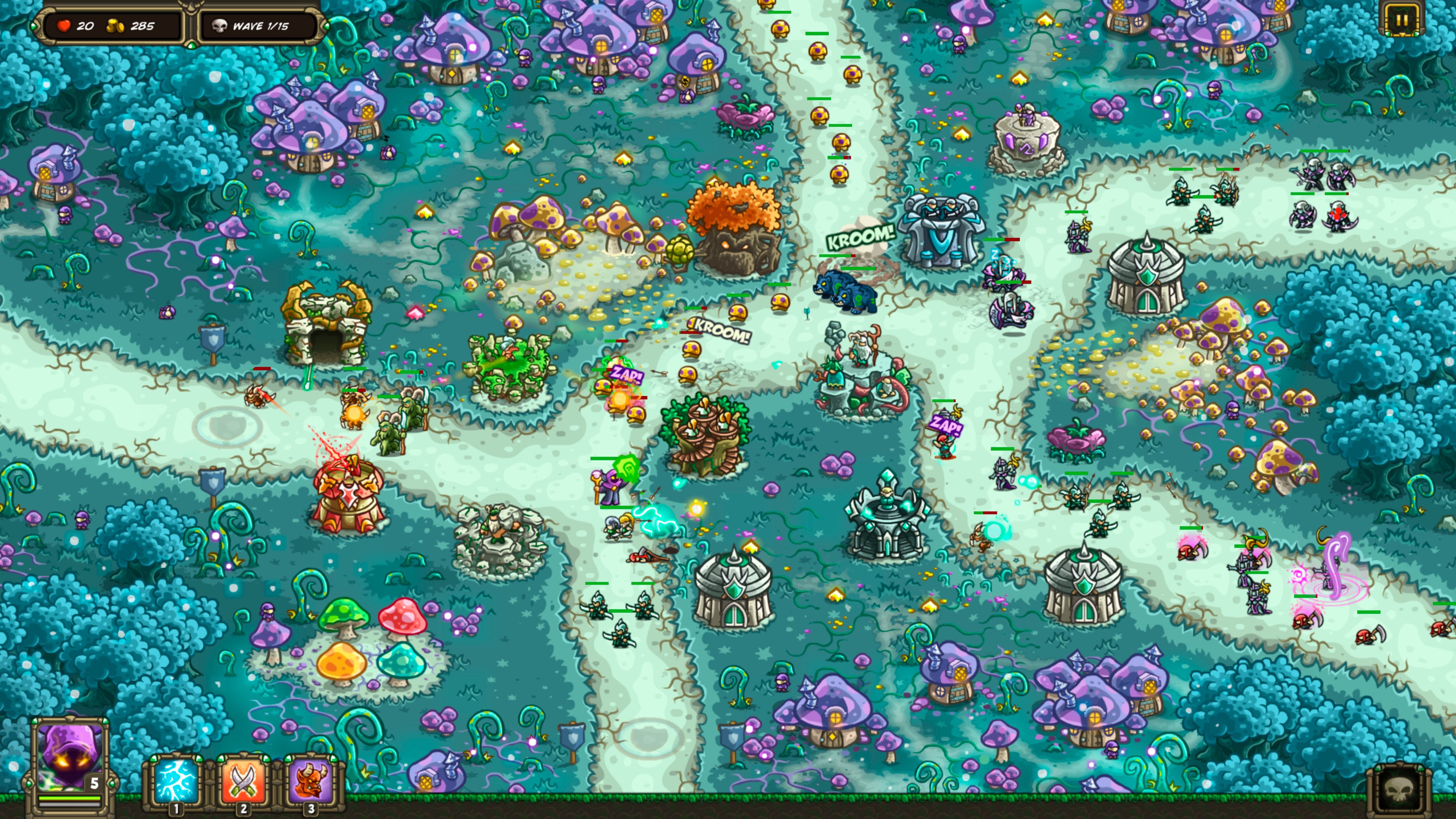 Gonzalo Sande’ artwork really shines with the step up to the PC format. Sure, the game has always looked good on the mobile platform, but only now can you enjoy the superbly colorful world in true high definition. Vibrant verdant green elven forests transpose into blue-hued magical fairy glades as you traverse the world. Later on into your adventure, you encounter floating ruins which evoke images of a long lost ancient Mayan style empire, all crumbling architecture, sorcerers stones and mystical carved discs like plinths.

The minute details come alive on the big screen. Levels are embellished with many decorative and interactive elements. These can take the form of animated wildlife such as deer, rabbits and flocks of migrating birds. You can see the designers had a lot of fun enriching the playfield with lots of nods to popular culture. One of the early forest missions has a cascading waterfall and river system dissecting the pathway. Occasionally a yellow submarine would appear, clicking on it makes the craft surface and the conning tower hatch to open. Three notes of a very well known song would then play. Deeper into the faery woodland you find a clearing with four brightly colored mushrooms. Clicking on a nearby gnome activates a random four-note / flashing light sequence on the fungi. By repeating the pattern you are rewarded with some gold coins. The sequence can then be retriggered with extra notes. Simon says, anyone? 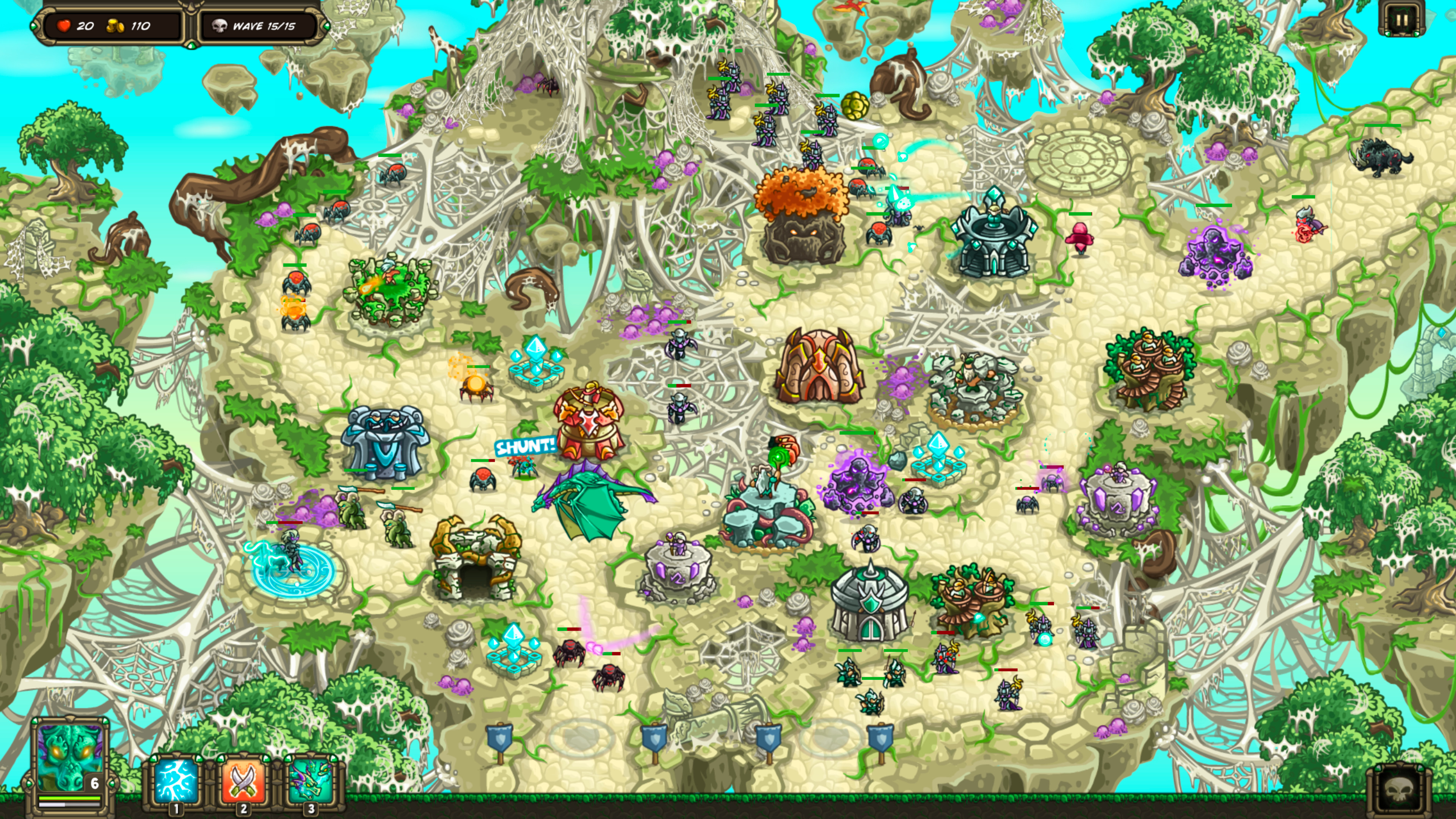 KRO has a sweeping majestic orchestral soundtrack. The main theme has a haunting pan pipe melody. This is underpinned by a full choral choir and timpani drum swell. French horns add extra texture with a superb countermelody. This built on church organ and string section chords. Its a grand piece of music and would not be out of place in a Lord of the Rings movie finale.

Ironhide has made a great choice of enlisting the people over at Kalio to port the PC version once again. I also think using the Love 2D engine over Unity has produced a far superior product. Gone are the long load times of the first game. The game scales well and plays butter smooth on my aging laptop and modest spec custom PC. The graphics options have been expanded on and now offer many resolutions to cover most hardware. I like the option to lock the framerate to 60.

A lot of the hardcore, fanbase have been crying out for a fast-forward or time advance feature complaining that some missions outstay their welcome and drag on far too much. Sure you can trigger new waves early but this doesn’t seem to appease certain sections of the fandom with either ADHD issues or a complete lack of patience. For me, This feature would disrupt the natural flow of the game. Even though the game demands crucial time management and swift key presses it stills put me in a zen-like state. Time melts away and I find the whole experience rather relaxing and therapeutic.

The game can be played exclusively with a mouse. The precision of this defacto bit of computer hardware gives the player all the input fidelity they need. Commanding your hero to points on the map and adjusting barrack spawn locations is a breeze. Unleashing your character special powers is a joy. No fumbling mobile device touch gestures to put up with here. Keyboard warriors are also catered for with suite of key shortcuts. 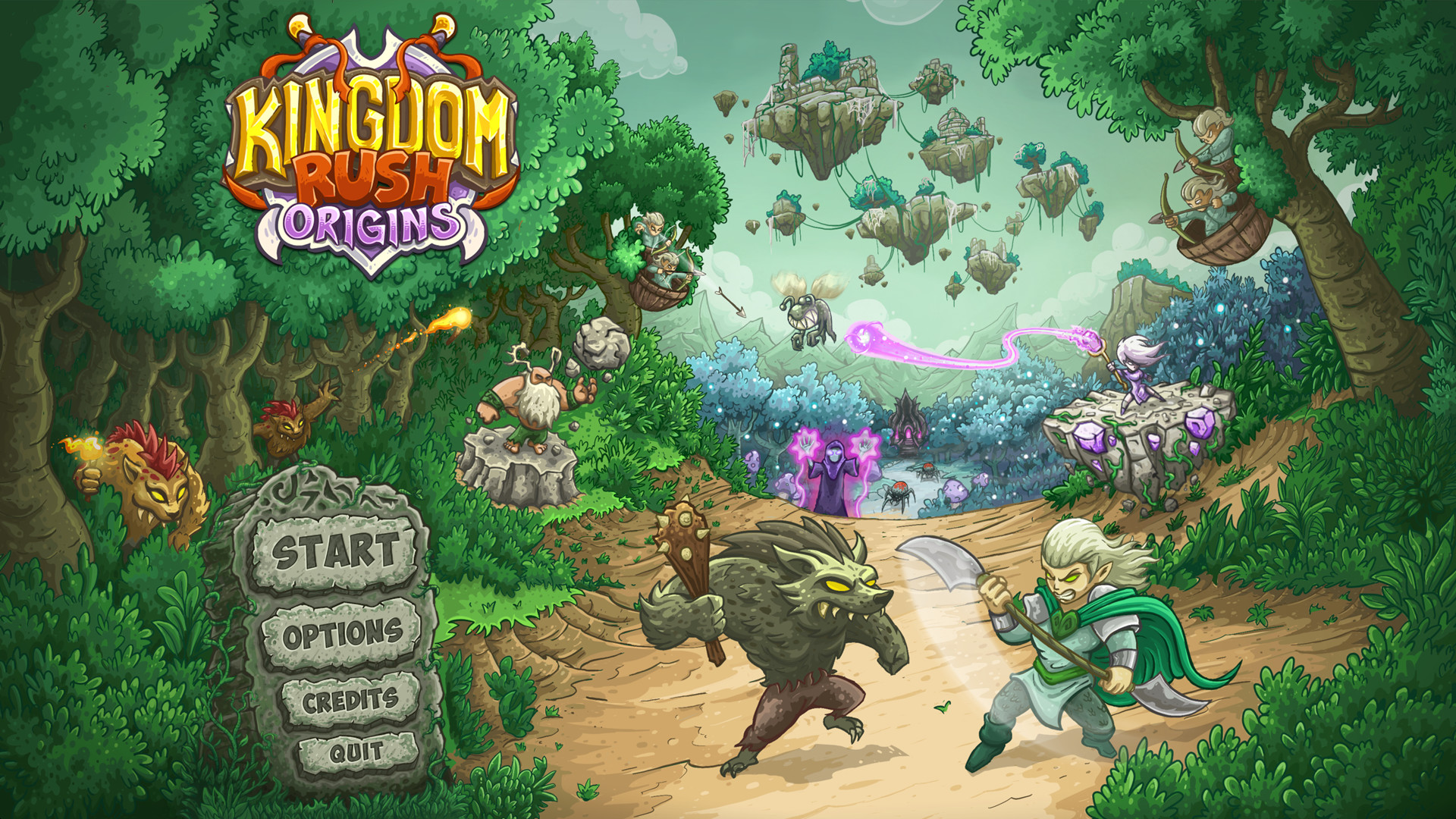 Ironhide in conjunction with Kalio has produced a solid PC port. You’d think by this third installment of the series, the content and premise might be getting a little stale, but for me, the franchise seems to be going from strength to strength. Almost like a mid-era Beatles album, its chock full of bold and new inventive ideas. Mission arenas morph as new paths and interactive elements are unveiled. This keeps things fresh and inviting. The opening Hero roster has a lot of variety. There’s plenty on offer here for diehard fans and newcomers. KRO is the premier tower defense experience. Ironhide is on the top of their game. Pale imitators stand aside. Do yourself a favor and except no substitute, but don’t get caught in the rush.