When Psygineer reviewed this game on PC back in August 2017, he concluded that “if you are looking for a relaxing game to help unwind after a stressful day or hard gaming sessions, then Yonder: The Cloud Catcher Chronicles has the potential to be that for you”. Prideful Sloth has now brought the same experience to the Switch, but does the slow-crawling open-world adventure game manifest the same way when brought on the go?

A World of Yonder

You can’t talk about this game without bringing up it’s seemingly large island. With multiple biomes and it’s populated wildlife, it’s easy to buy into exploring such a world despite the simplistic textures and strange-looking character models. Like The Legend of Zelda: Breath of the Wild, the game invites you to explore the moment you walk out of a cave (following a shipwreck) by displaying a shot of the large, lush grasses ahead for you to run around in. There’s a good level of intrigue as to what the island is and the game doesn’t shy away from dumping bits of lore and plenty of secrets and new locations to run around in. 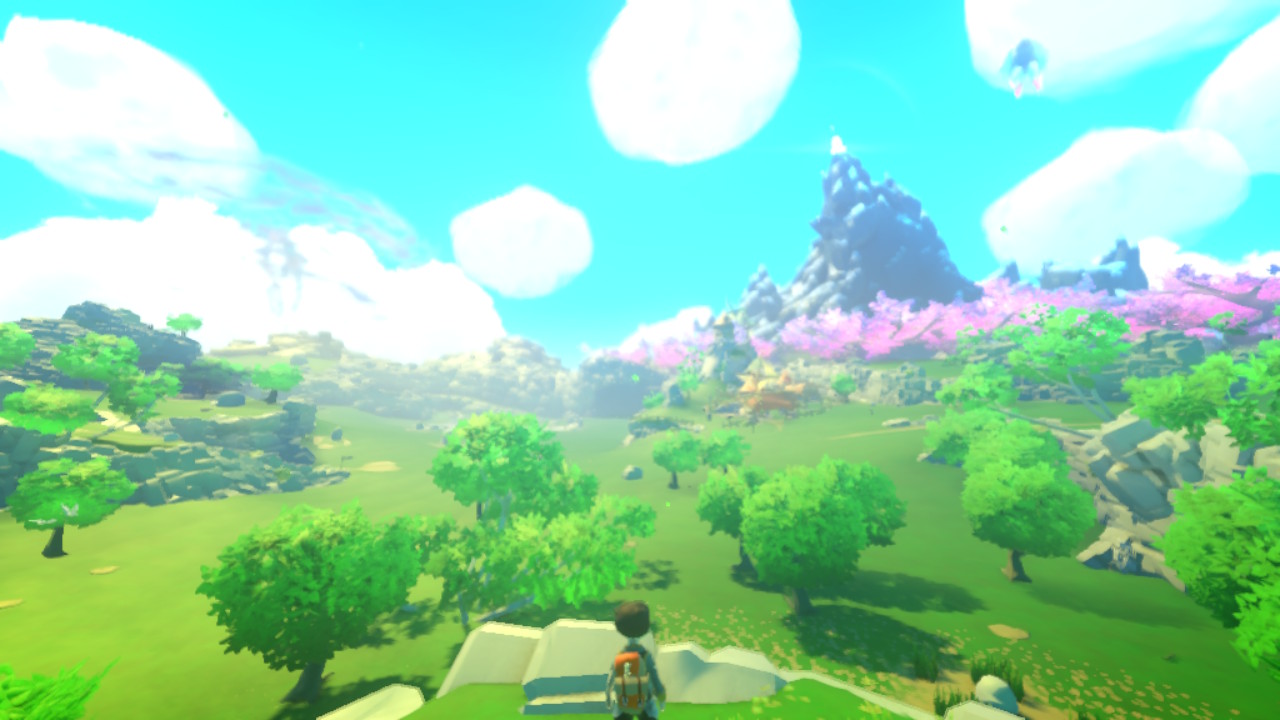 Although the game’s presentation is one of intrigue, it mostly emphasizes a calm, passive adventure. The music is soft and relaxing, with the game giving more weight to ambient, natural sound design. Like Psygineer pointed out, however, it can get really irritating hearing the constant rustling and jingling of your character’s enormously sized backpack (that can of course, carry a couple hundred planks of wood and a couple tons worth of stone). For Nintendo fans, it’d be hard not to experience vibes similar to that of the exploration in Breath of the Wild, running around a bunch of empty grasslands filled with wildlife and trees while looking for a new, interesting adventure to run into. The feeling of getting lost, seeing new and interesting locales, and of course, finding a lot of cats is the hook of Yonder: Cloud Catcher Chronicles, and it is undeniably successful despite some holes in the presentation. 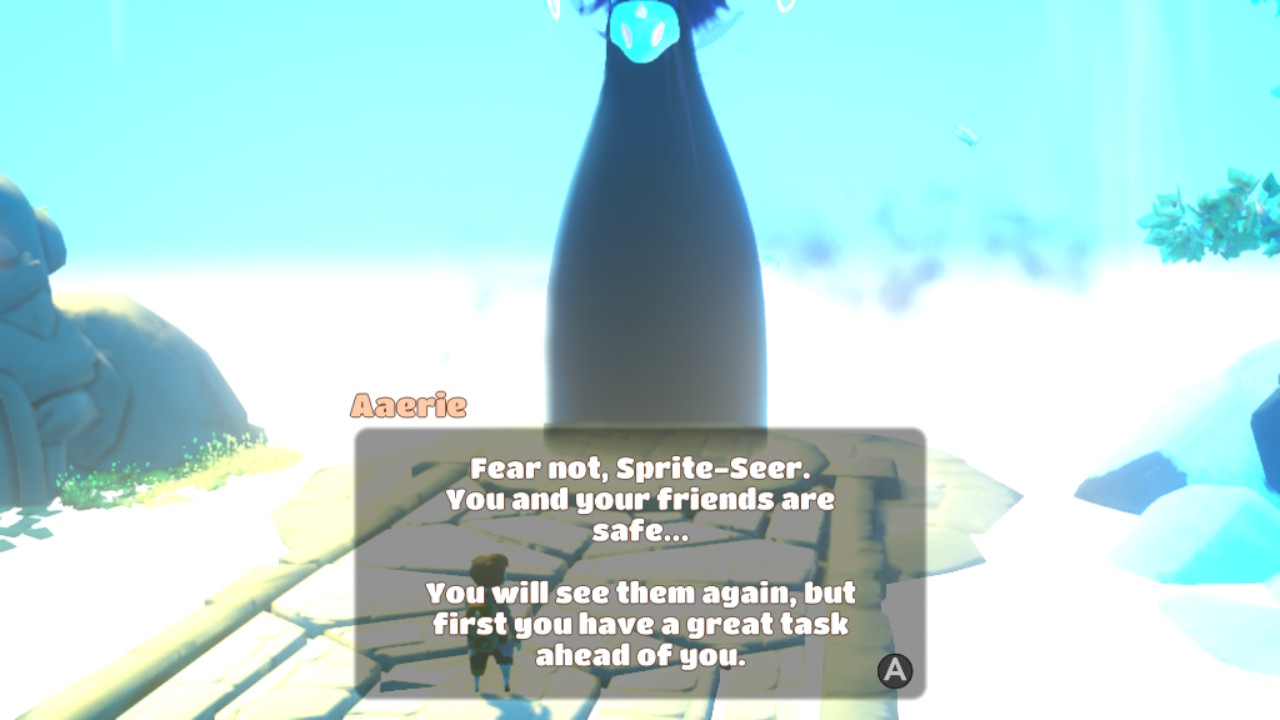 I wish I could say the same about actually playing the game however, as the controls and movement in the game are horrible. Your character stops accelerating when you turn, making any analogue movement a hassle, and the jump in the game feels sluggish and clunky. The camera has a lot of configurable options in the settings but I never felt comfortable with the position it was from my character.The UI is serviceable at best and slow at worst. Animations when using tools like the axe feel strange and often jarring, as your character gets stuck for several frames in the same pose before swinging another hit at a tree or rock. 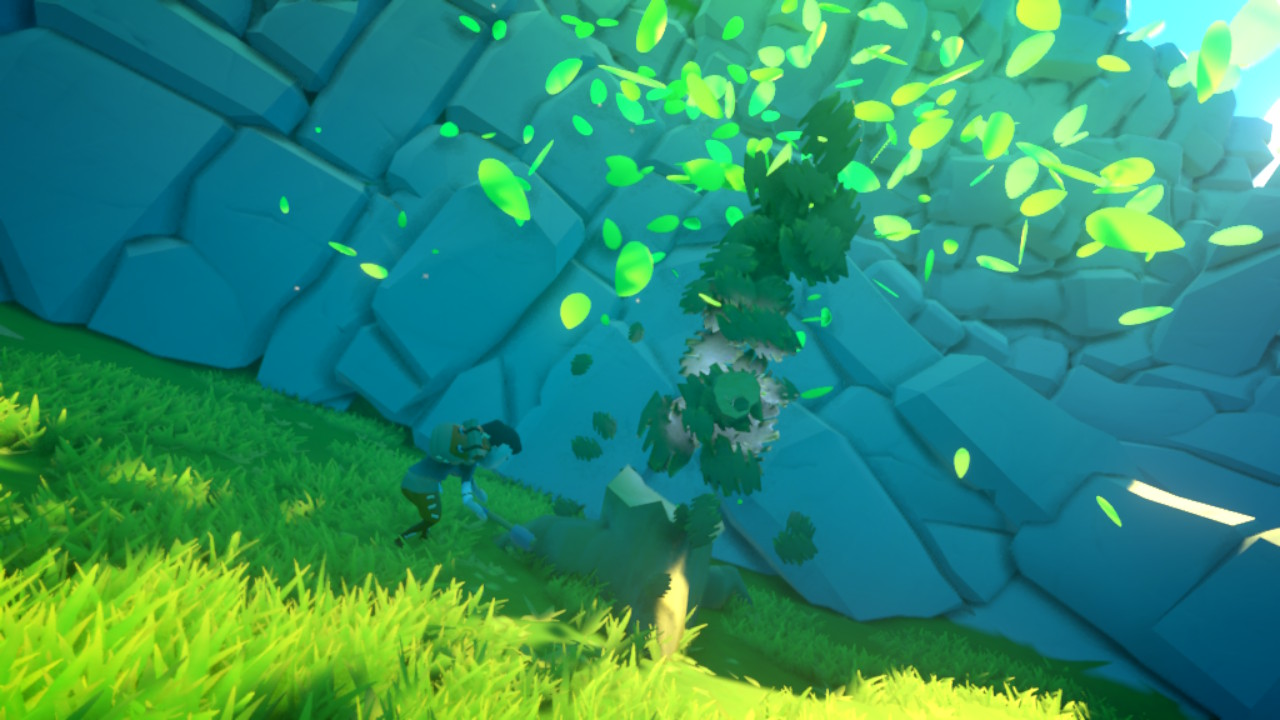 Yonder’s main quest is a collectathon where you go around finding sprites to eliminate a strange force known as the Murk, restoring the island and getting you back home. If that doesn’t excite you, then you can also go fishing, farming, raise animals, and craft various items to trade with the many villagers. They’re all fun activities, but the huge problem is that without any inherent level of challenge beyond simple fetch quests and crafting, Yonder is snore-inducingly easy. While it does work better for a younger audience that tend to struggle with more complex games, there’s no challenge to any of the main adventure or activities beyond fetching items and performing incredibly basic tasks. Perhaps adding a level of time management or more mechanics relating to the game’s weather and day/night cycle (beyond different things spawning in at different conditions, such as a energy mechanic or the weather/time allowing for different types of movements or negative punishments) would spice things up. 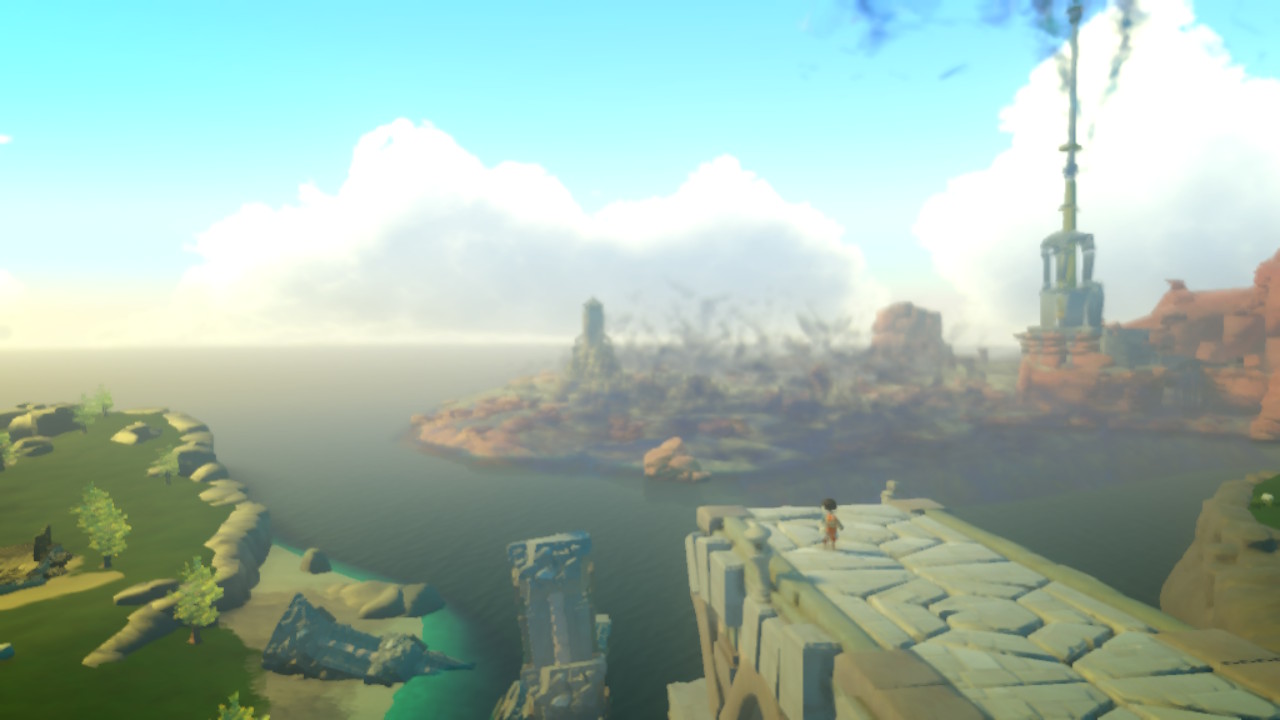 But maybe that’s the point. Maybe Yonder doesn’t want to be a game where you have to account for many different things and as a result play an incredibly frustrating experience. It’s surprisingly refreshing to play a game that’s relaxing and allows you to work towards goals that are not aggravating or stressful to achieve. As I’ve said earlier, the calmness of the world makes for a pleasant and enjoyable aspect of the game that does (at times) make up for it’s seemingly weak gameplay. Yonder achieves this best when you’re working towards a simple fetch quest, mindlessly relaxing and playing while watching the latest episode of some anime or listening to your Spotify playlist. But Yonder then starts to be more of a supplement to enjoy while time-killing than a full game I actively enjoy playing. It really can be boring when you’re looking for something more engaging to play. 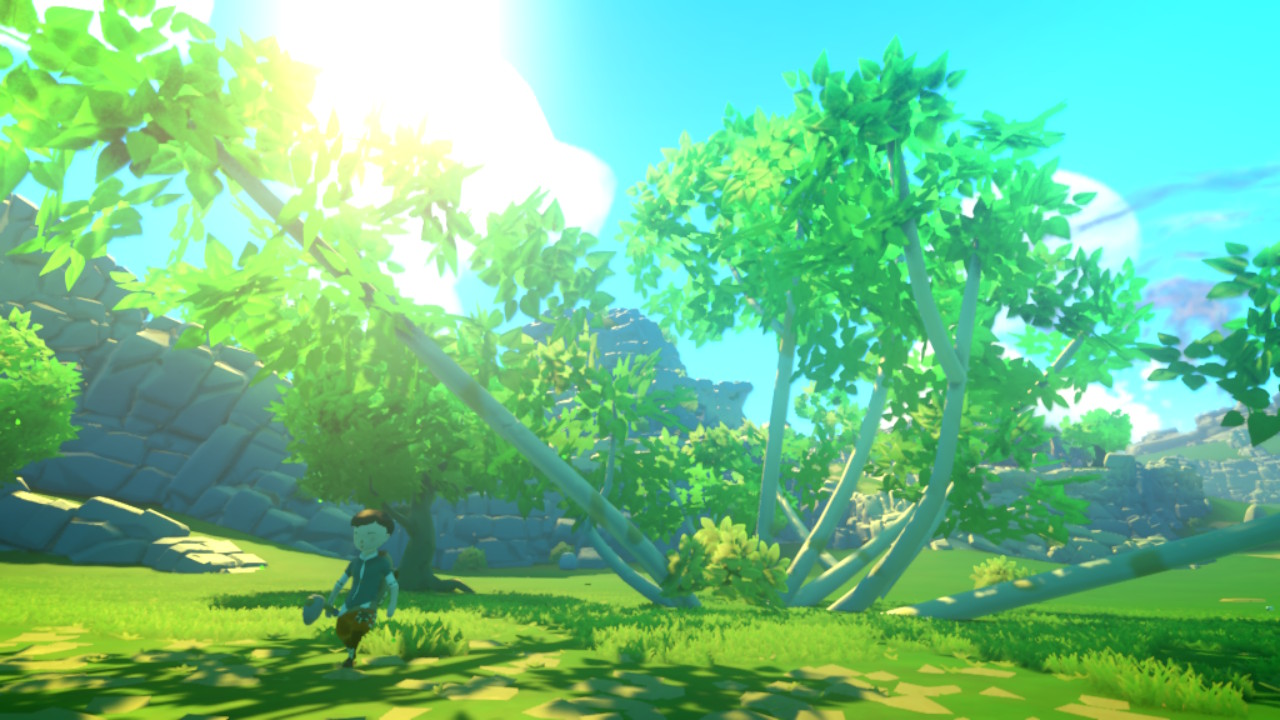 So the game’s still really good looking on the Nintendo Switch, but now everything is a lot blurrier. The texture still look good, the lighting is still great, but everything is just displayed at such a low resolution that the texture detail and smoothed edges (anti-aliasing) suffer. Despite this, the game still looks absolutely awesome on handheld as you’re still getting a decent looking game with the beautiful environments and weather effects intact. I do recommend turning down the bloom as it is fairly low quality on the Switch, and the game is much easier to see without it on or being set at a high setting. Framerates tends to fluctuate a lot but given the kind of game Yonder is, it’s not actually a huge negative. Although I would had liked it to run smoother (especially when you’re using the UI), it’s playable enough to not be a terrible experience. 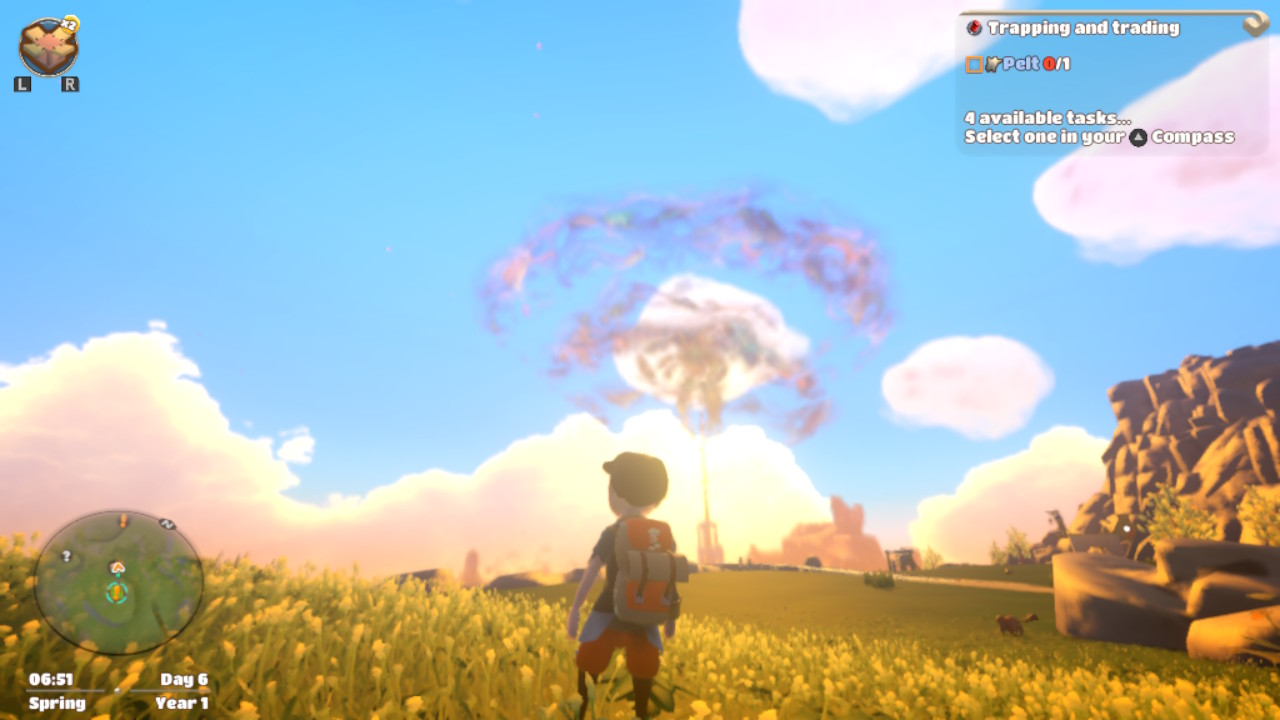 For better or worse, the Switch version of the game is otherwise the same game, but now portable! As with all Switch games, portability does make games meant to be enjoyed in longer sessions easier to play through. Yonder isn’t an exceptionally long game, clocking in at only a handful of hours if you rush through the main story, but it’s hard to find it as immensely boring as it would be sitting on your computer for hours when you’re playing it at short 30-minute intervals throughout a week. I’d say I enjoyed it a lot more because I got to bring it around with me while at school, on the way to a restaurant, or in bed, and that, everyone, is the magic of the Switch.

Also, as a bit of a disclaimer, the screenshots of the game present on the eShop do not match the visual quality of the game itself. Those screenshots were originally made for the PC version of the game. The screenshots in this review were taken by me and is what the game looks like in handheld mode (doesn’t look much different in docked).

Yonder isn’t a terrible experience but it could had been so much more than a fun world wrapped in a boring main quest and side activities that are enjoyable but don’t motivate the player enough to keep playing. It succeeds at offering a non-violent adventure attracting those of all ages, but I often find it more boring than I do relaxing, so I’m really not too sure if I absolutely recommend the game. But for the crowd that’d be into it (younger players and those looking for a frustration-free adventure), you’re not going to see much wrong with picking it up. The Switch version looks blurry and runs worse, but you’ll probably get a bigger kick out of taking such a game on the go.