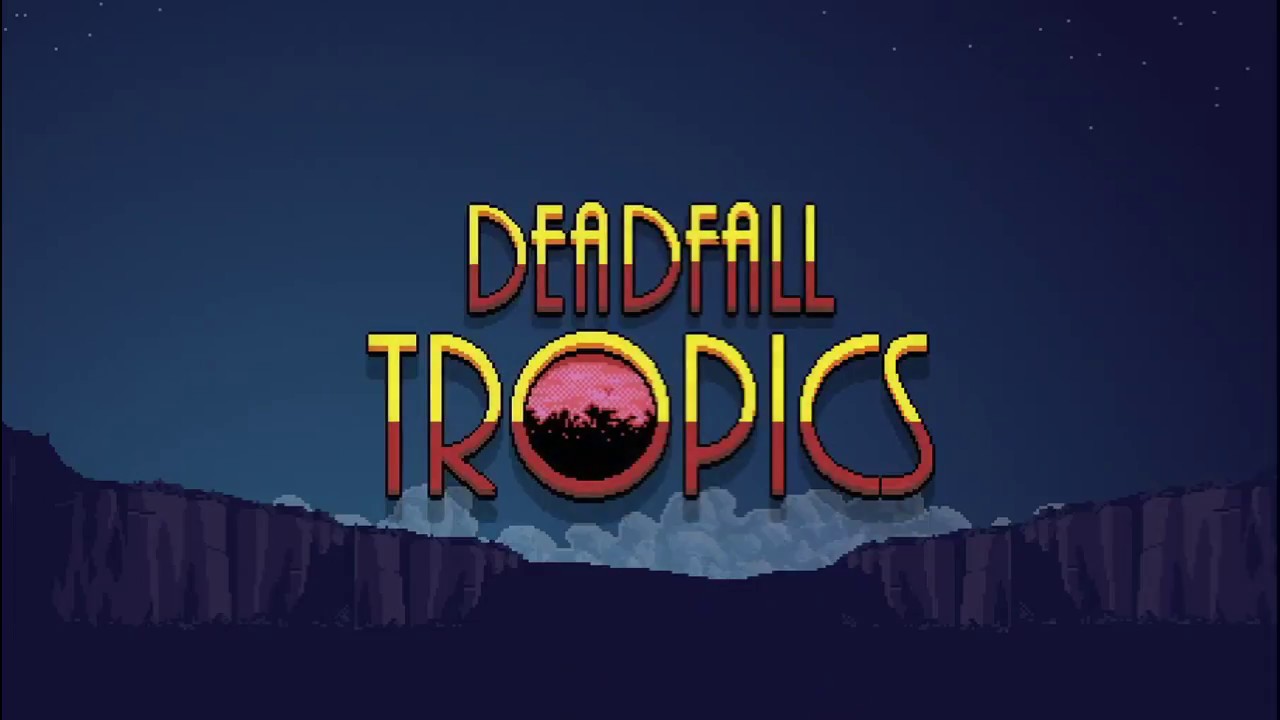 It’s Indiana Jones and the Temple of Masochists.

Evil Nazis are trying to steal yet another esoteric artifact, and this will trigger our little adventure with not-Harrison Ford with a navy hat. Our adventurer is equipped with a rifle as he aims to leave a tropical island, and why not retrieve an artifact while saving a damsel in distress from being flirted with by the bad guy. There will be pitfalls with spikes, there will be snakes and spiders, and there will be swinging off ropes.

Deadfall Tropics tells its story through short cut-scenes in between levels. It’s nothing exceptional, but it greatly contributes to the overall atmosphere of the adventure. With the nice backgrounds, the cut-scenes, the animations and the movie score, everything is there to give a very cinematic feel to the adventure. The pixel art on display is very pretty. It helps with the cinematic feel; the graphics and animations help reinforce the immersion quite a lot.

I had nostalgia goosebumps sending me back to Flashback and Another World, other cinematic trial and error games. Although, in reality, Deadfall Tropics does not venture that far into interactive movie territory. It’s more like old-school platformers, a mix between Contra and Rick Dangerous or Pitfall. 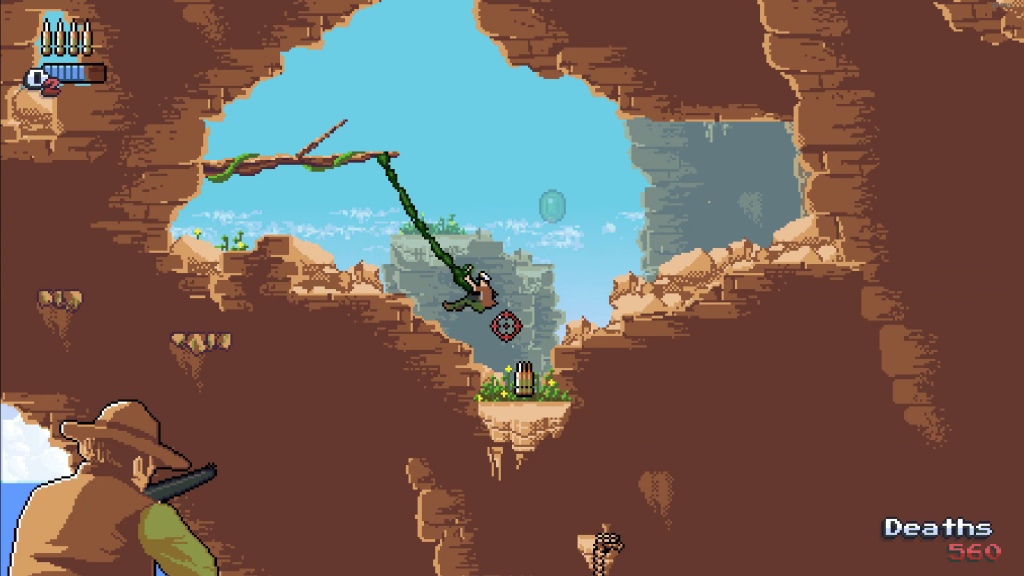 What you should expect in Deadfall Tropics is an inhuman difficulty. In this game, you will die. A lot. I was even raging sometimes, once I managed to progress through a nightmarish area filled with hidden traps, just to get sucker punched by a small puny trap right before the finish line. 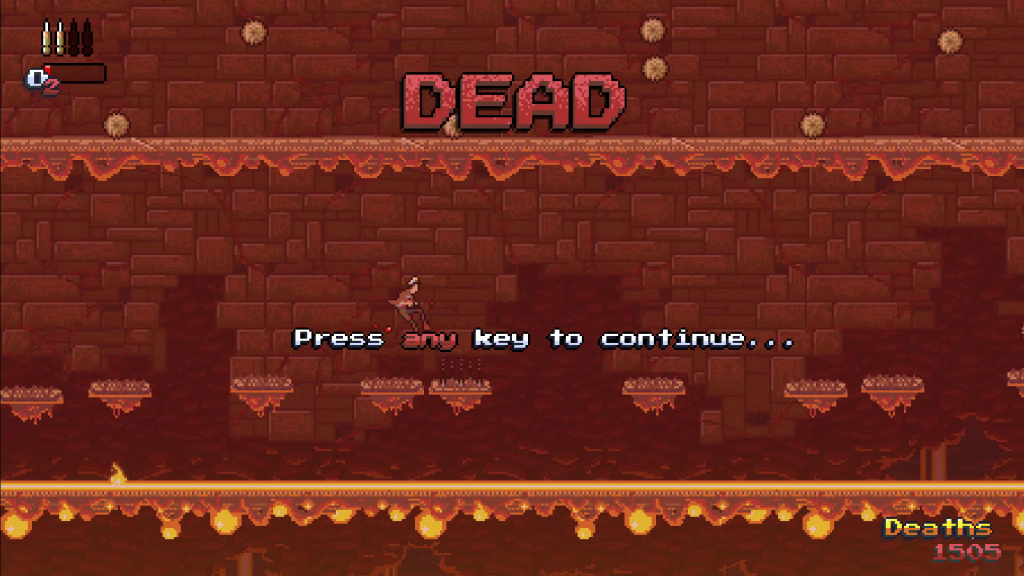 The game does not allow the player to progress by dumb luck, it is necessary to master a sequence to succeed. It implies trial and error, repeating a sequence over and over until you have learned it by heart and your muscle memory can perform the right dosage for each movement. Some areas can require half an hour to master. However, once you manage to do it, you can succeed in doing the same sequence within a few seconds. After a lot of practice, any tricky part becomes second nature. 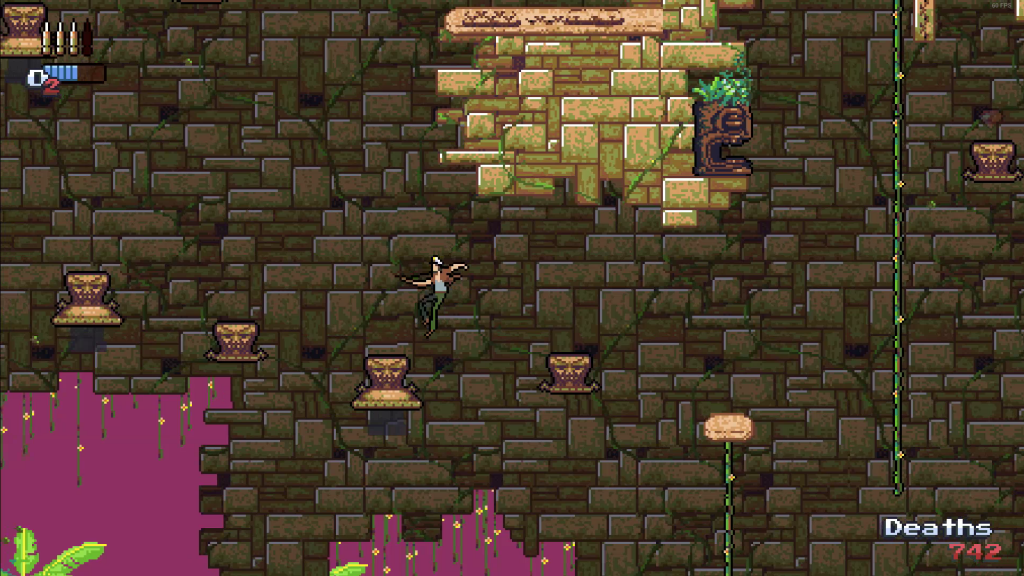 Despite the extreme difficulty, I always enjoyed enduring what the game threw at me. Why, do you ask? I will explain with two main points.

First, contrary to many similar games, Deadfall Tropics has very smooth controls. The game even runs at 60 frames per second, and the controls react instantly. If you jump, the character jumps right away. There is a sprint bar that you can use mid-flight to jump farther, which becomes a very important gameplay mechanic to clear the infernal last levels.

On top of jumping, it’s possible to punch or use a rifle if you have found bullets for it. At the start of the adventure, every bullet counts and the first level is insane, but further down the line, the game becomes more generous. Just like in Contra, it’s possible to shoot in diagonals, but beware, enemies can too. 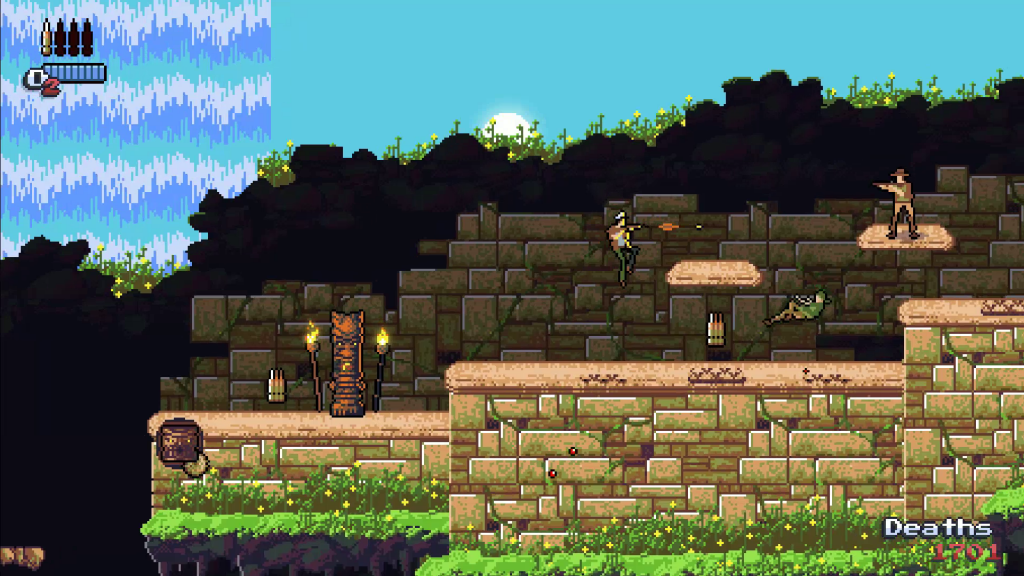 The only issue with the controls is that keys cannot be rebound due to the Fusion engine not allowing it. Thus, if you play with the keyboard, you are condemned to arrow keys and the D-Pad on a gamepad. At least the base controls work well even though they cannot be changed. Although, grabbing ledges on the rope bridge can still prove tricky to achieve. 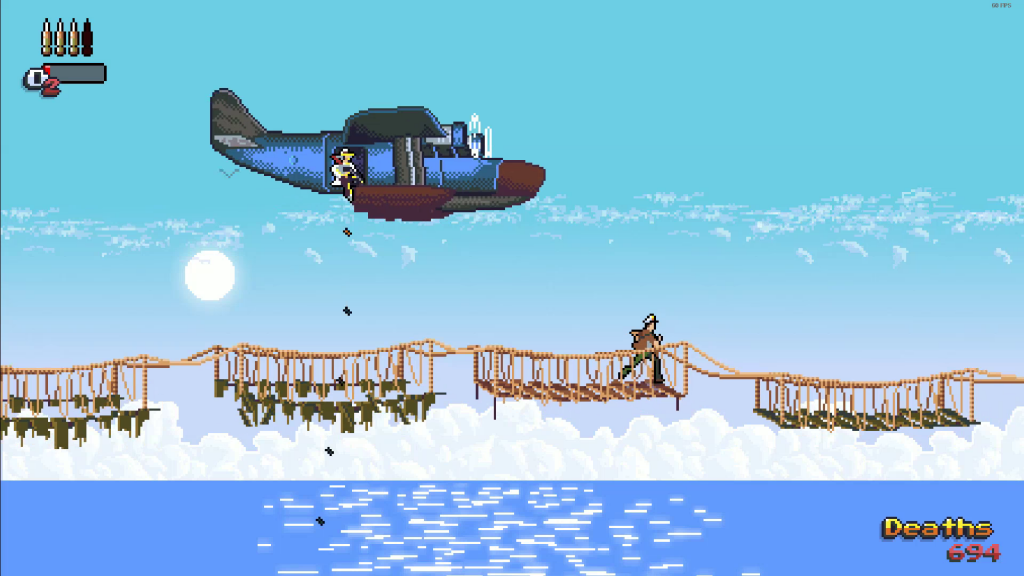 I was talking about the pleasure to endure the game despite its difficulty, and my second point also something that many competitor games struggle with. More precisely, how the checkpoints are spaced in the levels.

Save points are not close enough to let players get through with sheer luck, while they are not so far away that the game is impossible or depressing. It’s a fine balancing tune that was done just right so that I was always struggling while never giving up due to the feeling that the challenge is impossible. The sequence to learn is never too long to perform. On top of that, respawning is immediate. Only the last levels start to deal with very long sequences, but it remains within the boundaries of what’s acceptable. And imagine the exhilaration when you finally succeed, while feeling that you did deserve it. 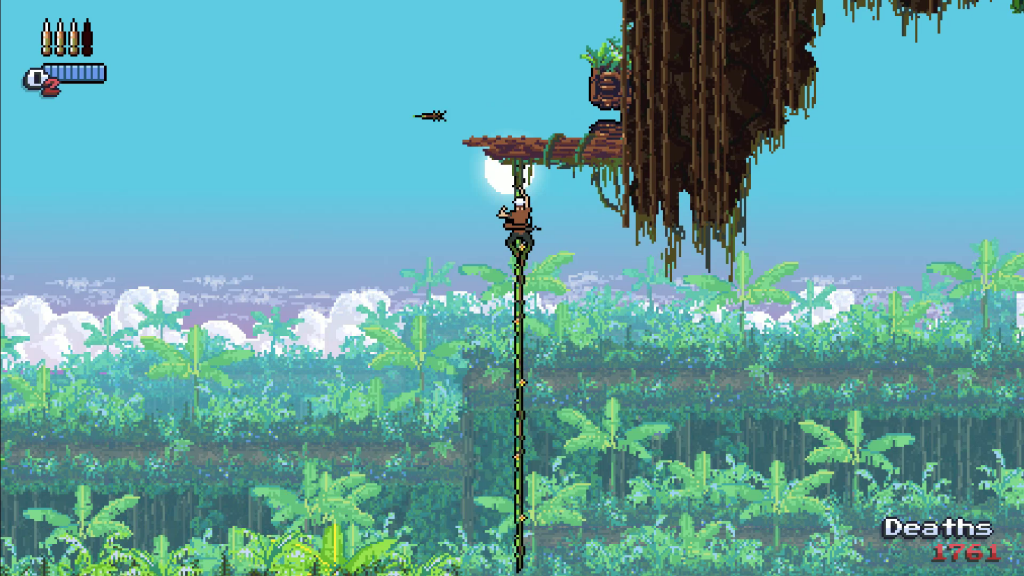 The game is never playing nasty tricks. When secrets are found, it’s validated without having to survive until the next checkpoint. It might seem like a detail, but the accumulation of these quality of life details show that the developer planned for the game to be brutal, but never unfair or using artificial measures to increase difficulty.

It’s difficult but it’s well done, and you won’t find yourself pestering against clunky controls or bad level design.

A big positive is that there is a lot of variety in the pacing and challenges that are faced. Sometimes you will find yourself climbing, sometimes fighting, sometimes swimming underwater… it was an atrocious underwater sequence. At least, there is no time limit or a limited number of lives like in Ninja Turtles! 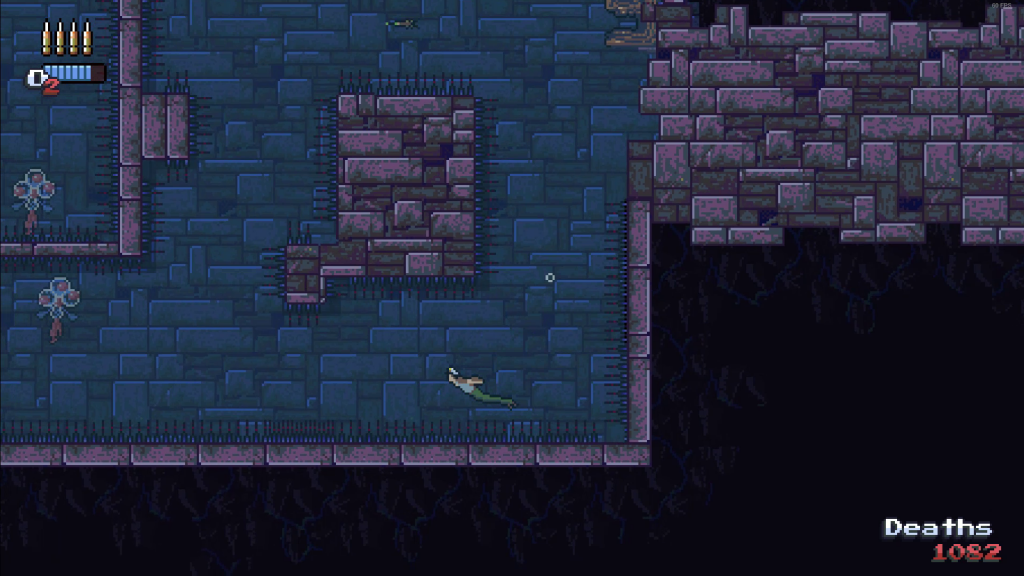 I suffered for about 8 hours to finish the adventure. I have rarely played platformers this hard. If you have a low tolerance for frustration, this is absolutely not the game for you. However, if you want to prove that you have an iron will, this game is for you. And, of course, if you like traps and suffering. There is an achievement for finishing the game without dying, cheers to the sick people who will succeed. Actually, I find that the game lacks more achievement to reward progress without necessarily managing the 100%. That nearly impossible achievement alone is not enough. 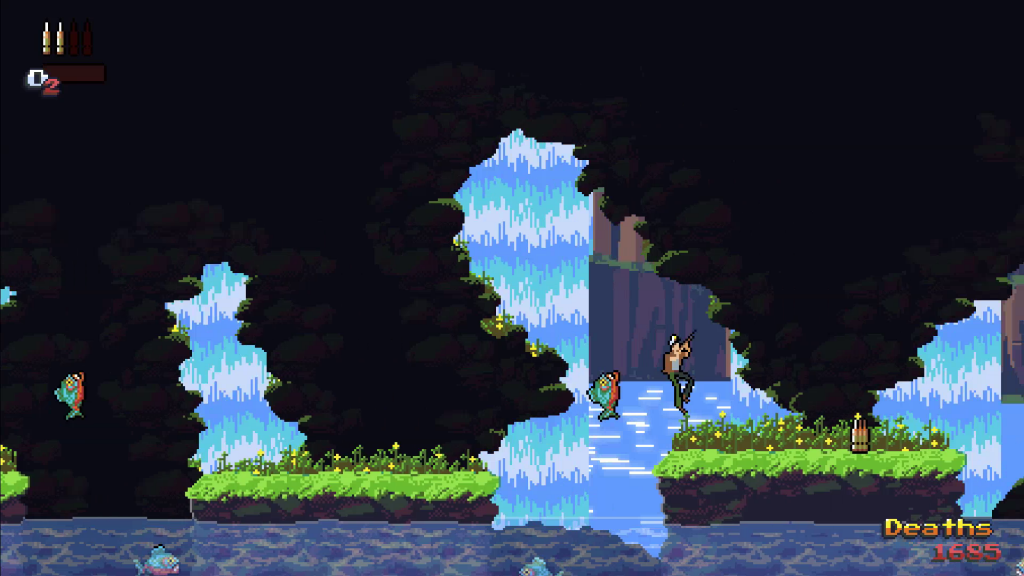 This is an extremely difficult game that should only fall into the hands of masochists, but if you like that particular genre then it’s one of the best. Actually, Deadfall Tropics is my new reference in hardcore platformers inspired by Indiana Jones. The adventure is neat, the controls are great, the pacing is perfect, level design is well mastered and shows variety, graphics are pretty, and despite the difficulty, the game can be finished with the right amount of tenacity. I hope that you are stocking up on controllers, just in case a few of them meet their untimely demise against a wall in your room.