X-Morph: Defense is a hero defense game with destructible environments and enjoyable action. Clever level design captures the basic principle of TD-games as you build lengthy and complex mazes

Tower Defense games rarely require a lot of tactical planning and fine tuning. Most games feature a fixed path the player cannot even alter. Usually, the tower placement is allowed only at the sides of that fixed road, and occasionally there’s a tower that makes the route take about a second or two longer than it needs to.

To me the biggest charm of TD-games have always been the mazes that I could build pretty freely, really giving me the chance to test out many different types of tactics and combinations of towers to create the maximum damage against the enemy. However, these games seem to few and far between.  X-morph: Defense, to my delight, is one of these hard to find games that gives the player a chance to really get creative and try several different tactics in combat. I even surprised myself a few times in the middle of building mazes, noticing just how many twists and turns I’ve actually done and the possibilities that I missed on the earlier runs. There really aren’t many games that have done that.

The plot involves setting up different cores at particular locations around Earth to maximize the planet’s energy output for the aliens and eventually terraforming the whole planet. By itself, this plot won’t offer anything too deep for the player and there is not much background information given about the aliens, but the dialogue offers a few fun remarks here and there. The alien commander, for example, made me chuckle by noting how the humans themselves destroyed more of their own city  defending it than the aliens did while attacking it.

Personally, I’m fine with this light take on the plot but it crossed my mind that a sequel to this game centering in on the aliens would be really amusing (and of course, have more maps of this quality). I was too busy shooting stuff and planning mazes to miss a deeper plot!

The maze-building is an aspect of this game that really shines. Most levels have environmental objects that can be destroyed to alter the path of the enemies without the need for towers, as seen briefly in the review video. This is especially noticed on the hard difficulty, where resources are scarce and every tower counts. On normal I seemed to have a 2-3 extra towers on every level to “waste”, but it still remained a challenge, mainly because I didn’t use the environment as much as I should have. Before I got the hang of it, I was used to reloading checkpoints and going back to planning just to notice that there was a rock formation, a bridge to destroy, or a building to collapse that gave me a chance to make the enemy path considerably longer.

This was a really positive surprise. I’ve tested out many Tower Defense games and the vast majority of them have missed this feature which really gives the player a chance to apply multiple different tactics per level and use their imagination. It also contributes to the replayability.

Collapsing buildings also takes some planning using a controlled demolition. There were moments when I put my bomb too close and it took away a good chunk of the building.  So much in fact, that when it fell it didn’t block the whole path. There also were times when buildings fell a bit sideways blocking another important path. I played around and tested the physics for a while, and I didn’t see anything illogical about them. Even buildings collapsing on other buildings sometimes creates a chain reaction, as do the biggest enemy ships crashing on buildings when they’re shot down. I actually had one tower destroyed like this. My anti-air tower was on the top of a building, an enemy ship crashed down and bashed off half of the building plus my anti-air tower.

The towers themselves are unfortunately simple and plain, a disappointment as I was hoping for a bit more variation on that part. The game features a  basic tower that shoots everything, but it is weak. As for other types, there is the constant fire damage DOT tower, the laser tower that acts as a slow heavy hitter, artillery that shoots far,  and three types of anti-air towers. Usually, TD games also offer passive bonuses for towers like more resources from enemies that are killed near them or slowing enemies down. Those are missing from here, as the tower’s are only used for attacking.

Our ship, acting as a hero of the game, does come with a nice skill set with four different weapons, even though I found a proper use for only two of them, the AOE bombs and the heavy hitting laser beam. They have two attacks modes, a normal and special one that has a cool-down. I rarely found myself using the air-only missiles or the fast shooting plasma rifle.

Additional technologies are available from the core itself that gives some bonuses, like an automated bot around the hero shooting at enemies, longer laser fences in between towers that are used to build the mazes and block the path of the enemies, and other useful bonuses.
Even though this game doesn’t have any status-effect inducing towers, except for the minor DoT-effect on flame towers, I didn’t find myself missing them much. 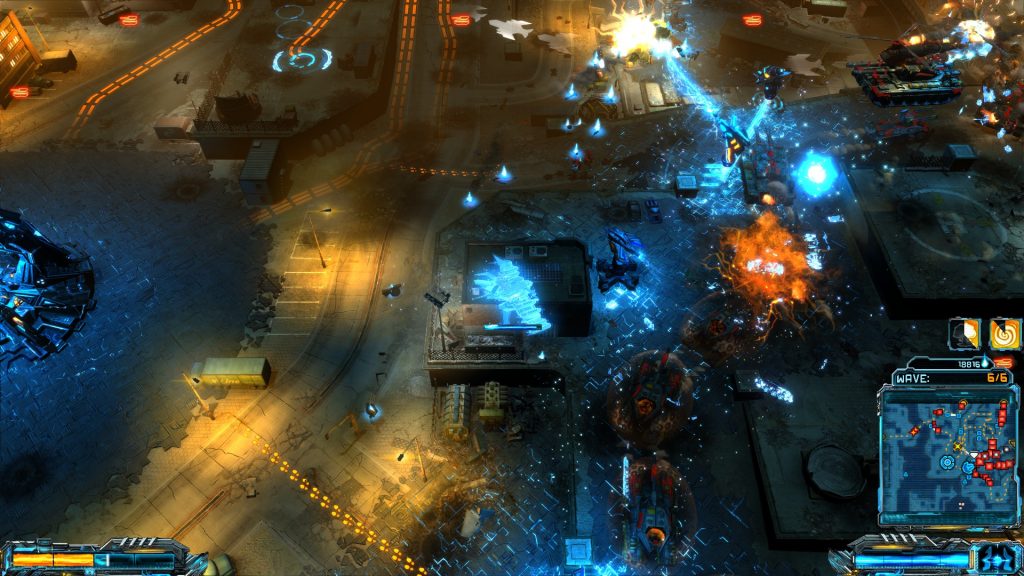 Enemy waves come from multiple places and with different types of enemy units on almost every wave from each point. One path might suddenly bring forth a few long range artillery units that can destroy towers from afar, or several fast moving units after a wave of slow and heavy tanks. The proper tower type needs to be checked after every wave and sometimes even small adjustments to their placement are necessary. When using the ship, the combat isn’t like a bullet-hell game. Most of the enemy attacks are easy to dodge and I found that staying away enough from the enemies lowered their attack rate greatly, but my bombs still hit them without a problem. When playing how it’s meant to, attacking the enemies head on works flawlessly. Switching between the four main weapons is smooth and navigating amidst the enemy fire while dodging and shooting offers some great action-packed moments.

The game surely doesn’t take any risks with experimenting with different towers and enemies. You have heavy and resilient tanks, fast moving light vehicles, infantry with mechs, and normal foot soldiers, some of which can jump over those laser fences.  It stays fun throughout the game, but left a feeling with me that the combat should be much more versatile. Even with the great and enjoyable maze-building, the core of the combat is actually pretty simple. Tanks are countered with laser towers, infantry with the ship’s own bombs and artillery tanks with artillery towers. It’s simple and still fun, but not exactly challenging after realizing the how the combat works and implementing it on each level.

In addition to the main campaign, the game features a survival mode which has randomized skills given to the player after waves. It’s different than the usual survival mode that just throws waves at you generically and is a great addition after finishing the main campaign. Steam users can also contribute with their own maps. There are not many available yet at the time of writing, but I’m interested to see what the community is contributing as time passes.

X-Morph: Defense already has it’s first official dlc! It’s called the European Assault. Despite being short, as it features only three maps, it brings new mechanics to the table and offers a good challenge. It really caught me off guard, actually. I started it, thinking that mastering the base game gave me a good foundation to tackle this quickly. There are no new enemy units but the earth’s army has a cannon that can freeze the towers for a short while or force the ship into build mode (tower building and attacking with the ship require changing into a different mode) which prevents attacking. These bring bit more of that versatility to the combat that I missed from the base game. I also found the dlc to be noticeably harder even on normal than the base game.

The waves are more challenging, coming from multiple directions at the same time, requiring more planning on tower placement and using more of the ships special weapons to kill enemies quicker before they overwhelm you. I also had to plan the path for the to enemies take a bit more. These three maps are more complex in every way than most of the maps in the base game.

As far as Tower Defense goes, this game is a must-have for every TD fan(atic)’s collection. It gives great freedom to the player to design the mazes, offering a few different tactics per level to route the enemy and that aspect contributes a lot to the replayability. I enjoyed my time testing out new tactics on the every level. Although it fell a bit short on different tower types and simplistic combat for the base game, it still stays fun, fast-paced, and action-packed. The new DLC is made with quality as it adds a couple of twists to the gameplay in the form of new enemy weapons and three  challenging maps.  The game also gives players the chance to make their own levels to share with the Steam community.

This game is almost the perfect example of a good Tower Defense game.  All it needs is a bit more versatility with it’s towers and enemies to gain that missing ingredient to make it perfect. It’s the only downside in this game and it isn’t even a big one by any means. This is a gem, a must have in your library for every game collector, especially for the fans of the TD genre.