North is a new walking sim on the PS4, previously released on Steam.  It’s very odd and not particularly long, but it does stick to exactly what the store description says it does.

To be a refugee

North is a game developed by Outlands and published by Sometimes You.  It is one of the oddest titles I’ve seen in awhile and follows the story of a refugee from the “South” who has moved to the “North” to find a new life.  The customs and way of doing things are different than what he is used to and he sends letters to his sister often. 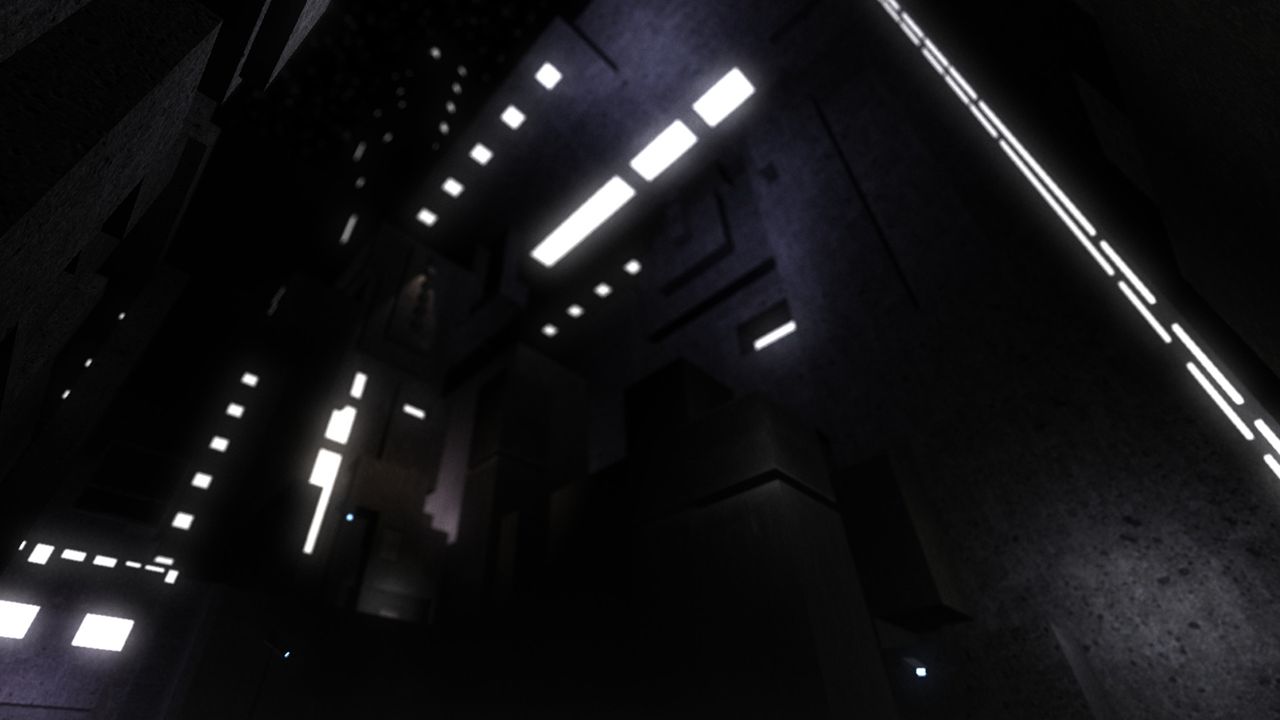 The story is almost entirely told through written letters you send to your sister with a portion of the gameplay itself shedding a very dim light on what is going on. While the letters describe what the main character is going through, living in a new city with different ways of doing things after moving from the intolerable heat of the South, very little of it seems to pertain to the gameplay. If it does, then it’s abstract enough to leave me confused as to how it relates to the letters beyond briefly talking about actual locations.

For example, you have to work in the “mines”.  Yet, these “mines” are littered with crosses that look like a haphazard graveyard.  There is also some sort of alien boss in a hot tub and instead of going down a tunnel to a mine, you walk though a door.  Perhaps the crosses are to convey that many miners die here. That’s my best guess anyway. Then you get to the machines that spit out rocks and have to figure out how to solve a puzzle using them and no instructions.  The puzzle itself is quite simple with different locations in the “mines” involved, but you are forced to learn by trial and error how to solve it. This motif happens repeatedly with these environmental puzzles that are meant to be played until you figure them out by failing over and over.  Not my favorite kind, but often used in walking simulator types of games.

Many of the puzzles are non-intuitive and make little to no sense, such as picking items with certain types of pictures on them in a test.  There is no indicator of what type of picture you need, or any instruction of what the test wants you to demonstrate. It’s doable, but the game purposely makes you play extra long with trial and error choices repeatedly.  You have to be a certain type of gamer to enjoy this. 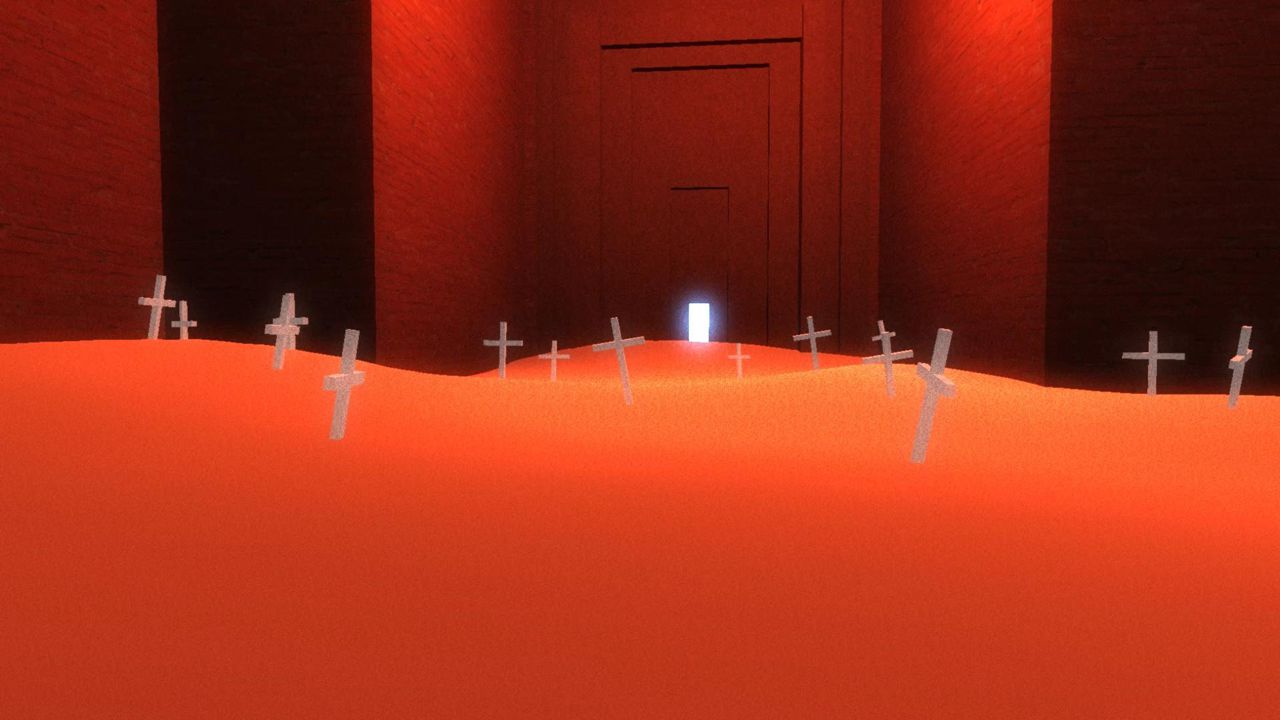 The graphics don’t look particularly thrilling, but it certainly is abstract.  Whether this is artistic or not, I’ve honestly no idea. From my perspective, it doesn’t feel as much artfully done as it does intentionally made to look weird. There are creepy doctor images and a strange church that just do not jive with what is going on. I understand it’s meant to represent strange customs and social norms, but mostly it comes off as a bit of a funhouse walking simulator with minor puzzles.

The command prompts feel very low tech with just bare command images and the overall look is dated.  I can’t say it’s beautiful, but the graphics just barely get the job done.

The background sound is a monotone synth style that varies a bit depending on the section of the game you are in.  It’s mildly unnerving, but nothing terrible. There are very few sound effects, mostly an electronic type, and when they come into play, it’s to signal something has changed in the environment.

There is no menu and you are stuck waiting for it to restart when you play.  I get the feeling this game is meant to be played in one sitting, not to be picked up where you left off the day before 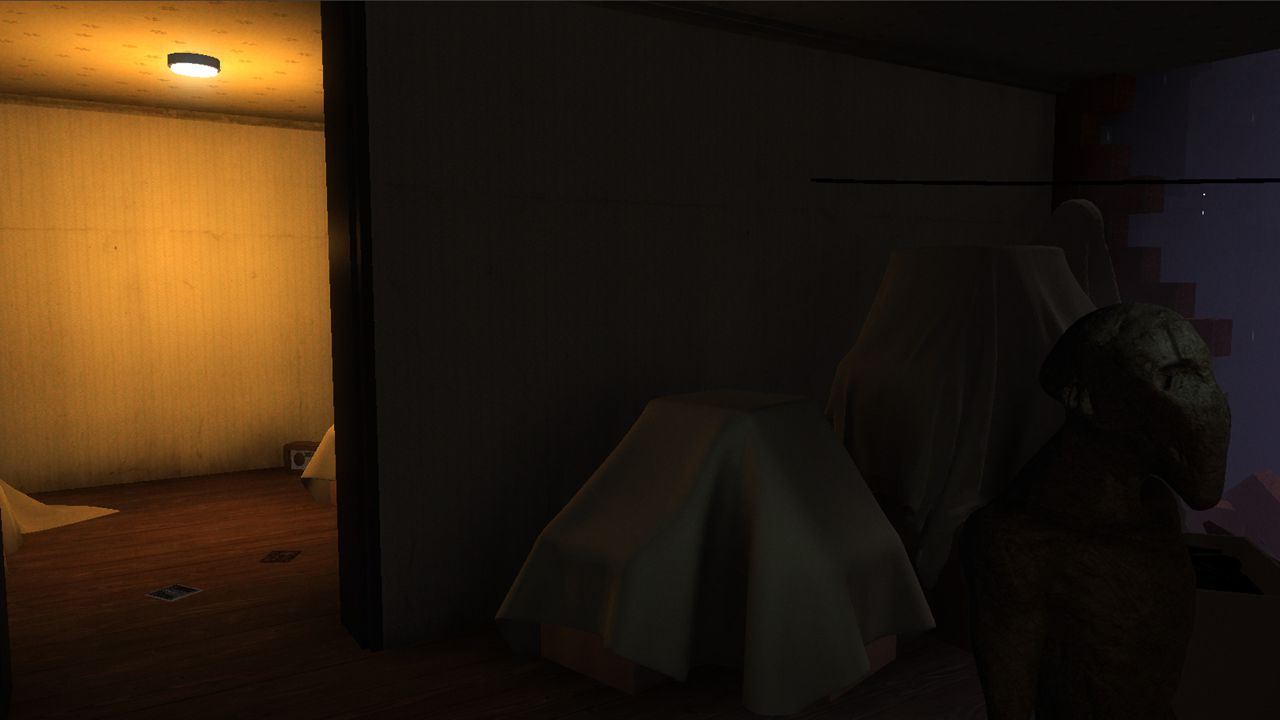 It’s a little hard to say something about North since it is so brief, you game-time should be in the 1-2 hour mark.  The world does not look anything like Blade Runner as was stated online in the description, but it does have a somewhat interesting story about being a refugee.  It’s not good, but it’s exactly what the Playstation store described: a walking simulator with minor puzzles and a backdrop of someone trying to gain asylum.  The puzzles are the trial and error type and you will fail until you figure out the correct sequence to solve it. The graphics are mid-low quality, but are plenty weird. At $2.99, is it worth it?  I guess it is okay for a bargain priced game, but only if you enjoy walking simulators and awkward puzzles without much going on. I can’t recommend it, but for those looking for a cheap game with a few hours to kill it might do the trick.  Achievement hunters will have an easy time with this. I have to rate this as a Pause because for a walking simulator it pretty much does what you’d expect and doesn’t stray from that. It’s doesn’t try to be anything but what it describes, yet is not a game I’d say is worth the time involved.  The best part of the game was reading the letters.