“Your mother looks like a bucket of vomit and changes into a hamster”, and with that, I nailed a decent jab at Mr. J Shufflebottom. Welcome, to Oh…Sir!! The Insult Simulator!

I wish to complain about this parrot I purchased…

Step right up, folks! Here, we essentially have a fighting game without any physical punches. Instead, you must use your wit to cobble together insults at your opponent. It’s an odd concept, and certainly original. In place of special button combos, you have insult combos and you can even get extra points by taking advantage of your opponent’s weaknesses during the gameplay just like any fighting game. On the face of it, I found really a well-polished game here. It’s got all the regular fighter style bonuses and moves without using fists. There is even cross-platform play, so whether you are on PS4 or PC you can insult another player to your heart’s content. The only issue was that the game generally reused the same sentence bits too often and because of that, the gameplay soon began to feel repetitious within a short time. 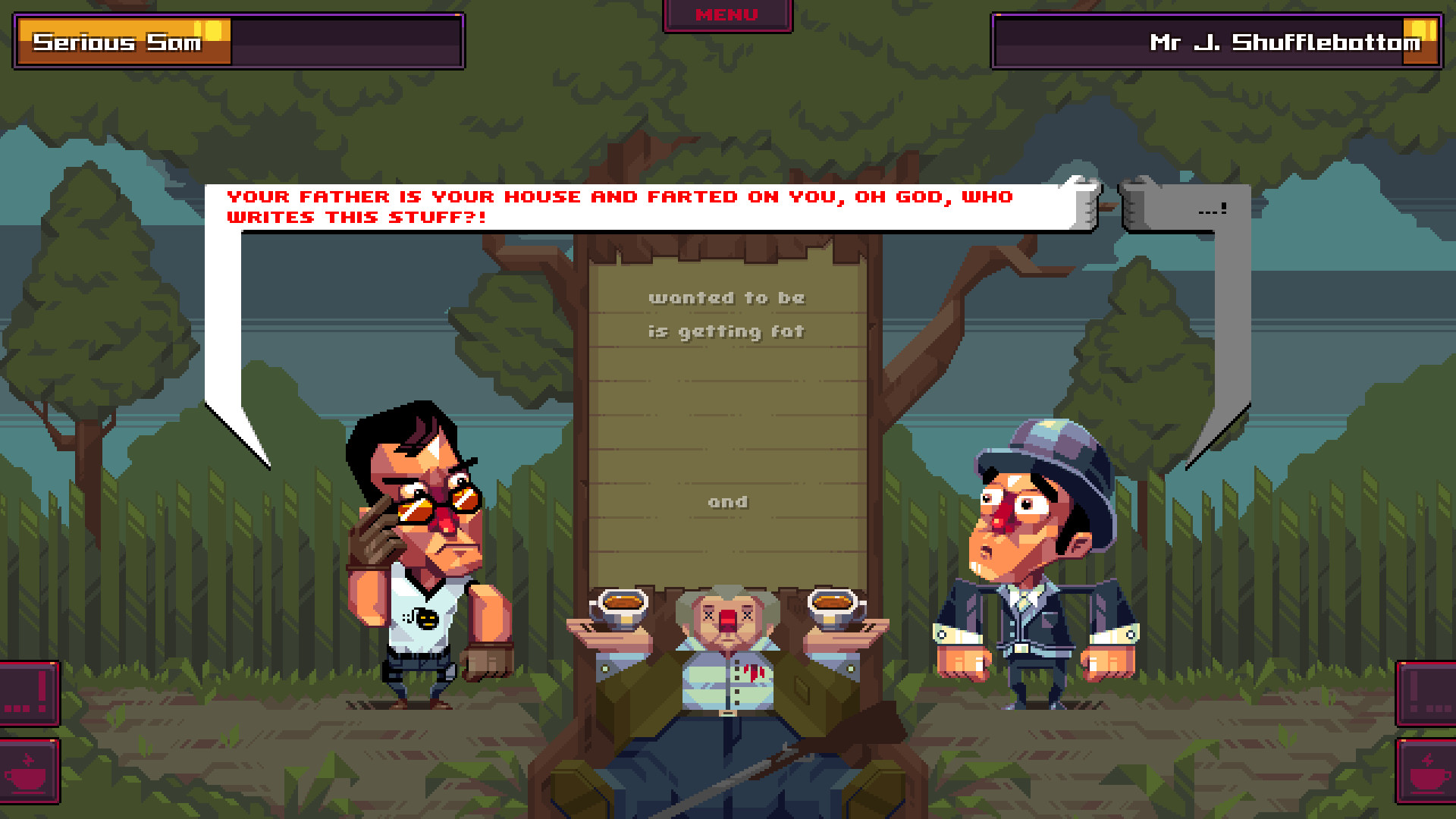 There is an intro tutorial on how to play along with some advanced techniques that give you a grasp of how to attack with insults efficiently. It is rather straightforward and explains the methods quite clearly. From there, you have a choice to insult a CPU or insult a human. I began against the CPU and chose an instant match to get the hang of it.

You start out by picking a protagonist from a partially locked selection of characters and then a conflict scenario that features what I believe are scenes straight out of the Monty Python playbook. It’s been so long since I’ve watched a great deal of Monty Python that I cannot recall the dialogue exactly except for the Parrot sketch. In any case, the game references Monty Python repeatedly throughout, which may or may not appeal to someone’s sense of humor. There are a series of sentence fragments listed in the center of the “arena” and you have a time limit of 15 seconds to select one to begin your insult. The opponent then selects theirs, and this ensues until someone finishes the sentence and ends it with an exclamation mark. At that point, the other player must hurry and finish their insult. The defending British insultifier-person then hurls hot curried insults as fast as can be, followed by the insult from the person who actually finished their sentence first. Hit points are tallied and then deducted from a health bar up at the top as you land your insult punches.

That is pretty much the game in a nutshell. Now, if you find out the opponent’s weakness, for example, Mr. J Shufflebottom might be sensitive about the way he looks, then you can aim your insults at addressing what he wears and get some bonus points. Additionally, you can create insults in a giant run-on sentence, assuming all the words in 1-2 turns allow you to, and get a combo bonus. There is also a Rude combo you can get for being extra vile, but I wasn’t quite sure of how those insults qualified exactly. The Combo insults were the most fun, but a bit dangerous because you have to concede the turn with a “…” , which is basically the character pausing with a loss for words, and the continue on the next set of words in the next turn. However, you may not have enough power in the insult to compensate for the loss of the whole turn, so do that at your own risk. 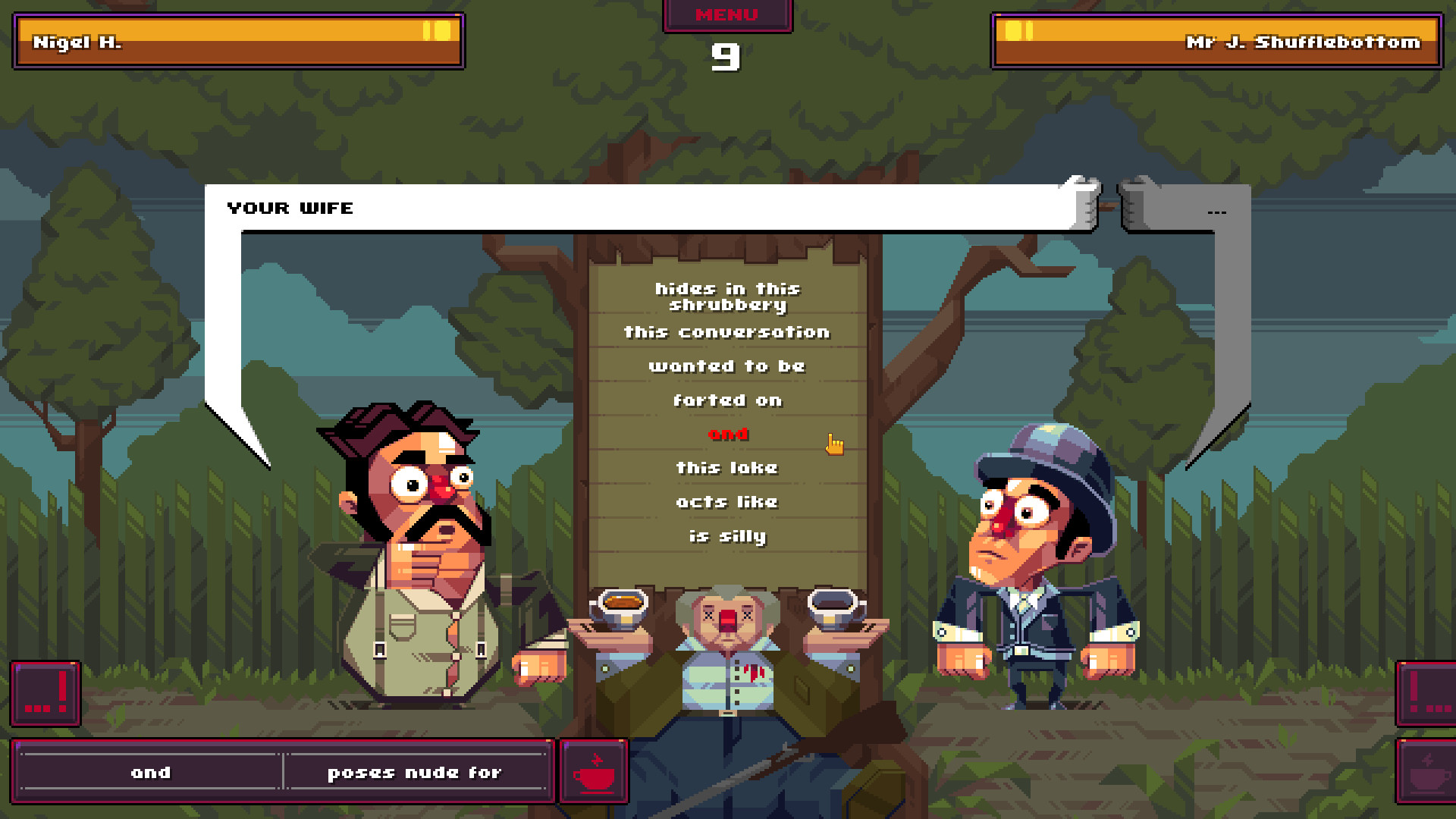 There were a few times where I tied the game and had to do an Impasse round, and that was fun as I did that combo insult and beat the round in one wickedly long insult that barely fit in the word bubble.

To unlock characters, I had to complete five round tournaments. The first four are not bad, but the last one is against God, voiced by someone pretending to be Morgan Freeman, and he has two health bars. Granted, his insults tended to be weak, but that was as close as I got to a boss in the game. I did like the butt-trumpeting horns in the sky, something I definitely recall from Monty Python.

So, this very much played like any fighter game I’ve played, except with words. Now, I love making up my own insults, but here it is a bit more of hodge-podging of whatever words you can select from while the other player undermines your insults. Some come off well, especially with Combos + Rude perks in the mix, I had one insult worth over 40 hit points. Other times you end up seeing some rather silly insults that do very little damage like “Your mother is your hovercraft”. As long as I aimed right at the weak part of a character, I generally won. I do wish the words would be more random as many of the insults generally look all the same after a few five round tournaments.

You can unlock new characters, such as Lo Wang, and get some more cheesy insults that sound like something out of Shadow Warrior, but it was still gameplay along the lines of a chuckle or two. The repetition just killed it for me once I got to the two hour mark. With online matches, I can see this being more much strategic, but if you are not multi-player inclined you won’t get all that much out of this game after some time. Against other players, you’d be gambling on what words are being taken and trying to out power an insult on the fly, which is likely the better way to play in my opinion. 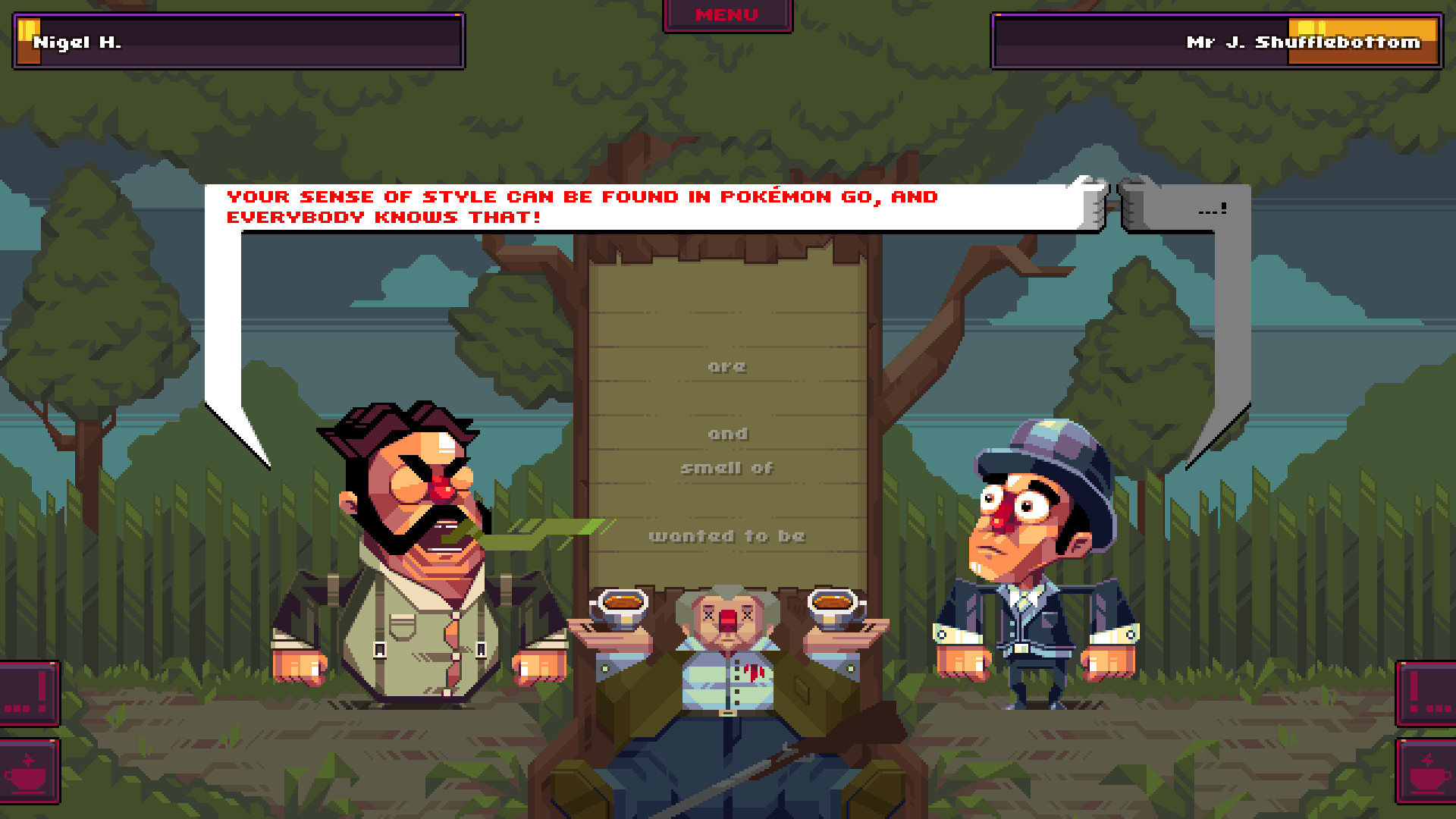 The pixelated muscularly armed characters are rendered beautifully and make the game all that more charming. The scenes were adequate, but the characters were much more interesting as they would animate with a bit of rage when you got a really good insult going. All the insults are voiced, which I feel is absolutely necessary. It is much more amusing to hear someone talking in a Monty Python-esque lady’s voice or what I could have sworn was a Sean Connery imitation on Sir Knight. The Russian immigrant’s voice and Lo Wang’s voices were not as interesting, but I generally liked the British ones quite a bit. The sound effects also reminded me of something out of a Terry Gilliam cartoon. Well done. 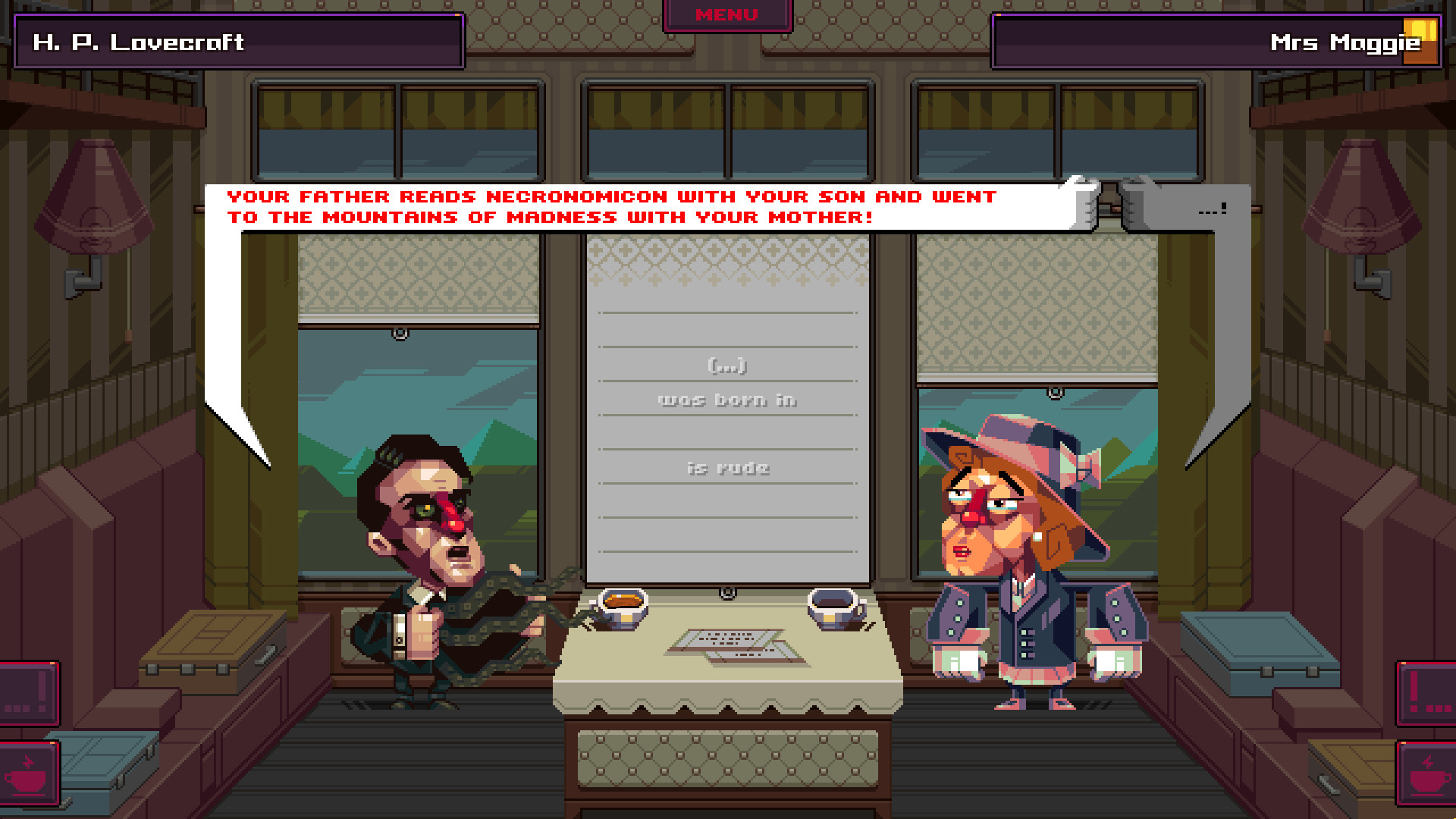 It’s a fun game, but I think it’s better to have someone play with you rather than single player. The words get recycled too frequently and that is where the appeal begins to wear off as you put in the hours to unlock more characters. It’s a nice party game and best with a buddy. It did exactly as the title suggests, it simulates insulting people, and it does it with a decent amount of fun and cheek-in-tongue antics. It’s something I’d probably rate as a teen+ title, as I don’t think I want my 8-year-old telling kids at school that “Your mother tells dirty jokes at funerals and poses nude for your math teacher, you cross-eyed inbred muckspout!”. Just not feeling that vibe of getting called to the school about that. However, there is no outright cursing that I could find.

I just wish there were some more words to choose from, at least within the first few hours. The repetition is the only drawback to this title. I also wish there were some steam workshop mods for more options on sentence building. Often, I’d feel the desire to add more insults than I could muster with the word choices.

Otherwise, it’s a great game to play once in awhile and it is only $2.99 on PS4 or $1.99 on Steam. That price is very reasonable and I think it’s a worthwhile purchase if you think you would enjoy some insult slinging for a bit with friends. With my general interest in the game tapering off after seeing the same phrases over and over, I can’t really give it a solid Save rating, but it’s just shy of it. I’d say it’s a Save for Later rating and if on sale it’s totally worth getting.