Alphabet Backlog – A is for Another World
Add comment
Share:TwitterFacebookRedditPinterestWhatsAppEmail

Alphabet Backlog – A is for Another World

Episode 1: A is for Another World

Hey! I’d like to introduce my brand new series of articles called the Alphabet Backlog, in which I will go over a selection of games from my Steam Library that I have not played yet, or barely played! Here’s how this will work:

In each episode, I’ll choose a letter from A-Z, select a few games starting with that letter, and give each of them a two to four paragraph assessment, followed by my completion rating: COMPLETED IT, WILL COMPLETE, or ABANDONED IT. We’ve got a weird round-up of games today starting with the letter “A”, so let’s begin!

Another World is a classic. A pioneer in its visual technology and a memorable game to many 90s kids of the past. It was a one of a kind adventure to the many people that have played it during its heyday. I’m not one of them because I’m a scrubby millennial who only now has given it a shot thanks to its 20th Anniversary Edition release, and suffice to say, it holds up well in some regards…and not so much in others.

Let’s start by saying that any severe issues I’ve had with this game have got to be thanks to it’s terrible, terrible re-release. The new graphics kind of cramp the original, more pixelated style (You can thankfully swap between the two in a single button press).  Controller support for me seriously just doesn’t want to work, and the menu cursor would just not appear in the pause menu a lot of the time. This is why you don’t let DotEmu handle your ports.

Let’s continue by saying that there’s a very damn good reason why people like this game. It’s style is age-old but still enjoyable today, every single room plays like a unique puzzle that feels great to get past through, and it’s animation (while dated) is visually appealing to look at. Though how it handles screen transitions and puzzles in general feels super dated for me to truly enjoy it, it’s easy to see just how easily sucked in people were over it. It felt like a challenging, daring new world, one full of playground advice to get past the guard, or the brute force of finding every possible solution you can.

Its name is fitting. It is like another world. It’s like seeing something different. Which makes it super hilarious as it’s final message at the end is to literally tell the players to go outside more, but I think back then that kind of message was powerful. If such amazing worlds can exist inside our computer, why can’t some also exist outside our doorstep? I’m not sure if I enjoyed it as much due to how much gaming technology has changed since then, but Another World was an eyeopener to a past I wish I could have seen for myself.

You may be aware of Remedy Entertainment, who seem really obsessed of late with designing games that can be enjoyed like watching a TV Drama, but also play like an actual game (this is a really bad jab towards TellTale). Quantum Break is their most recent (and to some polarizing) attempt at this, but you may or may know of their first crack at this unique take: Alan Wake.

Alan Wake is a 6-part episodic third-person shooter starring the titular character, a writer (with a voice so bored-out that it’s like he doesn’t even care) who’s been struggling through a writer’s block (I’m sure we’ve all been there before). On a vacation with his wife, things start becoming strange as he begins seeing strange shadowy figures around the place. It’s also super hard to explain any of it since a lot of is thrown around to the confusion of both Alan and the player.

That may all be super sweet and stuff, but you may be asking, what does the game play like? Well, it’s a third-person shooter where you flash a light at enemies long enough so they can then be vulnerable to your gunfire. Some additional puzzles, cinematic walking sequences (yeah), and tons of unique collectibles are also thrown into the mix, making it for a satisfyingly addictive game that’s almost like a TV Show. There’s some scavenging to do, a lot of strange enemies to fight, and psychological freak-outs to experience. It’s like their whole plan worked!

I mean, not quite. Two episodes in and it’s clear that the game wasn’t meant to be enjoyed in long sittings, but rather each individual episode. The combat just starts to get super draining after playing so much of it, and I saw myself not wanting to continue any further. But, I didn’t stop. And that’s because Alan Wake had a huge amount of detail and interesting story beats that kept me going. From interesting details such as watching entire 5-minute episodes of a Twilight Zone parody to its successful attempts at psychological horror, Alan Wake proves to be a surprisingly competent adventure given its format and age. I’ll probably get to it later.

Ok don’t, I want to live. But I don’t want to play this game after only a freaking hour of it. Advent is an RPG Maker game that unlike most that get seen and highly praised (*cough cough oneshot cough cough*) uses no original art assets or it’s own scripts (modified ruby/JS/whatever that can change the RPG Maker engine) whatsoever. Its gameplay is no more different than the default engine itself and for the most part, locks you in these painfully long cutscenes of poorly written dialogue.

Oh yeah, I think I would have been able to get by this regardless if the writing didn’t read like a bad original story written by a Christian fifth grader. Basically, there’s this creator thing that’s pretty much god, and also two kingdoms at war with each other. A lot of it is back and forth to the point of it not making much sense, and the writing just seems poorly thought out. As someone who’s made RPG Maker games I’m astonished at the fact that I even tried to write a more coherent narrative for a game I literally made in a weekend.

Look, this really just seems like a fun student project, but the fact it was on Steam (you can see the store page but it isn’t for sale anymore) for $5 is truly embarrassing. You could seriously buy much more interesting and well-thought out games with that kind of money. 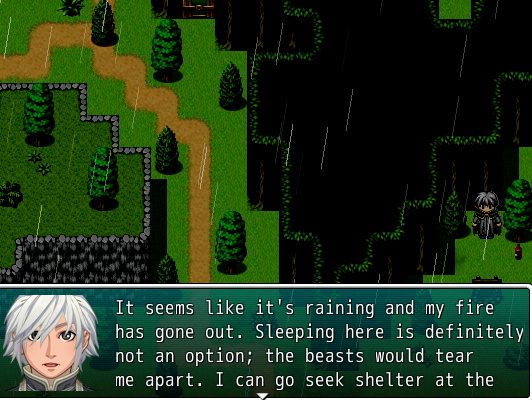 And also there are semi-colons in the dialogue SEMI COLONS

And that’s our first letter! Only 26 more to go…..until then…to be continued!