Have Fun Storming The Castle 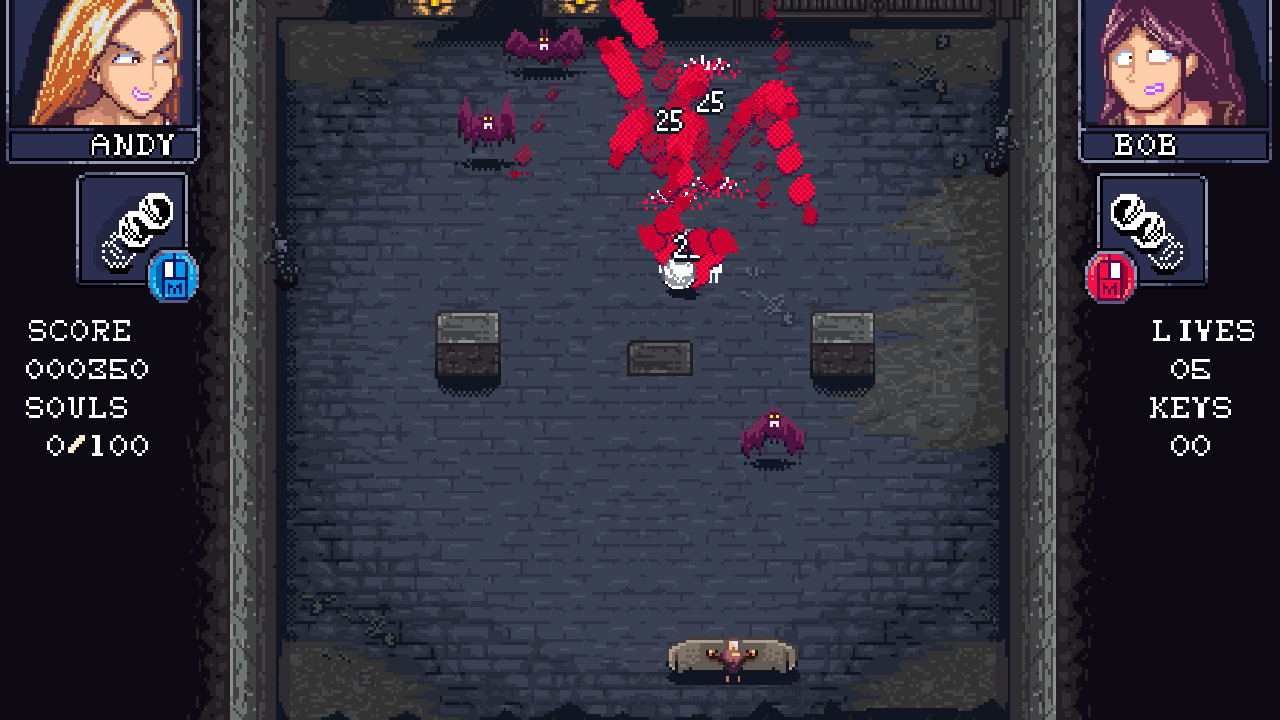 Retro Army Limited returns to the gaming scene following the release of their previous ’90s style fighting game, Verdict Guilty. This time around the studio decided to utilize the Early Access platform to develop Death’s Hangover and finally exited the program with a satisfying Breakout iteration. Fans of Retro Army’s cut-scenes and brand of humor will find them intact while veterans of the genre will discover a unique twist to the formula. I was skeptical when I first played it in early access, but I am happy to report the game is functional with just a few small hiccups. The only issue I have yet to determine is if the price matches what is on offer. That is what I plan to do today.

The intro establishes the ultimate goal for the game, but nothing really gets explained until the final stage of the two possible endings. Death is the driving force behind the assignment of retrieving his souls and is constantly appearing to Andy and Bob to offer words of encouragement without disclosing anything behind the dilemma. Cut-scenes also appear during each stage to show how far along Andy is to discovering the truth behind Death’s request (with Bob acting as more of a comic relief). Little hints are placed throughout each stage as to what is going on, but the only hard evidence gets presented during the stage in the throne room. It is a nonsensical plot with very little payoff, but it adds more to the comedic style of the developer and at least provides closure to the why and how of Death’s apparent hangover. 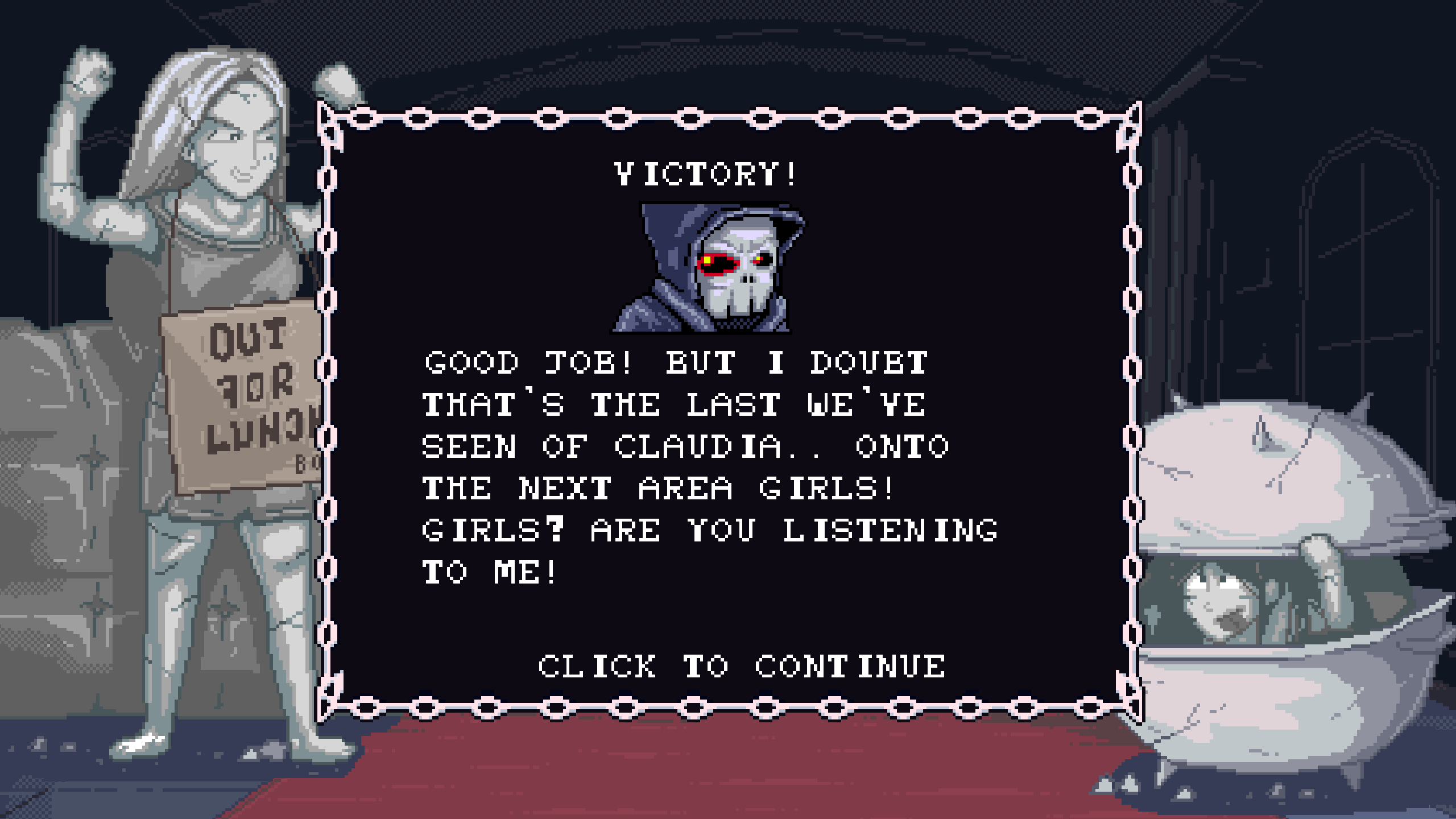 Speaking of comedy, fans of Retro Army’s previous title Super Trench Attack might find some enjoyment in the lowbrow, dark humor. I didn’t find myself laughing at the jokes, but I was pleased with the sarcastic nature of Death’s commentary. On the visual front, everything has a low resolution pixelated style with small sprites for the creeps. The stages are varied with a different box appearance and monster type for each area. Some areas include unique game mechanics such as breakable border blocks and running water to mess with the direction the ball is heading. Music is not too shabby, but it can get repetitive after a while. As a full package, these parts blend together in a competent manner to produce a decent experience that isn’t rough on the eyes.

Dracula’s castle is essentially divided into floors with multiple stages populating each floor. Before the Breakout segments can be accessed, a short, linear 2D adventure mode must be completed. They contain a very simple set of rooms that require certain actions to reach the end, some that include hazards that can eliminate the player and any power ups they were holding. It is not possible to skip these or the cut-scenes that play out during the course of the game, so anyone seeking a pure Breakout experience might be disappointed. Each stage provides six levels during the Breakout portions and includes a creep fight, a soul retrieval segment and a boss fight to top it off. Stages can be dealt with rather quickly and a full play-through can last about an hour depending on how many keys were collected to access more stages. The game requires multiple play-throughs to collect all the souls and certain stages cannot be accessed on certain paths, so there is some replay-ability to the game.

The ball and bat segments will feel at home to anyone who has played the genre before, except this time the focus is on breaching a door located in the room to progress rather than eliminating all the boxes. Some boxes are invincible, others move to prevent passage of the ball and plenty of them break to reward the player with goodies. The breakable boxes hold gems that provide points toward a new life, keys to unlock other areas, souls, and one of seven available power ups to aid in storming the castle. Any power can be upgraded to a second level and provide a useful ability from passing through any objects, grabbing the ball on bounce back and a couple of projectile based powers that help when dealing with the creeps. Two power ups can be held at any given time, one of which is placed on reserve and will always change if another power up is picked up. Should a player lose a life, the active ability is lost, but the one on reserve is still available for immediate use.

Some of the special features of the game do stand out from other titles in this genre. The ball has two passive abilities that slow it down or speed it up. This offers some very useful tactical approaches to dealing with tight corners made by creeps and the ability to stall for a block to move. Once a player dies, there is an option to restart the stage or take a chance at the Cheat Death wheel to restart at the last area played. It is a gamble that either rewards a game over or the spot back at the previous area with one of the seven power ups. It is an interesting concept that makes fighting bosses a little more forgiving. Boss fights have their own distinct looks and incorporate the environment to their advantage. Some share similar abilities such as fireballs or lightning, but they function differently depending on their health. Aside from the three levels of difficulty, there is a 2 player mode and a level editor for basic level designs. Controller support is also present, but it only recognizes the Xbox360 controller.

I was pleased to see that issues involving game crashes were dealt with before the final release, but there are still a couple of issues I noticed during the course of my adventure. When a boss fight finishes, the player must retrieve the ball to avoid a death. On certain occasions, the ball would pass through the mattress if it was too close to the entrance located on the side of the wall. Some souls are trapped behind very narrow wall gaps and the ball can end up getting stuck inside the area with no hope of getting out. Outside of these two issues, the game ran like a dream with very short loading times.

Satisfying game-play, replay-ability, decent visuals and a forgiving difficulty were enough to keep me playing after my first two ventures through that Bastard Dracula’s castle. I would normally reserve this kind of title to a discount ranking, but I can see someone getting their money’s worth at full price. I am glad to see another game properly use the Early Access program for its intended purpose and come out looking better than ever. Retro Army continues to push forward in another genre and I encourage anyone to try out the demo to see if their spin on Breakout is to your liking.