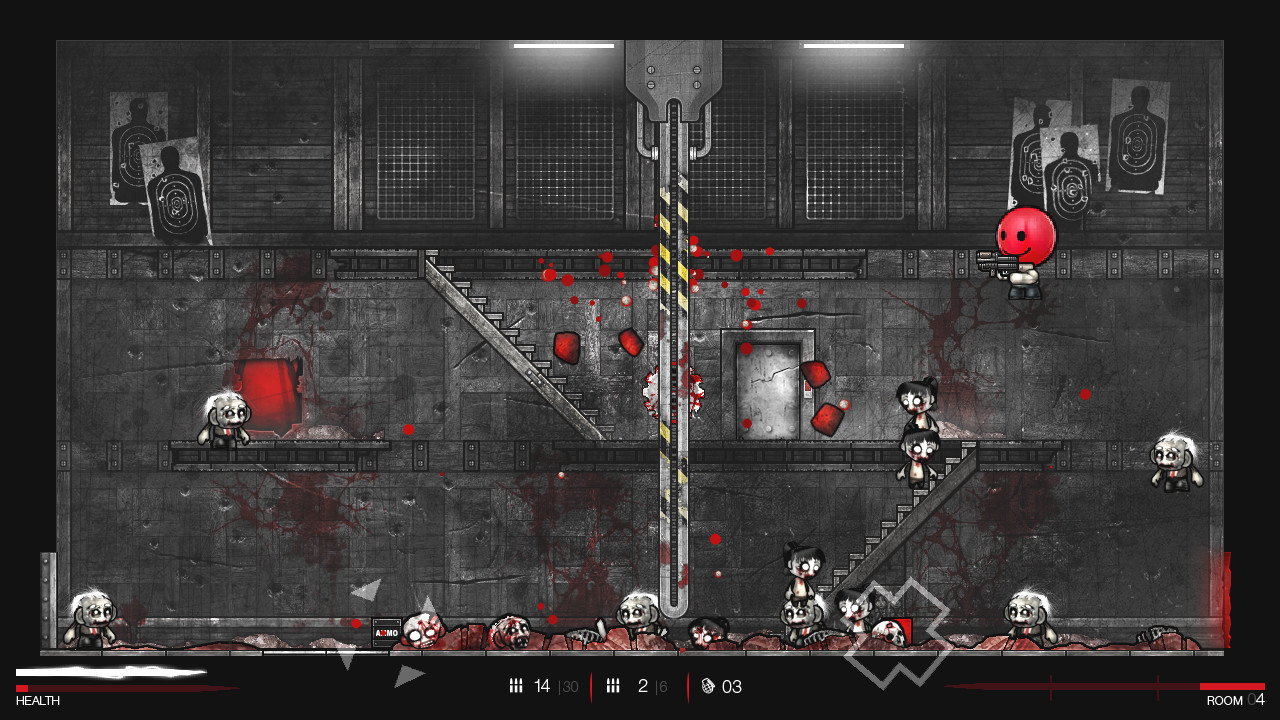 From a one man team comes room13, a brutal and hectic fast-paced action platformer which focuses heavily on weapon and player customization. See how long you’re able to survive the merciless waves of undead while building the ultimate killing machine.

Despite the simple looks and the seemingly boring gameplay at first glance, room13 managed to surprise me. At its core, it is a very simple game: survive the ruthless hordes of undead that are trying to murder you, proceed to another room, repeat. However, in practice it has quite a bit more to it than that. 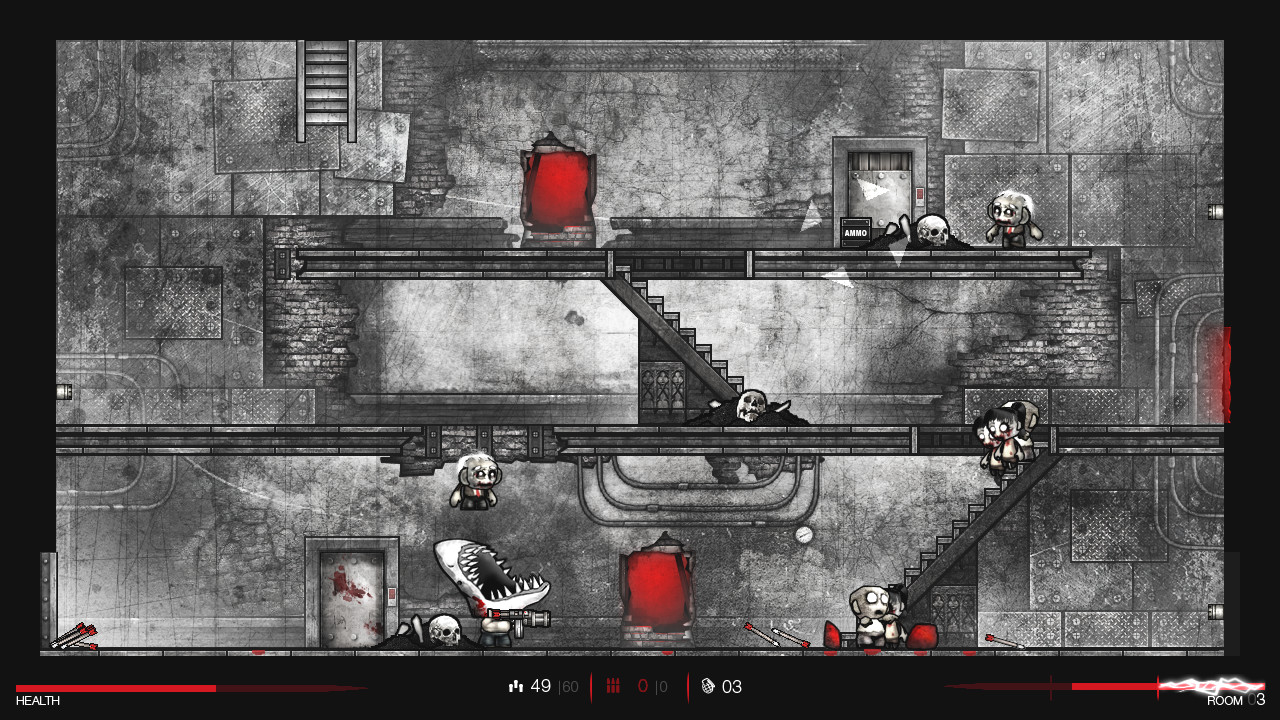 The premise of the game is pretty simple. You go from room to room clearing out waves of enemies. After doing so, you’ll have a certain amount of time to either proceed to another room or remain in the same one. Meanwhile, you can loot crates for different weapon parts which you can use to customize your weapon or pick up random faces, ammo or health. That said, the game offers 32 different faces for you to wear, provided you are able to unlock them all, which can be done by simply killing more enemies and playing the game or by defeating bosses. Each one of these faces has a unique look to it and also comes with a special ability for you to use. The game does offer a story mode and an arcade mode but honestly I can’t really tell the difference between the two and while playing story mode I can’t really tell what is going on. Perhaps I have to reach a certain point or complete the game in order to get any sort of meaning out of all of this… 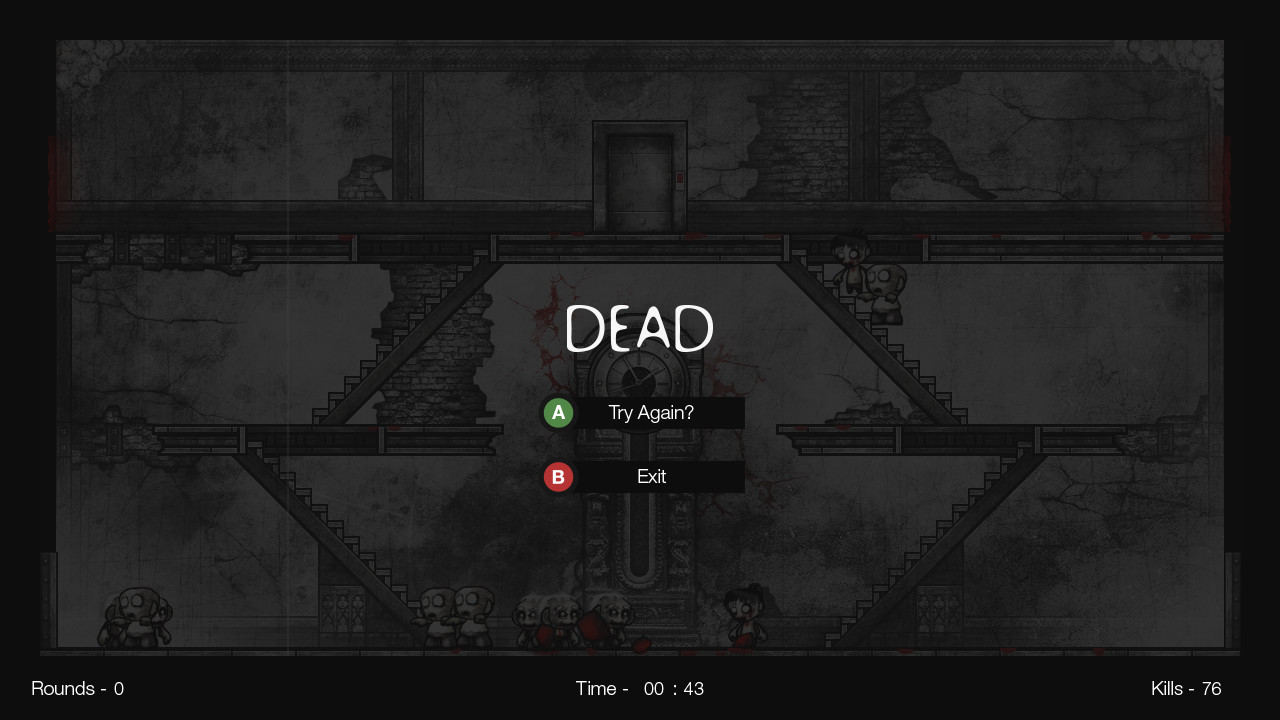 The thing in which the game has a heavy focus is on weapon customization. You start with a basic handgun and from there you’ll be able to upgrade it with different attachments and you can even get a second weapon which you can also upgrade. Upgrades include magazine size, barrels, receivers and stocks, which means you can easily transform your starting gun to a shotgun or a machine gun. Every weapon, besides the starting one, is pretty efficient in dealing with the enemy hordes, so it’s up to you to find which one better suits you. For close combat go for a shotgun, or if you prefer to take enemies from afar by keeping them at bay a machine gun, with a high rate of fire, might be your best bet. You do have limited ammunition, which forces you to make every shot count and carefully plan how you’ll pick up an ammo crate that is lying on the ground without getting yourself killed. There are also melee weapons which can be thrown at the enemies, which are useful in tricky situations. 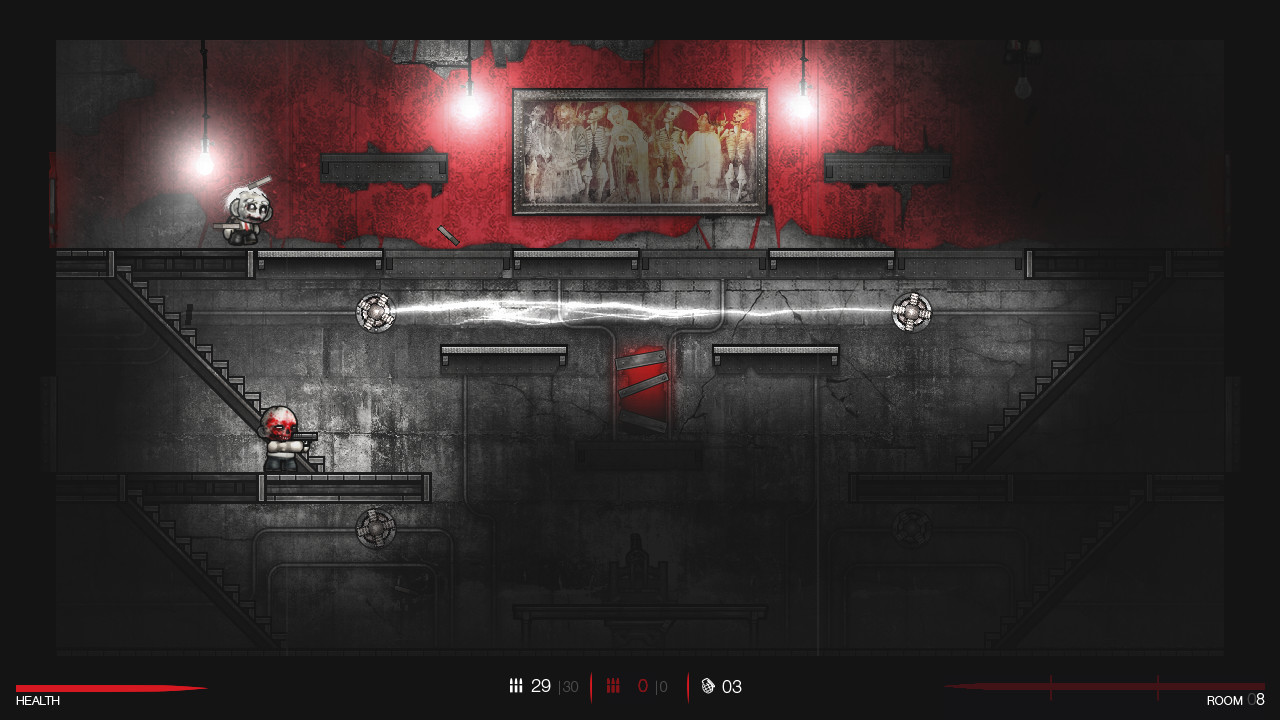 The game manages to keep up the pace the entire time you play because, while you’re also trying to kill the enemies, you’re also trying to fill a progress meter, which is divided into 3 sections, in order to get out of a room. This meter is filled by picking up enemy pieces after you kill them. After filling up one section of the progress meter you’ll need to pick up a battery in order to progress to the next meter section. Once you’ve collected the third battery the enemies stop coming and you get to choose, either leave the room or remain in the current one. One way or another the game gets harder the more rounds you survive. Whenever you clear a room you have a small window of opportunity to move to another one and to loot crates which, as mentioned before, can contain weapon parts, faces or even enemies. In total, the game has 13 different handcrafted rooms for you to explore in any order you see fit as well as 13 different bosses. However, in order to get to the 13th room you’ll need to acquire 3 keys. Even though the rooms don’t change their layout, they have traps which are activated at random and some of the rooms lose power at times, leaving certain parts of the level in relative darkness. 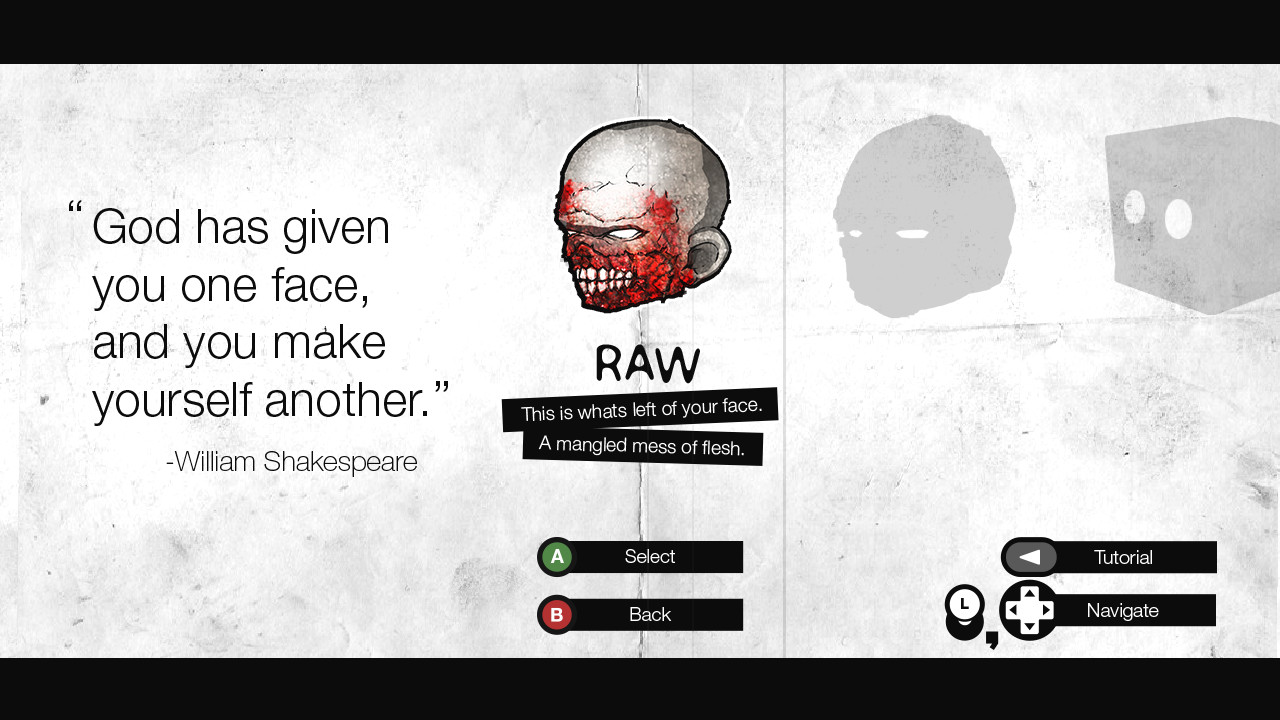 Overall I find that the art style fits the theme of the game perfectly, being rather cute and, at the same time, gory and grotesque. However, there were times in which I found it somewhat difficult to tell, at first glance, if something was in the background or the foreground. That said, animations are rather simple but they get the job done.

In terms of controls, even though the game was made with a controller in mind, it can also be played with mouse and keyboard, but it is definitely best played with a controller. That said, the movement and aiming controls could be a bit more polished. Sometimes I found it hard to aim upwards, even though I was moving the right analog stick upwards, and moving up or down the stairs didn’t always work as intended. This resulted in some annoying moments when trying to get past a set of stairs, loot as fast as possible before escaping a room or when trying to outmaneuver a bunch of enemies. It certainly takes some getting used to, but it can be somewhat frustrating to new players. 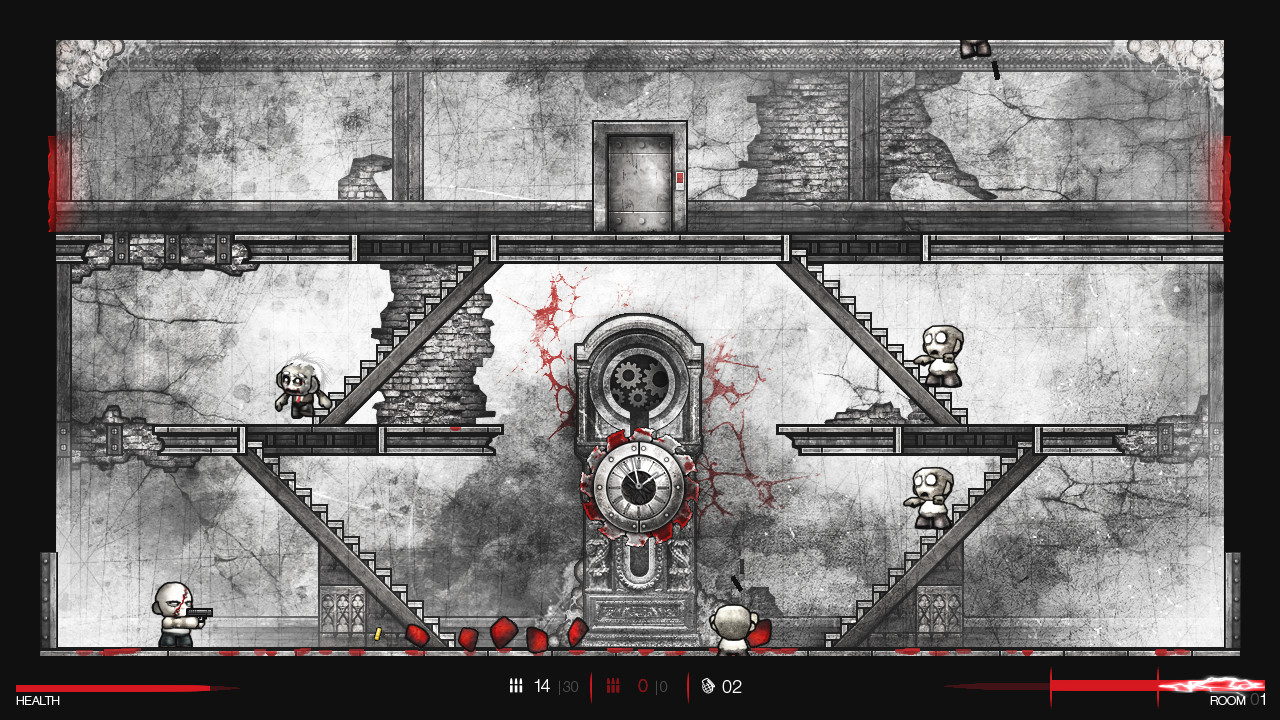 A map editor would be nice and the same goes for Steam Workshop integration. If the game was open to modding, allowing players to make their own faces, weapon attachments and rooms, it would significantly increase the game replayability but I’m not even sure if that is possible in technical terms.

That said, even though the game is fun and enjoyable, if you keep playing it for long periods of time you might get bored. Hence, I think that room13 is not a game meant to be played for hours straight, it’s something best played in short to medium sessions in order to make sure you don’t saturate yourself. Still, this is an extremely well done action platformer with rather unique visuals and mechanics that deserves recognition. It is difficult but not impossible and it rewards practice, careful planning and strategy. If you’re looking for something with these characteristics, room13 is sure to provide quite the hectic ride.