Monster books are a staple of pen & paper RPGs. After all, what better way is there to make life more interesting for the players than to throw a dragon their way? So any self respecting RPG that’s about going into the wild and fighting things (and many that are not about that) tend to get their own monster book.

The Symbaroum: Monster Codex is such a monster book, which introduces a bunch of new creatures for players to encounter. The book is split into three parts, the first being written in a semi-in universe way and details 27 monsters with adventure hooks and all that, part two adds a lot of NPCs and creatures that players can run into, but without a lot of text describing them, and then a rules section with guidelines for how to design your own monsters and a plethora of monster traits.

This review is based on the Swedish version of the Monster Codex. A few names and terms might be mistranslated in the review, but the content should be the same in both the Swedish and international releases. 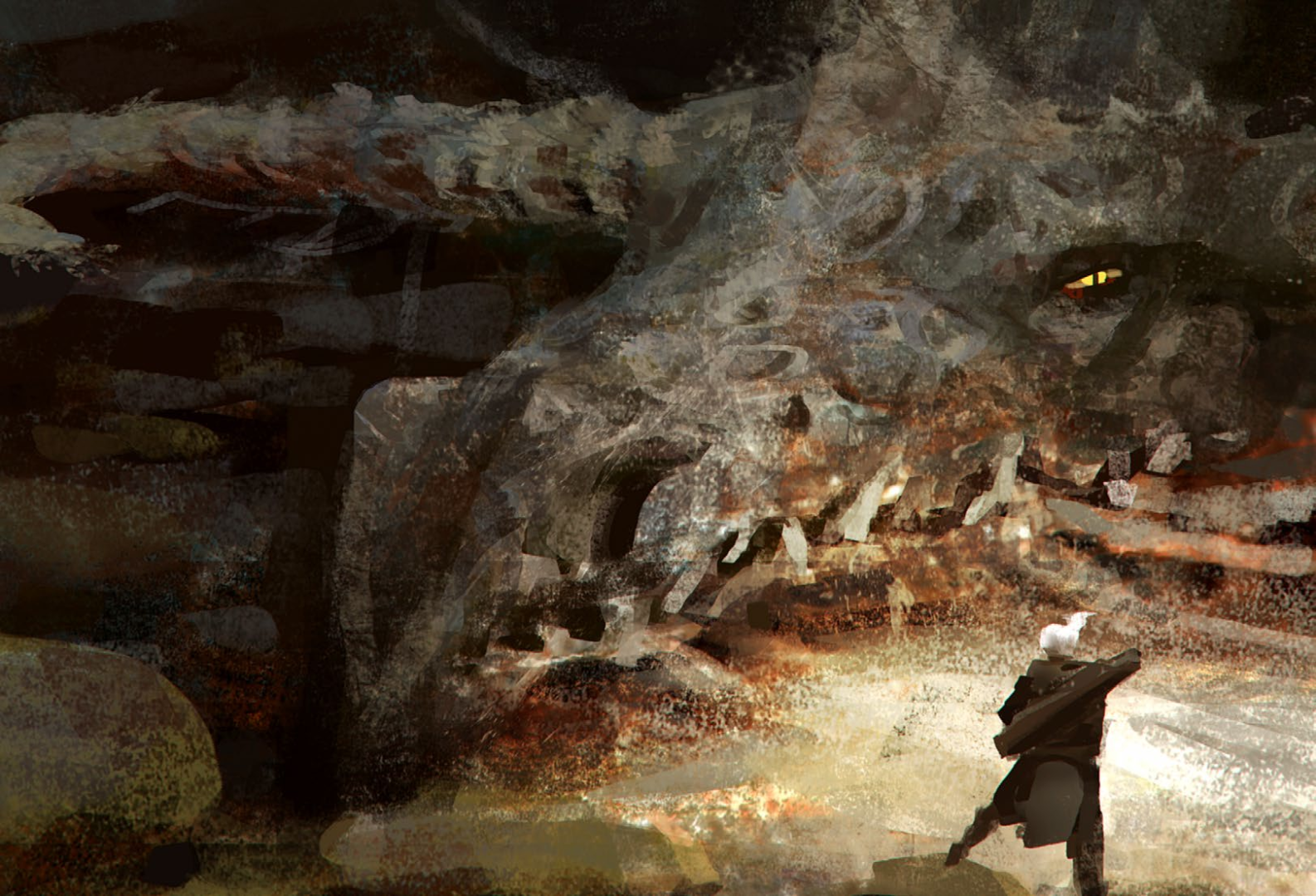 The majority of the book is taken up by descriptions and stat lines for the different monsters, with the first part giving somewhat detailed descriptions of them, including a full page picture showing the monster(s) and then three more pages dedicated to describing what these monsters are and how to use them with some of them also having additional rules or effects. 27 kinds of creatures are given the 4-page treatment, with some of these creature types then having a few sub-types, such as the mole-like Gwann which comes in two sizes or the Managaal, a beast that feeds on corruption and that comes in juvenile and adult form. 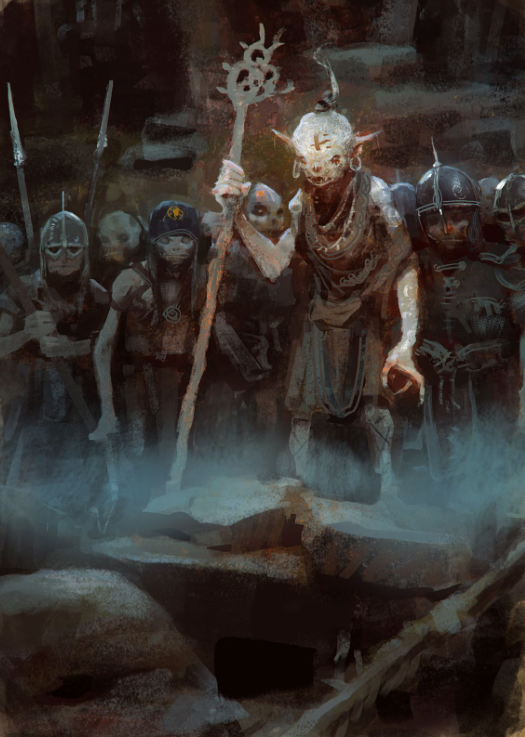 The description of these creatures start with a section detailing roughly what people in Ambria know about them. it’s not quite written the way someone in Symbaroum would write a description of them, but it gives an idea of what people know about them and why they might be of interest to both people living there, and the players. That’s then followed by an idea for how to use them in an adventure. Some creatures are well suited for building entire adventures around, while others are better used as threats that players will run into as they travel the lands. Many of the creatures also have notes that are meant to look like they were written by people from Ambria or Davokar detailing their encounter with the creature. Finally there’s a stat block which gives the necessary information to actually use the creatures. These are just like the ones in the core rulebook, with one addition. All of them have a word or a short sentence that describe how the creature is acting when a player runs into them. It’s a small thing, but it really makes it easier for a game master to know how a creature will act at a glance, and also give a good starting point when describing them.

There’s a good mix of creatures in the book, both sapient and non-sapient. Creatures include the majestic and very dangerous dragons, who can fly and breath fire down on their foes, the almost alien Arachs, who are spider like humanoids who can turn other sapient creatures into new Arachs, Troll Shadows, who are small misshapen trolls that came in packs and are fascinated by changelings as well as a bunch more. There are also a few that are not strictly creatures, but rather plants or the effects of corrupted nature. Not even the trees are necessarily safe to be near in Davokar, as ravenous willows can ambush the careless traveler who get too close to them. The big horned creatures with people riding on top of them that are featured in the core rulebook also get their stat line here. The writing for these creatures is also quite good and evocative, making most of the creatures seem both dangerous and interesting. The way the creatures are presented also gives an idea about just the general views of people in Ambria when it comes to the dangers of the untamed wild areas. 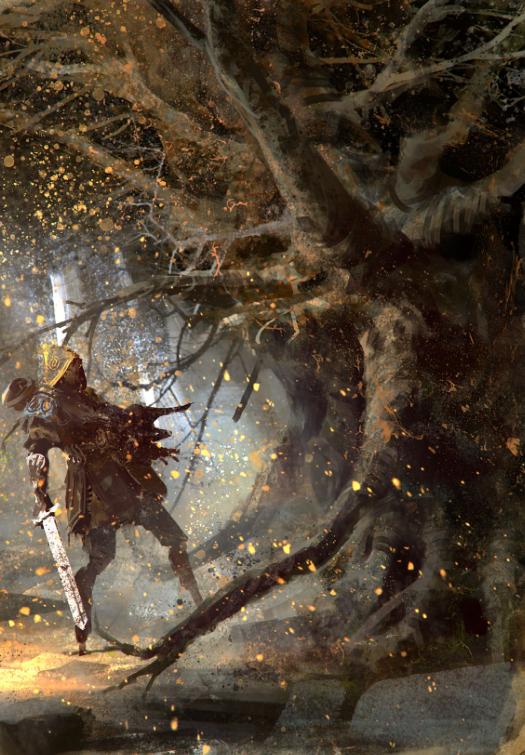 The creatures here tend to skew towards the more dangerous. There are a few that a band of newly made characters can deal with in combat without much trouble, but most of them are strong enough that they pose a threat to characters who have been out on a few adventures already, particularly if they are used the way they’re described, and not just as random foes who show up and block the road.

Following that section is one that has more common creatures and NPCs, starting with 44 NPCs and regular animals found in the populated areas of Ambria and Davokar. Soldiers, innkeepers, thieves, spies, goblin chieftains, witches and so on are here with stat blocks and short descriptions as well as dogs and horses. This is followed by another 44 creatures & monsters that you’re more likely to run into out in the wild. These are sorted by where they’re likely to show up, like in the outer parts of Davokar, or around rivers and lakes. Where the creatures that got the 4-page treatment tended to be pretty dangerous, these creatures are often, but far from always, more reasonable for new characters to go up against. Not all of them are necessarily hostile though, some are just animals that would rather not fight, and don’t have any interest in preying on something as big as a human.

The brunt of the rules section is taken up by new abilities for monsters, and much like with the new abilities in the player’s handbook the section starts with a table that tells you in what book a certain ability might be found, the monster codex or the main rulebook. The new abilities are things that fit the new creatures introduced in the book, for an example as there are dragons there are now rules for the dragon’s breath attack. Some of these new abilities have three tiers, similar to player abilities, while others are just a single tier. You don’t really need three tiers to find out how amphibious an amphibious creature really is, but knowing how good a creature with lightning reflexes is at reacting can come in handy at times.
With the new creature abilities comes a section on how to make your own monsters. What’s here are not really rules as much as guidelines for how to make a monster work the way you want it to, with notes on different tactics, and recommendations on what stats should be high as well as how many abilities a creature should have depending on its intended strength. It’s a short section but it tells you all you really need to know to make a creature from scratch. 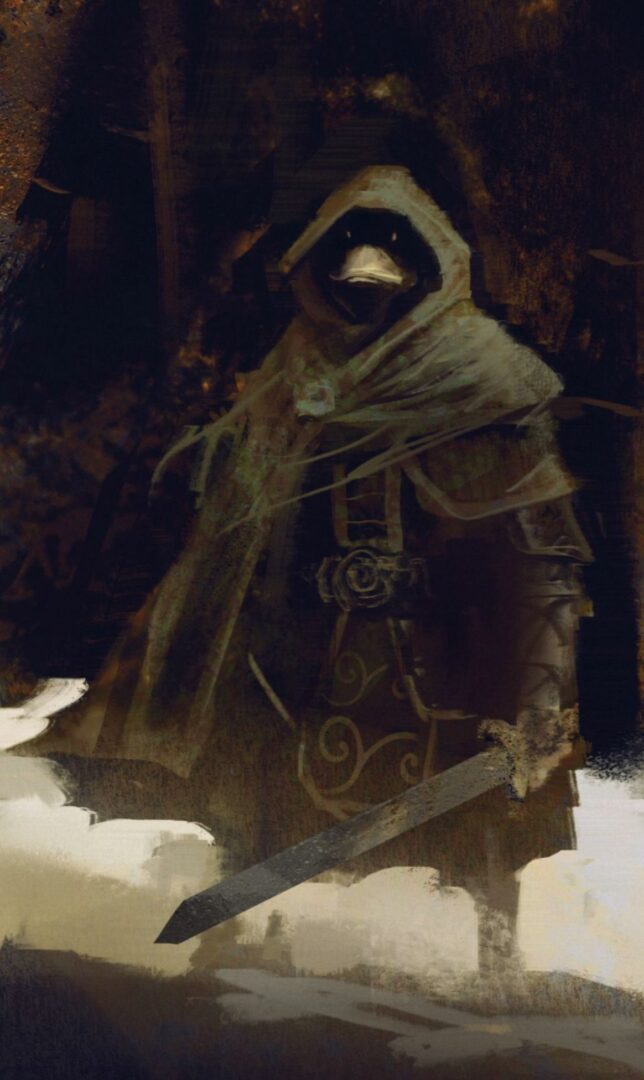 Following that is a section on how to roughly balance a combat encounter. This is less detailed than the CR system in games like Pathfinder and Dungeons & Dragons, though it’s arguably better as neither system can really know what the player characters are like and what their weaknesses are, and the way it’s presented here makes it both easier to work with and better for not giving a GM tunnel vision when it comes to the recommended “challenge level” (anyone who’s ever played in a game where a GM uses CR as a rule and not a guideline can probably tell you more than a few horror stories of things going horrendously wrong).

Finally there’s guidelines for doing straight up monster hunting adventures. How to prepare for a monster hunt, how to track down monsters, how much any outside help might cost and so on. There’s also suggestions for why player characters would want to do it, be it trophy hunting, or helping the locals with a monster infestation as well as roughly how much doing this kind of work actually pays.

Tucked between these major segments are small additional things, like suggestions for handling combat in water or how to deal with diseases. Also last in the book is a new playable race: Ducks. They’re a joke addition, but for anyone who want to go down a surprisingly deep rabbit hole, read up on the history of ducks in Swedish pen & paper RPGs. There’s a long history of ducks in them that goes back to the early days of RPGs.

If you liked the art in Symbaroum then the Monster Codex is going to be a treat, as there’s a lot of art in this book by Martin Grip, the artist who has made most of the Symbaroum art. And it’s equally good here as in the past books, that is to say it’s great. Just looking at the pictures of the monsters gives good inspiration, and they’re shown in their element, often doing something that’s related to how they’ll likely be encountered by the players. 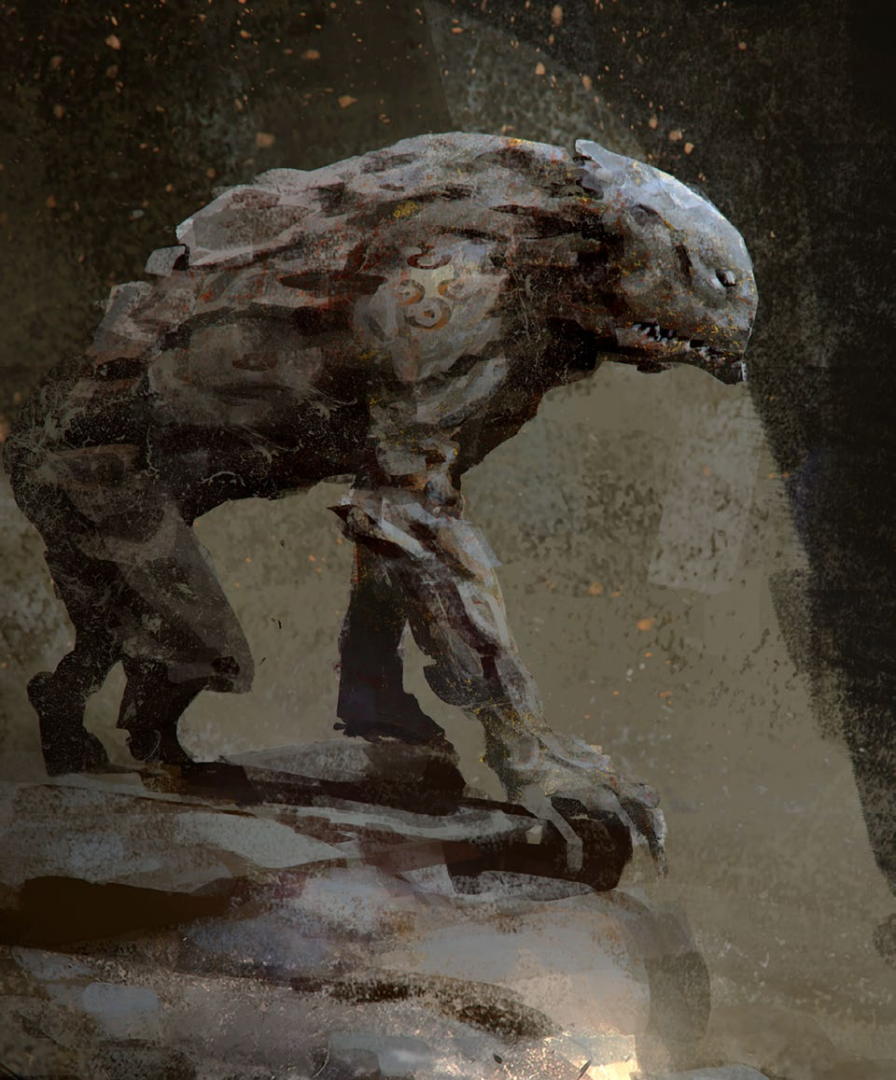 The book is also generally quite easy to work with. Finding any relevant information is not hard during play and things are organized in a logical way. There’s one pretty big issue though, and that’s some of the font choices. While the text that describes the creatures is easy enough to read, many of the in-universe notes are meant to look like they were written by hand or printed by someone, and have a font that can be a bit hard to read. Made worse is that these are often put at a slight angle. That’s not a problem when reading the physical book, but it does make reading the PDF on a computer screen harder than it should be. it looks pretty, but it’s a case where form hinders function.

Speaking of the book though, much like past Symbaroum books it’s a really high quality book. Print quality is once more excellent and the paper is thick. This is a book that should be able to survive a lot of use on the table, even if you need to do a lot of flipping through it.

Who does not like a good monster book? Despite the quibbles I had over some font choices I still think that this is a really good monster book. It gives not just information about how to use the monsters in the game itself, but also where they fit into the world and how people view these monstrosities, information that for some GMs will be more important than the stat blocks themselves. The inclusion of statlines for a lot of NPCs is also really nice and makes this a book worth getting even if you don’t intend to do a lot of monster hunting, but prefer to set your games in more urban settings.

this book does assume that you have the Advanced Player’s Guide, as it makes references to things that are introduced in that book, like traps. It’s really not necessary to own the Player’s Guide though as most of what’s in here can be used without it.

Overall this is a book that I think most Symbaroum players will want to pick up sooner or later. It’s not an absolute must have, the included creatures in the core book are enough to get you started, but it’s a really nice book to have handy, both for when you want to throw a monster in front of the players and when you need an NPC. I for one always bring this book with me when I play Symbaroum.