Plunge into the depths of this challenging roguelite

As an enemy’s axe glows I am ready to dodge. A few arrows and I can take him down but I have to be careful because I only have a few hits left before I die. This is just the 1st room of the second floor. It’s a long way down and in my mind, I’m already trying to guess how my next rooms will go: will there be maggots that launch petrifying bolts? Can I turn enemies against each other with some smart kiting? Mana Spark’s combat is refreshing. 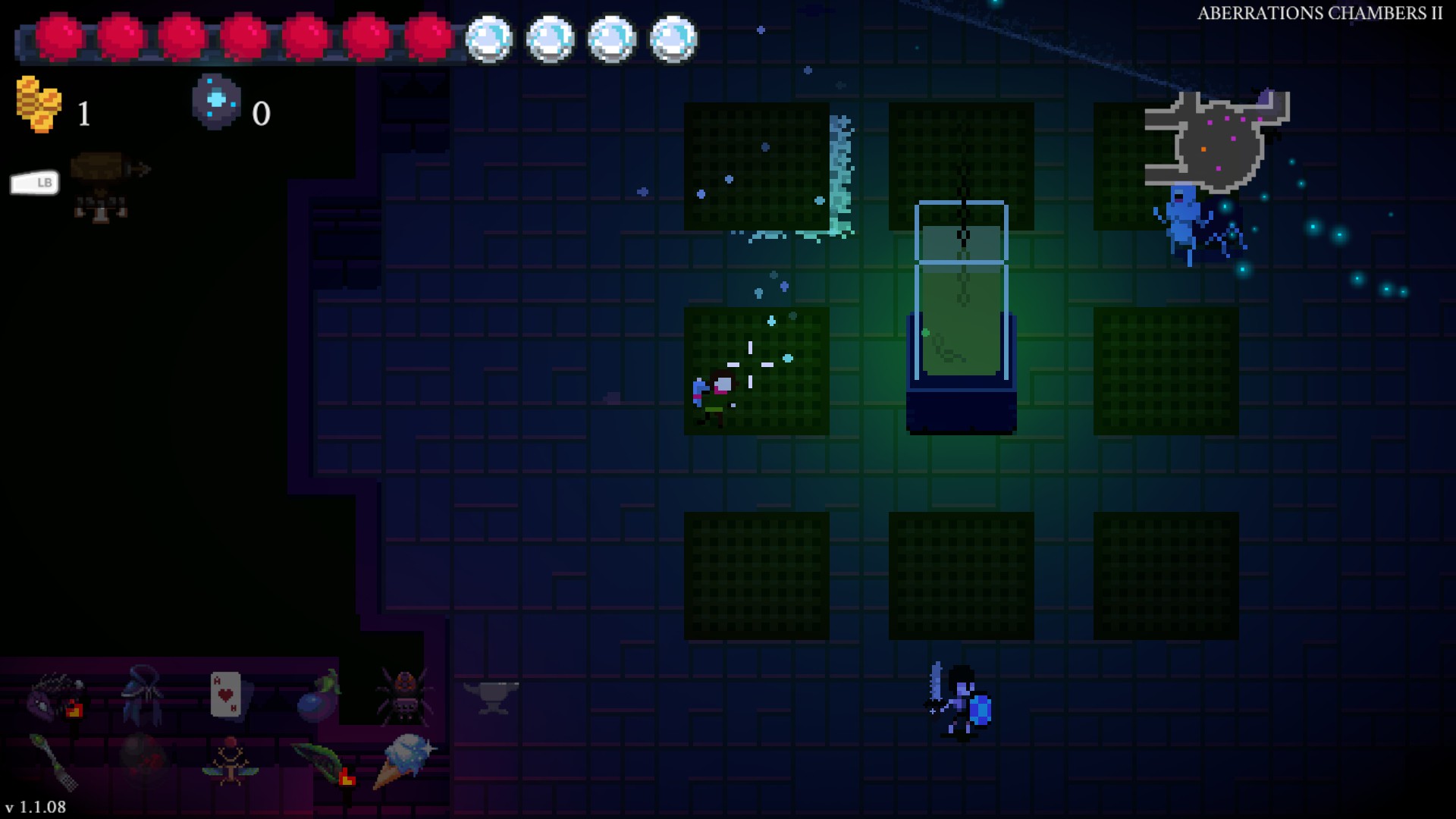 Why are there always spiders?

There is a great sense of wonder surrounding each encounter. The game begins in the hub area where you can use runes to unlock a variety of power-ups to help you on your run. You can power up and equip different usable items unlocked during runs, weaken enemies, or use food to boost your stats. Then you venture out into the woods, which are full of monsters.

The telegraph of an attack, the different enemy types and accompanying patterns, traps, basically everything that can end a good run, feels thrilling in Mana Spark. This is due to both enemy design as well as the characters. The enemies of Mana Spark are largely stock fantasy fodder. Bats, goblins, spiders, skeletons, etc. There are a few enemies that break the mold like a nasty monster with a tongue that can pull in the player, or other enemies, for a punishing bite. Or the pyromancer enemy that can turn ordinary torches into frustrating death. 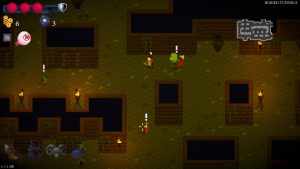 On the character design side, each of the 4 characters feels very distinct. The starting hero is an archer with a sluggish attack, average health and a dodge roll on cool down. However, unlocking the rest of the cast is also rewarding because they all feel very different: one character has a much faster crossbow and the ability to store dodges, another character has a trusty dog companion, and there is a knight with sword and shield to round out the roster. 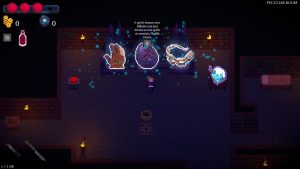 Items are also an important part of overcoming the odds. Items can be found on altars every few levels or bought with gold at checkpoints that are placed carefully between levels. These checkpoints are also where you can save and quit your run. Some items are standard stat increases, but others offer more interesting strategies. Some are more offence-oriented like doubling projectiles, or others are geared towards survival such as slowing down enemy projectiles. The enemies items, and characters feel good separately, but it’s the combination of the two with the speed and flow of combat in Mana Spark that feels impressive. 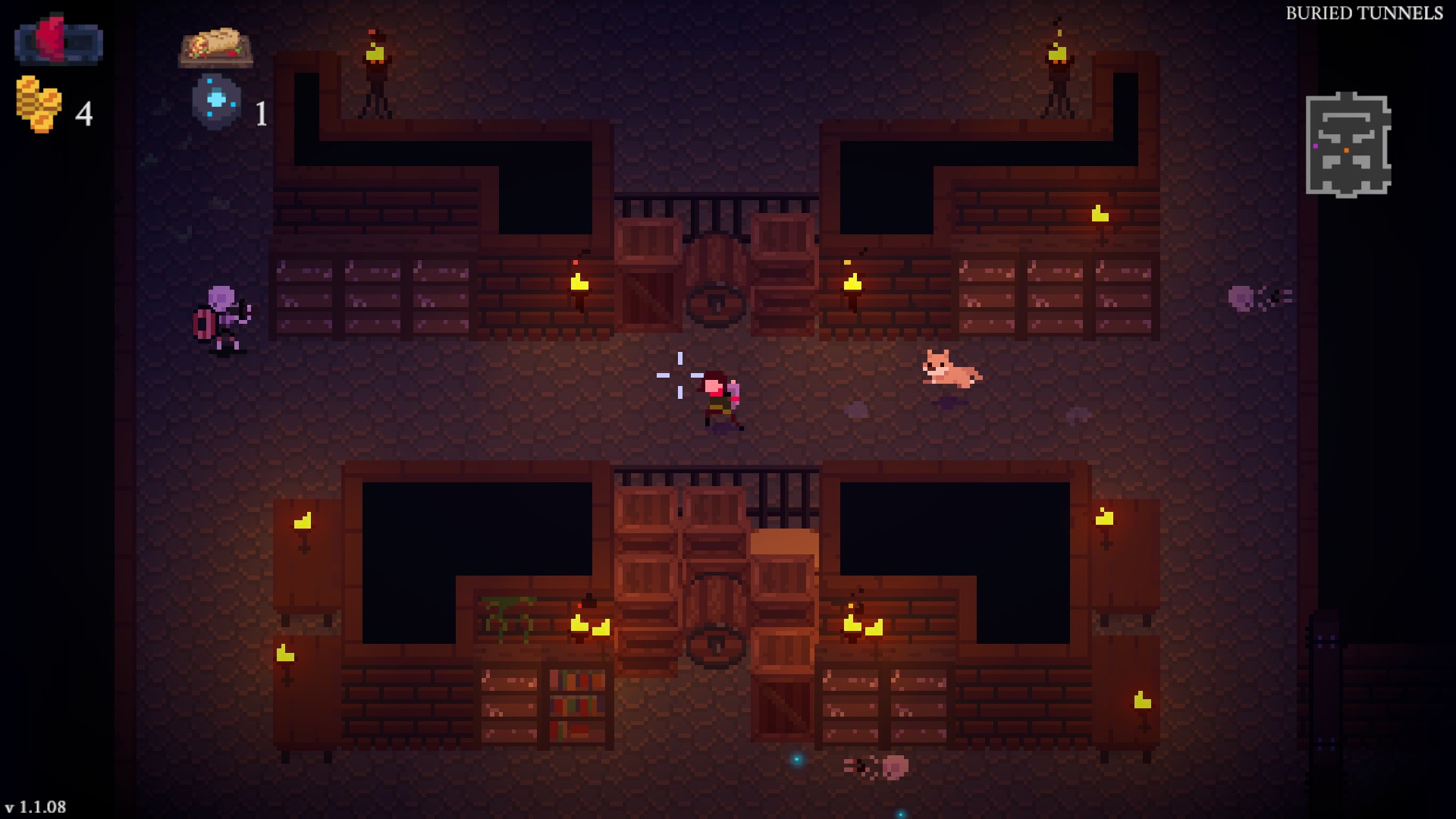 Trading blows with enemies has a healthy weight. Seeing the response of an enemy deflecting your attack feels so costly because of the speed of combat. It’s a fatal mistake to miss a shot or to mistime a dodge. The cost that comes with this speed is an exciting change of pace from more frantic twin-stick, bullet hell inspired roguelites. 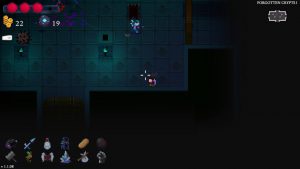 Combat also manages to feel dynamic because of how enemies can synergize or hurt each other. The different traps found in the dungeon can easily be turned against enemies with timing. But, lining enemies to shoot each other feels even more satisfying. Enemies can also work together by boosting damage or summoning new enemies. These factors can make even basic scenarios overwhelming, in a good but challenging way. 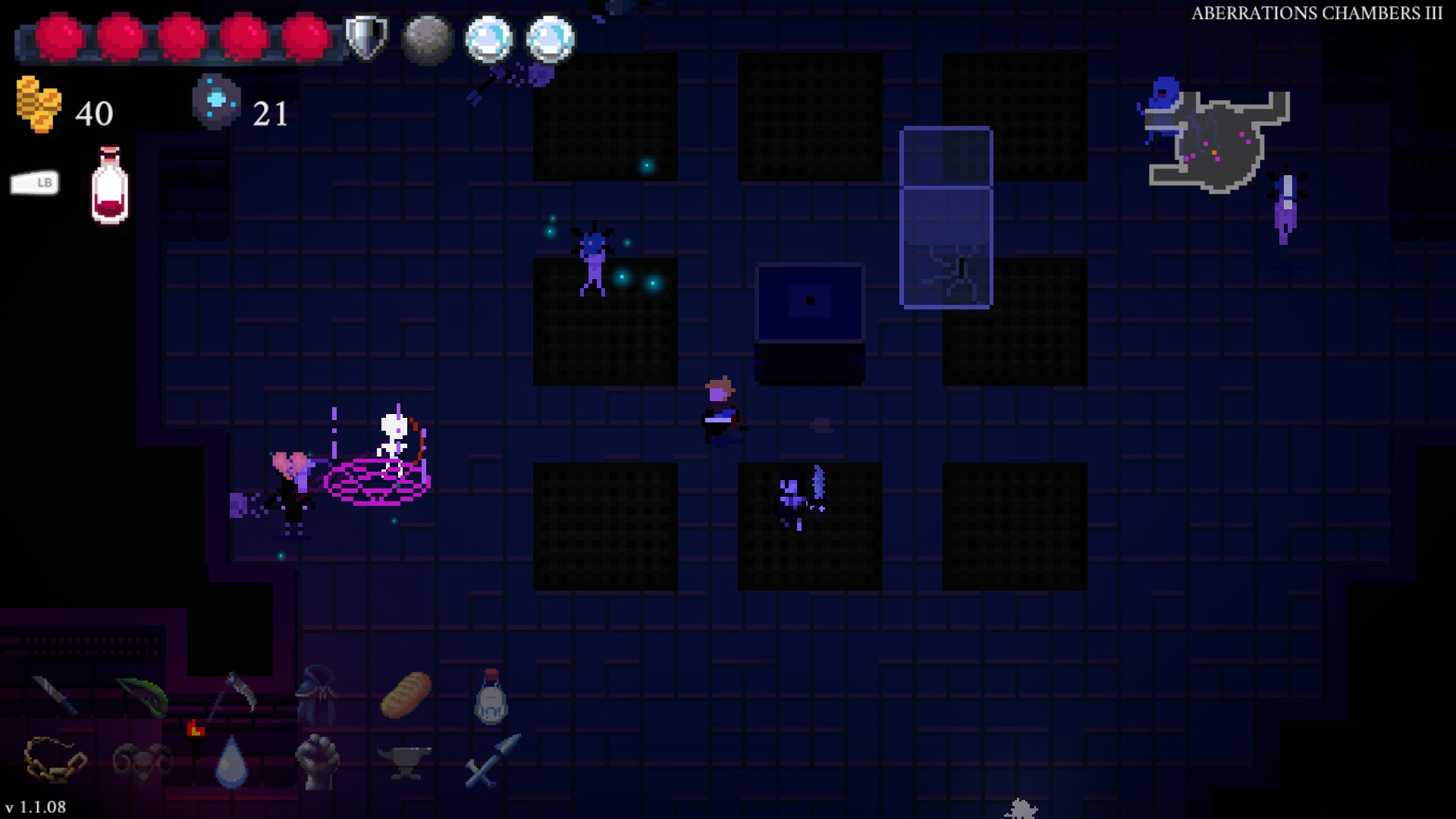 I first got Mana Spark near release and I enjoyed it. It still had cathartic battles of timing, but it got stale. The same items and enemies kept popping up and the cycle was wearing thin. It was pretty good but not great. Now with the new update released on March 31st, 2020, Mana Spark feels like the game I wanted it to be from day one. 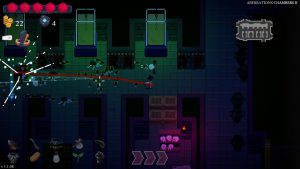 The update added a slew of content that offers more variety to the game. At launch there were only 3 characters, the newest one is The Naturalist with her dog. The new items are bolder: modified health orbs to ease the pain, pets that help you out in battle, a chain that offers AoE damage, and more. There is also a new shop at the camp that unlocks a special technique for each character. There is also an extra full level after the original game. The new enemies feel exciting to fight. On top of all this, local co-op has been introduced into the game with player two playing as the adorable dog. 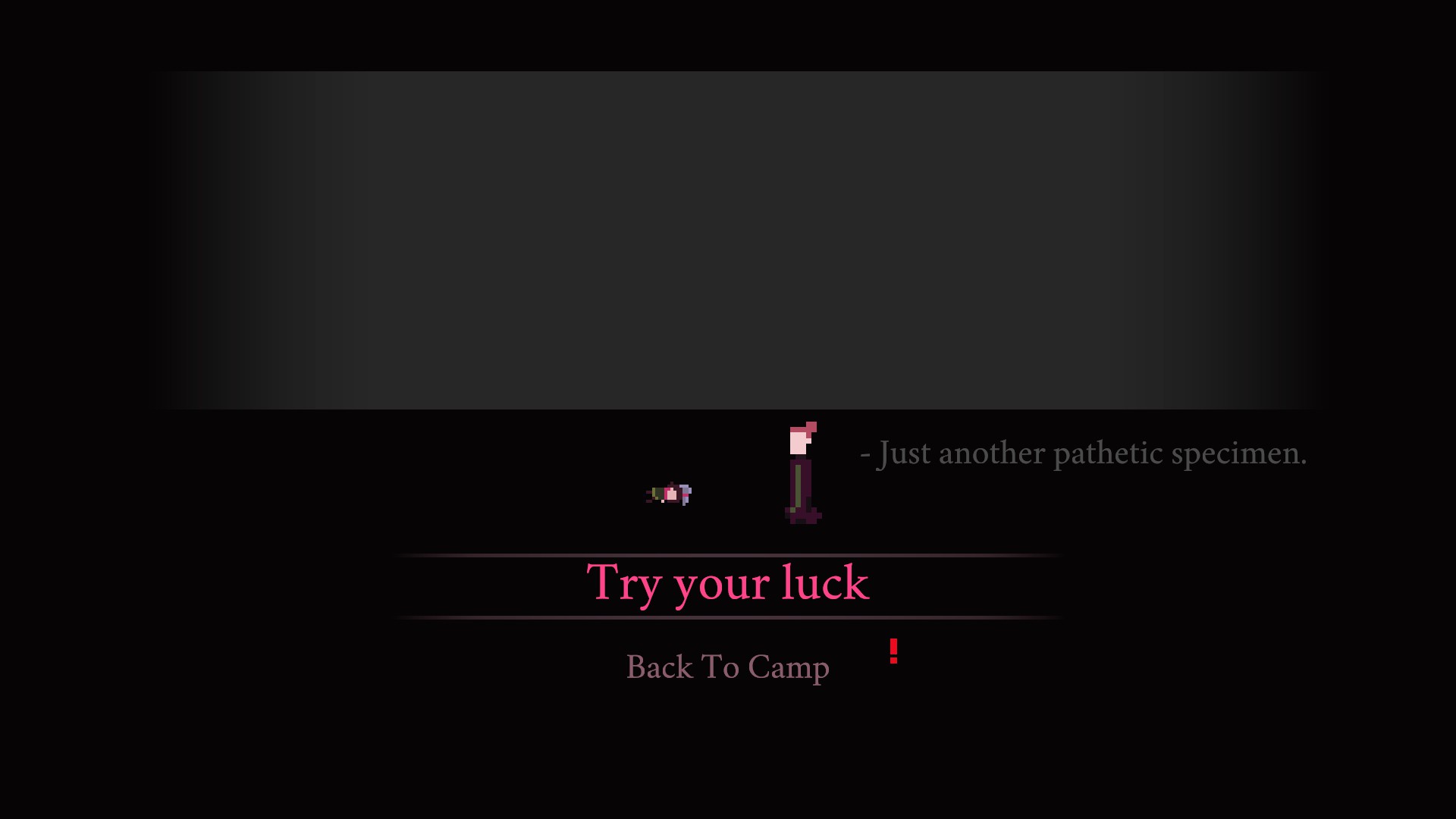 Your Mana is Low!

There are some shortcomings. The challenge feels imbalanced: I normally die from regular enemies, but bosses are way too predictable and easy for the most part. As much as the new items add variety to the game, a few more alternative levels or randomized elements to map design would have been welcome. On a smaller note, the story of Mana Spark is largely in the background and there is quite a bit of lore that can be found in the game, but it never quite jumps out. 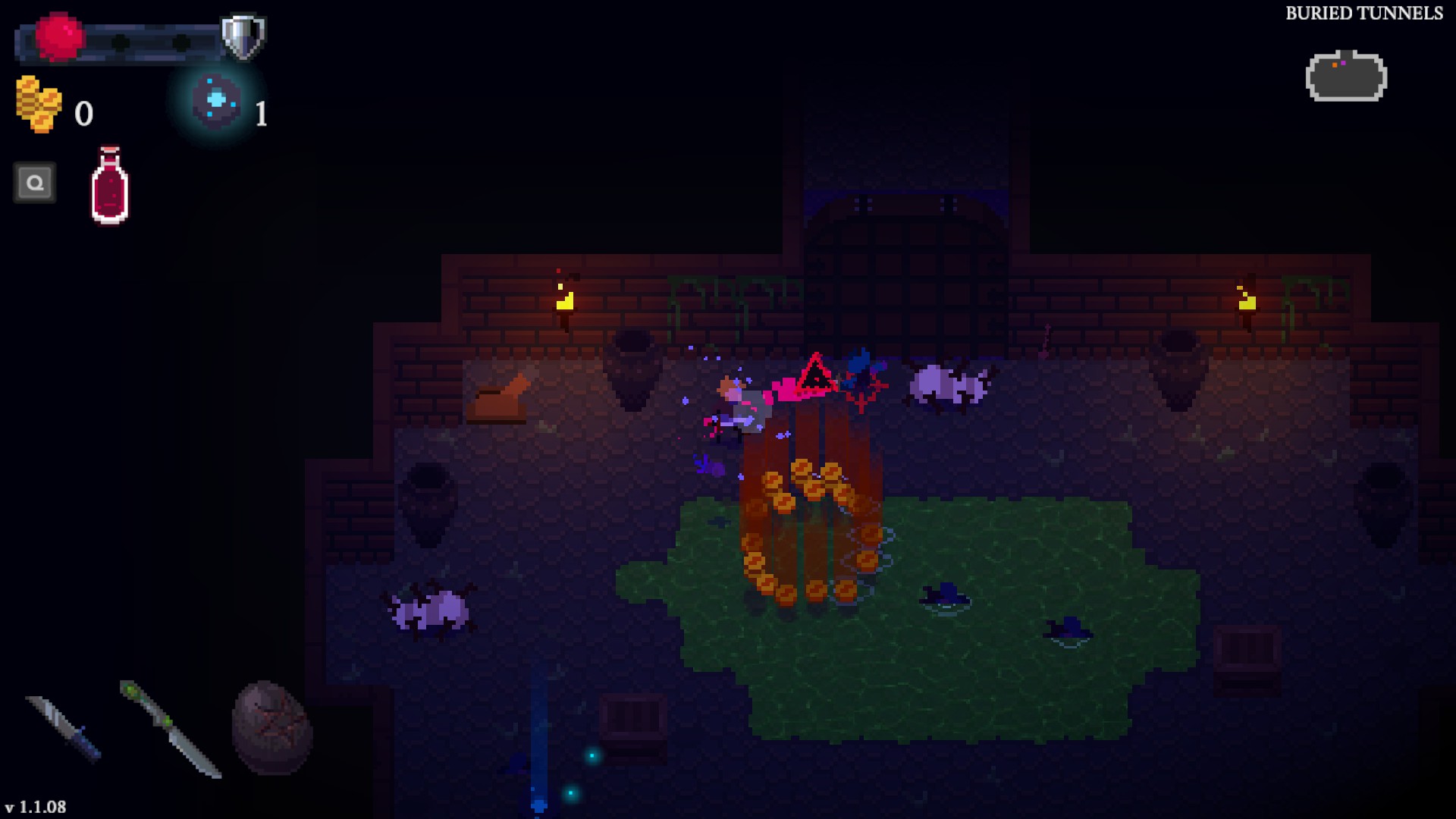 I have a soft spot for Mana Spark. From splash art to animation, I really enjoyed the visuals. The combat has a heft that is rare in this genre, and it feels great in bursts. It’s lacking the flash and pull of others in the genre, but it’s a neat hidden gem.