Capcom VS Capcom: The Card Game

I like trading card games. I used to play Magic the Gathering and Yu-Gi-Oh more than a decade or so ago with my friends at every opportunity. No longer do I have much of an opportunity to physically play but my fondness toward them has never ceased. Throughout the years, I have tried out many CCG (Collectible Card Games) including big-namers like Hearthstone and Shadowverse. Those never quite clicked with me due to the lack of interactivities during the opponent’s turn and the inability to mix and match cards from different factions. Then suddenly a mysterious card game by Capcom under the codename of Project Battle, now known as TEPPEN. The game was initially released to a selected group of streamer influencers, with the general public gaining access weeks later. I was hit with a one-two combo. TEPPEN features unique gameplay that requires players to not only strategize but also respond to various situations in a limited timeframe while having cards that feature familiar faces that appeal to me mechanically and aesthetically.

Cards in TEPPEN can be divided into two main categories: character cards and action cards. Character cards are the equivalent of monster/creature cards with cost, toughness, and attack values. Action cards are spell cards and will only have their cost and effect listed on them. A deck has to have 30 exact cards with no more than three copies of cards with the same name. The sole exceptions to this rule are the legendary cards in which multiple copies are not allowed. The objective of the game is, of course, to reduce your opponent’s life to zero. If this all sounds like a typical card game to you, you’d be correct but this is where TEPPEN diverges from the normal formula. 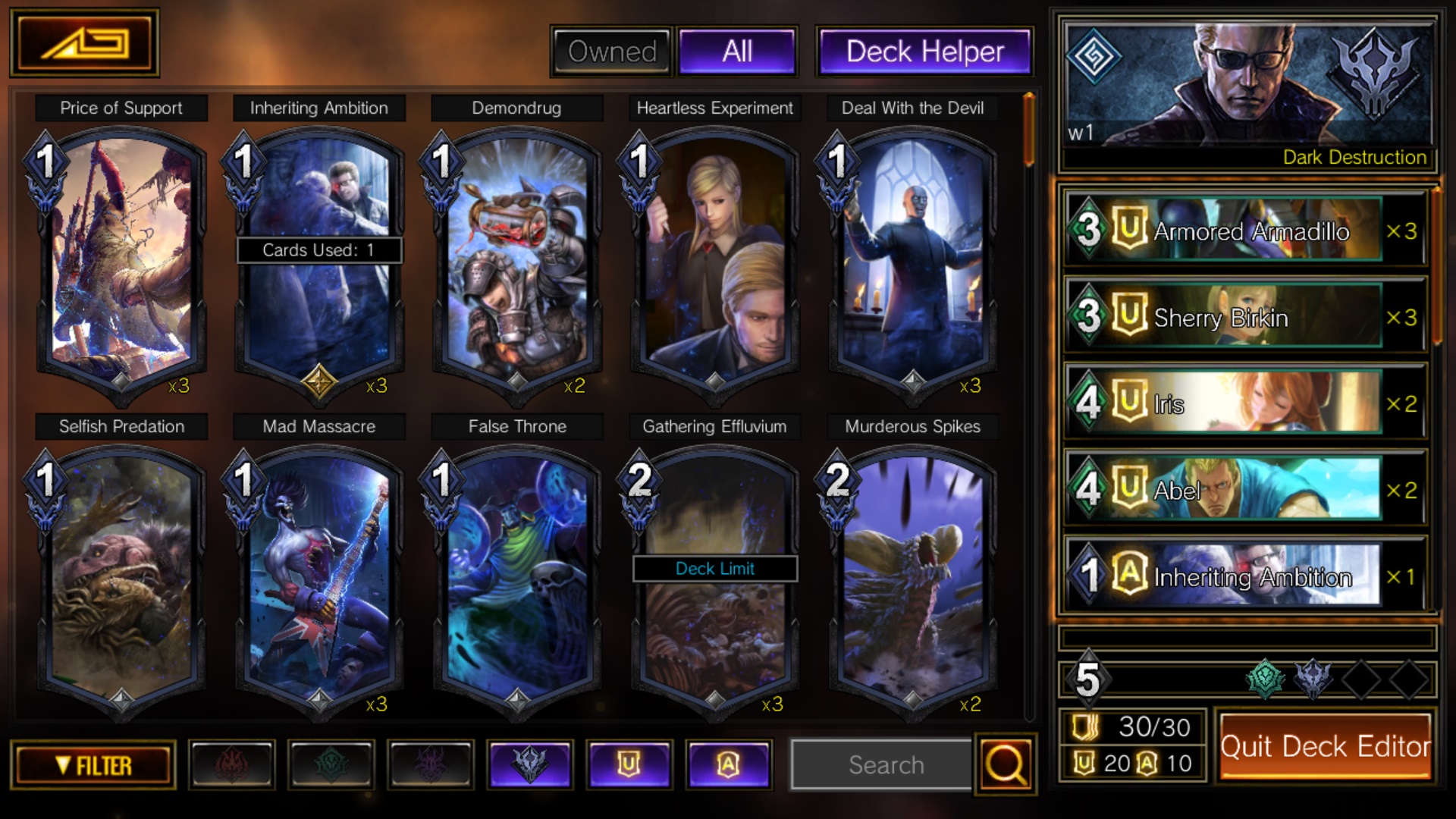 The thing that sets TEPPEN apart is that the entirety of a match is played in real-time. This is a stark contrast to regular card games that are usually played on a turn-based basis. Save for a special phase that occurs when an action card comes in, character cards can be played simultaneously at any point in time. This fundamental difference breaths new life to the aged genre. Certain mechanics in TEPPEN are so deeply rooted in the one-of-a-kind design of the game that they would not exist had the direction that it has taken been a traditional one.

One of the changes made to accompany the real-time nature of the game is how the resources and mana are accumulated. Because the concept of turns does not exist here, mana cannot just keep accruing by one with the passing of each turn like its CCG competitors. Resources here will constantly build up at a fixed rate as time passes until maximum capacity is reached. How the cards attack also works in more or less in the same manner in that it is continuous. Once they are put on the field, a line that represents their attacks will start to build up toward the end of their “lanes.” Assuming that the opponent also has a card in the same lane, both character cards will deal damage to the others at the same time. If not, the damage will simply go straight to life points. There are three lanes on the playing field meaning that each player may only have up to three character cards on their side. It should be noted that action cards do not occupy any of the playing field spaces. 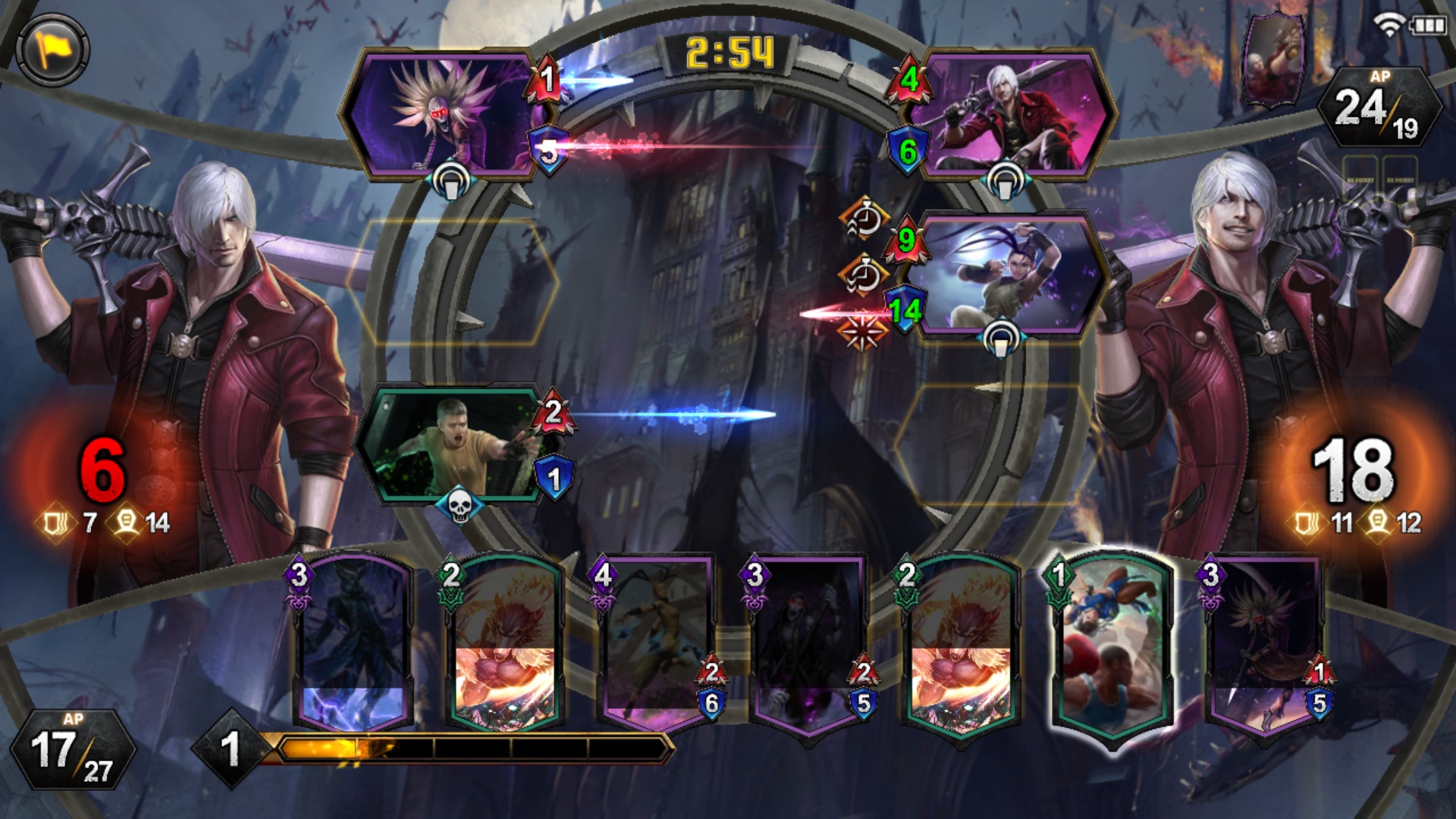 There are five different factions/colors in TEPPEN. Each faction has two immediately obvious playstyles represented by the heroes, or faction leaders, unlockable from completing the story mode. What the colors can generally do is not that dissimilar with what you would see in Magic the Gathering. For example, the color red is still capable of rushing in and dealing direct damage, and the black faction can destroy cards or summon great value creatures at the cost of sacrificing your own life. These colors also feature some new abilities that can only be found in TEPPEN such as “halt” which will stop the afflicted unit from attacking and retaliating for X seconds or “rush” that allows the unit to enter the field with its attack readied halfway. These abilities will mostly be tied to certain color although it is not entirely uncommon for other factions to also have them. To add to these, heroes are equipped with a single Hero Arts, from a pool of three selectable Arts for individual heroes. Most Hero Arts are powerful but can only be used when you have enough art points gained by taking damage, destroying cards, and the like. You can either build decks around these for maximum card synergy or use them to counter certain cards or strategies to even the playing field. Players can also mix and match cards from different colors but be warned that your maximum mana resources will be drastically decreased from 10 to 5 to 3 and so on for each color added. A bit too steep for my liking, I must say. 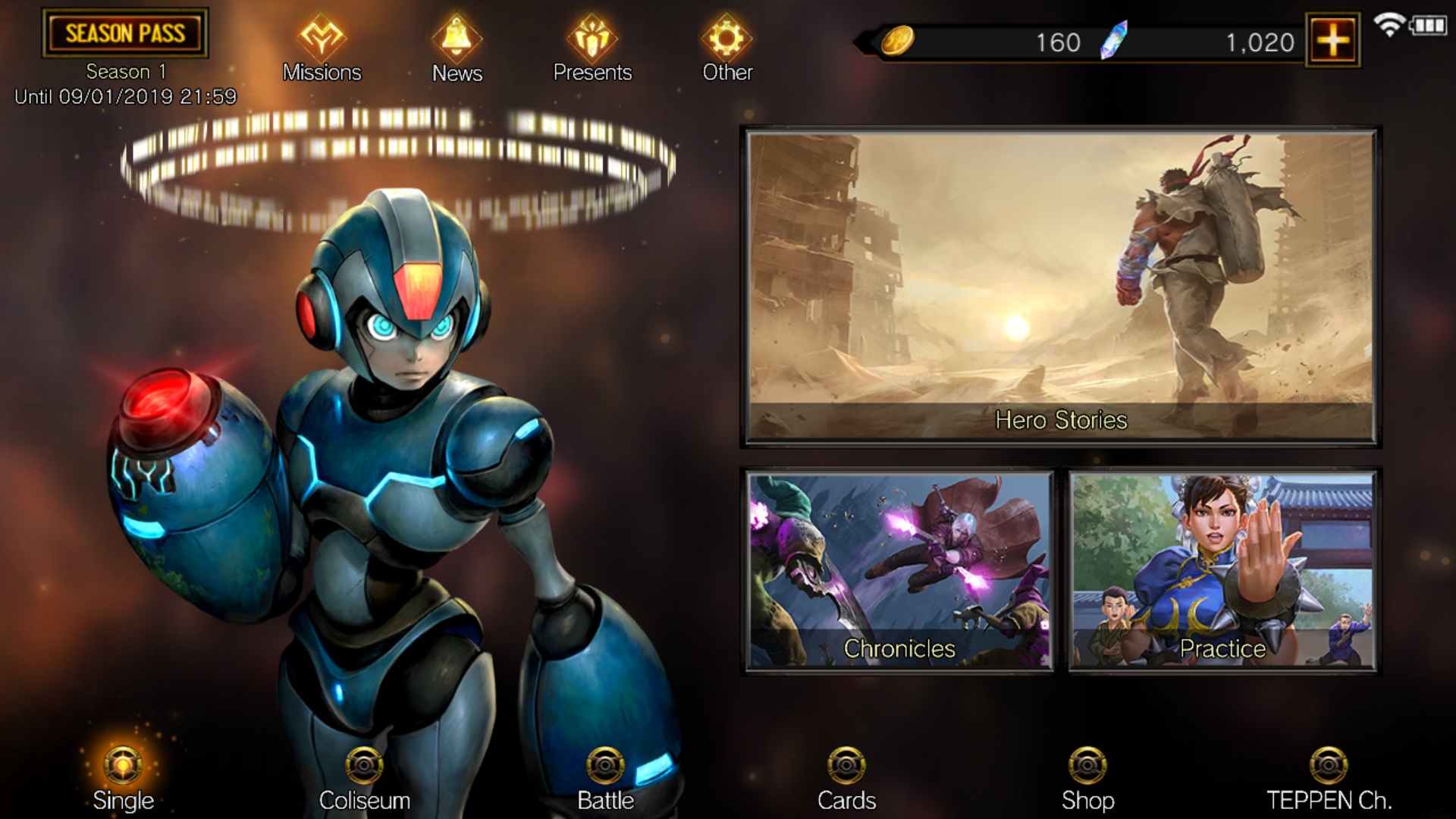 You might have probably noticed by now from the various screenshots and/or footages that you are seeing some of the most iconic characters in video game history. Ryu from Street Fighter, X from Megaman X, Wesker from Resident Evil, but what do these characters and franchises have in common? That’s right, they are all owned by Capcom! TEPPEN, despite being a card game, might as well be the Capcom all-stars game that we sorely need after the blunder that was Marvel vs Capcom Infinite. If we go by just presentation and art style alone, TEPPEN already had MvCi beaten to a bloody pulp. Each card is beautifully drawn and either features characters of all popularity levels or a nod to the games that they are hailed from. Let’s not even start on how cool the animations for each faction leaders are. While my favorite is easily X’s Gaea Armor, I don’t think I will ever get tired from seeing Dante using Devil Trigger or Morrigan performing Darkness Illusion. To top it all off, it excites me to know that this is only just the beginning. If the game does well enough, I expect Capcom to pull out all the stops and bring in everyone from every franchise they own into TEPPEN with the ultimate goal of turning this into a celebration of all things Capcom. 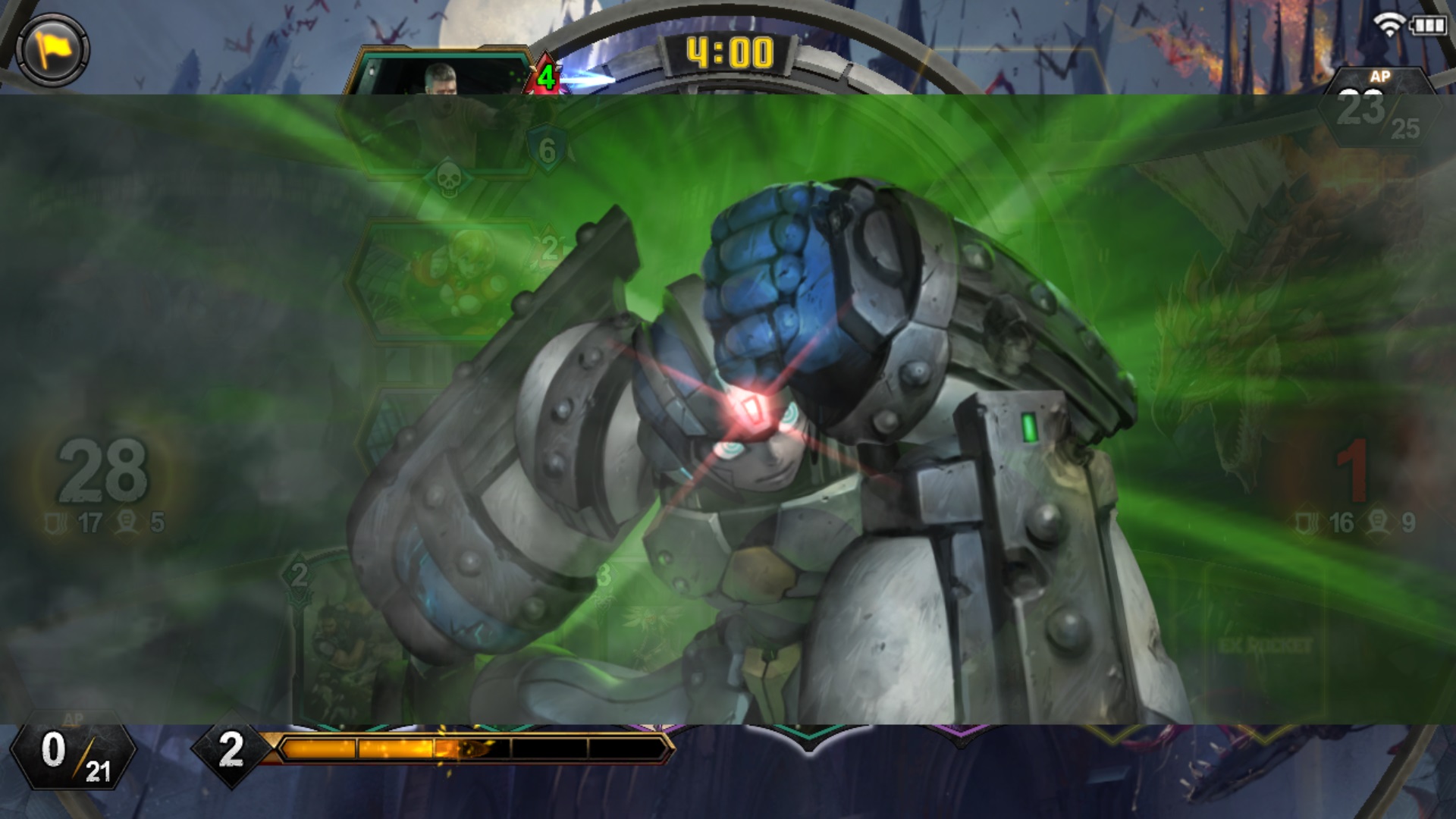 The first time you fire up TEPPEN, you will receive about 30+ packs of cards. A pack contains 6 cards so you should have at least 180 cards at the start which should be more than enough to build your first deck of 30 cards. This is not including various rewards from leveling up the heroes, completing chronicle (challenge) mode, and daily missions that will either yield pack tickets, cards, zennies or souls. Zenny is the in-game currency that can be used to get more packs and souls is TEPPEN version of Heartstone and Shadowverse dust/vial system which allows you to craft cards. 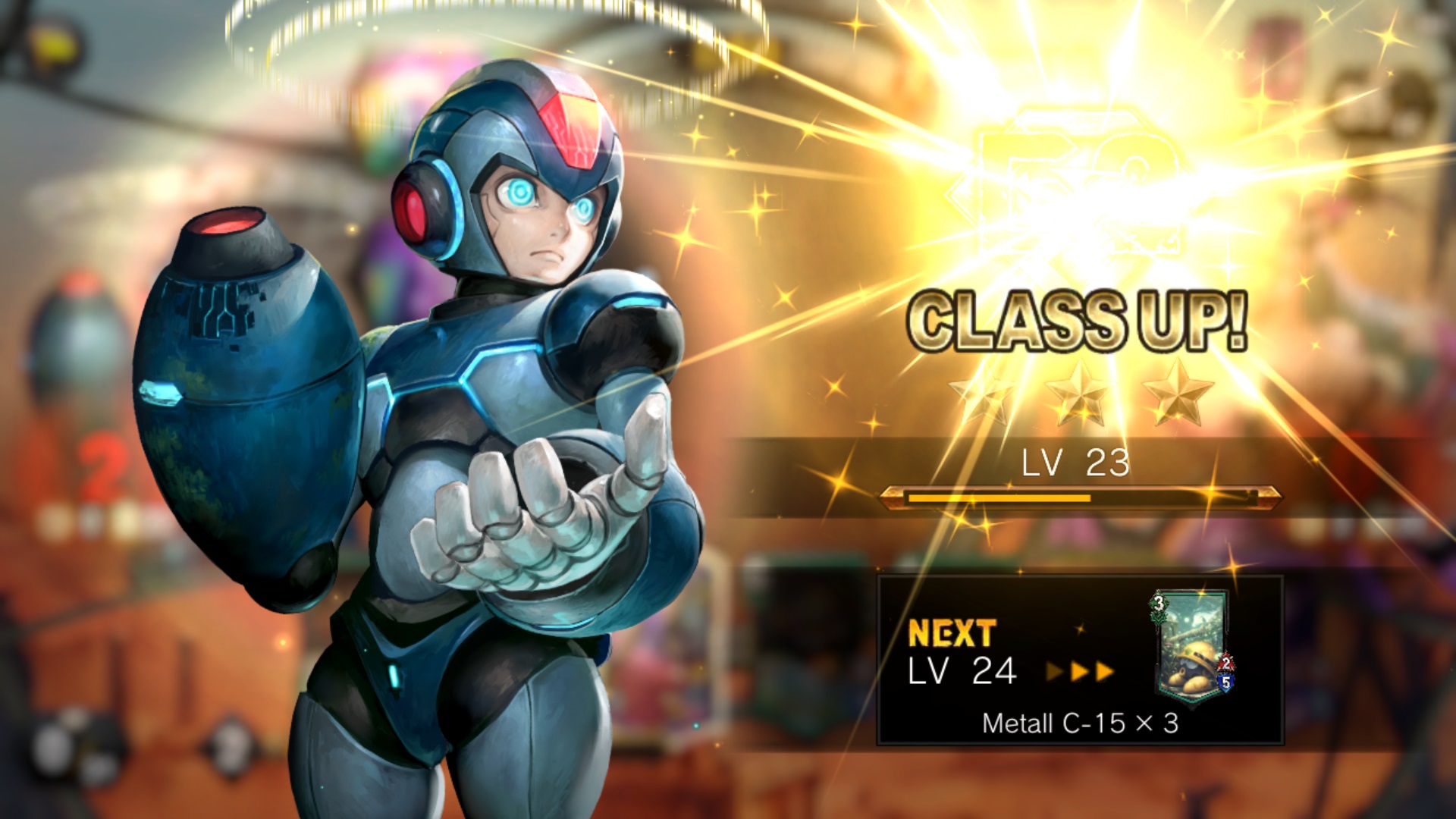 If you would like a bit of a pick-me-up, you can also purchase a Season Pass with the premium currency, jewels. Currently, jewels can only be used to get the season pass and more packs with the possibility of cosmetics in the future. The Season Pass not only boosts total exp gained per matches completed but also extra missions that can yield all currencies including jewels and other benefits. The Season Pass is self-renewable meaning that you will get enough jewels for the next season without having to spend more. All of the Season Pass missions and their rewards that will become available over time can be viewed before the purchase. If you are uncertain whether or not you will be able to complete them all, feel free to check out the list. 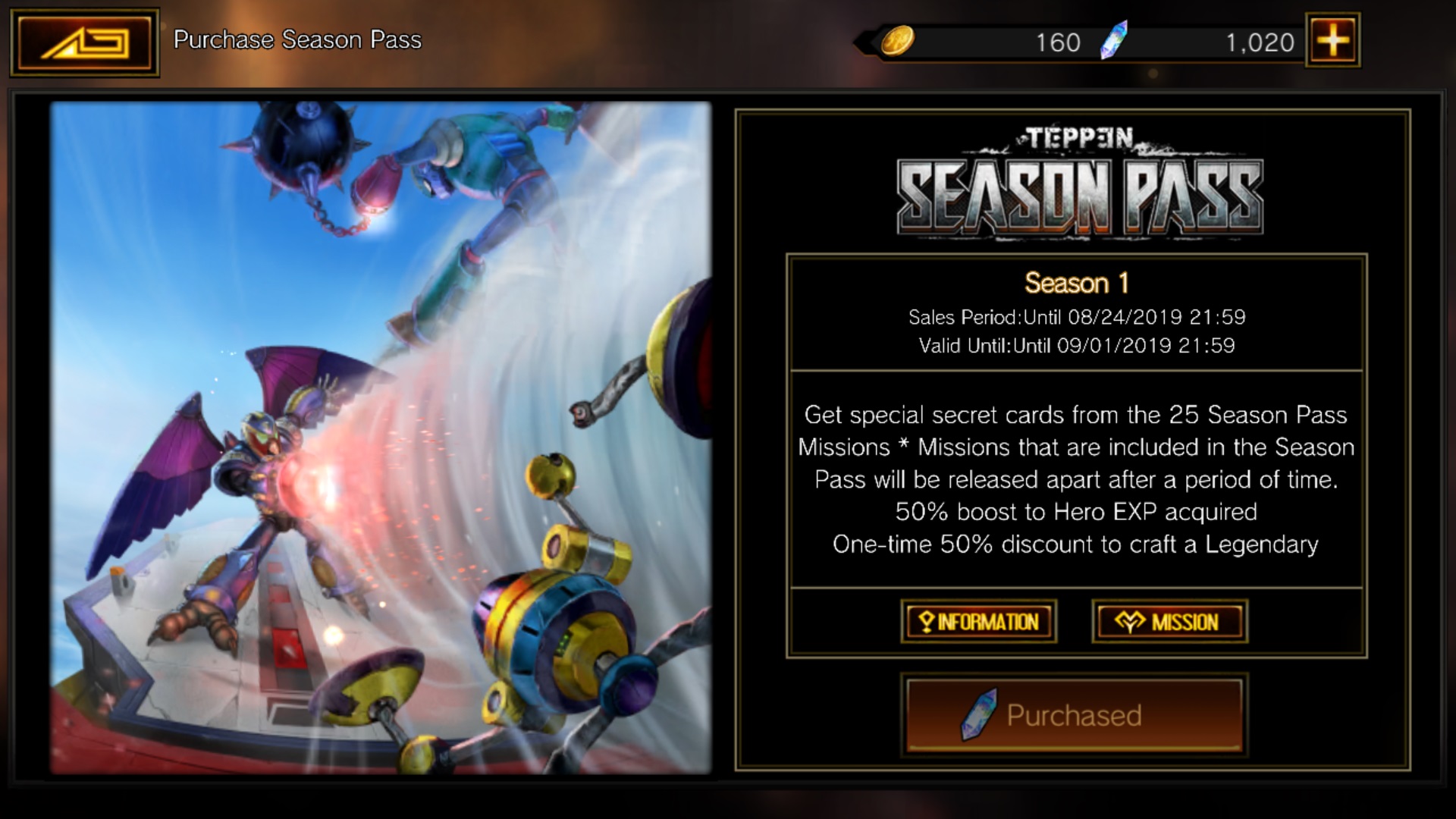 Technical issues and others

While I have enjoyed TEPPEN immensely since its launch on July 4th, it is not without a fair share of technical issues. I have encountered mysterious errors, crashes, suspicious disconnection issues, and bugs that cause the game to freeze, leaving me unable to do anything until someone surrenders. The majority of these will often end in your loss which will be the source of frustration to some. To give a real example, I had run into two instances that I have already reduced my opponent’s life to zero, one of which I had gained a star ranked, only to respectively get an error on my and encounter a freeze that caused myself to surrender some hours later because I wasn’t too keen on losing a game that I had already won. Well, until I had to use my phone for work, that is. If I have to pull a number based solely on my experience, I would say that about 20 of my 100+ games ended in one of these issues. I cannot help but feel that some of these issues can be alleviated by allowing a one-time reconnect to the on-going game, but it is what it is. I hope most of these get fixed as Capcom has been going on a redemption arc lately with their recent releases but only time will tell. 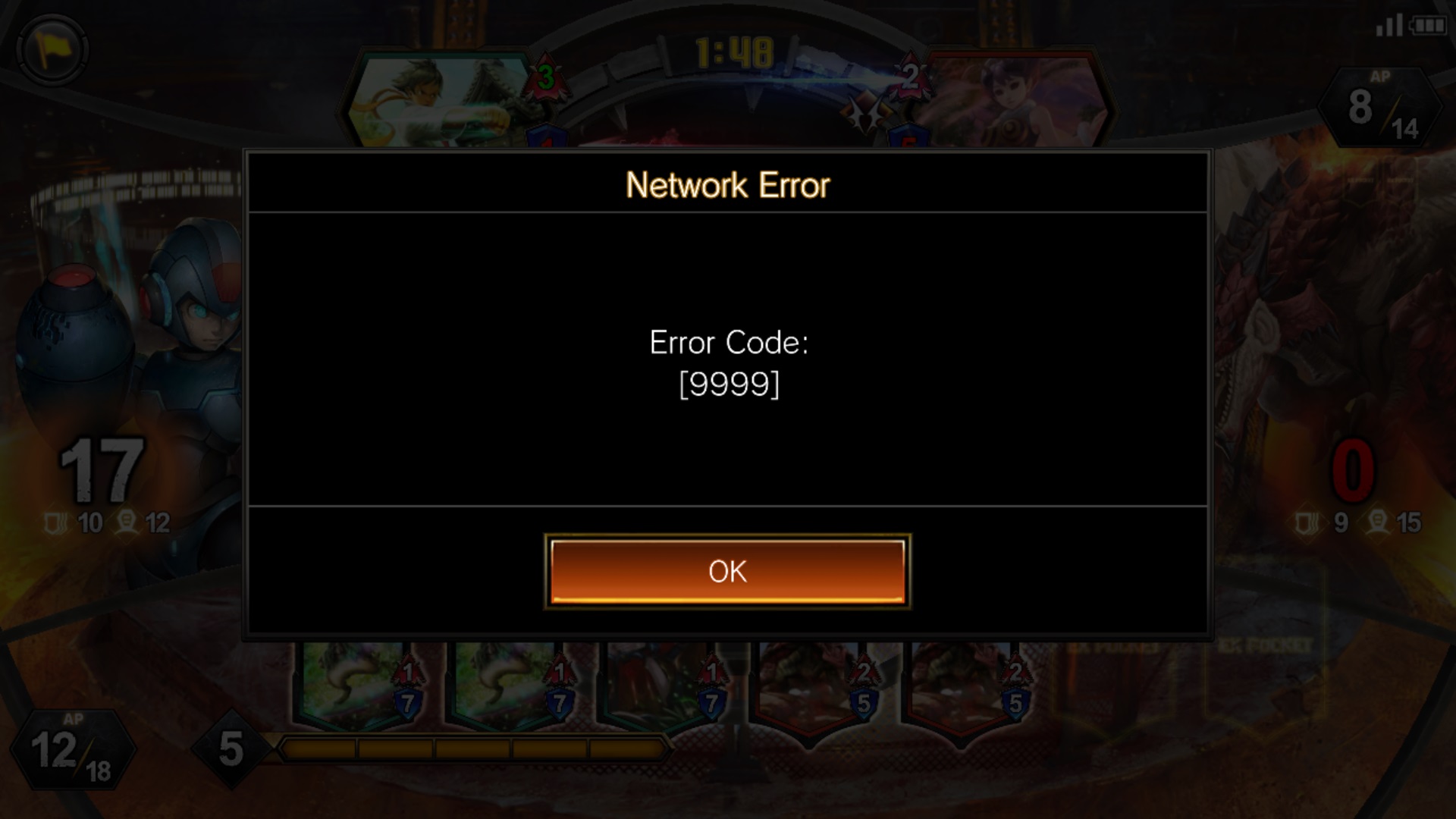 I also would like to mention that I have an issue with the game. Specifically, how the card that you are dragging and about to play gets reset back to your hand when the opponent plays an action card or activating hero arts. I cannot see this as anything but oversight as this effectively disrupts your ability to play cards in a split-second time-sensitive context. The player should only be affected by the abilities of cards within the confines of the rules, not by how the game mechanically behaves when things are played out in certain sequences.

TEPPEN is a card game that has real-time gameplay elements making it unique enough to stand on its own. Using Capcom characters and referencing various events from their games are great boons that will draw in players of different ages and backgrounds. The cherry on top is that the art for both faction leaders and actual cards is simply excellent as characters, both old and new, are realized by various talented artists. There is even single-player content, the likes of a story mode, and challenge (chronicle) mode to unlock things along the way that also count toward level progressions that will unlock even more. Unfortunately, not everything is peachy as the game is afflicted by a bit of various technical issues. Despite this, TEPPEN is still a strong card game that is shaping up to be a celebration all things Capcom that both video games and card game enthusiasts should give a try. 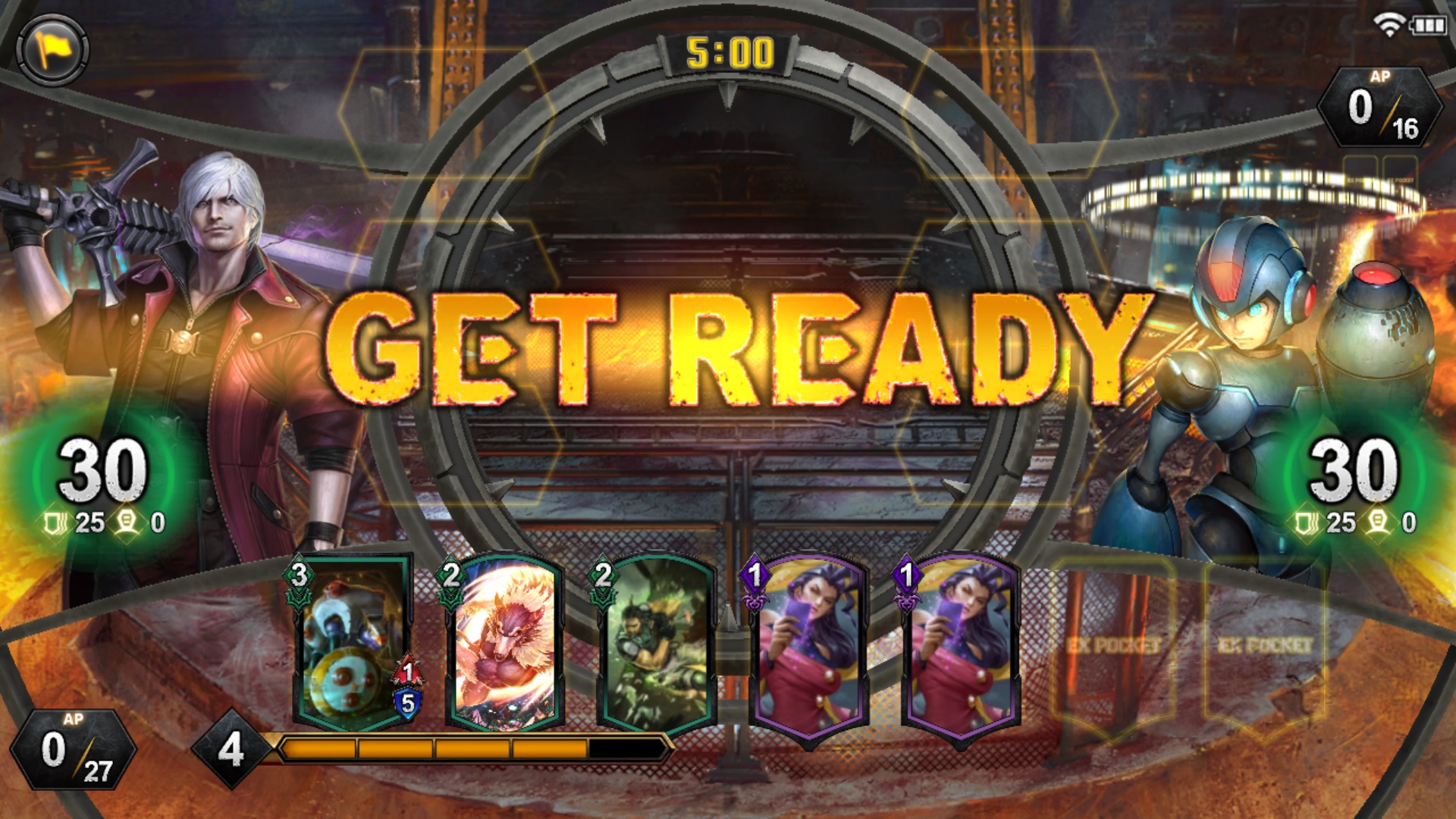