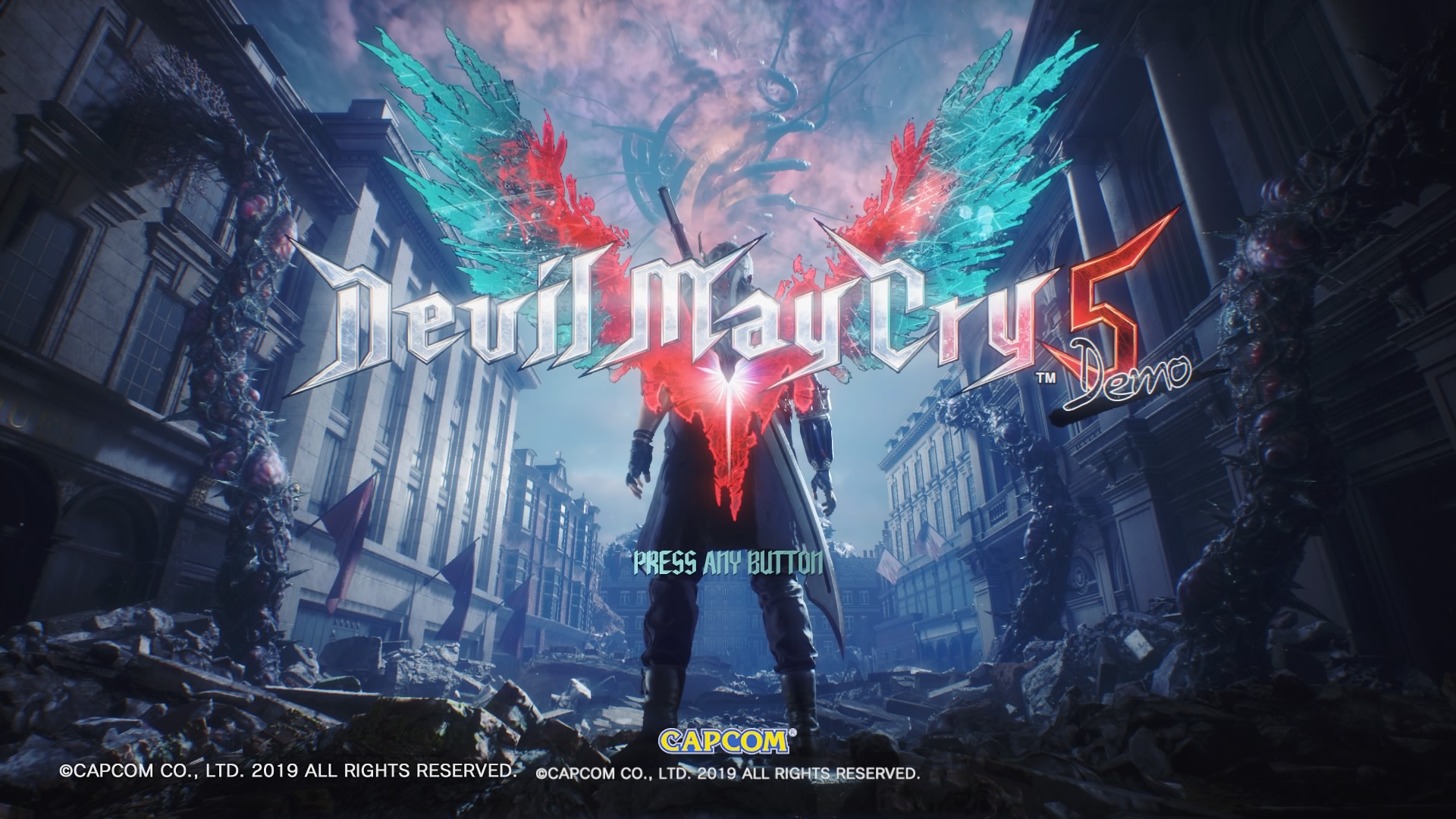 Can you do it with style? Read how the Devil May Cry V demo allows you to mow down demons with flair to get that awesome style rating you’ve been dreaming of.

A hot and explosive date with Nero

Three protagonists have long been announced for DMCV: V the newcomer, Dante the OG, and Nero the prior MC. In this demo, you get to play as Nero who comes with a new bag of tricks. Blaze through your opponents in style and take on the Boss to bring the heat.

Story: Some kind of tree is doing something… I guess?

Let’s be clear here. If you are looking for some good story content to hook you into the game’s lore, you’ll have to look elsewhere. Namely, the trailers. This demo is all about you, Nero, and the gameplay. Oh, and of course this really spooky-ass tree.

To assist or not assist?

Devil May Cry is known for the freedom the fighting gameplay offers. Once you get in a groove, you can do some slick sequences. But, what if you want something easier? What if you just want to mash attack and look good while doing it? Worry not! The assist mode is back again to help you.
Don’t be lazy! You still have to take care of dodging and strategy. It’s only one piece of the puzzle. 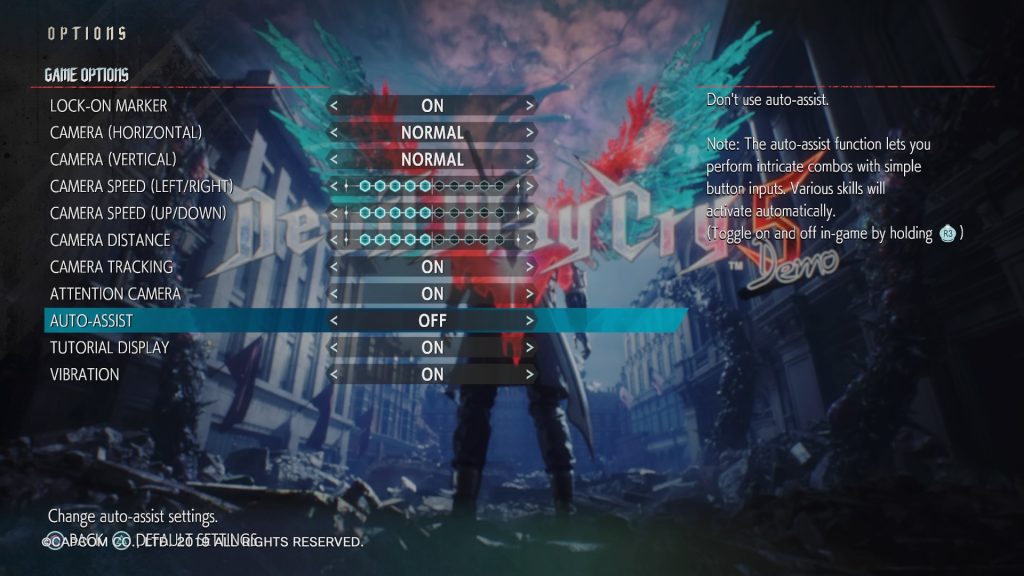 The Controls: Standard or Customized?

Why is this a question? There is a good reason for it. The standard Controls are sufficient but less than stellar. It puts the majority of the attacks on the face buttons: Melee, Gun, Devil Breaker, and Jump. Makes sense? On the shoulder buttons are, Rev (Exceed), Lock on, and Break Age. As for why you should think about customizing it, it becomes clear once we talk about the gameplay. 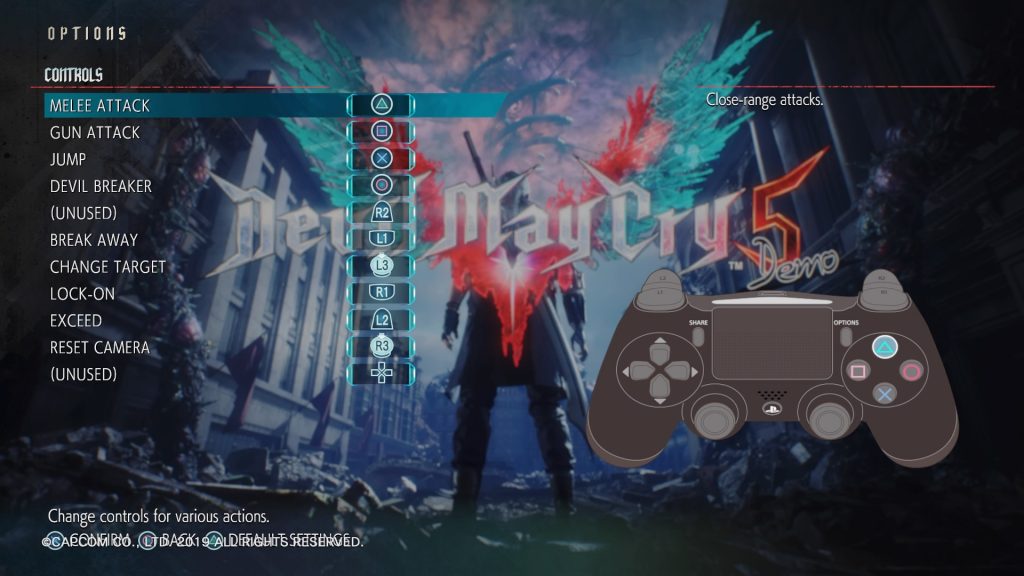 We don’t have to waste time and talk about peripheral things like platforming or puzzles as there is no such thing here in the demo. This means we can put our focus directly where Devil May Cry’s forte is; fighting.

We absolutely have to talk about the newest addition to Nero’s repertoire, his new Devil Breaker. It is a kind of sub-weapon Nero can activate by pushing O/B outside of Lock-On. There are multiples of them and each has their own distinct standard and charge moves along with restrictions.

1. They can break if the opponent hits you while using it.
2. Explode it by using Break Age
3. Charged Devil Breaker is a one time move and destroys it.
4. You can’t switch them. The only way to use another one is to break your current one.

It might sound limiting but the actual usage shows something different. Here’s a Breakdown of the Devil Breakers in the demo:

PunchLine
Action 1: Shoot your fist and it goes and keeps going at your opponent for a set amount of time
A2: Ride on it like a surfboard and lift your enemies up with an attack. Jump off at any time to return to A1.
Charge: Unleash a hefty punch going through any kind of armor.

Gerbera
A1: Unleash a shockwave and repel projectiles back.
A2: Use the shockwave to propel you away like a jump.
C1: Shoot a Laser.
C2: Jump in the air to unleash a bouncing scattershot.

Over
A: Use your Lightning Palm to dish out massive damage
C: Plant a bomb inside your enemy and let it either explode on a timer or ignite it with a charged gunshot.

Stylish Action
First things first. Yes, it can suck. Just like every other game. If you only want to play through the game, mashing the attack buttons and dodging is a possibility. The assist modes even help you out. Just don’t expect to appear on the leaderboards with this.

The more creative people utilize the sandbox of moves and enemies DMCV is offering. It’s up to your creativity and dexterity to show off your sick skills and choreography. They set up their moves in small chunks and dish them out in an eye-popping display of mastery. The good thing is anybody can do it.

So what does it mean for this demo and why did I mention control customization? Here’s where the advanced stuff comes in. Several systems push you above 80% to 90% above the rest.

Those are Special Movements, Exceed, Gun Charging, Taunting and most importantly Cancels. You can push even further by unlocking more moves by spending your Red Orbs.

The majority of your Special Movements are Lock-On exclusive because they require directional inputs. You can lift them( and yourself) upwards, smash downwards, use alternate attack patterns, or use your Devil Breaker Snatcher move to pull. Make no mistake, Nero isn’t exactly a fast character. This is why he can either pull lightweight enemies to him or pull himself to heavyweight ones using the Snatcher.

Just like in DMC4 Nero has a dedicated button that pumps up a special gauge with multiple stocks of Exceed. You begin with one and can unlock up to a second one. Each normal attack depletes one gauge. Special Moves is full depletion. The more stocks you have, the stronger your special moves become. Here’s the kicker, if you time your Rev correctly, which is at the end of an attack, you get one free stock. This means once you have mastered the timing down, your attacks will always be blazing amazing.

The Gun Charging is the biggest reason why you’d want to customize your controls. As it’s on Square/X on default you will have a terrible time pushing the other face buttons. Especially O/B. Why is this move so important? It’s a heavily buffed shot you can use to stun your opponent and gives loads of style meter to keep it going.

Taunts have a lot more utility this time around. Want to add more flair to your performance? Is the enemy is too far way and you’re in the air? Taunt! Nero will do a stunt air hop bringing you closer to your place of choice and it keeps the Style Meter going. Want to add salt to the wounded enemy? Dropkick them for extra style points.

Now you heard of everything special Nero can do but there is one thing you need to understand to master the gameplay. Cancels. Use moves to interrupt your current move to create a myriad of attack sequences of your liking. Find and master them and you’re on the best road to a Smokin’ Sick Style ranking.

Fans will notice in this particular demo, the urban style of environments are similar to the Reboot/Alt. Story DmC and I’m sure that’s where they took some cues. Talking about cues, they also adopted the dramatic Final Strike Slow-Mo-Zoom-In Effect. The characters no longer look like how they were until DMC4. This is due to the RE Engine using face scans (called Photogrammetry) for character faces. So yes, you’re actually looking at human faces! From the single cutscene I saw, it retains its Over-The-Top and cheeky identity.

I can’t say much about the music but I liked what I heard. Just like DmC, they adopted the dynamic music of becoming louder according to your current Style Rank. If you want to know what you’ll be hearing for Nero, look up the Promo Music Video “Devil Trigger”:

Those who only want a quick playthrough aren’t going to find much with this demo. It’s very short as well. Enemies aren’t exactly challenging and the boss can be a wall, stopping many in their tracks. It took me at least 4-5 tries before I managed to finish the demo due to the boss alone. I can see many of you quitting right there.

On the other hand, the demo is geared towards replay value as you can keep your gained orbs even after finishing the demo for further replays.
DMCV’s marketing of its gameplay is seemingly geared towards the hardcore fans and this demo is no different. They will squeeze out every ounce of juice they can get from this demo. Many of them will prep themselves with it to build up their muscle memory to create a shortcut the day the full game comes out.

On a personal note, so far it feels like DMC and plays like DMC with improvements, new additions and changes. Newcomers might require some time to “get” the game, as there’s a lot of depth hidden inside the gameplay and the boss fight is not being particularly easy. The question is whether you are up for the challenge. If the demo a slice of what you can expect, then those who can play through it can do so in a nice looking fashion and expect a B-Flick type story. Players who aspire mastery will get a ton of value and playtime out of it.

We ;ook forward to our Review by Hovermask