Fire up the tractor, it’s time for Farming Simulator 2017!

So, you’re curious about Farming Simulator 2017, huh?  Perhaps you have a Nintendo Switch and need a break from Breath of the Wild or Mario Odyssey.  Maybe you have this feeling that Farming Simulator 2017 falls so completely outside of your normal gaming tastes that it becomes this little question mark bubbling in your brain, slowly growing with increasing curiosity. For veteran sim farmers, this might be a look into having a portable version of the game to take with you while transiting back and forth from work or school.  In either case, is Farming Simulator 2017 something that interests you?  Would you enjoy it?  Well, it all comes down to how you like to spend your time and if you find the idea of running a farm to be a soothing experience.  Farming Simulator 2017, while being in a rather small segment of the gaming market, certainly has that covered if you are looking for a sim on the Switch.  The question is, what sort of Switch user will enjoy it? 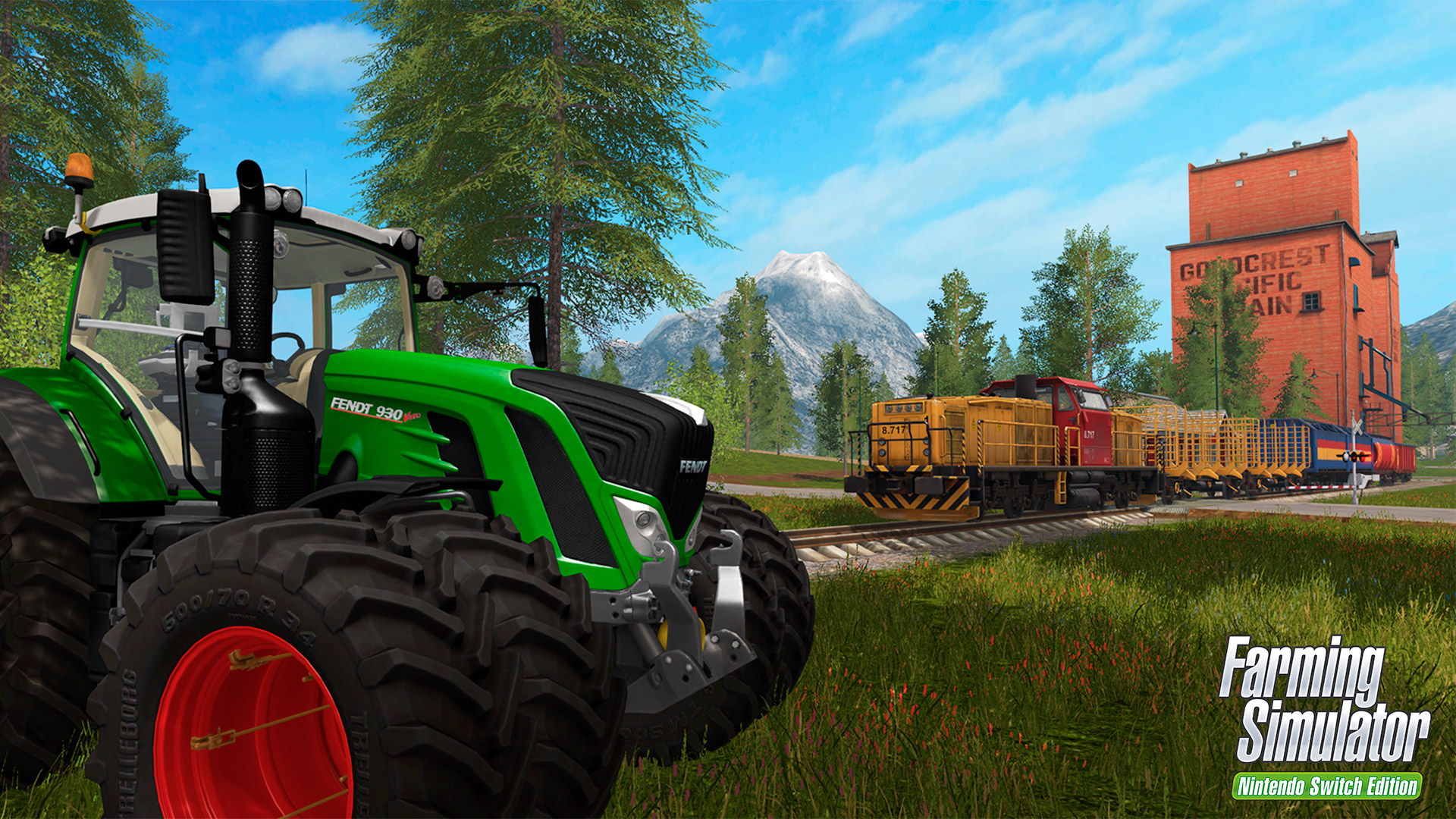 Myself, I fall into the category of someone who just has an itch to try something different.  Lately, it seems all I do is kill monsters or jump over puzzly platforms, I need something to break that up.  So, Farming Simulator 2017 is my first sim to be perfectly frank. This review will be more of an account of how I reacted to it as a Switch gamer with no prior experience in a sim game.  Hopefully, it helps a few people out who are on the fence about this game.  I also grew up on a farm, so I have an idea of what to expect to some degree.

From the menu I highly suggest doing all the tutorials first, perhaps even more than once as often I would find myself accidentally skipping a step like fertilizing my field.  You can do them at any time, which is very helpful to new players.  With these, you learn how to plow the fields, fertilize with manure, sow the seed, harvest, and then take the grain to be stored or sold.  You get to some introductions to root crops, oilseed radish crops to fertilize the soil, and even animal care for things like harvesting wool.  I can’t stress enough that these tutorials will be your only guide in an otherwise overwhelming amount of action sets to perform in order to harvest a crop or manage a farm.  The game is almost too thorough.  I can definitely see many folks just being clueless about what to do. 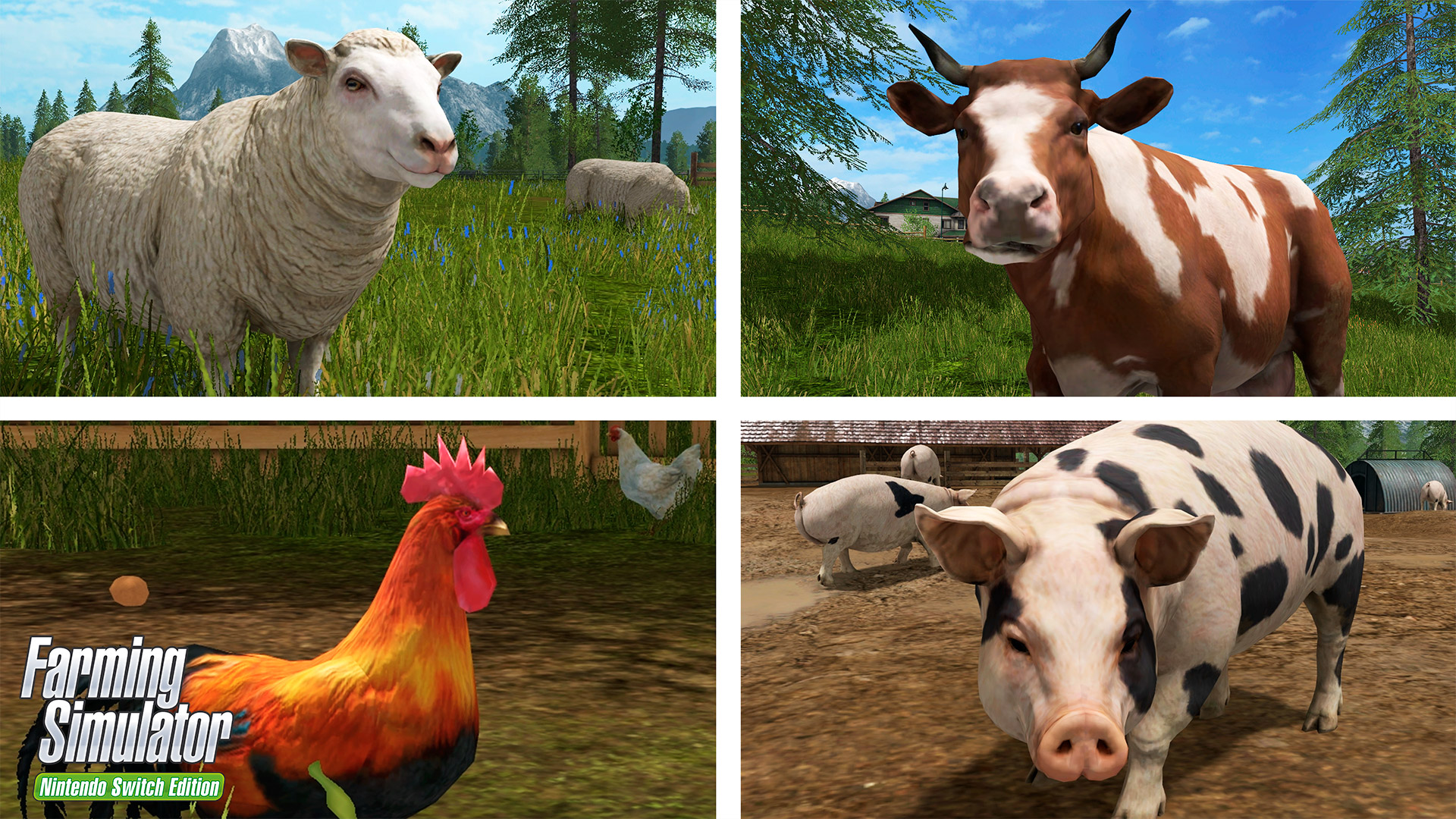 The game guides you through your first harvest and from there you can simply go back to your farm to start it all over again.  I found the act of driving the tractor fairly tedious, so I usually hired a worker to complete that task.  From there, I preferred to look over the micro-management aspect of purchasing new equipment and vehicles, checking on the livestock, and driving around town to see the other fields available for purchase.  The chickens were pretty neat as I not only found eggs, but also a gold nugget nearby.  Apparently, there a secrets to discover in the game, an added treat.

To get around the farm and the local town, you will need to drive. However, the vehicles are a bit crazy to maneuver around in. It felt a lot like a GTA style of driving but with the sensitivity cranked up quite a bit.  To my surprise, I could not run over people or destroy anything.  However, I definitely got my tractors jammed sideways to the point where I had to drive more tractors down there and knock them loose in a sort of demolition derby manner.  It wasn’t too annoying, but the first time I drove my tractor to get fertilizer equipment and then back to my field, I quickly realized I didn’t buy any fertilizer first. That meant an extra trip into town and time wasted. 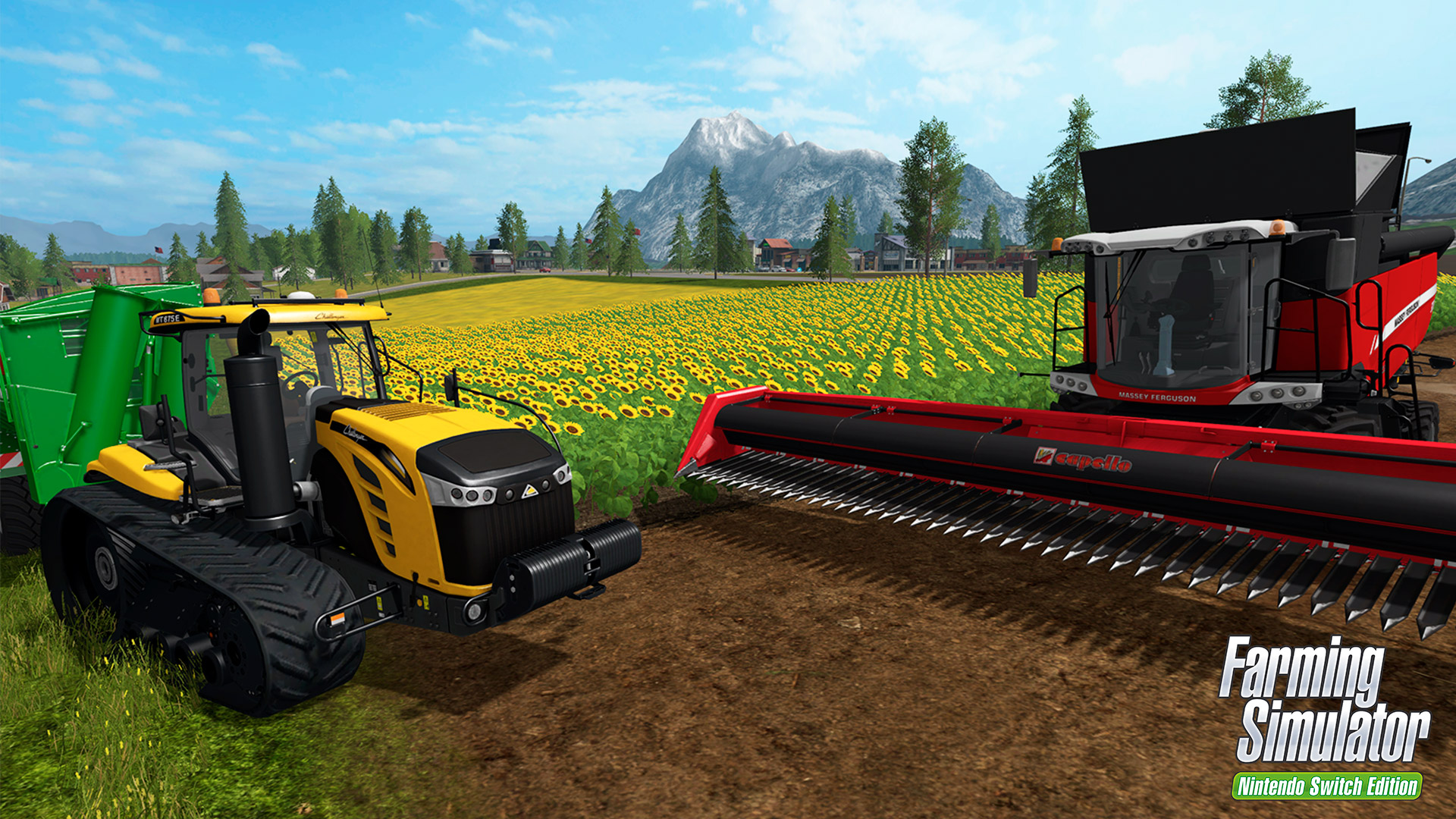 What should you plant?

In the menu you can explore what crops to grow such as canola, wheat, sunflowers, soybeans, and more.  There is also price state sheet to check what the prices are for certain crops and with that information, you can decide what to plant for the most profit.  Now keep in mind, if you constantly farm one specific crop, you’ll be undermining your own profits because there will be a surplus and prices will drop.  It’s best to rotate the crops well.  Another thing to consider is that price is not everything, yield also determines how much you make.  If you have a bad yield on a profitable crop, it could be better if you just stick with a moderately priced crop with a higher yield.  Yet, again, you can’t overfarm.  There is a balance to it in order to keep things profitable. 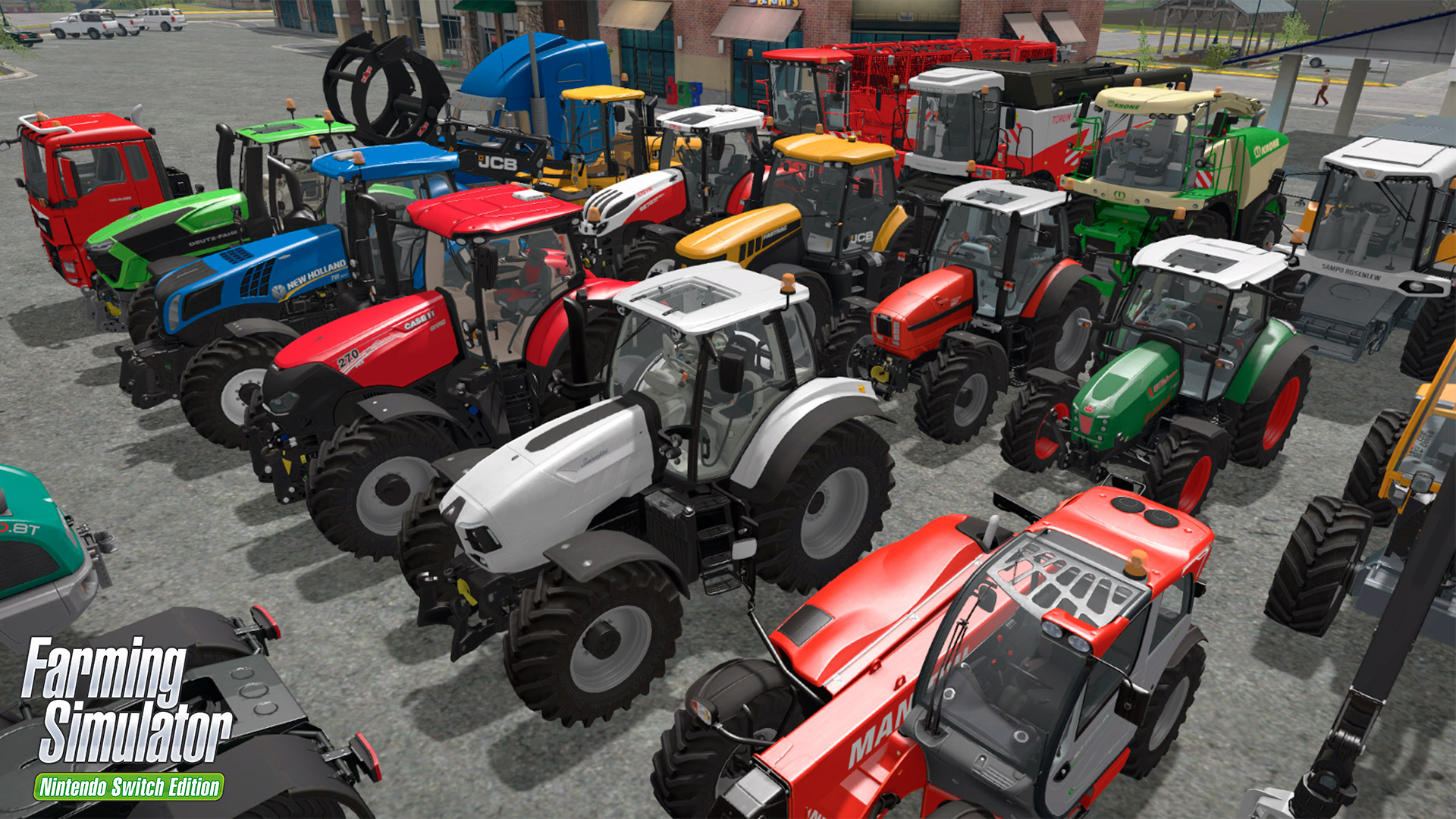 One of the first things you’ll do is cultivate your fields and get some seeds sown to begin a crop.  You’ll need to do this repeatedly to get some money in order to purchase upgrades. To my surprise, there are a plethora of different tractors and farm machinery add-ons to choose from at the store in the town.  The biggest difficulty for me was getting the equipment on the tractor itself.  It was sort of like trying to carefully park a car on a crowded street in GTA. I spent what seemed like ages before I’d finally get something attached.  It was probably the most frustrating aspect of the game.  Once attached, I generally hired a worker to do the job of driving the tractor as before.  However, I found that if I didn’t line the tractor up correctly on the field, the driver would plow my field at a diagonal and skip a huge chunk of the field.  Also, any machinery I knocked around with my tractor got in the way of my workers and created a traffic jam at the edge of the field as they turned around to make another row.  I thought they would just go around it, but nope.

There are also missions to do for money and earn extra cash to run your farm.  Granted, that means you have to be able to perform the given task within a set amount of time.  If you can’t do that, it’s tough luck.  I failed a few simply because I either did not understand how come the tractor would not begin doing its action or because, for the life of me, I could not hook up the equipment to the tractor correctly. As I stated before when learning to attach things to the tractor, I’d waste valuable time trying to get things working and by the time I did it, I was out of time to finish the entire mission.  Also, fair warning that these missions can be time consuming.  If it says 45 minutes for the mission, realize that you will be sitting there doing that mission for that entire duration of 45 entire minutes.  Prepare to sink some serious time into this game. 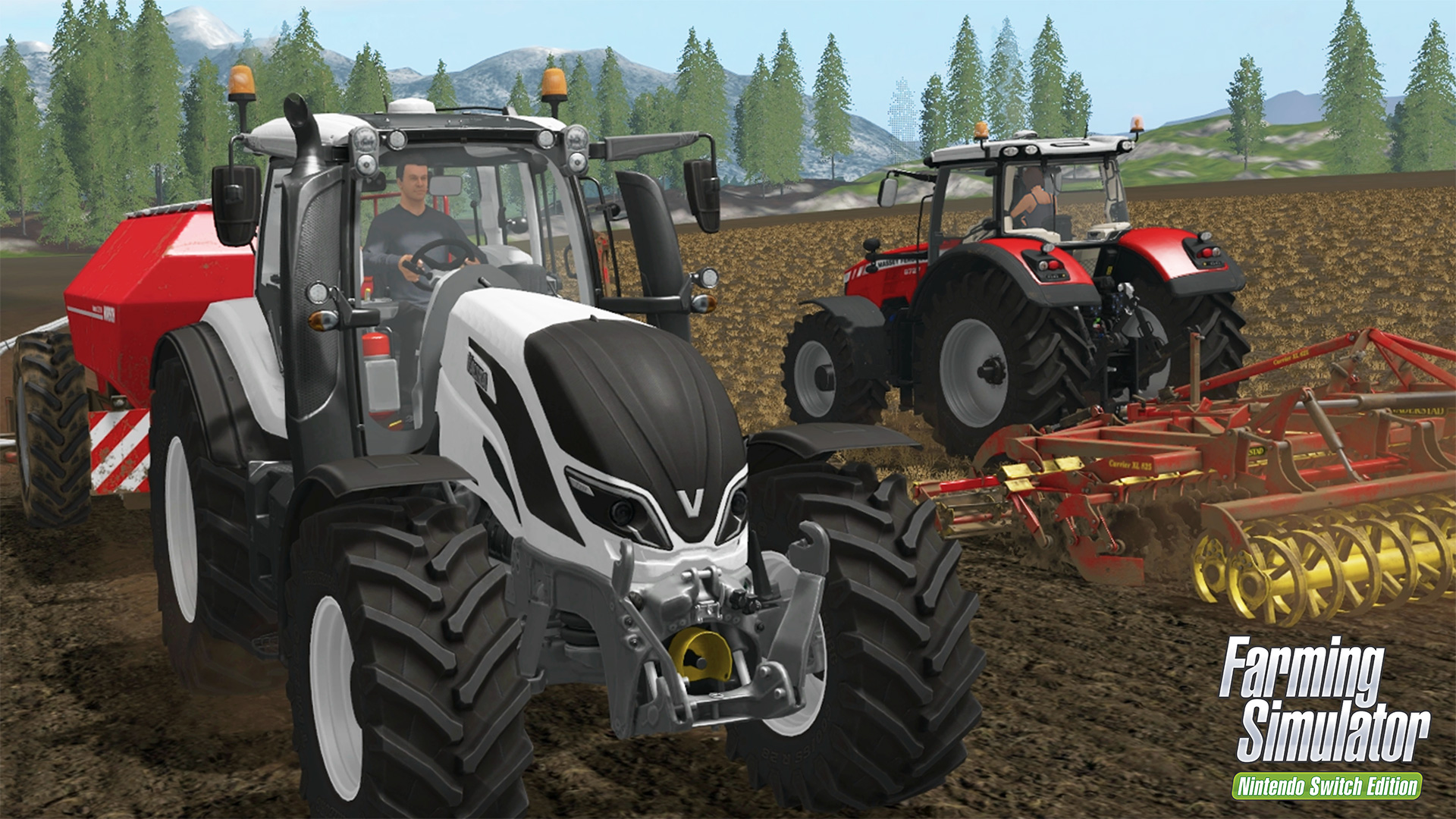 Well, I think it comes down to the type of gamer you are. I felt like a lot of the game was very repetitive and tedious, but that’s the actual idea around a simulator in the first place.  I can’t really fault a game for being that way since it’s aimed directly at folks who enjoy playing repetitious tasks.  With this said, if you are not the type that wants to spend a solid hour completing a mission by harvesting a single field, then I think you should look elsewhere.  For gamers who like the time killing aspect of maintaining and growing crops, then I think you’ll be in for a treat.  The big draw here from what I can see is that the game is portable, and I don’t think you’ll find a more detailed edition of Farming Simulator 2017 that you can simply take with you.  My only complaint when playing with the Switch in portable mode was that the text boxes were incredibly tiny.  I wear glasses and squinting to see the tiny text was less than appealing, especially on the map.  For the most part, I played on my TV.  This, however, depends on how well your eyes are.  Mine need all the help they can get.

For the casual gamer, I can’t see this as being a game you pick up and go with, but for the current farming sim fans who enjoy this type of game already, this is a great game for the portability factor alone.  It ran very well on the Switch with no hiccups to report after several hours of game time.  The graphics are not quite as pretty as other versions on PS4 or PC.  There is some low detail level graphics throughout, but the absolute dedication to the realism of farming with the equipment and farm life is very well done.

I think the only thing it was missing was the fear factor.  Yes, I said fear factor.  Folks do not realize that living on a farm in real life is very dangerous!  In this game I didn’t encounter all the things I remember growing up with; coyotes killing the livestock, rattlesnakes sneaking into the tractor or in our bedrooms, wild boars attacking my dogs, bats infesting the barn and flying into the house, floods ruining the crops, insects eating all the grain you just harvested, droughts, cows escaping the farm and chasing them back over the fence, cows using their horns to attack us ( got my Dad in the face ), scorpions hiding in your shoes and stinging you.  I mean, it’s just endless.  If some of that reality was in the sim, I think it may garner some more players because most people don’t realize that real life farmers often play a game of survival just to make a living.  Now I played for several hours, so perhaps those events occur with more time put into the game. From what I could tell, the game is more about crop rotation and maintaining a farm and keeping it profitable by selling good yielding harvests with good prices 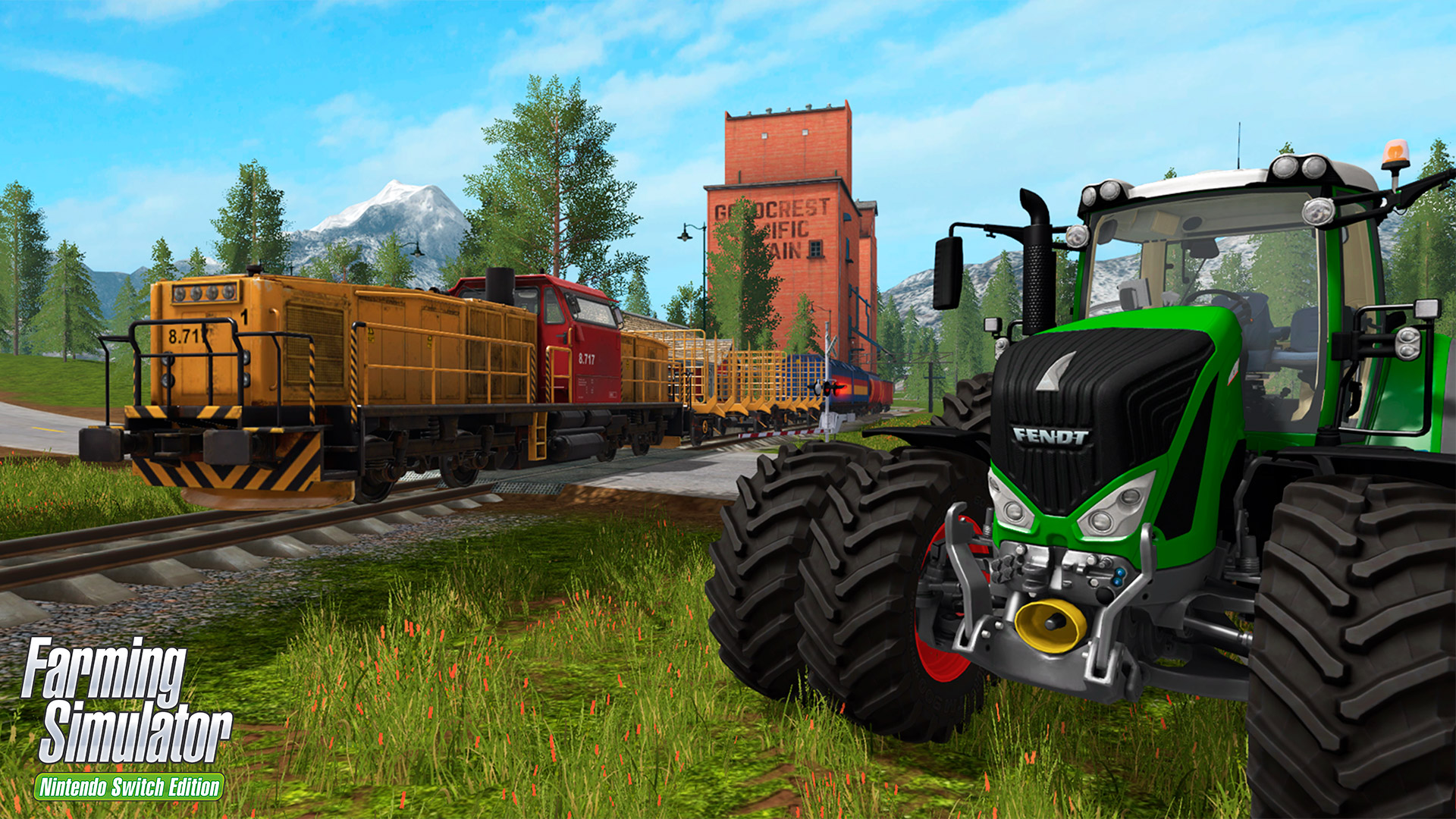 In the end, Farming Simulator 2017 is well done and very detailed in its gameplay.  I think it’s best for those who really enjoy sims because even if you like Stardew Valley, this is a lot more involved than you may be expecting. If you get this game, go in knowing you are about to dedicate a huge number of hours to it.  It’s not as casual as I was hoping it would be, but I can definitely see it as a game I’d leave installed and play from time to time.  I never found it relaxing, but I can definitely see it as a type of game that can get addicting once you get past the idea of how long it will take to play it and the repetition.