Gear up for more epic destruction.

Previous titles in the MechWarrior franchise used to start with a campaign, followed later by a “Mercenaries” expansion. Is MechWarrior 5 doing things in reverse, releasing a story campaign after the Mercenaries content? Well, yes and no. I will explain what exactly is the Legend of the Kestrel Lancers DLC, how to access it, and whether or not it is worth getting.

Legend of the Kestrel Lancers adds three new biomes: jungle (plus swamps), some sort of canyon spires, and huge megacities for epic urban warfare among skyscrapers. There are also new quest missions that pop up on the Starmap, and most importantly, a new campaign. But that campaign is not a separate entity from the mercenaries outfit. It behaves more like an enhanced quest that you can choose to take for many missions in a row. There are two ways to access it: one is to keep playing your initial Campaign until you come across the missions, or the second way is to do a Kestrel Lancers (or earlier) start in Career mode. The Career mode can give you a starting outfit with a few BattleMechs and pilots, but then you will be vastly underpowered when the Kestrel Lancers campaign is in full swing. A proper alternative is to do a Kestrel Lancer start while importing your outfit from an advanced point in your Campaign if you already have plenty of heavy hitters ready to roll. 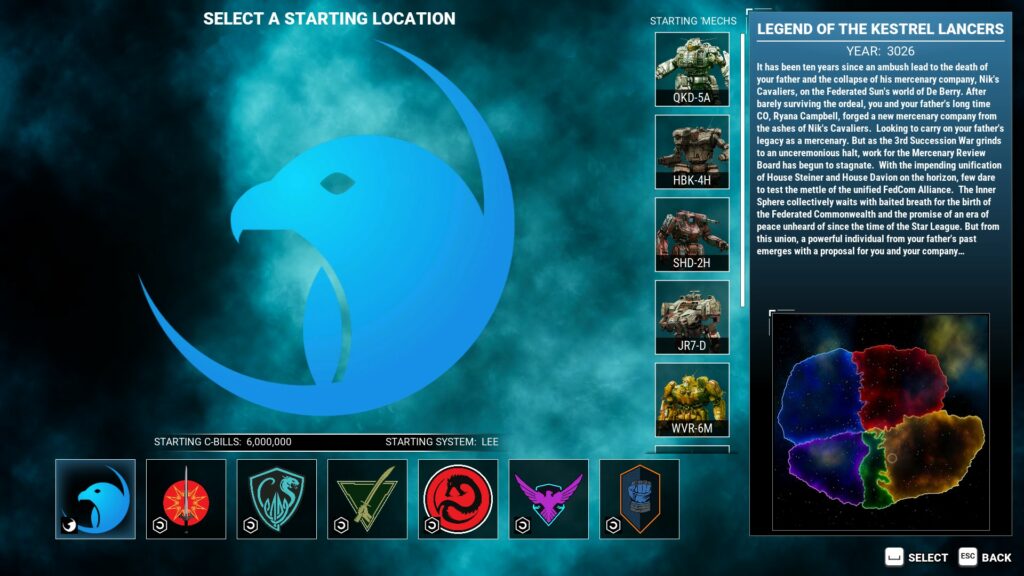 When It Takes Place

The original Campaign starts in 3015. You receive the call for the Kestrel Lancers campaign in 3026, which is the Kestrel Lancer starting point in Career mode. Spending 11 in-game years on grinding the repetitive procedural missions can seem a daunting prospect if you only wanted to play the Kestrel Lancers campaign (that’s roughly 50-80h of play until you reach that point). Annoyingly, in 3026 you only get two missions, an appetizer, and then you have to wait again 2 years for 3028 to unveil the actual Kestrel Lancers campaign as a contract for Davion. So, if you were hoping for an independent linear campaign that you can launch at any time, you are out of luck. Still, the advantage is that this campaign can be part of your own story, with your ‘Mechs and your pilots, and the spoils of war contribute to your war chest. 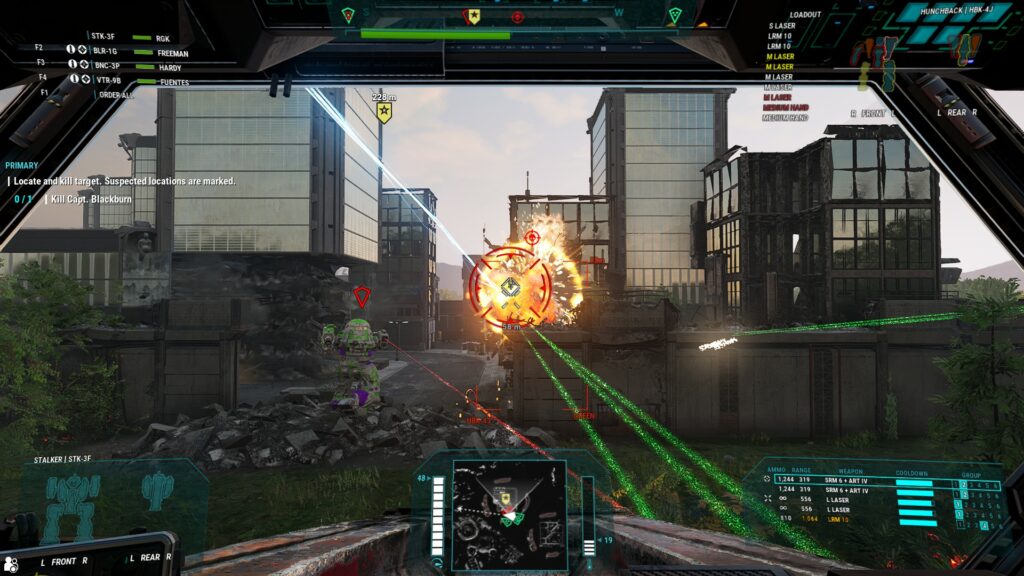 The Core Remains the Same

MechWarrior 5 begins as a meatgrinder. More than a late-game campaign, it needed a better early-game campaign to receive more pilots and ‘Mechs before setting off for the stars. I have a love-hate relationship with this game. I am frequently annoyed by all the hurdles in my way. Travel across the systems is incredibly expensive, refitting and repairing ‘Mechs takes an eternity, the reputation system makes it hard to get a lot of salvage shares (especially the quests for new stakeholders), the bases to destroy can take ages to raze, the artillery barrages are a pain (even worse when they are not available as targets), the tonnage limit is an artificial number to prevent the player from coming down too hard on some missions (why not instead push for runner missions in Light ‘Mechs or something?), etc. But it’s also a very appreciable simulation, fully customizable with mods (Nexus mods or the Steam workshop) to touch up the balance, the HUD, and more, molding it into the perfect MechWarrior of your dreams. And when MW5 delivers its brutal combat among those gigantic tanks as tall and graceful as buildings, wow does the game shine, and I love it. Kestrel Lancers goes above and beyond what MW5: Mercenaries proposes. It is peak MechWarrior. 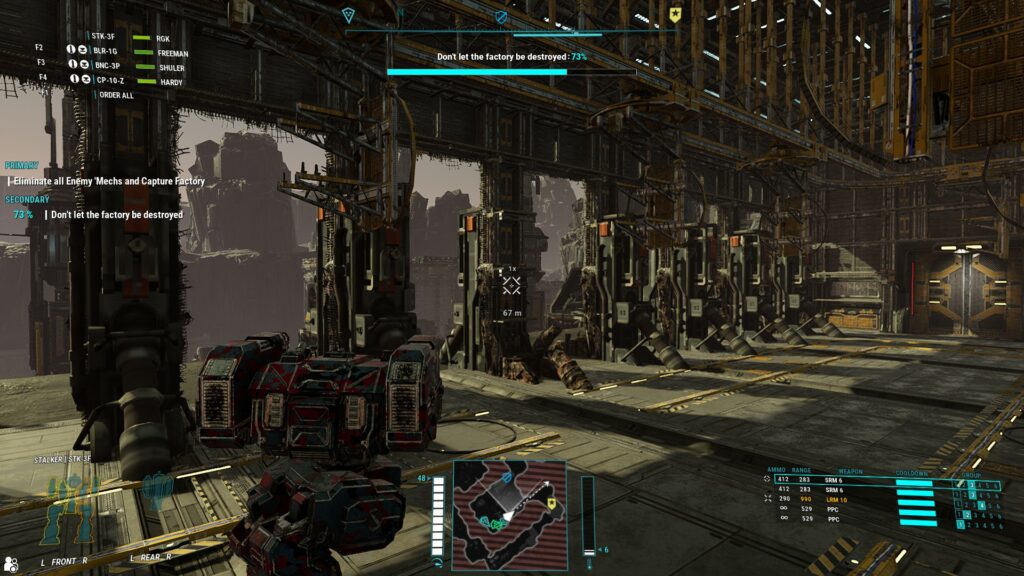 The new Kestrel Lancers quests in the Starmap are already quite fun, with some missions in valleys, ravines, and canyons: many linear and intricate locations; a nice change of pace from the procedural desert plains. But then the Kestrel Lancers campaign itself offers a variety of hand-crafted levels with wholly original battles! There is an assault inside a factory, with the local equivalent of jump-scares leading to close-quarter combat in destructible environments! There are ambushes in the jungle! The inside of a derelict spaceship to defend! Hit and run missions across megacities! Fortresses to assault! There are additional AI allies to increase the sheer scale of the battles, and the missions provide a lot of recorded lines and chatter between the characters to reinforce the immersion and the sensation that you are taking part in exciting operations. There are complete story arcs to follow, from planetary invasions to being grounded and trapped in hostile territory with no communications to the outside. Many war crimes will be committed. It took me roughly 5 hours to complete the campaign, and those were my best hours by far in MechWarrior 5, and probably in any MechWarrior. 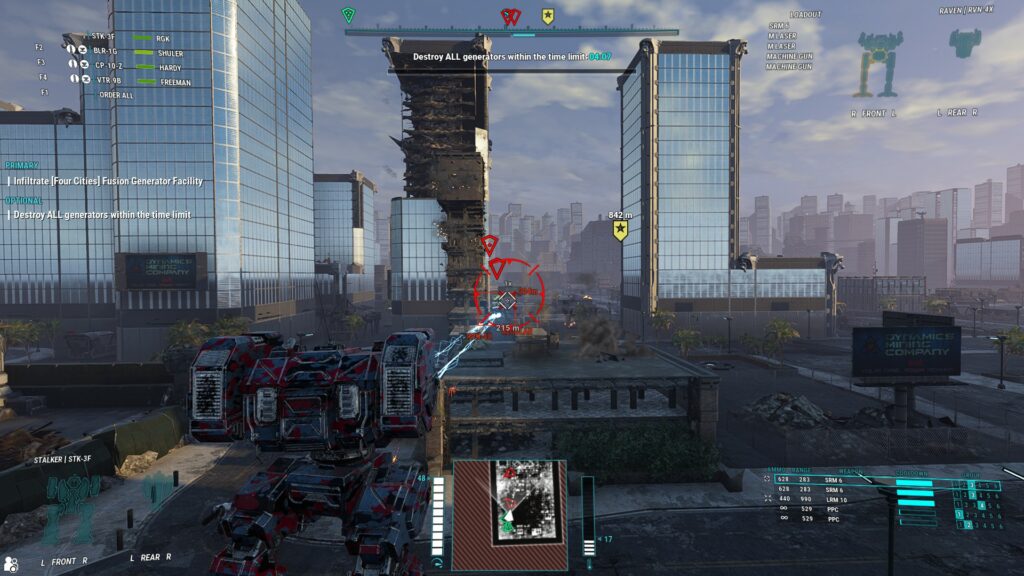 The perk of the campaign is that it is focused on the battles, without the need to manually jump from one star system to the next. However, please be aware that there is very little time to perform repairs in-between missions. There are between 15 to 30 days of downtime, so it is still possible to keep in shape through a rotation of the ‘Mechs in-between the mission. But try to avoid receiving too much damage. At first, I thought that I would hate this system (I avoid and loathe the “several missions in a row” contracts in the Starmap), but there is just enough time to perform the repairs, so there are high stakes, while still having enough leeway not to turn this into frustration. 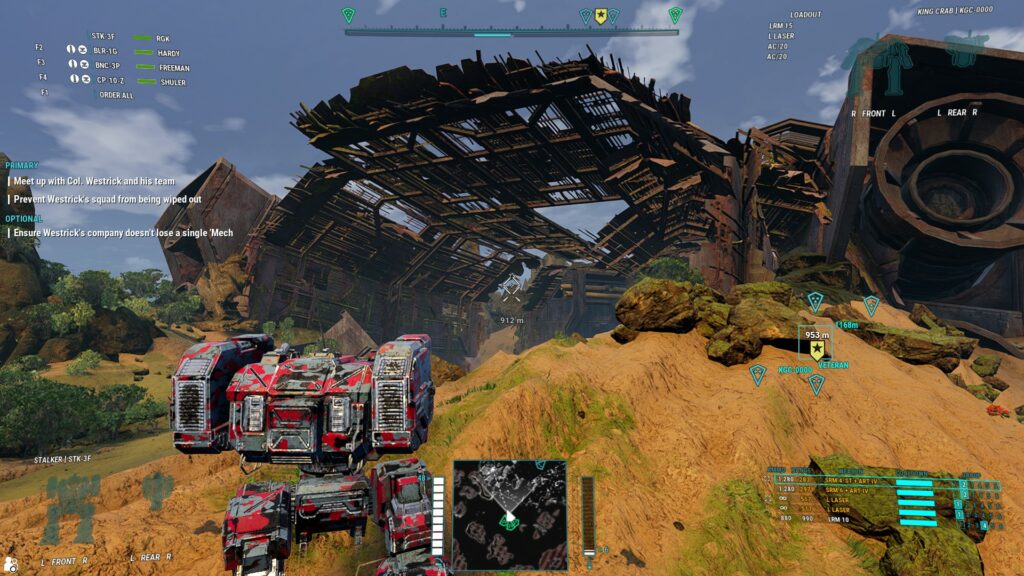 The Kestrel Lancers campaign is not an independent campaign, it is instead a late-game apotheosis. Because of that, if you are not on board with MechWarrior 5: Mercenaries’ grindy foundation, the Kestrel Lancers won’t be enough to convince you to jump in. However, if you enjoyed the base game and an even better experience appeals to you, then this expansion is an epic blast worth its hefty price.